Over the years, I’ve watched a few runway shows online or have looked at stills in books or magazines. As my personal style developed, I’ve gotten more in-tune with which designers I like and gravitate towards, and each season I’ll sit down and look at their shows. Unfortunately, I’ve never had a chance to go to a proper runway show and see it in person. The realm of garments I deal with has one foot in “streetwear” and the other in what can be called “fashion” (that word has always been a very broad and vague word to me). Interestingly enough, we live in a time where many of those lines are blurred and have been for a few years. High fashion houses have borrowed from the streets, and streetwear – hell, everything style-wise is influenced by the streets one way or another, and independent streetwear brands have taken cues from fashion houses. The Yeezy x adidas invitation popped up somewhat out of the blue and we had to confirm within a day that we would be able to attend the show, which was the following week. When we got to our hotel, we saw the invitation, which I’m sure many of you have seen is a Tyvek anorak. A very ill idea and unique take on the invitation, it had all of the information printed on the sleeve and had our seat assignments and name printed on the package. It was ill to see that Vanessa Beecroft was also going to be doing a performance (which I later found out her feature wasn’t her doing a piece, it was her choreographing the show). If you’re not familiar with her work, I highly recommend looking her up. 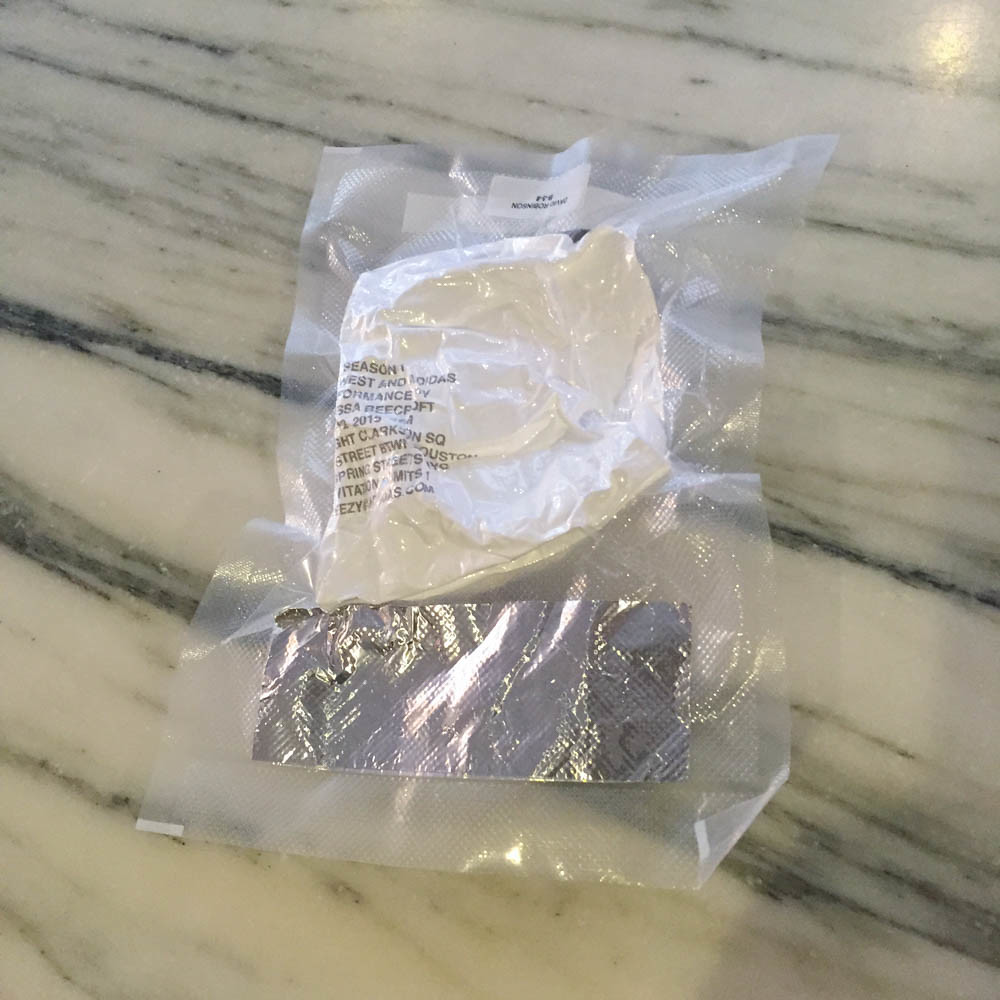 We had just enough time to check in, get our invitations, and hop in a cab to the show, which we knew would be crazy. This was just a portion of the line to get in below. Fortunately, we saw our adidas rep, and, with the invitation in hand, we were able to avoid this. 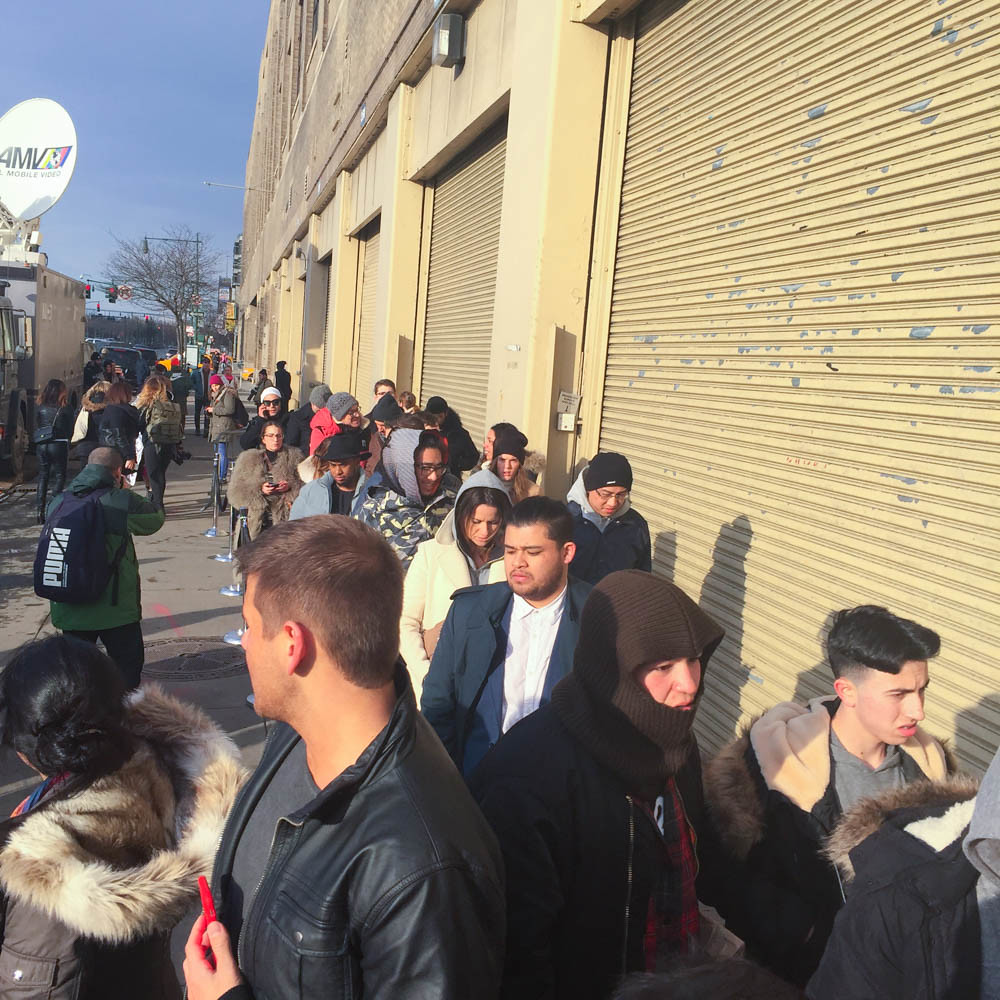 We then got to the main line of people that were cleared to come in and were confirmed invited guests to the event. Looking around the line, I did see a few familiar faces that I’ve seen in past street style posts during various other fashion weeks, musicians, and models. 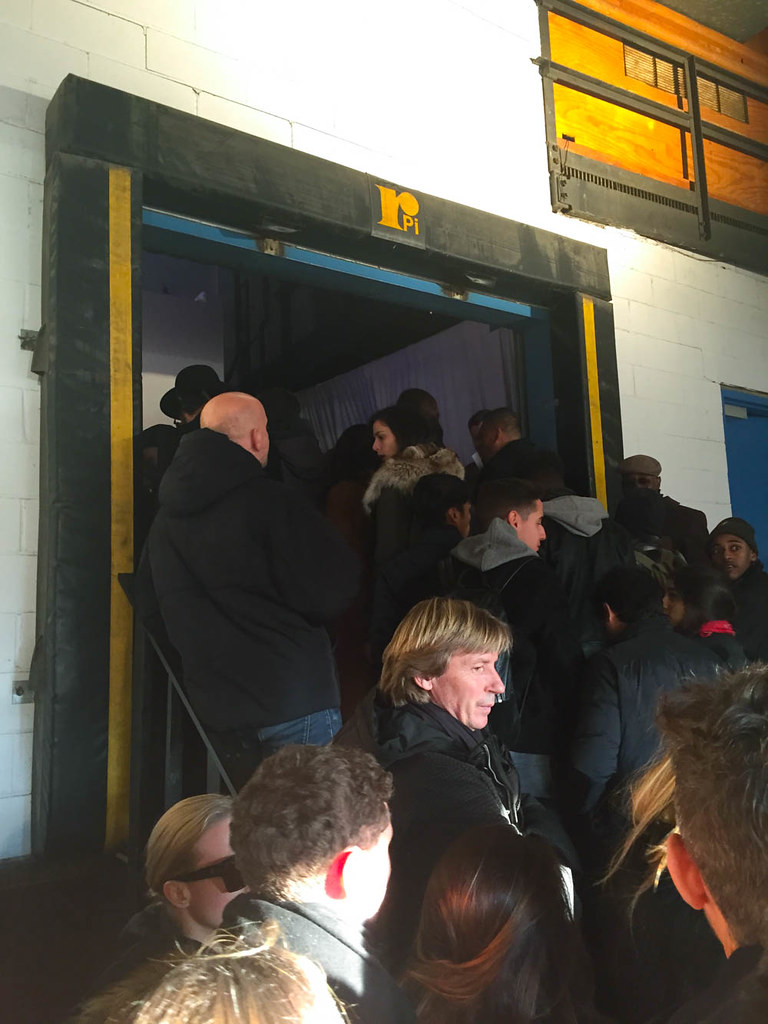 Once the line got moving, we were finally able to get in and try to figure out where our seats were. When we stepped in, the lights were dimmed and as we were being led to our seats, I glanced down and thought to myself, “That looks like Alexander Wang. Oh shit, that is Wang.” I was thinking we were going to maybe have standing seats in the back or to the side, but we finally sat down in the third row. I was just happy we weren’t standing. I looked to my right and I saw Pusha T and Big Sean and a white dude sitting next to him. I heard a voice say, “Here you go, cousin!  Now you gotta swap out!” I looked up and was Kanye handing a pair of Boosts to the white dude and I realized it’s Justin Bieber. I saw all these flashes and looked forward and saw Rihanna in front of me, about to sit down next to Wang. I then looked to my left and saw the homie, Easy, and Travis Scott, then I saw Beyonce, Jay, Puff, and Cassie sit down next to Rihanna, and next to Beiber, 2 Chainz sat down. That’s when Saint Frank, who I was out there with, leaned over to me and said, “We’re going to be in the background of a lot of photos.” 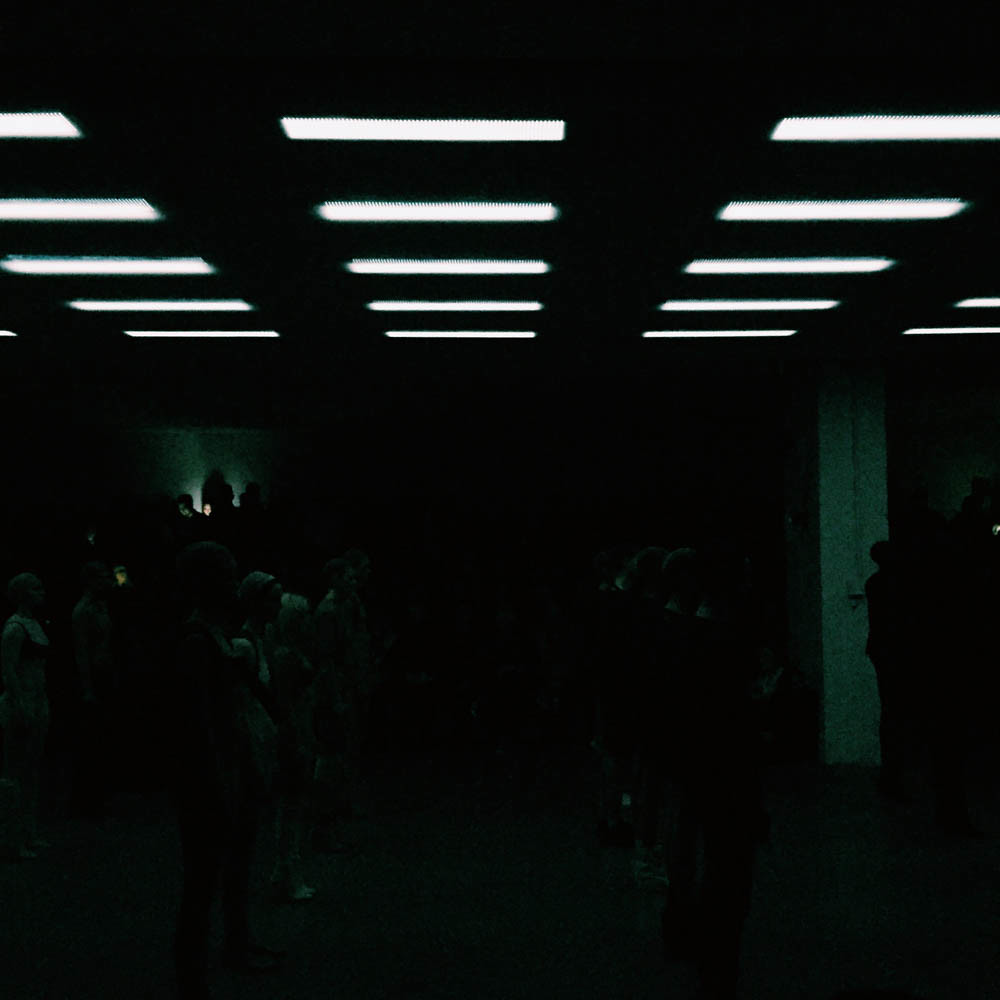 I’m sure many of you have seen the video of the show, so I won’t give you a play by play. Just a light recap and a few thoughts from myself. 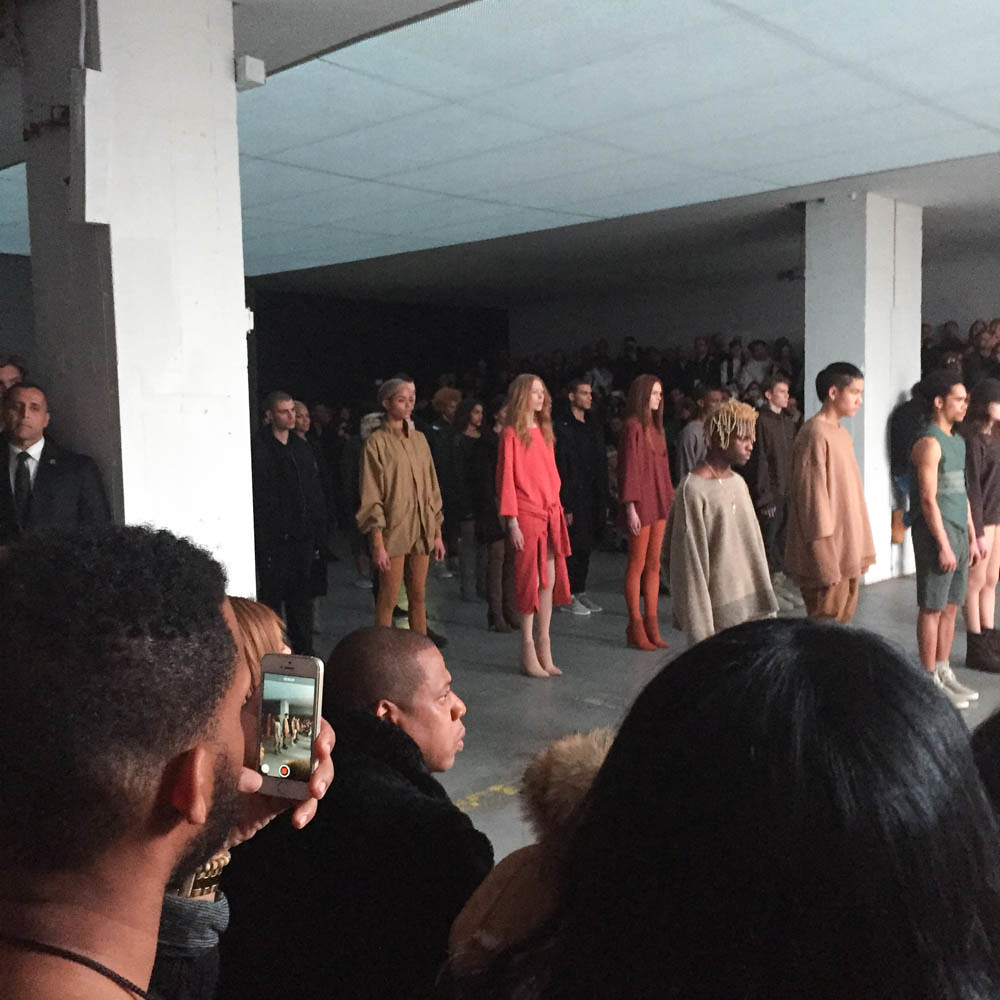 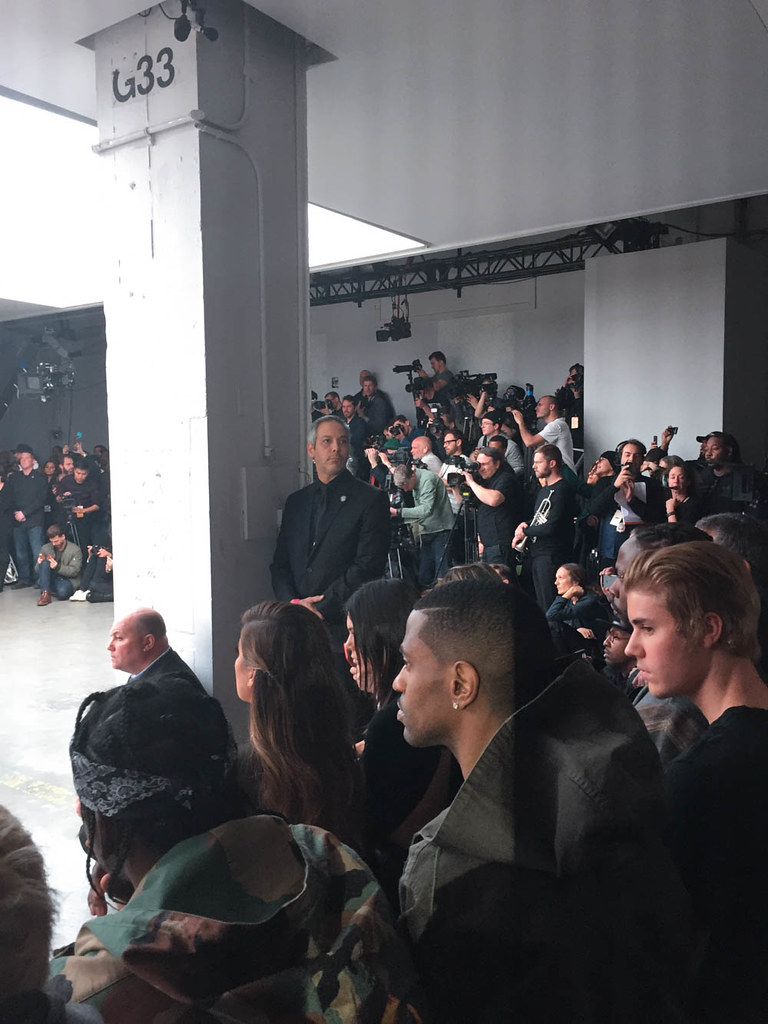 Pusha, Sean, 2 Chainz, and Biebs (in front of them is the Kardashians). 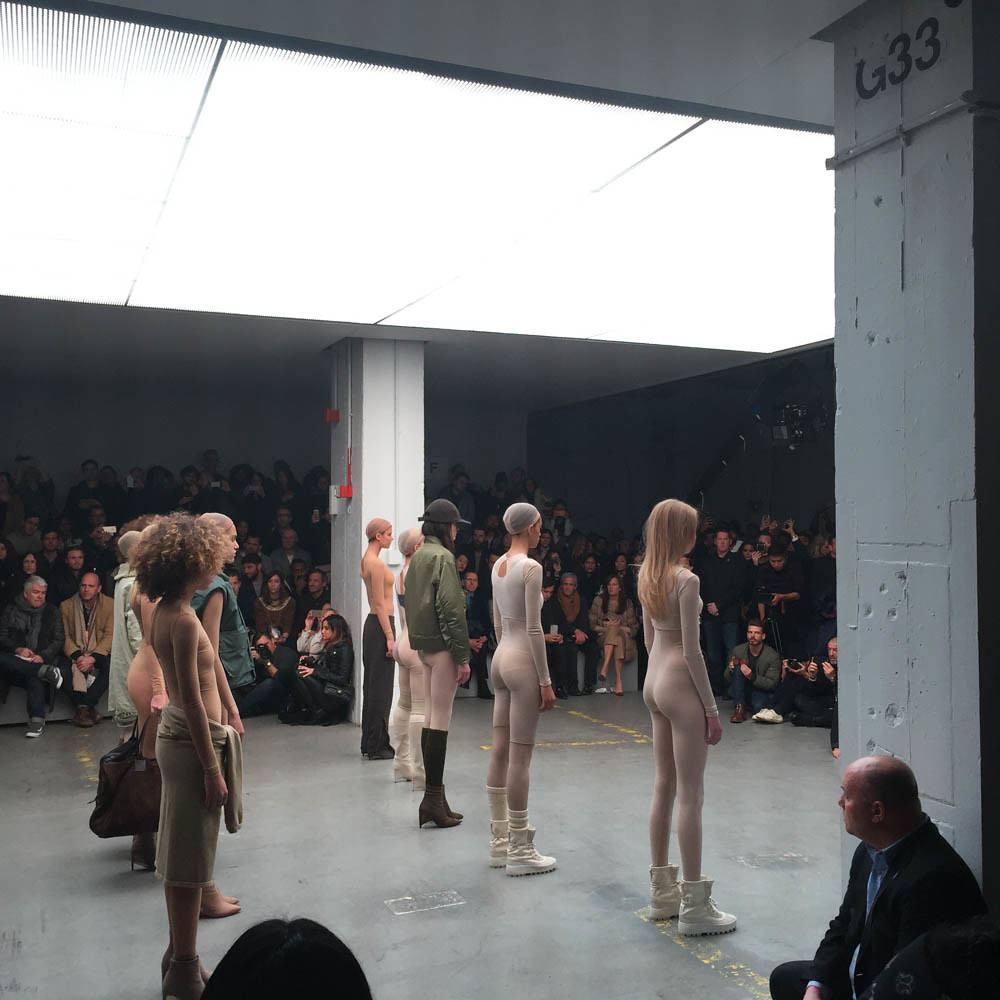 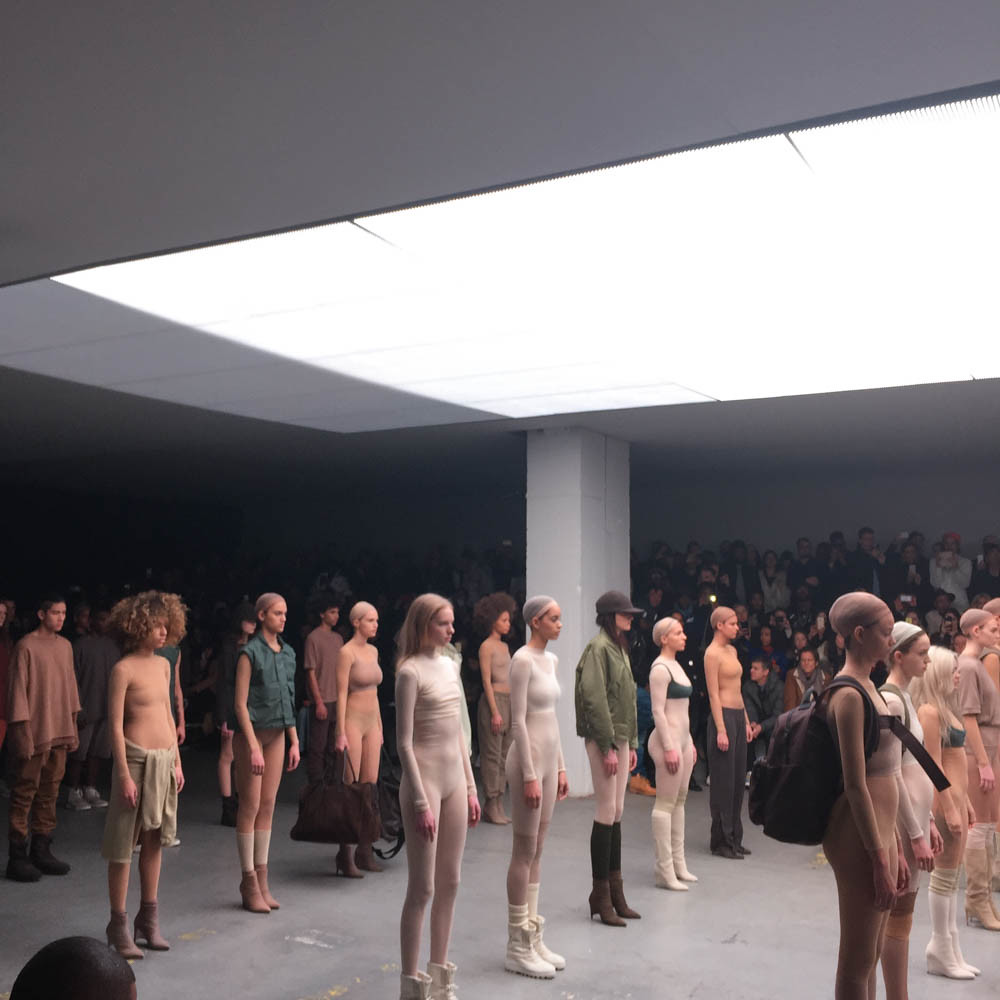 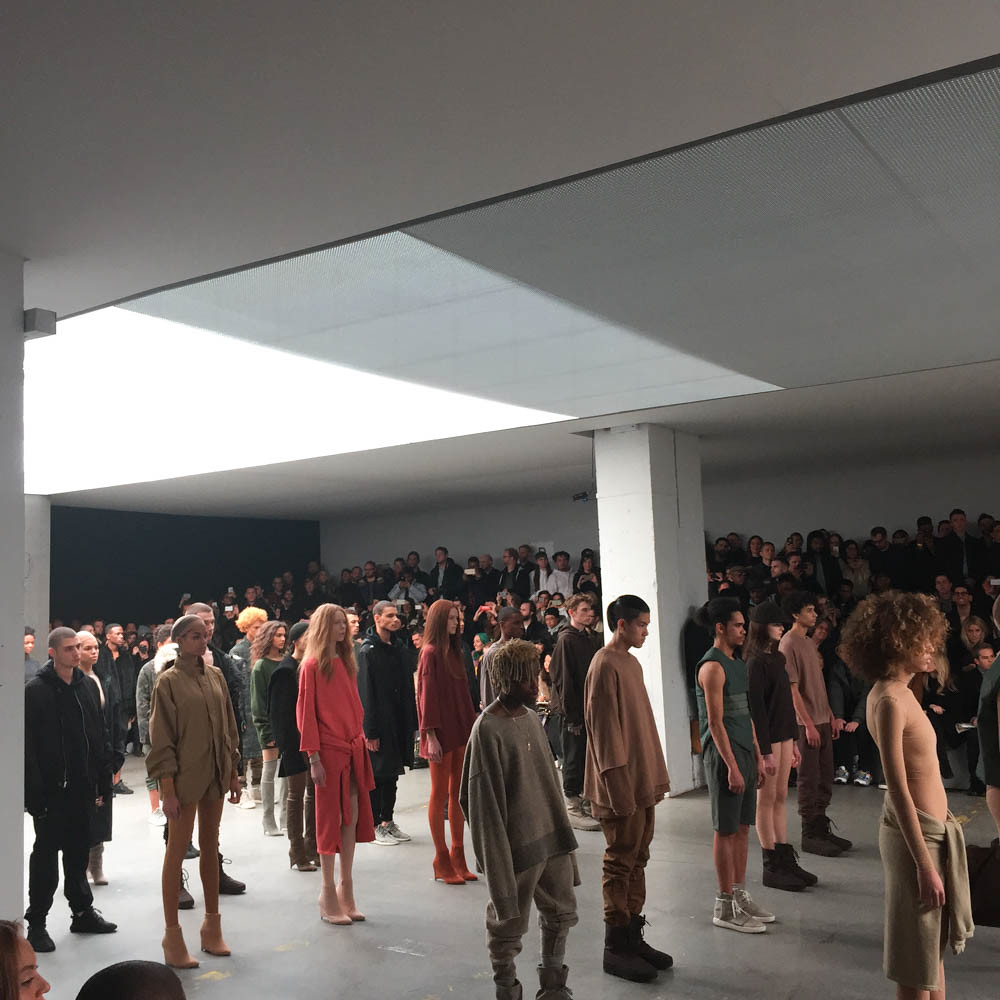 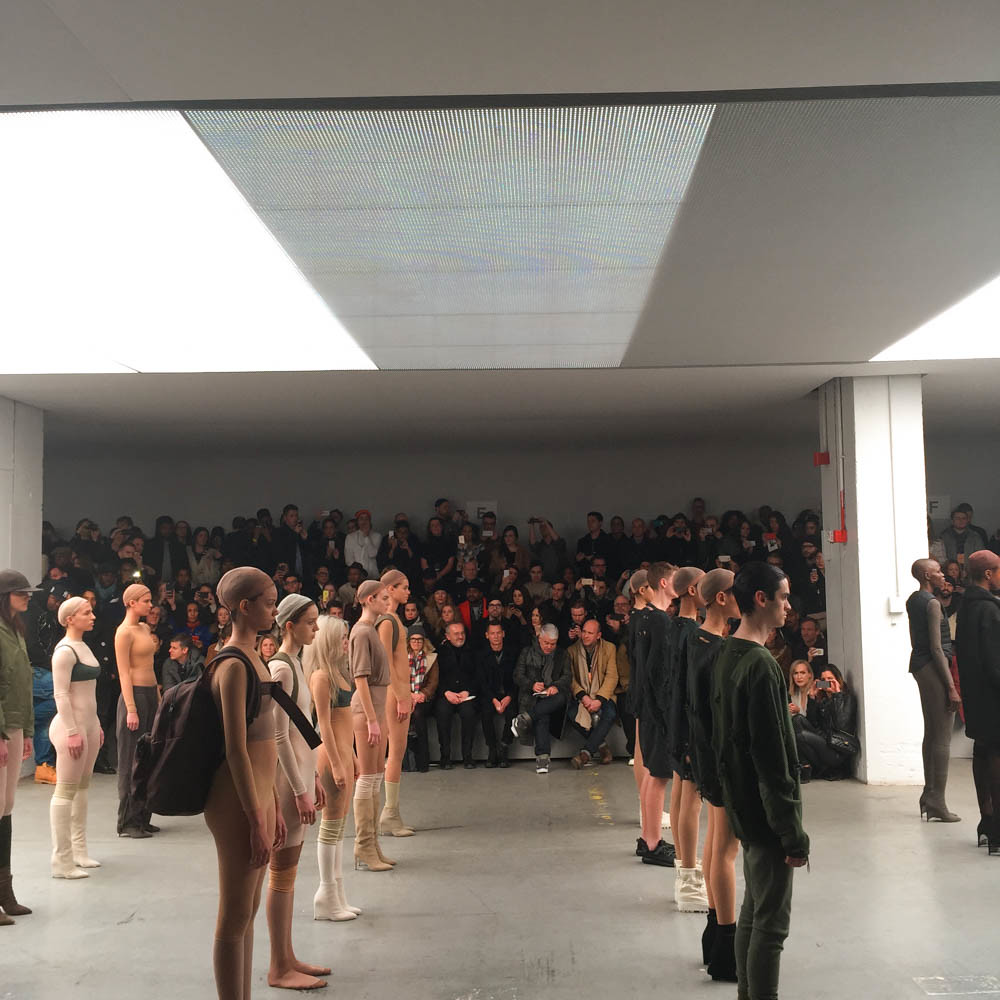 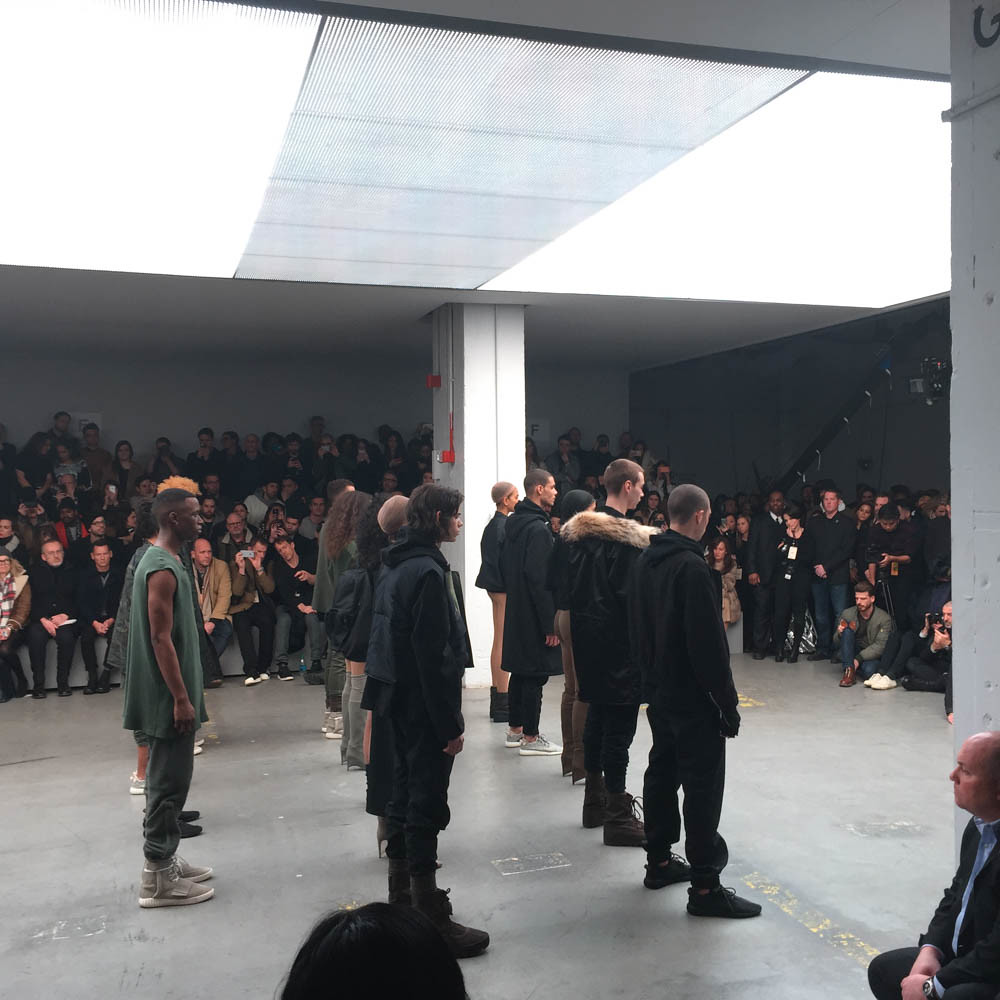 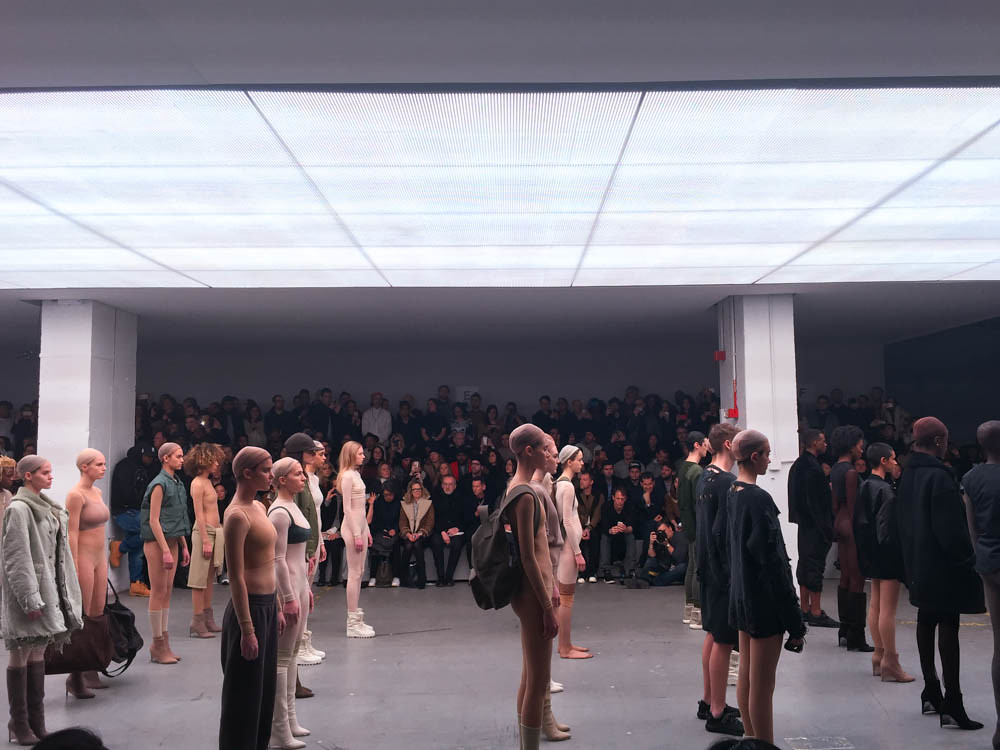 This photo is from Daily Mail UK’s recap of the show, one of a few photos me and Frank are in the background of. I can’t remember what exactly I was looking at while everyone else was looking to the left. 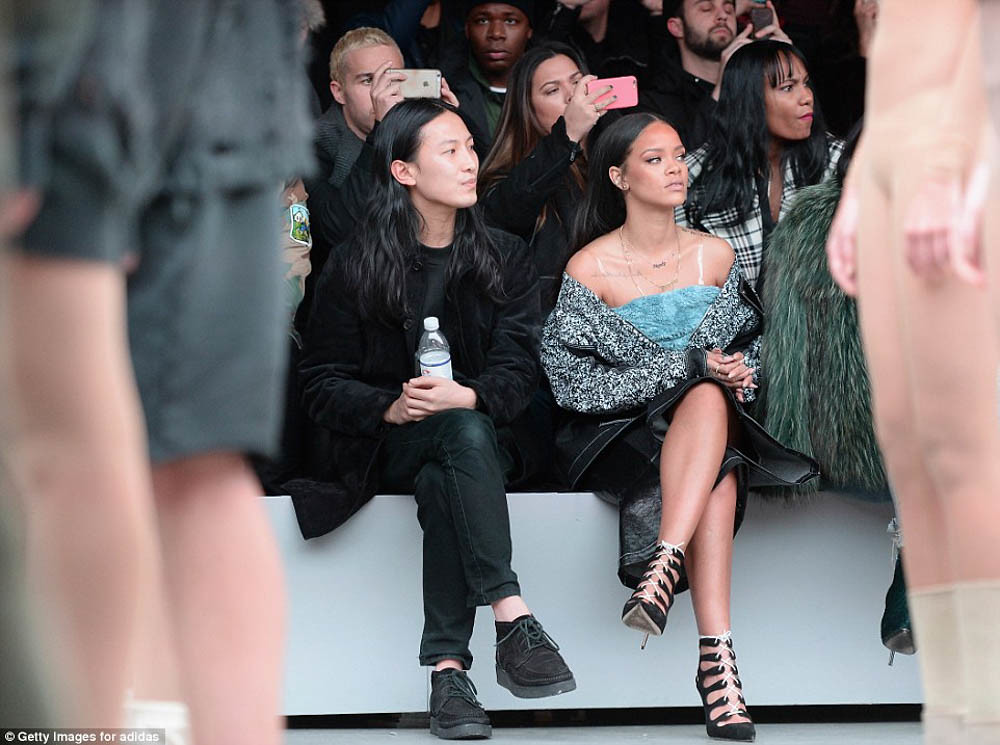 Off top, I’m happy for Kanye, Virgil, and the Donda squad. A few days prior, Virgil posted a photo of Kanye and Don each wearing their respective shoes, and I couldn’t help but think that it was such an ill thing for Chicago and for anyone, honestly; to be able to bring your thoughts/dreams/goals to fruition. To me, it’s further proof that you can do things your way without having to go the route other people plan for you. Whether you love or hate Kanye, I’ve always appreciated how he tries to advocate that you can do/be anything you want. You can bring the reality you want into fruition through hard work, making mistakes, and learning from them – or learning from others and staying true to yourself. As far as the collection goes, I really appreciated the color palette he used. I’m a big fan of the olive, burgundy, and sand earth tones he used. I’m a big jacket/outerwear person so I was peeping a few jackets I saw in the show. I wanted to see the pieces in person, off of the models, so I could examine the fabrics used and the weight of the garments. We had an appointment to stop by the showroom and examine the line, but that had to be postponed due the the garments still being photographed. I’m curious what his next season will look like and when the low top shoes in the show release. Thank you to adidas, Kanye, Daniel, and Virgil for the seats and the invitation.