The Kings of Call :: Who Were the Jerky Boys?

The ‘90s were a weird time. For example, there was a musical police procedural on TV for a bit called “Cop Rock.” There was a movie titled Junior where Arnold Schwarzenegger got pregnant. Boys wore snapback hats backwards and pulled just a little bit of their hair through the opening. Girls wore tiny butterfly clips that looked like huge lice. Listen, you kinda had to be there, but just trust me: things were ape shit. And there might not be a better example of just how insane it was than a comedy duo from New York that were, at one point, on top of the world. Their name was The Jerky Boys.

When a young Johnny Brennan started making prank phone calls in the ’70s, I doubt he had any idea of where his nefarious hobby would lead him. And for good reason. Who gets famous from prank calls? It’s not like a middle school Michael Jordan realizing he’s good at basketball or Kanye West first using an MPC and thinking, “Wait a second, I should produce music.” Some might even argue that being a dude who used his day off of a construction site to call auto mechanics and give them endless problems makes you kind of a piece of shit. But in the 1990s, not only did we let it pass, we made Brennan the biggest thing in comedy. 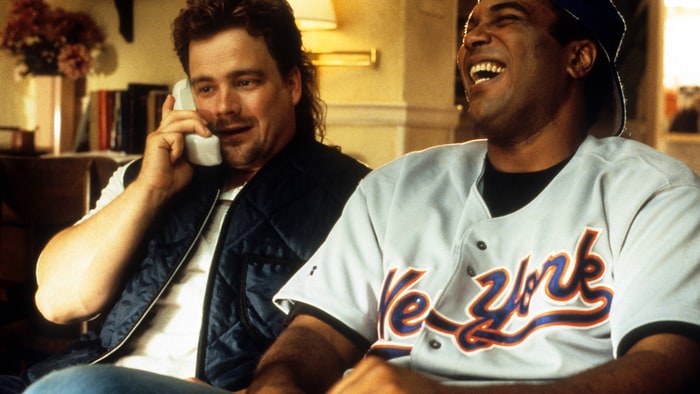 In the late ’80s/early ’90s, when Queens-native Brennan teamed up with another prankster named Kamal Ahmed, The Jerky Boys (a name coined by Brennan’s mom) were born. Brennan had already amassed an impressive collection of calls perfecting characters like Frank Rizzo, a foul-mouthed Italian-American who made ridiculous requests to businesses, and Sol Rosenberg, a stereotypical Jewish New Yorker who lived in fear of every possible disease (and just needed to find his glasses). Throw in some of Ahmed’s work (my favorite was Ali Kamal, the Middle-Eastern cab driver) and that’s how legends are made. These original calls were offensive, hilarious, and universally considered the best audio pranks of all-time. They started producing bootleg tapes of their work and distributing them by hand, creating a word-of-mouth popularity that had people dubbing copies for their friends and asking for more. But when the tape landed on the desk of radio giant Howard Stern, that’s when all hell broke loose.

After weeks of exposure through Stern, The Jerky Boys, in an unprecedented move, signed a record deal with an Atlantic Records subsidiary called Select, releasing their debut self-titled CD in 1993. It was a 21-track greatest hits compilation that included titles like “Firecracker Mishap” and “Egyptian Magician.” Not only was it well received, it sold over 2 million copies, making Brennan and Ahmed an undeniable comedy sensation. Fans were reciting jokes to each other like they were Richard Pryor punch lines or MC Hammer lyrics, T-shirts were being printed at record speeds and two guys making explicit (and no doubt racist and homophobic) prank phone calls were on top of the world.

Seth MacFarlane noted, “There’s more to the [Jerky Boys] characters than just a funny voice. They all come from a very honest place.” Brennan’s Frank Rizzo character is based on his father.

Their second album, The Jerky Boys 2, released in 1994, not only also went platinum, it was nominated for Best Comedy Album at the Grammys (it lost to George Carlin). As if this wasn’t enough, further cementing their title as the greatest prank callers of all-time, the following year they starred in their own scripted movie, produced by Touchstone Pictures, called The Jerky Boys: The Movie. It starred Brennan and Ahmed, in what would be the first time most fans saw their faces (they looked like if Mike Piazza and Frank Thomas lived in their mothers’ basements), and critics and filmgoers universally panned it. Way before its 9% Rotten Tomatoes score, it made Entertainment Weekly’s Owen Gleiberman call it “a comedy in which the comedians forgot to show up” during his F grade review. And maybe this was creatively the beginning of the end, but the tension between the two wildly successful jokesters hadn’t even begun.

A scene from The Jerky Boys: The Movie

They followed up the movie with The Jerky Boys 3 in 1996, The Jerky Boys 4 in 1997 (the same year Brennan appeared in Mariah Carey’s video for “Honey,” as if that makes any sense) and Stop Staring at Me! in 1999, without any of the praise or fanfare they had achieved for their earlier work. Fighting between Brennan and Ahmed became the focal point of their relationship; they were unable to even be in the same room come 2000, which led to Ahmed’s departure at the end of that year. Ahmed would release a solo record in 2000, Brennan would drop The Jerky Tapes in 2001, but by the 21st century, they were an all but forgotten fad, like Beanie Babies or Spice Girls. 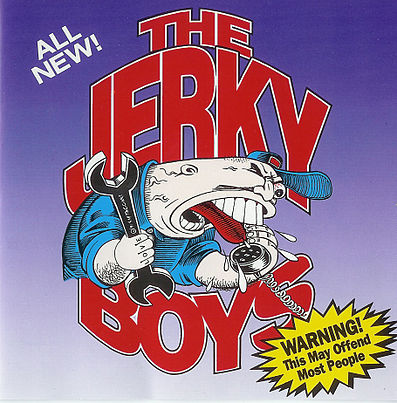 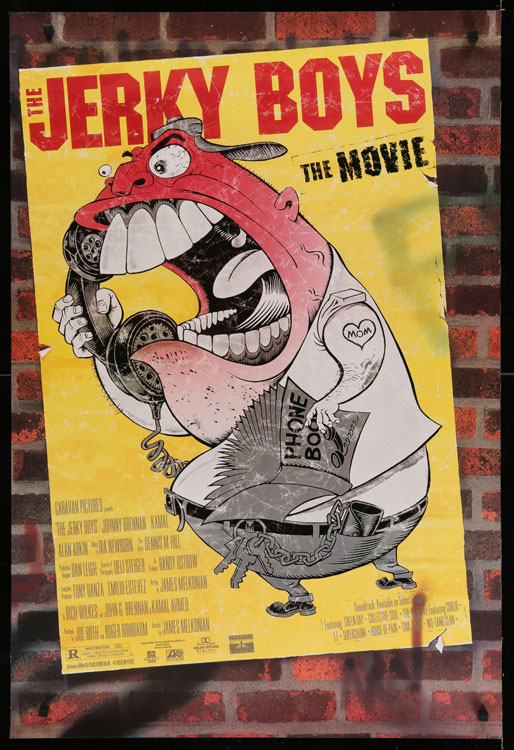 Like an Axl Rose for prank calls, Brennan owned the name Jerky Boys and as late as 2012 was still working under the moniker. In 2007 he released a solo album called Sol’s Rusty Trombone and won a Peabody Award for it. I’m fucking with you. He definitely DID NOT win a Peabody. Anyway, it was a collection of ring tones and skits and it started a slew of failed revivals that included phone apps and a deserted podcast that lasted only 17 episodes. Ahmed went on to become an independent filmmaker and directed The Piano starring Holly Hunter and Harvey Keitel. I’m fucking with you. He definitely DID NOT direct that.

Anyway, their disappearance makes sense, because by the time MTV introduced the world to Jackass (and Caller ID was invented) we were ready for a new comedy phenomenon. To call the Jerky Boys “lightning in a bottle” would be a bit of an understatement.

But the legacy of Brennan and Ahmed clearly lives on, with comedians like Amy Schumer and director Paul Feig citing them as inspiration. Super fan Seth McFarlane even hired Brennan to voice two of Family Guy’s most infamous characters, Mort Goldman and Horace the bartender. The Comedy Central TV show Crank Yankers, where puppets were used to visualize recorded prank calls, was so influenced by Brennan and Ahmed’s trailblazing work, I had to check Wikipedia 4 times to guarantee they didn’t appear on the show (they didn’t, but Good Charlotte did). Writer/Producer Jake Fogelnest, who lived in New York during the Jerky Boys boom explains, “The Jerky Boys were an interesting phenomenon because they were the first example of these counterculture pranks going mainstream,” mentioning the Tube Bar prank calls, Shut Up Little Man and Heavy Metal Parking Lot VHS tapes as their spiritual predecessors. He went on to tell me, “As a 12 or 13 year-old boy in New York, The Jerky Boys were the kings. They were as aggressively stupid as they were smart.” We both agree that it would be unfair to ignore the influence they’ve had on an entire generation of comedians. 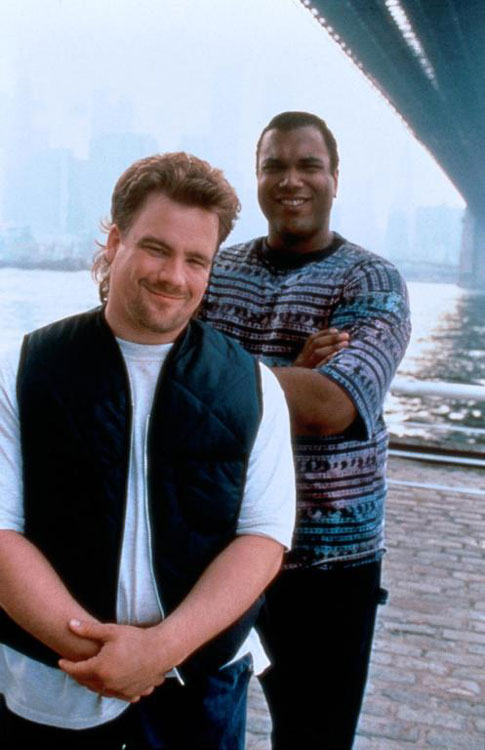 All of the Jerky Boys work is still available to hear through numerous online outlets in 2017, whether it be YouTube or Brennan’s TheJerkyBoys.com, a website he maintains with merchandise and unexplainable Jerky Boys branded gourmet foods (including steak sauce and hot salsa). A reunion appears to be impossible, as Brennan and Ahmed haven’t spoken in over a decade, a somewhat tragic and ironic end for two guys who got famous annoying people through communication.

I’m not even sure kids prank call anymore, and why would they? They can just dox some idiot and ruin his life forever. But I can’t help but miss a more innocent time. An era where you would just call some nerd from your high school and pretend to be a plumber who needs to know the size of his most recent shit. Listen, I wasn’t Louis CK, I was just trying to make a funny call. And so were Johnny and Kamal. And no matter what call I made, or anyone in the world has made, nothing will ever touch The Jerky Boys catalogue. I mean their phone calls though. I assume their salsa tastes like shit.

The Hundreds Fall 2017’s “Calling” graphic is an homage to the Jerky Boys, starring our mascot Adam Bomb on an angry prank call ready to blow. It arrives on a Champion crew-neck pullover and a graphic T-shirt. 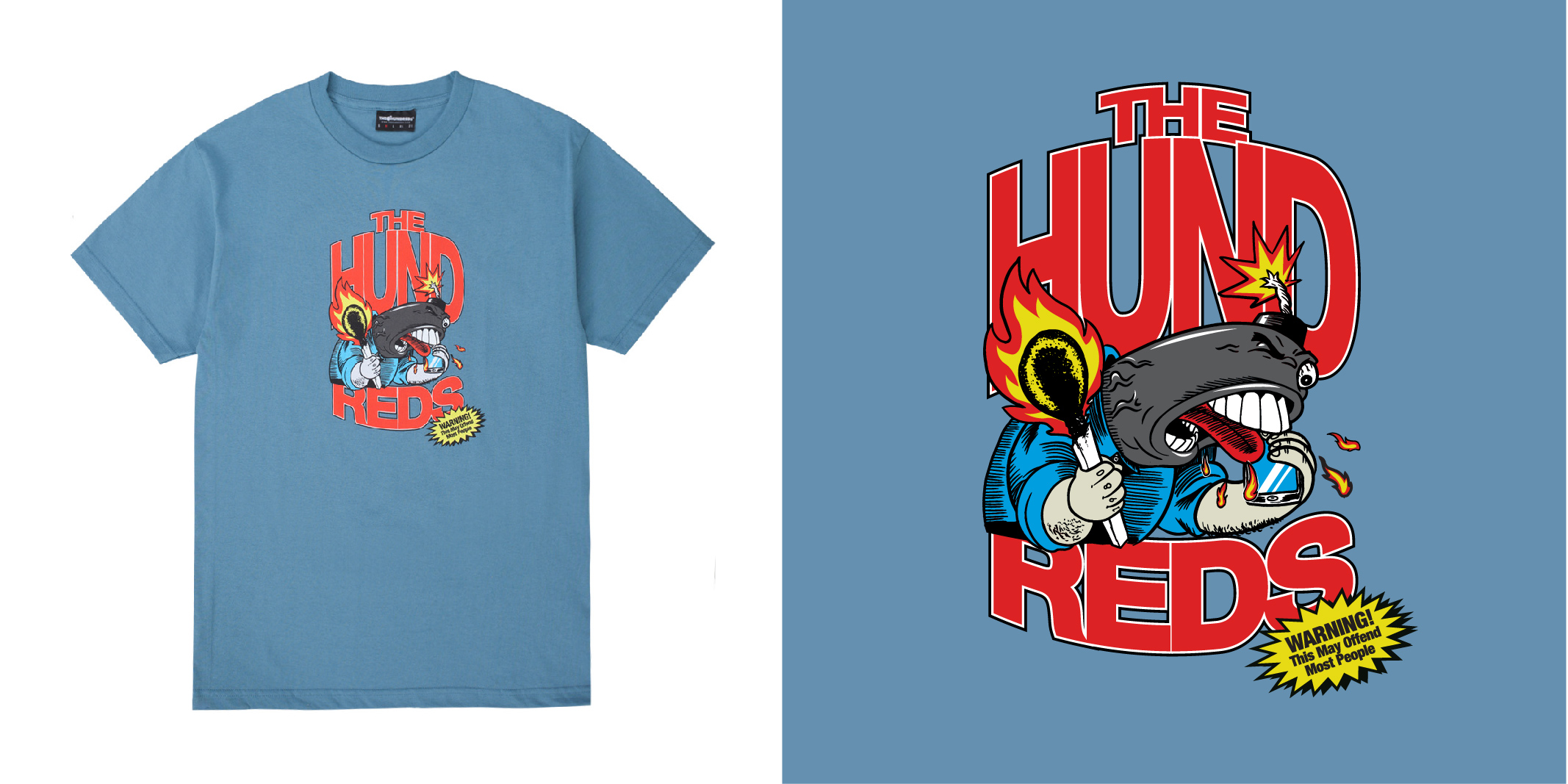