What E3 Taught Me About the Future of Virtual Reality

E3 aka Electronic Entertainment Expo—I just found out that’s what it stands for—is a yearly convention where the largest video game and tech companies stand side by side at the Los Angeles Convention Center to have the world’s most technologically-advanced pissing contest. However, this year in particular, it became very hard to distinguish streams because everyone’s presenting the same thing: virtual reality—much like when online gaming came around. 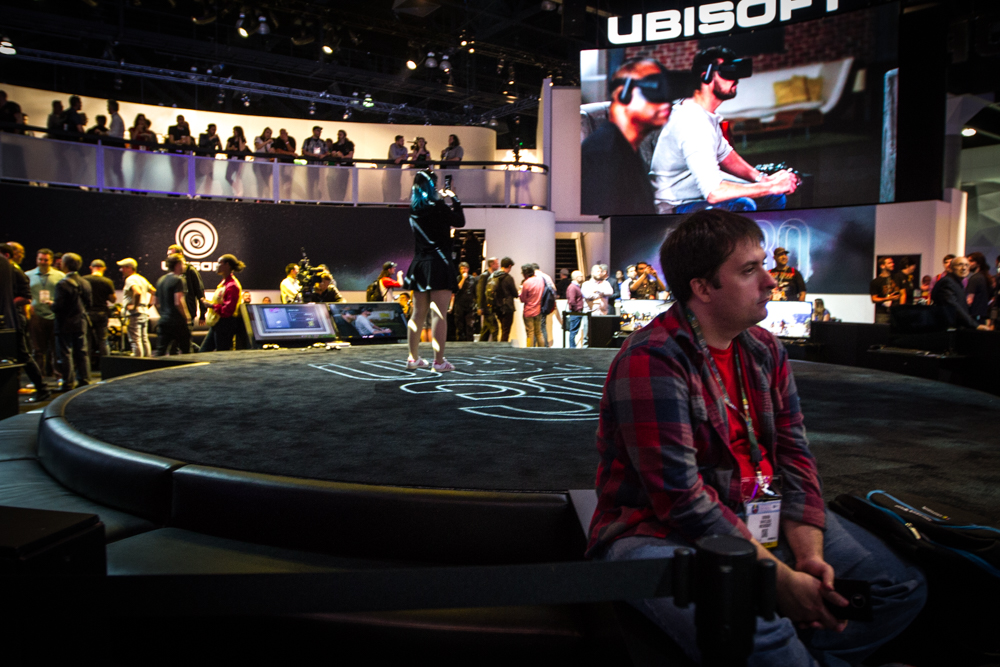 Just take in everything going on in this.

Every tech titan in attendance was looking to be the first to utilize the technology to its fullest potential. Connor Burton of ABC News even stated that “During this year’s convention, the VR arms race was out in full force” in his recap. Yet very few companies are actually creating new platforms for it. Playstation is just adapting their games to virtual reality, and same goes for Xbox. It’s easy to get sucked in by the flashy costumes and elaborately-themed presentations, but it’s rare to find a company creating an entirely new outlet for VR usage, though not to say impossible.

So how does one really find the innovation? Well, it depends on where you see the future of virtual reality going. I foresee interactive, narrative storytelling—something that companies like Telltale Games and Quantic Dream have already started dabbling in. It’s basically RPG meets TV, where you control the character and his or her decisions, customizing the story arc and ending to reflect your choices. Aka the Give Yourself Goosebumps books. More on that later. However, when it comes to tech industry anticipation, headset company Astro Gaming has proven time and time again that their forecast is the one to watch. Luckily for me, I had the luxury of being invited by their Marketing VP, Aron Drayer, to get a hands-on demo of their latest A50 headset paired with the HTC Vive, along with a few insights on the technology’s horizon. 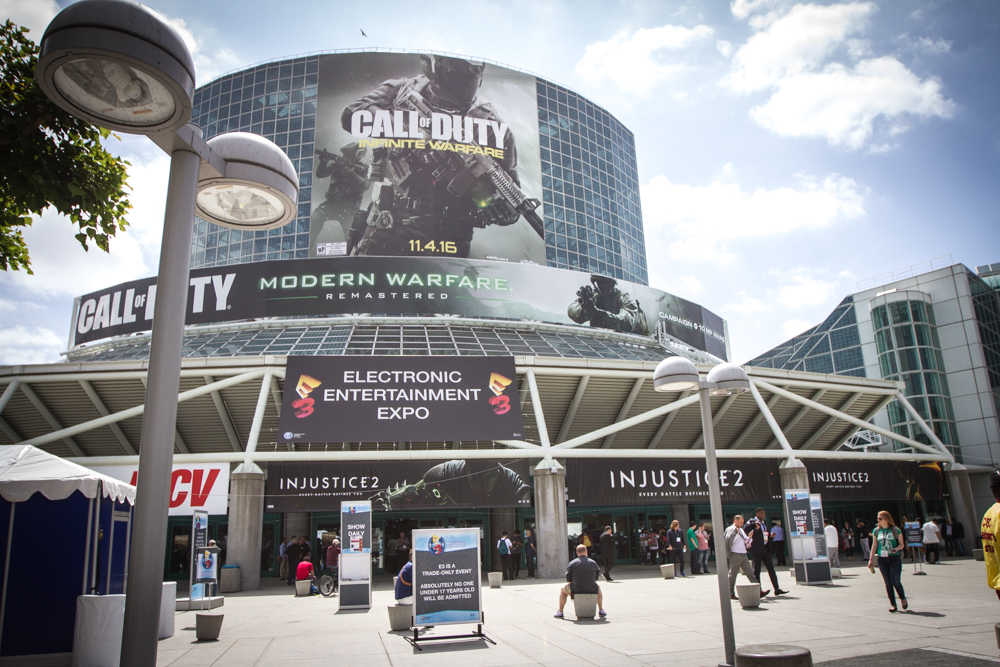 Quick Wikified background: Established in 1994 as Astro Studios, Astro Gaming was the product of some solid foresight into an emerging gaming accessory market; headsets. Skullcandy quickly snatched the company up in 2011, the same year it was marked at #13 on Inc. 500’s America’s Fastest Growing Companies list, and three years after its A40 Audio System became the official licensed headset of Major League Gaming. Which only happened after being banned and deemed an unfair advantage in 2007.

Even now, the company is branching out into becoming a lifestyle brand—developing a blog and working with highly respected graffiti collective Seventh Letter to create branded, recognizable, and customizable headsets. A defined, discernible personality to latch onto and trust: the key to longevity. It’s the streetwear philosophy. The headsets look amazing and clean by the way. So, again, Astro Gaming seems consistently ahead of the... game. (Sorry.) They think long term. And for E3 2016, they partnered up with the HTC Vive to demonstrate their new wireless A50’s functionality with the system. So clearly, they see something in HTC’s VR. And I’m going to listen to what they say.

Now, going into E3, I certainly had my personal predictions on the future of VR, one that aligned with structured stories. I’m sure you’ve seen the 360 music videos—imagine that on a larger scale than just looking around. Telltale Games is known for releasing interactive “episodes” of games that come out weekly and allow you to make decisions that alter the storyline. Quantic Dream has done something similar, even using the likeness and voices of real actors like Ellen Page and Willem Dafoe via motion capture in their 2013 “Beyond: Two Souls” game. 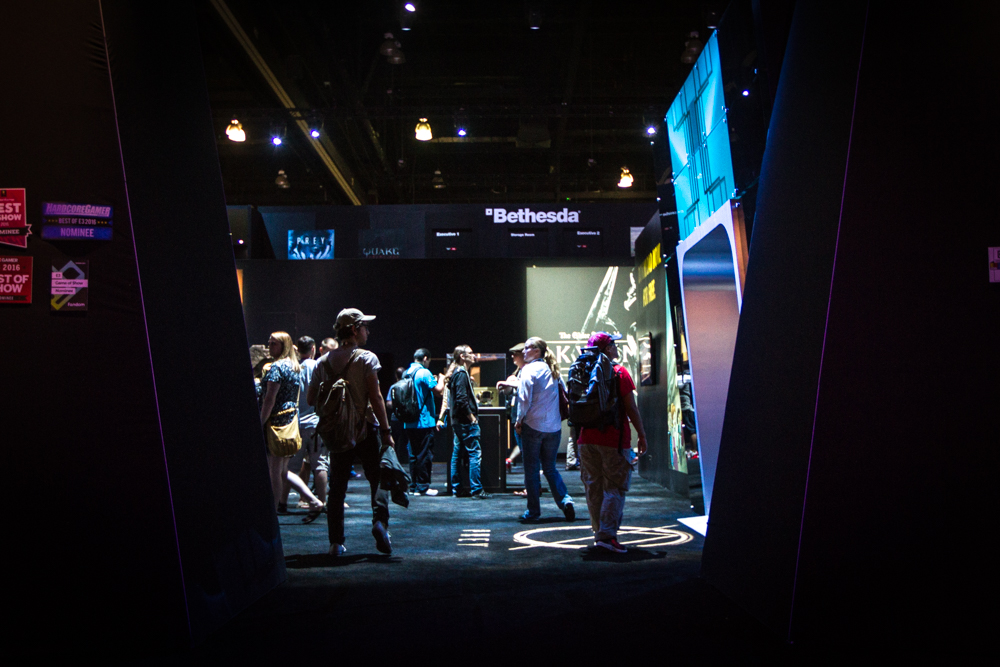 But now, Telltale’s growing popularity—partly in thanks to acquiring the licensing to adapt movies and TV franchises like The Walking Dead, Back to the Future, and Game of Thrones into video games—has led them to a Batman game. Which most gamers know, right now, Batman licensing is a good sign you’re doing well. And, you guessed it, Telltale has been talking about some implementing some VR into their systems. So with the increased recognition, I figure it’s only a matter of time until we as consumers are able to move from manipulating the plot to literally inserting ourselves into the story lines. At least that’s my hypothesis.

And as I stood there, totally lost in this huge convention center, my mind wandered to this new era of storytelling, and I began to think about how we already create narrative performances through calculated Instagram pictures and Snap Stories to a certain degree. So the demand is there, this only seems like the next logical phase.

After entering Astro’s booth and being shown their latest release (the wireless A50 headset, we already talked about this, guys), I couldn’t help but notice the lack of costumed attendees. The age bracket raised. The majority of people in there were older, higher-end businessmen in button-ups and blatantly thick-rimmed glasses. Oh, and then Murs. Murs was just chilling there. I knew I had entered a special zone.

The first thing Marketing VP Aron Drayer did was point at a Vive user and say something along the lines of wishing you didn’t have to look like a freak wearing the goggles. Marketing VP. It wasn’t long before he’s opening up the glass containers to show me the custom Seventh Letter tags—with designs from Rime, Saber, Krush, and DabsMyla—which are magnetic, easy to swap out, and remarkably well-printed. I was trying my best to pay attention, but, I mean, Murs was there, waiting patiently—folded hands, crossed legs, and all—for his turn. Is there any niche lifestyle or subculture VR isn’t going to mesmerize? That’s when I realized what I, an unshowered 23-year-old streetwear kid with mismatched socks and a shortage of cigarettes, was doing in an expensive tech booth next to Murs and millionaires. I was part of Astro’s push into lifestyle culture, and it was working. After all, they are a subsidiary of Skullcandy, a brand that attached itself to the action sports industry in 2003 when Rick Alden founded it. The same Rick Alden who, in 2010, went on to round up a few industry bigwigs and turn a simple sock into an entire action sports culture brand—Stance. So, I like to think they know how to brand something excited to be a part of this leap.

But it was time to cut the shit, I wanted to test out the Vive for myself. 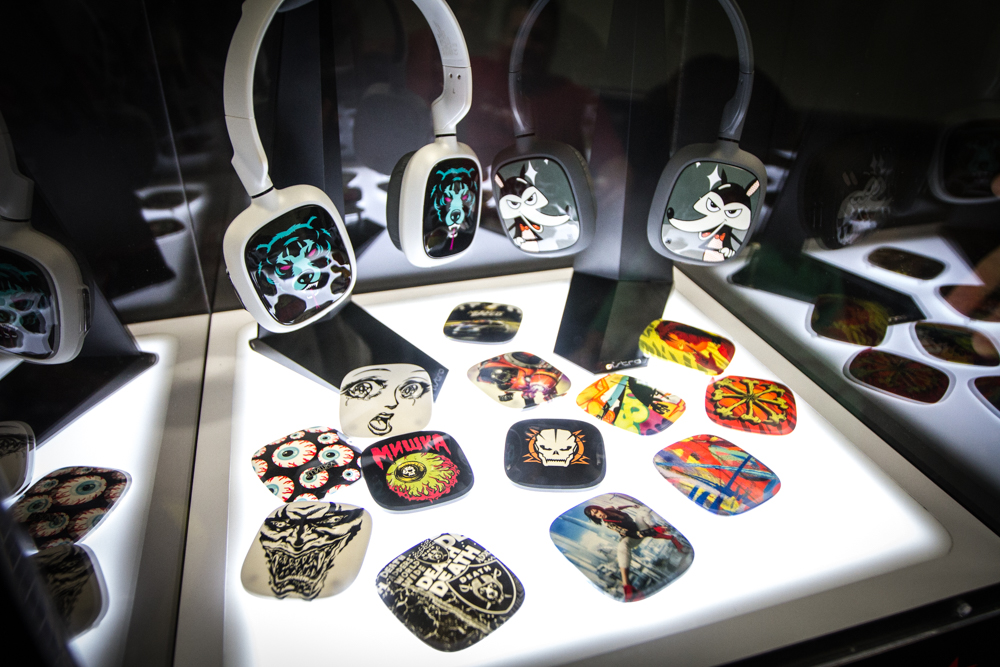 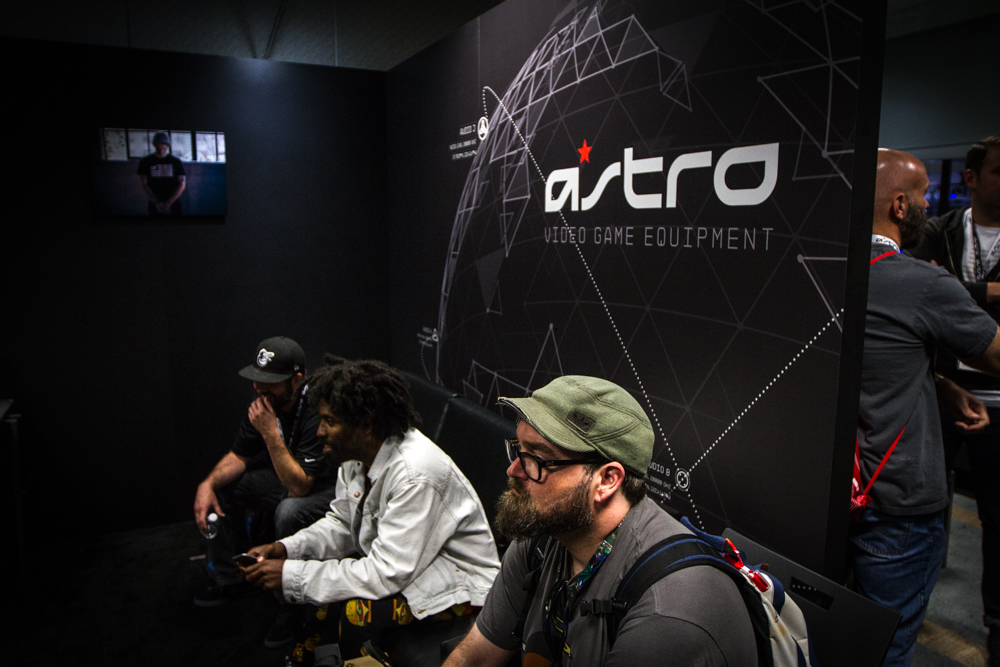 Before I entered the virtual world—where I plan on eventually staying—I briefly mentioned my VR hypothesis to Aron, but he had a different future in mind. He predicted that once virtual technology becomes mainstream, after the initial explosion calms, it’s going to find its place as a much more simple utility: one that works like a roided-out Google Maps, where you can tour hotels before you book, check out apartments across the country before you move, attend concerts, meet with doctors, conferences, and so on. Aron believes video games are a starting point for virtual reality, basically just to prove that it works. Essentially, VR games will become the same as smartphone games, more of a novelty to pass time. Once virtual reality has been in rotation for long enough and we’ve grown used it, actual gaming are going to take a backseat to its utilitarian functions. Much like the way smartphones work now. Keep in mind, there’s got to be a reason Facebook acquired Oculus almost immediately. He asked me if I was ready to try. I’ve been ready since I was five, Aron.

Just to make this clear, no, no video or explanation can come close to capturing what it’s actually like to be in the world. Three minutes in, you forget you’re crawling on the floor in a room full of strangers, accidentally grazing their thighs with your controller as they all chuckle. It’s on a completely different level of immersion, unlike anything we’ve ever seen before. The trial consisted of three realities—one where I was defending a castle with nothing but a bow and arrow, another that resembled an old school spaceship arcade game, and a third where I was touring a mountain side.

Although the least “fun,” the third simulation was the one that struck my fancy since it fell in line with what Aron was saying. This could expand to sensor suits, where you can feel the wind on your face anywhere in the world for half the price. It scared the shit out of me. Why? Because taking the goggles off and leaving the clouds to return to a room full of people I’ve never seen saddened me. I was in for 20 minutes, I was already a junkie. Why would I ever need to be in public again? 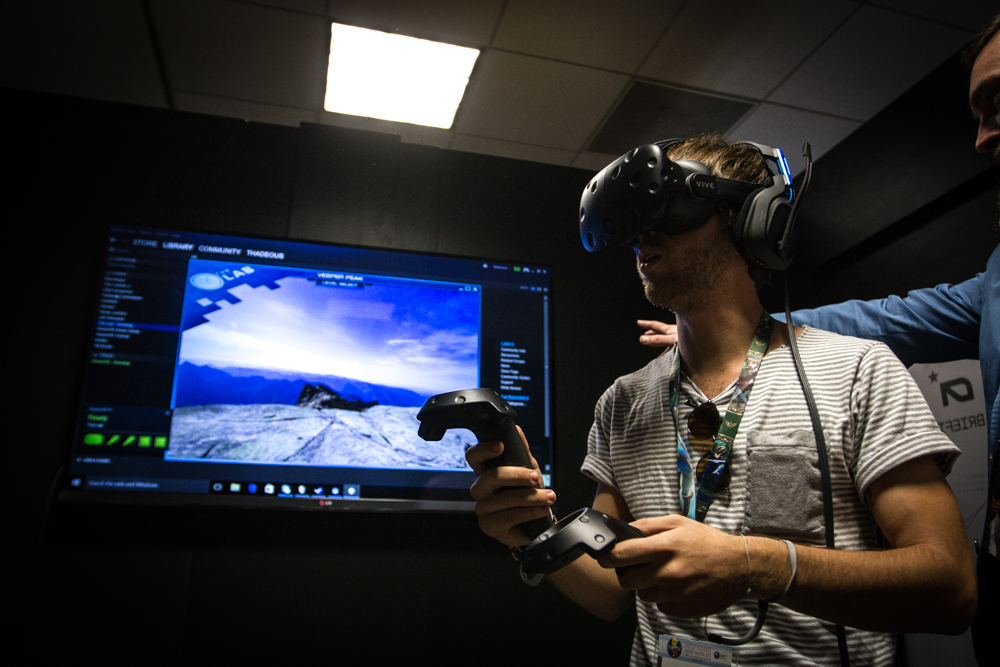 What Aron and I predict about the future of virtual reality may not even scratch the surface. The real destiny of VR may just be a hybrid of entertainment and utility. In real life, I can’t afford to go to Iceland, I can’t always find time leave work and go to the doctor, I can’t do my job from the bottom of the ocean instead of a cubicle, I can’t possibly see every concert, I can’t eat dinner with my long-distance relatives, I can’t always get the best seats in movie theaters. All of that could remedied for about $1000. Convenience and efficiency is always embraced, and with the VR, you wouldn’t have to even leave your porcelain toilet seat.

E3 showed me the marketer’s approach to VR, one that involved a whole bunch of smoke and mirrors to just advertise engrossing gameplay, but history is set behind closed doors, not on stages. And that’s where the actual trial showed me there’s much more to it. Virtual reality is, without a doubt, going to absorb “low-level interactions” in the same fashion that phones and tablets have. Remember record stores? Neither do I. Remember having to go in the bank? Remember touring museums? You won’t. Your kids definitely won’t. But above all, what I learned from E3 is that I probably should’ve tried out that VR porn. 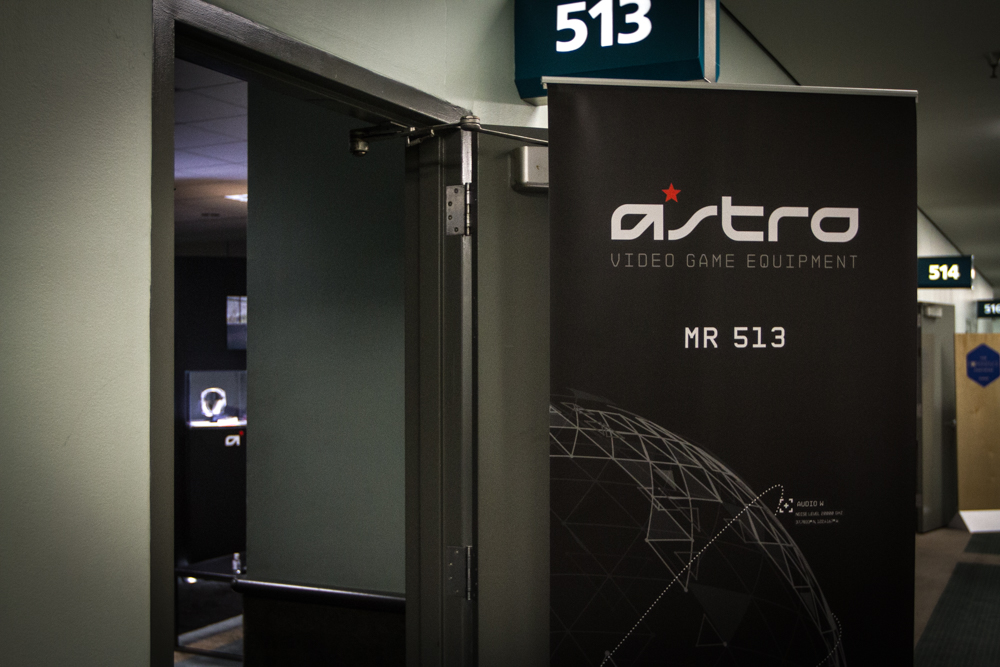