When Greg Hunt began filming on Vans Propeller, he was living in a one-bedroom apartment and single with “zero responsibilities.” Fast-forward almost six years and Greg has a wife, a baby, and two dogs. Now that the dust has settled, he’s currently working on a special edition of Propeller for release in late 2015 and enjoying some much deserved down time. Curious as to what’s on his mind in a post-Propeller world; in the wake of the year’s biggest and most-anticipated skateboarding video, the press tour, as well as all the criticism that comes with it, I caught up with him for a little chat. 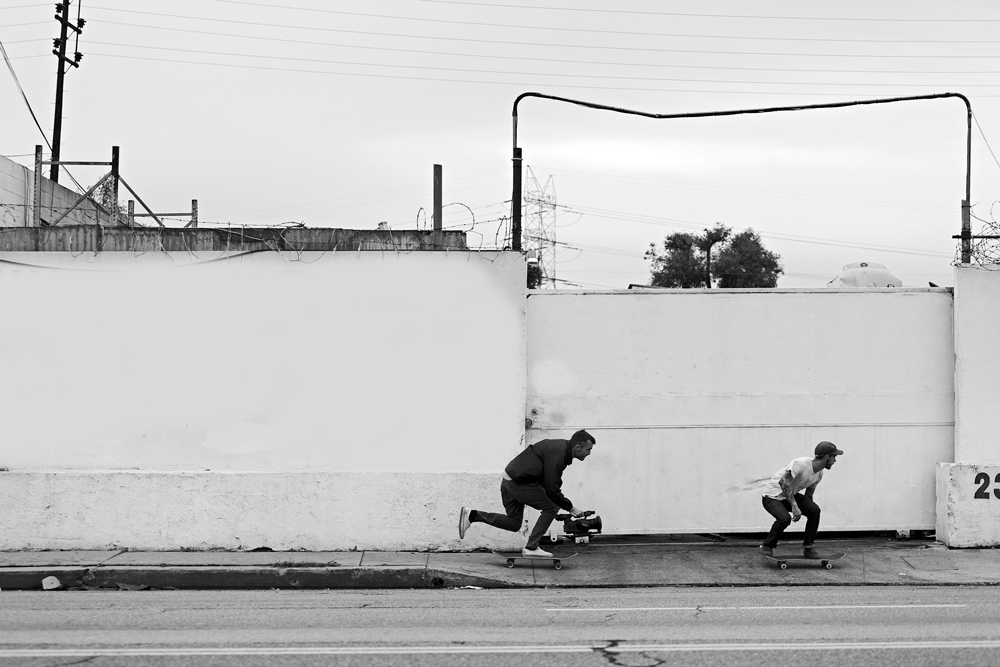 ROBERT BRINK: I’m hearing people say they enjoy the Propeller Raw Files more than the video itself. I experienced the same at Emerica when we released the Stay Gold B-Sides ...
GREG HUNT: I was 17 when Rubbish Heap came out. It had no real soundtrack except random parts with Rodney Mullen and Jef Hartsel. I loved it and that’s why I did the Raw Files this way. But for people to say, “This is so much better than the video,” I don’t get that. Rowan’s part with that song and all the different angles—there’s an emotional thing built in when you watch. That doesn’t happen with raw footage. Raw footage is awesome and a great way to get all the extra stuff out there because people love it, but I’d take an edited video part over raw footage any day.

To me it’s an enhancer. Dollin’s raw stuff blew me away, knowing what went into that part.
For sure. If anything, the feedback I get is, “Why wasn’t this in the video?” People might prefer it because it’s honest. It shows the real story of the slam and the make and that’s very telling of what these guys put into it. I wish I could’ve put a lot of that into the video, but you can’t. I could always do better, but you’re trying your best to include everything in the best possible way. Chima’s part had too much skating, that’s why we added a little something at the end. I extended Daniel’s song just so I could fit more skating in there. It hard to condense four years of skateboarding into four minutes when you’re following the traditional formula for video parts.

I don’t think people realize how restraint plays just as important a role …
Exactly. You can make a video that’s short and to the point and some people are gonna love it and others will feel like they were expecting more. If you make a video with longer parts and a lot of stuff in between, people are gonna say, “I just wanna see the skating!” You’re never gonna be able to make everybody happy; it’s just impossible. Some of my favorite moments in the video are only a couple seconds long. Like Anthony in front of the water main that explodes or Daniel standing on that mountain and the tram comes by.

It seems like you’ve done a ton of press for this video. Back in the day no one interviewed the filmmaker.
It’s weird that nowadays, so many people want to talk to the filmmakers. I understand that I’m the person steering the ship and ultimately responsible for all the final touches, but really I put myself in the back seat to what these guys want. And I’ve always been that way. I didn’t film everything. I didn’t conceptualize the video part; it’s them skateboarding. Half the time I wasn’t even there, or off just trying to find a good angle. When it’s all done, I’m working with the team to put it together in a way that hopefully resonates with people. It’s trippy, but we’re in an era where people want to talk to you.

In addition to the expectations people have for the video to be amazing, it seems there’s a weird assumption that you, the creator, are trying to make an artistic statement, or should be.
I totally agree. People that really have a vision when they make a video—the way they want it to look and feel prior to even editing it, I think that’s amazing. When Fred Mortagne did éS Menikmati, that video was so different from anything anyone had ever seen. Looking back, that was a really artistically brave thing to do, especially for such a young kid who, at the time, didn’t really know anyone.

I didn’t have a creative group that was working on this; it was just me. I had a lot of things planned for in-between parts and the intro, but I simply didn’t have time. And when I started to see how it was coming together, I saw it was a very straightforward, no bullshit skateboarding video, for skateboarders. No narrative, nothing very conceptual, no acting. I thought, “You know what? This is actually pretty cool. Just straight up skating.” How can you not like Anthony Van Engelen or Rowan Zorilla or Daniel Lutheran or Gilbert Crockett? These guys are amazing to watch skate. I know that much. 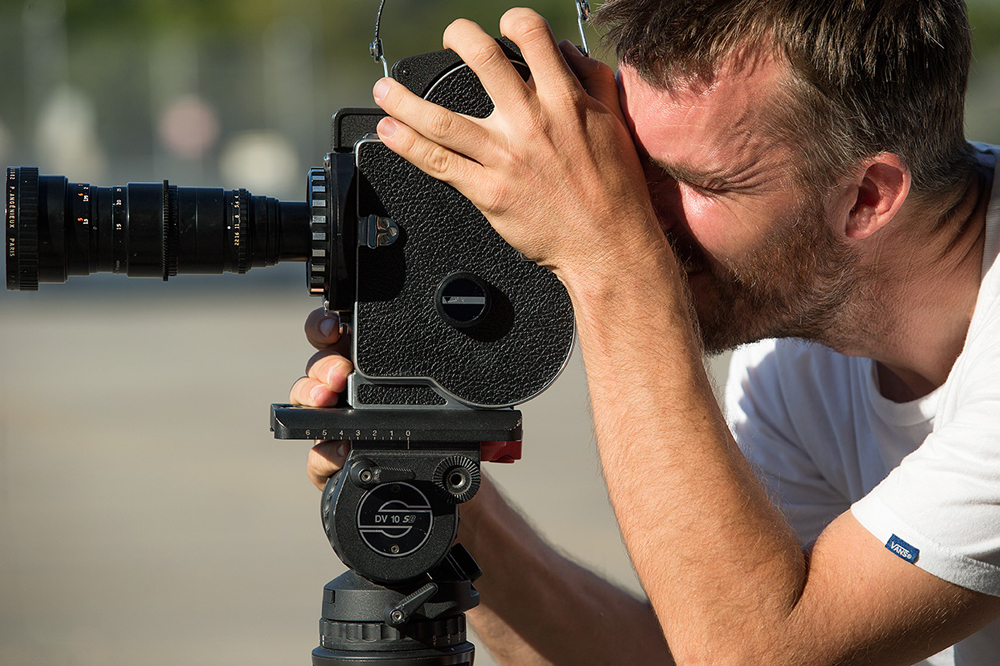 I think people also don’t realize that the artist might actually have zero interest in pleasing anyone except the people involved in the project.
That’s exactly it. Some people take it too seriously. Really what it’s about is the skateboarding. And when I’m editing, I’m working primarily as a skateboarder. I feel like people look at these videos like it potentially could’ve been this or potentially could’ve been that. This video, more than any that I’ve ever done, is what it is because of the skaters in it. It’s their skateboarding. They were very involved in what went into the parts. I read one thing that said that Propeller wasn’t an honest representation of modern skateboarding. The person who wrote that just doesn’t understand. He’s out of touch with modern skateboarding, because this is the most honest representation of these guys that I could have possibly made. I’m not saying it’s a masterpiece, but I would like to think, if you’re someone who loves skateboarding you’re going to sit through it at least once and enjoy a lot of it. If you, for some reason, can’t enjoy a lot of this video, then I don’t know what to tell you because I spent five years working on this thing and I still love watching Anthony’s and Rowan’s parts ... because I’m a skateboarder.

What stands out as the most impressive or scary thing you saw go down?
Trujillo’s last trick was really impressive. That was fucking gnarly. I’ve skated with him enough to know that when I saw him up there, he was really freaked out. You can’t try it a bunch of times. It’s one of those things that once you commit to going down, you’re either gonna pull it or you’re gonna seriously fuck yourself up—really fuck yourself up.

Kyle Walker getting hit by a car too ...
I was already editing at that point. But yeah, that was fucked up. I saw the footage and didn’t want to use it because it’s not even like, “Oooh.” It’s like, “Ugh!” When it happened, the guys texted me the footage off their camera screens and it seriously looks like he got killed. He’s running across the street, he’s lying on the ground, he’s screaming. Horrible.

But I mean, fuck, Kyle tried his last trick in Atlanta for maybe two and a half hours. I don’t even know how his body made it through that. He tried it, couldn’t do it, sat down and was over it. Everyone was like, “Alright, you did it; you gave it your best.” And he was sitting there like, “You know what? Fuck it. I’m gonna try it again.” And I think that happened definitely once, if not twice before he landed it.

Have you ever backed somebody down because you were scared they’d get hurt?
I’ve never told anyone they should stop. There have definitely been times when I felt like, “This is a really bad idea.” These guys know their own limits. I don’t think anyone really wants to get killed. If anything, sometimes I’ll say, “Hey, man. Maybe we shouldn’t do this right now because it looks like if we do, we’re gonna go to jail. Let’s come back later or figure out some other way to do it.”

Back when you made the M83 “Echoes” video, you and I were talking about being Terrence Malick fans and such. How much do outside influences come into play as a skateboarding filmmaker?
The first year we were filming Propeller I was watching a lot of rock documentaries. This old Bowie documentary and a Rolling Stones documentary called Stones in Exile.

In my opinion, skateboarders are more like musicians than athletes. How they perform and how they create and promote skateboarding—how people love a certain skateboarder more than another. I love seeing a band recording in the studio and the moments where they’re not actually playing the music—sometimes more than when they are playing. I like seeing guys sitting in the rehearsal room on the couch talking shit, or even a guy alone sleeping in the corner of the studio. That, to me, is really revealing and intriguing. That’s loosely what I went for in this video with a lot of the 16mm stuff.

How much of your work is inspired by things you see that you don’t like?
Almost all of it. That’s the approach I had when I skated, long before I started making videos. I would just look at what everyone was doing and try to do the opposite. Skateboarding can be frustrating because physically, you have so many limitations. Sometimes you just can’t do it. And it’s funny because now that I’m making these videos, I have other limitations: budgets, time, and the ability to actually make something happen. I think when I’m watching or reading or just observing anything, something clicks in my brain like, “Well, I definitely never want to do that,” or, “That’s really cool; how can I do that, but differently?”

As a filmmaker, is it advantageous that you were once a pro skater who’s filmed video parts?
I don’t think so. I skated in the mid-nineties in San Francisco. It was a lot different then. Most of these guys now, they trust me because of the videos I’ve done, not because of the skateboarding I’ve done. They are 18, 19, 20 years old, and through making a video over the course of five years, they change a lot. You realize the distractions, lack of motivation, and things that become hurdles for them. I definitely blew it in many regards when I was young, so me acknowledging and applying it to help people is what I use more than anything. Even if I don’t say it to someone directly, I might just say, “I know what this person’s going through; give him some space.”

Also, you’re not just the filmer or director or producer; you’re a mentor ...
And it’s tough because everyone is so different. It’s not a fucking wrestling team; it’s a skateboarding team. I’m not always successful, but I try to be sensitive to each person’s energy and needs. You want everyone to be stoked, not miserable.

I can’t take all the credit. When these guys are all together it takes on its own life and I’m sort of there trying to make sure everyone’s up and in the van and doing my best to steer the day in the right direction where we can get as much done as possible.