Through the Viewfinder is a new photography series where we ask renowned photographers to share the stories and inspirations behind their favorite photos.

Devin Allen is a source of inspiration. He’s gone from aspiring photographer posting his work on Instagram and Twitter to having his own TIME magazine cover. That cover shot, taken during unrest in Baltimore following the death of Freddie Gray, remains one of the most powerful images of the Black Lives Matter movement and one of last year’s most poignant magazine covers. Fans have even tattooed the image on their bodies.

After our recent profile of Allen, “How Baltimore Photographer Devin Allen Used Instagram to Make a Difference,” we thought it’d be great to have the Baltimore photographer break down the stories behind some of his favorite images in his own words, to see what was going through his mind when he snapped them. He was kind enough to share the insight behind these 5 flicks below, including his iconic TIME cover. 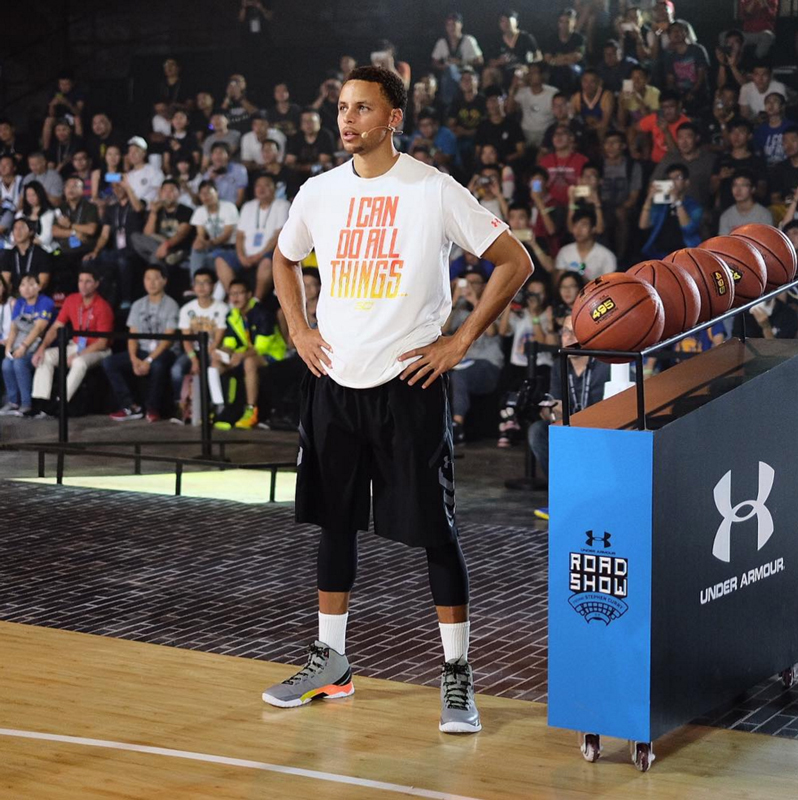 Devin Allen shot Steph Curry on assignment for Under Armour in Beijing. 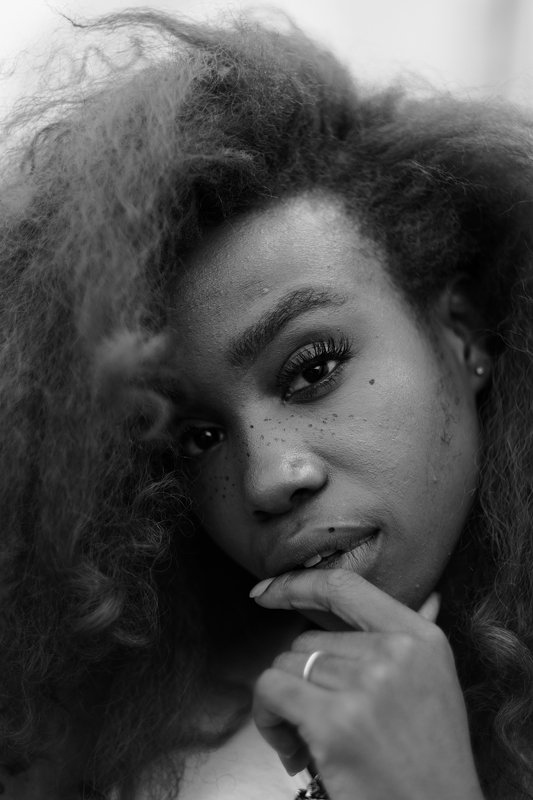 “I love SZA to death. Other than Zoe Kravitz, Lisa Bonet, and Erykah Badu, it’s SZA… I’m a big Top Dawg Entertainment fan: SZA, Kendrick Lamar, ScHoolboy Q, Jay Rock. And SZA’s one of my favorite up and coming artists.

She actually posted my TIME cover and when she posted it, she actually tagged me in it. That meant so much. I was like, ‘Oh shit!’ I was trippin’. When I met her, I didn’t know if she was gonna remember me. I was at Afropunk because they asked me to cover the festival. I was like, ‘Hey, I’m Devin Allen. You posted my TIME cover.’ She gave me a big hug. It was so… I was like, ‘You’re one of my favorite singers right now.’ She introduced me to her father. I was like, ‘Oh, I almost forgot. I have to snap a picture.’ So, that whole backstory of her supporting my work, shouting me out, and how she’s popping right now but still recognizes an aspiring artists, that’s very important to the culture. That was enough. It inspired me to keep going.

It’s also one of  my favorite photos because I love portrait shots and I love natural beauty. I love to shoot women in their natural form and she just glows. It captures her personality.” 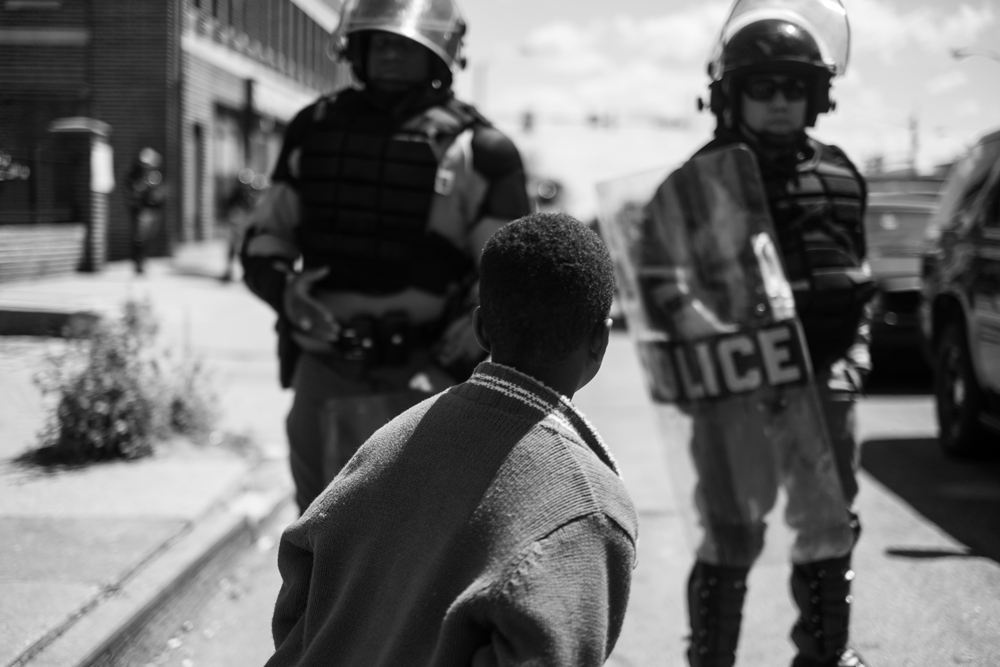 “This kid just wanted to walk past the police officers. They were so cold to him. He’s seven years old. He’s trying to get to the store and get something to drink. They could not just let this young man walk past. This was his neighborhood. He really was about to cry. He was seven or eight at most. That shit broke my heart. I understand if there were riots, but this was a new day. People were out there cleaning up.” 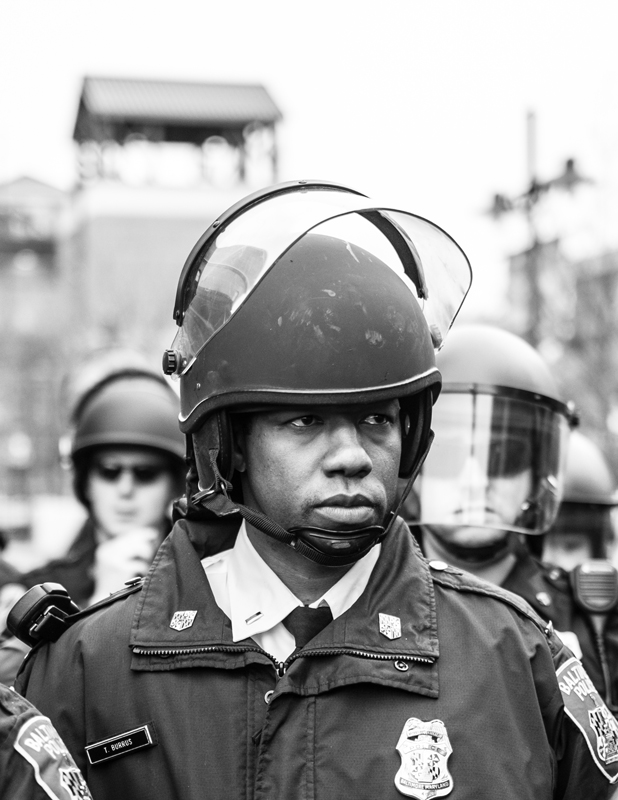 “But when I took that picture and I saw him, he realized, ‘I’m a black man. My people are dying.'”

“That was one of the few and only police officers I came in contact with that showed any type of remorse or that showed any type of emotion. A lot of the police officers I’ve seen in riot gear were like Robocop or Terminator. No emotions, like robots. When he started tearing up—a lot of people say he wasn’t really crying or blah, blah, blah—but Freddie Gray’s cousins were on the blow horn yelling: “We want justice for my cousin.” “I’m just like you.” “We’re both black. Why aren’t you over here marching with us?” I watched this officer strap on his riot gear and helmet and he really had emotion in his eyes. He really could understand what the fuck was going on.

If you look at officers in my pictures, half of them don’t have a smile and don’t have a frown. It’s like they’re robots, programmed to come out here and hurt people. But with him, he was really touched by the words. That moment reminds us that police officers are human. They do have emotions. I think a lot of people forget. We’re so mad at police brutality but we’re dealing with the human psyche. We have to understand that these are people. And people are fucked up.

Sometimes, when you fight police brutality and racism, you become cold. With racism, you might become a racist because of your hate for racism. The shit that you’re fighting, a lot of us can become those things because of the negativity and energy that we suck up. I think that’s exactly what happens to police officers. They’re trained to racial profile. I don’t care what nobody says. They’re trained to look at certain people a certain type of way. They become so institutionalized by that, they forget they have this power. But when I took that picture and I saw him, he realized, “I’m a black man. My people are dying.” That’s just what I felt for him. “He might have had allergies”—[People were saying] some shit like that on the picture, but I watched him, man. He was fine. As soon as Freddie Gray’s family started speaking, that man was about to cry. I put that picture in my exhibit in Baltimore. The police officer actually came and took a picture with his son in front of the picture and put it on Facebook. That’s what it’s about, the fact that we can connect. Some police officers with emotion, who feel connected to the city, it’s important. Showing emotion in general is why it’s one of my favorites.” 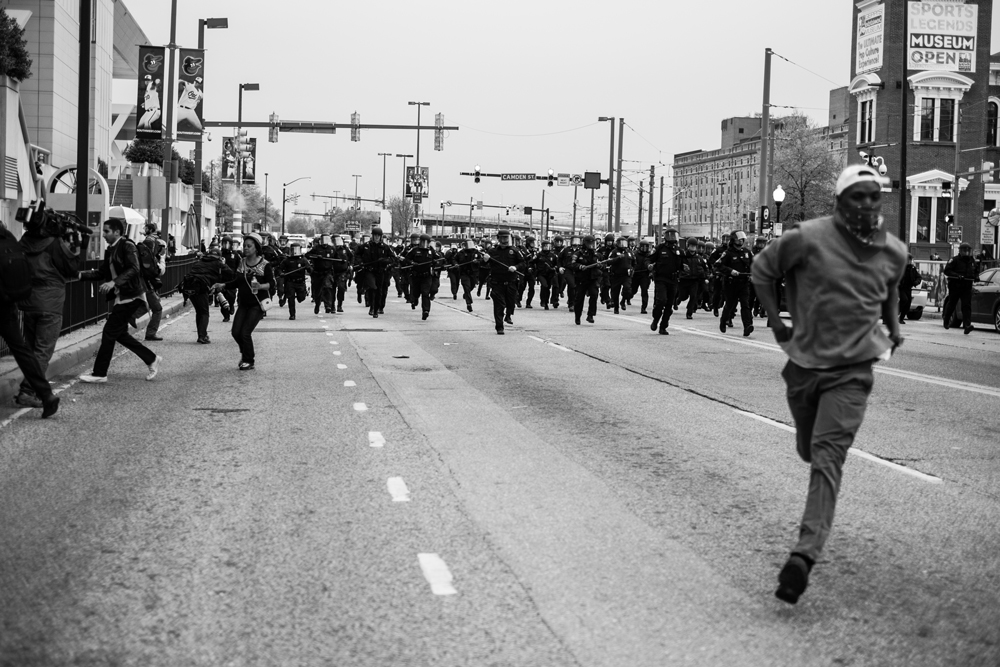 The Devin Allen photo that eventually earned him the iconic TIME magazine cover.

“I watched this guy literally run past me. I didn’t know the police had formed a line behind them to box him in. So, he ran down and I manually focused. As soon as he ran down the frame, I just snapped. Then I looked down and I was like, ‘This is a dope picture.’ So I WiFi’d it to my phone and when I looked up, the police was right in front of my face. They could’ve ran me over but they didn’t. I hopped up and weaved in between a gate, hopped over the gate.

After I sent it to Instagram and Twitter, I posted, ‘We are sick & tired.’ By the time I drove home, I checked my Instagram feed and the picture just went viral. 5000 retweets and 1000 likes. It was my first picture, I believe, to get 1000 likes. I went to sleep with 10,000 followers and woke up with 16,000. Next thing I know, this picture is everywhere.”