Through the Viewfinder :: Behind Celia Spenard-Ko's 10 Favorite Shots

Through the Viewfinder is a new photography series where we ask renowned photographers to share the stories and inspirations behind their favorite photos.

My first encounter with Celia Spenard-Ko’s (@ceeesk) work dates back to a time where we became co-workers at one of the top stores in Canada—a place where many talented young minds like herself developed their sixth sense and made defining choices to pursue a path of their own. I immediately could tell she was a creative type, but it wasn’t until I began seeing her work pop-up on my feeds did I realize the immensity of her talent. I would wonder, “Who shot this? Who did this?”

Now, people often portray me as being very critical and somewhat not approachable—which is true. I tend to keep things at an arm’s-length before I can fully embrace and respect someone’s work. With all the garbage and regurgitation we see nowadays, it’s truly difficult—and getting increasingly harder—to find authentic work. But Celia’s photos were different. The end result is real and has purpose. Substance.

“I believe every facet of a subject’s identity is worth taking note of and admiring.”

Celia is born and raised in Montreal. Of her process, she says, “I’ll often choose details rather than shooting something in its entirety. By doing this, I’m focusing on specific elements that make up these greater subjects. A bit like deconstructing what makes a fascinating object, person, or even landscape interesting—zeroing in on that element to extract it and let it have its moment. Because I believe every facet of a subject’s identity is worth taking note of and admiring. I guess this is one way I’ve found of replicating what I’m going through personally in my work.”

She has worked with the likes of Oak Street Magazine, Dose, The Creator Class, OTH, Larose Paris, and many more. Currently, she’s in Europe taking photos of different fanatics throughout the Euro Cup, since one of her passions is football. Below are ten of her favorite photographs that she’s taken, and the stories that accompany them. 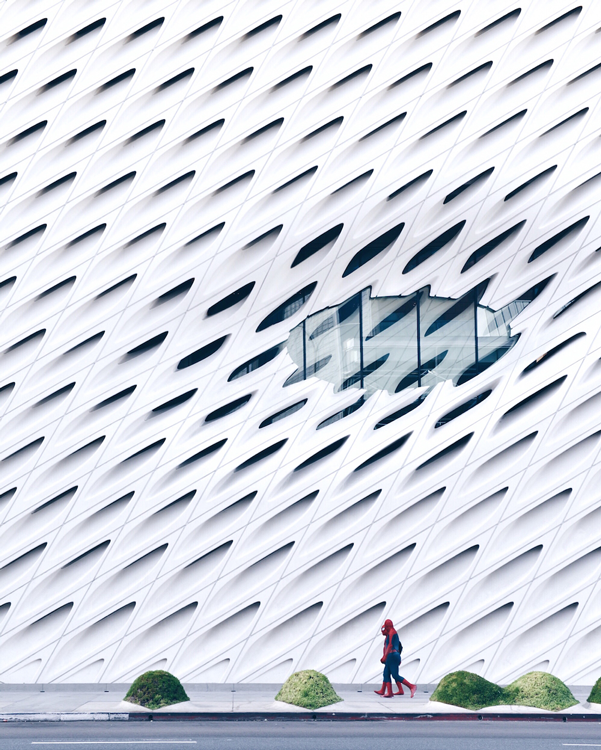 “I took this while I was in LA shooting a couple of pieces for the upcoming issue of Oak Street Magazine. I’m a huge sucker for modern architecture, so being in a city with so much of it, I just had to find time to make it out to as many places as possible in between shoots. Standing on the corner between the Broad museum and the Walt Disney Concert Hall, I just had this stupid grin on my face and wanted to spend the rest of the day shooting every possible angle of these two buildings, but I only had something like 20 minutes to hit both.

I must have been standing across the street for not even two minutes when these two guys in Spider Man suits walked by—made the scene so much weirder and I knew that was the shot. Sometimes you can plan something out in your head to the last detail, but when it comes down to it, things happen and if you roll with them you can get even better results than you had planned.” 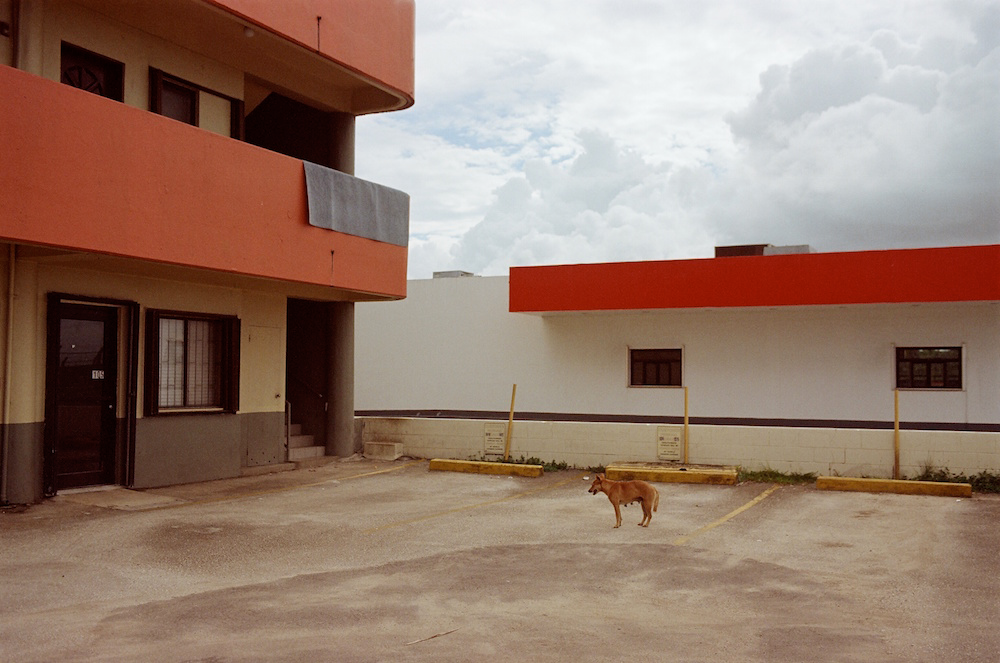 “Guam is my second home. It’s where my father lives and I’ve been visiting him there since I was 15. Once you step off the plane and onto the island, any anxieties, insecurities, judgments, all around bad vibes... they stay on the plane. Not a lot of people know of it, so when I tell them where I’m going, it’s usually met with a puzzled look. As much as I wish my father wasn’t so far away, visiting him and being that far away from my life feels good sometimes.

I enjoy being a speck in the Pacific Ocean, feeling the vastness of the surrounding water. It’s humbling. There’s not much on the island and life there is slow-paced, which comes through in the photos I take there. I took some of my favorite photos on Guam and they’re always shot in 35mm. This is one of them. It reminds me of how I feel when I’m there, that nothing really matters except life itself.” 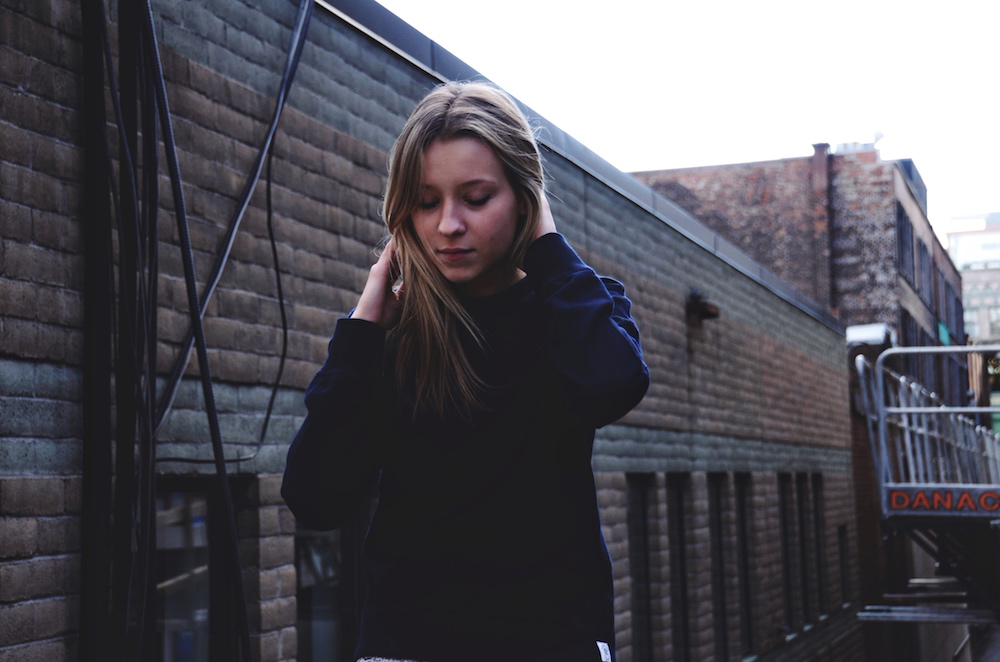 “When I was a photographer at Off The Hook, I spent a lot of time taking photos of the staff. Always good times. This one of Kristina is an outtake that I really like. Especially the softness of it—of her expression, her closed eyes. We were on the roof of the office building, it was getting dark and there was a chill breeze. I feel these are all details you can kind of see in the photo and I think that’s cool.” 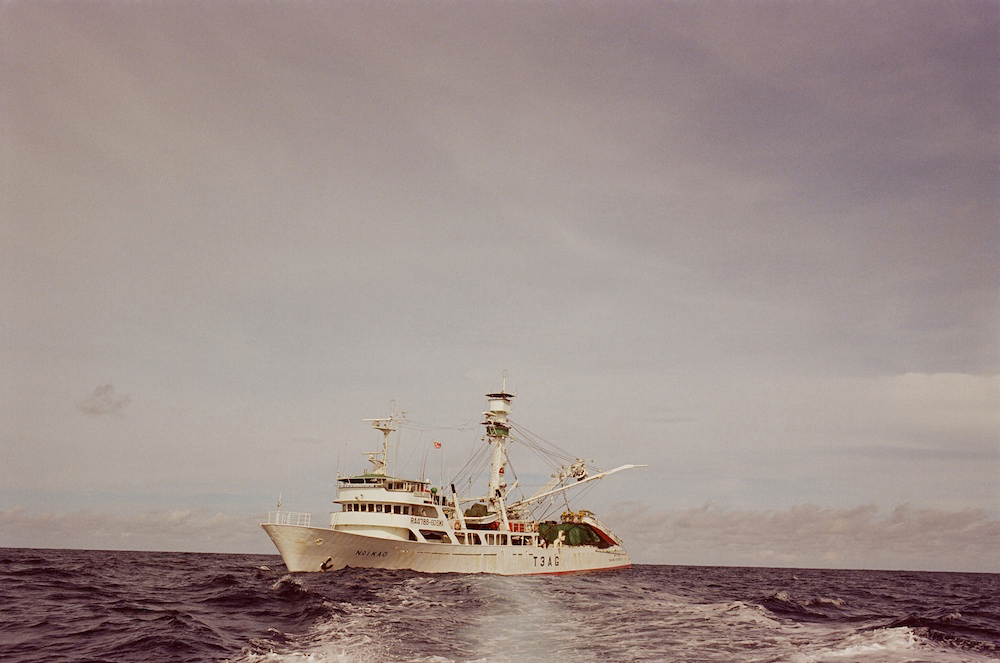 “My father’s youngest brother is by far my favorite uncle, my uncle Gabriel. He’s an agent for ships, mainly fishing ships. This was taken on one of his runs to a Korean fishing ship anchored off the Pacific coast of Guam. I’ve had many firsts with him (trolling for mahi-mahi, shooting rounds at the firing range, visiting Tokyo); he’s shown me so much and I’m incredibly grateful for all of it. We may have seen each other less than a dozen times in my entire life, but he’s made every one of those times memorable.” 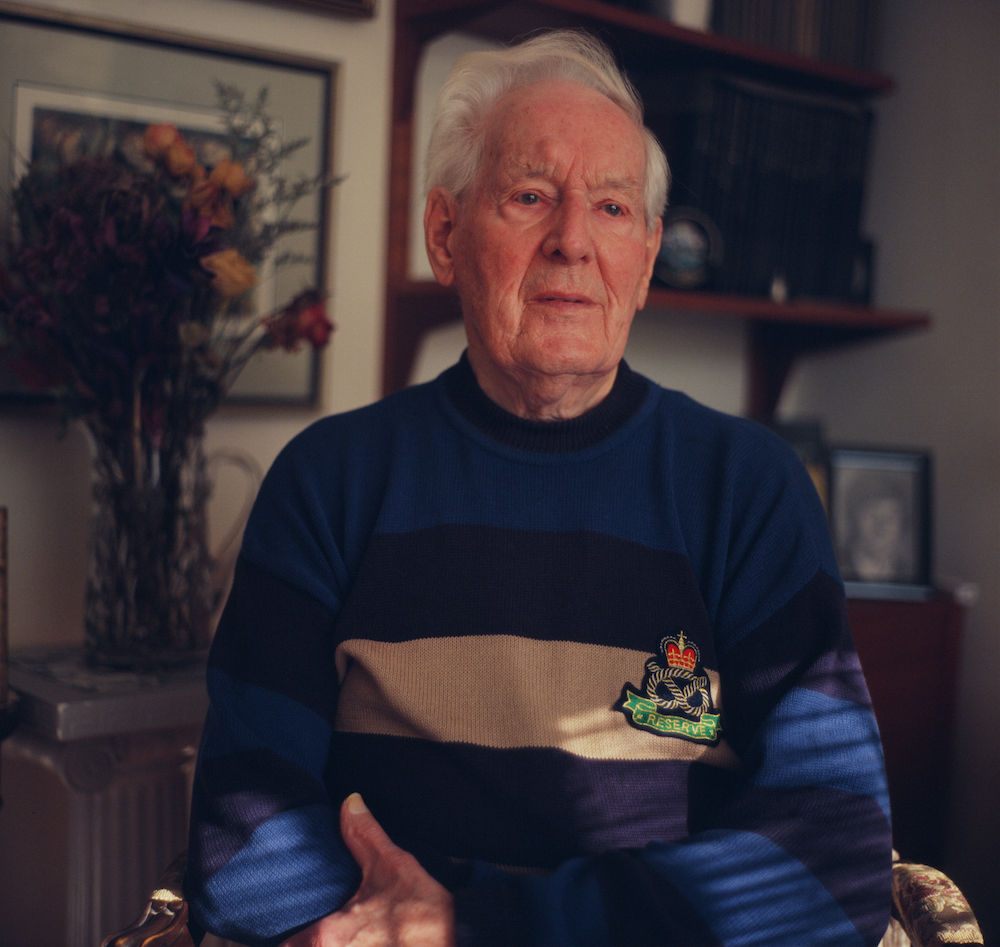 “If I had to pick one subject to shoot for the rest of my life, it would be my grandfather. I was testing a Rolleiflex camera that was given to me by a friend of my uncle Gabriel’s when I took this. We weren’t sure the camera was even in working condition, so when I got the scans back from the lab and saw this portrait, I was beyond happy. The depth and texture that comes with medium format film blows my mind and really makes me want to shoot more portraits.” 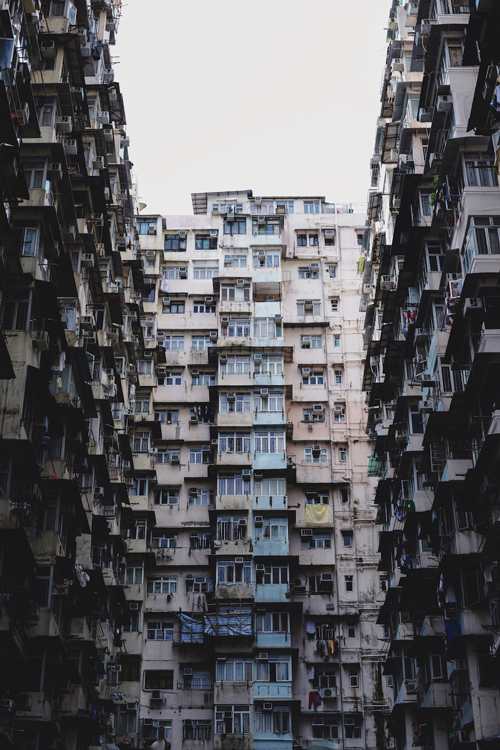 “My parents have been divorced for over twenty years. Last summer, I wanted to meet my dad in Hong Kong, which is where he’s from originally, and it turned out my mother had two weeks off work around the time I was going so we went to meet up with him together. It was wild. We never traveled as a family, so having both my parents with me halfway across the world on these intense photo sessions was unreal. I’d been wanting to shoot the housing estates for years and my dad got his friend to take us to as many as possible. I’m very fortunate both my parents really understand how important photography is to me and try to help me out the best they can.” 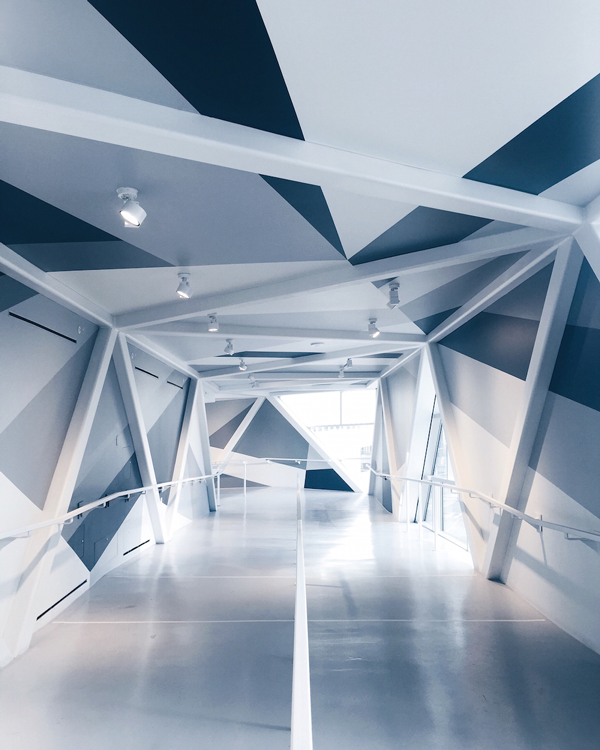 “I’m a fiend for lines. I took this while on a quick trip to Toronto for one of my clients, DOSE Juice. We wanted to shoot the juices in a bunch of spots that well represented the city and I made sure this was one of them. We ended up hitting more spots than I can count in less than 24 hours, spending on average 10 minutes at each location. It was hectic, but a lot of fun. Looking at my photos from that trip, you’d think I was there at least a week.” 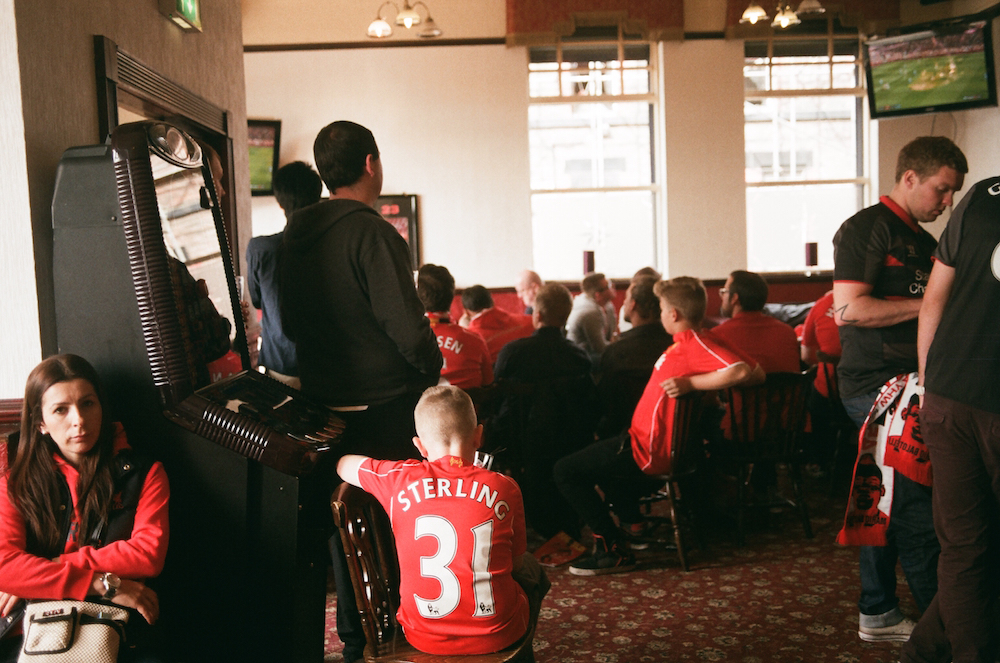 “Football is a sport I’m passionate about. Not just for watching (I don’t play either), but I’m really fascinated by the surrounding culture. It’s so rich, every facet of it—the history of the teams, of their stadium and grounds, the supporters, their traditions, and so on. I put on an exhibition last spring about football in the UK called “Finding Football” and it was to showcase the beauty surrounding the beautiful game, that the impact of this sport extends so far beyond the pitch, unlike any other.

This is my favorite photo from that series. I’m a Liverpool supporter and this was taken during my first trip to Liverpool at The Sandon pub, a stone’s throw from Anfield stadium. The supporters gather here for a pint before the game. I especially like how the woman on the right is just staring into my lens while everyone else is turned away.” 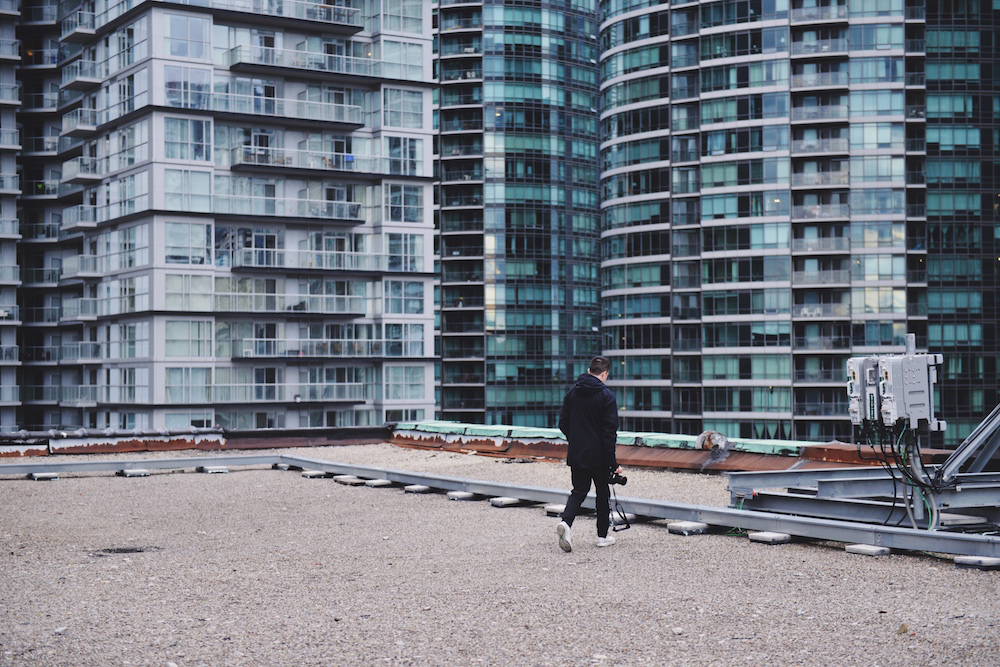 “Another Toronto shot taken during a work trip, but this time involving Jamal Burger (known as @jayscale on Instagram) and some of his friends doing their thing around the city. This is a photo of Tyler Hayward (@tilore). I remember turning around and seeing him walking towards that corner and having these flashes of Hong Kong. It was strange because the buildings don’t really look like Hong Kong style buildings, but I guess it’s their placement, the way they kind of overlap creating that density. It was great being up there.” 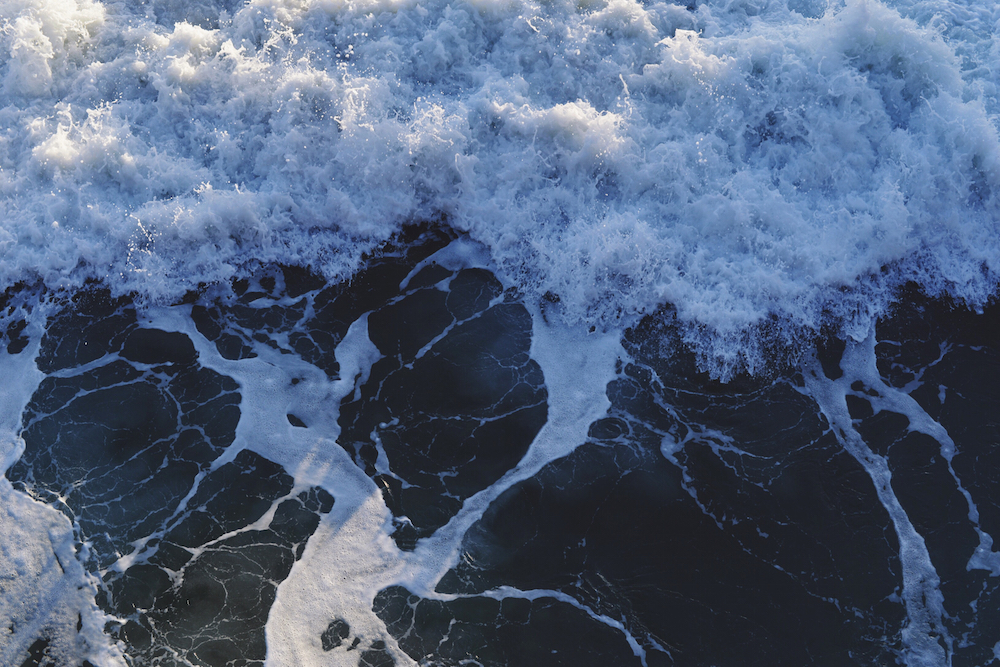 “As much as I like shooting in the city, I really enjoy nature photography—especially anywhere near the ocean. In this case, I especially like how the oncoming waves cast a shadow on the water it’s about to hit. This moment is so fleeting and so specific to the light at that time of day, and there’s so much movement, I like being able to capture so much life.”

Through the Viewfinder :: Behind Gunner Stahl's 5 Favorite Portraits