I’m not sure why, but I’m entirely obsessed with the state of print media, especially when it comes to magazines and newspapers. Nathan Olivarez-Giles asked me about that this afternoon, he’s in the middle of writing a nice article on Ben and I (The Hundreds) for The Los Angeles Times. I explained to Nate that it’s hard for me to fathom a world without print media, considering that much of how I learned about subculture came from magazines. Without the internet or mainstream presence, throughout the ’90s, the only means of experiencing skateboard and street culture outside of my immediate community was through print mags like Big Brother, Transworld, Thrasher, Slap, Strength, Heckler… Mass Appeal, While You Were Sleeping, Giant Robot.. And those books remain with me today, still resonating almost decades after published.

How are newspapers being affected by, and adapting to, web proliferation? How are they responding to popular culture’s obsession with Twitter and other social media? The urgency and immediacy of it all? These were the questions I asked Nate.. After 2 and a half hours of discussion, I realized I was interviewing the journalist more than the other way around. 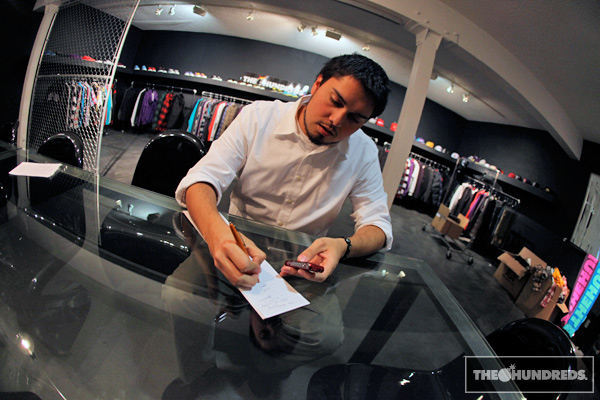 I will expand on one leg of our conversation. Nate asked whether we were concerned about future trends. Since we had caught onto blogging and social media before most brands, and the world for that matter, were we worried about staying ahead of the curve and figuring out what was next?

Not really. Not at all. Because the blog/website/interactive brand was never a conscious strategic decision, although it just so happened to be where the world eventually headed. It was a natural manifestation of who, and how, we are as people. The internet was just the tool to relay that to our customers… The problem with everyone focusing so much on blogging and social media is that those are just the means.. especially if you’re trying to use it as a brand-builder, it won’t make sense unless the people behind it are naturally apt to engaging their community through those tools. But the tools, themselves, are not the answer.

At the end of the day, the personalities are what drive a brand like ours. I’m not just talking about Ben and I, but everyone who works within The Hundreds, their passion, their brains, and their spirit are ultimately what you as a supporter are tapping into. So as long as we have that, the trends will follow us.