The Most Passive-Aggressive Moments on Netflix's Terrace House

Bobby Hundreds included Netflix’s addicting snoozefest Terrace House on his Best Things I Watched in 2016 list, calling it “the antithesis of the American reality genre” (WIRED called it “the future of Netflix”). It’s like The Real World if it were made in Japan and 100% PG and PC. Imagine the complete opposite of Flava Flav’s Flavor of Love with slow, lingering shots and ‘drama’ that’s so extremely subtle you’ll miss it if you blink—that’s Terrace House and it’s The Hundreds’ favorite show right now. 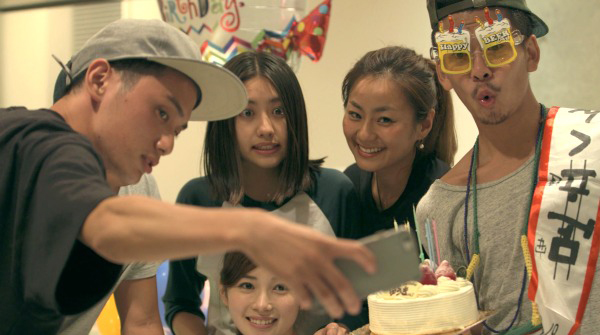 The concept behind Japanese reality show Terrace House isn’t unique: It’s six strangers—three men and three women—picked to live in a house together and have their lives taped. “All that we’ve prepared is a beautiful home and automobile,” the narrator explains at the start of each episode. “There is no script at all.” But Terrace House isn’t just another reality show—it might be the realest reality show ever made.

If I had to compare it to something that came before, it would probably be the first few seasons of The Real World, if the Pucks and Pedros were replaced by super polite and humble Japanese Millennials. Instead of David pulling the covers off a half-naked Tami, the roommates sit down and have an adult conversation about the inappropriateness of sleeping on the sofa. In case that reference is too ancient, here’s another: Rather than Mike and Pauly D drinking Ron-Ron Juice with two blondes and a grenade in the Jacuzzi, the roommates drain their pool and happily sweep out the remaining dirt. Like, is that even a thing? I’ve had a pool most of my life and have never done that once. But that’s what makes the show so unexpectedly great: It’s not just a voyeuristic look into the lives of six strangers—it’s a window into another culture, with customs and characteristics so different than our own.

For example, when 22-year-old hairstylist Tasuya Uchihara enters the house and meets his roommates for the first time, he asks them if it’s OK to sit down, then respectfully adds, “I look forward to living with you.” It’s also common for the roommates to ask each other, within the first few minutes of meeting, about their plans for the future and their “type,” to which most of them answer “kawaii,” or cute (followed by people who work hard and tall people). It’s these sorts of gentle mannerisms that also make Terrace House a mirror, reflecting back my own bull-in-a-china-shop Americanness. It’s also, perhaps, why I’m responding to people these days with a staccato “hai,” and a subtle head nod, and why my friends are texting me random messages like, “I wish there were more Japanese restaurants out here that were legit. Like, catching your own fish and making soba noodles.” 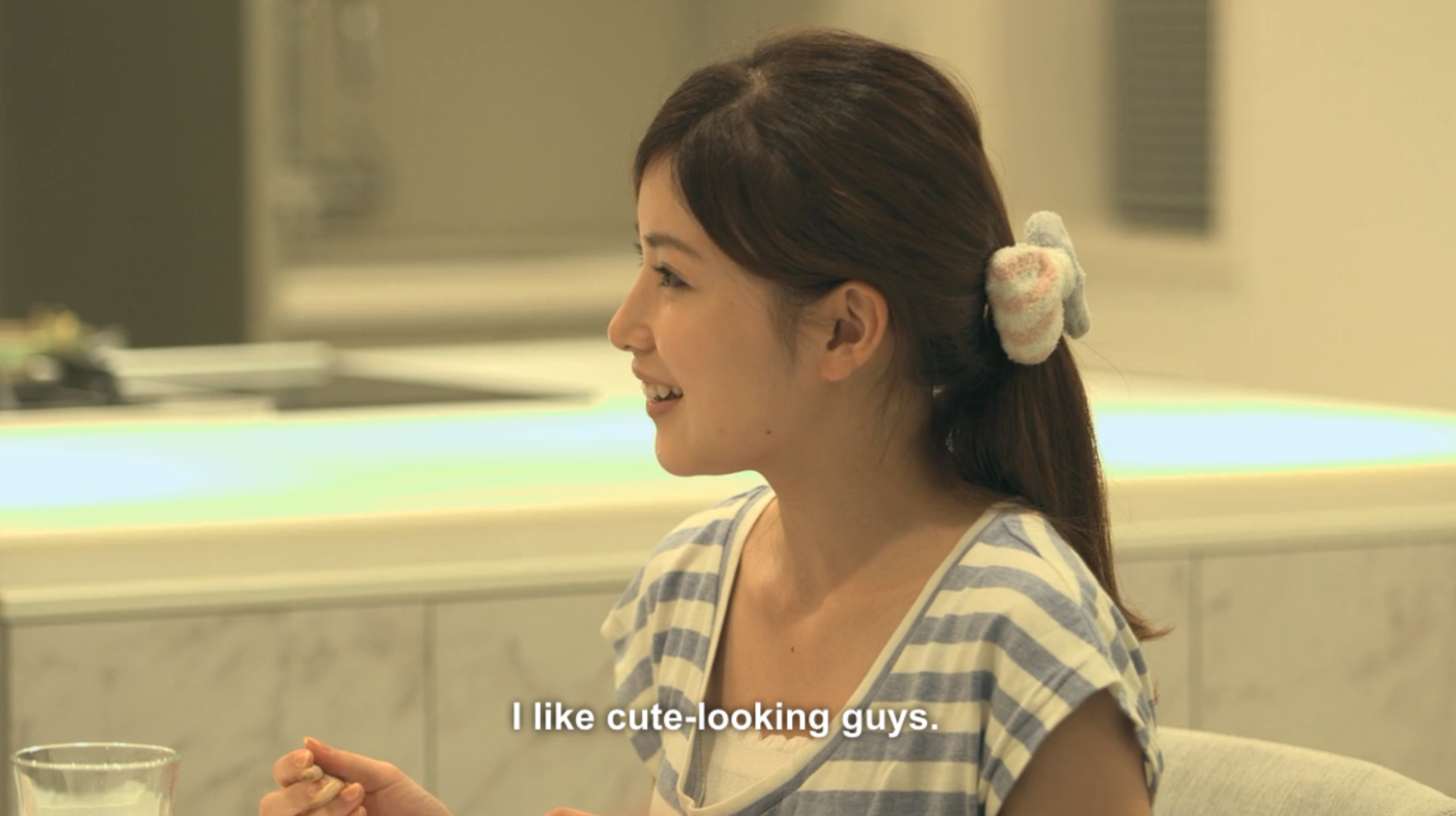 But, just because they are better behaved, better dressed (in brands ranging from Parra to CE), and eat better (their home-cooked meals often look like scenes from Jiro Dreams of Sushi), these people aren’t perfect. Though they’re quick to discuss any issues that arise and find a calm and simple resolution, they also suppress their emotions and true feelings, which stifle their friendships and relationships (weeks in, one couple hasn’t even kissed). This leads to a range of extremely subtle passive-aggressive behaviors, ones which wouldn’t even register on the American reality-show Richter scale, but seem deliciously shocking on Terrace House. So, in anticipation of Terrace House: Aloha State, which will be released on Netflix on January 24, here are a few of our favorite passive-aggressive moments from the past season.

From Jock to Jerk 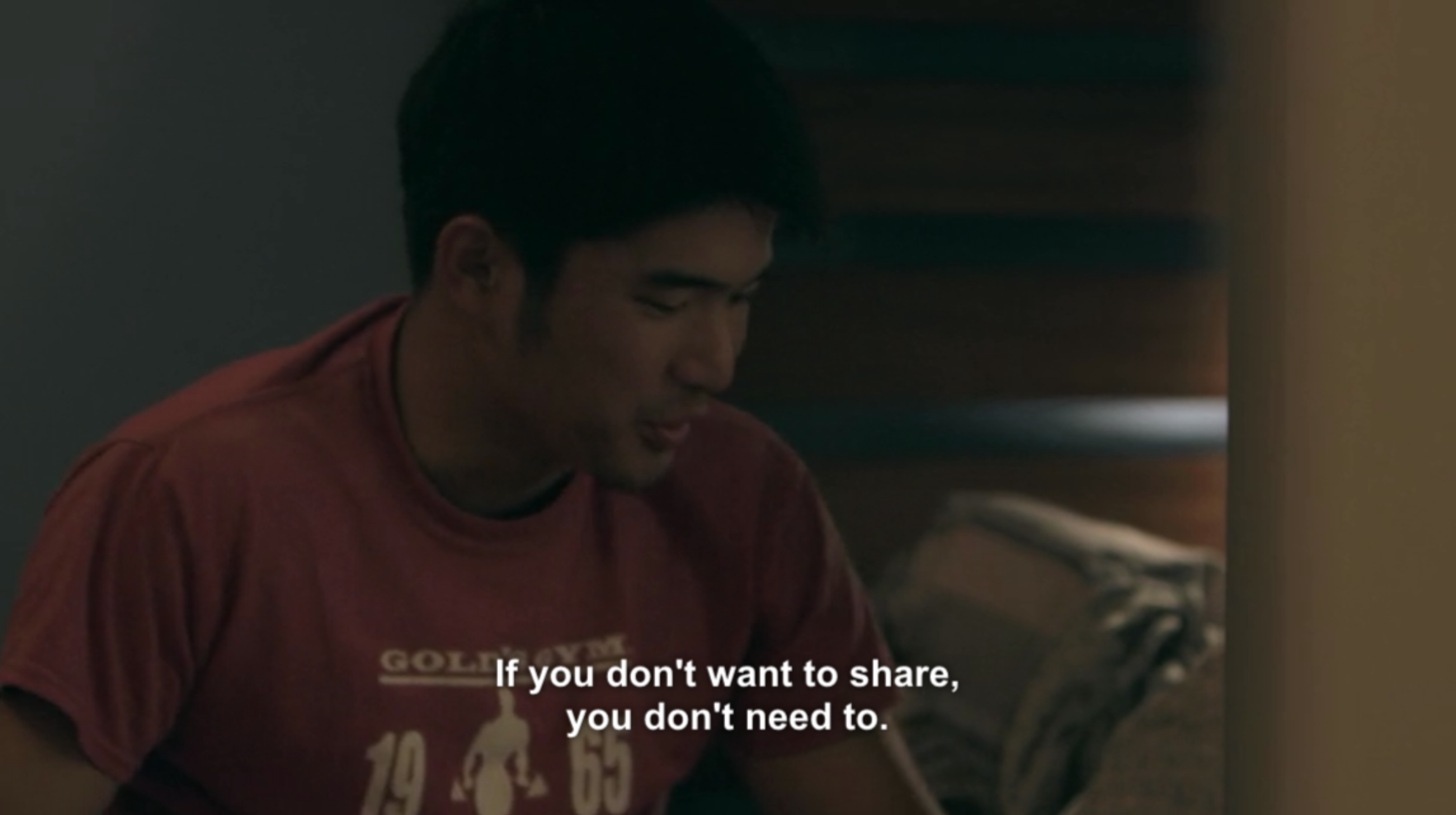 When Makoto first arrives in the house, all the girls like him. He’s tan with shaggy hair, wears RVCA tees and boardshorts, and plays baseball for his university. He also chivalrously apologizes to Mizuki for not defending her in a discussion with another housemate, and then tearfully admits that he hasn’t been taking baseball as seriously as he should have been. But, after Uchi asks out the girl he likes, Makoto starts to show his true colors. He texts Yuriko what Uchi told him in confidence (that their date “took a lot of effort”), which causes the doll-faced doctor-to-be to cry. Then, when Uchi tries to talk to him about it, Makoto is flippant and doesn’t even offer an apology. Uchi tells him that he might not share his thoughts with him in the future, to which Makoto retorts, “You don’t need to.” Makoto then gets even messier, confessing to Yuriko that he’s lost interest in Minori, but then, giving Minori a new pair of pink Nikes the next day. But, in the end, Minori rejects him, because he’s been secretly eating junk food, and not being serious about baseball like he promised he would be. Sorry, player, you’re out.

Tap Dancing on Your Dreams 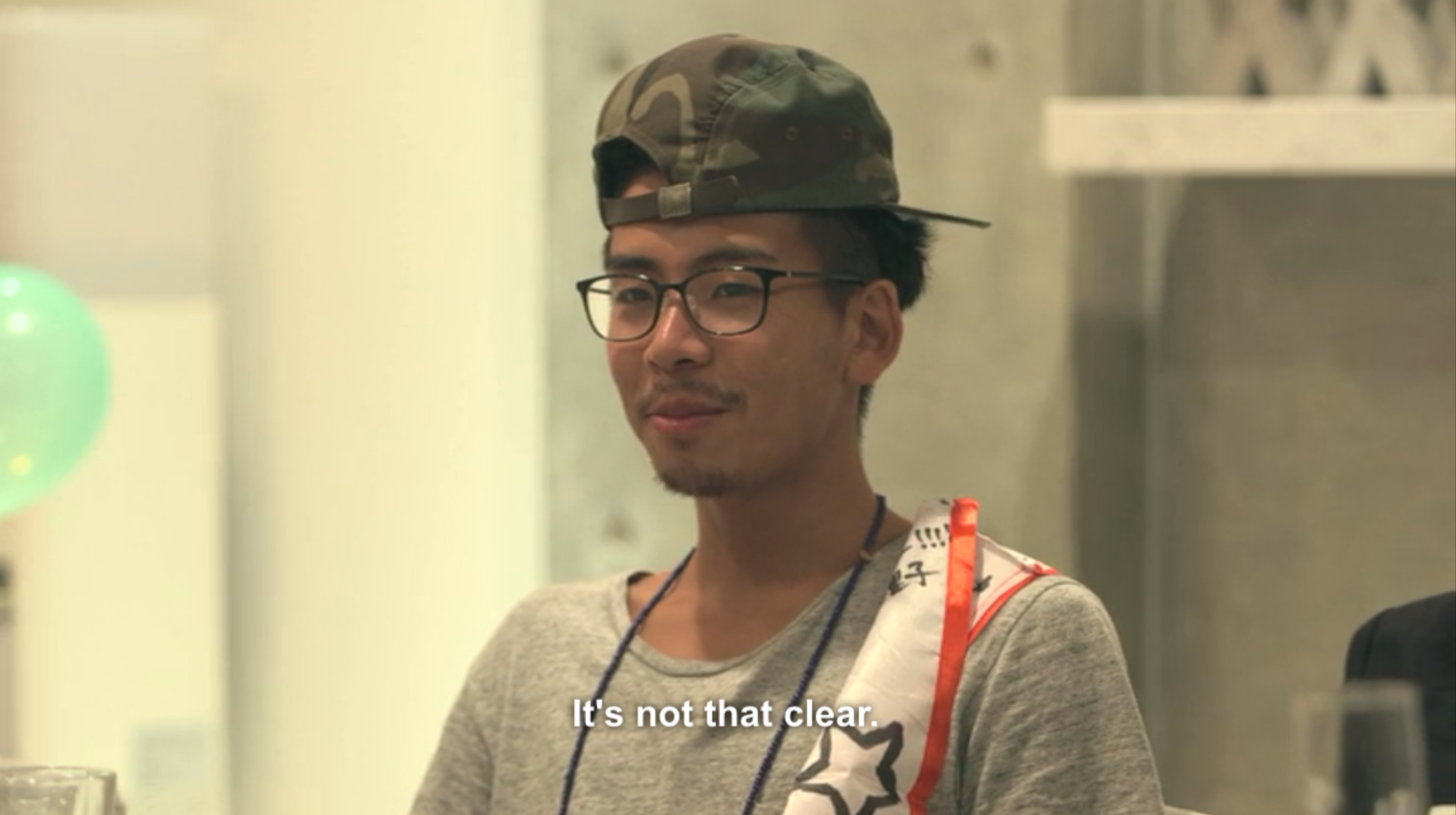 Everyone in the house is concerned about their plans for the future, but none as much as Yuki. He’s constantly asking people about their goals, and saying annoying things like, “I don’t want to just play house here.” If he were an aspiring doctor or architect, like other people in the house, maybe he would get a pass. But the kid is a “professional” tap dancer. What does that even mean? It means he teaches tap dancing to little kids and performs at hole-in-the-wall restaurants. He acts self-assured about his future, but it’s a front for his insecurity.

When he asks office worker and part-time barista Mizuki about her future plans, he delicately shits on her dream of owning her own coffee shop. “I kind of spaced out,” he tells her. “Like, I wasn’t getting anything even though you talked a lot.” Mizuki, who then starts to cry, says she thought she would work really hard, and then get married in her 30s. “Well, it’s different for a man than it is for a woman,” Yuki says, making a face. Dude, you’re a tap dancer. Everything you have ever done or will ever do is irrelevant. Luckily, Yuriko later tap dances on his heart: She uses him for free tickets to an expensive jazz venue, and then tells him at dinner that same night that she wants to get back with her ex. Ouch. 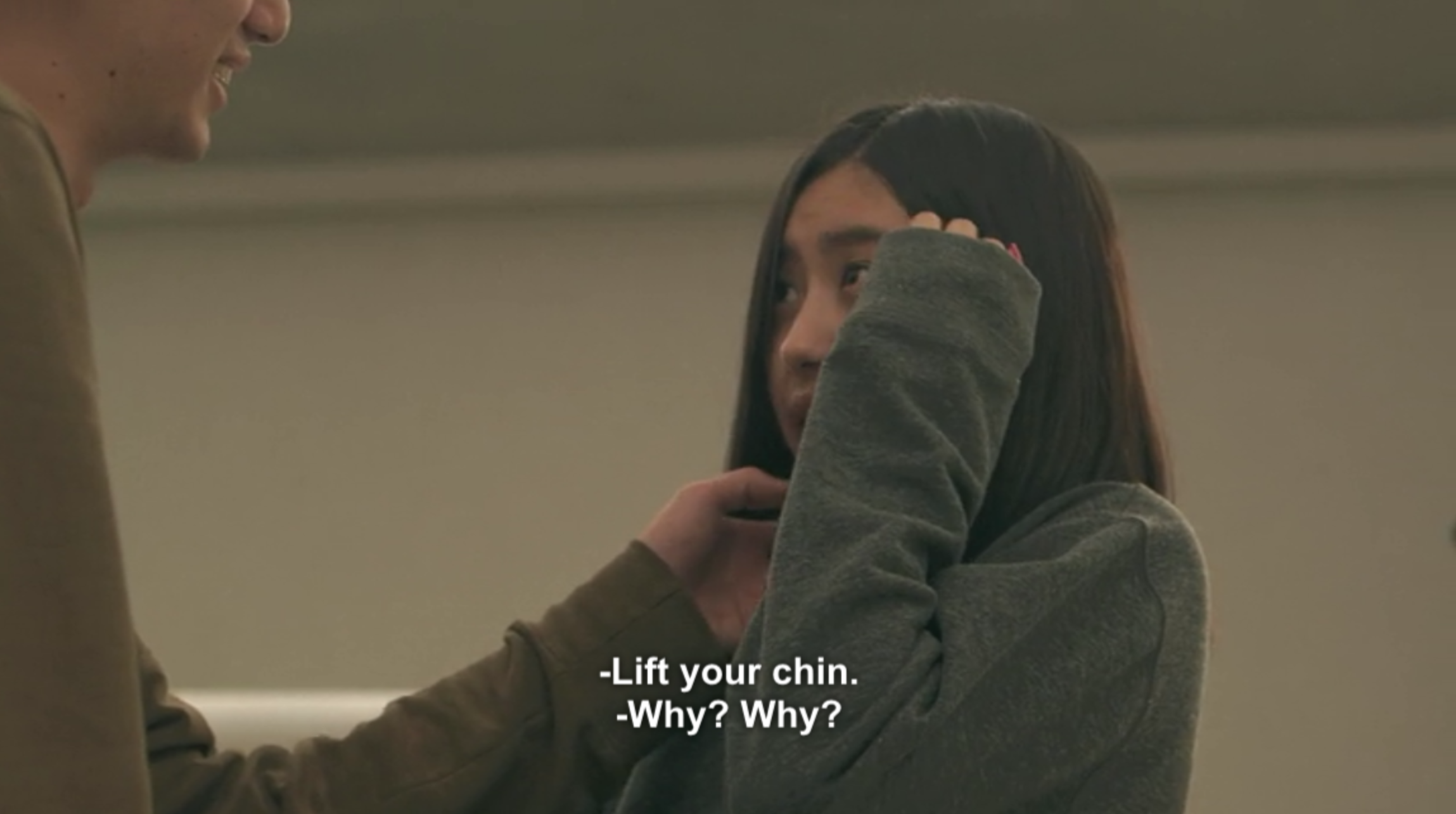 Uchi and Minori have been dating for weeks, but still haven’t kissed. The closest he’s even gotten to her lips is when he was giving her a scalp massage, and she had a hot towel covering her face. She tries to confront him about being “vague,” and not saying or doing what he’s thinking, and he promises her he’ll work on it. But after things still don’t change, she makes him an omurice, and uses ketchup to write “coward” on top of the egg. The thing is, she leaves it on the table for him to discover on his own, and then hides in her room with the other girls. When he comes up talk to her (and first asks permission from the girls, of course), he tells her to close her eyes and lift her chin, and she just hides her face in her hands. “I’m scared,” she cries. Girl, please, who’s the coward now?

[Ed. note: Although Minori was somewhat of a hypocrite, we will say it was kind of creepy how Uchi wanted to kiss her in front of the other girls—and how firmly he held her chin to do so.] 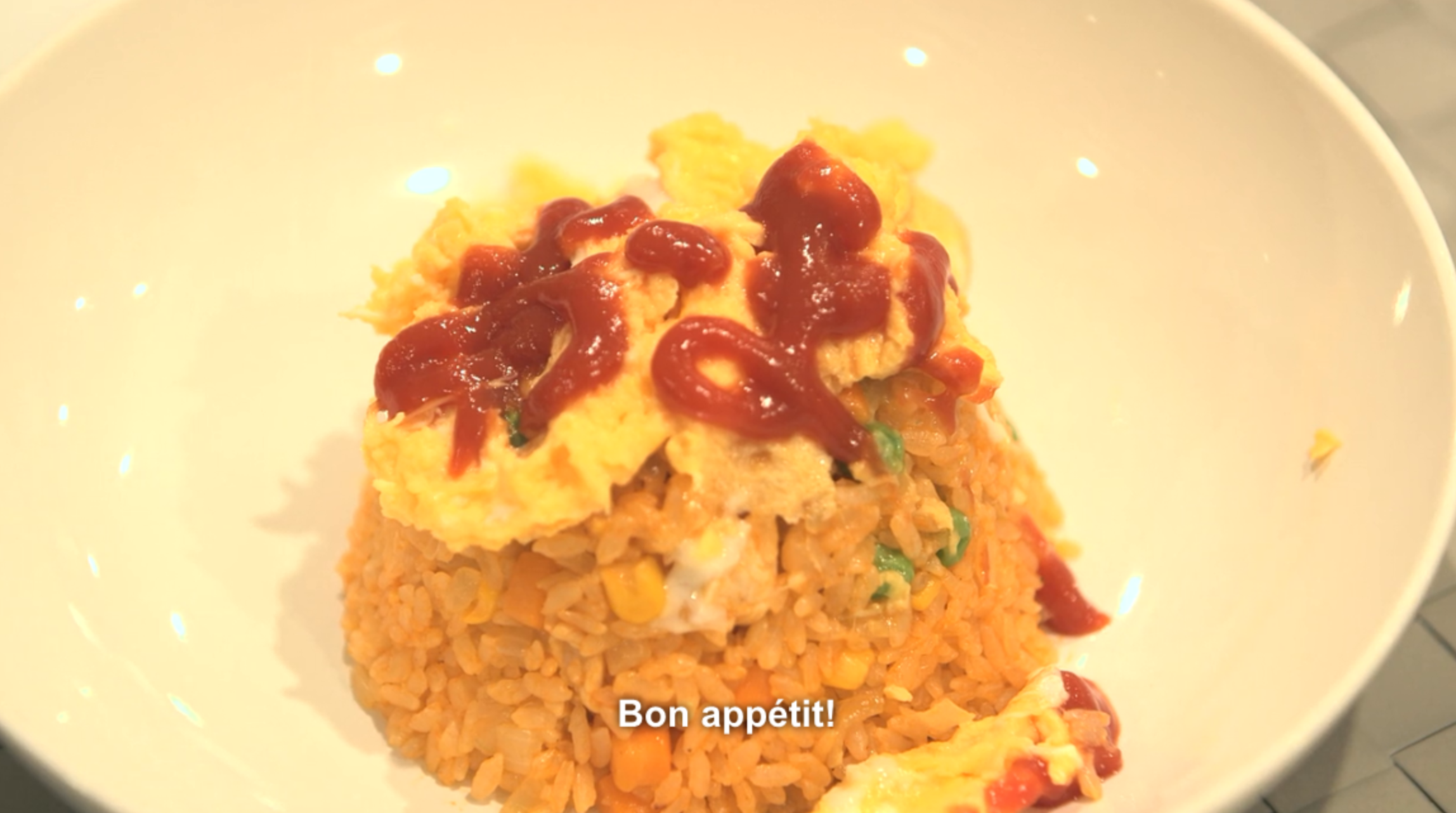