Yesterday was the official in-store launch of theThe Hundreds by Travis Millard collection, consisting of graphic tees, snapbacks, a crewneck sweatshirt, and a goat head belt inspired by the Fudge Factory Comics logo, and featuring designs that both honor The Hundreds’ heritage, and offer new insight into the idiosyncratic illustrator behind the collaboration. Read on to learn about The Hundreds by Travis Millardthought process and to see some photos from the Rosewood retail launch.

Rosewood store managers got first dibs. Don’t be jealous. There’s plenty to go around… if you hurry: 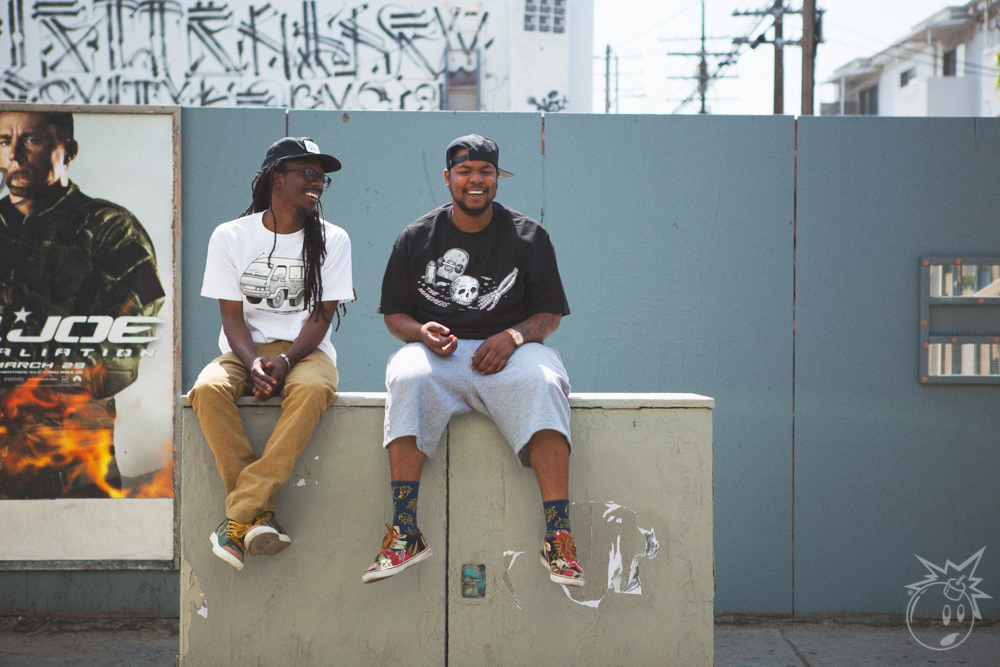 The skull/bones/skateboard/spray can combo graphic is an homage to the Rosewood store installation that we literally built with our own two hands. Okay, we’re bluffing a little bit. We didn’t actually construct it with own two hands, per say, but so much of our blood, sweat, tears and semi-adult supervision went into the launch of our first-ever retail location, that it really feels like we did. Also, just so you know, this guy is not dead or passed out or even resting, he is just doing a performance art piece to demonstrate the sentimental origins ofThe Graveyard t-shirt. Get it? Good. 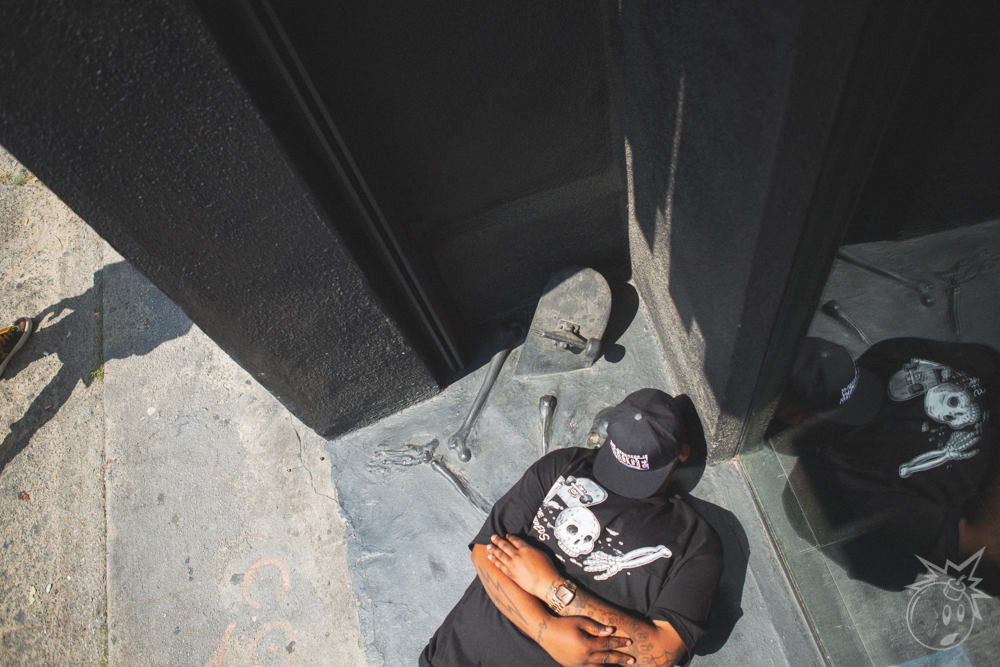 Equally nostalgic isThe Rambler t-shirt(on the right).Travis Millard is a fascinating dude with a deep-seated affection for vans (pun-intended), probably stemming from the fact that he spent a significant amount of his childhood traveling around in one of these babies with his father. He says, “I’m sort of a fan of vans. Growing up my dad was a Wrangler jeans salesman, and we always had conversion vans. He would hollow the back out and drill metal bars in the ceiling, and would stack jeans and shirts and drive them to mom and pop shops around Missouri. I would go on trips with him sometimes…I would just listen to my rap tape on my Walkman and draw.” So that explains it. Roadtrip anyone? 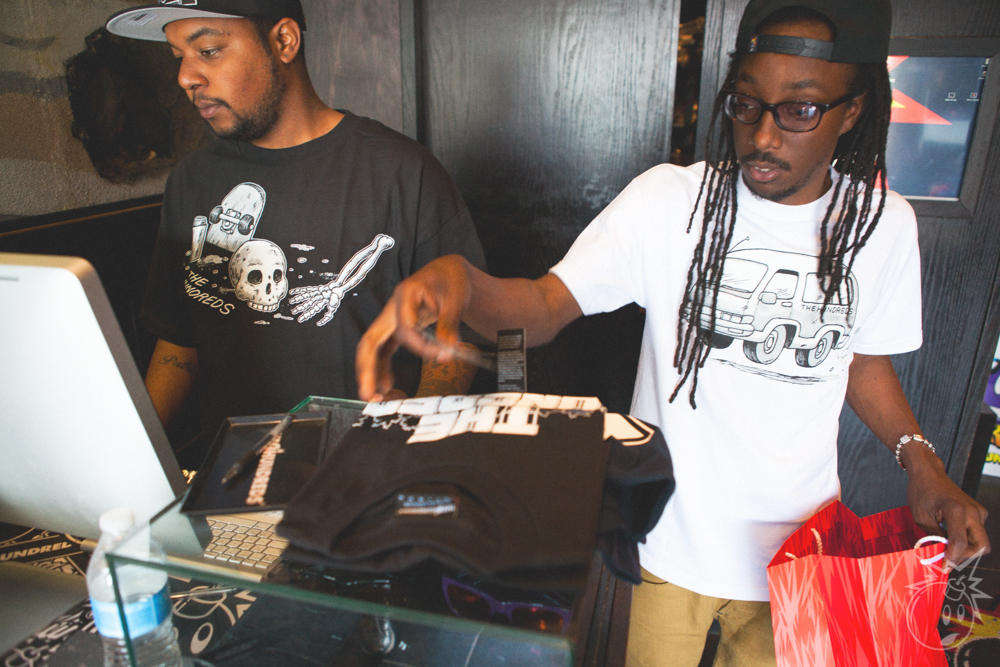 Who do you think would win in a fight? Bob or Ben?

– Travis Millard on the “Bobby and Ben” t-shirt: 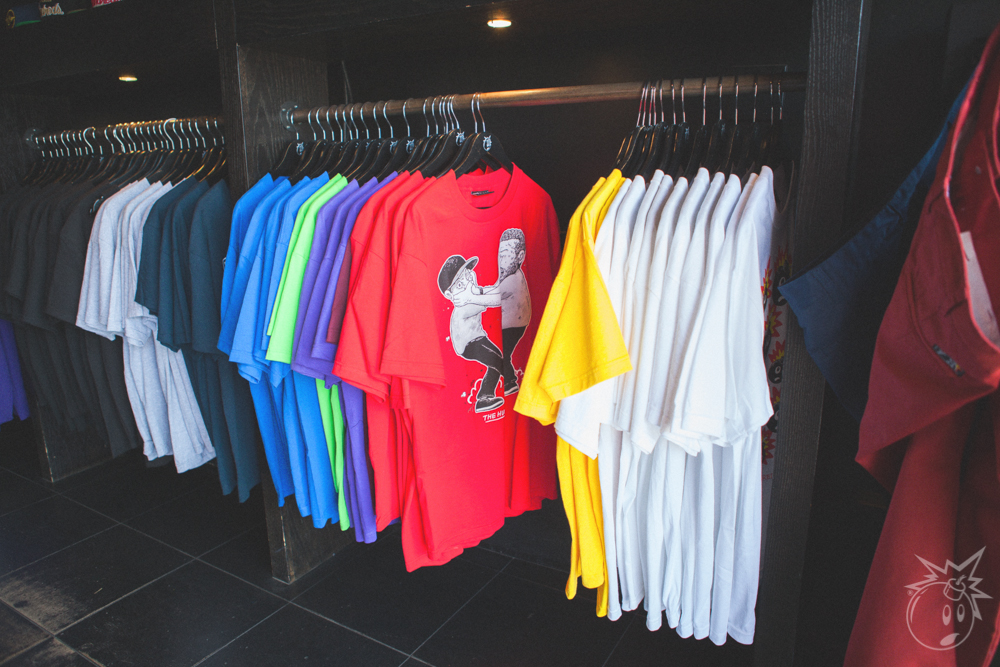 The Hwood t-shirt is how we envision the future for us. We’re taking over Los Angeles, la the genetically engineered robots in Ridley Scott’s sci-fi masterpieceBlade Runner. Only our alternate reality looks less like an iron and steel metropolis, and more along the lines of a lush oasis where palm tress outnumber people. And we’re taking this kid with us for back up. The front of the shirt features a reappropriated image of the world-renowned Hollywood sign modified to read “The Hundreds” instead. 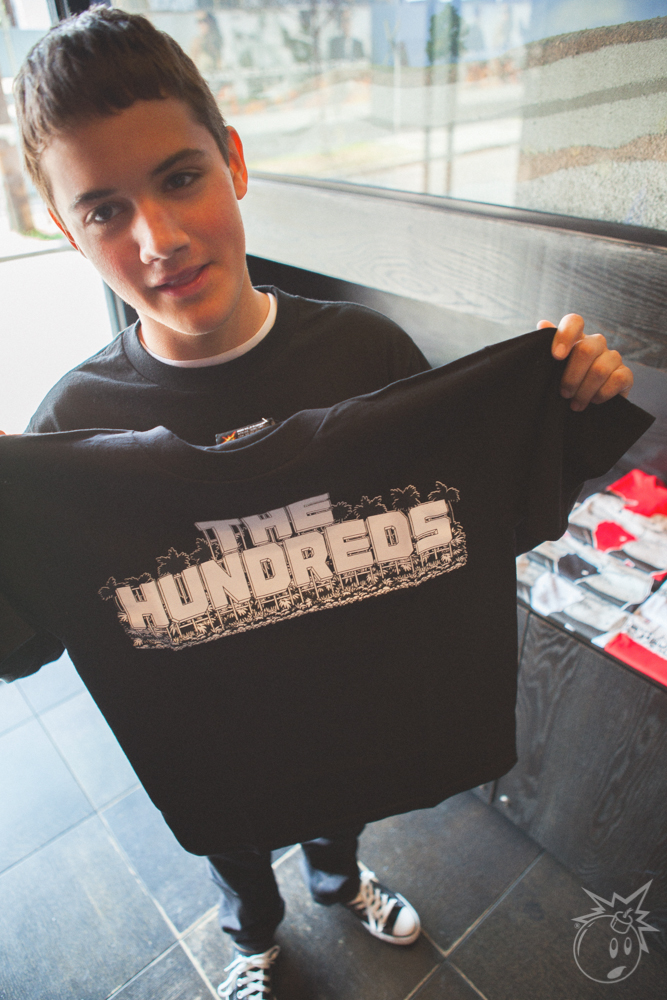 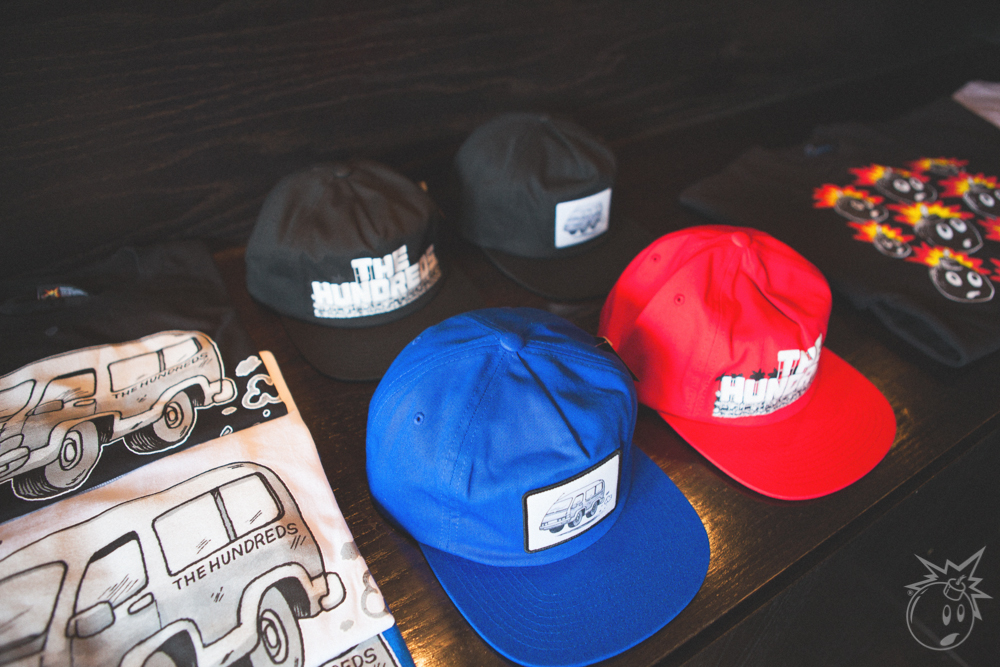 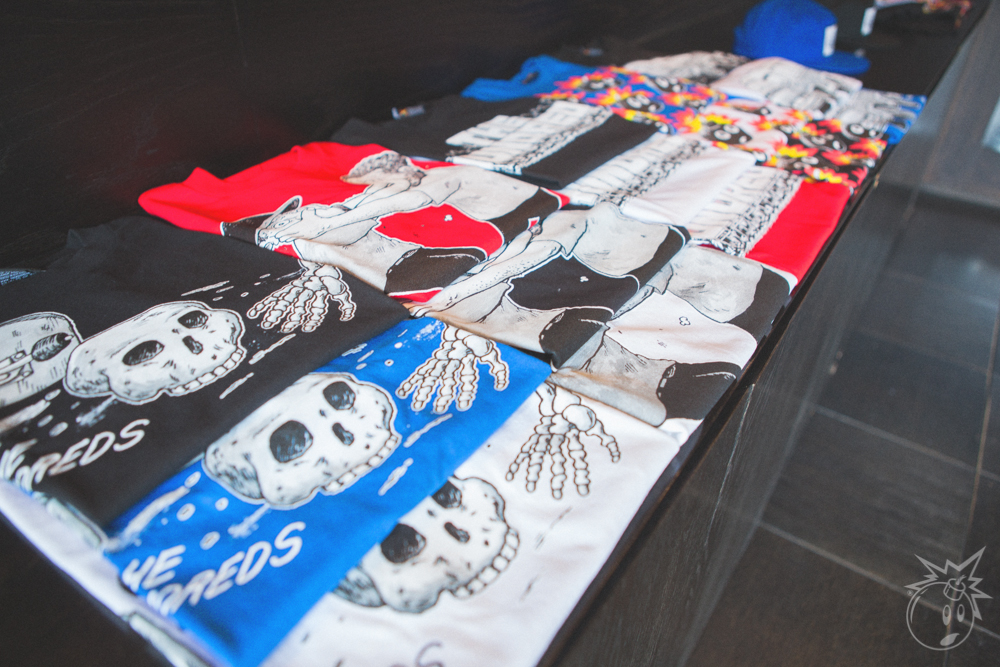 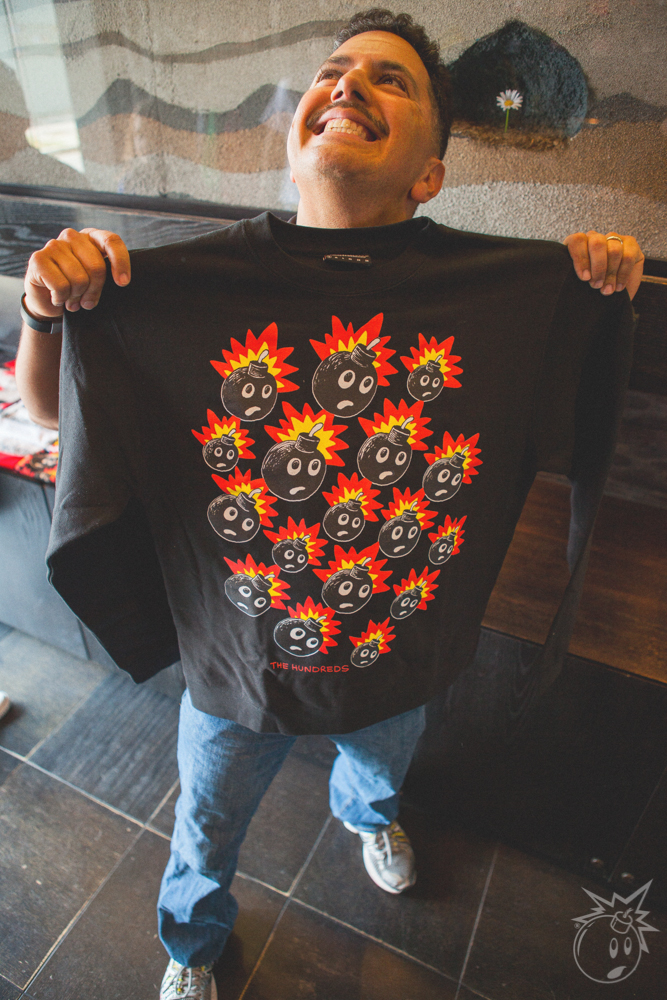 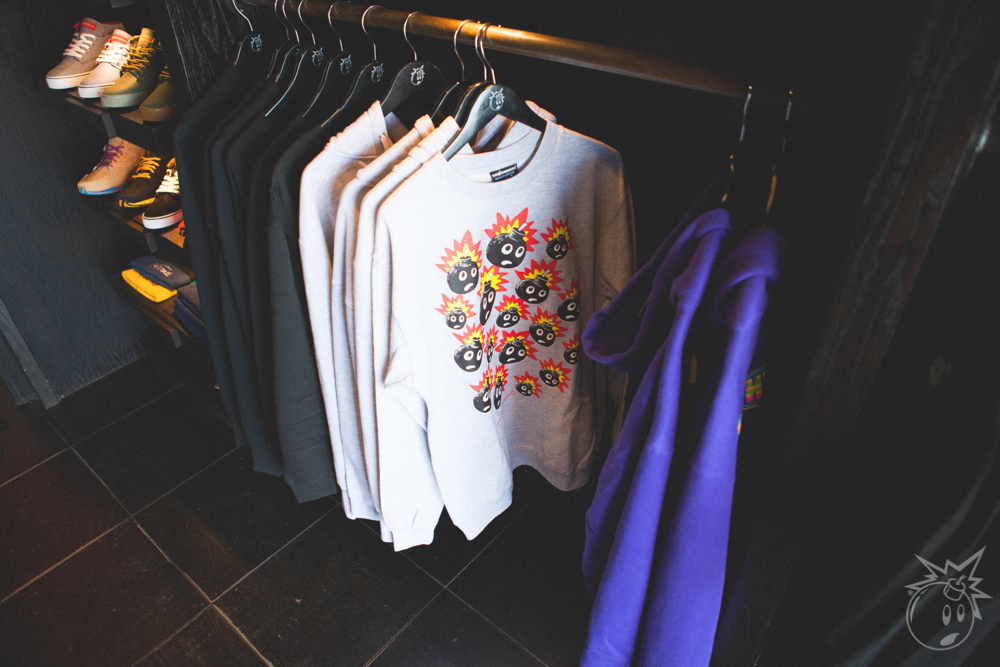