One of the strongest indicators that a subculture has surfaced in the mainstream is the media’s, and surrounding industry’s, eagerness to construct labels. This usually comes at the reluctance of the true, who are fast to shun any mediated classifications but also subsequently mimicked by a slew of copycats who are fast to embrace, and re-appropriate, the identification. Nirvana and Mudhoney were cautious about being tied to the journalist-concocted “grunge” speak, as Jimmy Eat World and Sunny Day Real Estate were with “emo.” But everyone knows the ensuing plethora of bastardized clones that followed in their footsteps, eventually distorting the label to the point where it became unrecognizable compared with the original identifying characteristics.

“Streetwear” is no exception. When it comes to the most misunderstood category in youth fashion, it seems as if everyone involved in streetwear’s day-to-day is prepared with their own explanation, which is overwhelmingly divergent from his neighbor’s understanding of what it actually means. How can that be? When all the national urban chain stores are converting to “streetwear” accounts, with the corporatized hip-hop brands following suit, and their customer base suddenly turning “street,”… with fashion trade institutes educating their students that “streetwear” encompasses all “edgy” metro attire… when your local skateshop and favorite skate companies are realizing that skateboarding’s not as profitable as it once was so they’ve decided to turn “street”… and tradeshows dump Rocawear-ish and Paul Frank-esque brands into the same STREETWEAR arena, it appears that streetwear has evolved to become an umbrella definition for any clothing line composed of t-shirts and hoodies. Which basically means that this is streetwear, as well as this.

But we know that’s not true. As far back as I can remember, the modern concept of streetwear (at least the kind that is propelling the industry at the moment), was rooted in the independently-run t-shirt-based brands from the 90s-era LA and NY skate/graffiti scene. You know the brands I’m referring to.. they were kickstarted by rogue artists and designers who sought the limited exclusivity of high-end couture fashion houses and incorporated that into t-shirts and other skate-related clothing. 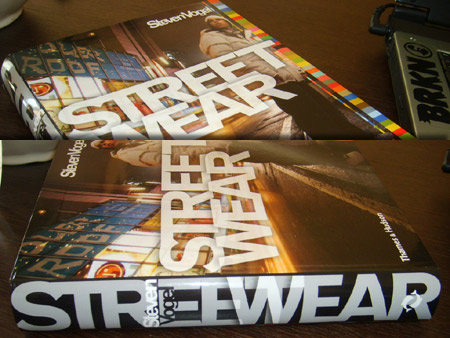 It was about time that someone encapsulated that true essence of the original streetwear movement into a published book. Simply titled “STREETWEAR,” Steven Vogel’s work is by no means a Streetwear 101 textbook, but rather a personal account of some of streetwear’s most noted founding fathers and devoted students. With narratives contributed by everyone from Hiroshi Fujiwara to Erik Brunetti, Vogel establishes that this book is the furthest thing from a strict streetwear definition. But perhaps this is the first step towards doing exactly that.

Check out Steven’s blog for more updates about the book, published by Thames & Hudson.