You might remember Senay from his contributions to our DISPOSED series, the time he interviewed Antwon with Alina, or the times he’s contributed photography to the stories on our site. A storyteller and street native at heart, he’s here to share tales from the fringe – this time, in Rio de Janeiro, Brazil. Read part 1 here.

Empty malls are where American Exceptionalism goes to die.

I’m at Barra World Shopping in Rio de Janeiro, a dead new mall recently built filled with hundreds of shops. Homes to nonexistent dummy companies that have sprouted up in preparation for the upcoming Olympics in 2016. It has dozens of wings dedicated to “cultures” that the local culture in Brasil tries their best to imitate—usually in the form of subpar restaurants.

I’m in the Italian wing at a faux cafe trying to reconcile myself with that tragic loss Brasil experienced the other day. This was a national holiday here. They literally shut the city down and people didn’t go to work to get ready for that game. Rio de Janiero at 1pm looked like a scene out of Silent Hill. I went to the grocery store though, and it felt like Christmas Eve in that one movie Sinbad did with the Terminator!

I talked to the store manager who became my homie after I met him down the street in the favela where you go to buy the fresh baby coconuts that got the real sweet juice. He told me they put a rush order in the night before because they expected a few thousand people to come through their doors.

This is the big fake sphinx they have in the Arab wing of the mall.

Like, yeah, I dyed my whole head green and yellow, don’t fuck with me. This is something that goes behind nationalistic pride in a nuance game played between nation-states. I mean it’s everywhere. People are playing at all times. The beaches, the parks, in the slums, in the rich country clubs. Parents give their babies necklaces of little soccer balls. It’s that much of an integral part of their worldview.

Think about our obsessions with guns in America and multiply that. This is something that unites clans in the warring neighborhoods, whether you’re for Botafogo, Flamengo and Fluminesce. This unites a country every time the World Cup comes around. If you would ask me what best represents the spirit of this country, I would reply easily, “The beautiful game.” And I witnessed the pain in that first half.

Five consecutive goals in eighteen minutes. I couldn’t believe my eyes. Is this the game, or are we playing FIFA? Even Denzel Washington in Glory didn’t get whipped that bad. I saw grown men pull their hair out and roll on the ground crying their hearts out. There were no fireworks going off on Tuesday. I’ve never seen so many people so affected by something not related to death. But in a sense, this was death to them. The end of their country’s chance at the championship. FIFA’s zooming in on all the people crying is nothing compared to the people on the streets.

I saw bands of men with machetes chanting, “Death to fascists!” after the loss to Germany. And while a tiny part of me—for the love of a story—slightly wanted to see some mayhem occur (the military police came out in droves as a riot was highly predicted on the news here), I was very relieved that a heavy tropical rain started to pour almost immediately after the game ended. That timing was too perfect. Those Europeans in Copacabana Beach didn’t know what was coming after them. 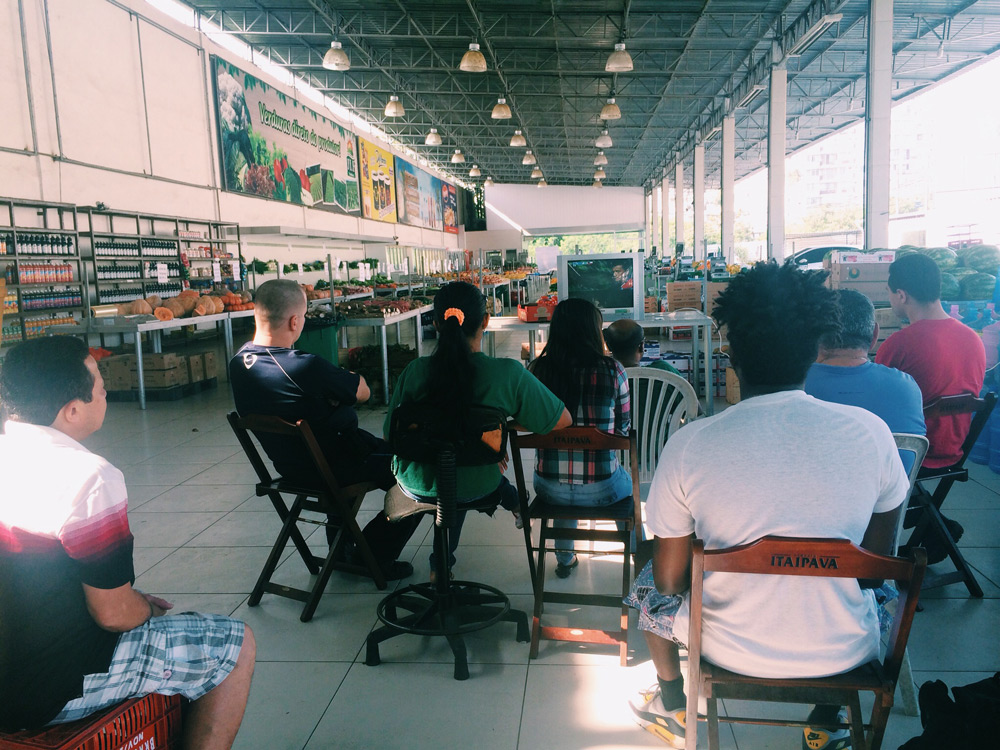 I’m walking out of this cafe I steal wifi from (I had to sweet talk this bagel lady to give me the password) when I hear these sirens and loud commotion behind me.

You seen Kings of Comedy right? You know we be running before we know what we running from! I played it cool though. Blended in with the crowd, used the locals as ‘subterfuge’ (learned that from Metal Gear Solid). Next thing I know, I’m in the middle of this huge gay parade that the Drag community here in Rio had spearheaded. Having nothing better to do, I walked along with them. I was hoping to get some free food out of the whole thing to be honest. My homie was like, “I don’t know, bro, if you should throw this in, the write up might be kinda sus.” But yo, real talk they were dope! Never seen so much sequin in my life except for that one time I sat behind Chaka Khan and Whitney Houston at this Prince concert at the Forum.

They had command of the whole street. Traffic was dead behind them. Yeah, people were catcalling them and yelling slurs, but nobody got in the way of the procession. This drunk German stumbled out of a bar and was hassling someone in the march and man, he got mollywhopped by this one super tall lady in a badass shiny hot pink number—one of those joints the Supremes used to wear back in the day and I do believe that was the end of crowd participation. It was just so powerful to see that they had organized all the rival drag houses to march down the main party street in Lapa through the tourist’s areas to remind everyone that they were there and a part of the city’s culture. Could have been a scene out of Paris Is Burning.

I spent another day in Jardim Botanico…

Where you can find a botanical garden built by the royal family who ruled in Brasil after Napoleon chased them out of Portugal during the early 19th century. They got a huge lake in there called Lago Frei Leandro filled with these big water lilies where I took a lot of people’s new profile picture for Tinder I’m sure. 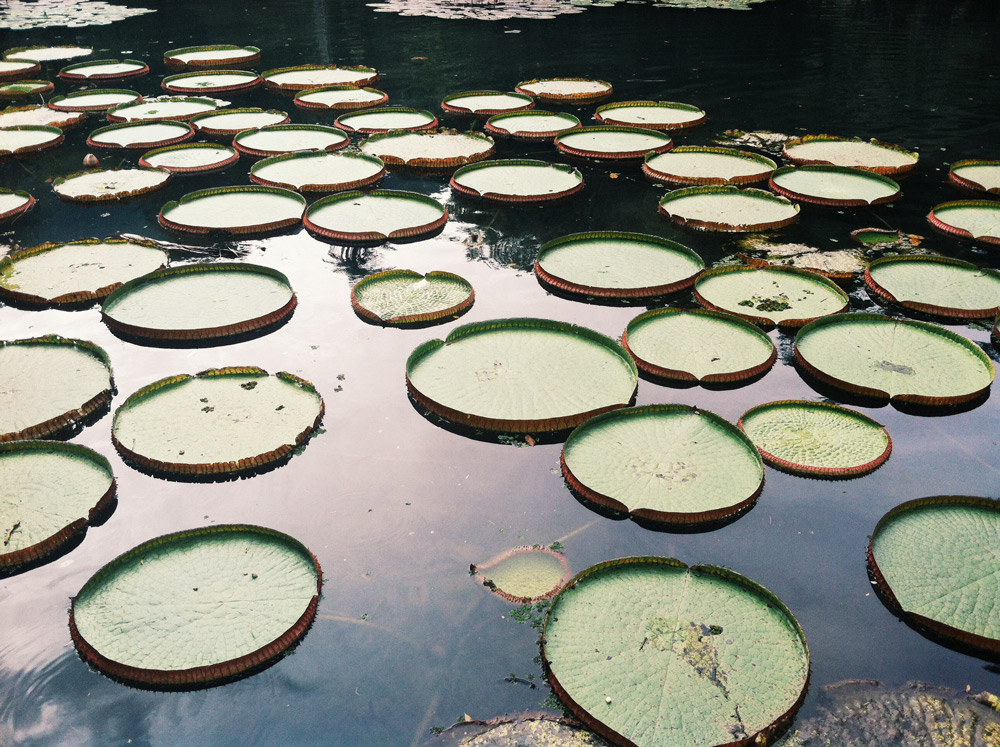 Great adventures in nature need to be documented when thousands of species of plants from all across the world have been shipped and planted for my enjoyment that’s his I’m feeling. Had me run into some muchachos hanging out in a huge tree above this giant fountain dedicated to Narcissus throwing down fruit at everyone who looked into the water. The irony kills me. 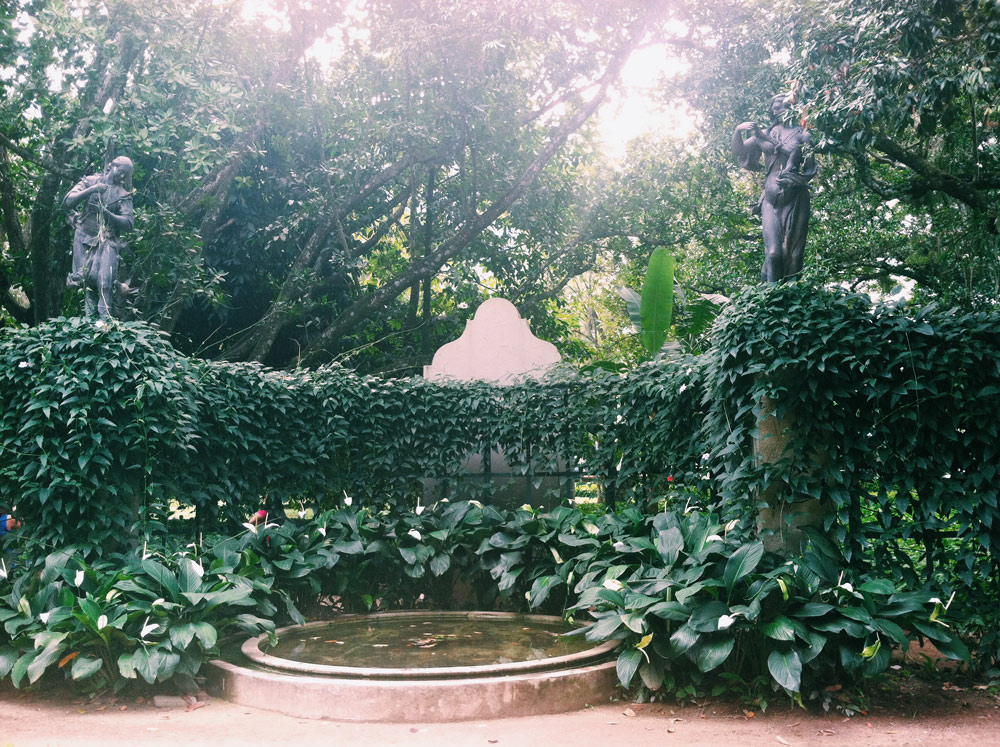 It was a hour long bus ride to the Gardens. It’s right underneath the Cristo Redentor, the huge Jesus statue on the top of Corcovado mountain. I got lost on the way back and ended up walking all the way down to Lago Rodrigo in Leblon where all the rowing races in the Olympics are going to be. I always know how to entertain myself in moments like these. 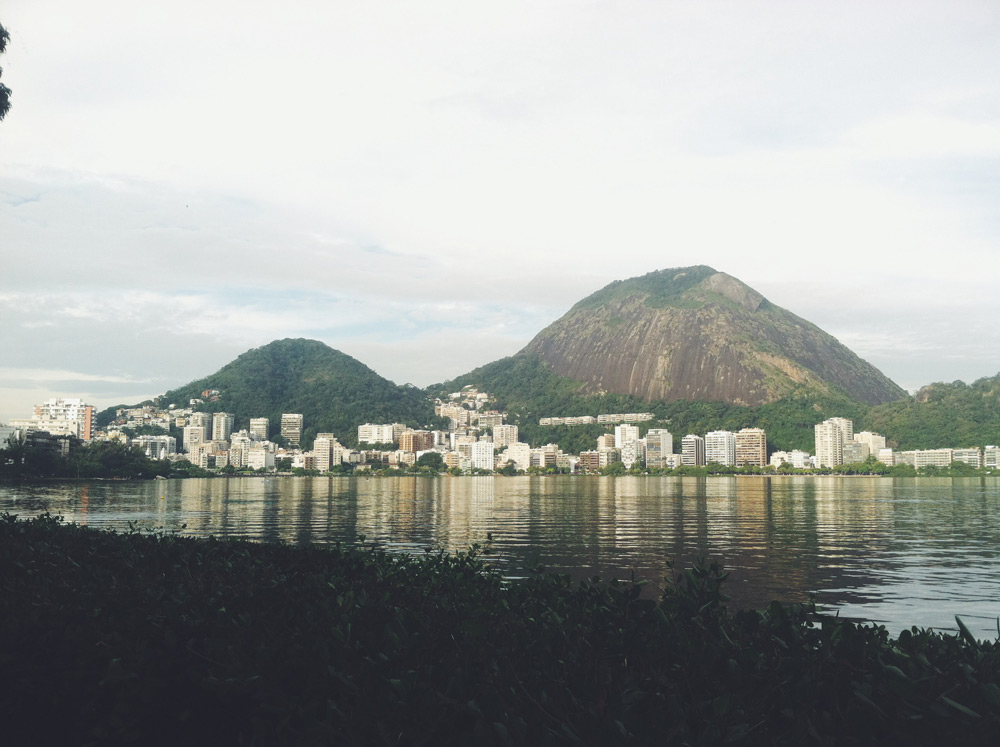 I’m really keeping an eye out for the graffiti though.

Whenever i make new friends here, the first thing I ask them is to tell me where the graffiti is. If they don’t know, they’re a lame. Rio’s street art scene is insane. I’ve never been surrounded by this much art in my life. This is my paradise. I always read in books and street mags how intense the game is out here but just to be here and experience it myself is a whole different beast.

If you are a graffiti writer, this is where you need to be! Think of the days of Beat Street before Ramo got merked on the train tracks. Style Wars times ten. There are miles upon miles of murals and huge pieces that cover the city that are untouched. In my two weeks here, I have yet to see a buff crew making the rounds. Most of the walls for houses are covered with the local pichacao graffiti style, which is heavily influenced by the indigenous culture here. I am not exaggerating when I say that there is about as much art on the streets as there are advertisements. Rowdy Roddy Piper in They Live would of smiled at that one. 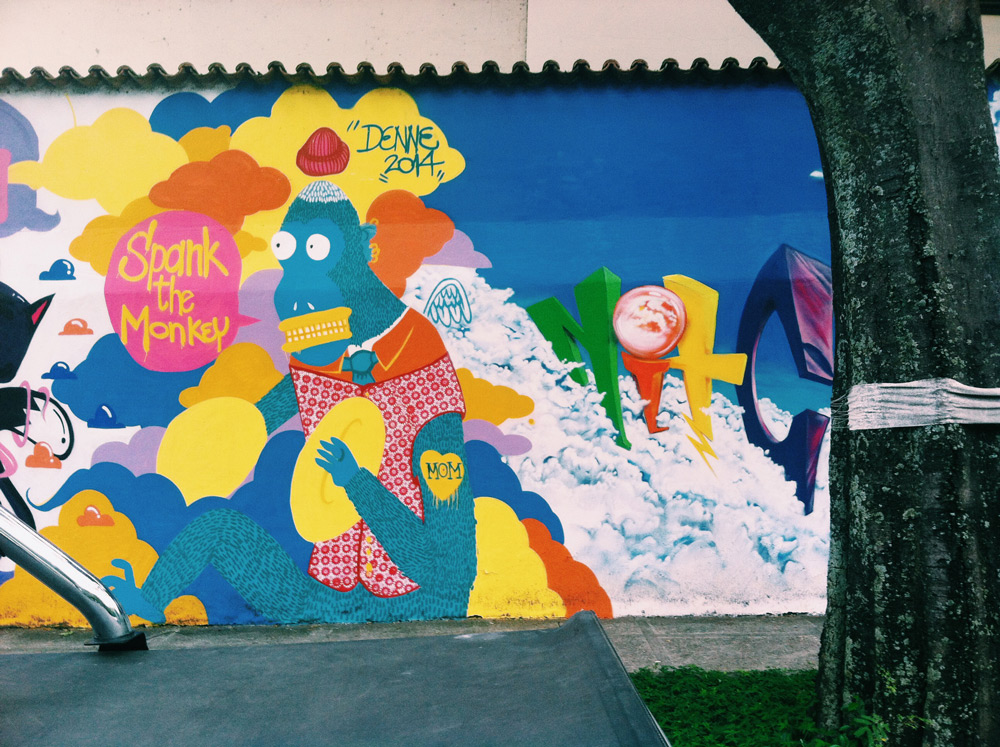 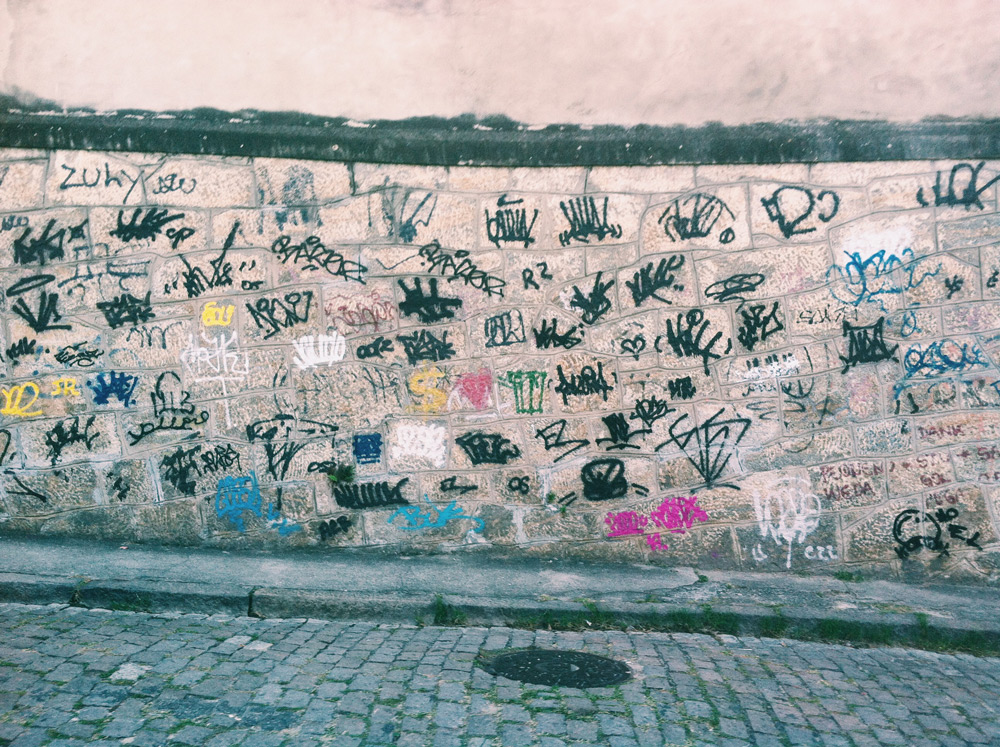 I was downtown mobbing through centro where the police presence is the heaviest because of the Cup. I ran into a OG on the streets, Sabio from the TWD and I was chopping it up with him and his homies while they were setting up a piece. The cops rolled up and I got spooked and started to run to hop the fence, but the cops just waved at us and drove away.

It was at that moment that I truly recognized how special this city will forever be to me. I’ve spent my whole life writing and tagging with my friends and family, burning my tag books because some joker wanted to snitch on me, getting chased by rival crews and crips and bloods and police and big ass pit bulls and Rottweilers and cracked out homeless people in Amtrak yards—and here I am in broad daylight in the busiest part of Rio De Janiero and the po po just smile and proceed on with their day like it’s no big deal. It is a big deal. 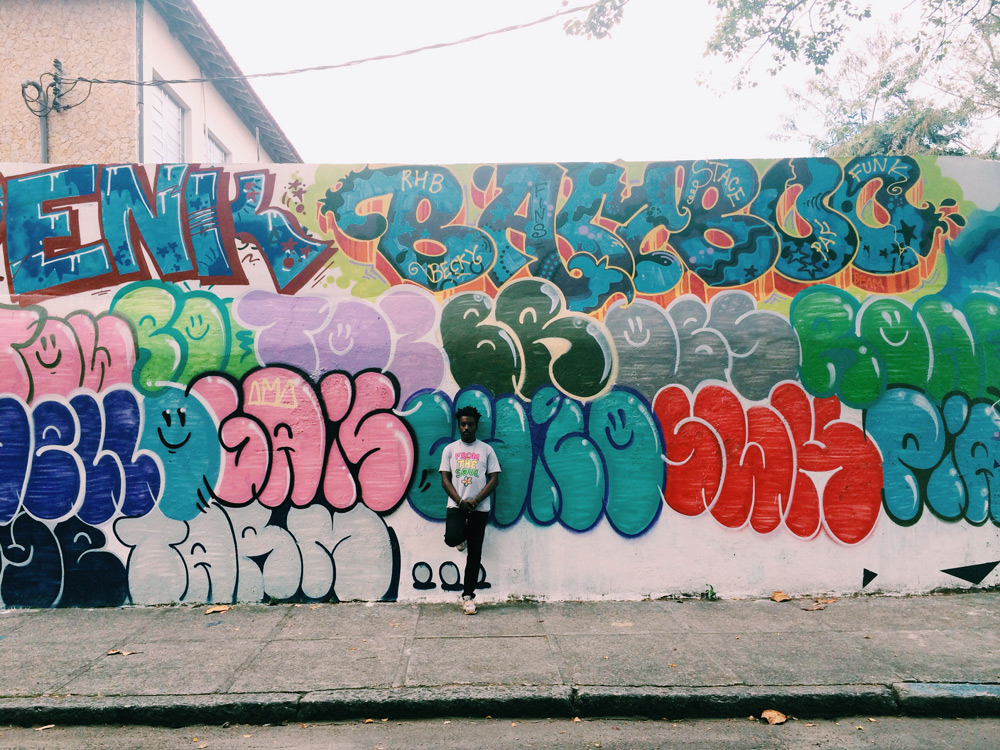 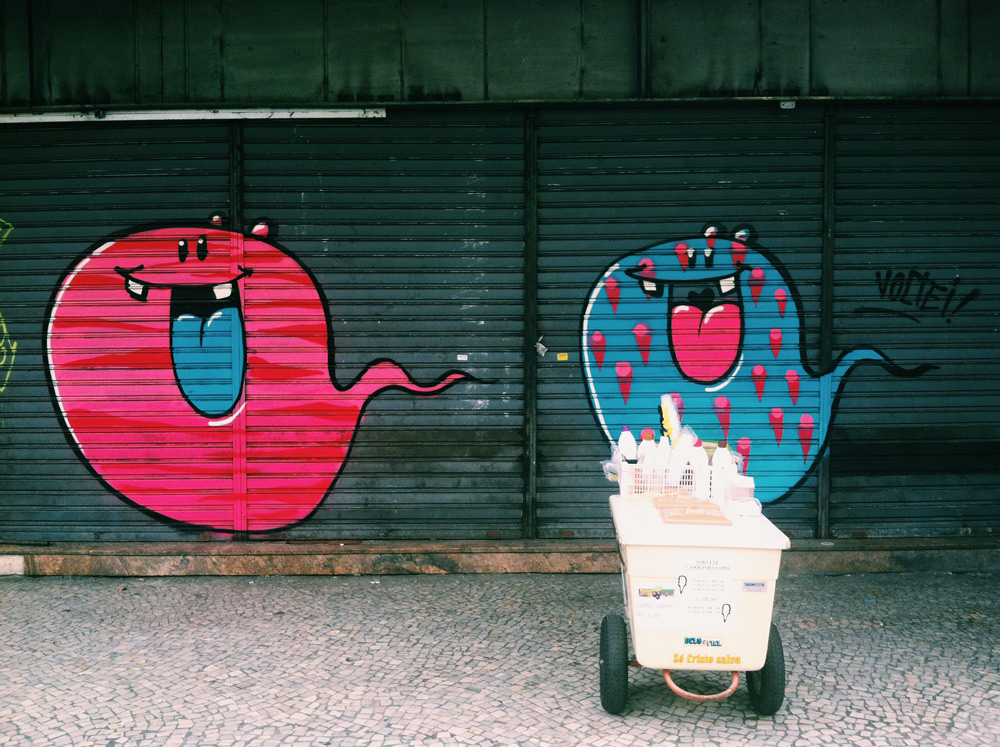 These people, these Cariocas welcome the art they know, that it tells a story and brings life to an otherwise boring urban landscape. They recognize that for many of the young impoverished artists here in the city, this is a positive creative outlet of youthful angst at the unfair world that we are born into. It don’t get no better than that. I want that for us here. I want all the kids in the ghetto I live in who draw and paint and are amazingly unfulfilled and unmotivated by the system—artists to be able to have a safe public space like this back home. One day it’ll all make sense.