"SHUT UP & WATCH" MOVIE NIGHT :: THE ONLY CULT MOVIE THAT'S ANY GOOD

Every Wednesday, Todd, Editorial Assistant and resident film geek at The Hundreds, lets us know exactly what to watch and eat for our miserable hump day night in with “Shut Up & Watch.” So shut up, because tonight, we’re gonna watch everyone’s favorite mid-’90s cult film CLERKS.

Unfortunately, it’s Wednesday again and you’ve made zero progress in bettering yourself in any way. In fact, you’ve taken steps backwards in life and you’re pretty sure it was on purpose. The random Mexican condiment A has finally started to crust on your living room table next to the weed crumbs that are old enough to look like tobacco. Now, to escape, you’re starting to drift back into the time when you peaked, the ’90s – where laziness and being disheveled were in fashion, but not quite as expensive. What’s your move? It’s time to justify your lack of contributions to the world by wasting a little more time and air watching Clerks. You’ve seen it, you loved it, but it’s been at least 5 years since you’ve feasted on the secret masterpiece of the ’90s (besides Swingers). But what’s this? You’re in a whole new state of mind upon second viewing? The thinning patches of hair on your head have taken your elegantly unkempt look from that of high school girls’ dream doodles to what mothers avoid in front of Kohl’s? For the first time, none of the characters from Clerks are your role models – and you’re actually frightened of your similarities? Beautiful, you’re in the correct frame of mind for Kevin Smith’s directorial debut – right on the brink of (another) existential crisis!

Plus, you’ve always taken pride in enjoying this low-budget cult classic, but haven’t really known if it’s good enough to bring up in a conversation and not sound like a dilapidated punk in front of your successful friends (enemies). Well, good news, Clerks is actually a cult movie that doubles as one of the best movies ever made. So to help you through these tough times, I’m going to explain why this one sticks out (spoiler: it’s because Kevin Smith is the greatest human being to walk this earth since Christ), what you should pay attention to, what you should eat, and how to watch it. Because let’s face it, if you can’t get your life together enough to stop working at the local gas station, you don’t know how to properly watch a movie. 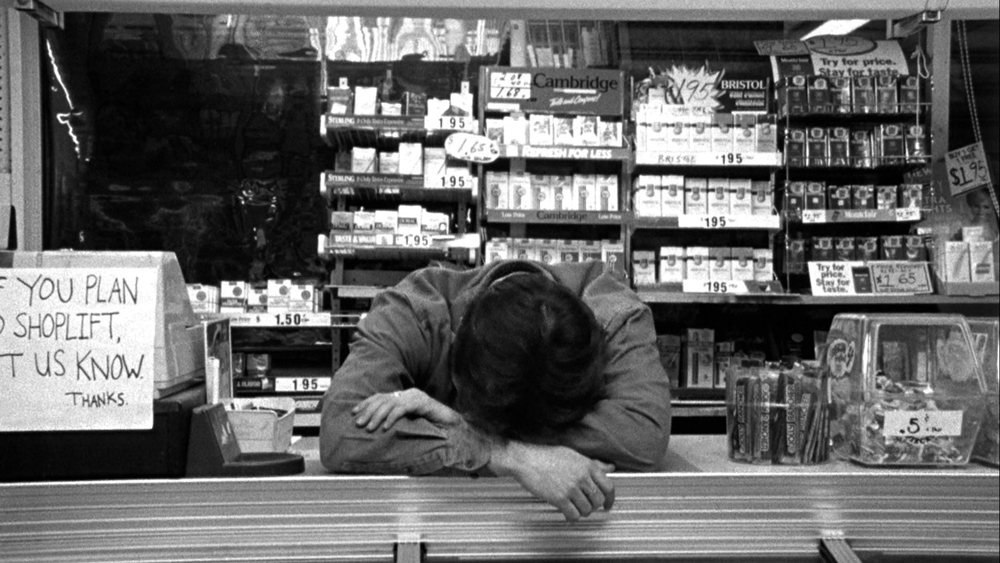 The Reason:
Clerks isn’t just a groundbreaking look into the over-the-counter monotony of a ’90s suburban existence or a great examination of a man being forced to actually see himself – it’s a guide book and love letter to filmmaking. It’s a movie about those (black) magical earlier twenties years, where your body is growing up while your head refuses to move. Where you find out your consistently funny life-of-the-party actually has thoughts and they’re beginning to tear him apart. Where you finally realize you’re just living in the memory of your older self who’s counting on you to create his home. If you’re unaware of director Kevin Smith and the fact that he sits on a throne of nerd glasses, then you’re going to miss all the geek-love he packs into all of his movies. And I’m not just talking about the pop culture conversations (which are insanely accurate) or the clip of Randal (almost eerily well-played by Jeff Anderson) falling to his knees surrounded by movies. I’m talking about the way Kevin Smith breaks every film method there is down to its simplest and purest form – which I’ll get into under the “What to Pay Attention To” part. The main reason to watch is that you can take all your flaws, unambitious behavior, and completely ignore or justify it. Just sit back, critique Dante’s (Brian O’Halloran) wasteful life, and pretend you didn’t dig yourself to rock bottom just like him. But sooner or later, if you actually listen to what the characters are talking about, you may find this to be the first comedy that sits you down in front of a mirror until you realize you’re wrong. Or you can just watch it, shut off your brain, and admire how much cooler everyone was in the ’90s. 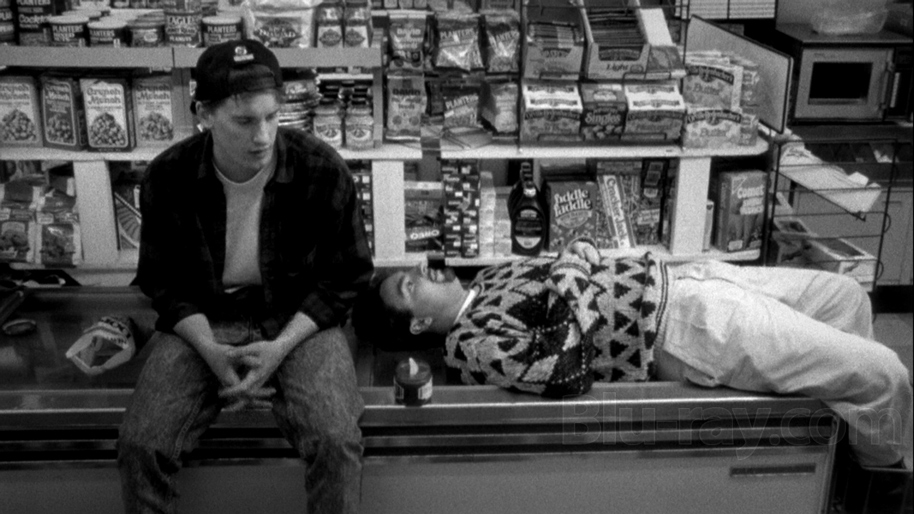 How to Watch:
You can watch Clerks in these places:

Of course, every movie should be viewed without distractions from the centermost point of the room. But I simply can’t keep telling you to do that, and this may be the only movie where other rules could apply. Whatever you’ve smoked today, you want to start this movie right as you begin to come down. The main goal when viewing this movie is to turn yourself into these characters. So sprawl out on the couch, trade your clean pants in for whatever boxers lie at that bottom of the black hole you call a hamper, and surround yourself with the fast food wrappers you swore to clean up yesterday. Then, reflect upon how alone you are and how everything bad that’s happened to you couldn’t be avoided, regardless of what actions you took. Quickly realize you didn’t take actions anyways. You’re trying to get to a place where your reality sucks just as much as your best memories – where I live. All of that may have been too specific. 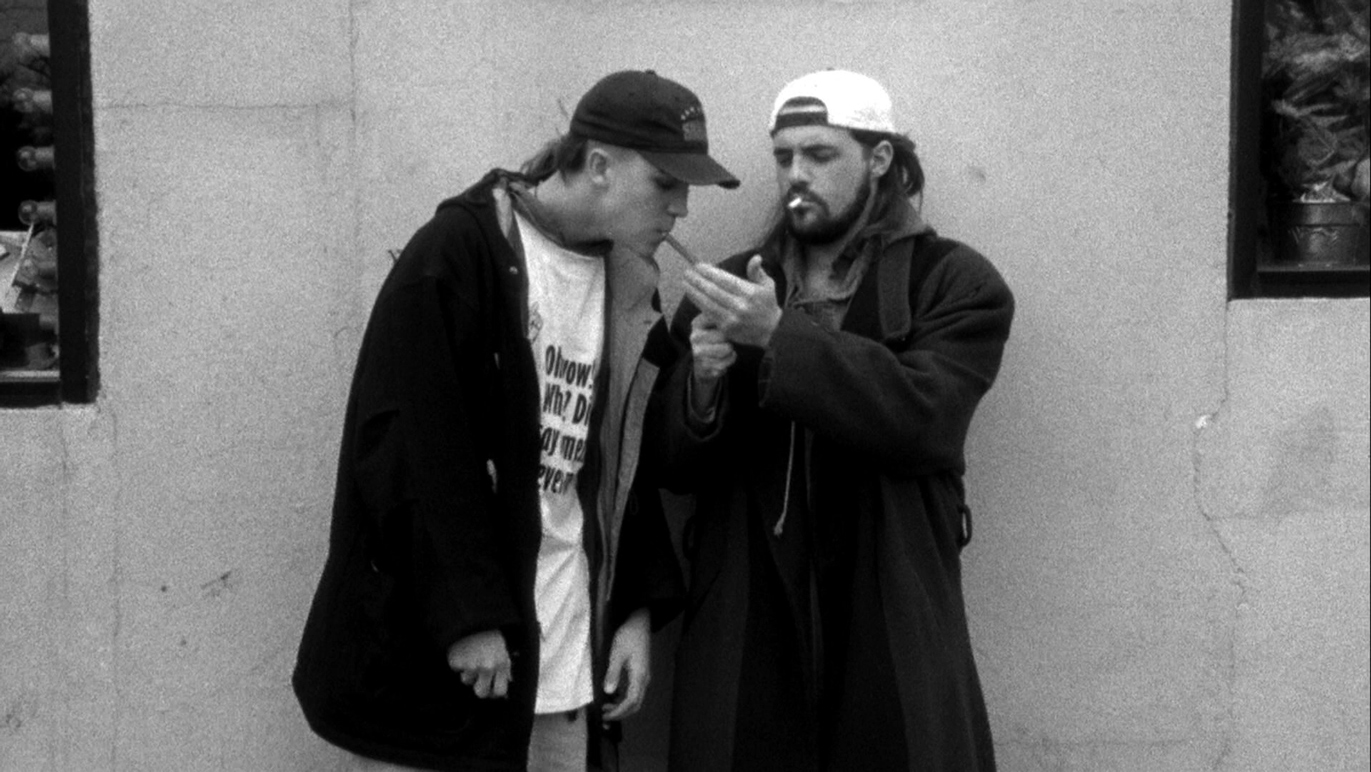 What to Eat:
I say this every time for two reasons – one, eating during a movie is painfully counterproductive and two, the man who knows 234892 times more about movies than I do and whose information I steal for this post, Jay Salahi, would cringe if I didn’t say it. Don’t eat during movies, you’ll miss everything for that bite. But you constantly make horrible life decisions, so why stop now? If you have to eat – because you’ll die or whatever – then get Burger King. Why? Because in Kevin Smith’s fictional universe, View Askewniverse, the recurring restaurant is Mooby’s. And in Clerks II, they shot Mooby’s at a Burger King. Now, everything from Burger King is just as disgusting as the next, so order at your will – but I suggest the BBQ Beefacon because you want to feel as clogged as pathetic as humanly possible. You’re ready. 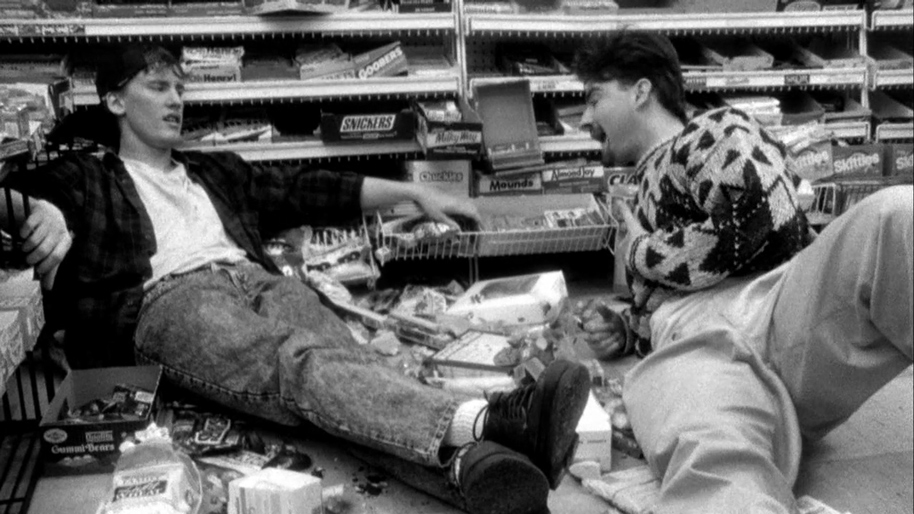 What to Pay Attention to:
You’re going to pay attention to the little things like how everyone that buys something buys a pack of cigarettes, the recurring cameos, “I’m not even supposed to be here today,” and the deliberately angry music. Why would you do that? Because those are the makings of a cult classic – a movie riddled with so many memorable little things to latch on to that it creates a universe. People recognize and find comfort in consistency and Kevin Smith packs enough in here to make his entire universe fully-realized and loved. You don’t remember the name of whoever owned the Quik-E-Mart where you bought candy in elementary school, but you remember his disgustingly long pinky nail so it remains a memory strong enough to never be forgotten. So – it lives on just like Clerks. Plus, you can tell all those little tropes and what have you were put there simply because it cracks Kevin Smith and the crew up. How? Because he uses humor to break tension and long-winded dialogue where he could’ve used anything to up the drama.

Even more importantly, like I said earlier, you can feel Kevin Smith’s film comprehension and love the whole way through. He managed to break down film techniques and simplify them beyond anything ever seen before. With Clerks, Kevin proved you can make a movie out of any story while showing how one day can define you – as long as it’s the right day. 22 years culminated to this point in Dante’s life, and this is the day the best represents who he is, and enough falls apart to change him by the end. Kevin Smith also flaunts his knowledge by shooting the film black and white and covering each scene with an epic, stationary oner. Which, in turn, forces the actors to play their parts theatrically while giving them room to let the conversation pour out instead of spat out. The use of non-actors gives the fast-paced dialogue this sense of rehearsal that strips just enough reality out of the conversations to prevent the film from dragging, and allows it to approach themes and topics in a unique way. No one talks quite like the characters in Clerks do, but every single person thinks and talks about the same things they do. Clerks isn’t like any other movie, movies are like Clerks. Add in some deliberately loud and angry music playing at all times to amplify the hidden angst boiling deep down inside of every character here, and you got yourself a classic. Oh, and Kevin Smith is Silent Bob – hence the best line at the end of the movie. 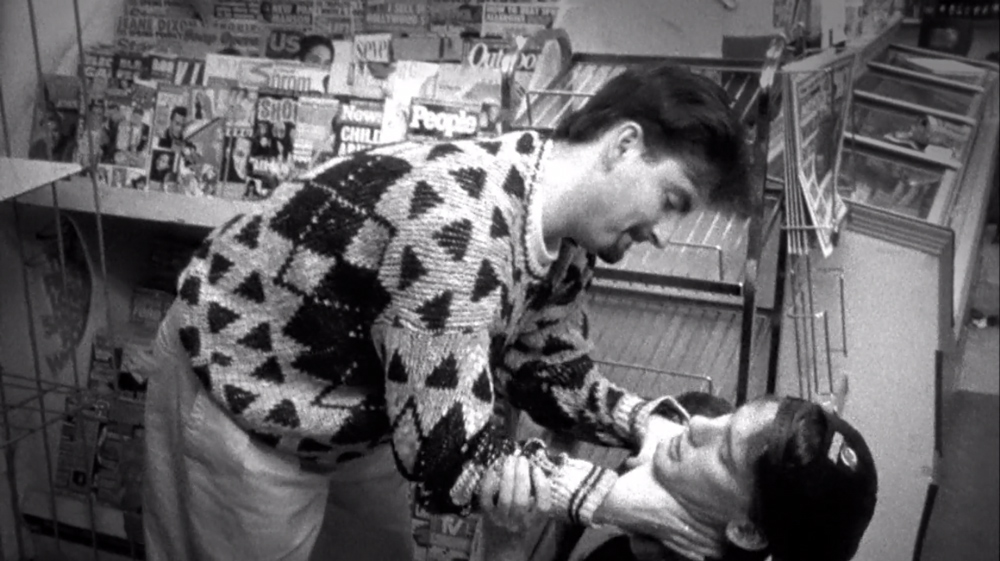 Also, note the use of chapter headings that foretell the emotional confrontations of the next scene. It’s rad and helps the use of one location never get tired, but it’s also a nod to The Divine Comedy. A bit of a leap you say? Perhaps, but I don’t think it’s a coincidence the main character’s name is Dante, the same name as the writer and protagonist of the epic poem. The Divine Comedy uses the same classic approach as other epic poems – but instead of using physical obstacles for the hero to overcome, it’s spiritual and mental. Clerks uses the same three act arc approach as other movies – but replaces physical obstacles with a mental, internal roadblocks. Same shit, different century. 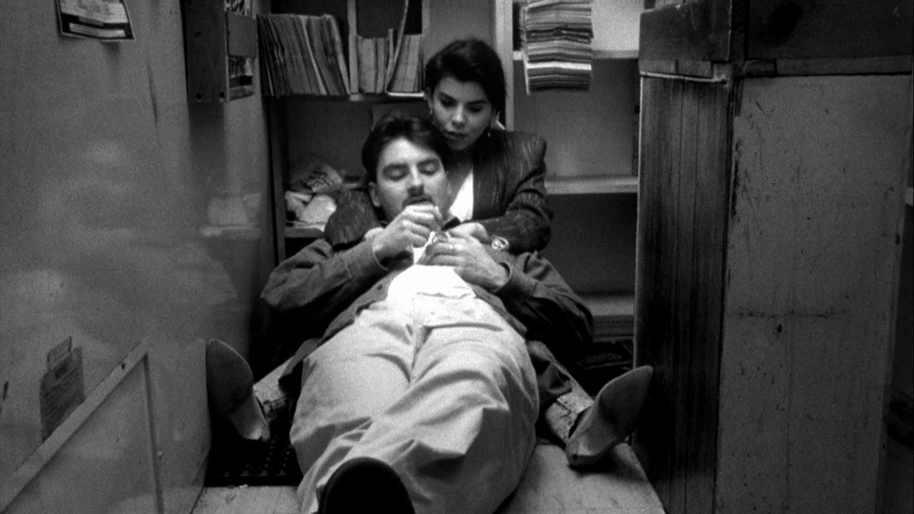 Discuss:
Again, the best part of all movies are the fact that anyone can like or hate them for any reason. And no one’s wrong. So if you want to talk about how Swingers is the same movie as Clerks but better, feel free to comment below. I’ll fight you on it (even though I like Swingers more) because I’m remarkably lonely and will take any human interaction at all. Even if it’s digital. Or maybe you just fill your free time posting narcissistic hate comments on random articles – I’m here for that as well.