For a while now, “they“ve been saying that graffiti is the next frontier for modern art. The street artists that the underground nurtured are now trendy fodder for stuffy art collectors in suits. But amidst all the hoopla and media coverage and mainstream appeal, real graffiti is still alive, kicking, stronger than ever.

Nowhere is that more evident than at the new Known Gallery on Fairfax, home of The Seventh Letter, a collective of artists who are rooted in graf, many of them the best in the world at what they do. Saturday night, the gallery opened FREEDOM, a powerhouse show that’s star-studded with the finest: Push, Alex Pardee, Futura, Pose, and Norm to name a few.

One thing’s for sure. While the critics and buyers look to graffiti as what’s next for art, I think this show is a compelling testament that there really is no distinction there. Graffiti IS art, and this exhibition proves it. 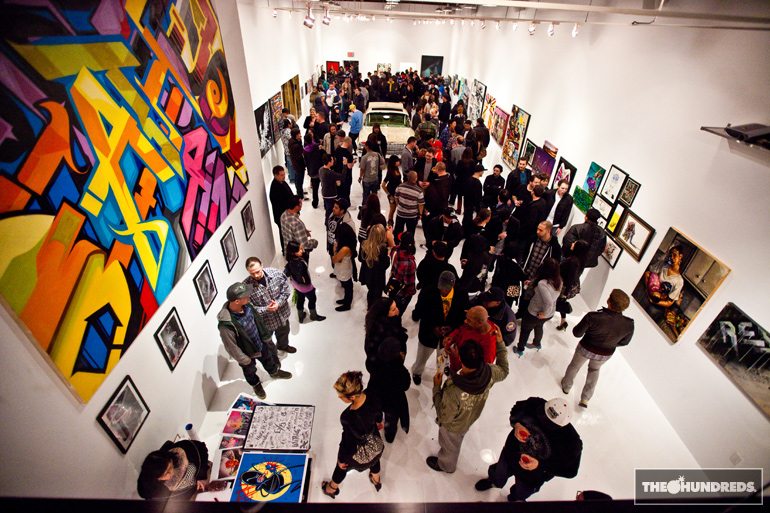 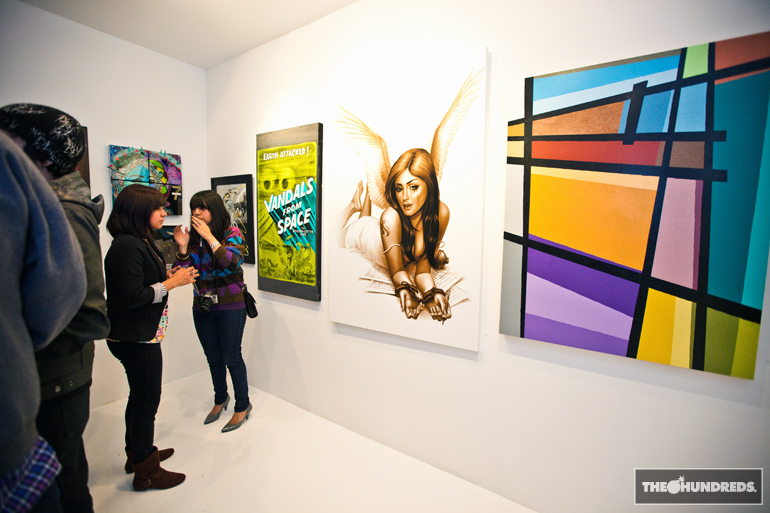 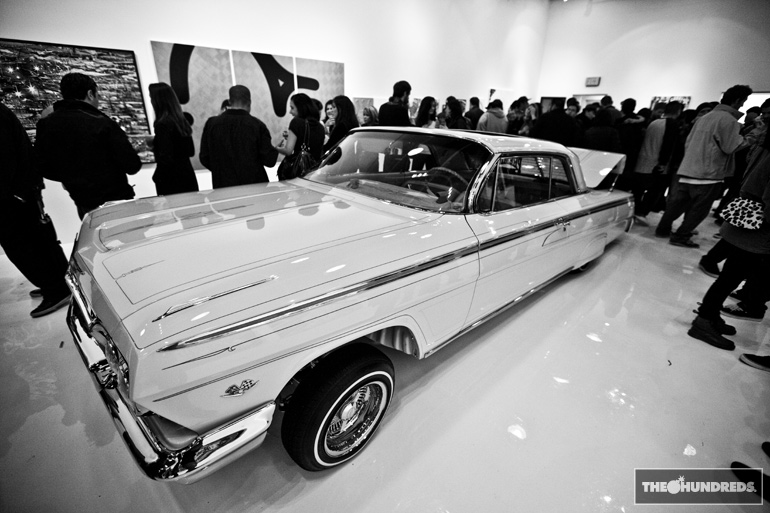 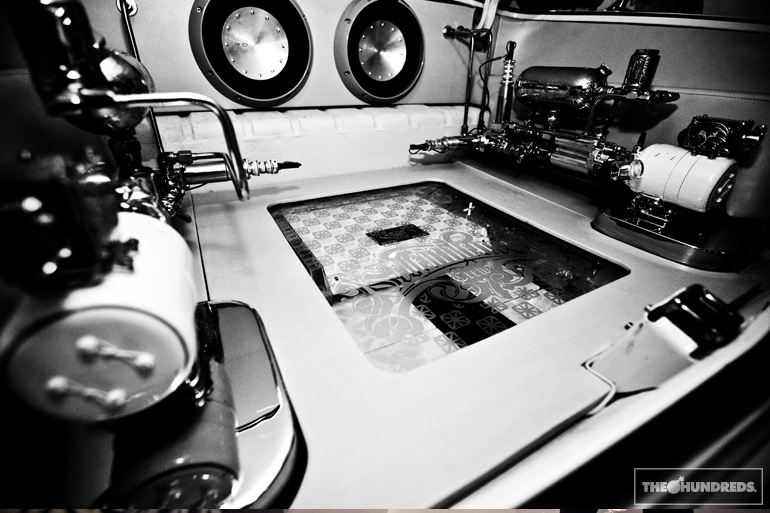 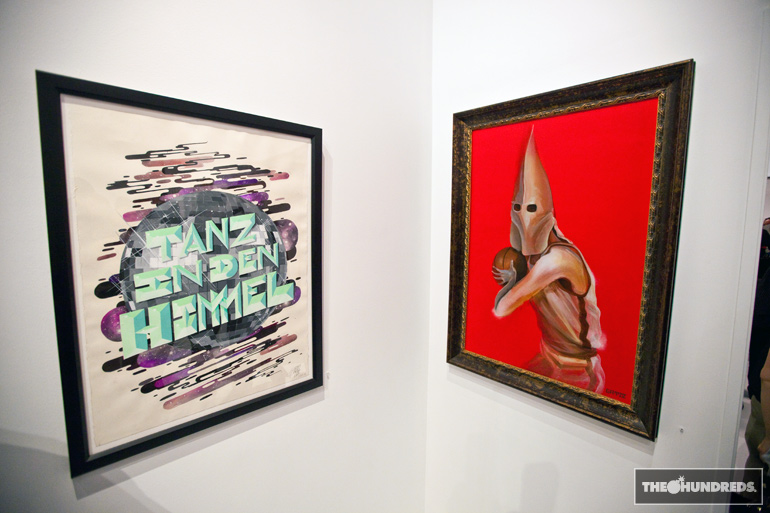 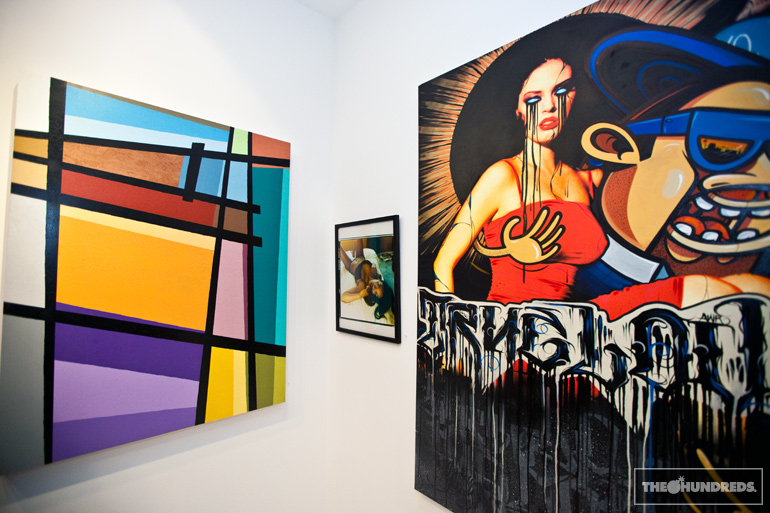 Jersey Joe aka RIME has really solidified a characteristic, caricaturistic style with his art. Benjie and a few of us at TH are big fans of where he’s taken his work, the colors, the lines of his cartoons, and of course, the letters. Casey aka Eklips is the captain of the ship, .. that’s his office up there, but you’d be hard-pressed to find him behind a desk. 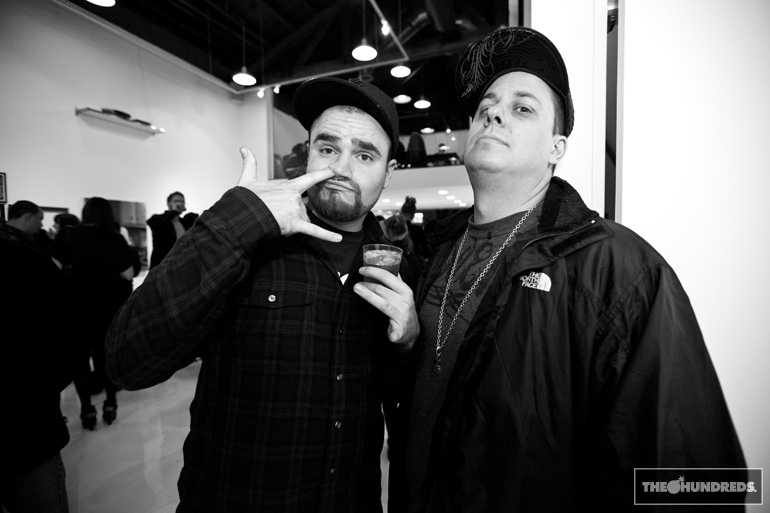 Those pieces in the center there belong to Saber, and I only know that because I’ve been in love with that series since I first saw it up at White Walls’ “Close Encounters”in San Francisco almost 3 years ago. I still want,.. Saber, if you’re reading this, can I get the blog-love hookup? 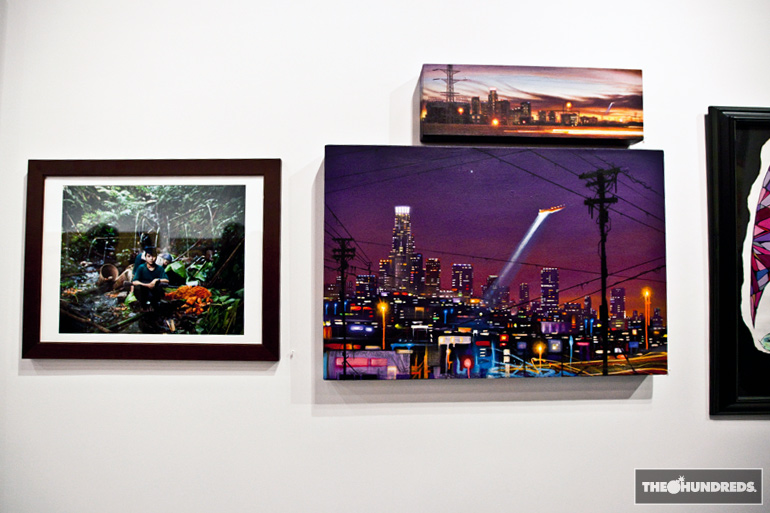 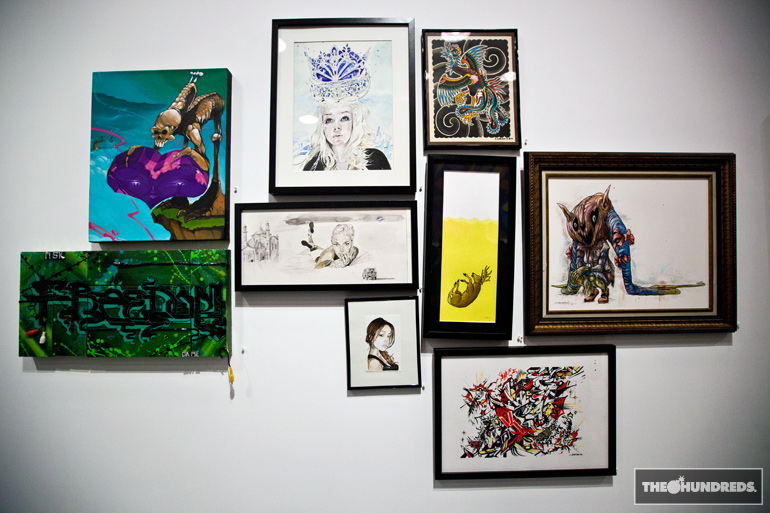 Greg Simkins aka Craola, still one of the greatest. Just look at that piece, the frame alone is quite a story. His certainly stands out from the pack. 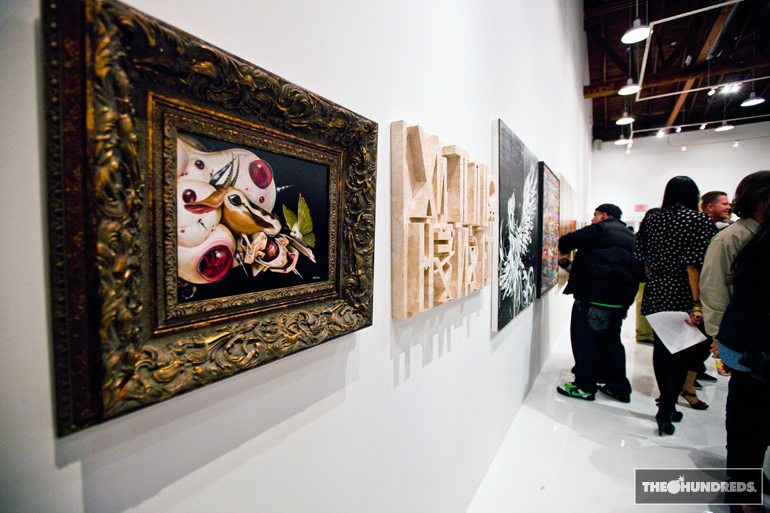 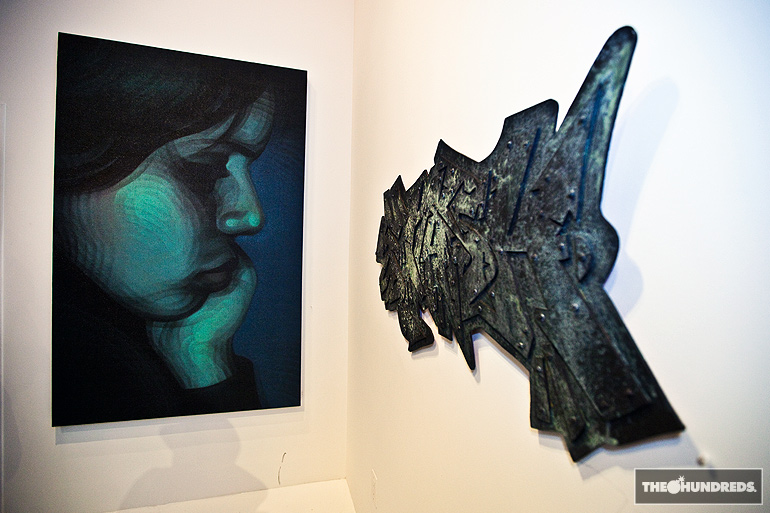 There’s RETNA, a master of handstyles and strokes, and all the things that make a legendary artist. This is one of those guys that centuries from now, art history students will be reading about in books, or iPads, or laserbeams, or whatever is going on at that time if we haven’t killed ourselves already. 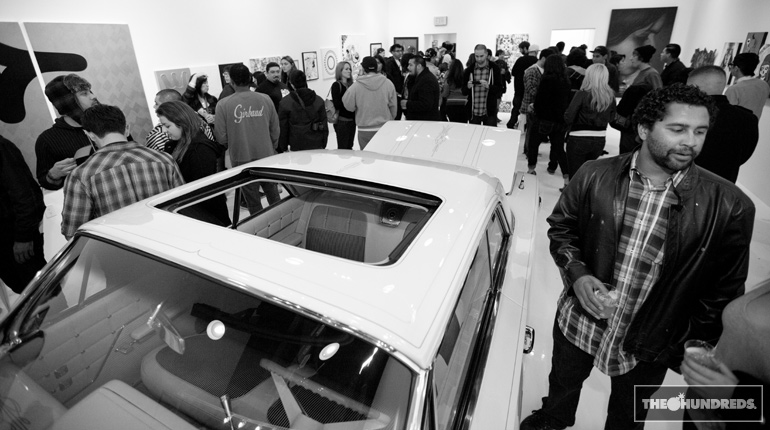 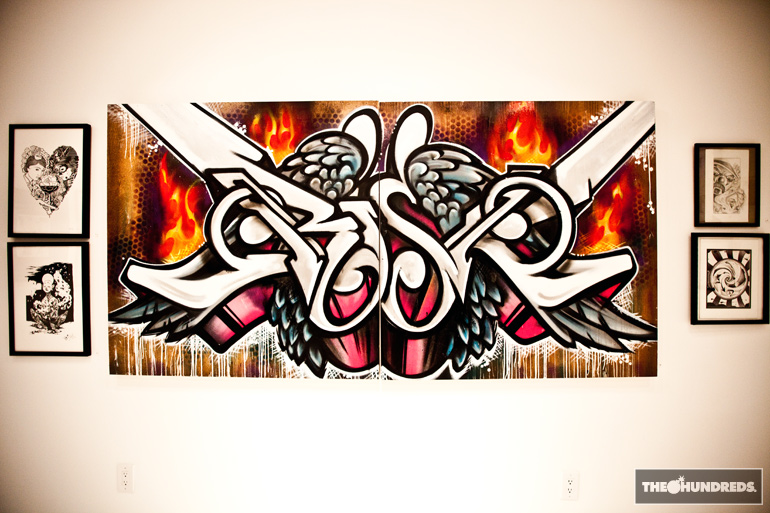 THAT’S RISK. My first time meeting him, I told him I was a fan of his art. He said he was a fan of my Twitter. I said, “Oh so you’re the one.” 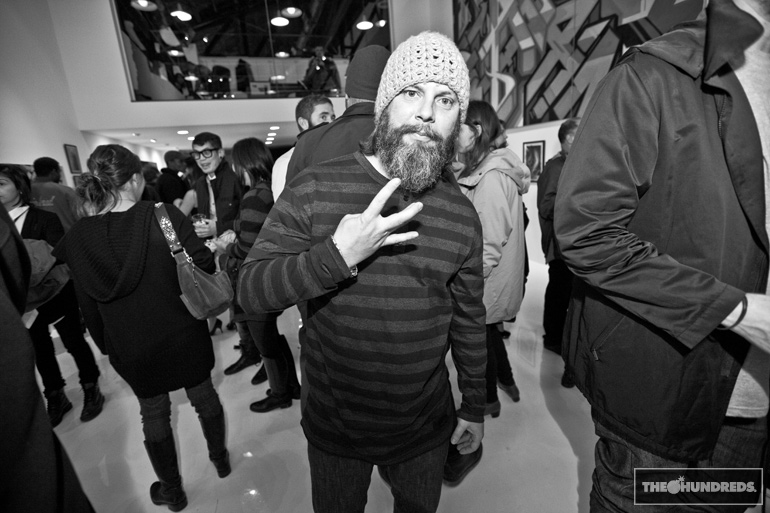 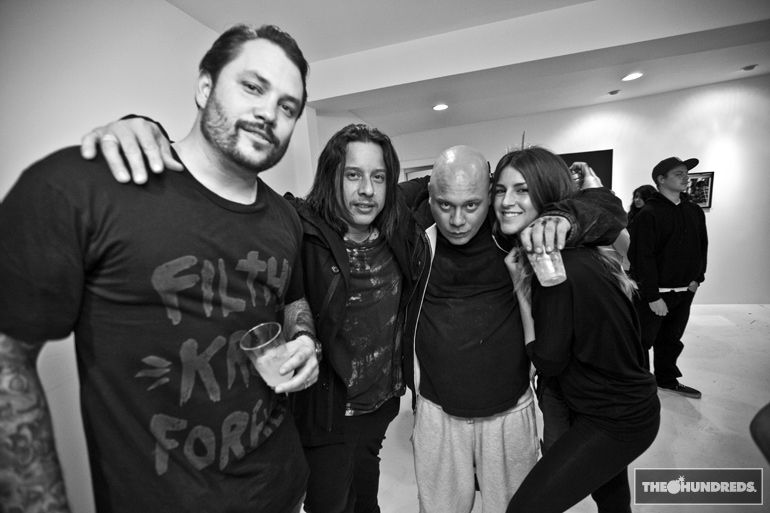 I could be wrong, but I think Phil had the highest-priced work at the show. This ensemble here will hurt you for a cool $40,000, and believe it or not, that’s a steal for how much his art’s been racking up these days. Phil’s a great guy, my first time meeting him as well, but always heard good things about the artist. 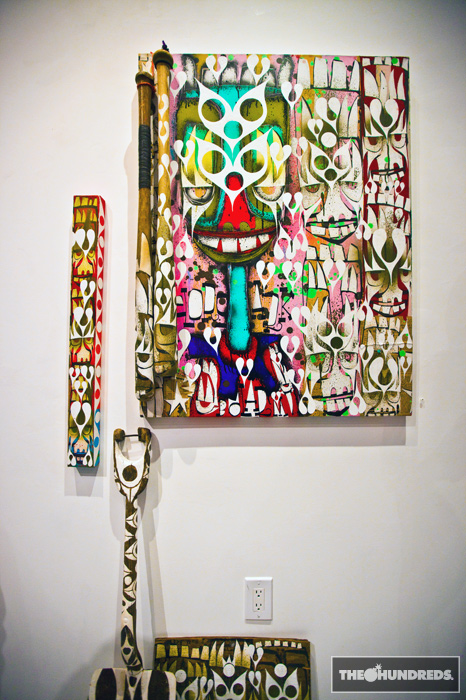 And speaking of great artists and good all-around dudes, ladies and gentlemen, Haze. If you don’t know, you should know. I do wish he was back in L.A. though, we could use his presence. 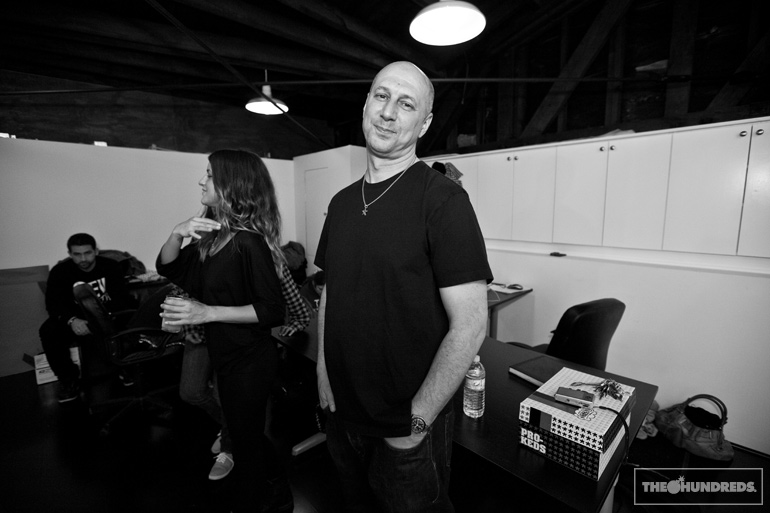 Anyways, it was a spectacular show, props to TSL and Known Gallery. One of my complaints about Fairfax when we first moved onto the street and the retail renaissance sprouted, was that there was no viable culture. With such a concentration of commerce and fashion merchandise, there really wasn’t anything substantive that was locking in the most important part: the lifestyle and culture. Think about it, streetwear can be fleeting, if all these kids are doing on Fairfax is coming to consume and not be educated or respond, or even appreciate or be entertained, then that can’t last very long, can it? I think Known Gallery fills that void succinctly. 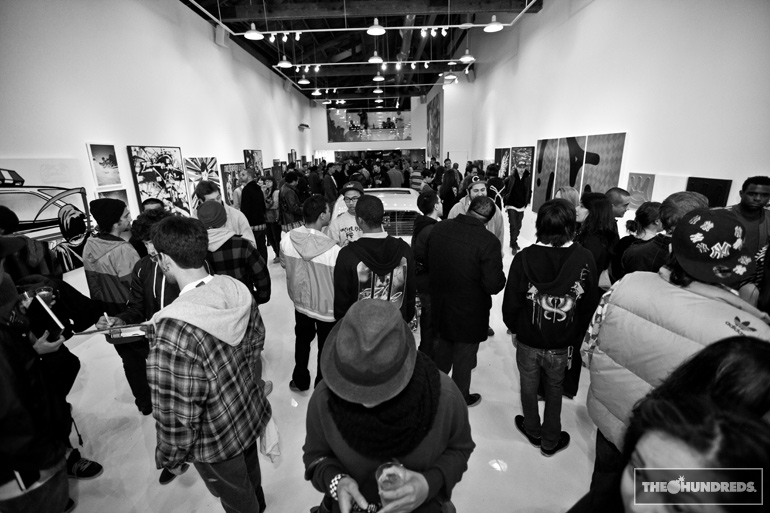