Rosson Crow is in quite a costume: her dress is made of canvas, sea foam green with all the details like buttons and wrinkles printed onto it—she mentions other canvas dresses, including the cerulean one seen in the photo below. This one is very Jackie O in a way that’s supposed to be very Jackie O. The sound of her new film, Madame Psychosis Holds A Séance, reverberates off the walls of Honor Fraser gallery in Culver. “You have to see the movie first,” she says, holding off our interview. And so I plop down on an antique couch in a darkened gallery and watch.

The 15-minute short is about an aging woman—played by ’80s screen siren Kelly Lynch—who is obsessed with the JFK assassination, which is funny because Crow herself is pretty obsessed with the national tragedy and its alternative narratives. Crow hails from nearby the scene of the crime—just outside of Dallas—and though she has the sort of marvelous manner of a grand Texan lady at a ball in the ’50s, she lets her tinfoil flag fly with a conspiracy theory or two.

Crow is known far and wide for her paintings—brightly-hued interiors of burlesque nightclubs, rococo hotels, and landscapes depicting ticker tape parades and scenes from the Dust Bowl. Lately, she’s been doing work about the JFK and MLK Jr. funerals, and it’s this exploration that’s led her to making Madame Psychosis. The sets in the film are all Crow paintings; the film is basically a living, breathing Rosson Crow installation.

As for the title of the film, since everyone’s read David Foster Wallace’s Infinite Jest, I don’t have to explain who Madame Psychosis—the sometimes-hideous-sometimes-beautiful radio host who spouts monologues about motherhood and death—is. And since everyone’s familiar with Plato’s dialogues about metempsychosis, I don’t have to explain that it’s the Greek concept of reincarnation.

After the film ends, Crow eagerly peeks her head through the blackout curtains making the gallery dark, ready to chat. 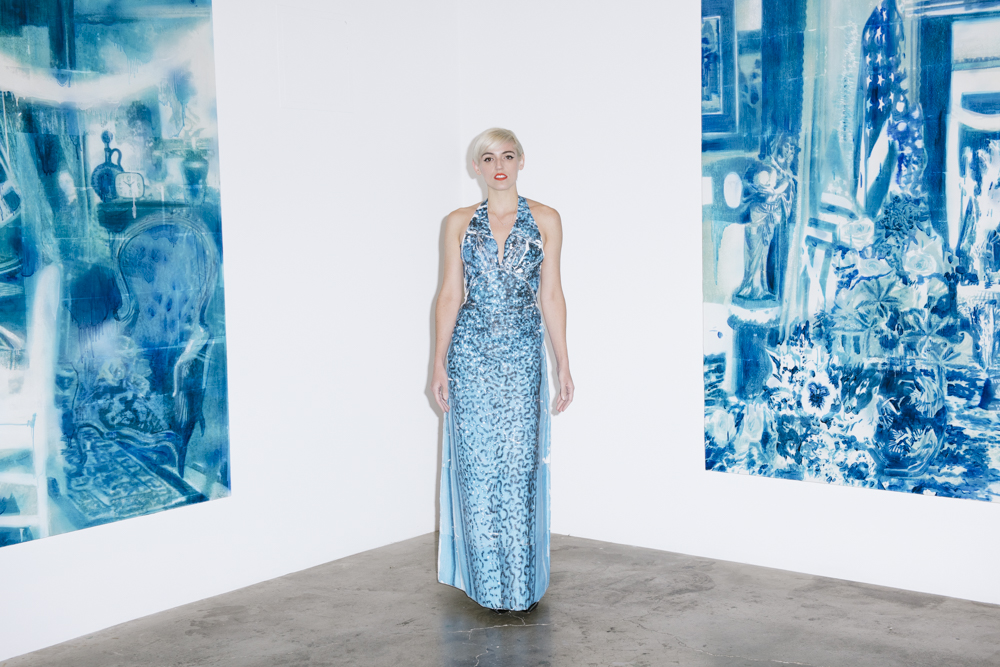 So this is really your first film?
It’s my first film, yeah. It’s really trippy.

I just interviewed Alex Prager for a different magazine and watched her films, and noticed you shared a lot of the same crew—including Jeff Vespa, the producer. How did that come about?
It’s funny. Through Alex. I knew Jeff before a little bit because he is one of the co-owners of The Hole in New York, so I knew him through [The Hole co-owner] Kathy Grayson. At the end of last year, Alex and I were hanging out, and I was like, “I’ve really wanted to do a short film for so long. I want to make sets with my paintings. But it seems so hard and expensive to get all these people to come together and work on it.” And she was like, “Oh, you should talk to my producer because he’s great. His name’s Jeff.” I was like, “Oh, I know him!” So I emailed him and he was totally on board.

Have you always wanted to do a film?
It’s been a seed in my head. I love film, and I feel like my paintings are sort of theatrical. I’ve always wanted to make sets for an opera. And I was thinking, “I could probably make one set out of three big paintings—that’s three walls.” And then thinking about what I would put in [the paintings], and what was the story I wanted to tell. My paintings are already, in my mind, kind of narrative. The narrative’s not always apparent, but there is a story there, to me. I feel like all these elements were cooking, but I guess the stars just aligned this year.

Like you said, a lot of your paintings are interiors. Have they always activated like sets when viewers walk in front of them?
They do. I always think of them as theatrical spaces that I want the viewer to feel like they can walk into and have this emotional experience. They’re immersive. 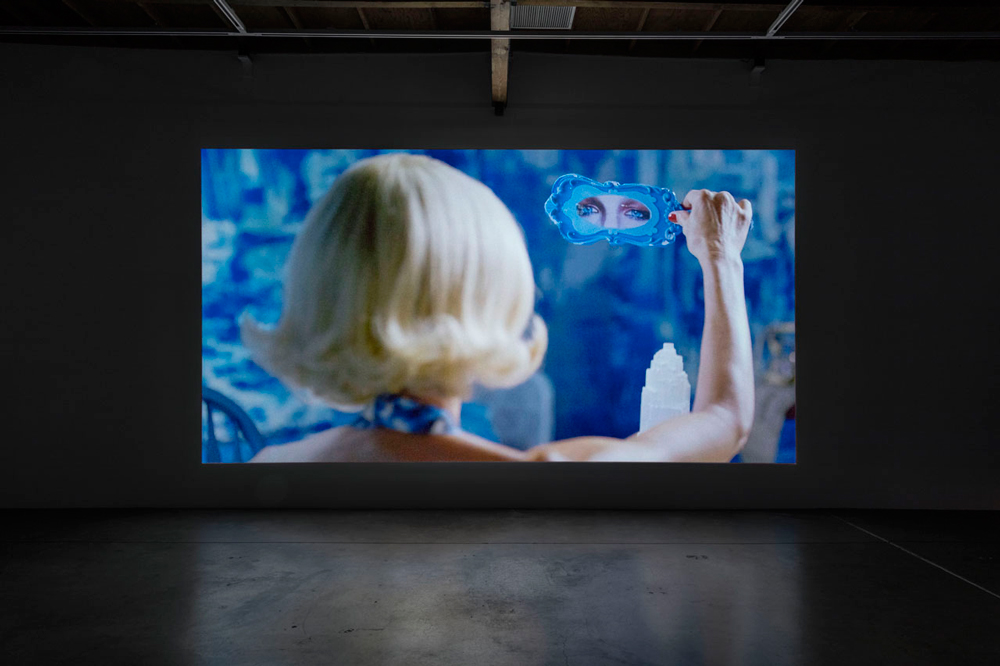 Kelly Lynch, who we all know well from Road House and Drugstore Cowboy—how did you cast her?
Through Jeff. I had actors that I was thinking about, but it was a pretty long list. I just wanted somebody who had a certain look. They had to be beautiful, but in a striking way, and the woman needs to be over 45 because the film is also about aging and being a woman. Jeff said, “What about Kelly Lynch?” So we met with her, and she’s kind of in the art world. She and her husband [screenwriter Mitch Glazer] are into art, and they live in one of the most amazing Lautner houses I’ve ever seen. And Mitch Glazer is also a JFK fanatic, so it’s kind of perfect.

So you’re nerding out, and it’s perfect. How literally is Kelly supposed to be Beverly Oliver [the woman who claimed to be the mysterious “Babushka Lady” present at JFK’s assassination, and seen in the Zapruder film]?
Beverly is the seed that this came from, but [the character] is not Beverly. I’ve taken that idea and made this other woman.

She’s a pastiche of people from that period, because I noticed Madame Psychosis says, “We will never laugh again. We will never be young again,” and that’s [a famous quote from White House correspondent] Mary McGrory.
Yes! Give this man a medal! You’re the only person that’s ever picked up on that. So it’s talking about us as a nation after a tragic event, but also this woman struggling with the fact that she wants to relive this past moment and this glamorous period of her youth, and she can’t get past that. She’s looping, on repeat, this moment of her past.

You’ve talked about this tragic national moment before, being in New York during 9/11. This film reflects that in a way. She says, “I was there,” or, “You weren’t there.” She has this dialogue with herself and this psychosis about it. Does this character, living through JFK’s assassination, reflect your personal experience?
I do think that 9/11 and the Kennedy assassination are on the same level. And also, there are tons of conspiracy theories, and layered histories of what really happened, who was there, who saw it, who experienced it. But also, things like this, when they’re so traumatic, you misremember things. Things you saw on TV, maybe you feel like you really saw in real life. 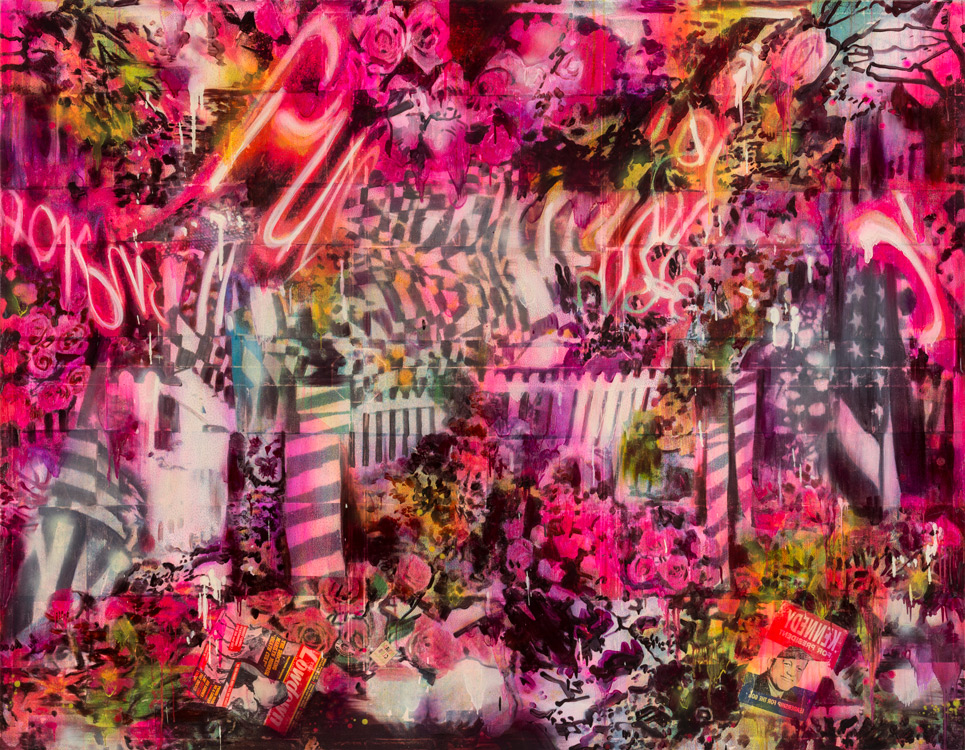 Like the comedian, Steve Rannazzisi, who made up [a story about] being close to 9/11.
Yes, I did hear about that. And this was actually something that the Warren Commission had problems with. They were going back and talking to people that were ‘there,’ but the witnesses were misremembering facts. It wasn’t that they were lying, it’s just that they really thought that that’s what happened.

Your memory wavers around those cataclysmic events. Tell me about the title of the film. “Madame Psychosis” is a pun of metempsychosis, or reincarnation?
First of all, the idea of reincarnation, and thinking about this woman who wants to take on the identity of somebody else—reincarnated into her youth, and also as someone who was present and at this assassination and knew John Kennedy and was there and it’s valid. She’s not wanting to be honest about who she really is. You know how there are those people who are totally willing to subsume who they actually are to be somebody that they want to be? There are a lot of them in L.A., and Madame Psychosis comes from Infinite Jest. I love that the name sounds like somebody who would be having a séance. And it’s not really about the David Foster Wallace character at all, but his character is interesting because she wears masks and is either the most beautiful woman in the world or the most hideous. 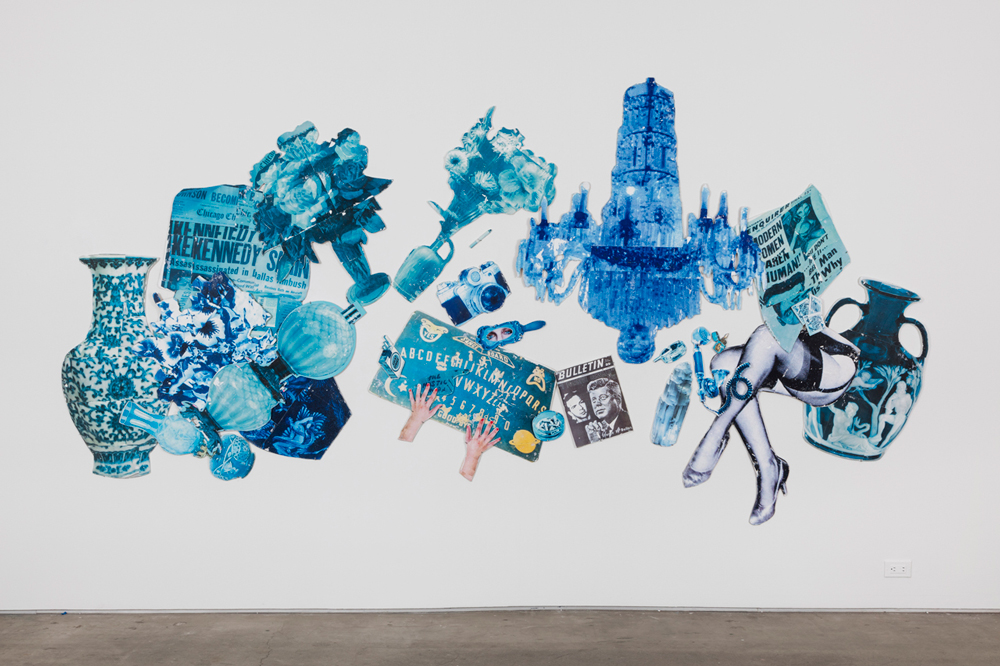 What is your favorite Kennedy conspiracy?
That Lyndon B. Johnson was behind it. I mean, that’s a great one. Or the mob. Or that it was an accident—that somebody in the Secret Service detail in the car behind accidentally fired his gun and killed him and they had to cover up the whole thing. If you’re into the Kennedy stuff, you should watch this documentary called Rush to Judgment (1967), which was made a couple years after the assassination. The narrator, Mark Lane, interviews a lot of people who were there, like Orville Nix, and it’s amazing, raw, and heartbreaking. We used some of the dialogue from that documentary in this film. And then, a lot of the people in this movie died mysterious deaths within a year in weird accidents.

You grew up in Plano, Texas. How does this research stack up to what you were told when you were a kid in Dallas?
I just remember going up and going to the JFK Museum a lot on school field trips and being interested in it. I don’t remember ever talking about it. I don’t remember thinking it was ever up for debate as to what happened. I never questioned it: “Oh, of course, Oswald killed him, and it’s not suspicious at all that some guy killed him the next day.” Those facts alone should raise a red flag. Why would Jack Ruby kill Lee Harvey Oswald if he wasn’t involved in something? It’s just so weird. Jack Ruby’s defense was that he didn’t want for Jackie to have to go to court and see Lee Harvey Oswald. That is such bullshit. That is not a reason to kill someone. I feel like every time I read a new book or watch a documentary, there are pieces that come to light where I’m like, “Oh shit. I had no idea this exists.” You can watch, on YouTube, literally 12-hour coverage of the presidential funeral from morning to night. It’s amazing. A lot of this archival footage in my film, that’s the funeral march from the funeral. 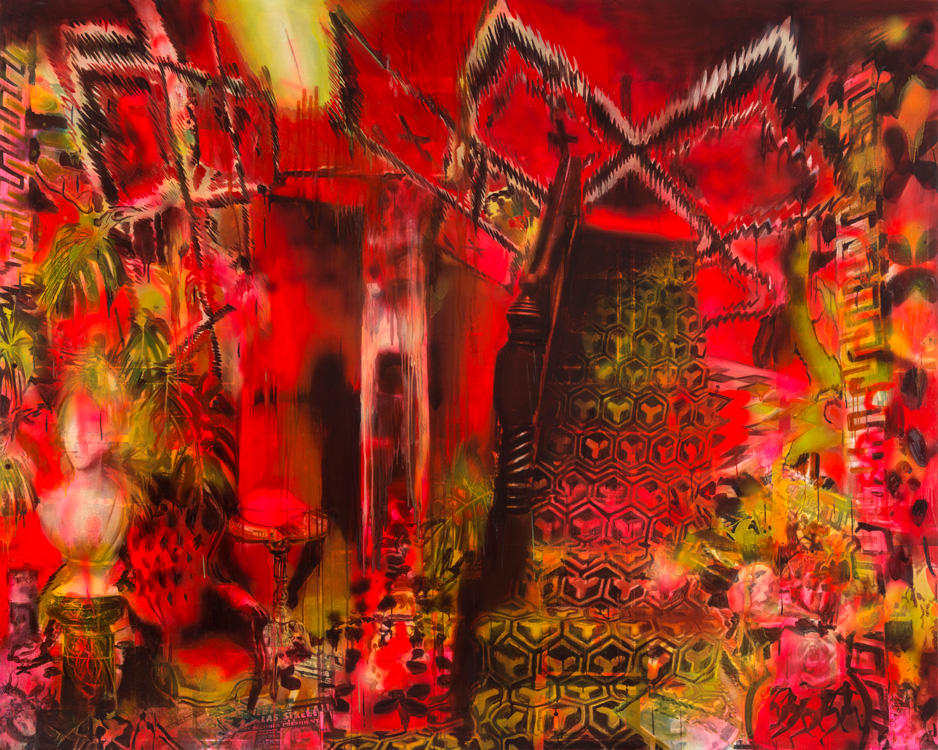 The Folly of Degenerate Imperialism, 2015.

You’ve used reds and neon glows before, but where along the line did this sort of Yves Klein cerulean become the thematic color for the film?
Originally, I was going to do a room that was red and one that was green. And originally, the séance was going to start in the red room. And around that time, I started working with a friend named Karolina Waclawiak [author of the recent novel The Invaders], who helped write the screenplay. She was like, “I don’t know if you should start the séance in the red room, because it’s so intense. Where are you going to go from there?” Then I was looking through these old photos, and I found these great old cyanotypes, and I thought, “Just make it cyan!”

Is it comfortable?
No. So Jeremy Scott designed the outfits and made them out canvas, and then I did photo transfer on them.

This one is very Jackie.
This is the Jackie suit reference. I love them because they are like paper dolls, and they fit the film with the flat buttons and the fakeness. And now I have something to wear to my openings. 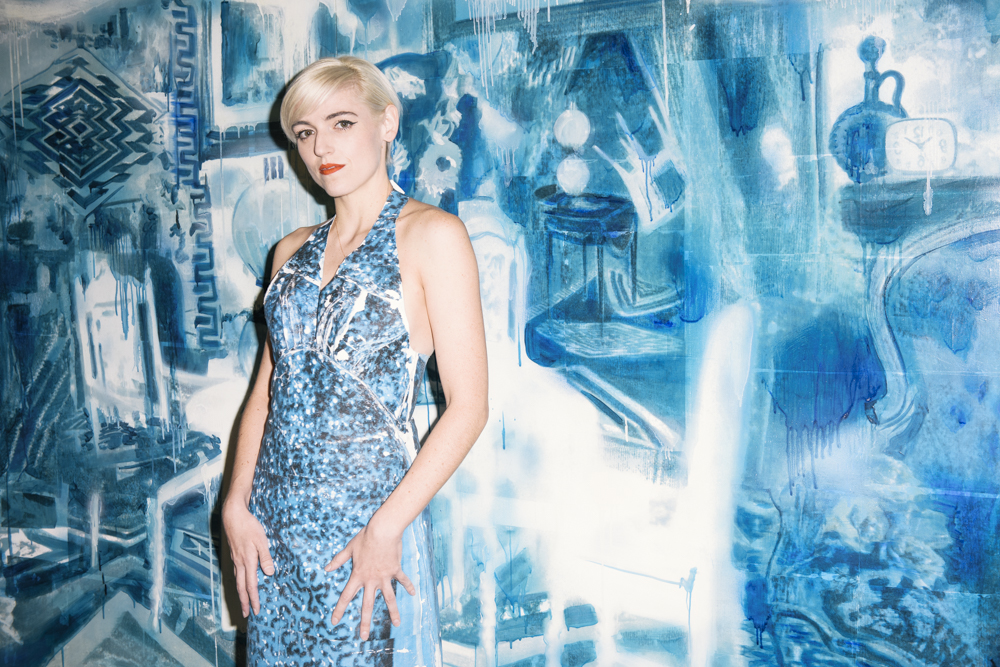