Yesterday, I mentioned how serious everyone seems to be taking themselves these days. It seems like the brand-runners and designers are so hell-bent on image, cred, and coolness, that they’ve lost all sense of humor and levity. Which also, unfortunately, may indicate that they have overlooked the very reason we’re all in this game to begin with: because it’s independent, creative, expressive, and fun.

It’s a real shame considering most of those very people were raised in the skate culture, a community that was founded on fun and juvenile antics. These days you’re either a coolguy (dressed in black, with a smirk to match) or a cornball (everyone else who’s not as cool as you). In fact, from the designers to the consumers, they’ve all become so corny-conscious that ingenuity and original thought are becoming scarce. When everyone is so afraid of being innovative lest they be called out for it, then it makes for a stifled, uninspired bunch of clones who are all playing follow the follower. It doesn’t matter if you’re a black sheep, when the rest of the flock are black also.

As a company, we take cues from skateboard culture. Skateboarding has always focused on fun, and in turn, has acted as a breeding grounds for prolific creativity. While perusing Ray‘s blog, I just found out that they’re about to release a biopic on Steve Rocco? Talk about having fun, this man was a revolutionary (albeit in odd disguise), a true unfettered creator. 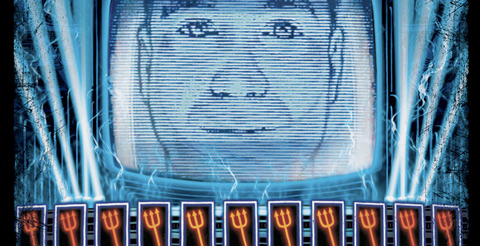 And have you seen this Denver kid William Spencer’s part in the “Hollarado” video? Again.. Fun = Creativity = Innovation. (If anything, watch his grand finale trick).

Moral: Have fun. It ain’t that serious.