TIME VS. HYPE :: THE STORY OF A LOBSTER ROLL FEUD IN MAINE

“Have you eaten here or across the street before?” The 50-something woman behind me in line at Red’s Eats in Wiscasset, Maine, politely asked.

“I’ve eaten both a few times,” I turned and replied.

“Which did you prefer? I’m from Alabama and it’s my first time, ” she said.

“Both lobster rolls are amazing,” I explained. “I can’t pick a favorite, but I prefer across the street because there’s no wait and...”

“YOU’RE WRONG!” Shouted an emphysema-stricken voice from the woman behind us.

Now, other than the verbally and physically abusive nuns from my Catholic grade school years (all of whom must be dead by now... insert smirk here), I can’t recall the last time I was scolded by a 70-year old woman.

“Foodies” love hype. And the lobster roll at Red’s is as hyped as any sandwich could be. “Foodies” also love to create restaurant “feuds.”

Directly across the street from Red’s is Sprague’s Lobster, an eatery that’s received verbal lashings from Red’s advocates for years. My guess is that Sprague’s did nothing to spur said “feud,” other than simply opening its doors across the road, approximately four decades after Red’s did.

But back to tracheotomy woman…

“Red’s is better!” She belted. Addressing Miss Alabama and not even looking at me, with zero concern that she eavesdropped and interrupted our conversation. “They give you more lobster and it’s fresher!”

Sprague’s on the left, Red’s on the right.

Engaging in some one-upper, Trekkie-like banter over lobster with a senior citizen whose palate has been obliterated by Camel Wides is NOT why I fucking flew to Maine.

I leaned in and quietly replied to the Alabama woman, “That’s one opinion,” before aborting the discussion and facing forward.

The two commenced yentering behind me.

Within seconds, the 30-something, chocolate-lab-toting, New York City couple in front of me (I know this because they told everyone within earshot they were from New York and had never eaten at Red’s), decide to inform, via unsolicited announcement, that “they use more than two whole lobsters on each roll here.”

This is the stupidest thing I’ve ever fucking heard:

1.  Because do you know what that would cost per roll? A lot.
2. Because you can look at the size of every lobster roll coming out of the window, basically on one folded slice of bread, and see that it couldn’t possibly contain “more than two whole lobsters.”
3. Because neither of you have ever eaten here.
4. Because the sign on the wall: 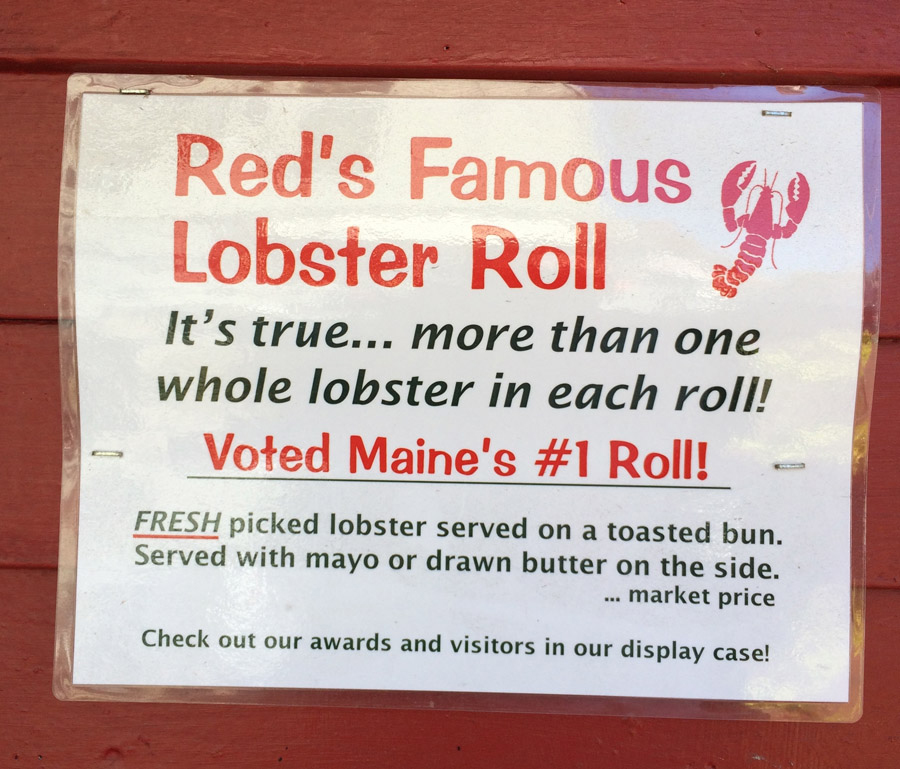 I’m dipshit sandwiched here... with at least a half hour to go before I’m sitting at a table in peace and quiet.

Rather than be that guy (which I will soon attempt to speak against in this article) and correct these poor, mal-informed New York souls, I opted for “nonviolent resistance.” As the couple watched me pull out my phone, I stepped out of the line and took a photo of the sign on the wall that clearly states: “More than ONE whole lobster in each roll.”

Yeah, they piped down after that one.

I resumed my position in the queue, and eventually ordered and enjoyed my roll. In case you were wondering, I always opt for cold lobster with drawn butter.

Now, I’m no Anthony Bourdain, but after many tastings, Red’s and Sprague’s lobster rolls are very, very comparable – both stating that they use “more than one whole lobster” per roll. I noticed that the smaller, more smashed-up bun at Red’s might create the illusion of “more” lobster for some lesser-observant patrons.

Furthermore, Sprague’s is priced slightly lower, with no 30-60 minute wait, and plenty of waterfront tables.

If you value time and a pleasant view more than being part of the hype machine, then Sprague’s is a no-brainer. You’ll also avoid verbal assaults and uneducated chatter from complete strangers.

I’m not sure when it happened, but a time once reserved for relaxation and meaningful conversation and connection with loved ones is now often littered with passive aggressive one-upping and second-hand internet disinformation from armchair food critics. Is it necessary to butt into people’s conversations and relentlessly feed one another Snapple cap facts about the establishments we are dining at or the food in front of us?

Do we all need to be craft beer experts, mixologists, sommeliers and cheese mongers? “Posers” might not be the right word, but it’s the first one that comes to mind.

What are we trying to prove, to them and to ourselves anyway?

The fact that you’ve been to more restaurants than the person next to you or drank more Pliny the Elder doesn’t make you a smarter, more cosmopolitan or a better human being.

Let’s stop fooling ourselves into thinking that “hype” and the First World “struggle” of enduring a 45-minute wait or checking Twitter and chasing a food truck around town makes the food taste any better.

Instead, let’s make dining more enjoyable for everyone… Eat, drink and be merry – not mouthy.

BEST THINGS I ATE IN LOS ANGELES IN 2014