UNDER THE PIN :: GETTING TO KNOW ACCESSORIES BRAND #PINTRILL#

I really didn’t know what to expect meeting Jordan Roschwalb of Pintrill. Honestly, I hadn’t heard of them till I researched them and rightly so, the site has only been up since April/May and their growth has been exponentially steady since then. The one thing I did gather from my conversation with Jordan is his drive and focus. How does one separate one’s self from the masses? I learned that something as unassuming as a pin can do that. In a society where everything is accessible, the smallest accessory can make something your own. Jordan’s banking on pins, and from the look of things, he’ll be sticking around for awhile. 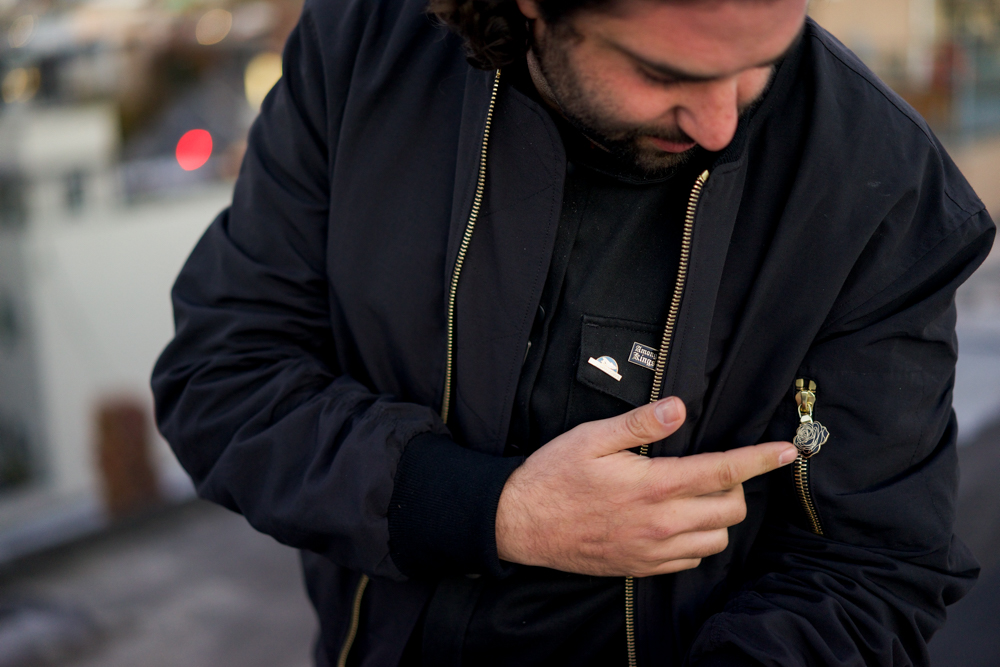 PETE PABON: Can you introduce yourself?
JORDAN ROSCHWALB: So my name is Jordan Roschwalb, I’m from Brooklyn, New York, and I am one of the co-founders and presidents of Pintrill.

What were you doing before Pintrill?
Before Pintrill, I was working in the automotive industry. I was actually working for Mercedes Benz as an operations manager.

What was the story? How’d you come up with the idea for Pintrill?
So the idea for Pintrill came about when I was in LA last January. I was talking to a friend of mine and we were just discussing different items that are one-size fits all and I was really trying to think of something that I could develop so that it could be worn by the masses and not just by one person in particular. But it could also be created in a limited availability setting.

Pins gave me that outlet. They’re all one size fits all and they can be created limitedly or mass-produced; either way.

That makes sense, I wouldn’t even have thought of it that way.
I was reading an article about 40oz Van. He chose to do hats because they were one size fits all. He didn’t have to pick size or anything so I was like, “Whatever I do has to be like that.”

It lowers your manufacturing costs.
Everything. Shipping even, it makes shipping everything so much easier. You don’t have to worry about doing different sizes, just take the pin and put it right into the envelope. It’s awesome.

Now you can just print your labels and have USPS pick them up.
Exactly.

We have a couple different releases coming out, the city can be really inspiring. You can walk around the city and I come up with five or six pin ideas in an evening. Stuff like that. My team and I, we can sit down in here and we can start rambling off what’s in current events right now. “What is current in current events? What is super, super current? What’s not going to change in the next two weeks or three weeks?” Pin ideas can from that.

Then, of course, you look at your iPhone, we bang out Emoji ideas like that. Just the day-to-day of it is what’s really inspiring to me. There are so many things that pins can be that are overlooked every single day, so that’s what I’m trying to do. I’m trying to create a movement within pins because everybody will wear a pin, it just depends what that pin is going to be.

Do you target a certain demographic when you do something like – as an idea, the insert that holds a 45 into a record player or something like that, “Oh, this one’s going to be for DJs,” or something like that. Or a cassette like, “Oh, cats that are going to remember that are going to be in their 30s.”
There’s always a certain demographic to each pin, but we try to look at it as broadly as possible. Because we don’t want it to be pigeonholed into one thing and only one type of person can wear it because it’s not like that. It’s an item to elevate your style. It’s not just for one person to elevate their style, it’s for any person to elevate their style in any way that they see fit. You know, whether it’s for a doctor to put on their scrubs or for a model to put on a denim jacket – it doesn’t matter.

Something that translates universally.
Exactly.

But every now and then, I guess, you can take something that’s kind of iconic to a movement or a group of people.
Exactly, we did a headphone pin that was for this company, Grado, and that was very “cult.” Everyone that used Grado headphones had to have this pin. So it was kind of crazy.

You can do that with pins, you can do camera ones or something crazy.
Anything.

And you know that you’re going to have a following.
You need to align to somebody that’s in that sect just because that’s going to push it harder. You want to align with somebody that wants to wear that pin. That you essentially, like you said, design that pin for the leader of that demographic. That’s how you want to be on board with that. 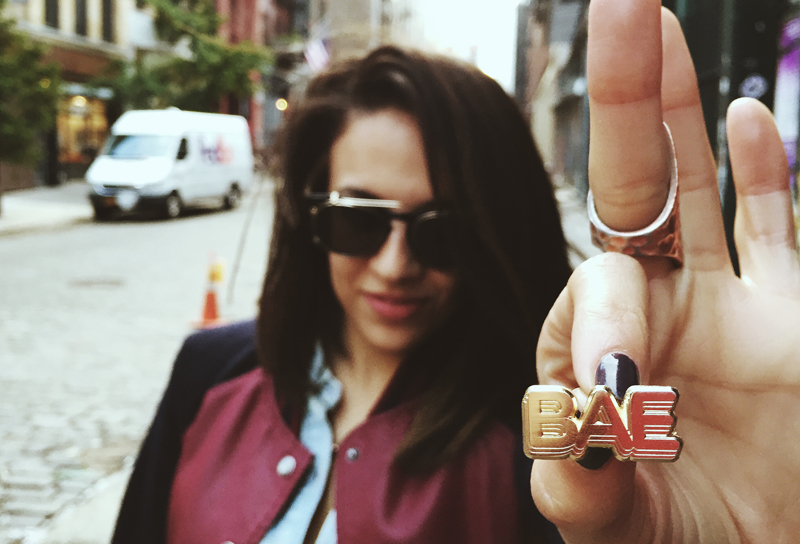 What’s one design that you really wanted to design but know it’ll definitely never happen? Do you have a design where you’re like, “I want to do it, but I know if I do it, it probably won’t translate well.”
It’s really funny you say that. One of the first designs – no. I can tell you something off the record if you want to know something really funny.

You know what, save one for off the record and then one that you don’t care if [we print it] –
Let me think. We worked on – it might get released and it might not get released, I don’t know what’s going to happen. But you know the drop pin? The drop pin, like, “Drop me a pin.” It’s cool in theory, but in reality would somebody wear that?

I mean, yeah, that’s a hard one. It’s catering to a generation where that’s the only way they know how to communicate and share information.
A 30-year-old might not wear it. It’s crazy to say that. For you and me, it’s not something that we readily say, really, but if you’re 21 right now, you’re like, “Send me a drop pin.” That’s the norm. So maybe in 5 years, it’ll do really well.

I’m trying to create a movement within pins because everybody will wear a pin, it just depends what that pin is going to be… It’s not just for one person to elevate their style, it’s for any person to elevate their style in any way that they see fit. You know, whether [the pin is] for a doctor to put on their scrubs or for a model to put on a denim jacket – it doesn’t matter.

It’s kind of like [we wear a] uniform. We all shop in certain places and we mix things up to look different, but how do you differentiate that uniform from everyone else?
Yeah, that’s what pins do actually.

[Us New Yorkers are] too fast and we like to walk places.
It’s crazy, you walk over there and people look at you like you’re nuts sometimes, I feel like.

Since you guys are new, what would it take for you to consider this company complete and successful?
I wish Doni and Andy were here because they measure success much differently than I do. But I would say it’s a success already. The fact that we were able to sell one pin is a success, so it’s just like, what is the next step? We’ve already reached our goals for just starting up and saying, “Can we do this?” Yeah, we know we can do it, so now it’s just create the pin movement. There needs to be a movement around it, everybody should be wearing pins. All different types, it doesn’t matter who you are, you can wear a pin. It’s just another way to elevate your style and turn up your outfit and change it up.

Make a statement that you’re someone or something or you have an interest in something.
I think we’re a success, but not to not answer your question – what do I think needs to happen for us to grow a little further? I’m not really sure, because I think the things that we want are to be widely spread in retailers. And not to say hundreds of retailers, but 20 to 30 specific retailers and have a line of jeweled pins in Barneys. Take that to the next level and really be able to make our own pins.

Ahead, I see us creating pin apparel, I see us making apparel that’s pin-based, that’s just for pins. So you don’t have to put a hole into your jacket because there’s already a holder in it for your pin. Something along those lines and all those things make it sustainable and make it something that I can do. 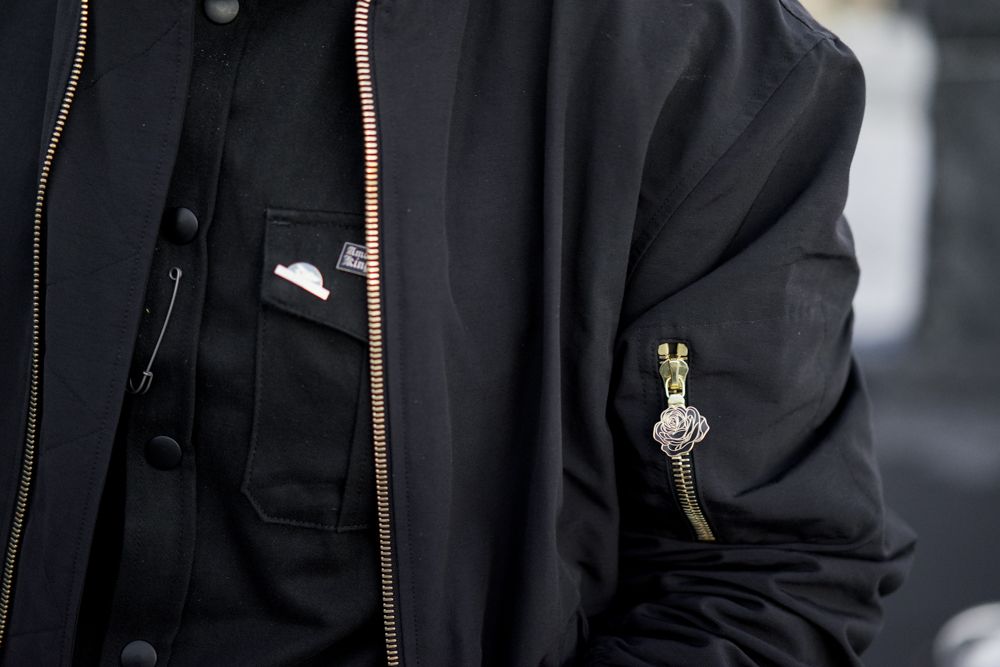 How was the response to your product different than you anticipated? Or is it exactly what you expected?
Honestly, I had no idea what to expect. I had no idea what was going to happen because I really just wanted to make these pins because I really like pins. So I was like, “Okay, if I can make these and sell X amount of pins then I can make another batch and I can have new pins for myself.” So that’s the thing, but then it just accelerated from there.

Did you figure out how you were going to sell it? Are you strictly e-commerce?
Yeah, everything is strictly e-commerce right now, we have retailers, a few, but nothing – we haven’t really pushed that hard yet. Just get the word out there and get ourselves in different regions right when we were starting off.

People were attracted to the brand right away, people were inquiring about it immediately to see if we would put it in their store and stuff like that. So the first five or six stores we did, now we’ve become way more selective with the stores that we’re going in.

The only other reason we’re in stores right now is we released the All Praises Due collaboration with [Frank] Cooke. We linked up on both ends and got into five or six different stores for the release. So that put those pins into stores so that people could get it more accessibly – they didn’t have to just go online, they could get it the day of. Instant gratification kind of thing.

How do you determine what collaborations you’re going to do?
Like I said, I love making pins, so it’s really hard for me because as a young brand you can’t make the wrong choices. You can’t choose to collaborate with everybody because first of all, it just spreads you too thin. We’re three people, so we can only be three people, the other thing is if I really like the pin idea then I’m going to do the collaboration. It doesn’t matter how big or small your following is, if I really like the idea I want to make the collaboration.

That’s not to say I won’t make you pins, if you want me to make you pins, I’ll do that too. It’s just something that you can release on your own, that’s totally cool.

Out of the ones you’ve done, which one is your personal favorite?
I’ve actually done an Empire State Building pin, it’s completely unreleased and hasn’t been seen yet. But that’s my absolute favorite pin, because to me that’s a pinnacle of the city and that’s what I strive for every day. Every day I wake up and I get to look at it and it reminds me that anything is possible. So to be able to wear that on a daily basis, I think, is awesome. 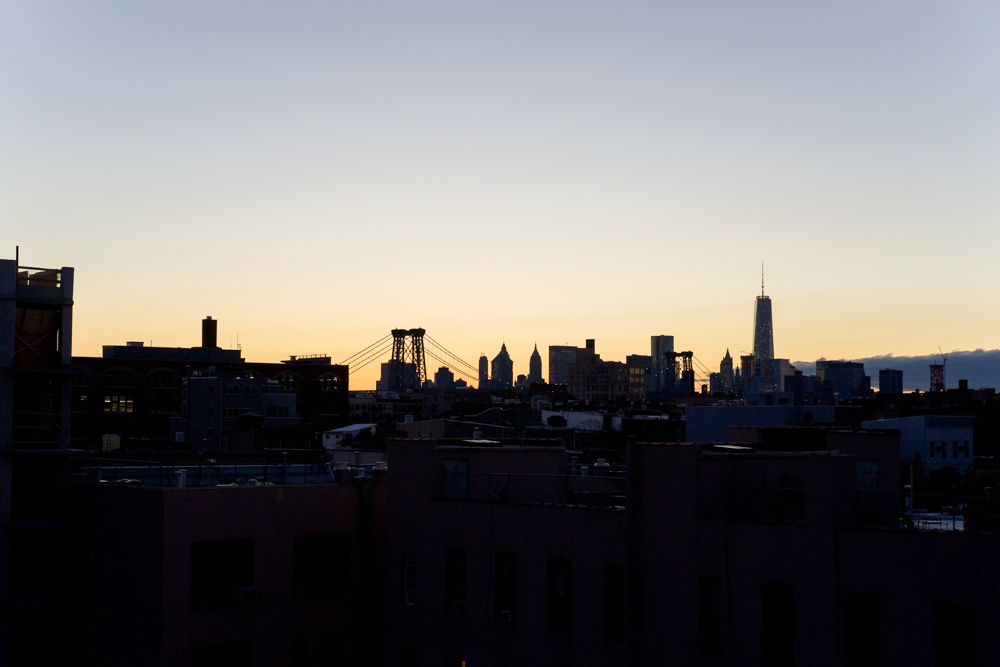