Paul Jackson draws the natural world in fascinating ways. In his glitch drawings, for example, he juxtaposes wild animals with computer malfunctions: one side of an ape’s face is photorealistic, while the other appears smeared and distorted. “The natural world and technology are the most inspirational things to me,” Paul explains, “and I love trying to combine them.”

Paul also combines living and dead creatures in his works, portraying a lioness, bear, or a “little jackal with his skull coming out,” as Paul writes on his website. “But he’s fine now.” This juxtaposition is important to the artist who wants people to see something curious and unique when looking at his work. “I want to try and show people images that they haven’t seen before, which in this day and age is very difficult,” Paul explains in the following interview with The Hundreds. “I want to show them a slightly different way of seeing things.” 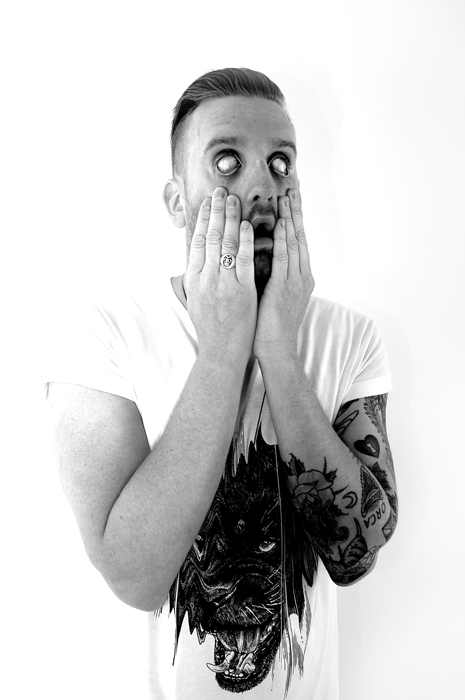 ZIO: What were some of your biggest influences as a kid?
PAUL JACKSON: I was very inspired by movies and cartoons like most kids. I was always and still am a huge Steven Spielberg fan and I have recently drawn a bunch of posters inspired by his movies. I have always been a fan of gadgets and being miniature—I always wanted to ride an ant; I know it’s weird. So I used to draw and make giant versions of small things. I once made a giant version of everything that was in my dad’s pocket—things like a credit card, battery and money. I was a weird kid.

When and why did you make the move from the U.K. to Toronto?
I’ve been going to Toronto since the early 2000s, but only started living here in 2013. I had a bunch of mates here from my touring days and just had a general good vibe from being here. As always though, the grass is always greener. There are pros and cons of everything, but I don’t regret the move. I, of course, miss my family loads but we stay in touch and see each other regularly.

Besides your family, what do you miss most about the U.K.?
I miss the beach in Brighton (where I’m from), and I miss the humor and general bitterness and sarcasm of British people. I also miss the rubbish TV. Brits know how to make rubbish, but very entertaining, television. I did miss Marmite also, but now I can get it in Canada, so crisis over. 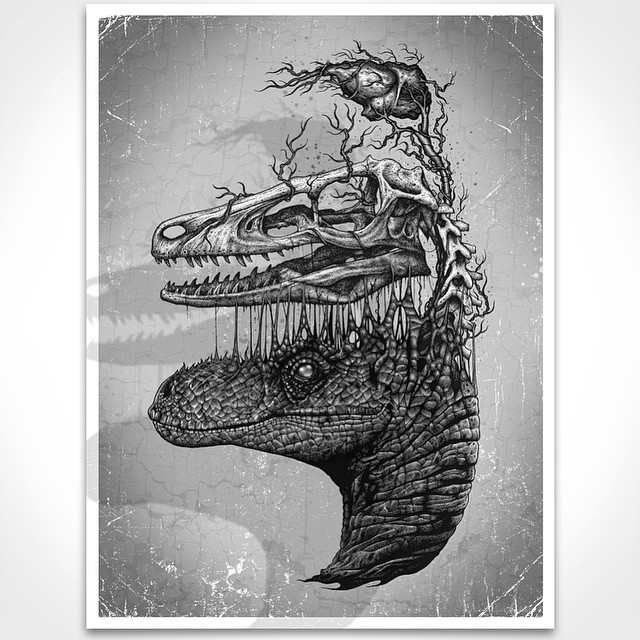 How did you develop your aesthetic? Did you go to art school or were you self-taught or both?
I did go to art school, but I’ll be honest, I didn’t really draw a lot. I spent most of my time experimenting with installations and technology. It was really fun, but generally didn’t help me too much in the long run. I left art school and went back to the drawing board—literally—and began trying to make a dent in the U.K. music scene with my art. I was in a band for a while and I used that platform to try and get work for other friends in bands and labels—it took a while, but eventually started to gain traction.

Can you describe your process of making a piece from start to finish?
I carry a sketchbook everywhere I go and I draw a few ideas in it a day, so that’s where it all begins. I then will create a mockup of the image using whatever reference I decide works best to draw from. Once I have a pretty decent foundation to draw from, I will begin the process by outlying the image in pencil and adding any extra elements where needed. Then I move onto the inking process. This can be pretty quick if the outline is tight. Once the drawing is complete, I scan it and add some color—if that’s what it requires—and add any extra touches that I feel suit it.

What music do you listen to when you’re creating?
I have a Spotify account, which rules because I can pretty much let it decide what I’m listening to as I work. One of the hardest parts of my day is choosing what to watch/listen to before I begin working—Western problems, huh? Once that vital decision is made, the drawing process can begin. Recently, I have been listening to a lot of Meat Loaf and I’m not sorry. 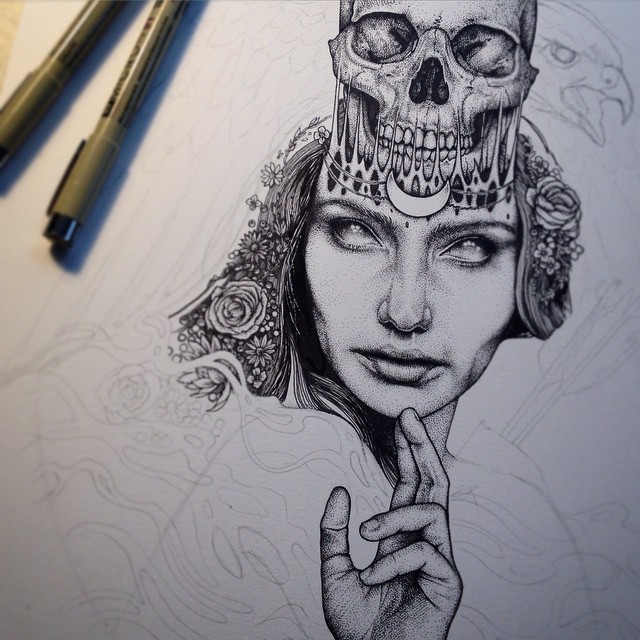 What do you want people to see or understand when looking at your work?
I want to try and show people images that they haven’t seen before, which in this day and age is very difficult. I want people to see that I’m trying to push myself creatively and show them a slightly different way of seeing things. I like to try and add a bit of humor when I can. I also like to show people that there is beauty in almost everything. Skulls don’t have to be a dark, deathly subject; they can be beautiful and thought provoking—after all, we all have one.

“BE INSPIRED, BUT DON’T EVER BE DISHEARTENED.”

What is the project you are most proud of and why?
I have really enjoyed working on the glitch drawings—the one I did for The Hundreds was the starting point for that actually. I have just loved the crossover of the natural world and the glitch/technology world. I recently did a big mural of one of those drawings that came out great and took me down a different path, so that was exciting. 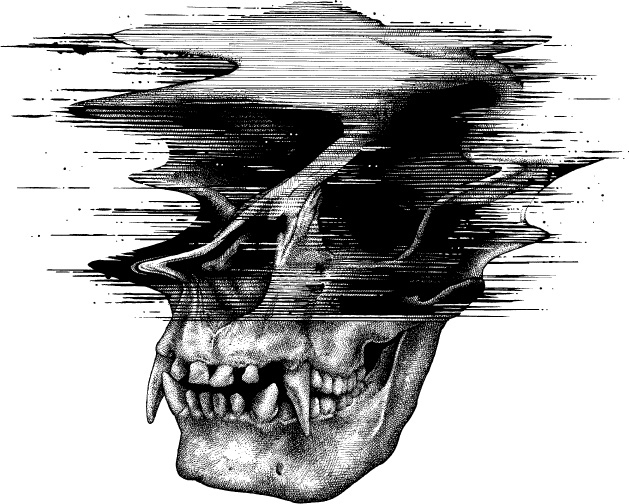 What tattoos do you have and who did them? Do you have any of your own artwork tattooed on you?
I do not have any of my own work tattooed. I guess I just haven’t really felt the need to at this stage. I kind of like getting a tattoo artist to do what they are great at and relax. One of my favorite tattoos is of an owl on my left forearm with an upside down triangle and an all-seeing eye, which was to mark the end of my band in 2008. It says, “No heaven without hell,” a basic metaphor for balance in life. Lynn Akura did the owl and she is based in Magnum Opus in Brighton, and Aaron Hill did the lettering from the Speakeasy in Toronto.

What haven’t you done that you would love to do one day?
I’d love to make an interactive piece of art one day. Something like a 5D experience where you hear the image, feel the image, and it’s 3D. No idea how, but I’m working on it.

I’d also love to design a stage set with original art for a show, possibly utilizing animation and layered drawings. Failing all of this, I’d like to release a book and have an art show in every major city in the world. Then I’ll draw a mural on the moon. 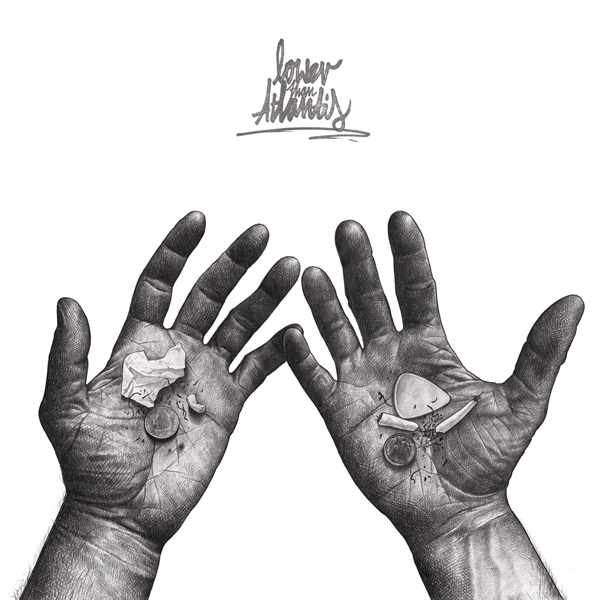 Prior to the mural on the moon, what’s next for you?
Next, I have a solo show in Toronto in June. Then I have a couple of group shows later in the year—one being a Stars Wars-themed show. I also have a couple more murals to do and am planning a new solo show for next year. It’s going to be based on living in the city and taking elements of nature, technology, and human evolution and combining it into miniature landscapes.

What’s your best piece of advice?
Never give up on the things that make you happy. It can seem really hard to make a living out of the things that make you happy, but it totally can happen—you just have ­­­­­to have persistence and belief. Also, don’t worry about what other people are doing. You aren’t in competition with anyone but yourself. Be inspired, but don’t ever be disheartened.

Keep up with Paul on his Instagram @pauljacksonlives and Facebook. You can purchase some of his work at pjackson.bigcartel.com.

His “Glitch Skull” capsule with The Hundreds can be found in the Online Shop.

Storytelling Towards Meaning :: A Visit to the Studio of Artist Jason Jagel

Galaxy in an Exhibit :: The Awe-Inspiring Work of Artist Adam Friedman