In a recent mural painted in Cozumel, Mexico, street artist Curiot painted one of his vibrant and iconic mythological creatures—but this time, it was stuffed into a tuna can and surrounded by sunbathing tourists. This mural was meant to address overfishing, coastal development, and polluted oceans, and was just one of 35 spectacular public murals painted during Sea Walls, a festival presented by international non-profit organization PangeaSeed. “Sea Walls brings together world-renowned contemporary artists from across the globe to paint for a purpose and bring vital ocean environmental issues into the spotlight,” explains PangeaSeed Executive director Tre’ Packard. 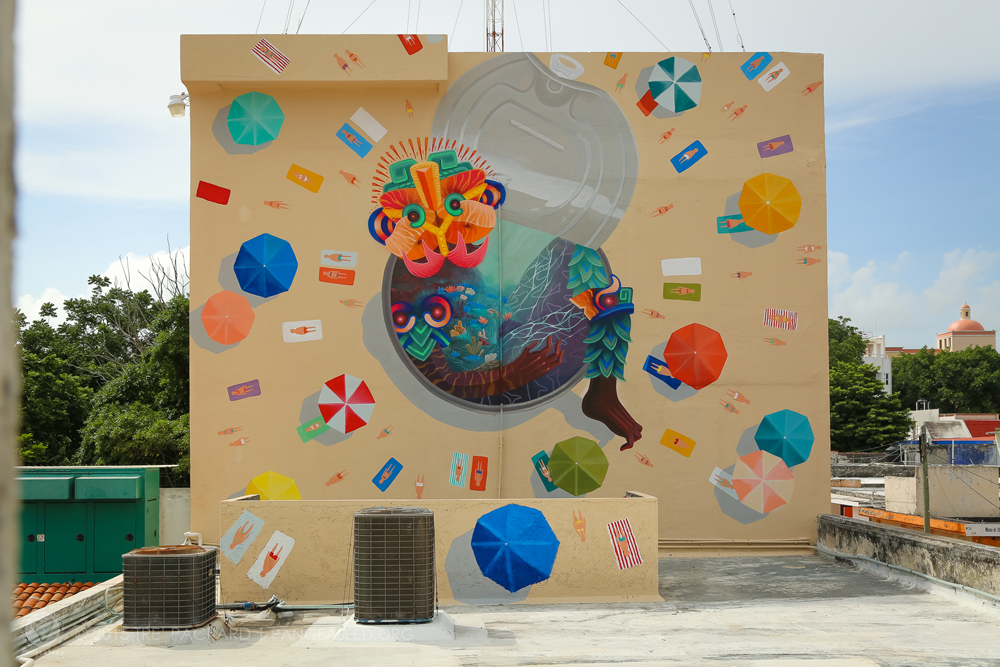 Packard founded PangeaSeed in Japan in 2009 in order to raise public awareness and educate people about the conservation of oceans and preservation of marine species such as sharks. “The ocean has limits and we are abusing those limits at break-neck speed,” Packard explains. “The United Nations now estimates that global fish stocks will be in full collapse by the year 2048. Even more frightening is that most shark species could be extinct in the next 10 to 20 years. The loss of apex predators, such as sharks, will surely cause catastrophic declines within an ecosystem that depends on them.” In the following interview, Packard talks about vital issues affecting our oceans today, how PangeaSeed is making a difference, and how you can too. 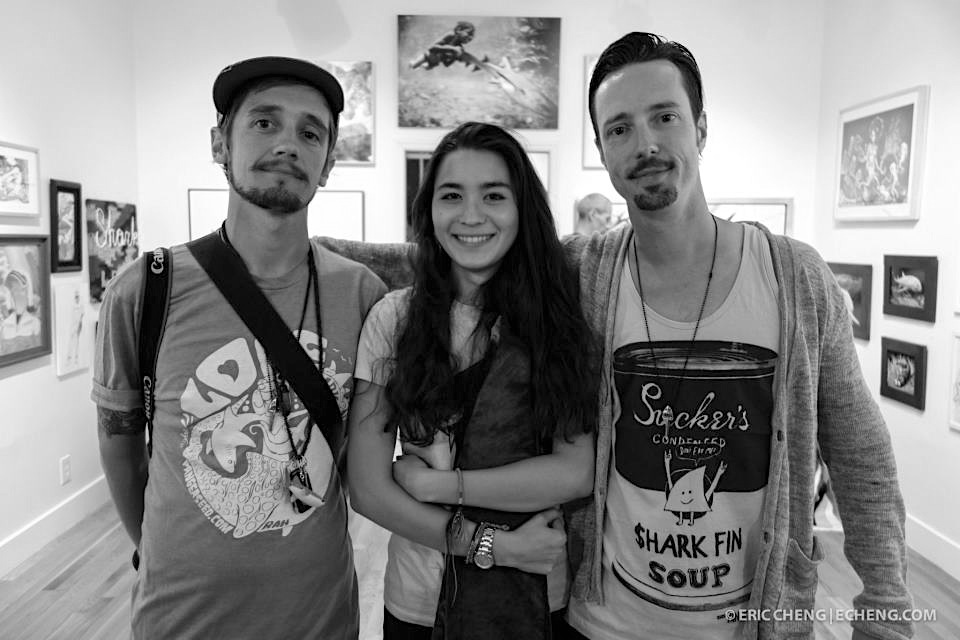 ZIO: How did PangeaSeed start?
TRE’ PACKARD: Over the past decade, while traveling throughout Southeast Asia, I was very fortunate to dive into some of the most amazing marine ecosystems on earth. But the one animal that continued to elude me, the one people fear most, was the shark. As an avid scuba diver and underwater photographer, I traveled to waters that were once deemed shark rich but are now empty, and that huge loss of such an essential predator resonated not only throughout the natural ecosystem and local economies, but also within myself. The questions, “Where were they?” and “Is there anybody out there?” came back to me over and over again.

These questions piqued my curiosity—what was going on? What I learned was absolutely staggering. The mass slaughter of sharks and other endangered marine species throughout the region was overwhelming. From Hong Kong to Japan, the Pacific Ocean to the South China Sea, I found myself literally up to my neck in the bodies and fins of what science considers to be some of the most important animals in the ocean. 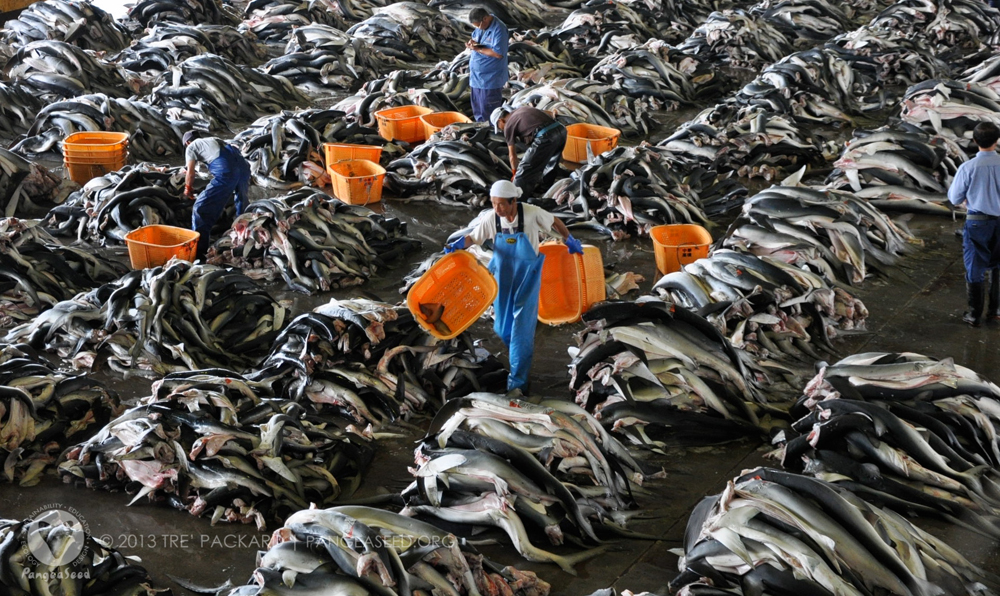 Feeling compelled to take action, I founded Japan’s first and only non-profit shark conservation organization, PangeaSeed. Our goal through grassroots education, inspiration, and awareness is to encourage the younger generation to develop an understanding of the relationship we all have with sharks and the oceans as well as the direct effect our collective lifestyles and consumption habits have on the both.

What does PangeaSeed mean?
The word “pangea” derives from ancient Greek and means “entire earth.” It’s the concept of the super continent that was surrounded by a single vast ocean that existed over 250 million years ago. Sharks balanced and controlled the oceans then, and they continue to do so now, maintaining their position at the top of the marine food chain—but for how much longer?

Our organization, PangeaSeed, aims to unify and connect individuals around the world, opening a dialog to share ideas and develop a better global understanding of our connection with sharks and the oceans. No matter where you are in the world, your lifestyle and consumption habits have positive and negative effects on every animal (including humans) and ecosystem on the planet. In short, like Pangea the super continent, we are all connected.

Usually when someone thinks of the word “seed,” it invokes an image of growth, progress and evolution, and we strive to grow together to develop a better global understanding of the need to protect sharks and preserve the oceans. It’s also an acronym that truly describes our mission:  Sustainability, Education, Ecology, and Design. 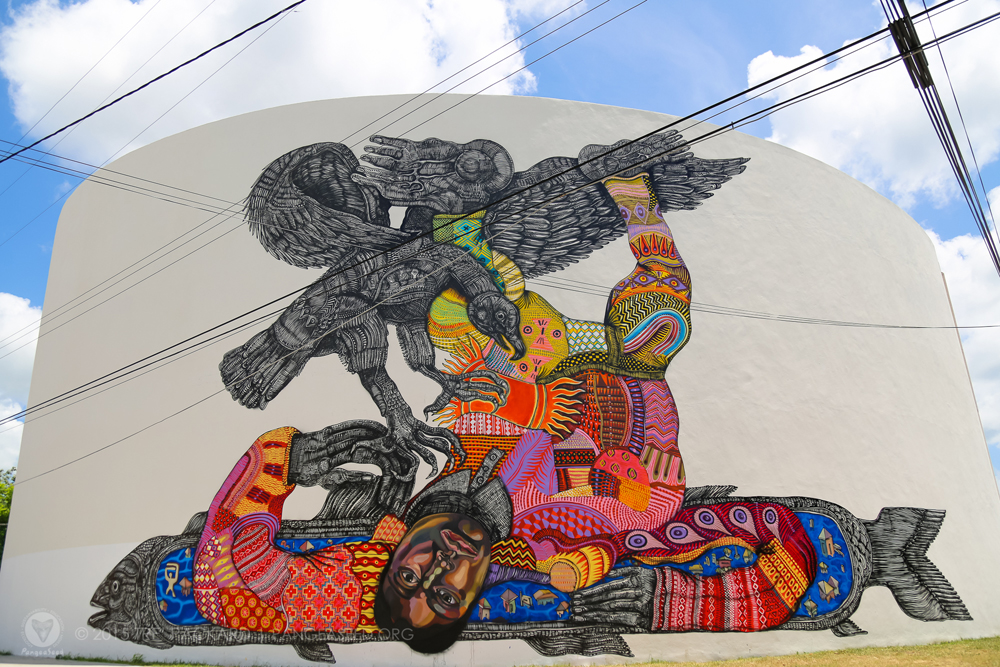 What was your original vision for PangeaSeed? How has your vision evolved since then?
The organization has definitely grown in many ways from the original inception five years ago. When we first began, we were a part-time effort that I started in my home in Tokyo, Japan, with nothing more than my laptop, an Internet connection, and a lot of serious determination to make a difference in the world. Through a lot of hard work, long hours, and dedication, we’ve transformed PangeaSeed into an internationally active organization with members in every corner of our globe.

Though PangeaSeed is about ocean preservation in general, can you talk a bit more about the specific focus on sharks?
Sharks have maintained a pivotal existence in our marine ecosystems for over 450 million years as the ultimate apex predator—older than the dinosaurs! They’ve survived five major extinctions, and yet they continue to soldier on, assuming their responsibility to shape and balance the delicate ocean ecosystem reigning at the top of the food chain. But within the last few decades humans have drastically depleted our oceans of sharks, and an estimated 70 to 100-million sharks are slaughtered annually.

As an apex predator, sharks play an important and unique role in the ocean’s ecosystem, keeping fish populations in balance, and ensuring other species do not grow uncontrollably. And yet the odds are stacked against them: Late to mature and having few offspring, sharks are highly vulnerable to the pressures of overfishing. 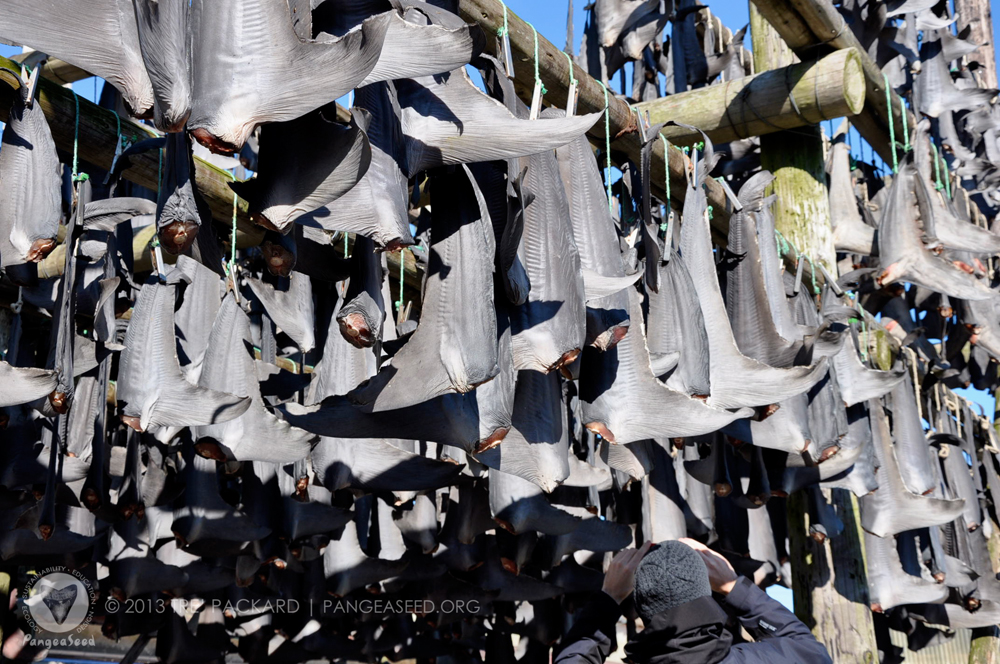 The ocean has limits and we are abusing those limits at break-neck speed. The United Nations now estimates that global fish stocks will be in full collapse by the year 2048 if we don’t change current destructive fishing and consumption habits. Even more frightening, is that most shark species could be extinct in the next 10 to 20 years. The loss of apex predators, such as sharks, will surely cause catastrophic declines within an ecosystem that depends on them.

Aside from my responses to the previous questions, sharks are simply rad. Over the years, I have been so lucky to spend time with sharks in their natural habitats. Having first-hand encounters with these majestic creatures in their environment and on their terms, well, I’m here to tell you that public perception of these animals is all wrong.

What is Sea Walls?
Sea Walls: Murals for Oceans is the first movement of its kind to help save our seas via public art and activism—or as we like to call it, ARTivism. Sea Walls brings together world-renowned contemporary artists from across the globe to paint for a purpose and bring vital ocean environmental issues into the spotlight.

We painted our first Sea Wall mural in 2011 in Sri Lanka, focusing on the slaughter of manta rays. It was an incredible experience with a very positive response from the local community as well as among our global network of supporters. Since then, the project has turned into a full-fledged globally renowned mural festival with our largest series of installations held in Cozumel, Mexico this past July. The festival featured over 35 international artists, all creating large-scale murals and public artworks addressing many of the world’s most pressing ocean environmental issues. 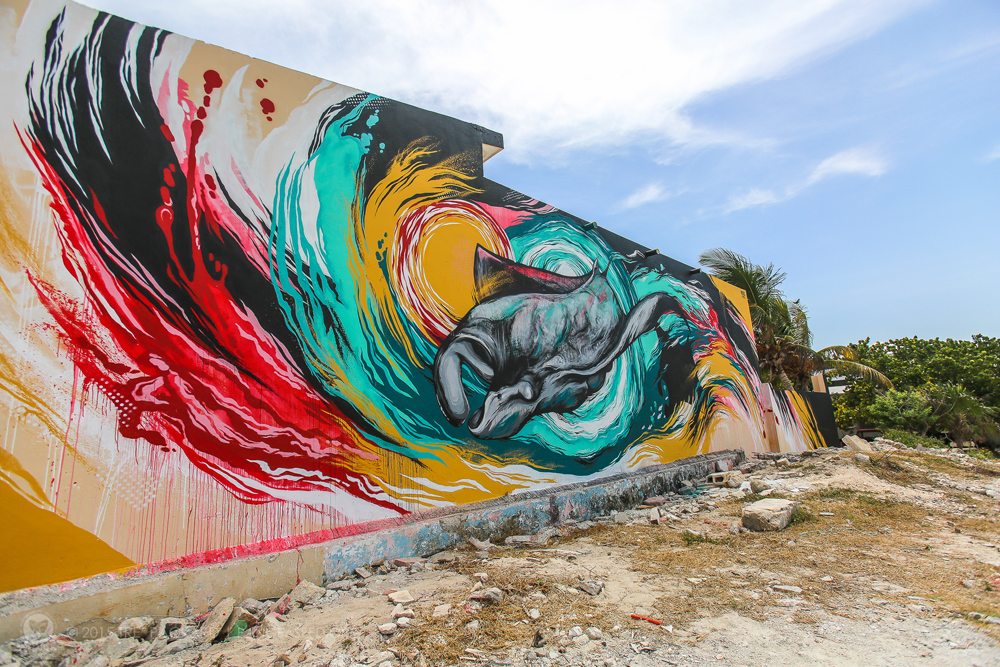 What artists haven’t you worked with that you would love to work with in the future?
Oh, man. Off the top of my head, I’d say Dave Kinsey and Aaron Kai are two artists I personally would like to create large-scale public artwork with via Sea Walls. Both artists are very different in terms of aesthetic and personal backgrounds, though each has such a unique artistic voice and vision that defines them.

We’ve worked with both Kinsey and Aaron in other capacities such as fine art print releases and original works for fundraising and campaign purposes. Actually, Kinsey is one of the first artists I reached out to when I held the first PangeaSeed group exhibition focusing on shark conservation back in 2010 in Tokyo, Japan. Kinsey has been a good friend and close collaborator ever since. His support is unwavering and truly appreciated.

What’s next for PangeaSeed?
Fundraising and more projects are a critical activity for us, like Sea Walls: Murals for Oceans activations in New Zealand, Canada, and the West Coast of the U.S. My wife, Akira (PangeaSeed Project Manager), and I have been on the road for over two-and-half months curating projects in Latin America and Asia this summer.

Coming from a background that included skateboarding and punk rock music, the “DIY school of thought,” has served well for PangeaSeed. We’ve maintained a “no prisoners approach” with our future, educating and enabling our team to maintain a strong track record of work, all on a shoestring budget. We have an incredible volunteer support network to help organize and curate projects in the field. My aim is to continue pushing forward, producing strong work that increases awareness of our message and makes a difference in the world.

If there is one aspect of PangeaSeed’s success that I would like to share with The Hundreds readers, it would be to follow your passions and trust your instincts. You don’t need a lot to get started—educate yourself, work hard, and surround yourself by people contributing to a healthy and sustainable future. Get the right people on the bus, create a sense of urgency around your goals, and don’t confuse being popular with doing the right thing—at least in the short term. In the end, we are all in the same boat on this gorgeous, special, and very delicate planet we call home.

SPOILED ROTTEN :: MEGGS ON DECAY AND HIS LATEST WORKS IN DETROIT