Storyboarding for me is probably the most important thing to do when I prepare my shoots. Visualizing the sequences on paper and writing down your shots is a must. It’s a time saver and a standard when it comes to filming or directing. You don’t need to be a great drawer to storyboard. As long as you understand each drawing and can explain it to your camera man, that’s all that matters. But knowing how to draw properly is always an A+ in cool points. Alexandre Brakha aka Osmoze probably has thousands of cool points when it comes to storyboarding.

Osmoze is one of those artists that is not scared to venture into different mediums. His balance between creative and technical skills gives him enough freedom to do whatever he wants without any real constraints. He is a complete artist that can run his own solo exhibit or do freelance work for big clients such as the Superbowl, Bon Jovi, Ubisoft, etc. – the only limit he has is his own imagination.

Originally from Marseille, France, Osmoze moved to Montreal about 7 years ago. His debut, like many French artists I know, started in graffiti. His work can be described as a mish-mash of thick graffiti lines with manga-esque characters. He believes in creating characters that evolve within their own world and treats his artwork like a movie, where each drawing is a scene from a film. I caught up with him last week at his home studio over some home-brewed beer. 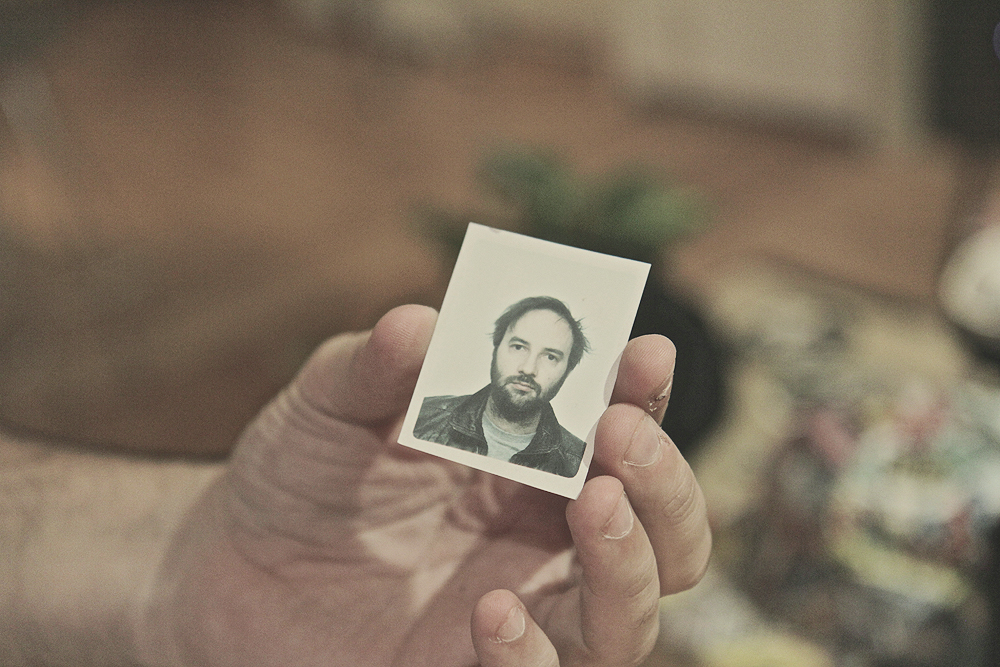 JOHNNY: How did you come up with an alias like Osmoze?
OSMOZE: It just happened. It was never really a choice I made. I know back then I used to love drawing O’s. It was a letter that I was attracted to. One day, a friend suggested to me to call myself OSMOSE, I said why not. I just flipped the S to a Z into OSMOZE since I loved drawing Z’s. Then voilà. 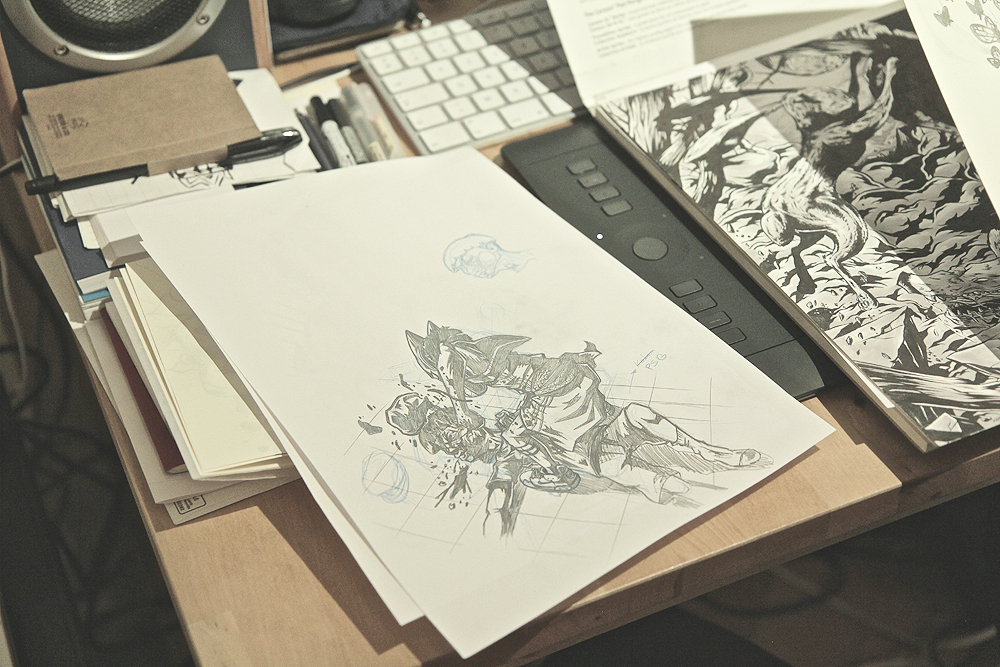 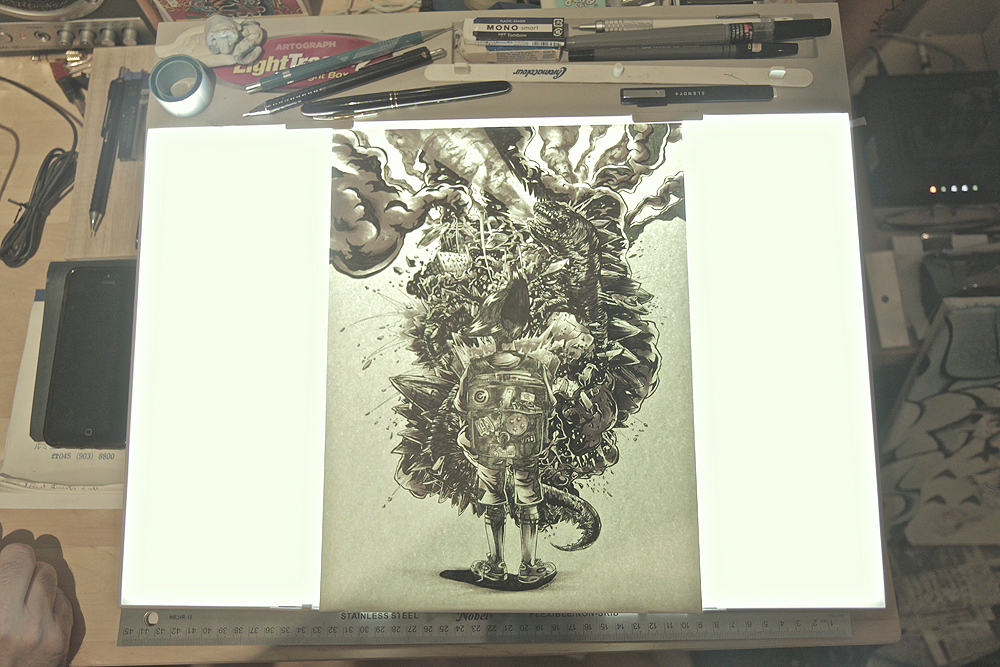 The first time I visited France was somewhere in the mid ’90s. I was maybe in grade 5. The thing I remembered the most was the morning cartoons on TV. It was not your traditional North American cartoon. It was all Japanese Anime in the morning. How much of an impact has the relationship France-Japan help evolve the art form in Europe?
The relationship France-Japan at that time played a major role in it. The big production house in France had a big interest in Japanese animation and there was also a low cost factor that came to play as well. But the two countries [were] known internationally for their work in animation. So what happened is that there was a lot of co-production going on at that time. It was a logical and smart decision for both camps. And I think kids in Europe were lucky to have anime part of their childhood and upbringing. Something that North American kids did not have access [to] at all. I do believe that without the accessibility to Japanese animation in France, the evolution of French artists would have been different today. Even in the graffiti world. Shows like Goldorak, Bioman, even Dragon Ball [Z] help us develop our style overall. 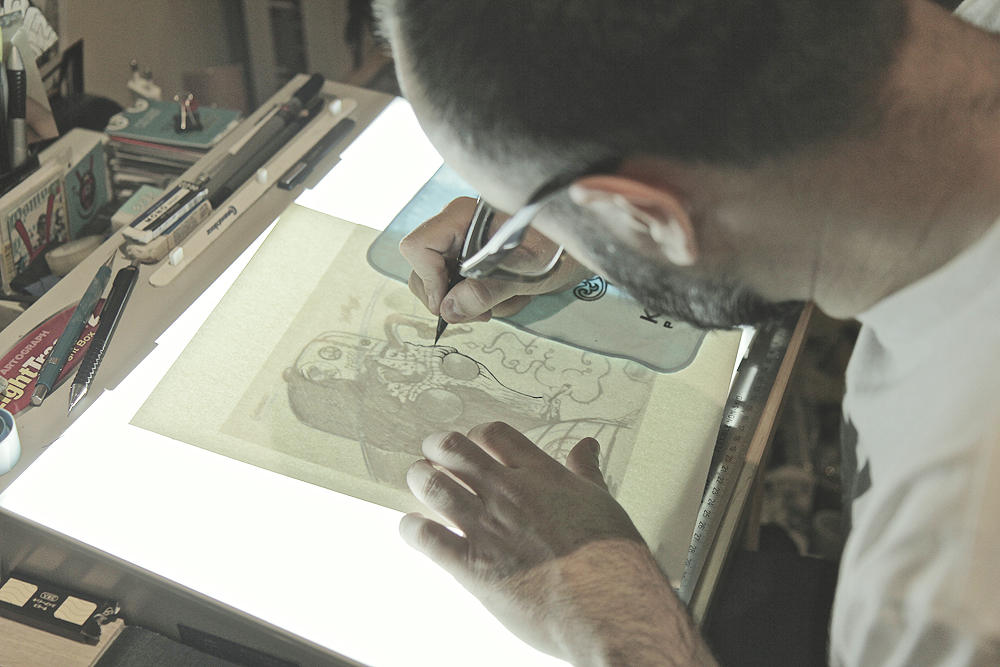 So how would you describe your drawing style then?
For sure the majority of my influences are coming from Japanese animation and manga, but American and European comics as well. I think my work is a mix of everything I love and that’s why I really like graffiti art. My drawings are academic in the way to do, but sometimes I like to add something from another style just to try to find the good visual to express my idea. 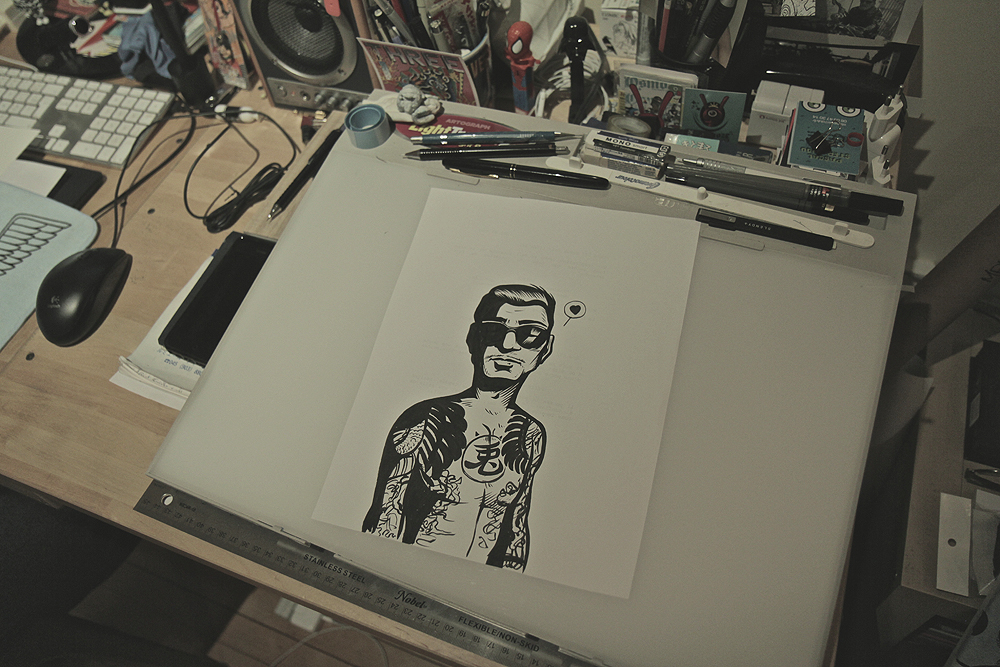 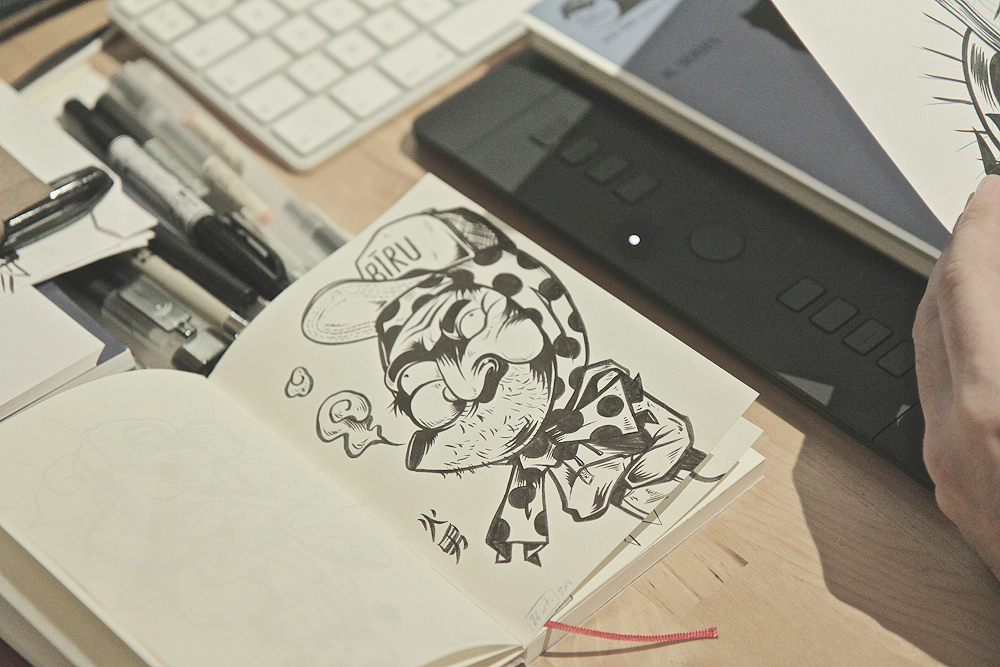 I notice your usage of bold lines. Can you explain why you decide to incorporate that into your art?
I think it comes mainly from my graffiti background. The usage of the thick, bold lines has always been something that I enjoyed doing with my characters. I like to blend the more classical style with the touch of a thick outline. It gives it more impact and force to the drawing. 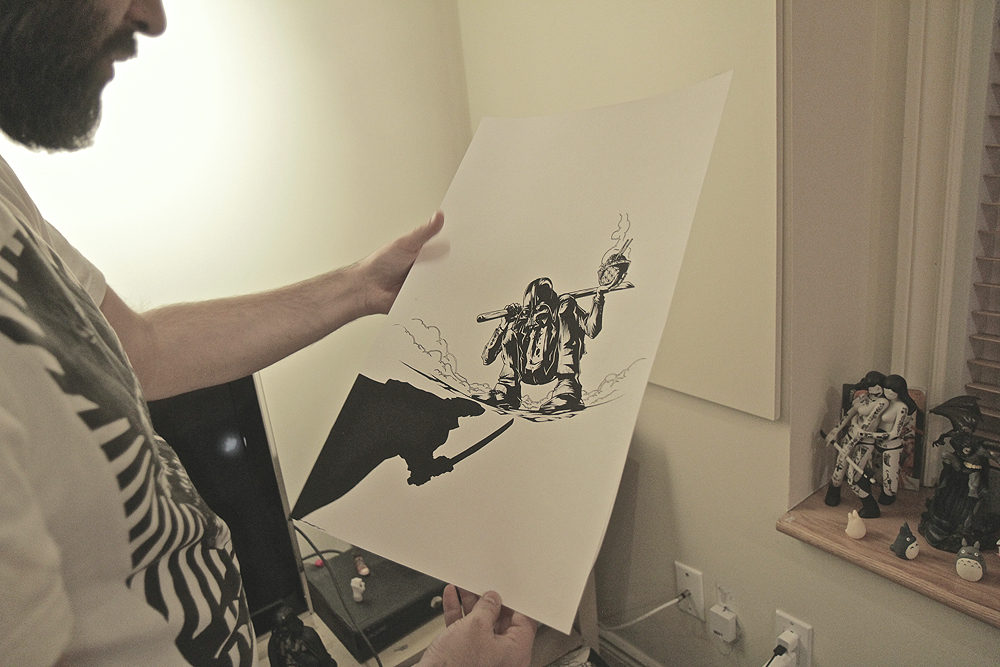 But coming from Montreal, many people kind of associate the boldness to French artists. What do you think of that categorization?
Actually, it’s the French artists that took that style from the New York graffiti scene, but it might be also from the “ligne claire (clear line)” era done by Hergé in his Tintin comic – that usage of a clear strong line around the characters. Who knows. But we do love using thick lines! [laughs] 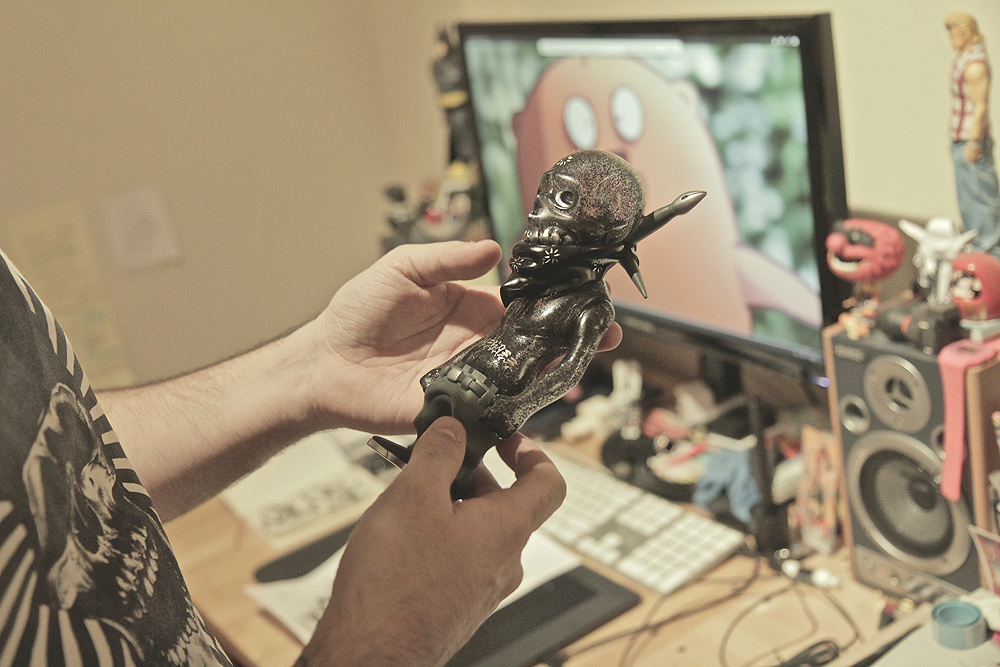 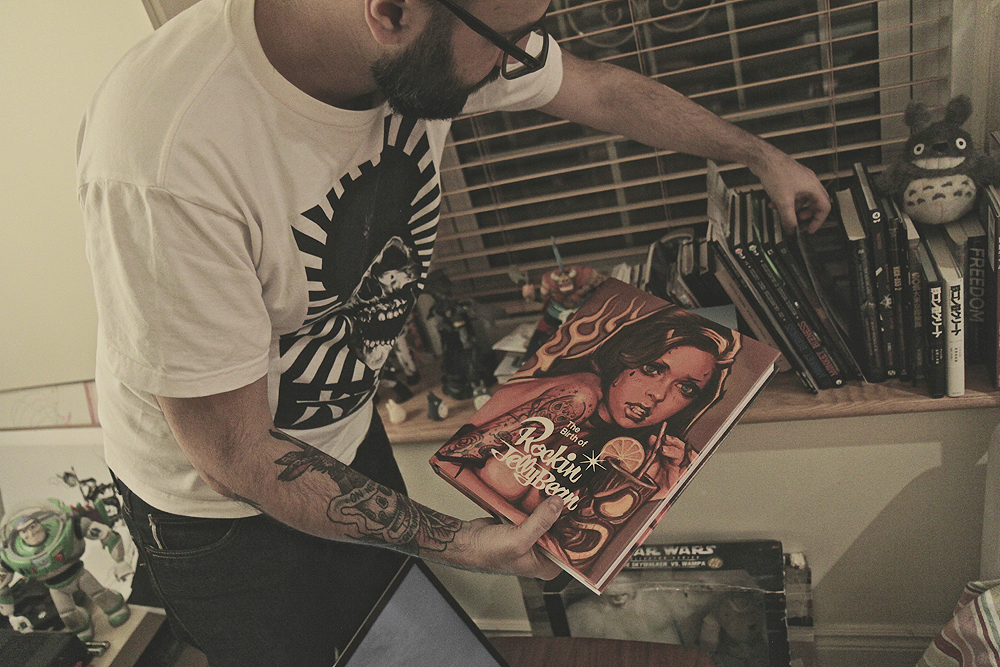 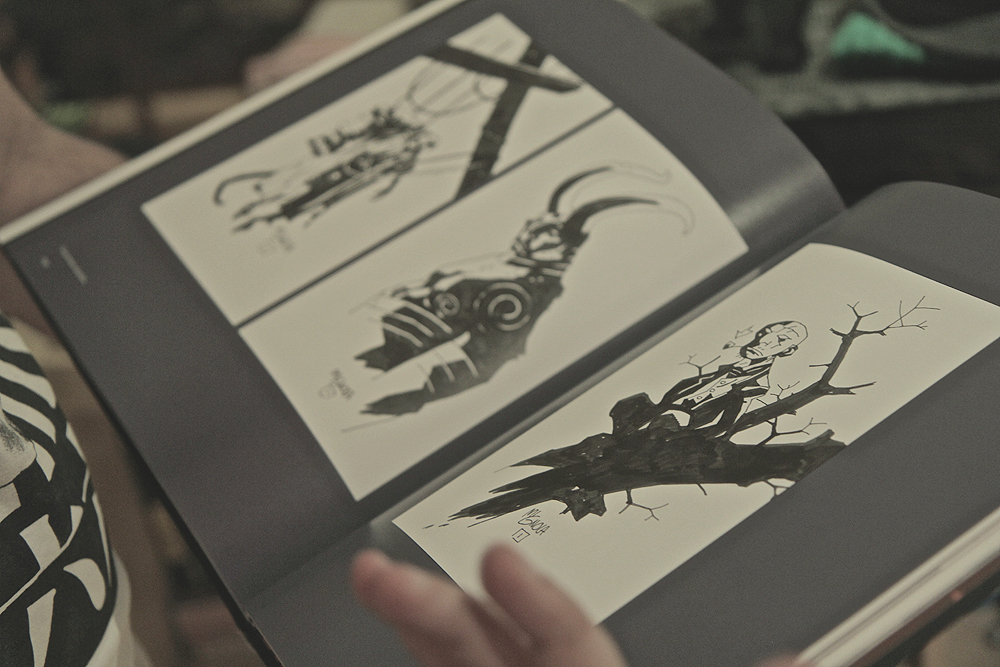 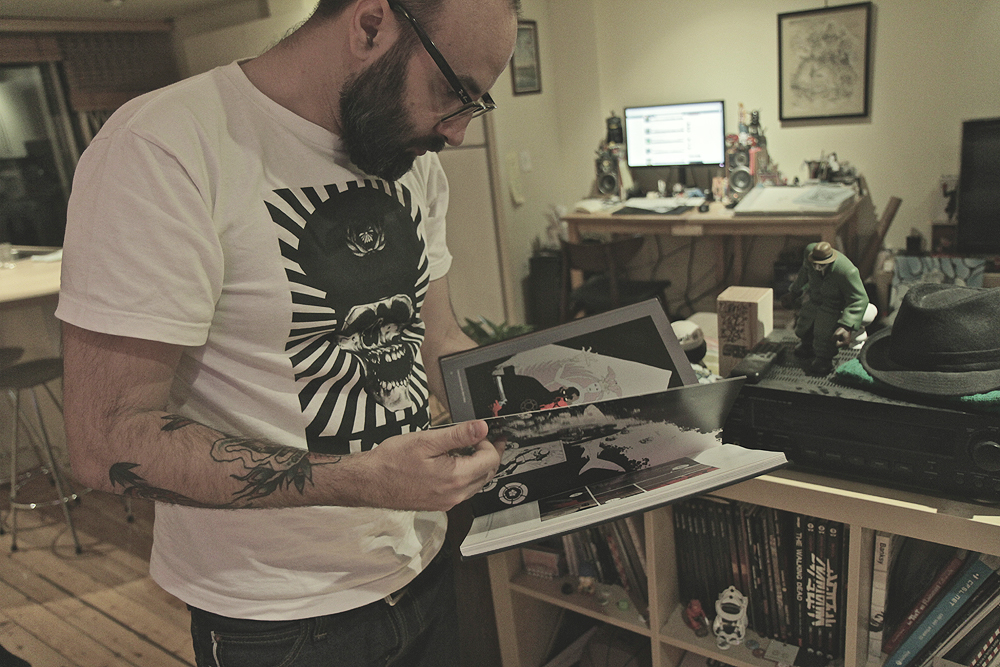 Which artists inspire you?
The list is too long [laughs]. I really like classic artists and artists with different styles. But Mike Mignola (Hellboy) and Otomo Katsuhiro (Akira) are two of my favourite artists ever. But people from the music scene, food, cinema, etc., can inspire me too. 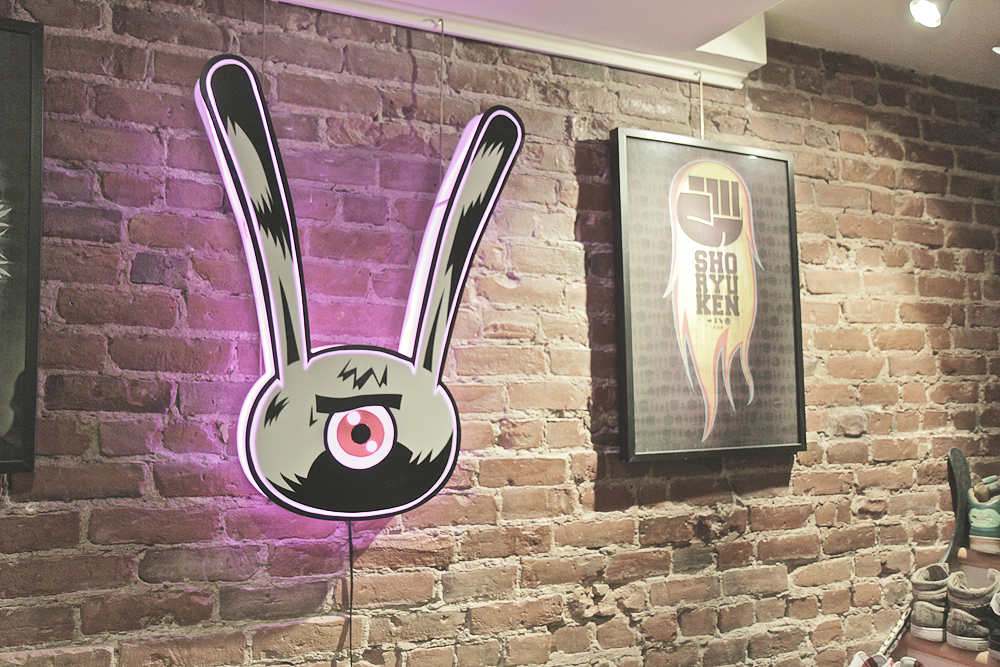 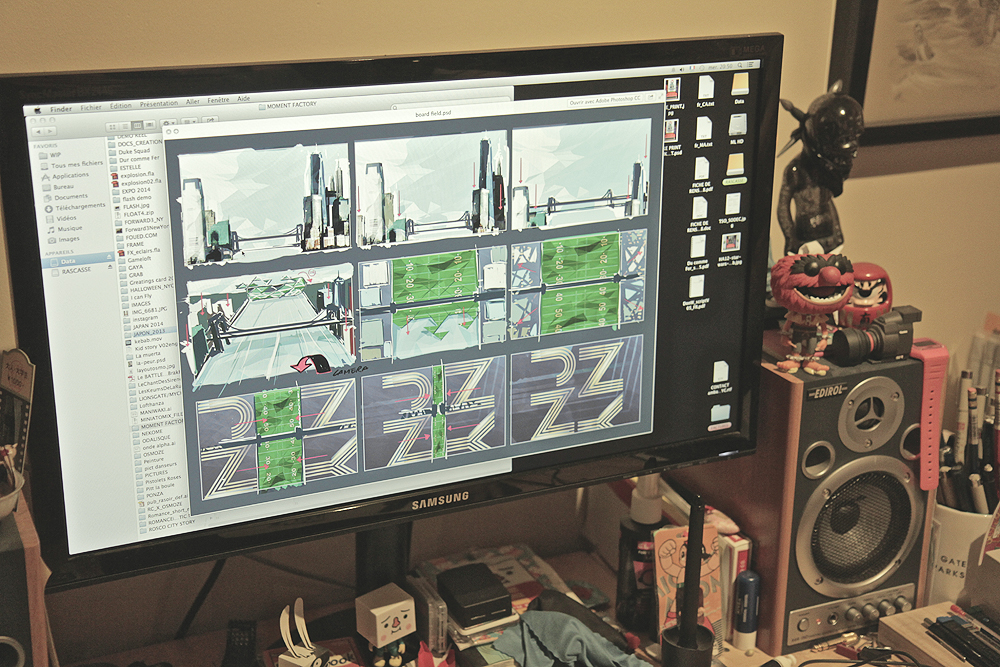 You have a great background as a visual artist, but you don’t only focus on the visuals. How important is it for artists like yourself to not only create art, but to implement your work into different mediums such as videos, installations, etc.?
To be open-minded to other mediums is important, I think, to find your own way. I want to tell stories, and for me if video is better, why not? I love drawing and it is maybe the last thing I will do before dying, but an image is only static – and when I understood that, my only envy was to animate every sketch I could do. 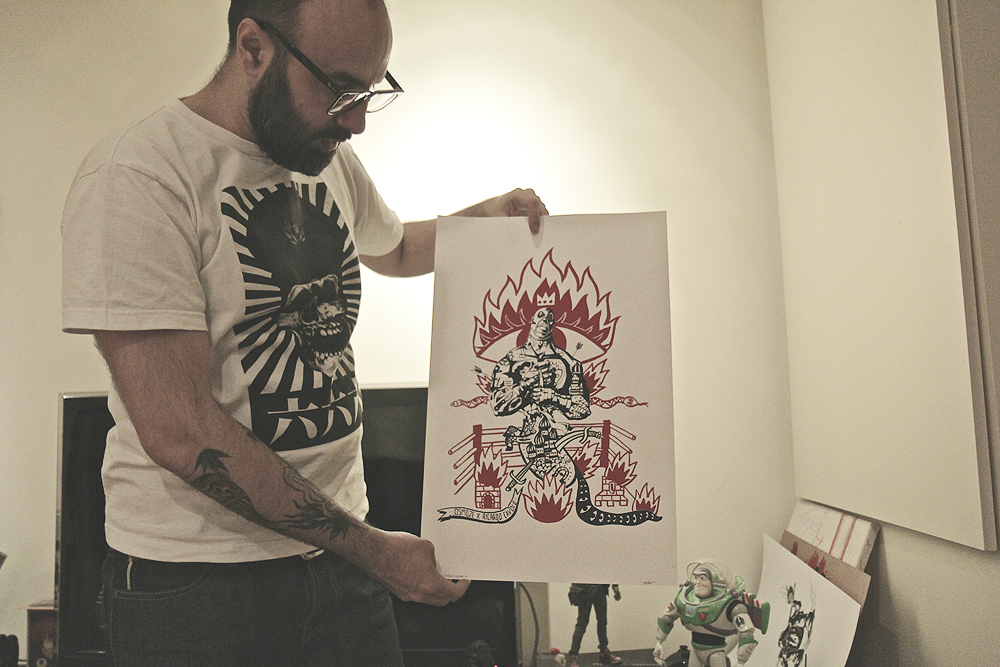 We see more often now collaborations amongst artists. How does that work when it comes to painting or drawing two different styles on a canvas?
I can draw on computer and paper – or canvas. I am really curious to learn new skills or adapt mine in order to collaborate in the best way with another artist and [I like] that even if I have to make myself in danger, I [get] to do something I never did before. The most important [thing] is why we do this piece – the spirit of the collaboration, and not only the result. 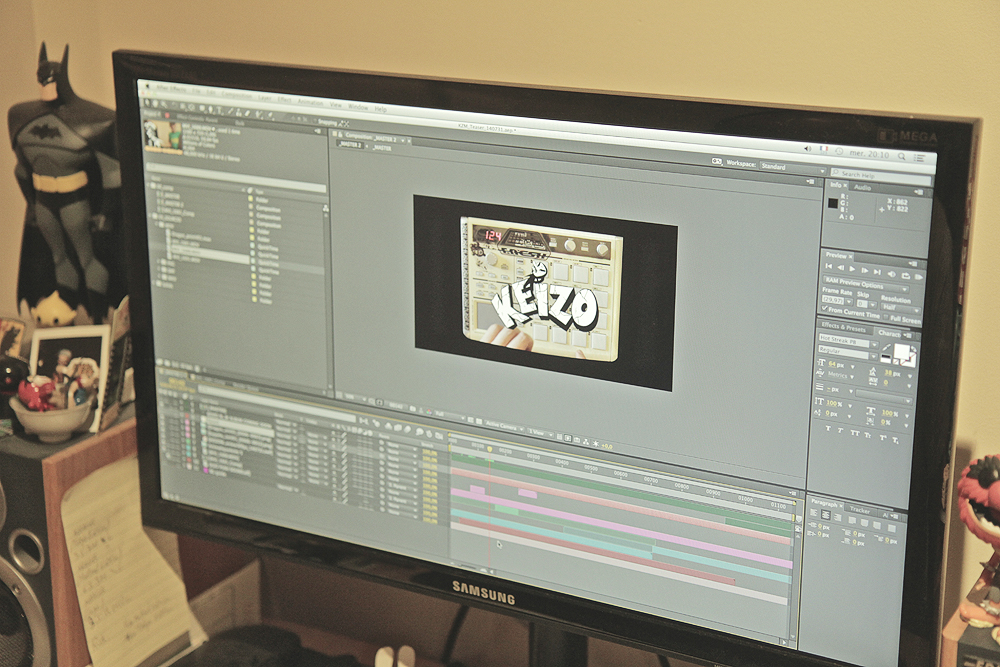 On your recent trip to Japan, you were telling me about a future collaboration with a well-known Kapanese producer. Can you tell us about it?
During my last trip, my friend Ben Lorph (photographer from France) introduced me to a great artist named KEIZOmachine!. His music with his band Hifana is awesome! We had lot of fun and we decided to do a trailer/teaser mixing video, 2D animations and motion design for his next album. I talked about it to a friend here in Montreal, Tetsouille, not to appoint, and it is in progress. Soon on the web. To explain why we do this collaboration, I can say that Keizo is the kind of artist I like, he is [a] musician, but open-minded to all art, and [he’s a] beer lover [laughs]. I also did few collaborations in Japan with lot of people, like a music video for a Ska band, live paintings with local artists etc. Oh! One more thing, I will work on a collaboration with Groundriddim Maharo from Tokyo too. 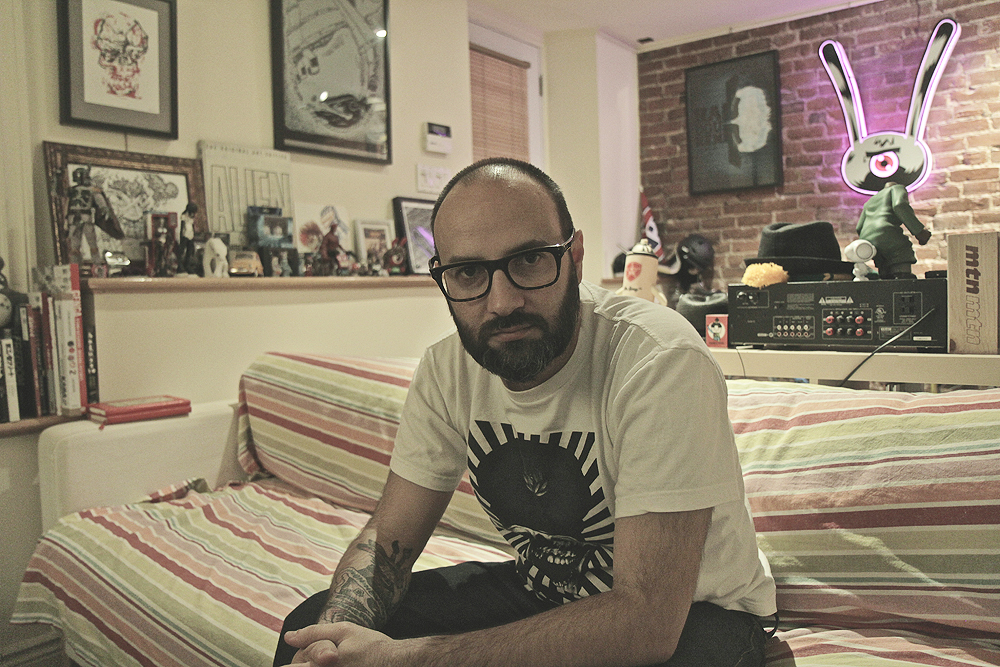 What else is in the works from you in the near future?
The near future is focused on my animated TV series project called All for Nuts, produced by 4.21 productions in France. I  just finished the pilot and deals are in progress with TV channels. It [takes] really long to organize this kind of production, but I’m crossing my fingers for it. I am in progress on my next drawing/painting exhibition too. But more are coming, I always need to have lots of projects at the same time on my desk!