Straight off of the puzzling halt of DVDASA, The Hundreds’ fam Dave Choe and his camp of scraggly vagabonds have officially moved on to new and better things with the first album release of MANGCHI, an “experimental gospel praise band,” with the literal meaning of “hammer,” and the figurative meaning of I have no idea. The album, entitled “Nega Mola,” was produced on a few-week music bender in “North Korea Town,” and was precluded with probably the best Instagram feeds ever. 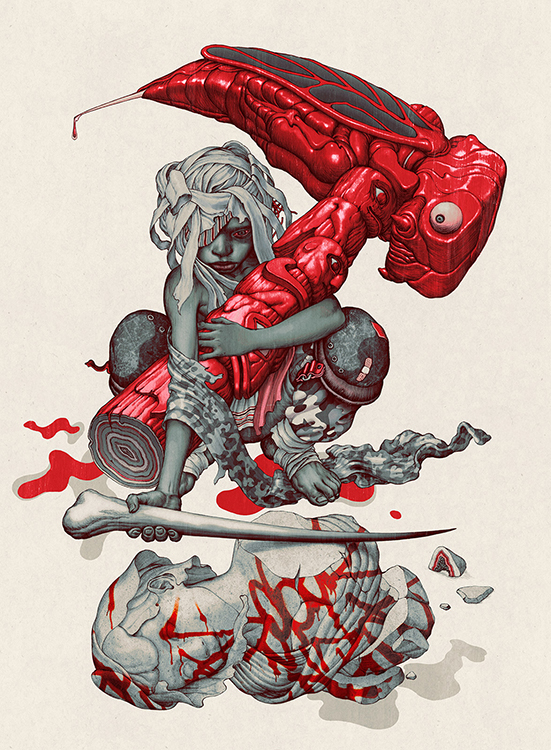 The artwork for the album is designed by our good friend James Jean, who you probably should remember from THIS.

“A fart from a child born without a butthole,” is what MANGCHI sounds like said 1 of the 2 people who were let into a room to hear this new sound. The second person, John Cusack, actor/comedian/artist from such films as “SAY ANYTHING” and “ROADSIDE PROPHETS” described the music as “If Korn, Depeche Mode and the Beastie Boys were forced in a bus together to tour north korea, and all their lead singers quit in the middle of the tour, and the band picked up the korean versions of Debbie Gibson, Stacey-Q, and buddy Holly to replace the singers who just happened to be hitchhiking on The north korean countryside road, and then they all got in a tour bus accident and all got whiplash and broken bones, but Kim JONG UN made them play a show anyways with broken necks right on the side of road using the broken car parts as instruments over the non-existent ambulance sirens, that’s the closest I can get to describing the MANGCHI sound.... So basically listening to GOD’s voice as he’s hitting puberty... so basically Art.”

To learn more about MANCHI and their latest album drop, watch this exceedingly informative video they put together for your convenience:

And, of course, you’re going to want to listen to the album, here: