Scrolling through my Instagram feed, I got excited to find out that Norm Will Rise was coming to Milan for the 20th Milano Tattoo Convention. A well-known tattoo artist with impressive lettering skills, Norm Will Rise has been tattooing only for the past 9 years. He began his career as a graffiti writer up in San Francisco, California, and soon, his dedication, hard work, and huge block letters opened the doors for him to 3 of the most globally well-known crews: AWR, MSK, and TSL. Walking up to his booth, I easily recognized him even though he was deeply concentrated in the process of tattooing a guy’s jawbone. When he finished, we sat in the cafeteria to talk, and between the questions below, I really got to know and appreciate this guy. He has a great attitude and some profound life tips I should adopt myself, like: If you wanna be the best, just do everything necessary to reach your goal and don’t give a shit about the rest (haters, obstacles, you name it). 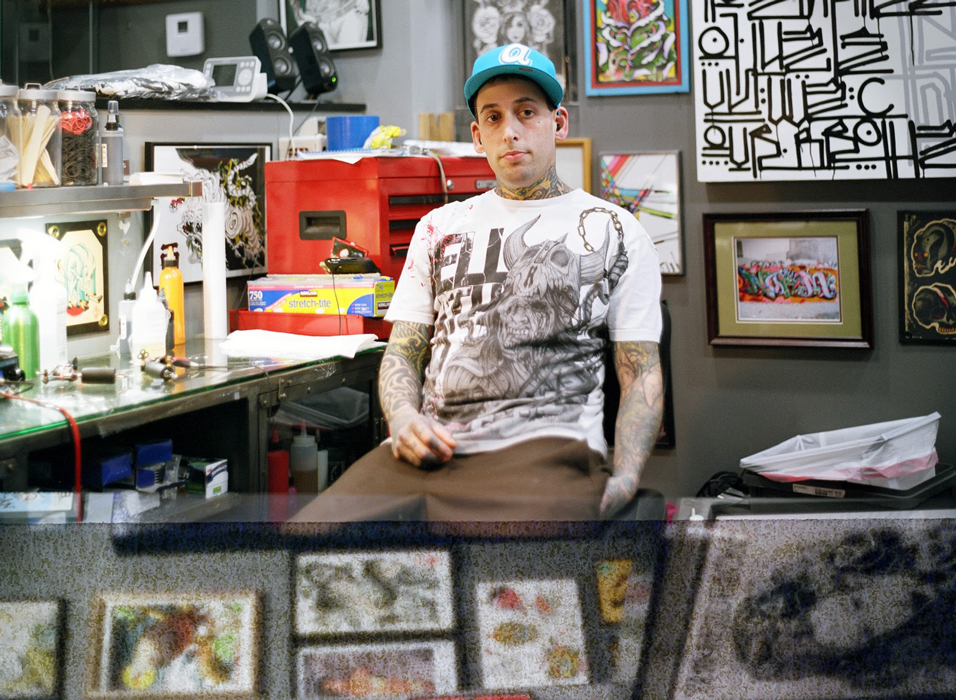 SPRAYTRAINS: [What’s your] favorite place on earth right now?
NORM WILL RISE: I think there are so many nice places here that I cannot say what’s my favorite place. But maybe one of the best I have been recently is Hong Kong, which is pretty cool and I like London a lot – yeah, probably London is the coolest. Right now I live in Honolulu, where I run my business.

How would you present this Norm Will Rise guy to the readers?
Best way to get to know Norm Will Rise will be to Google him. It’s the easiest way, and then you can figure out everything. [This is] actually a hard question. I like what I do, so doing it for me, it’s very easy – easy to be myself and do what I do, it’s not hard. It’s hard in other places in life, but in work it’s very easy.

When did you started with graffiti, where we you?
I am from Baltimore, I moved to Southern California and then to the San Francisco Area where I started writing graffiti in 1998. I learned everything about graffiti and stealing and everything fucked up about graffiti in SF from Fate. He taught me all about writing and from then on, it was a big mess of shit. I was around 24 when I started, already too old to start and go through things like get arrested and get beaten up, but I really loved graffiti so nothing could have stopped me.

“THE STEALING WAS A MANDATORY PART OF THE PROCESS OF LEARNING… YOU CAN NEVER HAVE ENOUGH SPRAY PAINT.”

What were your main targets back than?
Big, big illegal spots around town. Huge block letters on billboards, legends and big private spaces. I was going out during the night, [so] best hours were from late to early, and since I was living with Fate, it was more like graffiti boot-camp. It was a really good time.

[What were the] main activities of this boot-camp?
The stealing was a mandatory part of the process of learning, especially since you can never have enough spray paint. When you have no money and you wanna paint with 100 cans of spray paint, it’s the only way. Back then it was different, it was easier and I didn’t care, now it’s something I stopped doing because I am older and I don’t wanna get in trouble. Plus, there are cameras every-fucking-where. Last time I was in Walmart and I was exchanging goods with 200 cans of silver and black and they were – “Why you need all of these? That’s a lot of spray paint.” And I am like, “I am painting my own garage, I happen to have a big one,” and got away with it. 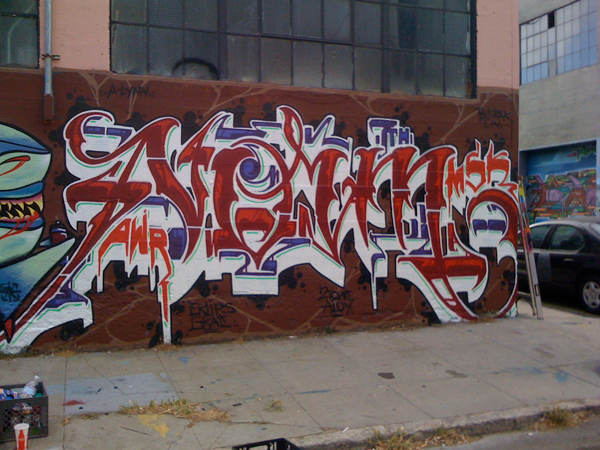 How about trainbombing?
Because of where I lived, there were no trains so I never experienced trainbombing. I mean, there are the commuter trains, but putting your name up them it’s pretty stupid, it’s not worth it. I painted occasional freight trains up in Oakland, but besides that, I like to see my graffiti after I did it.

Were you doing sketches to improve your skills?
I did lots of painting and I was looking up at people from my crew. I didn’t really look at anything else, no books. We had the Internet though, and with that, you don’t need anything else anymore. I can look up something, get ideas. and then go paint my thing on the wall.

How do you feel about this easy, instant and accessible connection [with the Internet]?
Internet changed everything. It’s cool for doing business and it’s cool for other aspects. Like you can see something today that you wouldn’t have seen ever. Lots also depends by what you are interested in and it’s incredibly fast to get to it, so you are skipping the waiting process.

For example, the guy that taught me how to tattoo, Marcus Pacheco. He’s like the hardest person to find pictures of. If you Google him you will find few pictures of his works, when he has been tattooing for more than 30 years. He has no Instagram, but he’s all booked every single day, all day long.

What’s the scene like in LA compared to other cities in the states?
About this topic, to tell you the truth, as far as graffiti goes, I haven’t paid attention to anything outside the people that I know because I look at tattoo stuff all the time, even if I try to not look at tattoo stuff. If somebody really did a sick graffiti piece, I will probably see it but there are so many people out there I cannot pay attention to everything. It’s too crazy too much.

What happens sometimes is me thinking, “Oh, I wanna see what AERO is doing,” and I go on Instagram and say, “Oh fuck, his last 5 days were insane. I wanna go visit him and paint with him.” Certain people that I love – those are the ones that I pay attention to. 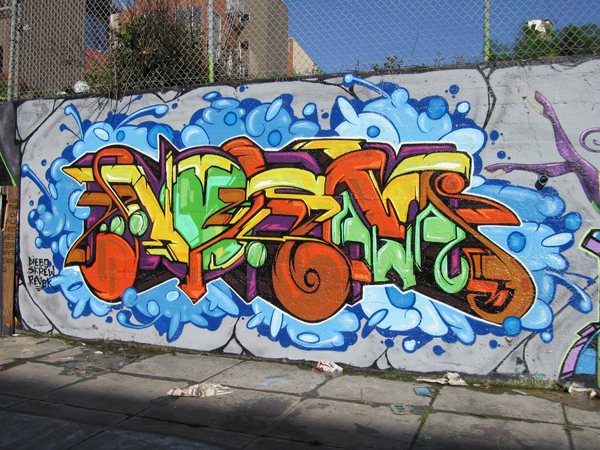 “I MADE MYSELF CRAZY TRYING TO DO [LETTERING] BECAUSE I WANTED TO BE THE BEST. ALWAYS. AS MUCH AS I CAN. TO THE BEST OF MY ABILITIES.”

How you come up with your style and passion for letters?
I think my letter style I guess came from everybody that taught me both from the tattoo world and the graffiti one. It came from all of that because I haven’t had it before.

When I started tattooing and I saw the letters of the best letter tattoo guy, Jack Rudy, that is like god. My favorite letter person.

Did you do any study behind letters?
Lettering is just the shit. Lettering is just amazing so I didn’t study it, I wanted it. There was no study, it was simply going to happen. So I made myself crazy trying to do them because I wanted to be the best. Always. As much as I can. To the best of my abilities. 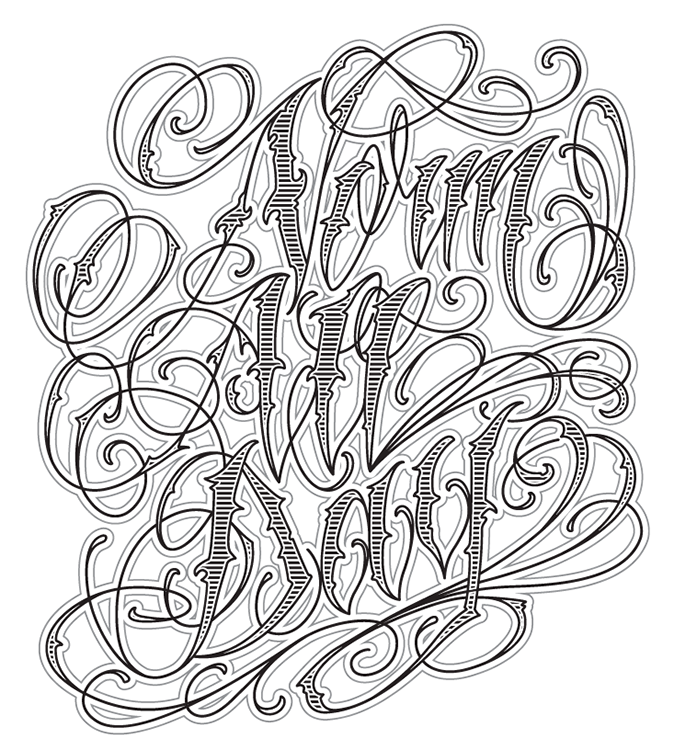 Tell us more about your current job as a tattoo artist.
Well Marcus wasn’t my only teacher. I learned a lot also from Grime and Yutaro. This passion started 9 years ago back then I owned a piercing studio for 12 years but the business was slow.

I didn’t think I could tattoo because I couldn’t draw, but my friend convinced me of the contrary so I give it a try and I liked it. Soon I ended up just wanting to do only letters.

Did you face any big obstacles in your career? Were your parents/girlfriend supportive?
Well, since I was already older when I started, I guess I had less problems especially since I wasn’t giving a shit. Everything was going to happen – simple as that, I had to be a tattoo artist. My parents are the best. They are awesome so I do get “support” from them and I even tattooed my mom. She has a little black rose and my brother has sleeves tattooed by me. He wants more tats but unfortunately I don’t see him that much.

How was the event “We Out Here” and why it was organized?
It was organized because 2SHAE, the other artist, while I was tattooing him in LA, he asked me if I wanted to do a show with him. So I accepted since I do not have enough time for art shows and I like him a lot as an artist and he is a cool person too. We brought and put up all sort of shit at the Seventh Letter Store, like photographs of girls with paintings on them, tattoo machines, watercolor rose paintings. 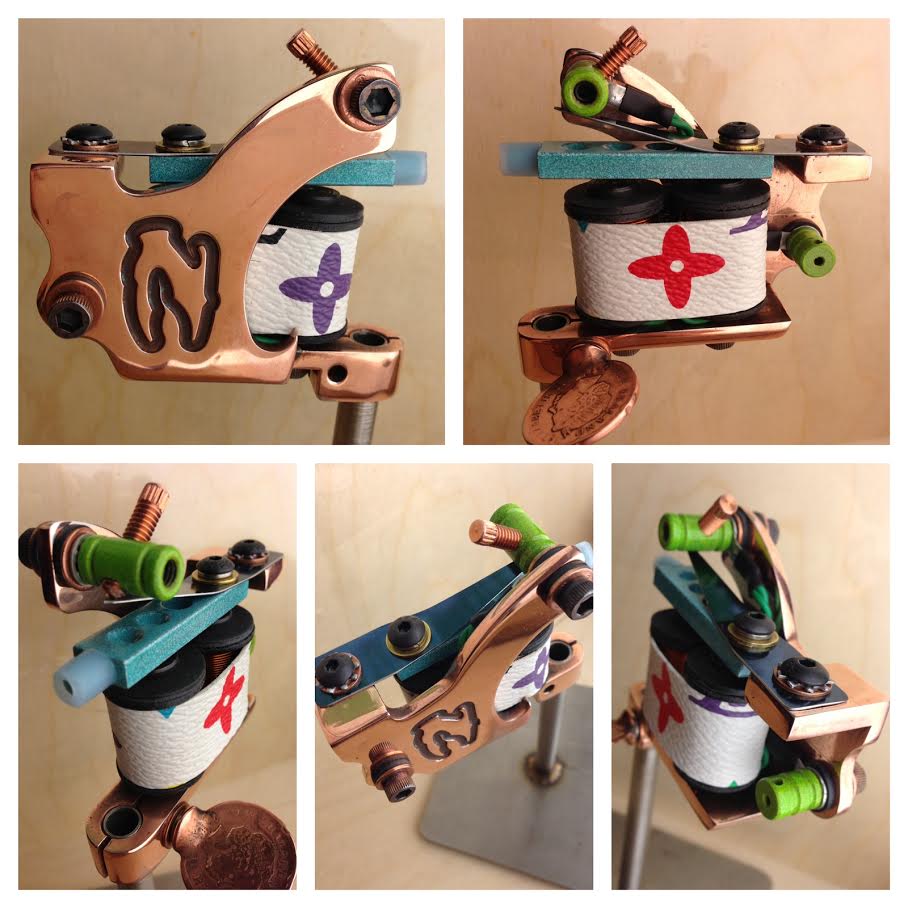 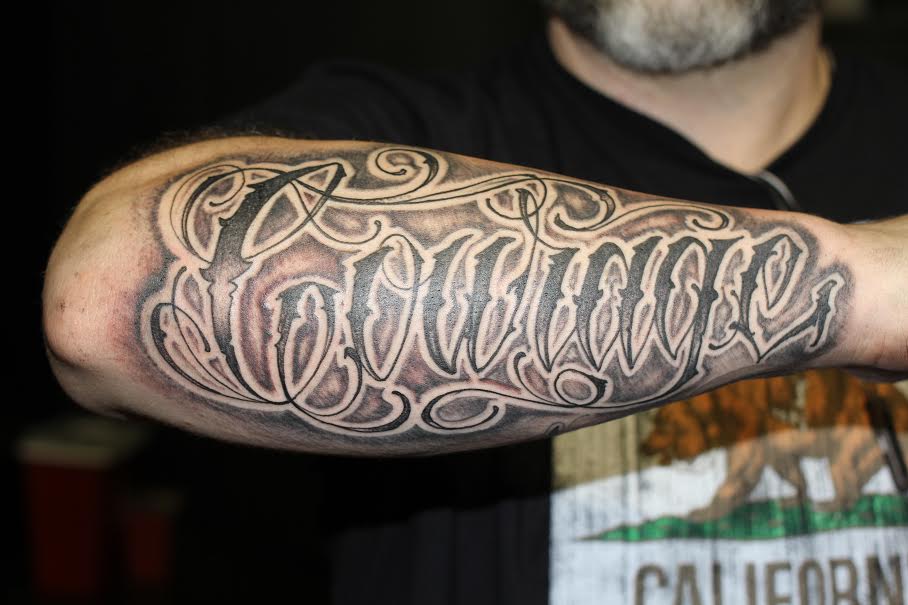 You seem a very energetic person, always doing something. Is it hard for you to keep still?
It’s not hard for me to keep still. It’s just – there is so much fucking shit to do and I wanna do them all, so I don’t give up my free time easily. If I happen to have free time and I could choose to do everything, I’ll probably watch TV and chill out, smoke weed, and relax. But soon, I realize that there is something to do so I jump back on my feet and I will sleep later.

I actually haven’t had a good rest in a while.

How was the 2015 year so far now for you? One big goal you want to achieve?
This year far now was incredibly busy and many changes. About a big goal, it would be learn to say no, and delegate.

Tell us about a story about a graffiti action that didn’t go as planned.
The only graffiti action that doesn’t end as planned is when you end up in jail and I have been in jail many times for graffiti. Once I paid a $100 fine and I spent 4 days in jail in Brooklyn, NY. It happens, but usually I can talk, but sometimes you just get caught. I got caught many, many, many times in San Francisco and went to SF jail many many times. Sometimes you stay locked one day, once I stayed 2 weeks.

Who has influenced you the most in your graffiti life?
Fate, Saber, Revok, Eklips, Push, Krush, and so many people more.

Which other graffiti artists would you like to meet?
I have met so many people – very luckily in my life. So many old graffiti writers and random ones. So I do not know who else is out there.

Are you a true precisionist when you are doing your job?
I try really hard to be the best and do my best. Even if sometimes there is a lot going on – like today at the tattoo convention with a lot going on – and it’s especially hard to be perfect. When you are tattooing somebody’s face in the middle of like 40 people staring or passing by, and talking to me and lifting tattoo machines to see them. I have to keep an eye on them as for many other things. Luckily I got a bunch of eyes everywhere. 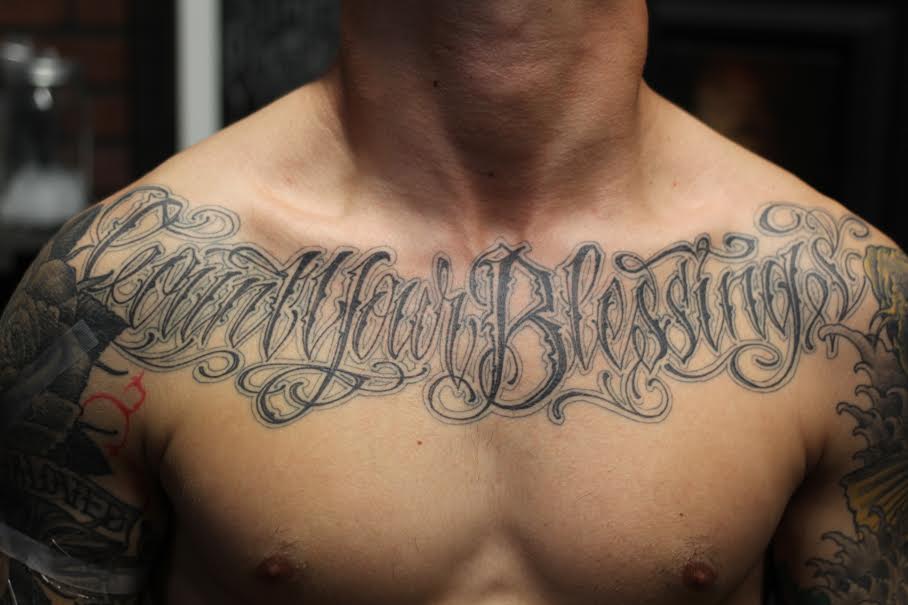 How did you get inside your crews? How does it happen?
Hard work and luck.

How about quality vs quantity?
You need both, but even more you need a quantity of quality.

You still wanna see your name up everywhere?
Yes, but now maybe just selectively, so I do not piss everybody off too much, but everyone else still knows everything is there. You know? I want a nice balance of being able to work and still do my shit while making a living.

Future projects?
Everything and anything.

For more information on appointments and updates, visit NORMWILLRISE.com.

THE LIFE IN A DAY : NORM