Justine Skye is an anomaly that has become the norm in today’s music climate. Amassing a huge following from her cover of Drake’s “Headlines” on her Tumblr account, she’s one of the first artists to break through the social media web into legit stardom. But she’s more than just a Kardashian BFF. Where other personalities have tried—and failed—to capitalize their social media buzz, she has succeeded. With a wisdom well beyond her 21 years, she’s incredibly self-aware of her place—and how she wants to connect with her fans. Her bubbly personality has helped spread her self described “magic” to the world, but she isn’t hiding behind the “gee golly” persona of a pastiche artist who is trying to please everyone. Instead, she exudes a blunt realness that people inside and outside of her Twitter/Instagram/Snapchat comments would appreciate. So as she looks forward to her debut album, which will include buzzing single “U Don’t Know” with prominent Afrobeats artist, Wizkid, the lane seems clear for a newer—more purple—future superstar. I spoke with Justine about spending her childhood around the music industry, her Tumblr success, and why Joanne The Scammer won’t answer her DMs.

I feel like whenever I read anything about you, nobody really asks about certain things. Like your parents are of Jamaican descent, and that’s a really cool thing because you were able to be around a lot of different types of music. How did that structure your influences in music when you were younger?

Justine: I guess in every way, [it was organic].[When I was young], my family would play a lot of reggae. My grandma actually played a lot of country music.

Yeah, [and] I don’t really like country music, but [laughs]. 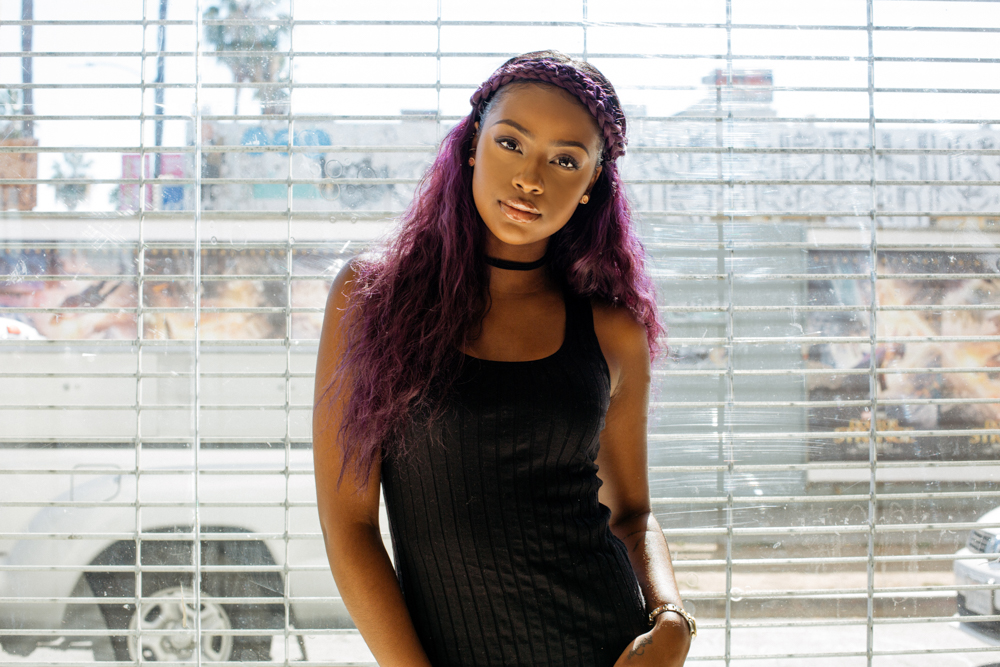 She would play Garth Brooks?

I don’t even know what it was. I was just like, “Turn it off, Grandma. It has to go.” But my mom, she played a lot of neo soul and R&B growing up. I feel like I’m more Jamaican than my actual mother and father [laughs], which is so funny because I could never picture them in the clubs dancing to certain songs and so I just try to erase that whole thought out of my life. So I guess I kind of found it on my own. I just knew I was Jamaican. I knew that this is a part of my culture, and I just went out and explored it on my own.

Yeah, and you also grew up in New York, that’s a huge culture up there.

It’s such a big Caribbean culture.

Were you big in those underground parties back there?

My mom never let me go to any of them. I didn’t really start going outside until I was 18 [laughs].

Was it more of “You can’t go outside, you can’t be a part of that”?

Yeah, she was super protective of me, but I’m glad that she didn’t let me go to all those parties because in Brooklyn there was a bunch of—they weren’t gangs, but they were groups, and everyone click up and you’d be [labeled as] “mixxy” and all this stuff. I wanted to be mixxy so bad. I just wanted to be a part of the mix. And they had like, a list of the mixxiest people. 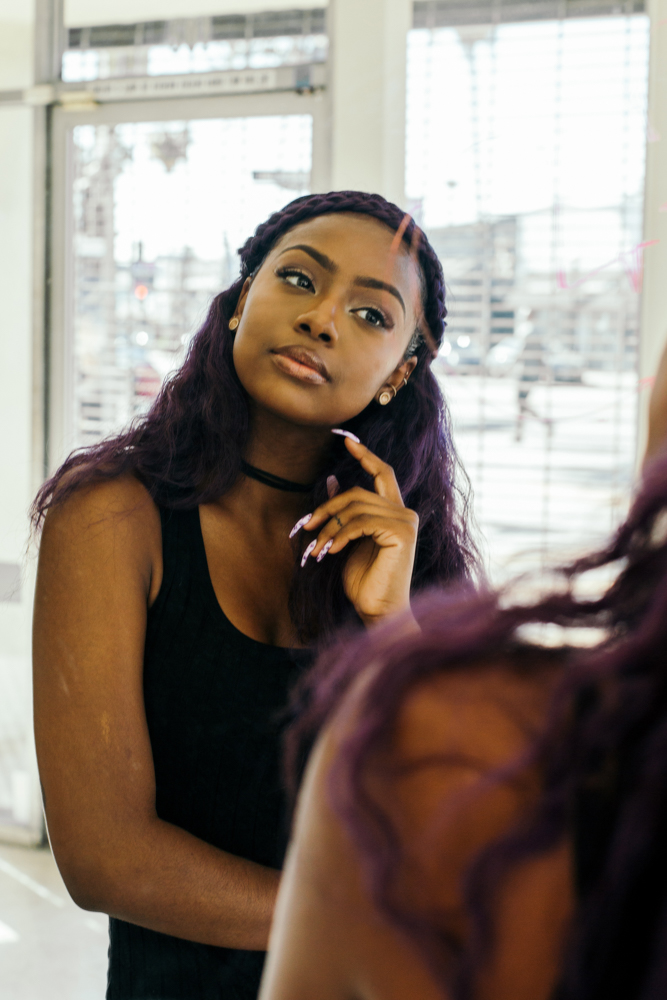 You wanted to be the mixxiest person.

I didn’t even want to be the mixxiest. I just wanted to just be in the mix, but I couldn’t because I never went outside. I was kind of lame. But I was cool, because my mom was the entertainment attorney, so I’d be at all the cool events and things with all these celebrities and stuff, so they were like, “Okay, she’s a little bit cool, but not really.”

So it’s not really like a culture shock for you to be around famous people anymore. You grew up around it.

Yeah, I grew up around it. My mom, she’s been doing this for my whole entire life.

“…they started to be like, ‘Oh, who’s this Justine Skye?’ It’s the same person you said just wasn’t ready.”

Was that kind of like the catalyst that made you feel like, “Okay, I kind of want to get into music”?

Not necessarily. A lot of people would think that it was easy because she’s in the industry, and it’s all about connections. But sometimes when you’re in the industry and your kid wants to get into music, they don’t take it as seriously. Because they’ve known you since you were a little kid, they’ll ask: “Do you really want to do music, or are you just wasting everyone’s time?” I started doing songs at 14, and I went to every major record label you could think of in front of the biggest people you could think of. And they all told me: “No, she can sing. She’s not ready yet. We just don’t see it.” And it wasn’t until I went out on my own and started making YouTube videos and building a fanbase of my own on the Internet that they started to be like, “Oh, who’s this Justine Skye?” It’s the same person you said just wasn’t ready.

Were you thinking, “Okay, I have to focus on Youtube and Tumblr to get an audience”?

It wasn’t about that. I didn’t think like, “Oh, I want followers. I want this.” That wasn’t the thought. I was just being a weirdo on PhotoBooth on my computer, singing songs and making weird videos. Now that I look back through my old Tumblr days, I think, “Why did I think this was okay?”

It’s embarrassing. If I go back to my old Myspace right now, I’m like, “No.”

What? Oh my God, I just found the craziest video of me on Myspace, like no. 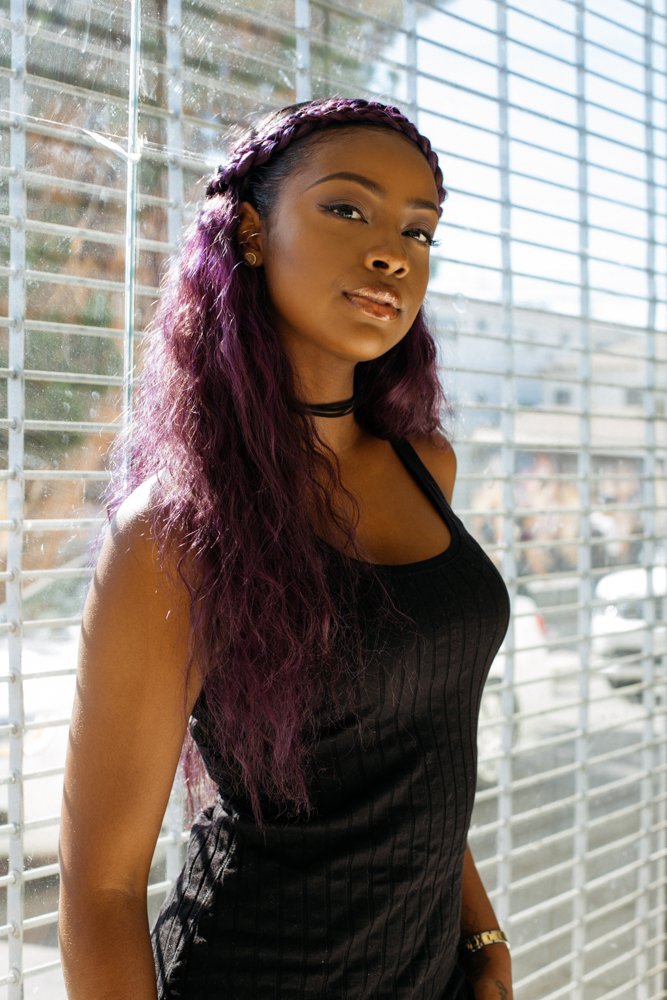 What were you doing?

I did a cover to, I think it was [Ghost Town DJ’s “My Boo”] or something. It was me and my friend re-doing the song to our boos at the time [laughs]. It was just so crazy.

How old were you?

I don’t know [laughs]. I think I was like seventh grade or something. And we recorded it on Garage Band and everything and made a music video. We thought we were so cool.

What was the moment where you said, “Okay, this is kind of catching on. The views are getting bigger. The responses are getting more and more heavier”?

I guess I started realizing that more on Tumblr. As I developed my fanbase on Tumblr, I started to be like, “Oh my” because Instagram wasn’t always around at that time. I remember when it first came out, it was like, “Oh, what does this new thing do?”

Most people don’t even use Tumblr for stuff like that anymore.

It has evolved into people just putting quotes or gifs into posts. And back in the day, nobody knew.

One of my friends in high school at the time told me about it. She was like, “I have 3,000 followers on Tumblr,” and I was said, “Whoa, that’s crazy. What is this?” And I just got into this whole world, and I started meeting people. That was when I started making friends on the Internet [laughs].

Do you feel like you got on it at the right time? Because now it’s probably a lot harder to do that now.

Oh man. It was definitely in the time period of the Tumblr phase. I don’t think there’s Tumblr famous people anymore. No one cares about Tumblr things. Even if you have a really dope blog, you’re not considered Tumblr famous. You’re just considered a person with a dope blog. 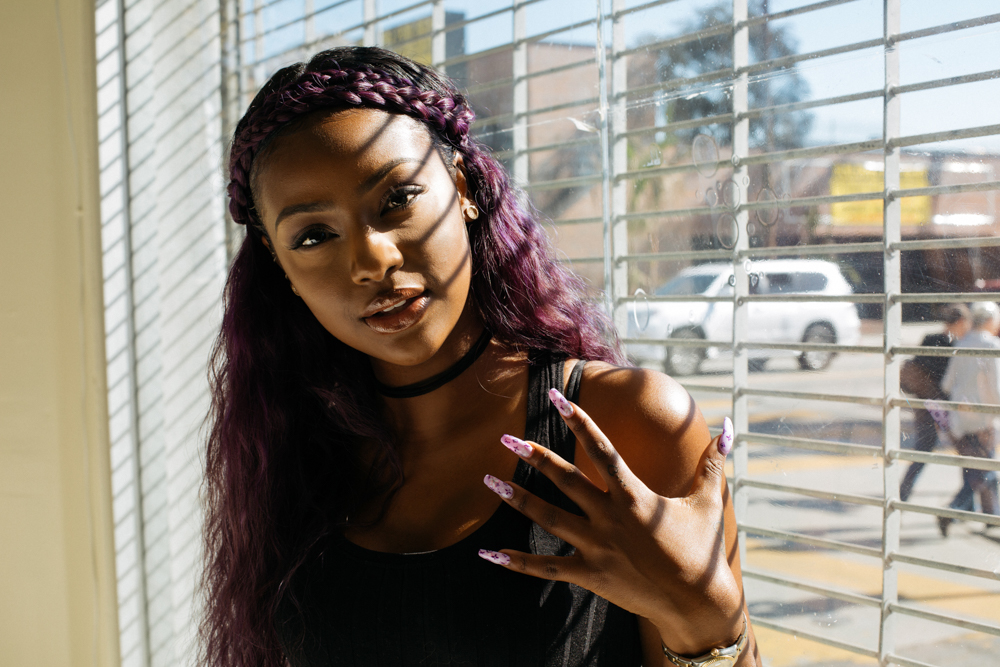 What are some things that you’re trying to focus on more as you prepare your debut album?

I’m definitely trying to focus on doing some more visuals. I feel like I haven’t really gotten the point out there about [who I am]. People know who I am, and they know I sing. It’s so weird, half people know Justine Skye the person, and then half people know Justine Skye the singer. Sometimes they don’t even know that it’s the same person. When I do shows, they’re like, “Oh my God, I didn’t know you sang that song. But I know you!” And I was like, “You don’t know me, girl! But it’s okay. Now you know.”

Do you feel like it’s a lot tougher now because music fans have short attention spans now?

Yes, especially with social media and the power of it, you can just have a hit overnight. Everyone wants a hit, but I just don’t want an overnight hit because those go away. You don’t really build a cult following through that. What I’m doing is building a universal world. 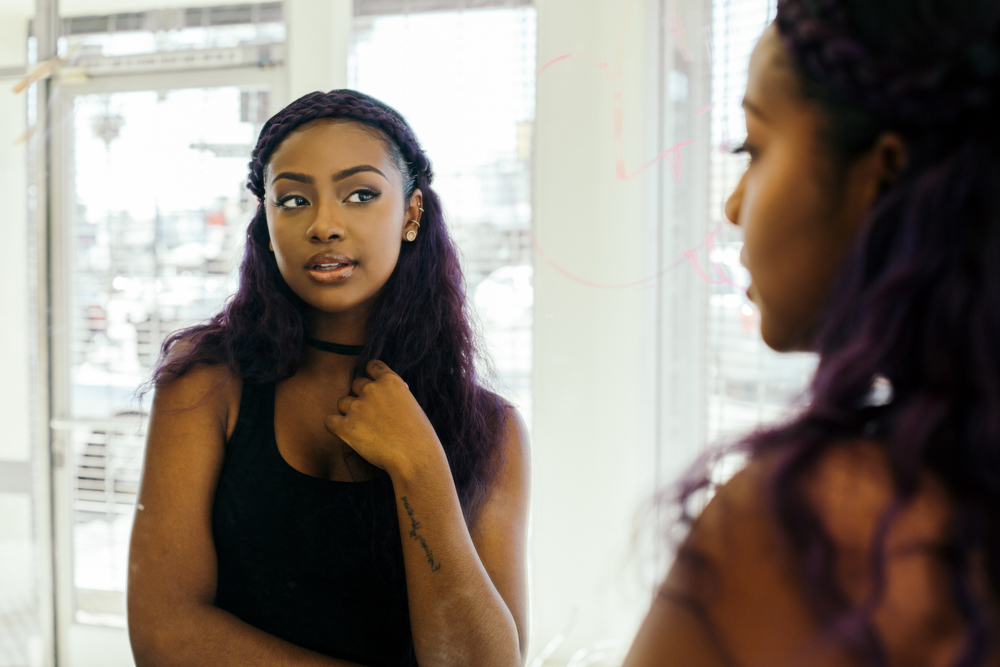 How do you feel about the Caribbean influence in popular music right now? Do you feel like it’s too much or it’s over-saturating itself?

I definitely think it’s where it needs to be. Sometimes it’s a little weird when you turn on the radio and you’re like, “Oh, this person did a reggae song? Cool. Is this what we’re doing now?” At first it was like, “Oh, yeah, I really fuck with this,” and then now it’s just like, “Oh…” 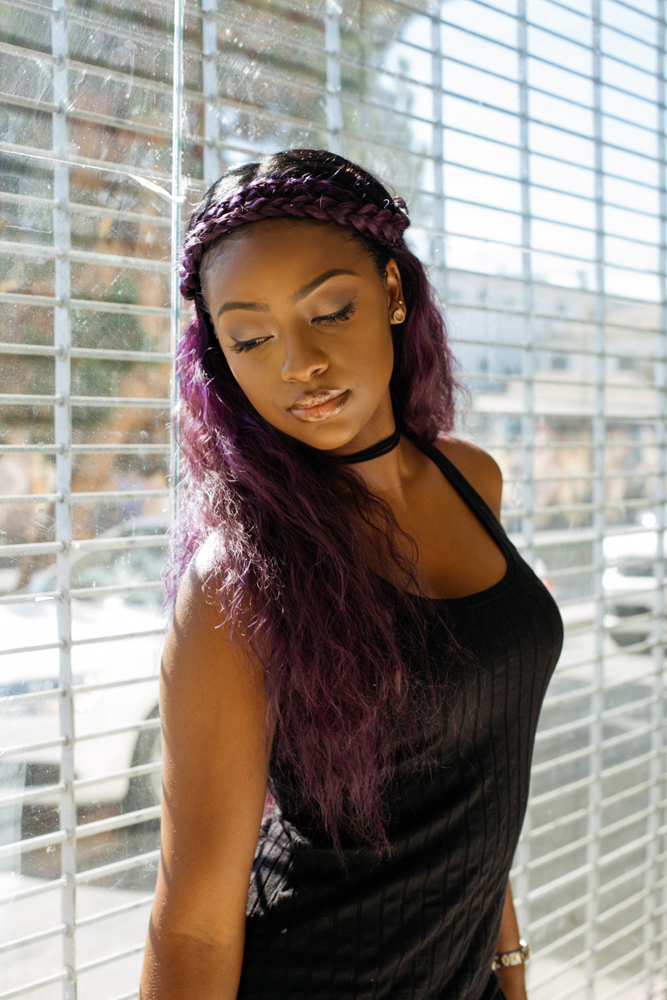 Do you feel like there’s any pressure to outdo the other songs that are adjacent to your single “U Don’t Know”?

No. I definitely didn’t feel like there was anything to worry about. A lot of people do, because they’re just like, “Oh, you’re reggae and this person’s doing reggae and blah, blah, blah.” There’s so many people in the world, and there’s so many actual Caribbean people [that] there can be more than one reggae artist out there. And I’m not a reggae artist, I’m just an artist who happens to be Jamaican.

Who were some people that you would really want to work with, or who you are working with on the album?

I’m working with The-Dream and Tricky Stewart. They’re amazing. We’re going to drop a project soon, before the album. Boi-1da. He’s a dope producer. He has a track, which is a reggae song [laughs].  It’s one of my favorites too, and I sample Joanne the Scammer on it and everything.

Oh wow. I really love that. You should have her in the video.

She won’t respond to my DM’s though.

What? She’s huge. She has a freaking cover story on The FADER.

I know. She DM’d me one time, and she was like, “Hey, girl, let’s go get manicures and pedicures,” and I was like, “Let’s do it.” And then now she just blew up. But you know how it goes [laughs].