Multimedia collage artist Mike Germon finds beauty in chaos and chance encounters, which is part of his whole butterfly thing. “I have this book of old illustrations... it’s all just old-school illustrations of insects and leaves and animals,” the Atlanta native says. “I really liked all the butterflies from there and I used them in a couple of collages years ago, and then I did one installation where [it] was basically a pile of stuff but [with] butterflies in there… I’ve used it a couple of times as an all-over pattern where they’re totally overlapping. There’s no negative space, it’s just [an] absolute field of butterflies.” 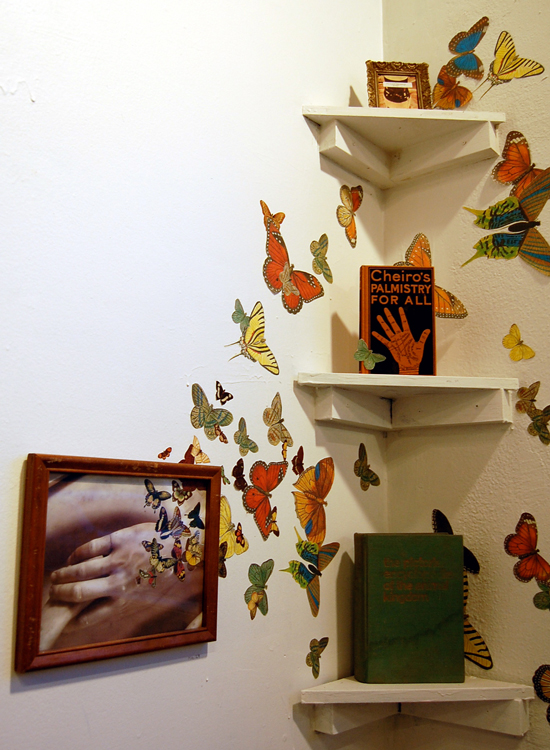 A bulk of his work uses found images, often from old textbooks. “I like to use a lot of old, vintage illustrations. There’s usually a lot of stuff from nature getting mixed with scientific things and religious things. The butterflies are just one aspect of it. I also like it context-wise… A kind of symbol of cause-and-effect.” 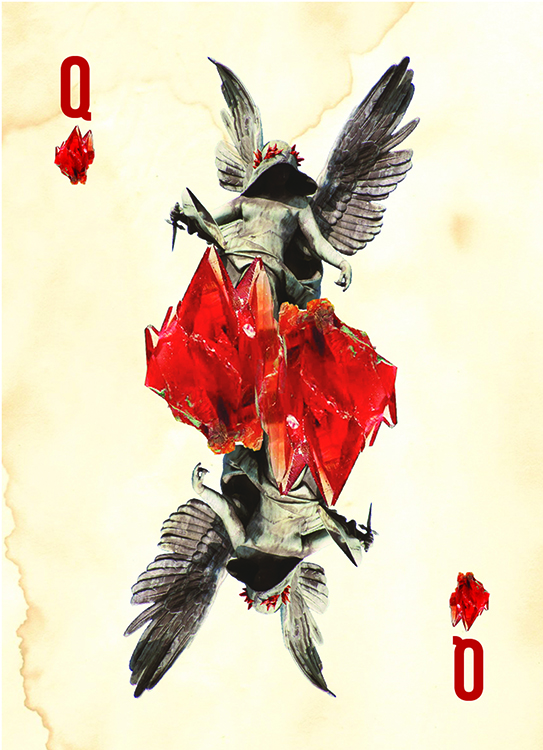 “It’s a good design project,” he says. “There’s standards and a little bit of structure, but there’s also a lot of individual pieces.”

Germon subbed the OG suits with organic images like arrowheads and human hearts. His attention to detail is obvious – each card has a unique wear digitally painted on it, too. 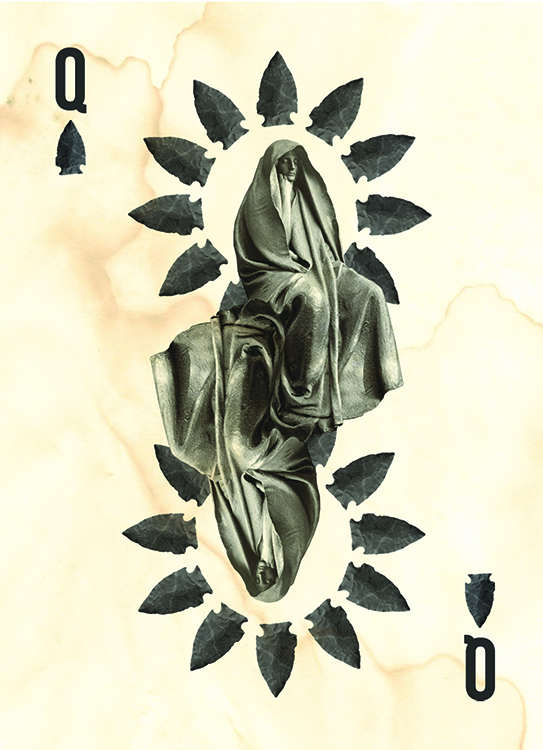 “…I did a lot of research within the history of how [playing cards] started and what people had done before,” he says. “I feel like the structure is just enough to where it is fun to play with and it’s not that limiting. I’ve seen decks of cards where the face cards aren’t even figurative. They could be literally anything. I tried to make them more along the lines of traditional playing cards. The truth of it is as long as you’ve got four suits, and the right ranks, you could do anything.”

He created the deck through digital collage, harvesting images from the Internet to rework and assign new meaning. The face cards feature classical – often religious – sculptures, surrounded by repeated organic images like arrowheads and human hearts to represent suits. So how does he feel about “borrowing” this previously-existing work? 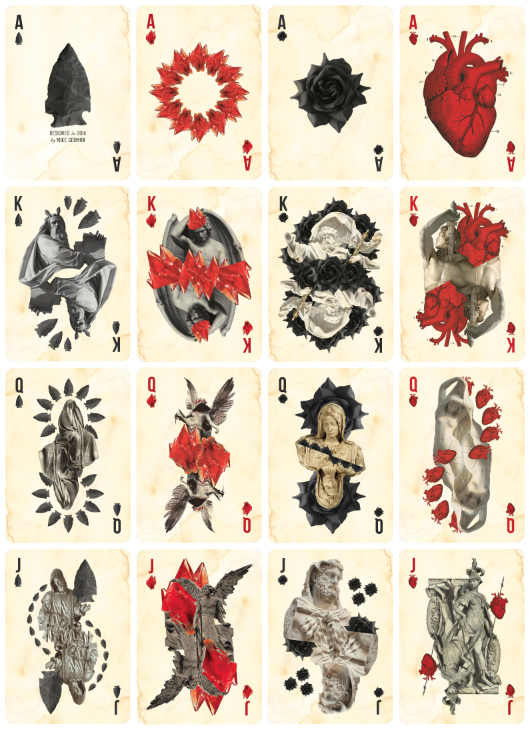 “I’m on board with the whole fair interpretation of fair use,” he says. “Basically being able to use whatever you want as long as you’re altering the meaning and not straight-up benefitting from another artist’s work... so I don’t have any qualms about those things that I use. I know in some people’s eyes, it looks like I’m toeing a dangerous line of infringing on copyrights.”

He cites mash-up DJ Girl Talk’s past arguments for further support and continues: “For one thing, none of those sculptures were on a deck of cards. Is that enough? I don’t know.” 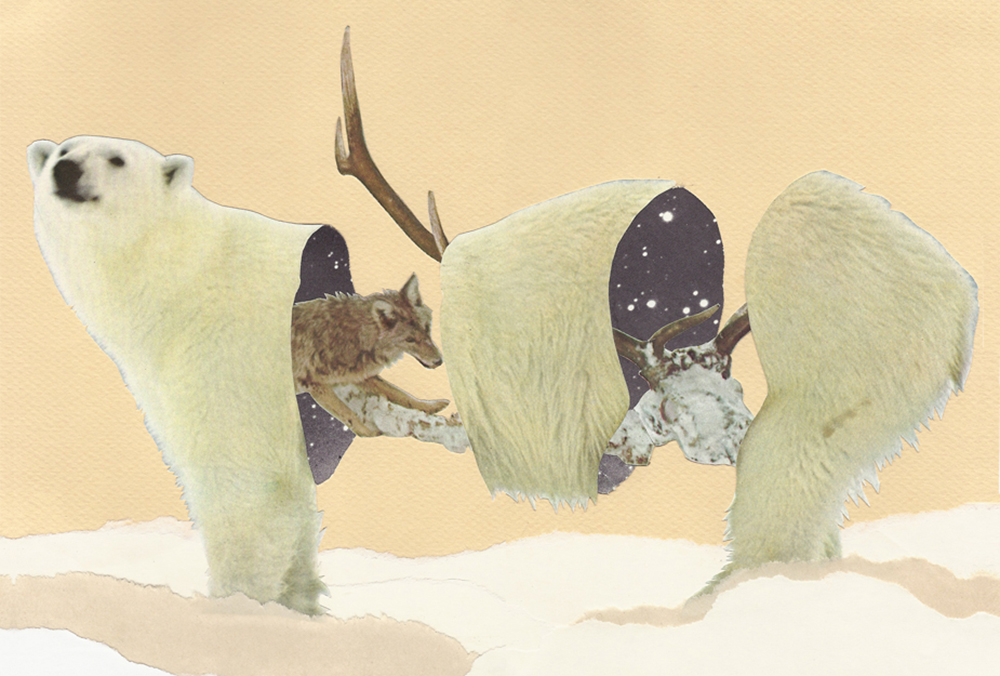 In the meantime, Germon sets his sights high and far from the city he loves – at least one opportunity in particular: “I always had this idea that if an eccentric wealthy person – like if Kanye West was all, ‘I want you to make a sculpture and I’ll pay for however much it costs to make it,'” he says, dopey grin creeping across his face, “I could make something and he would love it. It’d be really crazy. Like, probably a naked woman fighting a lion with some kind of ancient sword. Then there’d be a pyrotechnic element to it. You know? Just something so over-the-top, man. Something insane.” He pauses before laughing and confessing, “I wanna make art for insane rich people.”

You can purchase your own set of “Untitled Playing Cards” here.

The Collage Art Of Jay Riggio