This past December, 24-year-old Oakland rapper Kamaiyah received Pitchfork’s coveted “Best New Track” status for her single “How Does it Feel.” Hip-hop tastemaker Meaghan Garvey wrote that “in a year dominated by paranoid, depressed rap anthems, this beat is pure ecstasy.” After speaking with Kamaiyah—who tells me she wrote the track in 15 minutes—this review couldn’t make more sense. Much like her catchy hit, Kamaiyah is high-spirited, jovial, and incredibly confident. She lacks the cryptic circuity that characterizes so many artists—people who tend to live in their heads or exist on faraway planes. Kamaiyah is refreshingly straight-forward, kind, and self-assured. She’s like your best friend from summer camp who happens to be able to make bangers in 30 seconds.

The de facto leader of Oakland’s Big Money Gang, she also possesses an industry savvy impressive for an independent artist on the rise. When I ask her whether she enjoys performing, she says she’s doing “absolutely no shows” at the moment to prevent “water[ing] down her brand.” On stage, she doesn’t want people to see her as a “regular girl on the street,” but rather: a “superstar.” I spoke with Kamaiyah as she was preparing to release her anxiously-awaited debut A Good Night in the Ghetto, which just premiered today on The FADER, the day after her birthday. Read our conversation below, in which we discuss “How Does it Feel,” Oakland versus San Francisco, Lil Bow Wow, and—wait for it—reading! 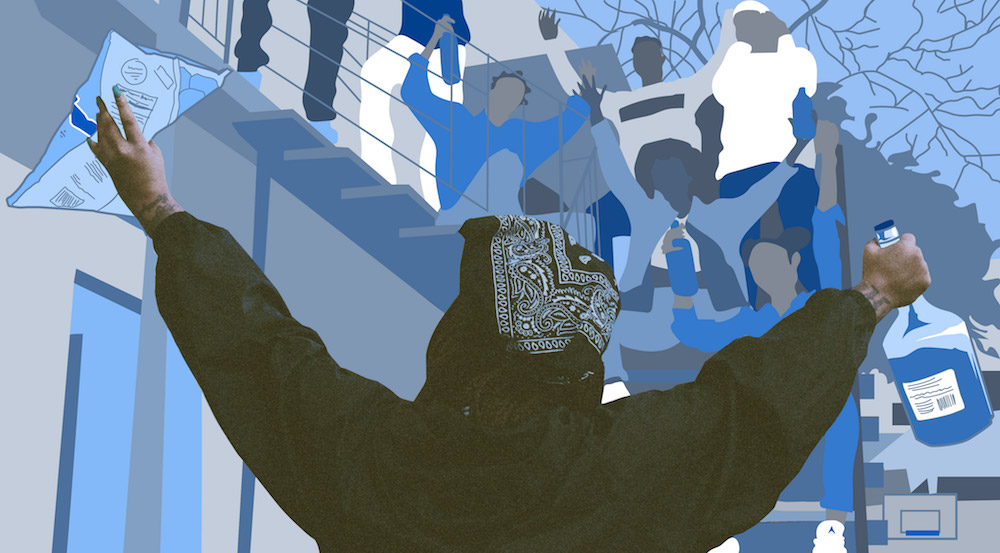 ANNA DORN: I’m loving “How Does it Feel”—can you tell me about making that?
KAMAIYAH: I wrote it in 15 minutes before my studio session. I literally could not think of anything to say. That’s why I’m going aww shit. It’s ironic.

So you had no idea it was going to be such a big thing?
Absolutely not. And that’s what’s crazy. Like the one song I spent the least time with is becoming the most popular. My other stuff is more lyrical but people don’t technically want to hear those records. They prefer the more melodic records versus the lyrical records. It’s kinda crazy to me.

Are you prouder of your more lyrical records?
Absolutely. But I’ve noticed that we’re in a different time now where people don’t technically care for those things. People are more about the melodic tones and the harmonies, not the lyricism.

That must be frustrating.
It’s kinda weird, but I know how to stick it to where it’s both. And that’s how “How Does it Feel” works. Cause at the end of the day it’s melodic, but there’s a message. People received the message.

How would you describe the message?
It was literally just me making it cool to be broke again. And I think it worked. [Laughs]

Did you see that Pitchfork made it a “Best New Track”?
Yes. I actually did an interview with them.

How was that?
It was a pretty cool experience. It’s pretty dope how people are taking to me. I’m not a household name yet. I’m still breaking in. I’m an independent artist on the rise. I think that’s dope.

I saw what you tweeted about being unsigned and urging people not to believe the rumors—what was that about?
People have just started to speculate things and it’s just like not true. I just wanted to clear the air. Like—let that be known, it’s not a situation. Like they’re trying to figure out why all the blogs are all of a sudden picking up on it. Like, they just like me! I don’t know. I’m still trying to figure this shit out myself [laughs].

Are you trying to get signed?
I feel like that’s every artist’s goal, eventually, to sign. Am I rushing the process? No.

That’s smart. How long have you been making music?
Since I was 9 years old. When Bow Wow was a kid, I was a kid. So I kinda thought—if he can rap, I can too. And then I just kinda started writing. And when I figured out I could actually make things rhyme and it made sense, I felt like I was onto something. I just kept going and never stopped.

Tell me about Oakland’s Big Money Gang.
It’s just a group of six of my best guy friends. I’ve been doing music the longest and I kinda influenced my best friends. And we started a group and it just didn’t work out. So we kinda severed it finally, to keep our friendships intact. And now we all do our solo songs. And mine is just the first one to kinda crack off.

You were born in Oakland?
Yes, I was partially raised in Oakland. I went to high school at Hayward High. It’s more multi-cultured—black, white, Samoans, Mexicans, everything, all in one pot. But I grew up on High Street [in Oakland]. Now I live in a subdivision town about an hour and thirty minutes away called Stockton. I moved to Stockton with my grandma in the past 6 or 7 months. My best friend in Oakland has cancer so I stay at his house frequently. I’m at Oakland a lot, but my official address is in Stockton.

Do you record in Oakland?
Now I record at a studio called Faultline in San Francisco.

What do you think of San Francisco versus Oakland?
It’s really about the pace. Oakland is more slow-paced and urban. San Francisco is kind uppity and bougie.

I was always more of a fan of Oakland than San Francisco.
Great to hear that. I like you! [Laughs]

Tell me about your creative process?
Literally, I just hear harmonies and melodies. If someone plays me a beat and I can’t sink into that, I typically won’t write to it. I’ll make my hooks literally in 30 seconds if I like it. And then I write my verses around the hook.

So people will send you beats and you’ll just skip it if you don’t like it?
I’ve literally been making beats with one person for the past seven years.

How did you meet him?
I went to a Youth Center. And he was another kid in the Youth Center who wanted to make music and we kinda just connected. And that dynamic kept our friendship for all these years.

The cover of Kamaiyah’s debut A Good Night in the Ghetto, which premiered today on The FADER. Listen here.

Your Twitter profile picture is Lil’ Kim. Is she one of your biggest influences?
Partially, yes. [Laughs] I just like that picture because she’s just an unbothered bitch. It’s funny because Keke Palmer just tweeted me about that picture literally an hour ago. Like, “this would be your profile picture.” [Laughs]

So you feel her vibe?
Yes. She’s like a diva. Like a hood diva. And that’s kinda me. Like I’m from the hood, but I’m hella bougie. And she’s the same way! [Laughs] She’s like the uppity ghetto person.

Also, I love her music. Hard Core—
—Best album of all time. One of ‘em.

What are your other favorite albums?
CrazySexyCool, One in a Million, Age Ain’t Nothing But a Number, Supa Dupa Fly.

We have pretty much the same favorite albums.
It’s just like girls. [Laughs] All the girl shit. Oh also, Xscape’s Off the Hook. Any TLC album honestly. Except On the TLC Tip. I didn’t like that one.

Do you listen to mostly female artists?
Yes, for the most part. When I’m not making music, I listen to that type of stuff or music from the ‘70s. Like Earth Wind and Fire. The Gap Band. Stuff like that. And that’s how I kinda get the groovy feel to my music.

It seems like you’re surrounded by a lot of men. Do you face any barriers as a woman?
No. It’s actually easier for me. Especially in my situation cause I’m kinda bossy, so I have more say in it. I’m not seen as an outcast, or like my voice isn’t heard or anything. If anything I’m heard the most because they come to me for constructive criticism.

It seems like you’re running it!
Not really technically, but sorta kinda. [Laughs.]

What do you like to do when you aren’t making music?
Literally read books and drink green tea. It’s so awkward, I know. People are like how the fuck do you do that? That’s just my type of thing.

What do you like to read?
I don’t know. I just like to be smarter than other people. I like to know something you don’t. The only way you can do that is if you read books. People don’t read, so why not read?

Do you have a favorite book?
It’s the book that they made Precious out of. Push.

I love that book.
I feel like they watered it down with the movie! They took so much shit out of it! I remember the whole book from the beginning to the end because I read it when I was like eleven.

Wow, that’s young to read that!
Yeah. I literally used to go through the whole school library and read all the books. I read a lot of books.

What are you working on now?
I’m working on a project I’m dropping on my birthday, March 13. It’s a mixtape. “How Does it Feel” and “Out the Bottle” will definitely be on there.

Do you perform in Oakland?
Actually no, because I’m not trying to water down my brand before it becomes a big thing. Right now, I’m doing absolutely no shows. People hate me. [Laughs] People are acting like I’m too good but they don’t understand for branding purposes I don’t want you to look at me like a regular girl from down the street. I want you to look at me like a superstar. If you do the same thing so many times, you lose your value as an artist. And I’m not trying to lose my value so I’m not trying to do shows out here.

So are you practicing now?
I mean we’re definitely getting in the groove of some things that will be announced very soon.

Who is your dream collaboration?
Missy, Lauren, Erykah.

What inspires your music?
It literally depends. It can be like flowers, or something that I go through personally, or somebody else. And I just write a story. Kinda like what Tupac did. Those stories weren’t technically about him, but if he saw something he felt like needed to be preached about, he’d make a story. That’s kinda like what I do essentially.

Where do you see yourself in 5 years?
Being the top female artist of this decade.

Follow Kamaiyah on Twitter @itskamaiyah. Listen to A Good Night in the Ghetto exclusively on The FADER right now. She’ll also be performing this Thursday at SXSW at FADER FORT.

The Progression of Mr. Muthafuckin' eXquire

Life in the Time of Ohana Bam