CHOP IT UP :: Interview with 4Q's endlessly interesting Max Schaaf

I few weeks ago I had the chance to spend the afternoon with Max Schaaf. Along with being a professional vert skater (Real, Fourstar) and building/rebuilding choppers, Max is a pretty entertaining and awesome dude. Being thoroughly impressed by his bikes and garage, I started shooting photos while listening to too many amazing stories. The afternoon was filled with so much good shit, I felt the need to share and ask Max a few questions. 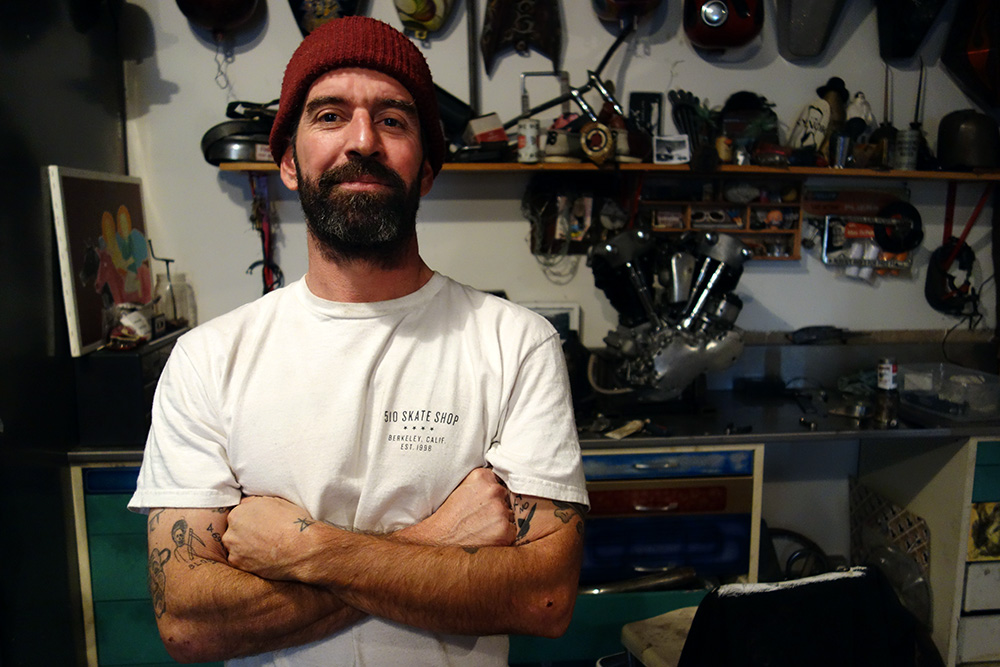 AARON NARDI: What sparked your interest in choppers?
MAX SCHAAF: I guess just being a boy that became a man that has always been attracted to noisy machines and danger. They’re stripped down and have a sexy look, but are tough and can kill you.

Love it! Describe the first time you rode a chopper?
The first time I rode a chopper was with J Jesse from Santa Cruz. We rode to the motorcycles races in Watsonville. It was his friend Job’s panhead chopper, [which] was completely insane and amazing, so I was kind of in awe that I was even being allowed to ride it. With a borrowed Carhartt jacket and ’50s panhead, we headed south. It was easier than I thought to ride – completely surreal, and I never wanted that moment to stop. We were late, never even entered the races, and just watched through a chain link fence.

We went to leave and Jason kicked the bike to life for me and BOOM! The bike caught fire. Like really caught on fire. Jason just kind of stood there with a funny shocked look on his face. I ripped off the borrowed jacket and tried to smoother the flame; as soon as I pulled the jacket off, the fire just got bigger. I ran for water to throw it on there, and once again… more fire.

Finally some old man ran up with a fire extinguisher and shot that white powder all over the bike, which worked quickly, and as quick as the fire ignited, it was out. The bike looked terrible and I felt like puking. Jason just kept the same expression on his face the whole time. Another old man walked by as Jason fiddled with some burnt wires and said, “Panhead, tough old bitches, it’ll start.” In my head it was roached, and I’d most likely be paying for a tow truck to get it home.

Jason got it started, told me to get on it and we rode 2 blocks to a carwash and hosed the bike off. Surprisingly, it cleaned up pretty good. Me on the other hand had a Carhartt jacket on covered in burnt holes and white powder. We headed out into the street, bike dripping wet, I gassed the bike and slid across the street, barely avoiding crashing. I remember looking at Jason, like, “Fuck man, I’m sorry,” and he smiled and said, “It looks like your meth lab just exploded.”I drove my truck home that night, just kind of in shock. The following day, I bought Jason a new jacket. 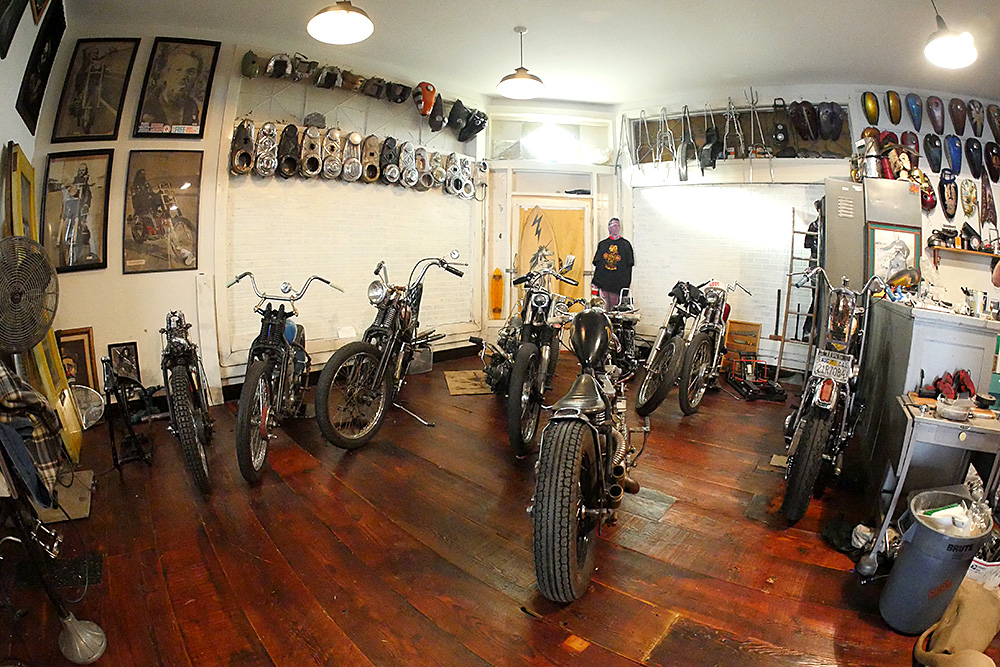 Amazing introduction. So after your first few experiences, did you ever imagine choppers would become this big a part of your life?
No, not at all. I just wanted an old truck and a chopper and thought, when I get those things, I’ll be done. I grew as a kid with not a lot of stuff, so at the time I had simple goals. 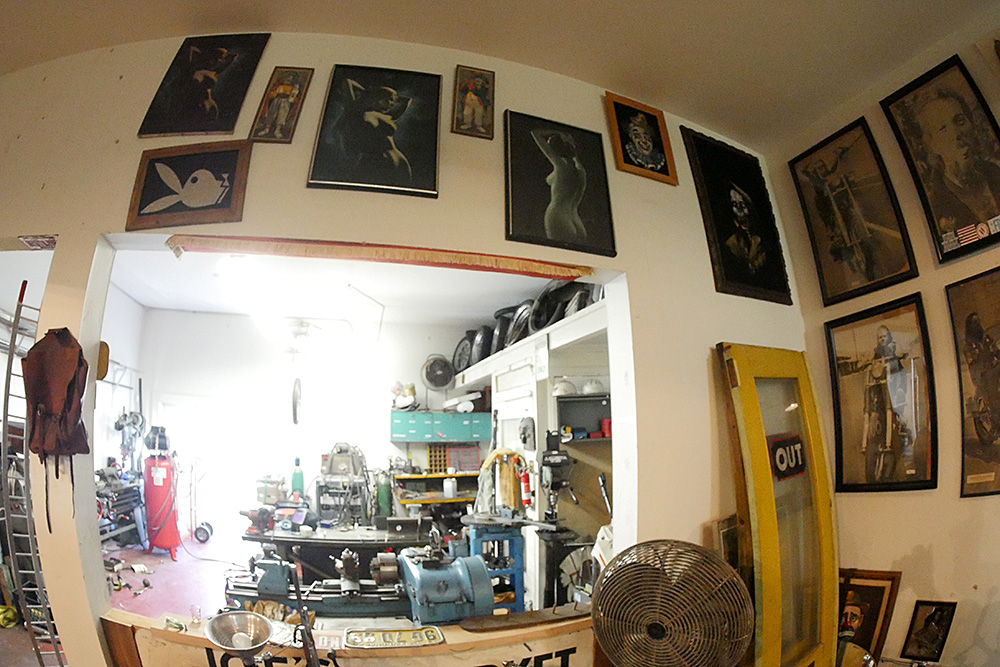 Your shop is filled with tools for not just putting pieces together but actually modifying and fabricating as well. How did you learn to actually build or create bikes?
In my late 20s, I took a lot of night school [classes], random stuff: Mechanics, welding, and auto body and paint. There was a teacher there that really treated me good, and made things easy to understand. Then I got a job at a wood shop, next to a metal fabrication shop, and met this dude Dave that took a lot of the mystery out of how things are made. He taught me a lot and wanted no glory for it. I owe him so much, and though we don’t work on things together anymore, I have so much respect for him. The more you pay people to do little things, the more you figure out how to do things yourself, and the more tools you end up with and it just goes from there.

So once you got into the building of bikes, how long before you decided to start 4Q?
I guess the day I put 4Q on the side of my Knucklehead, there was no plan, it just happened. So I was already building stuff, but then it just became 4Q.

How would you describe 4Q?
Well, it’s just me; I’d like it to always remain more of a motorcycle thing than clothing thing. It was really just to show my take on things. 4Q [is a] fuck you to the biker doo-rag, Jack Daniels bottle shift knob, spike hair bandana jock – joiner. I think at one time in the ’60s, lots of bikers were eccentric weirdos that didn’t mesh well with the rest of society; their bikes were a part of their personal expression and represented some image of freedom. I like that as an ideal, but the popularity of anything kind of homogenizes it. So to me, 4Q is for the individuals, the people that like to be creative and express themselves, that can be passive and observe as well as stand up and fight for the things they believe in. 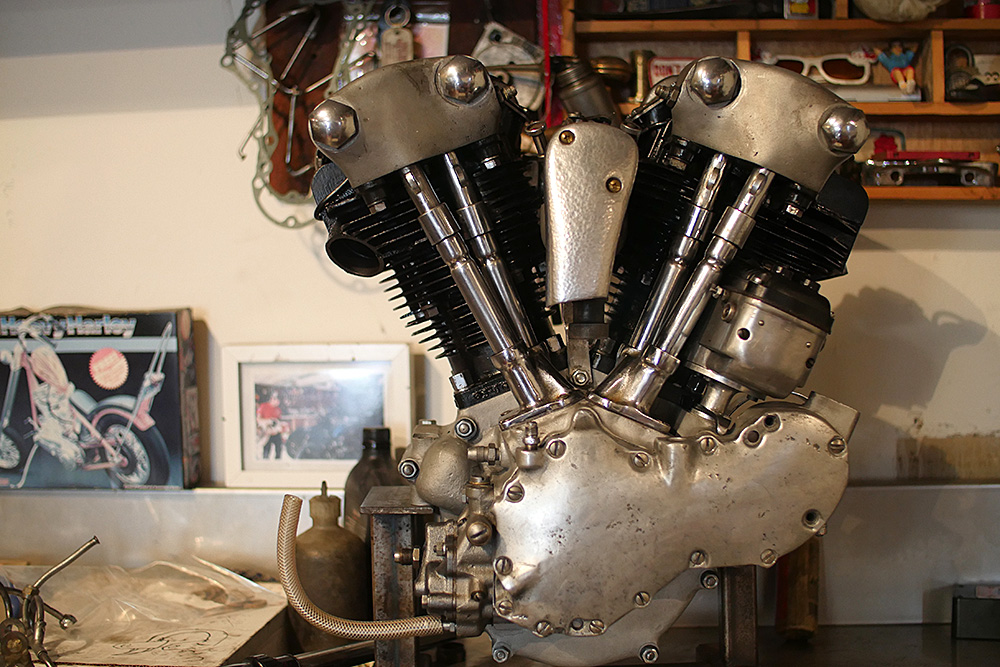 I like that while you have fans and followers, you haven’t really tried to awkwardly commercialize 4Q or yourself and kept everything pretty organic. Is that a conscious effort?
Yeah, I like to make stuff in limited batches. It’s not numbered or anything – it just might be a new color or design and usually then it kind of holds a date and authenticity of its own. I know “streetwear” is a huge market, and I’ve seen it push into the chopper world, but it usually reads kind of false and fake and I try to avoid that. 4Q is my street, and I kind of like that it doesn’t have a ton of traffic on it. 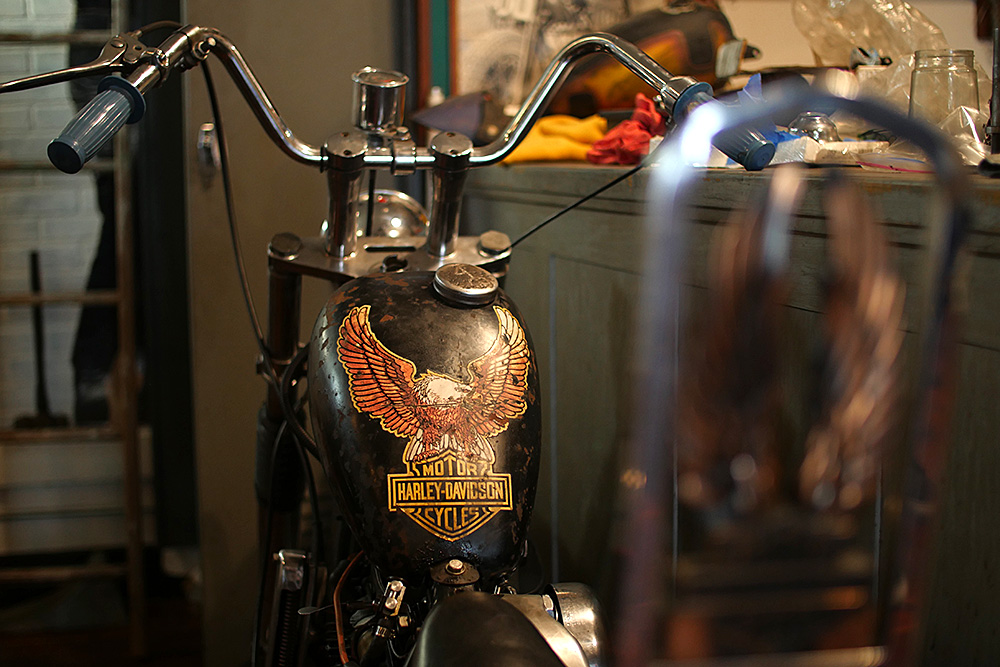 Well put. So when you’re building a bike, do you have a solid idea of what the finished product will look like or does it evolve as you go?
Yeah, both man, sometimes you have some mistake that actually looks really good and you learn from it. Or a well-thought out idea ends up looking forced and you have to step back and tone it down. It’s pretty organic usually.

Sounds like most artist pursuits. What makes a bike stand out to you?
Just clean lines and a good stance – not too many tricks or too “money bumps” on it. I think some people are consistently building cohesive bikes that have a good feel. Others follow every new trend and that shows too. It’s a balance just like most creative endeavors. 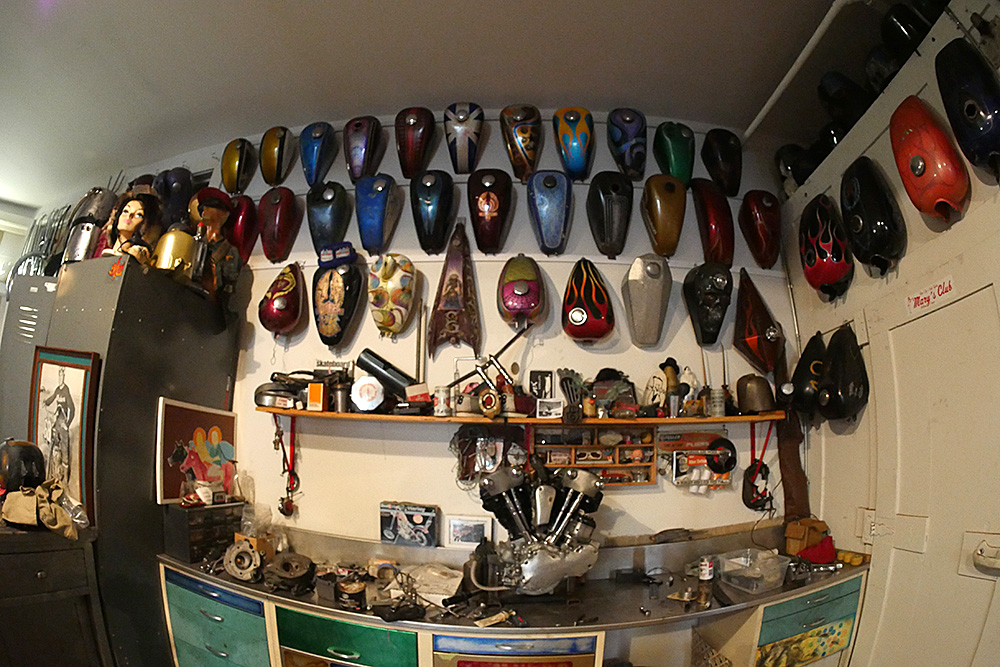 Your shop has a pretty distinct and rad vibe.
Thanks, I hope so, I felt like I was losing my mind setting up my new shop. I always want it to be like part-inspiring museum, part-practical shop. 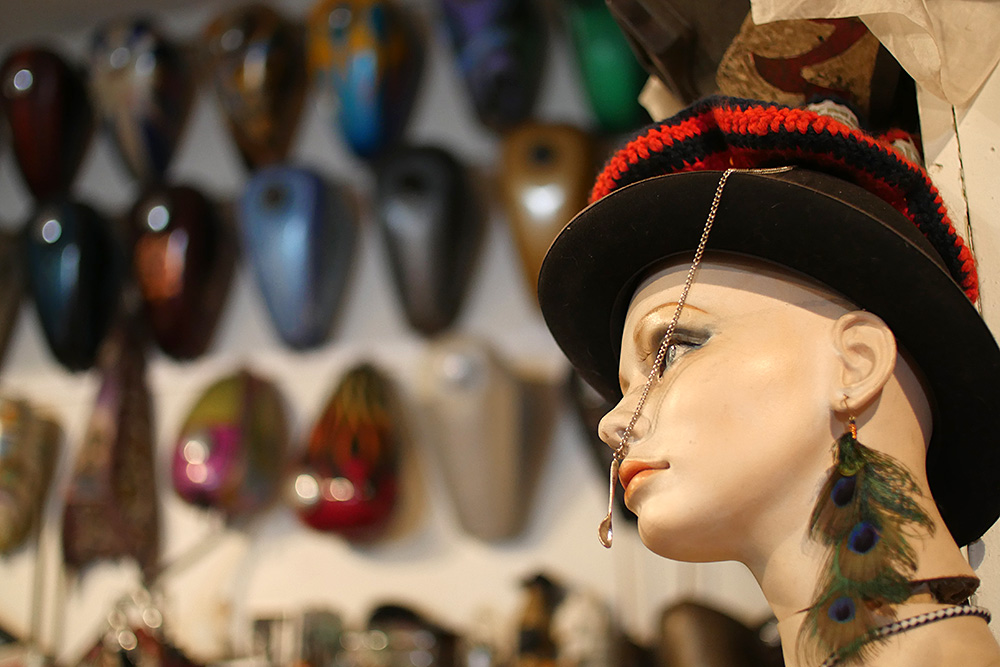 I remember a funny story about the floor.
Yeah, it’s some reclaimed old barn wood milled for flooring. It’s glued to the cement – it was a complete pain to lay down. When it was fished and sanded, I still needed to stain it. I was an overworked wreck, and my mom stopped by to see me and saw I needed some help.

We poured this toxic varnish all over it and proceeded to brush it on. We both started feeling really weird, she ran outside and couldn’t tell that what she was looking at was just a tree, my heart was pounding so loud I couldn’t hear anything else. I was already tripping balls so I figured I’d quickly try to finish it, she helped too. We gave it one last blast and then ran back outside. Both of us were completely gone at this time.

Take note my mom is 65, but has also done every drug imaginable. At this point, she gives me a hug and says she wants to go home. When I looked down my short driveway, it looked really long, and was kind of pulsating. Right then, what appeared to be three Grim Reapers walked by, staring right at us. My mom and I looked at each other speechless for a moment… Then it hit me. I said to my mom, “Fuck, it’s Halloween.” We both kind of laughed and went on our ways. It was pretty insane, that feeling lasted a couple more hours. Yay! Hallucinating with Mom. 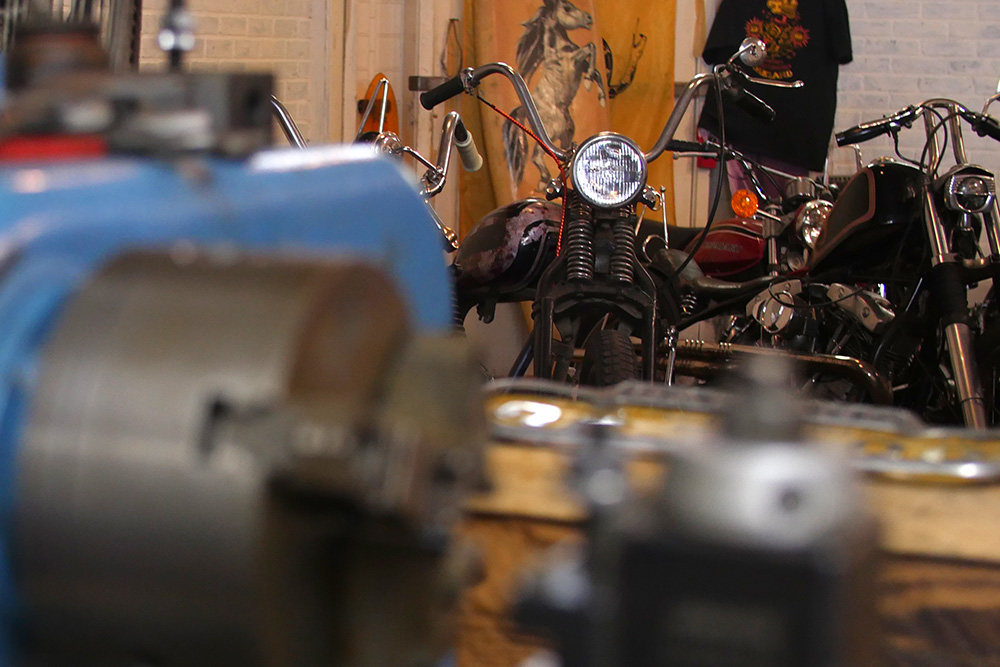 I love that your house while distinctly different is a great reflection of what’s going on in the shop. It’s kind of kitschy and random but also feels inspired and classic. Does that attention to detail run through everything in your life?
Yeah, man, like I said earlier, I grew up with out a lot of things – like I always had a used bike and hand me downs. So when I got my place I wanted to fill it up with all stuff I dig, lots of it found at swap meets and thrift stores. I like random, used, and vintage. I’ve never been to an IKEA; in fact their building in Oakland blocked a really classic view of the Bay. I think that’s symbolic. 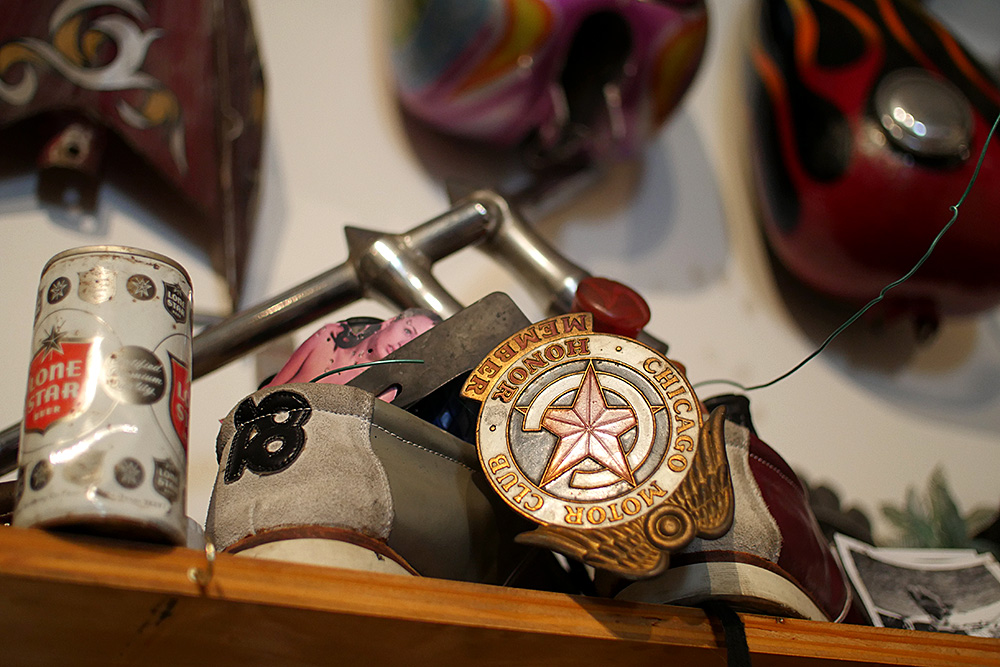 Has years living a life as a skater influenced your style with choppers?
Sure, I think skaters have a unique eye, I believe we look at things in a different way. I think skaters are very critical and we learn young how important style is.

I feel like vert used to be an integral part of skateboarding and skate culture but now it seems to be viewed more like a distant cousin or something. What’s the current state of vert like?
You know, I think it’s very valid right now, especially with these all terrain skaters like Grant Taylor and Ronnie Sandoval. It’s a truly amazing activity. Unfortunately, it got robotic and mega and farther from the average dude. But it’s coming back and if it doesn’t, who cares. Those that know – know.

What was the vert scene like when at its prime?
I don’t know… ’cause that was probably 1985 and I was a kid.

Ha, well how about the ’90s, vert was still huge.
’90s vert was cool because it got technical and the lip of the ramp got manipulated. I think foot placement and style became bigger factors. It defininlty weeded out a lot of goons.

What do you think led to the disconnect and was it a surprise or did you see it coming?
It’s like anything. It becomes too popular and blown out, egos get big and people become ungrounded and it becomes a Mervyns commercial. I see it in street skating too, more around 2010, you know handrails, step counting, and hammers – party overlaid, cartoon character rock star bullshit. It’s funny, and those people have to live up to their past, and we get to go skate.

You’re a pretty good storyteller and write a bit, where can people hear more of these awesome stories?
Thanks man. Please check out 4qconditioning.blogspot.com

What does the future hold for you for both skating and 4Q?
I’m not sure. Just keep doing my thing. I used to plan for the future too much and it took a lot of fun out of the moment. So I’m a little more day-by-day now. Hope my mind and body hold up and I can keep making stuff and skating. Life is short and precious. Thanks for going me a shout and this opportunity to ramble. 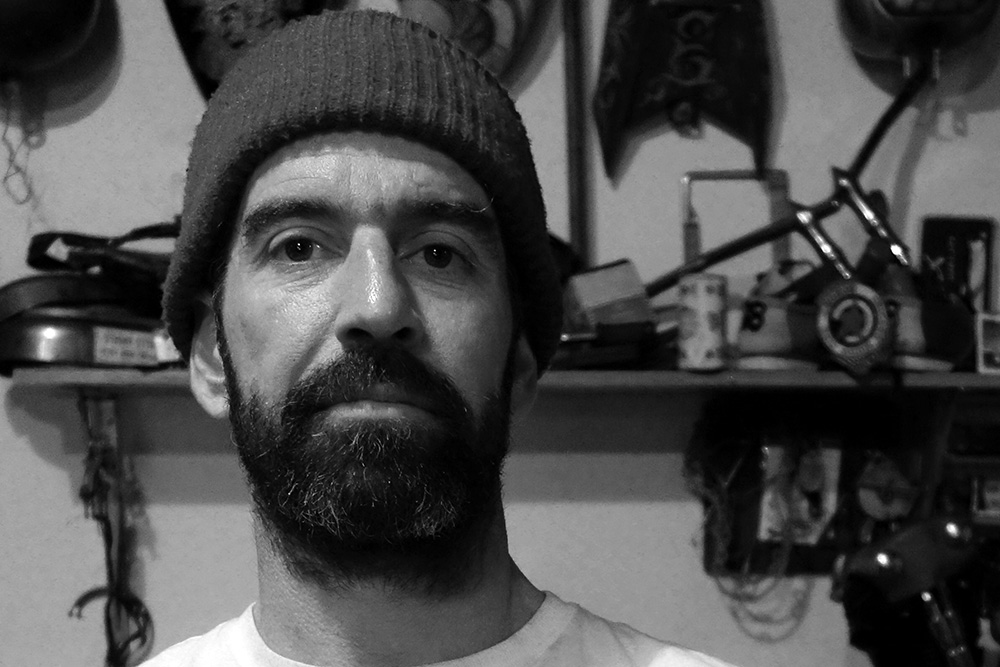 A LOOK INTO SHACKMAN, AN INDEPENDENT BOUTIQUE IN KOBE, JAPAN