A sacrificial lamb is a ritual based off of an ancient religion for killing an animal for the common good.  This has been translated over and over in many different cultures, like in the South where a lot of counties are privy to using the whole hog, and in Mexico, where many families will sacrifice a goat.  But whether it’s for sacrifice or not, the commonality rises out of the cooking process. People come together and cooperate to get the end product, which for us, was sweet, gamey, juicy, delicious lamb meat tacos at The Hundreds Homebase. We celebrated the way The Hundreds does every First Friday of the month, with a feast. 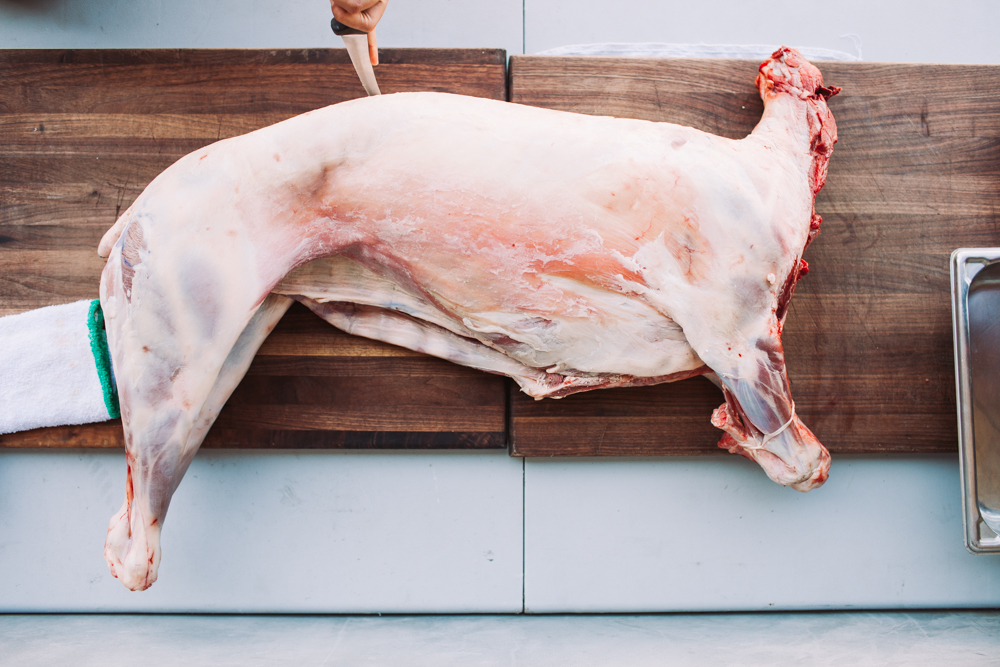 Not quite sure how this all came about – the lamb spit, later the candlelit linen tables cleverly staged in the parking lot of the Homebase, with surreal Beatles mash ups by DJ Money Mark – but I know it started with my friend Alia. 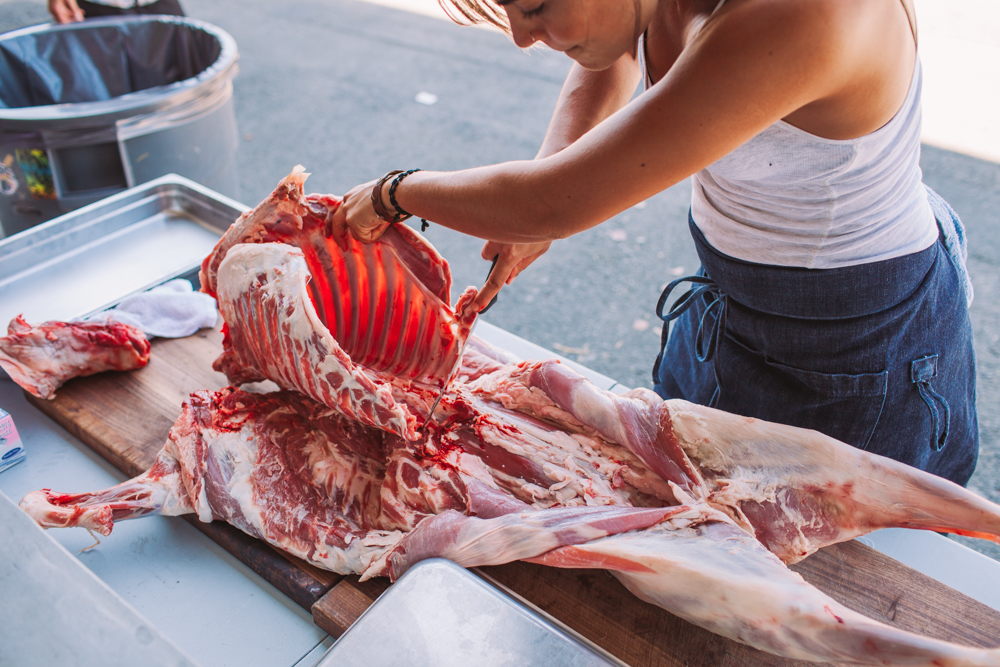 Alia and I had worked on catering events before. She is an enthusiastic ball of energy that has a love for food and a killer knack for breaking down whole animals, as she was a butcher at one of Los Angeles’s premier Italian restaurants Bestia.

Recently leaving the restaurant to do special projects has led to Alia traveling in and out of international food festivals and cooking with other chefs. I was lucky enough to be able to lock her down for a day of butchery.

I thought it would be really cool to get a badass chick with knife in front of an animal. 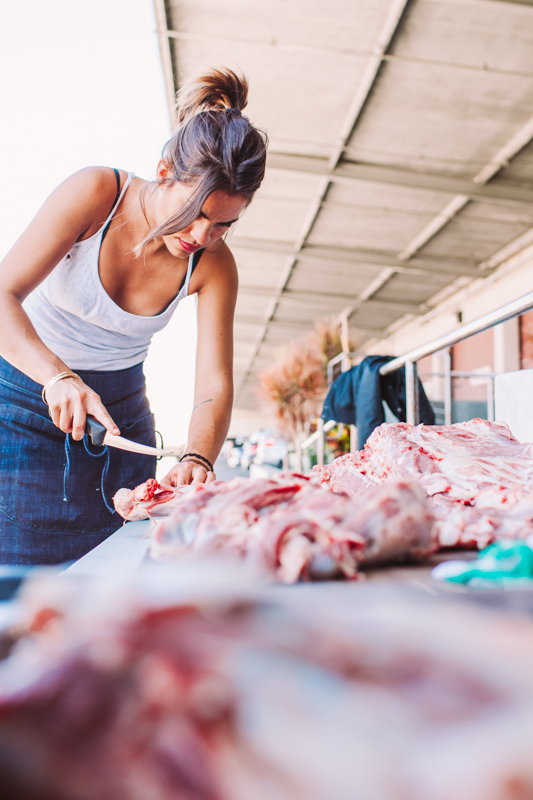 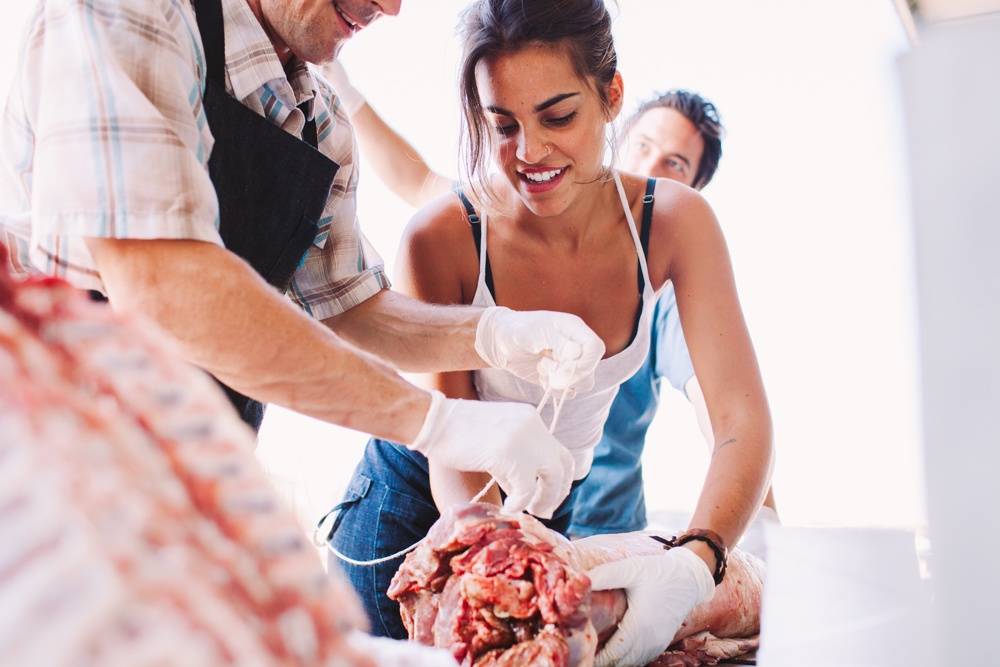 At first we were going to just butcher a lamb, but why show her butcher it and not eat it?!

So we decided to make a lambchetta, which is lamb prepared in the same slow roast fashion as pork – deboned, stuffed with tasty ingredients, tied up, and stuck through with a metal rod to be rotated above a fire of smoldering almond wood for 4 hours! 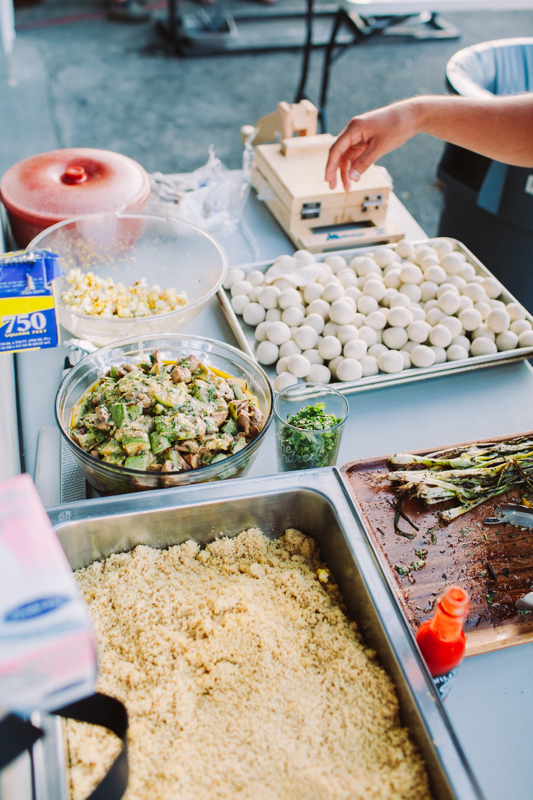 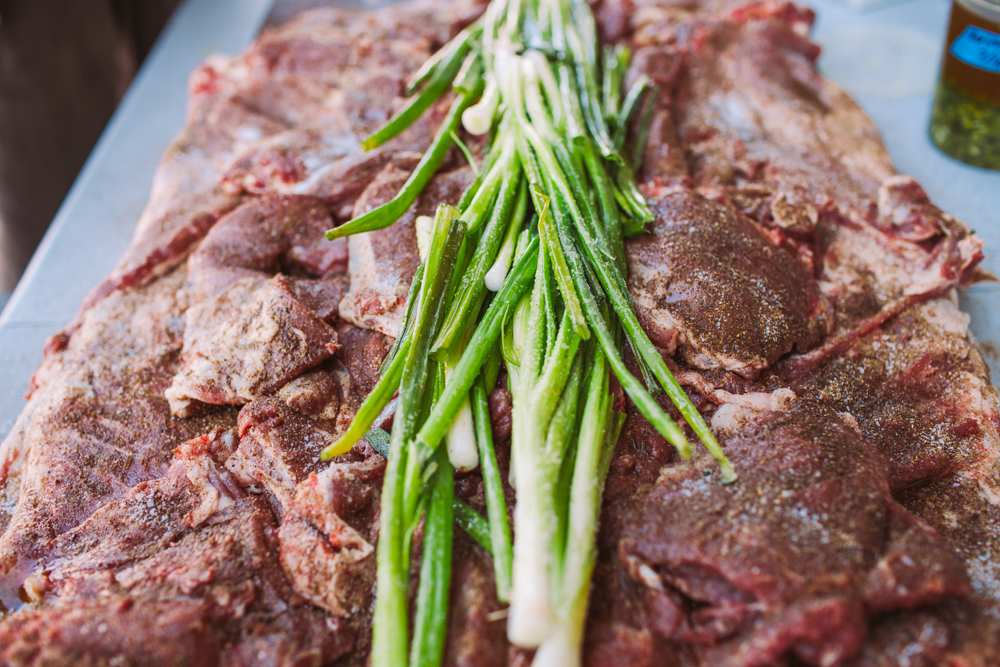 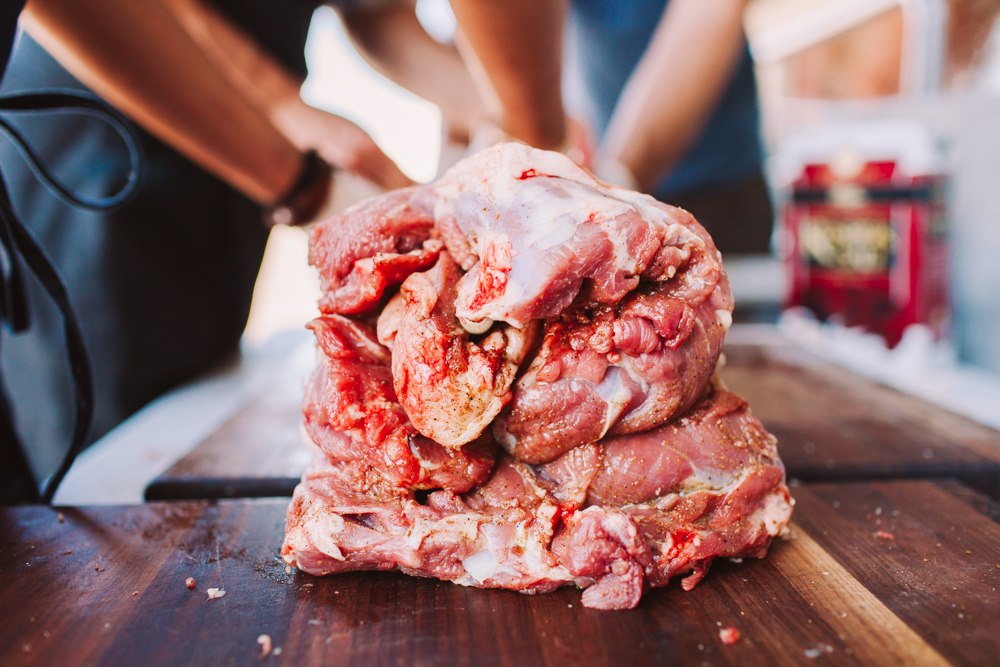 The crafty chefs and owners of Willy B’s hot sauce aided with a custom spit and an entourage of hot sauces to douse on the meat. You can read my interview with the guys behind Willy B’s here.

I came with an electric griddle and tortilla press to make tortilla, but we soon discovered that the griddle couldn’t plug in, so we rushed out and bought a griddle plate at the local Superior market and put it directly over the flame! 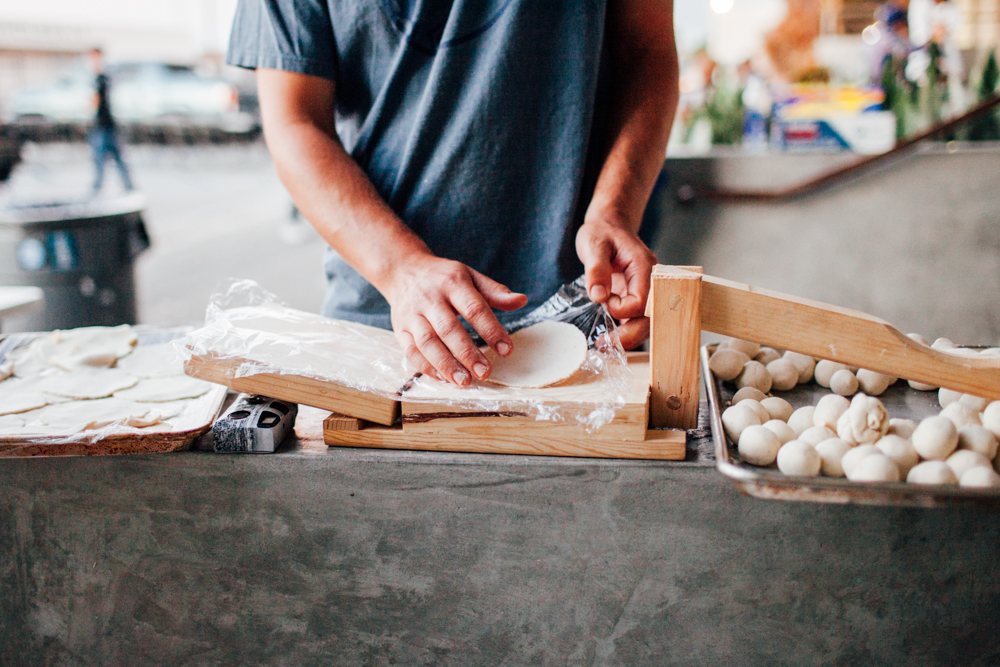 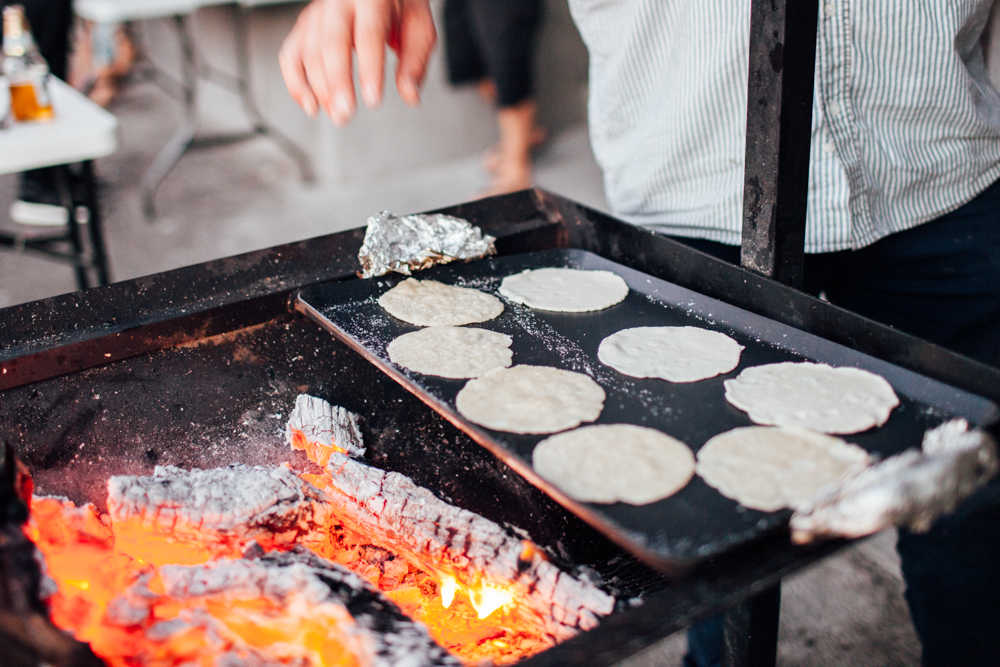 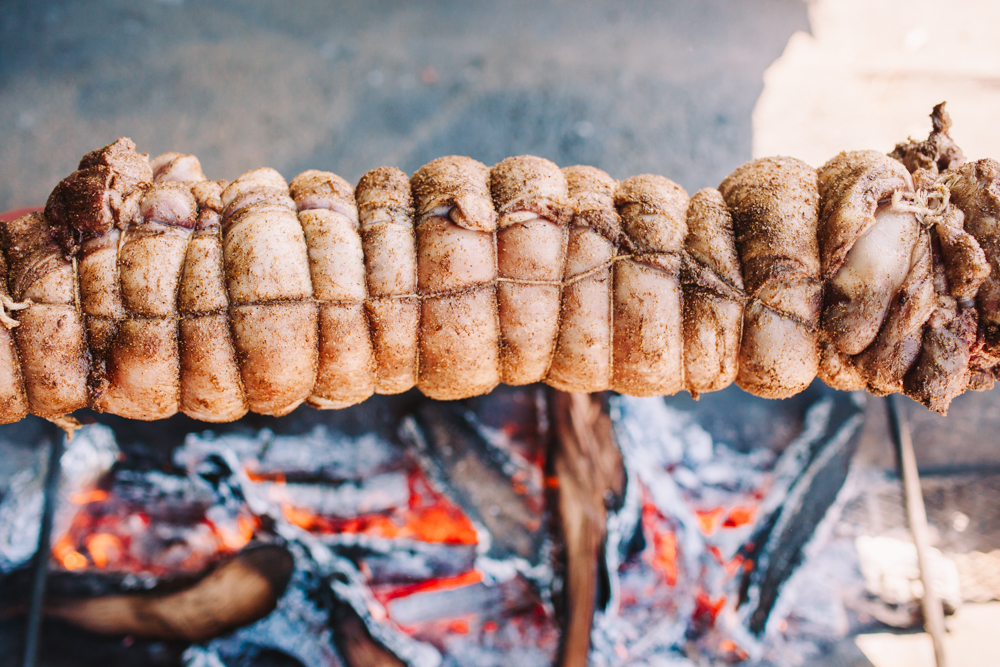 4 hours on the spit! 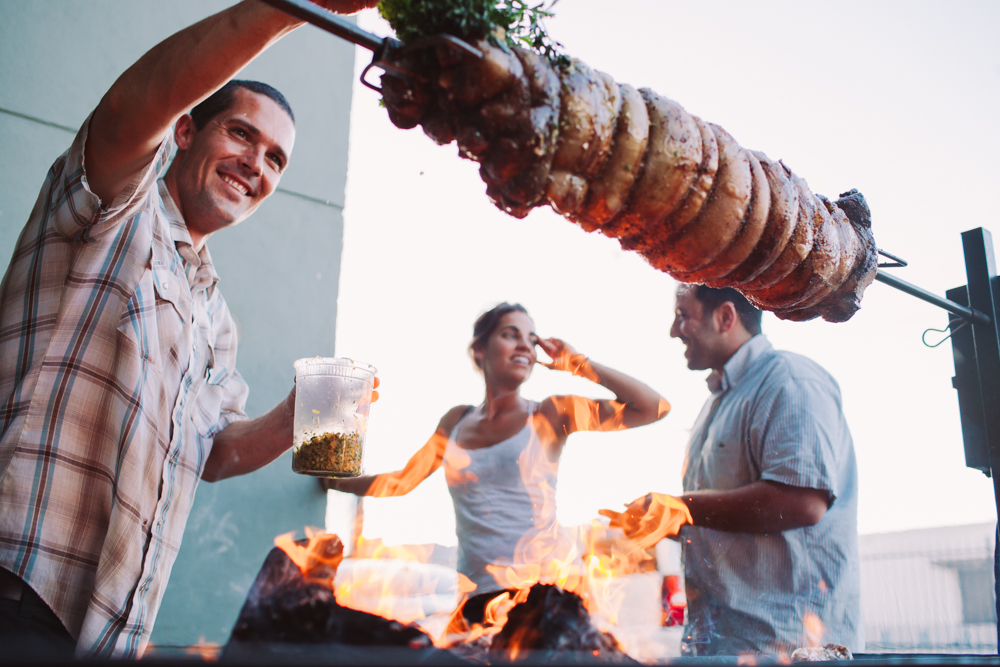 The lamb came off the spit with the help of 3 people bearing heavy-duty towels and was placed on display in front of the whole gathering. Alia and Willy B sharpened their knives while people watched on.  We waited a few minutes to let the juices settle, and then Willy B pulled the rod out of the Lambchetta and they began slicing and chopping and slicing and chopping into a coarse culmination of crispy skin, and tender meat. 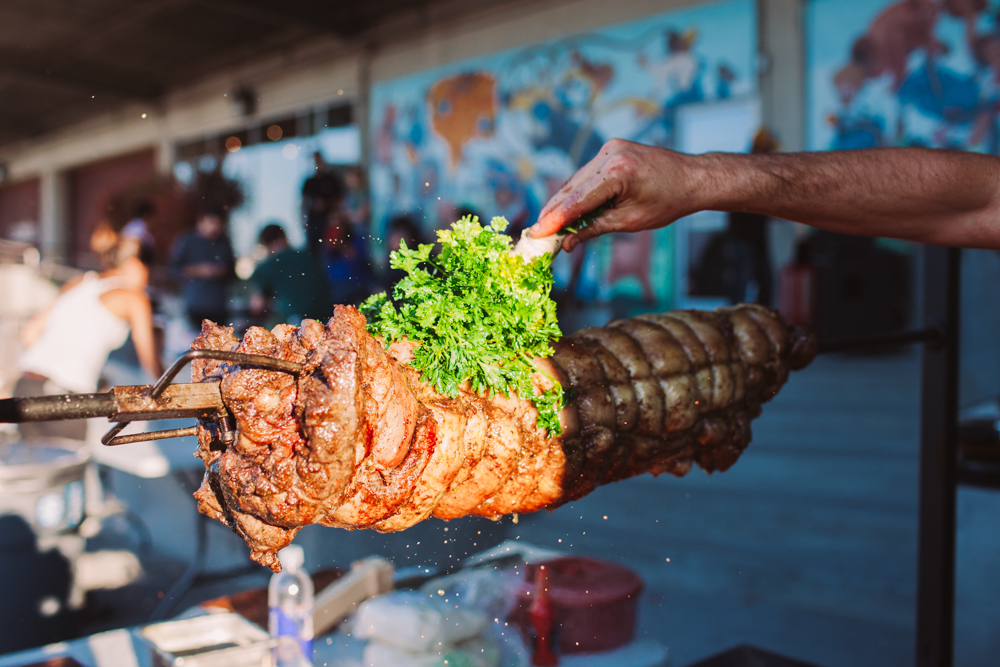 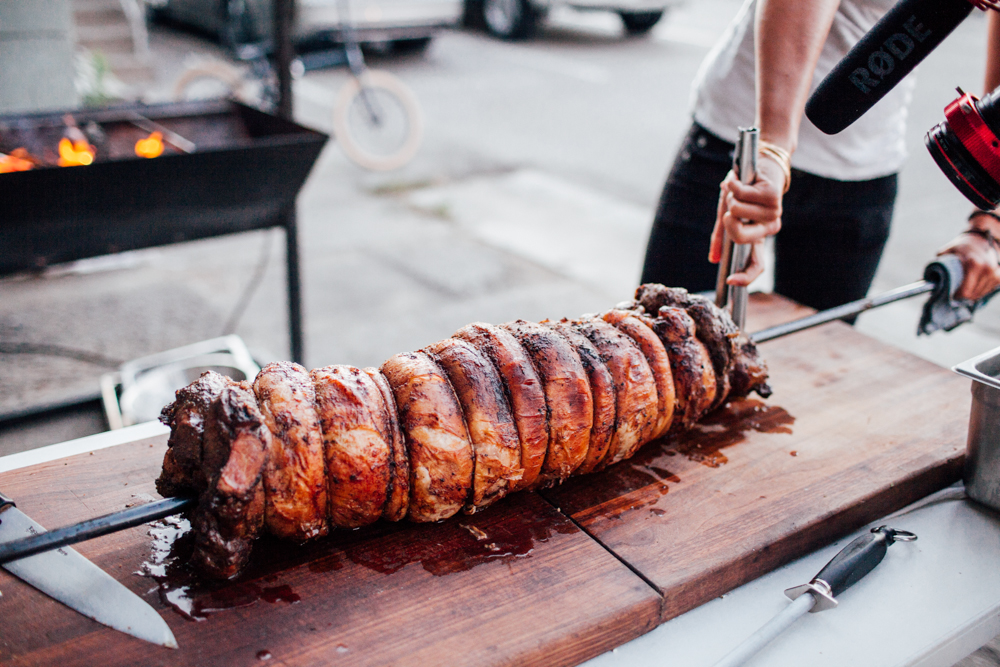 In the early hour while it was roasting, the people kept busy with lighting fireworks and parking lot drag racing. Jon Buscemi even stopped by. See why in Bobby’s post “Rough Cuts.” 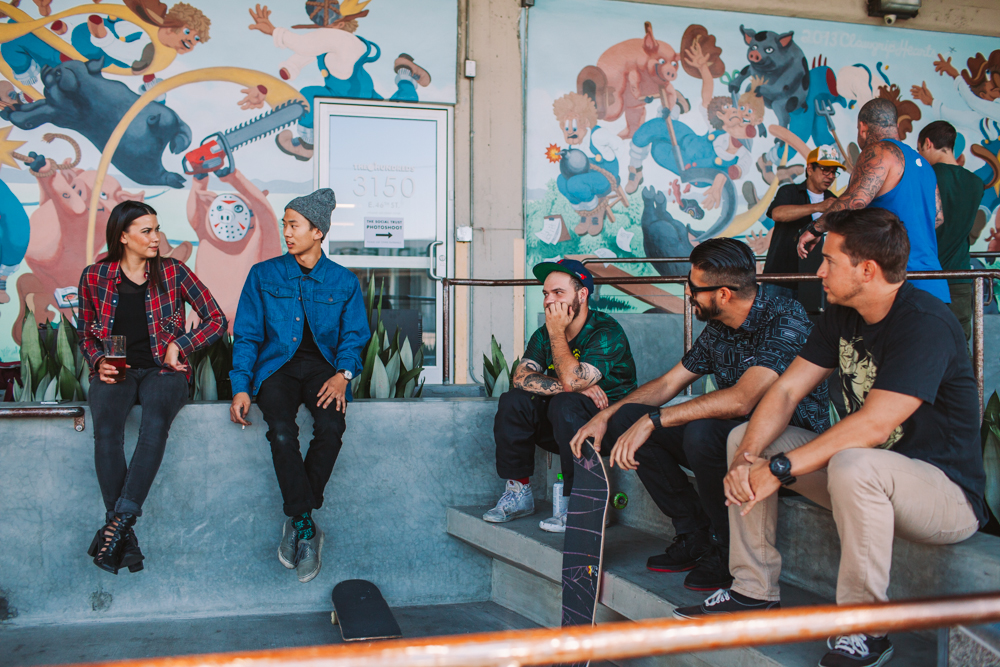 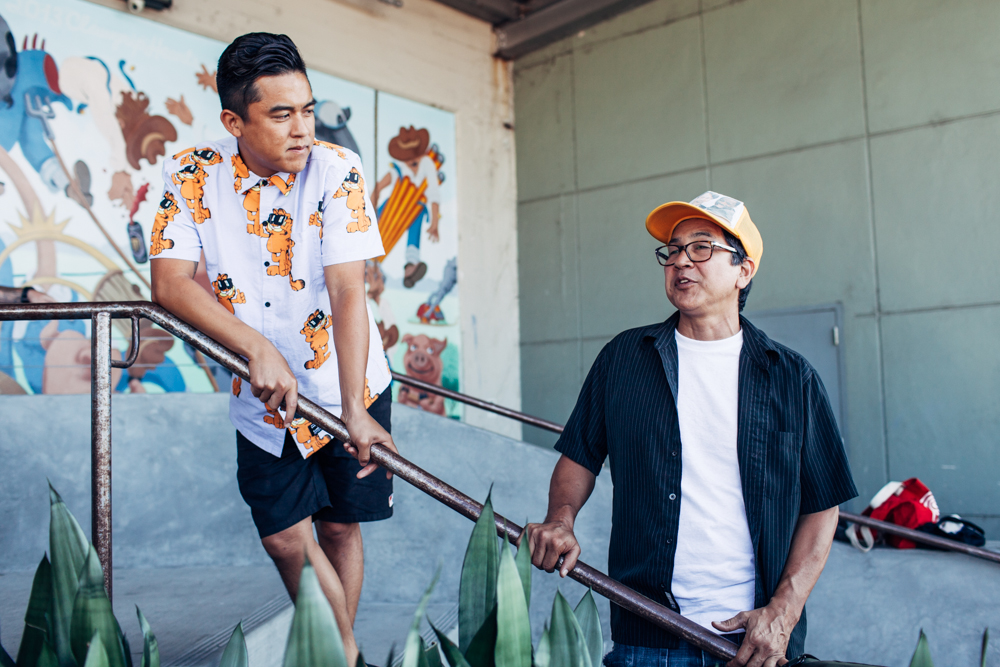 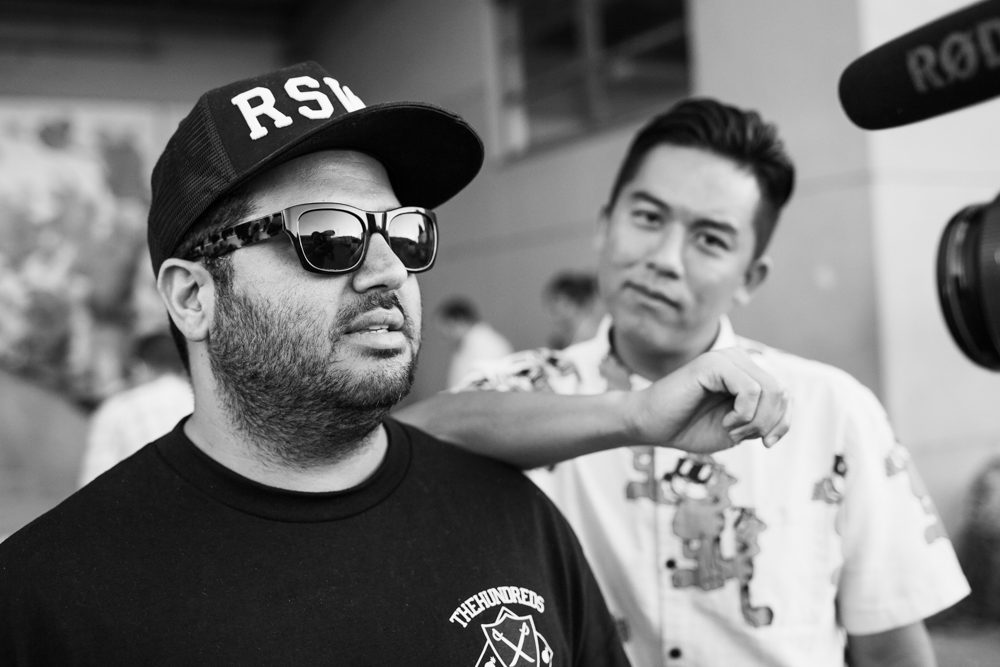 I was hard at work firing up the tortillas with Tom.  People were patient in their silence while watching us, but anxious and excited in their pace and gaze. 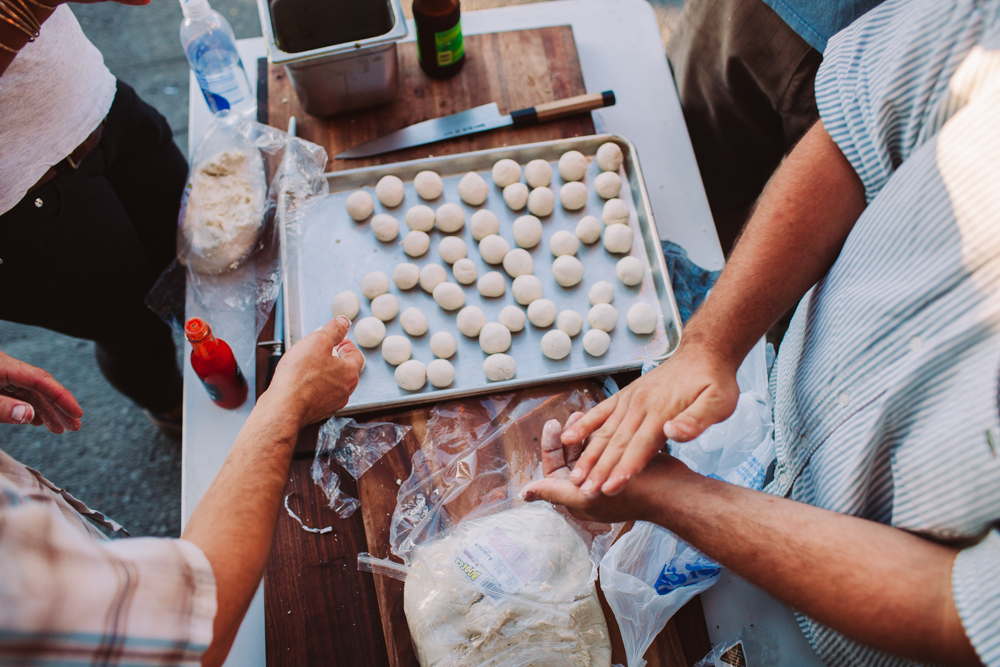 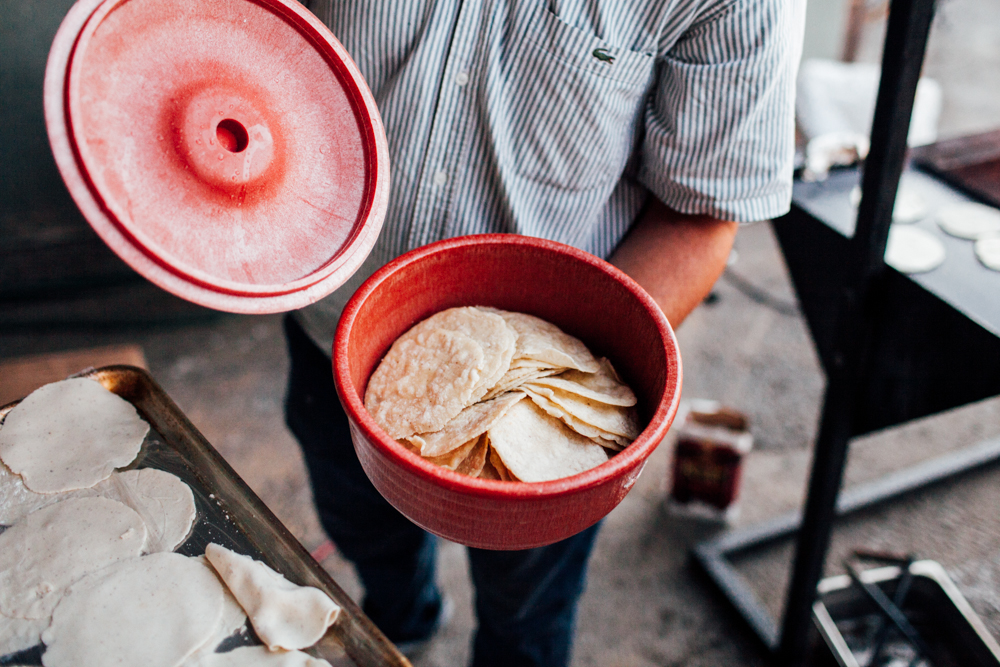 It took about 10 minutes to cut the lamb. The juices ran off the chopping block and the smell of green onion filled the air, along with the fire and ash from the pit.

Everyone ate the lamb! We even persuaded some of the proclaimed vegetarians. For many, it was an initiation to the meat and one I was happy to introduce to people’s palates. They said they have never eaten such a cut, and for others, the lamb was a brand new experience. People shared their stories as they walked up for seconds, covering tender chunks of the lamb in yogurt mint sauce, and naturally fermented hot sauce.  We all sat around and chatted. 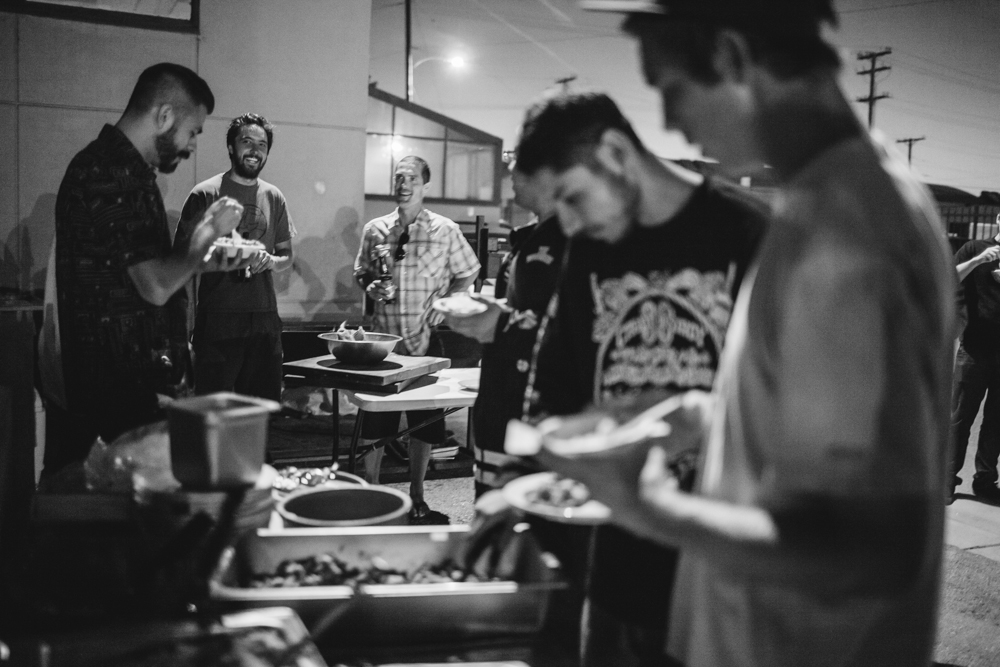 That night at The Hundreds, we didn’t kill a lamb, we didn’t sacrifice it, but we deboned the whole sucker and  all came together to make a meal that sets the mark for the beginning of more culinary adventures to come!