Designer Kyle Ng‘s apartment is an anomaly of peculiar proportions. He collects taxidermied animals, African barbershop signs, ceramics, and even a budding stash of vacuum cleaners. But his penchant for hoarding oddities stems from a deep obsession with nature, art, and psychedelia – a passion with such specificities that you can’t help but be inspired by the vigor of his curiosity.

Formerly the designer/founder of now-defunct menswear line Farm Tactics and craft-inspired AXS Folk Technology, Kyle’s currently one of the main cogs behind one of my favorite new brands Brain Dead, run by the eponymous collective who currently has a black light group show at Slow Culture gallery that ends this Sunday. Beyond his expansive taste in art and objects, he has a simultaneously humorous and almost spiritual rhyme and reason behind each interest. I was curious, and met up with Kyle at his home recently with photographer Julian Berman to document a few of his favorite things and why:

“Alien is one of my favorite movies. It’s the perfect amount of art and science fiction. it’s cutting edge and groundbreaking from the aesthetics to the story. Before Alien, there were hardly any strong women in horror films. They were victims, whereas she’s the leader, the hero. I really love that along with H.R. Giger’s concept art, and how it’s heavily influenced by Jodorowsky’s Dune. I love that there’s a weird hypersexual element.” 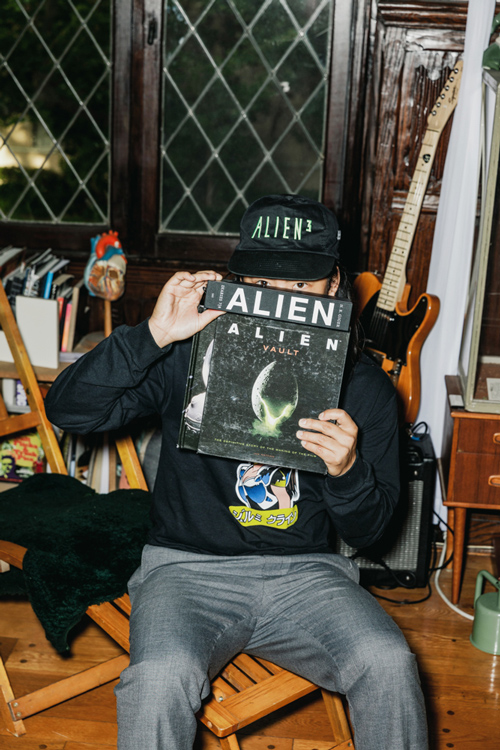 “Peanut’s cool. Me and my girlfriend found him. We never wanted a dog really. We were walking down the street after eating lunch and passed an adoption spot. He looked like a frog because he was smiling – he was so dumb. We said, ‘We have to get this dog, he’s so dumb looking.” When we got back home, he was a little asshole. He’s not nice to anyone except us. He’s a terror. I like him because he’s super hard-nosed who’s into what he’s into.

He’s like the stubborn homie that just hangs out. He’s the Blue Collar Dog or something, the Bruce Springsteen Dog.” 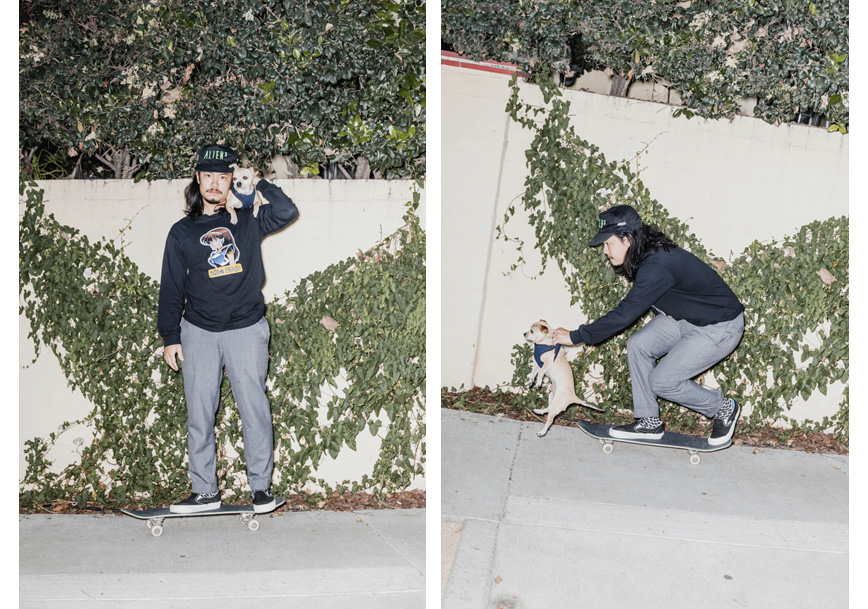 “[My pet chihuahua Peanut’s] like the stubborn homie that just hangs out… the Bruce Springsteen dog.”

INDIANA JONES PAINTING HE BOUGHT FROM A CHILDREN’S SCHOOL

“My friend was helping out at this special needs art school. She posted this painting on Instagram and I guess the backstory was that it was painted by a kid on the autism spectrum. It was from a class where they painted movie posters they really liked. When I saw it, I thought, Damn, this is so amazing. The perspective is so interesting to me. It’s almost like a pure form of creativity – there’s no context of what’s bad or good art, and I really love his context. I like seeing people’s takes on iconic images and pop culture.” 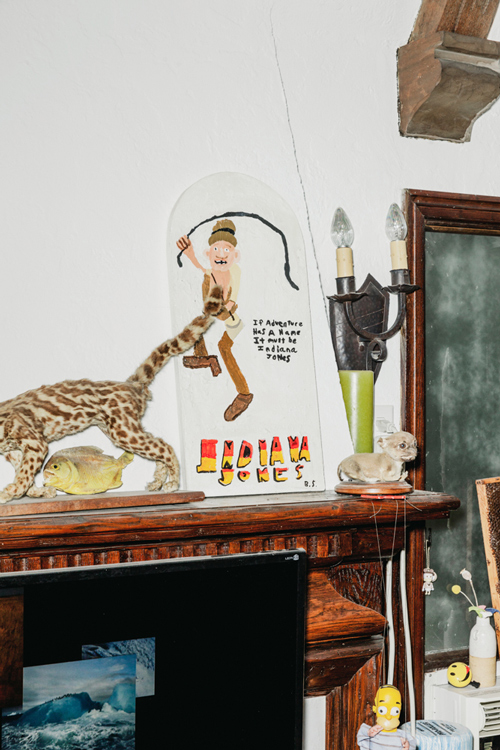 “If adventure has a name / It must be Indiana Jones.” The initials read B.S.

“Basically, I just love Dyson. They’re practical, cool-looking visually, and they’re aesthetically pleasing. It’s hard to make a vacuum cool and desirable. I’m impressed by that. For me, when I think about designing, I always admire industrial designers because they kind of have to solve problems, right? Dyson has to work really well – has to function really well as an object. I think Dyson is a perfect example of the balance of function and design… And now I just keep on vacuuming my house.” 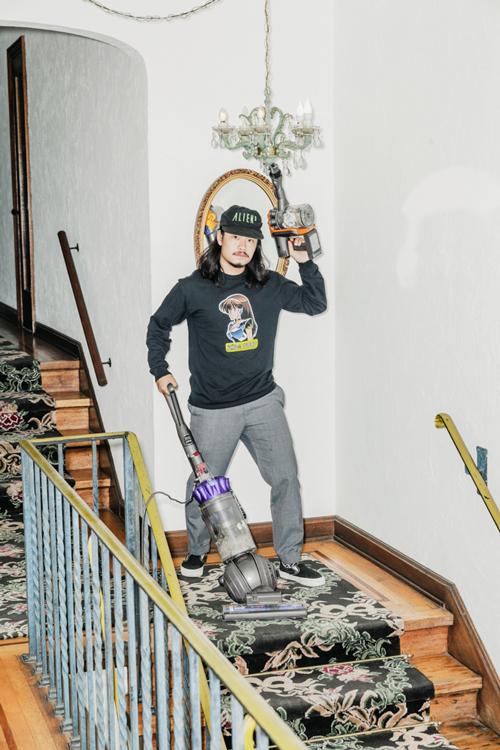 BALDESSARI’S “IN THE NEWS”

“[John] Baldessari is so inspiring. He’s one of my favorite artists of all time. I definitely saved up a lot to get this. He’s the quintessential Californian artist. He influences a lot of my aesthetics. I love his juxtapositions – modern feel with a classical look, the color palette he uses, solid very vibrant colors that he intermixes with photo and collage. I definitely think about him when I do work. 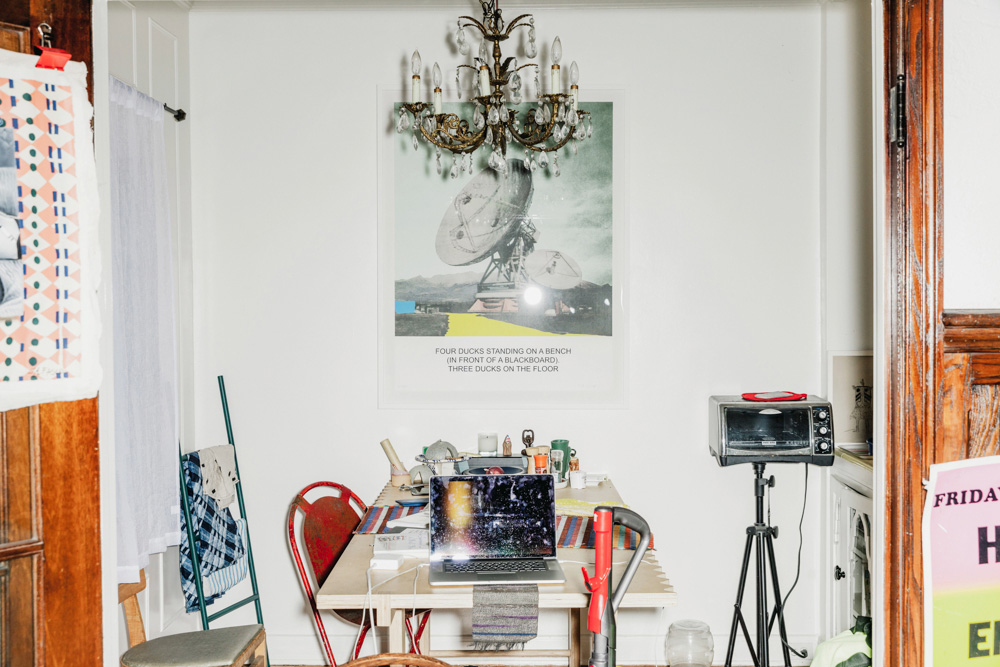 “In the News” is comprised of juxtaposed news clippings from different articles in the same newspaper.

“Basically I’ve been collecting a lot of these barber shop paintings and ethnic pop art from around the world. Sign paintings. I really like the sincerity painted into it, that they have to sell this idea. There’s Nike swooshes in the hair and the cuts are called names like The Concord or the Mach 1 – names of sleek planes. I think that’s really cool because these paintings are fine art to me. There are also representations of famous actors like Teddy Riley from Blackstreet.”

ALINA: Where did you begin to get these?
“I met this guy at the flea market. And I started working with a guy named Kabuli who gets them in Ghana.” 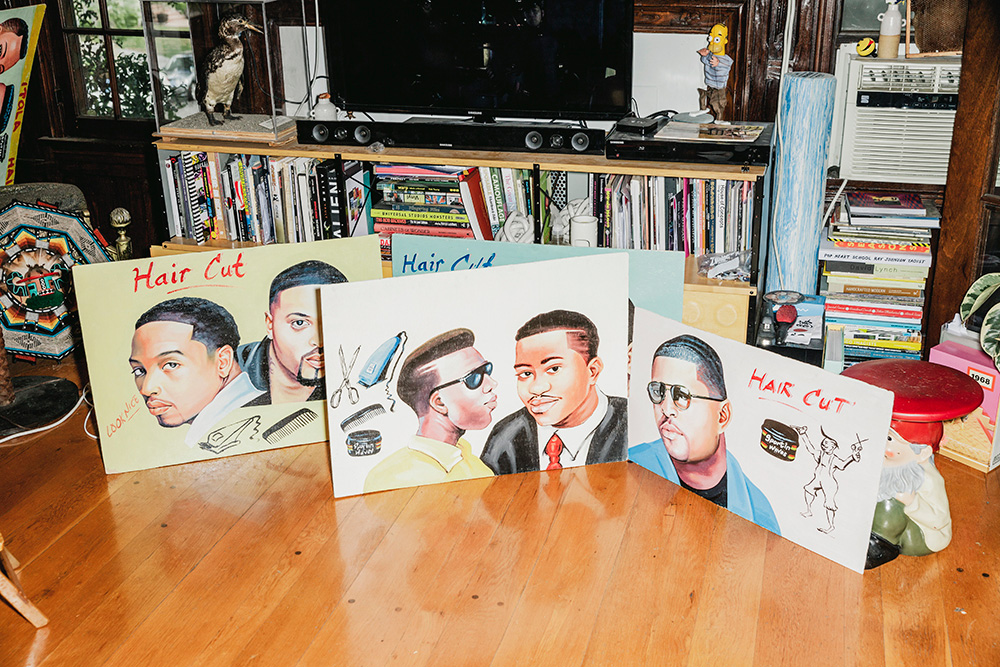 “I’ve always been into the earth and this idea of traditional craft. We collect a lot of different ceramics. One guy Peter Shire has Echo Park Pottery and he was kind of the originator and one of the only American members of the Memphis Design Group – everyone else was Italian. The colors and the patterns he does is reminiscent of that crazy early ’80s and ’90s California. I collect a lot of his ceramics and I have a lot of Ben Medansky ceramics. He’s younger, very talented, but from that tradition.” 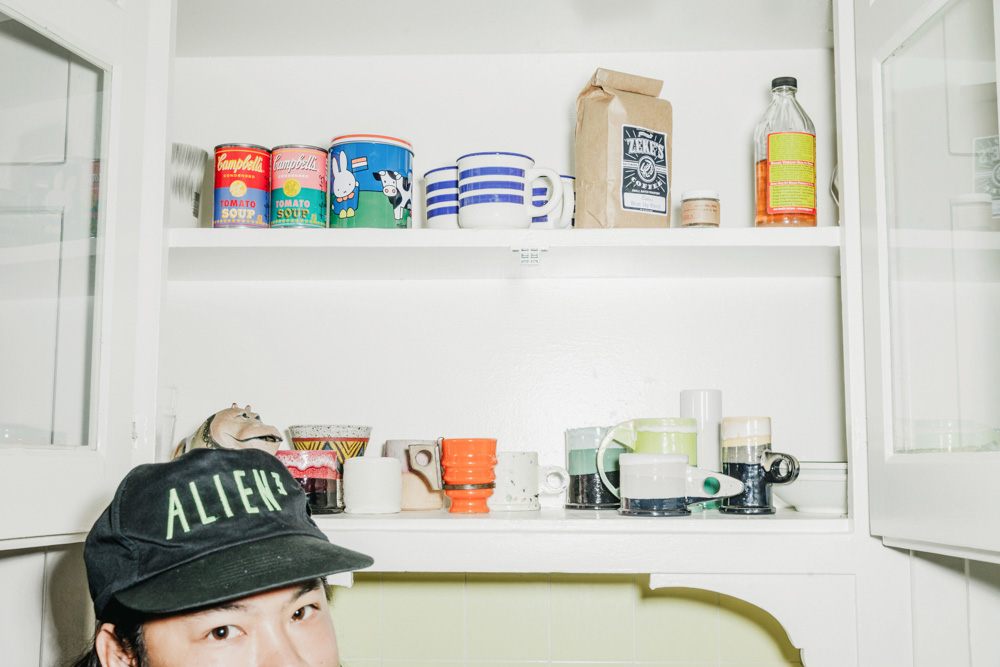 “I collect cabin curiosities. I’m obsessed with them. It was the Victorian way of collecting – a way to harness knowledge and creativity. People had to go around and collect things. I love their idea of knowledge and understanding the world. I’ve never seen a sloth in real life, but now I have one in the house you know? I think it goes back to that Victorian sense of adventure mentality.” 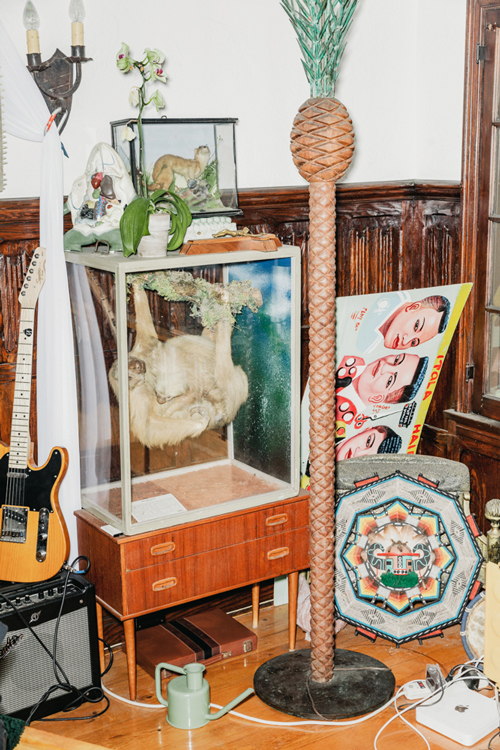 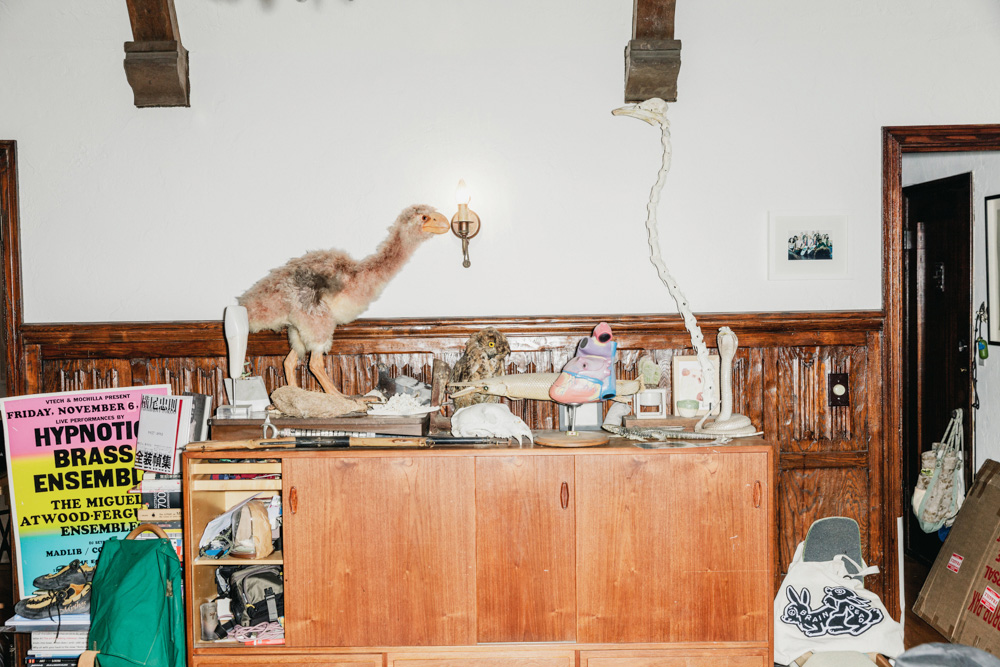 Follow Kyle on Instagram @farmtactics and visit braindead.xxx. For more info on the Brain Dead show at Slow Culture, see below and visit slowculture.com. 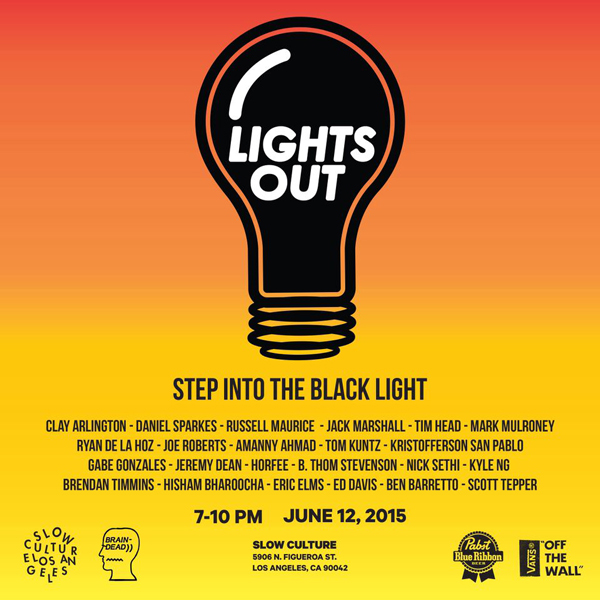 Artist/Designer Benjie Escobar on His L.A.-Inspired "Take It Easy" Show