The work of Dutch artist/illustrator KWILLS is inspired by the things that have made him to the man he is today: skateboarding, hip-hop, classic movies, and of course, sneakers. We recently spoke with KWILLS about his work with shops like FootPatrol, conventions like Sneakerness, and brands like PUMA and ASICS, but before and after the interview was conducted, the conversation immediately went back to sneakers. His sneaker collection has a huge variety, while many collectors focus on one certain model, KWILLS embraces great footwear design, no matter what. When we asked him to list his 10 favorite sneakers of all time, he dove head first into his piles of sneaker boxes and came up with the following list, with a personal illustration for each and every one of his favorites. 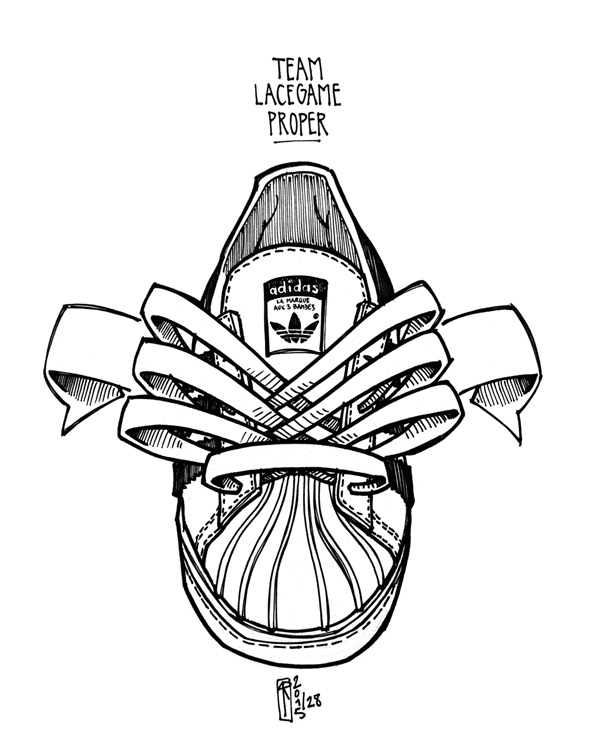 “The adidas Superstar, a.k.a. the Shell Toe is one of the most legendary sneakers of all time. The sneaker was originally introduced as a low top version of the Pro Model basketball sneaker in 1969, it became a certified street legend when Run DMC highlighted the shoe on their 1986 album Raising Hell. Known for its signature rubber shell toe nose, it’s instantly recognized all over the world. The Superstar should be a staple in every wardrobe. It’s hip-hop fashion at its finest, especially when rocked with a good pair fat laces.”

“When the ZX8000 came out in 1988, it blew my mind. It introduced the Torsion bar, which was so high tech at the time, and the original aqua colorway still kills it. I recall it had a pretty hefty price tag for a running shoe, so I had to be patient and eventually picked these up when they went on sale. Its impact can still be felt through the ZX Flux, which is basically a stripped down version of this classic.”

“Nike doesn’t shy away from hybrids, and this one is definitely among my favorites. In 2004, the brand fixed the upper of the Huarache Light with the sole unit of the Nike Air Max Burst. It blends together perfectly. The AD21 colorway of the Air Huarache Burst is still my favorite. A little background: Before 21 Mercer and NikeLab there was AD21, aka the Sneaker Cube. It was a small Nike concept store, located in Tokyo, that displayed and sold unique Nike sneakers. This neon yellow and purple colorway took me over seven years to track down. After I finally got my hands on it I managed to find another pair double up within a year.” 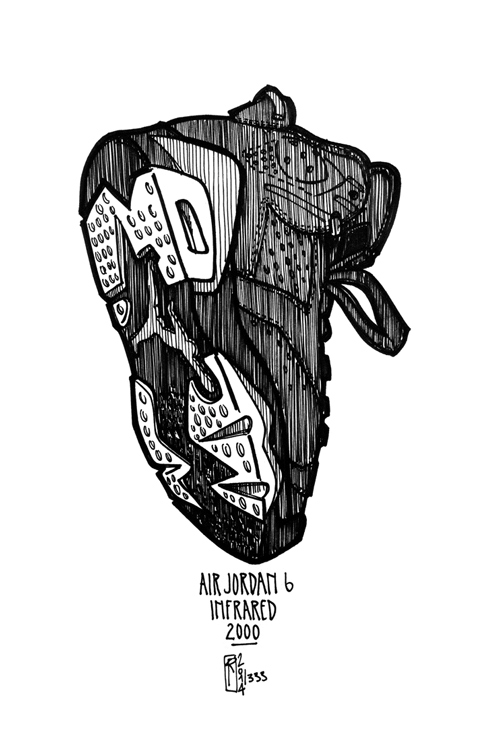 “There are a lot of great Jordans, but my favorite will always be the Jordan VI. It’s another classic Tinker Hatfield design with amazing details. The punched out holes in the tongue, the lacelock, the heel tab—all of it was so futuristic back in 1991, when they first came out. I didn’t buy them at the time, but I did nine years later when Nike first retroed the VI. Very glad I own the last Infrared pair with “Nike Air” on the heel.”

“These were my very first Air Maxes. I love that big, juicy Air bubble, which is why it’s listed twice on this list (the AM94 and the Huarache Light Burst). Add the amazing deep purple color and I simply could not resist. It was great that Nike re-issued the original colorway in 2003 to help a new generation of sneaker fans get acquainted with this underrated Air Max classic.”

“Right before the turn of the century, I scored a design internship in Amsterdam. The Nike Air Sunder Max Mid reminds me of those six months in the capital, as the entire crew at the office wore these. It’s one of the most unique Nike designs out there. It’s such a sick shoe with its uneven mid length, zipper closure, and reflective 3M all around.”

“Gourmet is one the most impressive new sneaker brands of the century. The brand was founded by three streetwear heavyweights: Jon Buscemi (GIRL Skateboards, DC Shoes, later on his own Buscemi label), Greg Johnsen (Union, Supreme, Stussy, Situationormal, started Hall of Fame later on), and Greg Lucci (adidas Originals, Supreme, Zoo York). Their designs were completely different than anything else on the market, and the Quadici is a perfect example of that. Combining duckboots with a full length visible air sole was a brilliant move, and completely compatible with the unpredictable Dutch climate.”

“Back in the ’90s, performance sneakers had a huge impact on skate shoe designs. Runners and basketball shoes inspired many classic skate sneakers. Legendary skater Sal Barbier was a big fan of Michael Jordan, and put MJ’s number on his first pro shoe, the etnies Sal 23. Sole Tech switched Sal from etnies to éS for his second shoe, the éS SLB, which took design cues from the Jordan IX. The inner booty gave your feet an excellent lockdown, and the mid height offered comfort, support, and protection for your ankles. One of the illest skate shoes in 1995, and one of the best shoes of all time.” 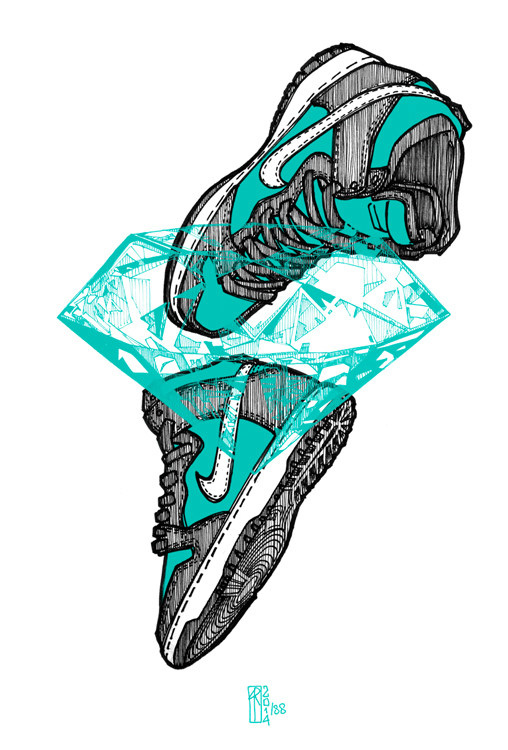 “It’s amazing how Nike’s skateboard line breathed some new air into the lungs of the Dunk. The 1985 basketball classic gained some new traction after a retro in 1999—and the Pro B’s after that—but really took off after Nike repurposed it as a skate shoe. At first, the focus was all on the lows, but after the “Paul Brown” experiment in 2002 and the 2003 Supreme Dunk High collaboration, the high top Dunk became a staple of the Nike SB line. A perfect throwback to skateboard’s early days, where high tops like the Air Jordan 1, Vans Caballero, and Vision Streetwear were the norm for skaters.” 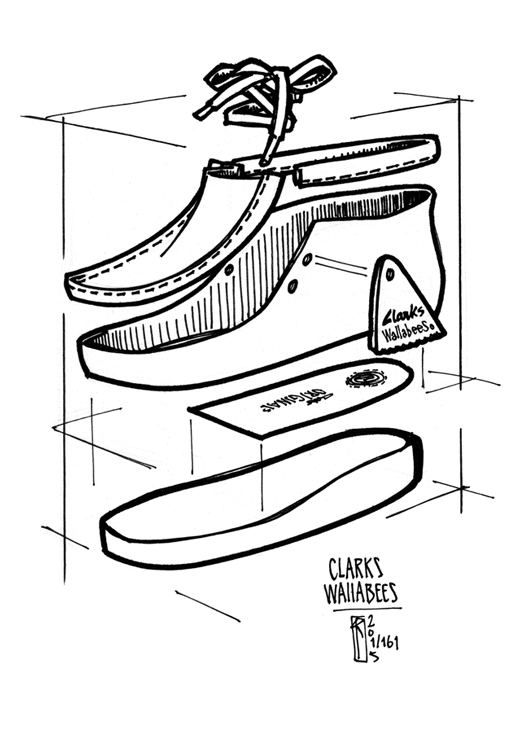 “Favorited by Jamaican rude boys, Ghostface Killah, and Walter White, you simply can not front on Wallabees. Clarks first released the shoe in 1967 under the name “Grasshopper.” Due to trademark issues, the name was changed to Wallabee. This moccasin-inspired shoe stands out because of its simplicity, comfort, and timeless design.”