Ten minutes into watching this sold out multicultural young audience at the Wiltern chant the words “We Gon Be Alright” and I’m beginning to truly appreciate the legacy of the artist that brought us all here. Riddled in controversy recently over music critics’ feelings towards the creative merit of his genre-defying 3rd album To Pimp A Butterfly, West Coast legend in the making Kendrick Lamar has taken his intimate Kunta’s Groove sessions across the country, quietly reminding the hip-hop world that this is his time. 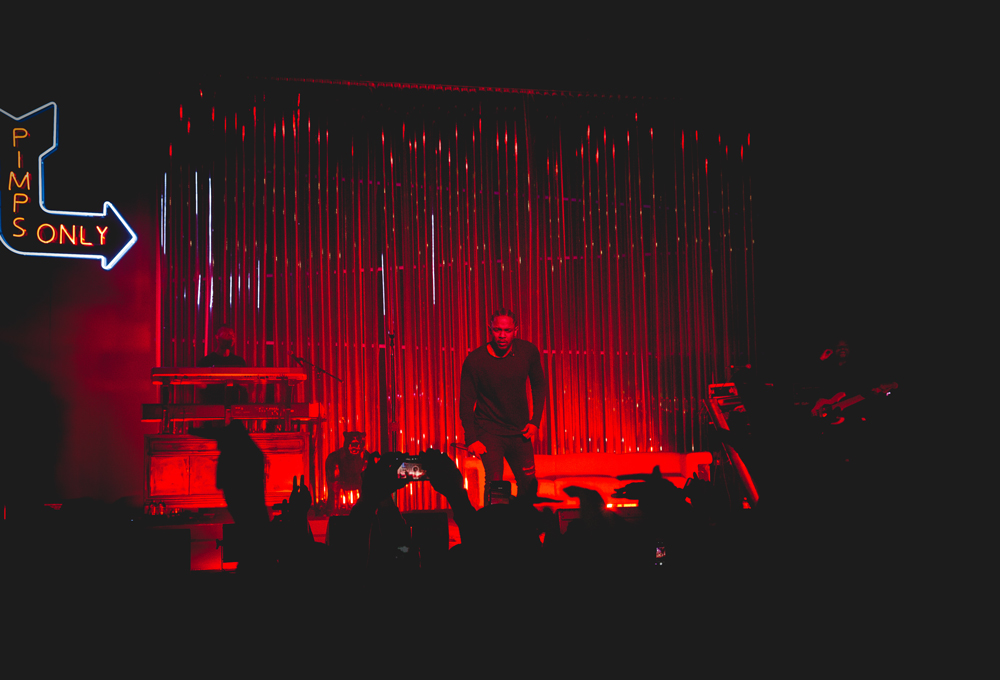 And with his band Wesley’s Theory and labelmate Jay Rock behind him, TDE has done a great job making that mission very clear. Opening the night up with his intense baritone fervor, Watt’s finest Jay Rock hit the 1800+ Wiltern with all the highlights from his recently released 90059 project, enrapturing the audience with his grimy portrayal of the streets that have bred countless stars out of the LA scene. 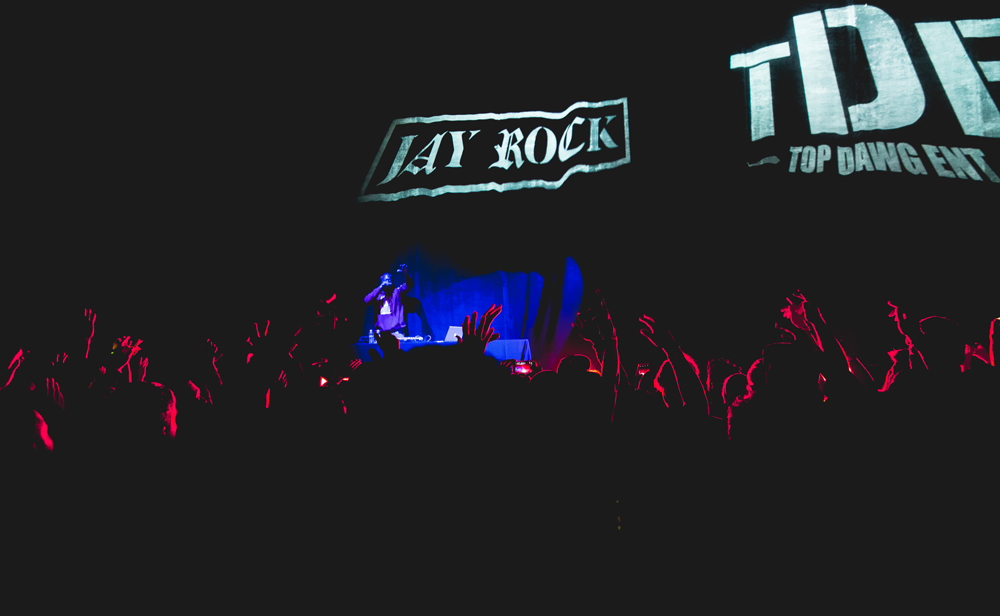 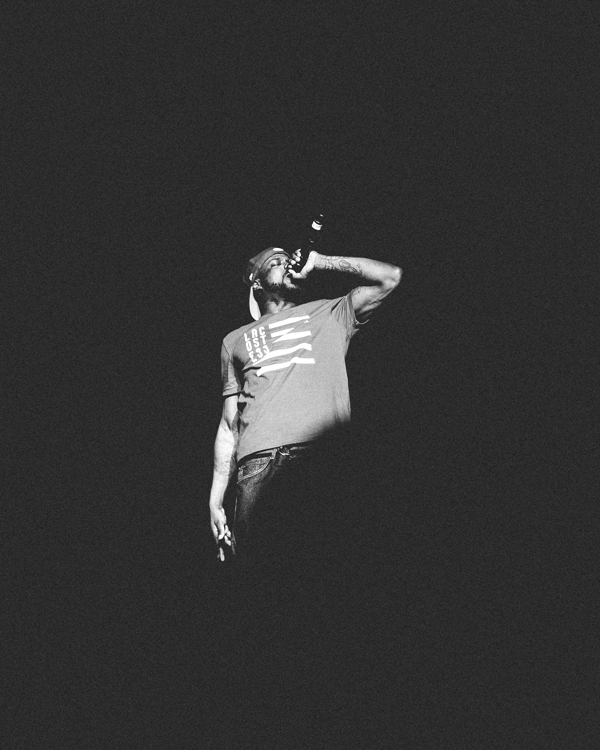 After the set, the building soon made it clear who they were there to see: King Kunta. The stage set up referenced some lyrical themes of TPAB, and the 28 year old Hub City representative emerged truly looking like a man at the height of his career. Kendrick immediately claimed control of the room with the fan favorite “For Free?”, and led his band and the rest of the room into a feverish journey through a project he said “may be my first and last time playing To Pimp a Butterfly.”

Having a live interpretation of TPAB strictly through the sounds provided by his backing outfit Welsey’s Theory showed Kendrick’s dedication to the sonic shift that led him to stray aesthetically away from the production that garnered him stardom with Good Kid, M.A.A.D City. It proved that this wasn’t a mere flirtation with that new sound for the sake of being different.

No, this was a exhibition of one of the biggest stars in hip-hop potentially at the arc of his career, deeply interested in that funk, spoken word, free jazz hybrid sound collage. With sacrifice comes greatness. 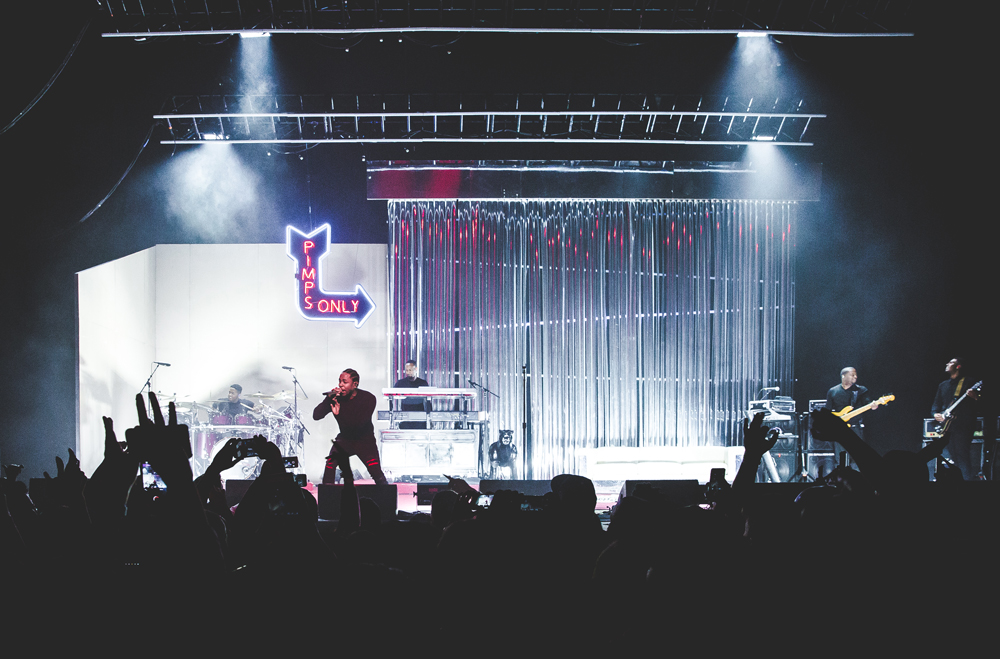 Kendrick still made sure to throw in the hits that elicited a heavy vocal response from attendees, like “Swimming Pools” and “Bitch Don’t Kill My Vibe,” but the overall repertoire of the night was committed to presenting To Pimp a Butterfly. So while taking fans to the heights of “I Love Myself” and “King Kunta,” the maestro made just as much of an effort to slow down with emotional intensity on records like “These Walls,” “Momma,” as well as “Hood Politics.” In between songs, Kendrick spoke on the personal upheavals he’s had to deal with since becoming a certified star, and his own personal fears about how the public would receive of a body of art like TPAB—a work that could possibly affect his presence in hip-hop. The crowd really got a chance to glimpse into the inner workings of an introverted artist dealing with the pains of fame.

Now I’m back to the beginning of this review, waiting for this Messianic figure to reappear on stage and give the audience the one record that over the summer became the face of a creative phenomenon in hip-hop as well as a rallying call for Black Lives Matter; I connect with the collective energy in the grand room and begin to chant with everyone else: We Gon Be Alright. And I believe it. 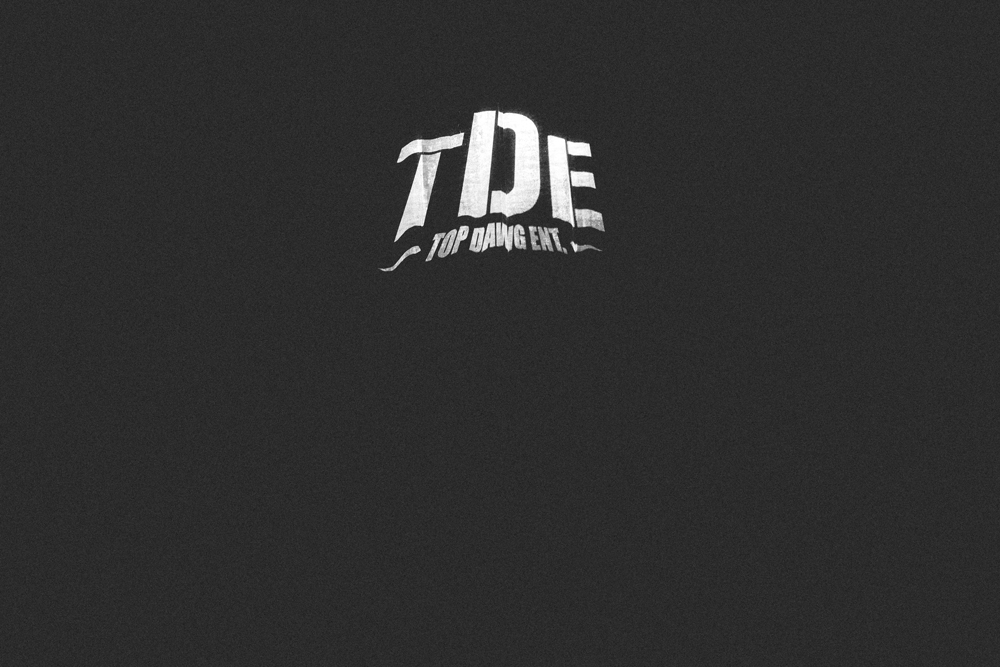