Sign painting is the unnoticed art form that sweeps past your eyes with faded signs on storefronts in every city you travel through. If you squint your eyes enough, you’ll zoom focus on the hand-painted phrases, salutations and services of businesses made by artisans carrying on an old American tradition. With an ever-growing society plagued by the chase for convenience; sign painting is a dying art form overlooked by many and carried on passionately by few.

It’s an artistic crafts that requires years of learning – disturbing the convenience of one-click-away career choices. The artisan lettering and techniques have slowly been replaced by computer-programmed fonts causing the business, tradition, and sense of community of sign painting to die like an ancient art form. 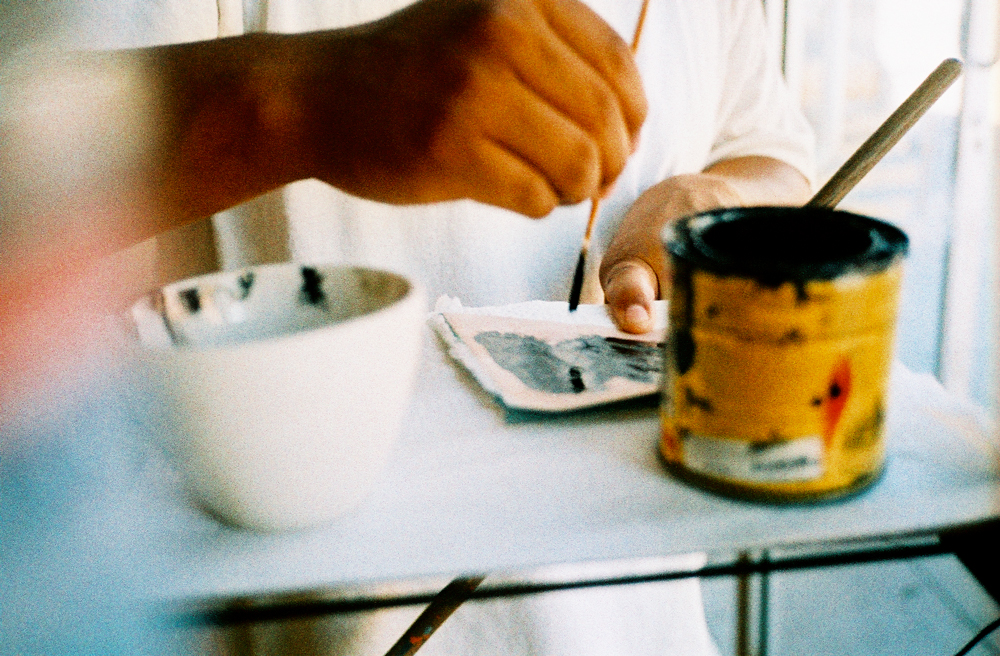 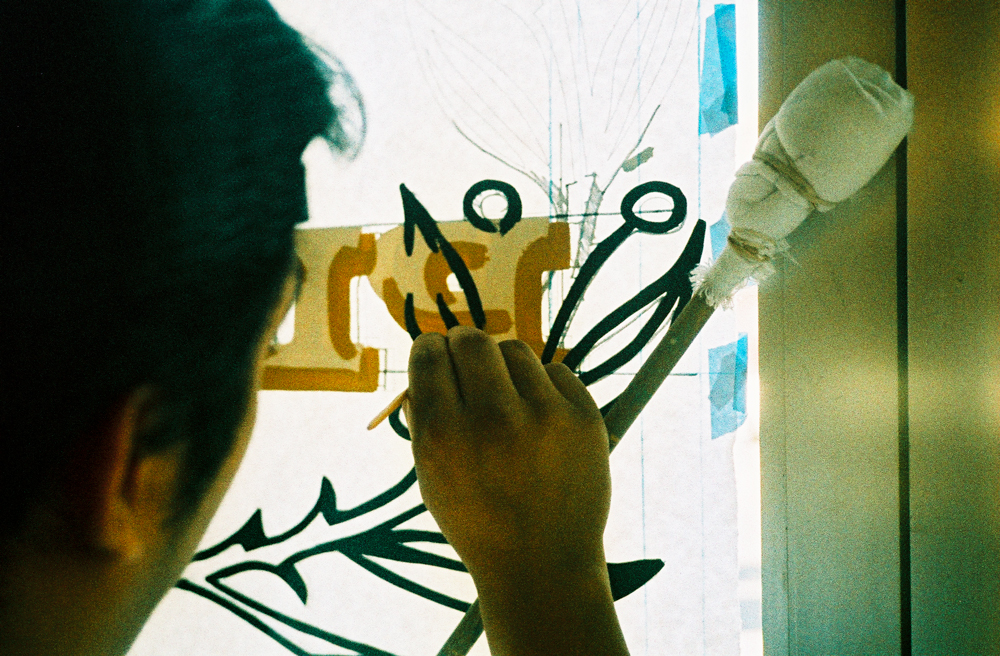 The homie Jav Dolla is one of those young Los Angelenos putting his fingerprint on the city and neighborhood he grew on through an effervescent pursuit and growth as a sign painter. Still a student, yet arm’s length from the next sign job, Jav Dolla aka Javier Matias fully immerses himself in all that is the culture and artistry of professional sign painting. 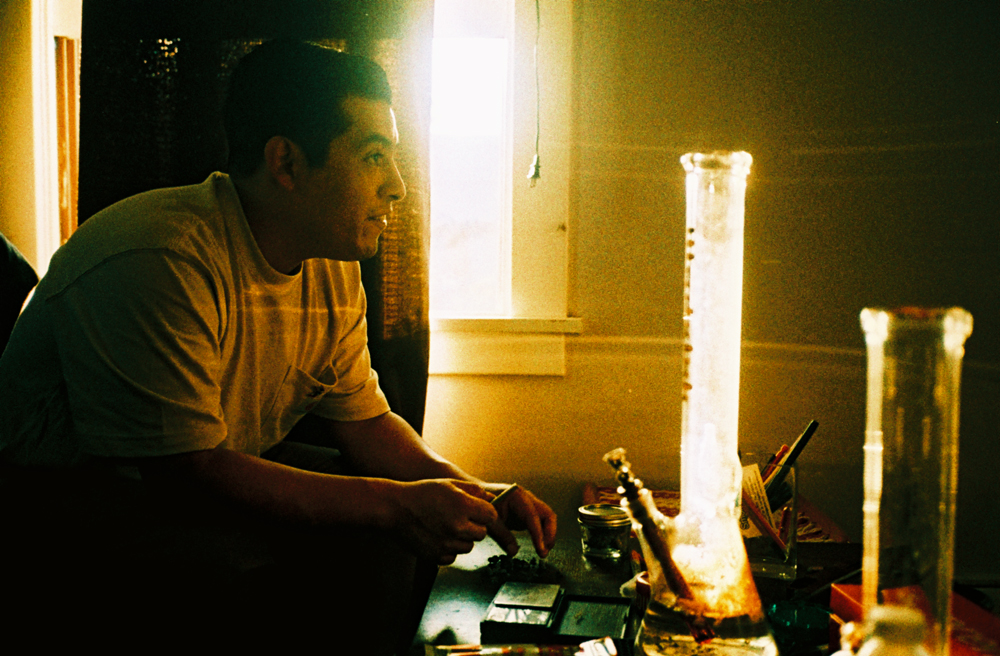 Throughout the years, this site has seen young Jav through random videos and photos during his time being everyone’s lil homie on RSWD. He was the bloodshot-eyed kid grabbing you t-shirts in-between sweeping the floor and smoking weed in the alley. Years later, Javier is seemingly grown up with an adult haircut, a puttering moped that reads “Mid City” over the handlebars, and a schedule packed ear-to-ear with sign painting classes at LA Trade Tech College.

Whenever I leave my current stomping grounds of Highland Park to venture back into life in Los Angeles and Hollywood; I usually am taking the streets to duck whatever traffic exists on the I-10 WEST. During most trips, I’ll weave through Mid City on the Kingsley block to visit Jav at his family’s home. This past week I stopped by to visit the Matias, chat with Javier about the importance of sign painting and to eat his Grandma’s home cooked food… 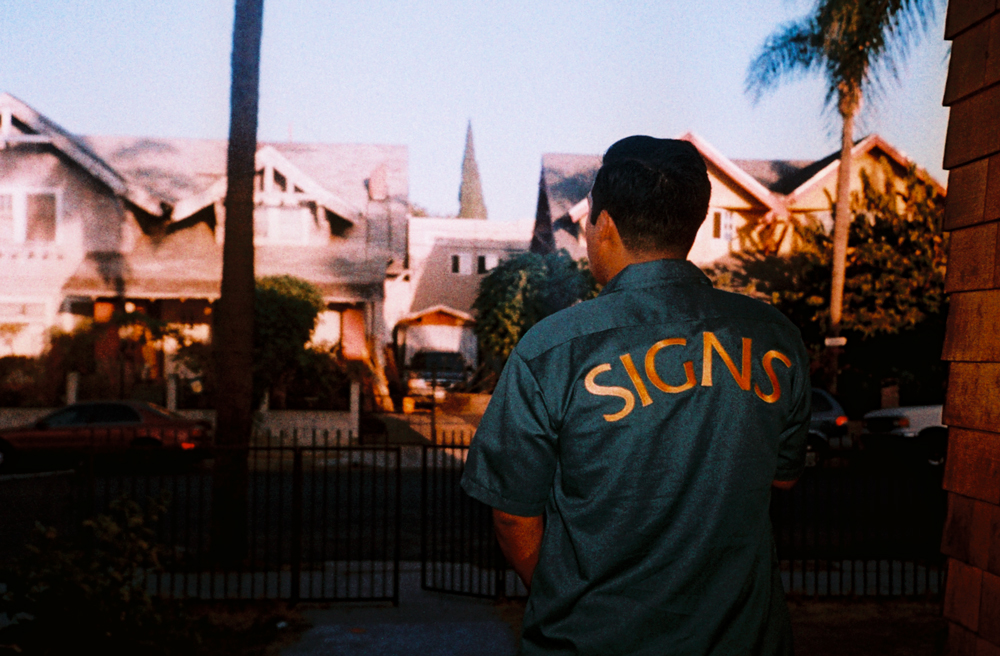 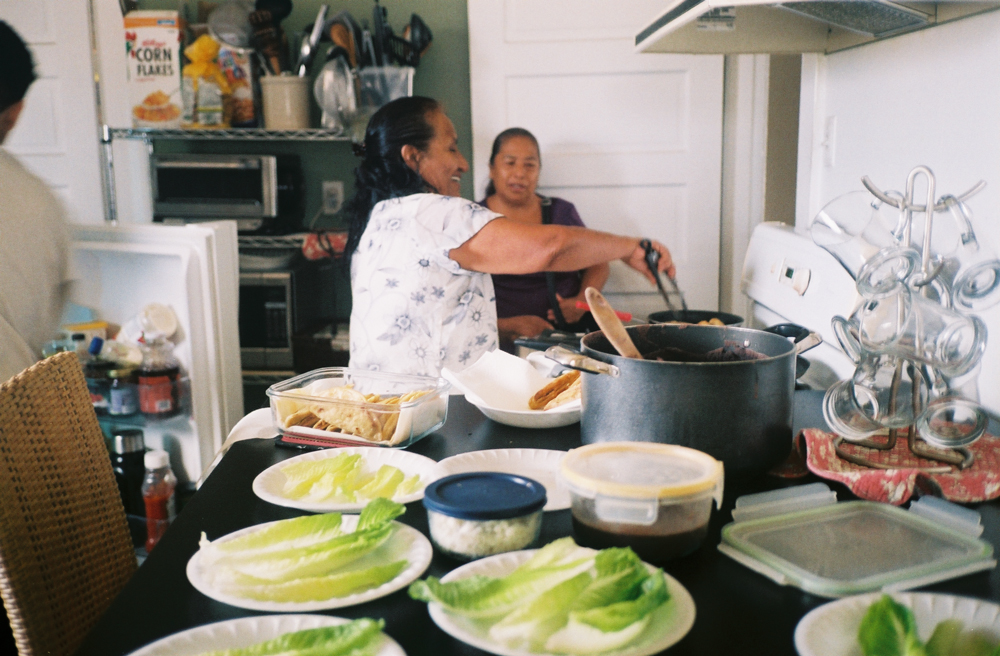 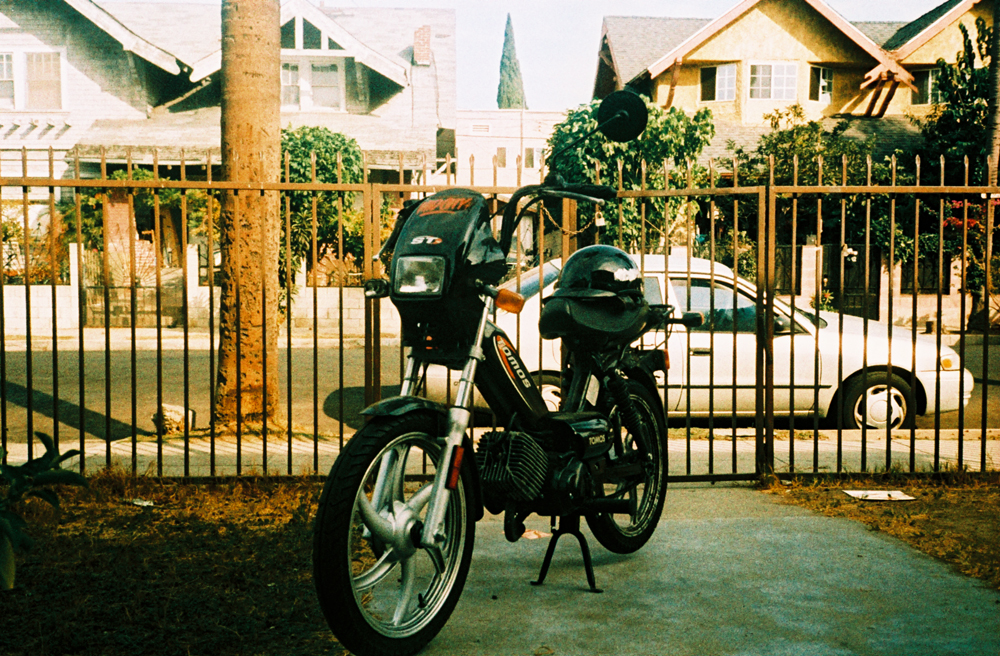 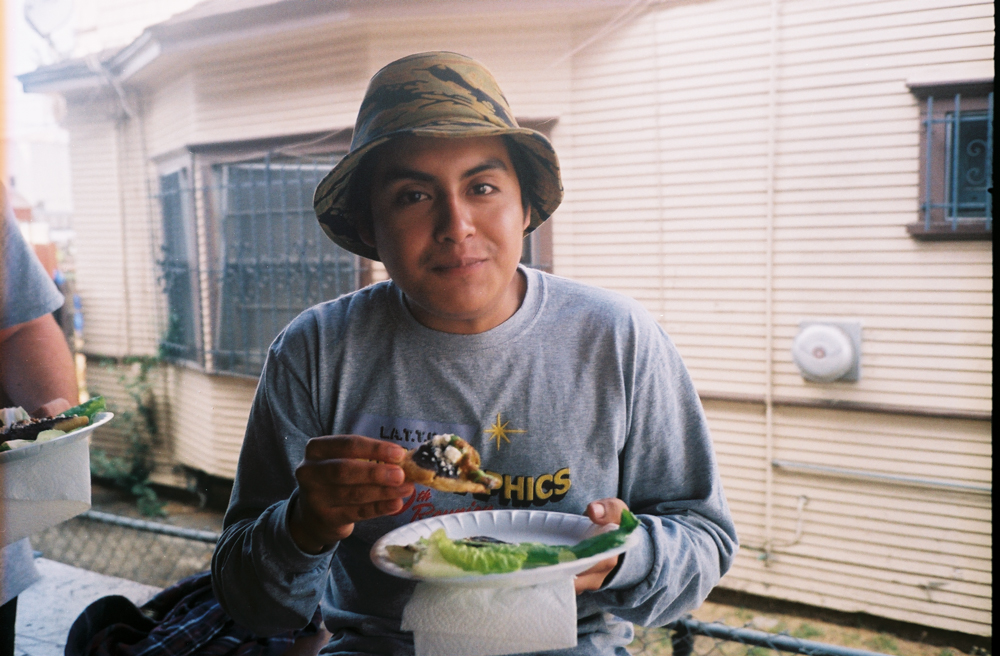 After a serving or two… or three or four of Grandma Matias’ fresh molotes; I ducked the Indian Summer heat on the stoop with Javier and friends as they setup their paints and brushes while explaining the significances of the art of sign painting they’ve all grown passionate for.

We discussed how vinyl and sticker services fail to care about the businesses they’re contracted by the same way sign painters do. They explained that these services don’t wish to create captivating advertisements that may actually benefit the business and community as a hand painted sign would. They spoke aggressively that sign painters provide artistic work for the benefit of their community at half the price of lackluster products of vinyl and sticker services. 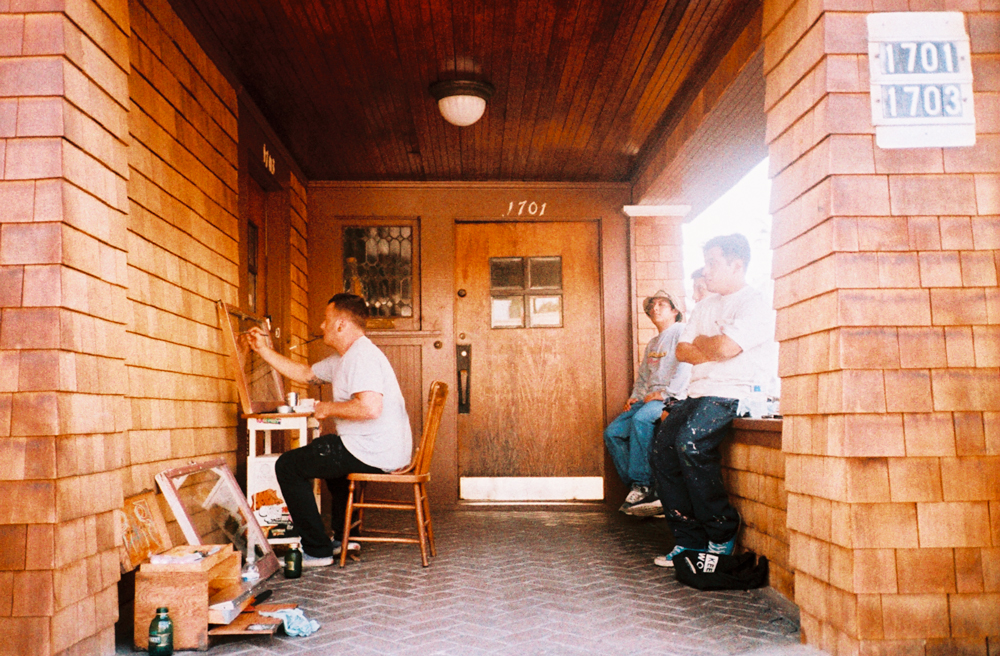 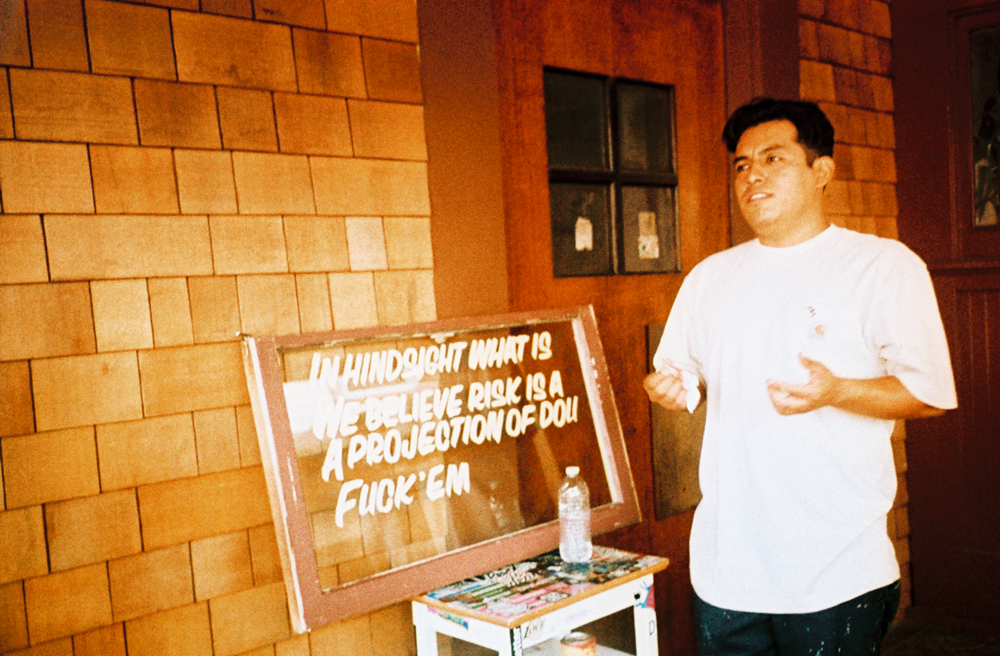 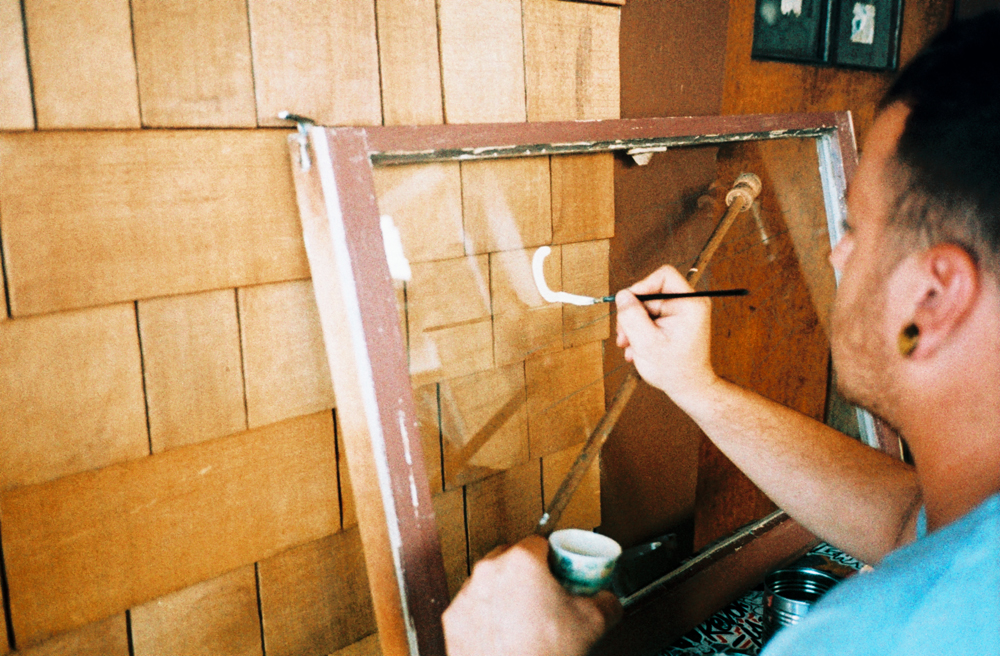 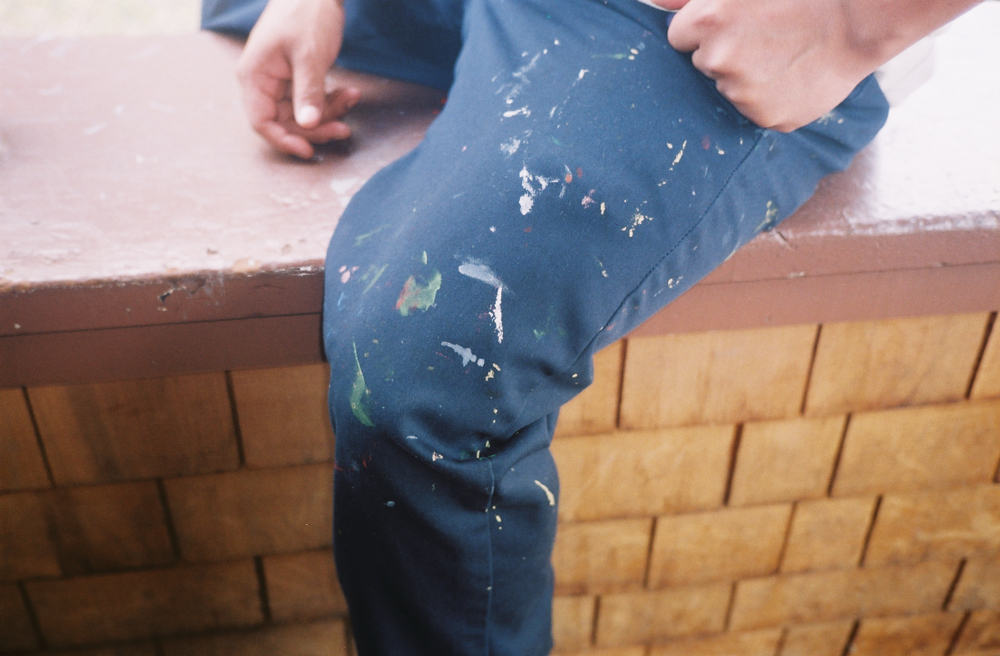 There’s a humble Mexican food establishment called Tacos Locos around the corner from Javier’s home. Javier and I visit the local favorite for some mediocre/amazing tacos before he continued work on a sign for Lee Spielman of Trash Talk. On the one block journey, we walked past a couple liquor stores, a video rental store, and a bike shop. All the businesses face the world with tall glass windows and aged awnings masked with faded paint.

Before I could even point out the opportunities, Javier began relentlessly listing all the different sign painting ideas he had for his neighborhood’s businesses. He pointed at every blank wall as if it was a vandalism project – and went on to describe the colors, phrases and angles of Gothic font that would work for each storefront. From reverse window signs on the aged video rental shop to a Tacos Locos sign facelift; young Jav envisions his community aging gracefully through his contributions as an artist. 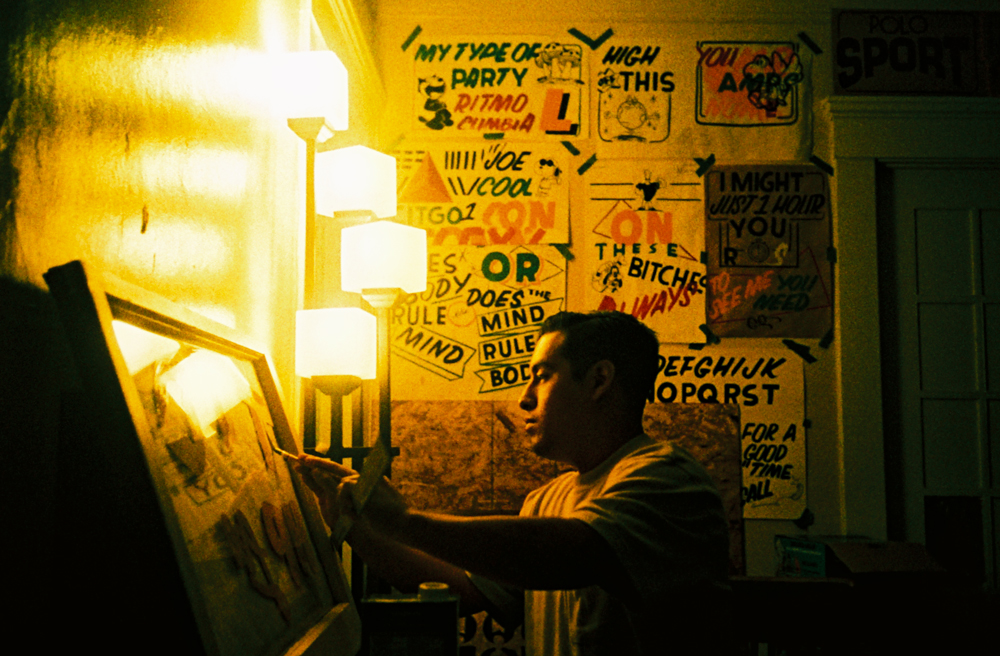 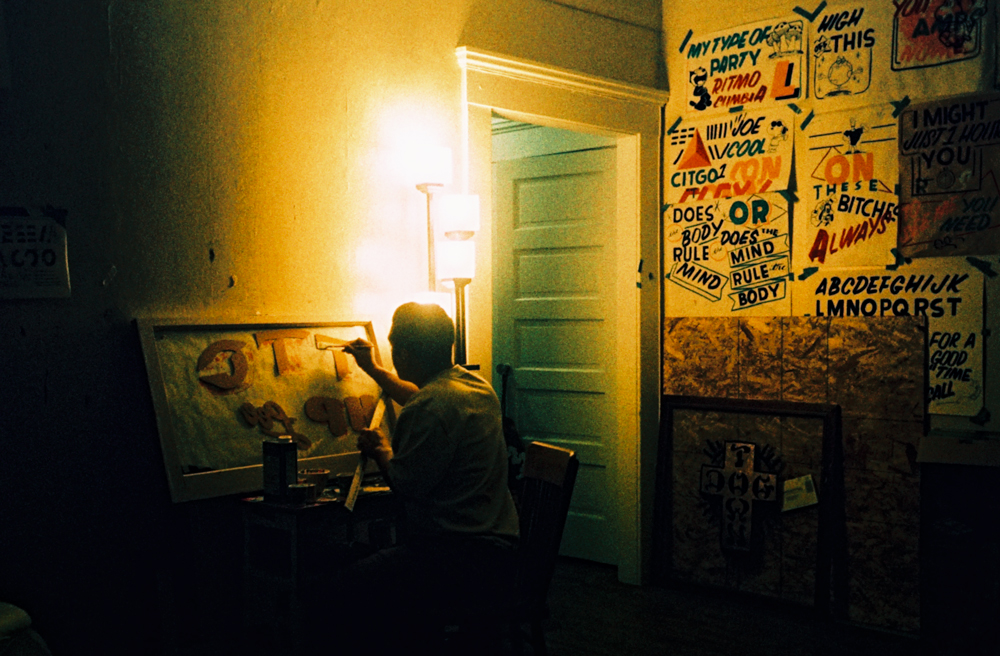 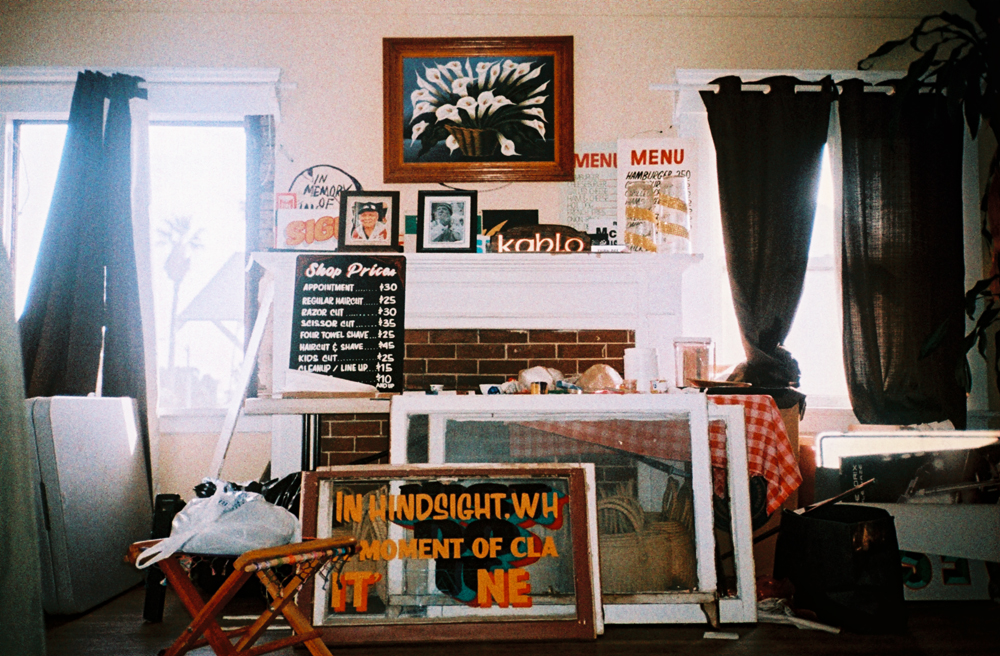 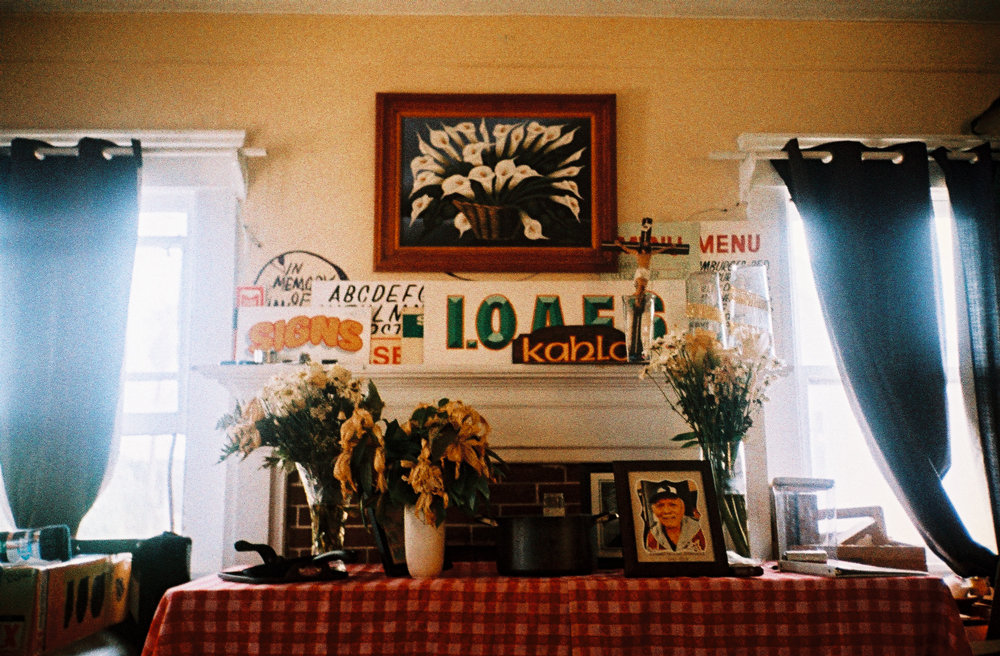 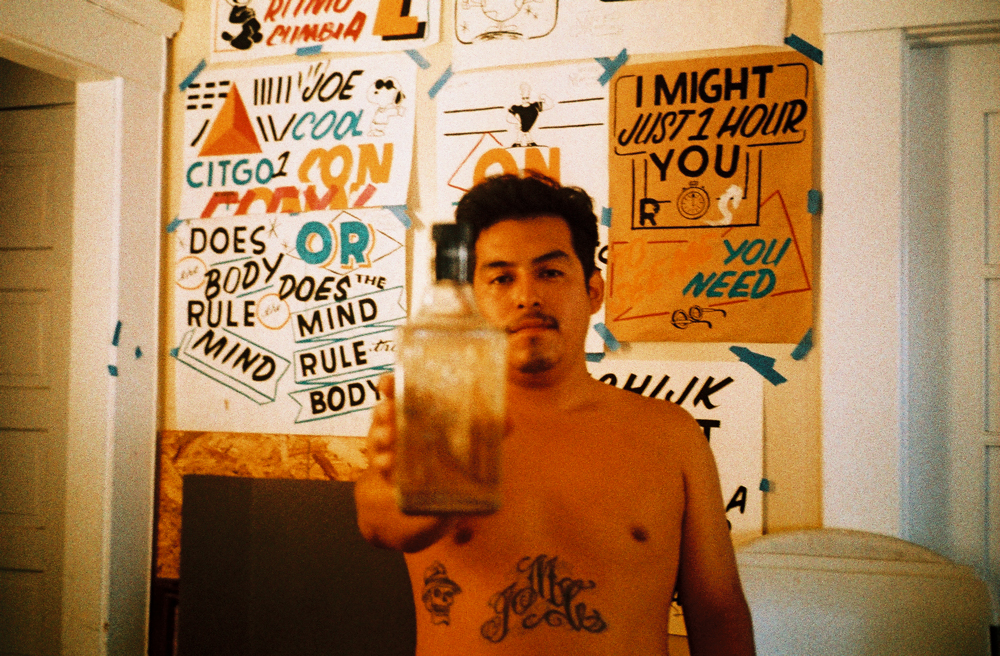 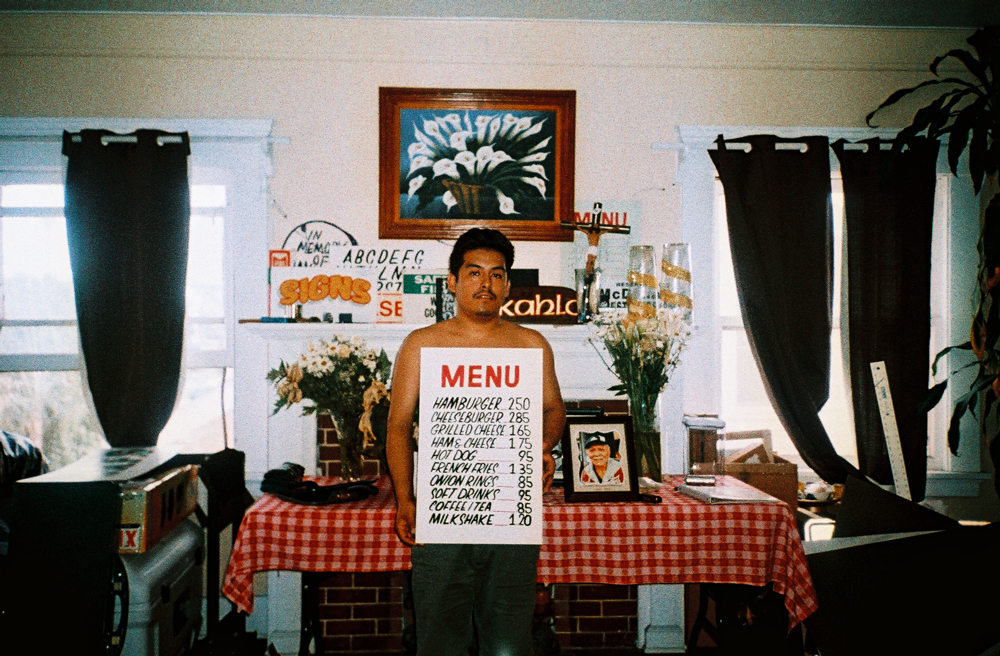 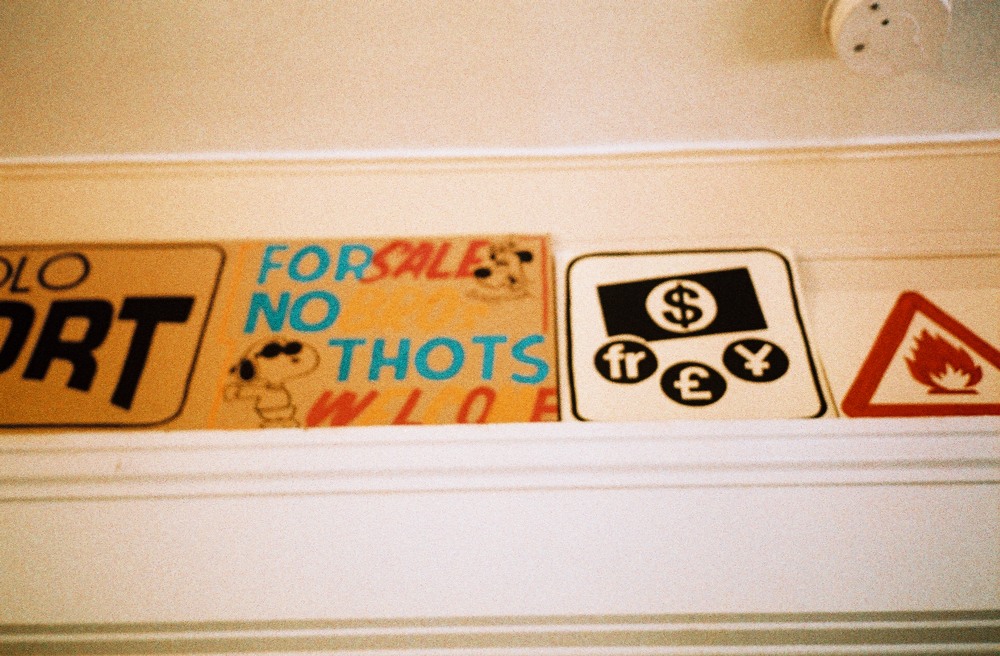 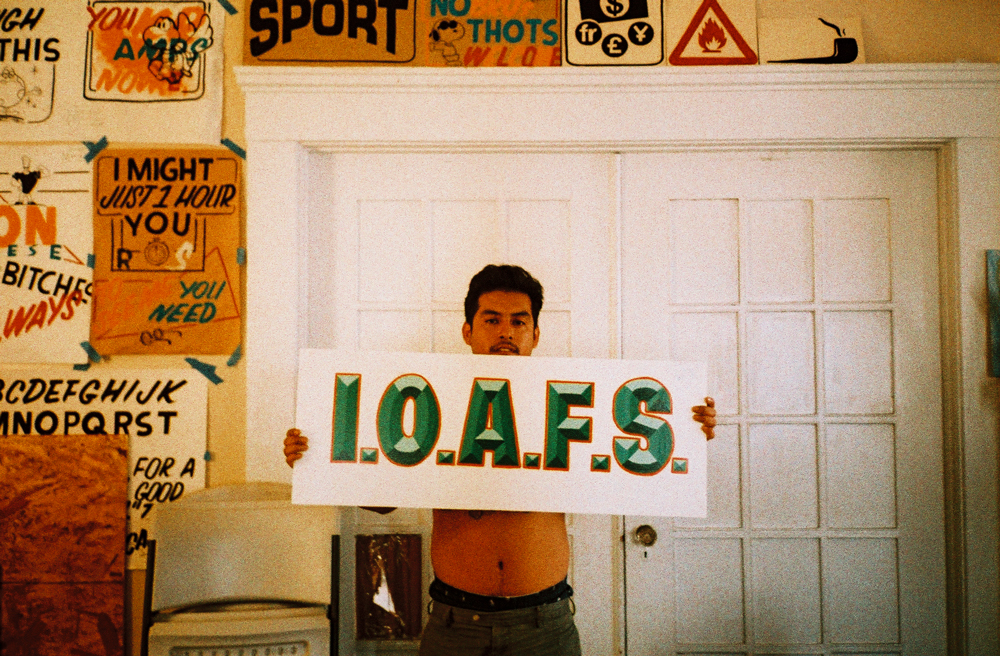 Sign painting is an American tradition that can age like wine if enough of us put a lens to its importance. There’s humanity in its services that is lost in much of today’s advertising. There’s simplicity in its craft that allows it to be “critiqued” and understood by all.

Minimalism is sweeping through the aesthetics of most cities – replacing any resemblance that sign painting once spoke for businesses and events. Cities are beginning to look like IKEA office buildings made by precisely-cut building blocks. There’s a culture being lost at the sake of efficiency and convenience; only to be replaced by things trendy and temporary.

We’re very obsessed with fast results these days. The idea of dedicating years to an aged craft puts fear into the mundane. It all really depends on how you view it though...

Jav Dolla has spent his entire life living, breathing, and reppin’ all that is Mid City Los Angeles. He is literally arm’s length and a scream’s distance from the community that supports him and shaped his entire lifestyle. His dedication to the art form of sign painting is his artistic means to giving back to what’s made him who he is. Another concept slowly fading through time..

As young Jav Dolla fills his Monday-through-Friday mornings at one of the last remaining Sign Painter classes in America at LA Trade Tech College; your office, storefront and blank walls await the sign painter’s touch. 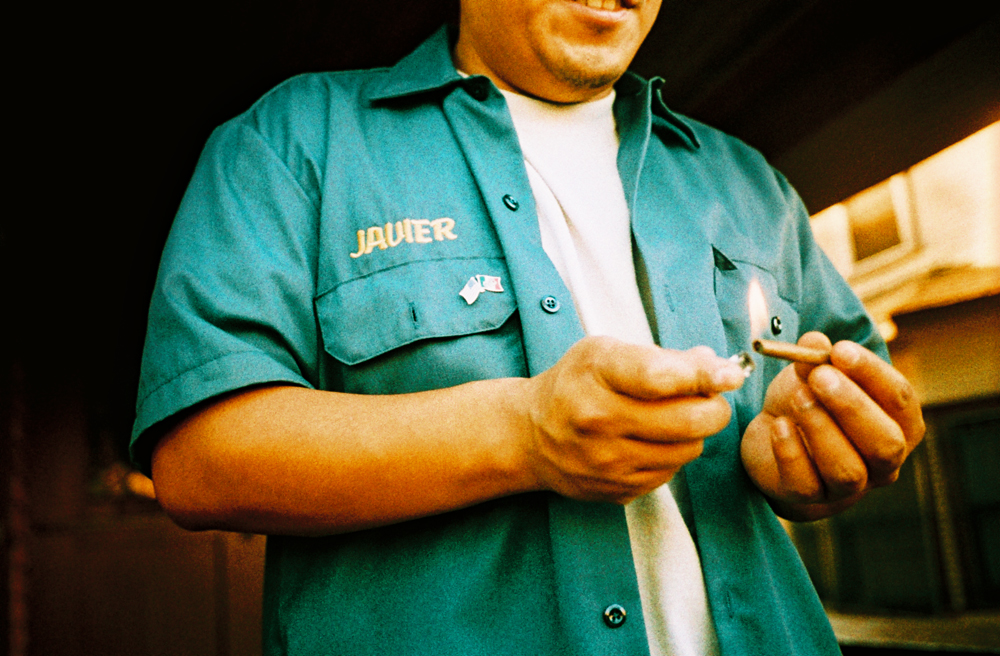 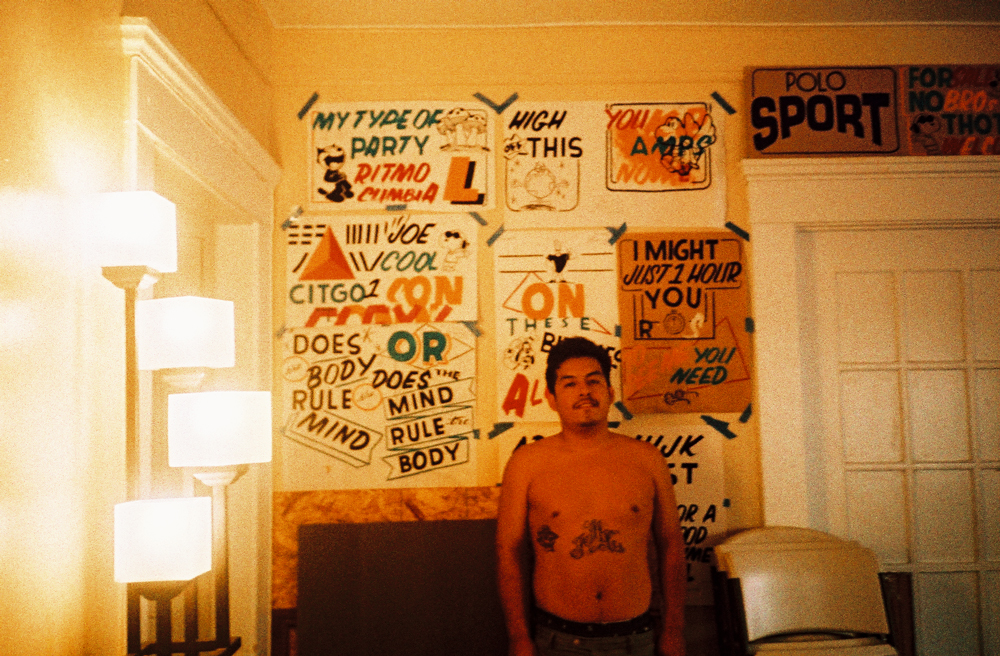