In response to our Color Bear tribute, as posted on Wednesday, reader Jason writes in:

“Just a little information about one of your tributes, which I love by the way,

The Ã¢â‚¬Å“Color BearÃ¢â‚¬ was actually an art project by Jeremy Wray in high school and was suppose to get used as a board graphic but instead got used as a company logo. I believe the story goes that the T-shirt for the board shipped before the boards and sold so through so quickly that they kind of flipped Jeremy’s graphic into a logo deck and adopted it to other riders stuff.

Either way, for those of us that knew Jeremy it was funny to see his little sketch make its way on to a board and then be synonymous with a pretty large company in 93′, and even funnier to see it still being remembered 15 years laterÃ¢â‚¬¦

I’m not sure if Jason’s story is 100% accurate, but hey, he sent it to me through the internet, and everything you read on the Internet is real. Here’s the original Color Bear that Jason’s referring to, and which we based our Rosewood Collection graphic off of. 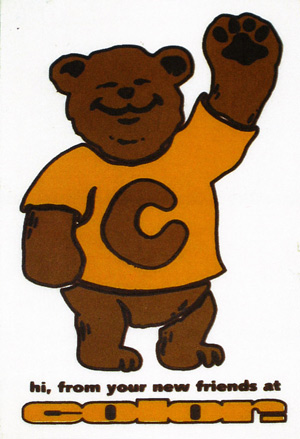