Street Artist Hueman on Her Fearless Work in Street Art

Hueman is fearless. Taking a career path in the art world can be one of the most difficult decisions made, as it’s often not the safest career choice or the most profitable – but it can be the most rewarding. Through sheer determination, hyper-focus, and a brazen attitude – ignoring any self-doubt – she has been able to succeed and share her talents with the world.

I caught up with Hueman to discuss her career thus far and the life decision to take the leap into the art world full-time. 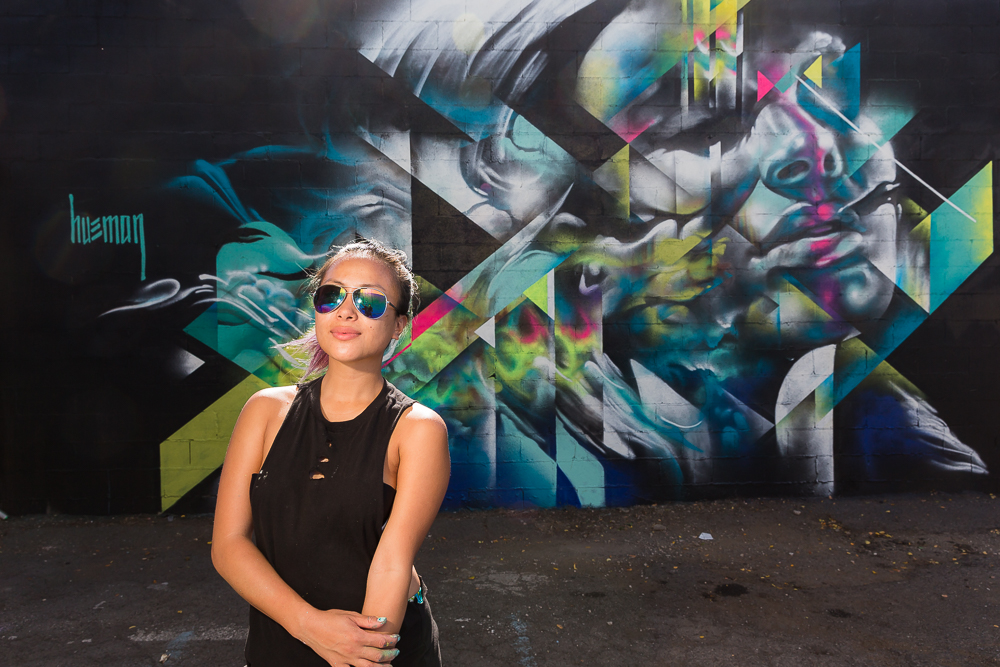 JOHN PANGILINAN: You’re based in the Bay now, but were in LA up til recently correct? Can you give some info your background and history?
HUEMAN: Correct. I just moved my studio to Oakland the other week. I grew up in the East Bay, and left for LA in 2004 when I went to UCLA for undergrad, where I studied Design | Media Arts. I’ve lived in LA for all of my adult life, so I’m excited to get reacquainted with the Bay as an adult.

How did you begin you career in art? Has this transitioned to a full-time career for you?
I don’t remember a time when I wasn’t drawing. I’ve been creative since I was a baby. I was invited to be part of my first gallery group show when I was 18 years old, at Build Gallery in San Francisco. They had seen my work on my website and sent me the invite, and before then, I had no knowledge of the art world or the gallery scene. I studied design in college because I thought I wanted to get into advertising or branding, and also I just didn’t think that it was realistic to pursue a career as an artist. I was a freelance graphic artist all throughout college and in my senior year I started up my own branding and design agency and realized pretty quickly that the agency lifestyle wasn’t for me.

Somewhere along the way, after a year-long bout with depression, I started painting on walls, and that’s when a light switch went off in my head. For about 3 years now, I’ve been working as an artist full time. 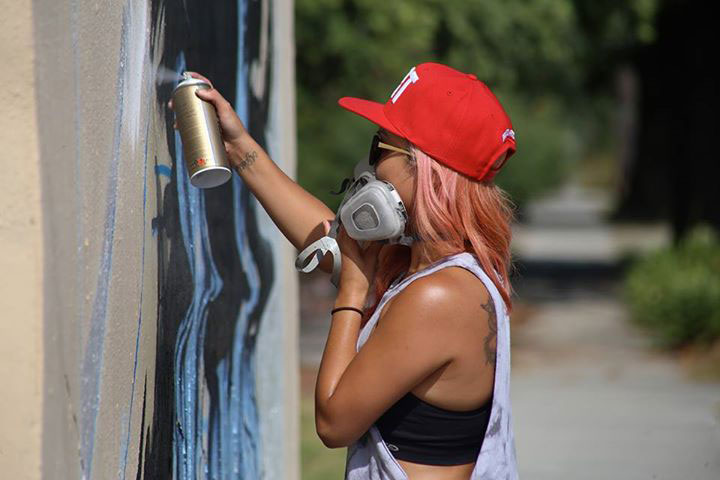 What opportunities has your art provided to you?
That’s a question with a really big answer, but to put it simply, art has opened up the world for me… I’ve been able to make money doing exactly what I love, and it’s something I’m thankful for every day. It’s given me the ability to travel all over the world and meet so many people, many of them are folks I look up to. I’ve also had the opportunity to work with some really amazing brands, like Nike, Converse, The North Face, and Heineken.

You’ve said your work is about the perfect balance between different factors (abstract/figurative & beautiful/grotesque), how do you know when you’ve found that perfect balance?
It’s a science. When I’m working on a piece, I’m constantly adding and subtracting different elements into the mix until it feels right, until all the parts work in harmony. I’ll look at the overall composition and it could be as simple as adding a line here, or removing some texture there. Many times I’ll decide that the piece has too much softness and too much flow, so I’ll cut it with a sharp edge. The organic, soft parts are like muscle tissue and the lines and solid shapes are like the skeleton holding it all together. 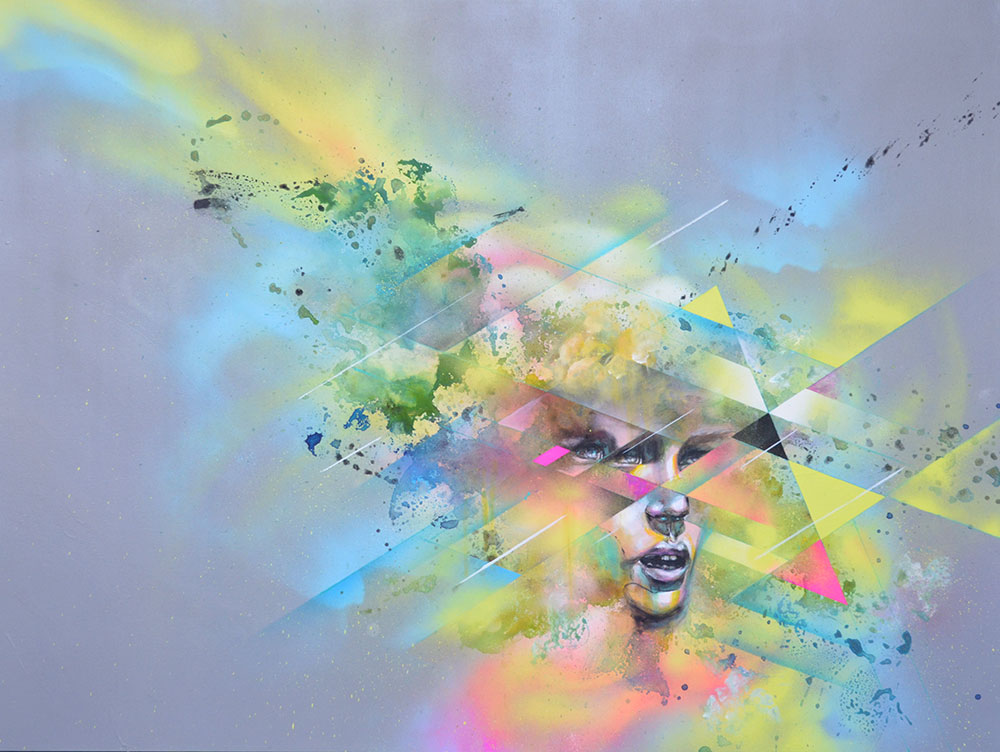 Everything about your pieces gives off an ethereal vibe, but particularly, your use of color makes it feel otherworldly in an extremely modern sense. Do you approach your piece knowing what colors you’re going to use, or does it come to you while you’re painting?
I have some signature colors I tend to use in most every piece, but some days I’m just feeling certain color palettes more than others. If I’m working on a wall, I’ll take into account the surrounding environment. So yeah, sometimes I do approach the piece with colors in mind, sometimes I don’t. But color (or the rare lack of) is always the most important part of the piece to me. 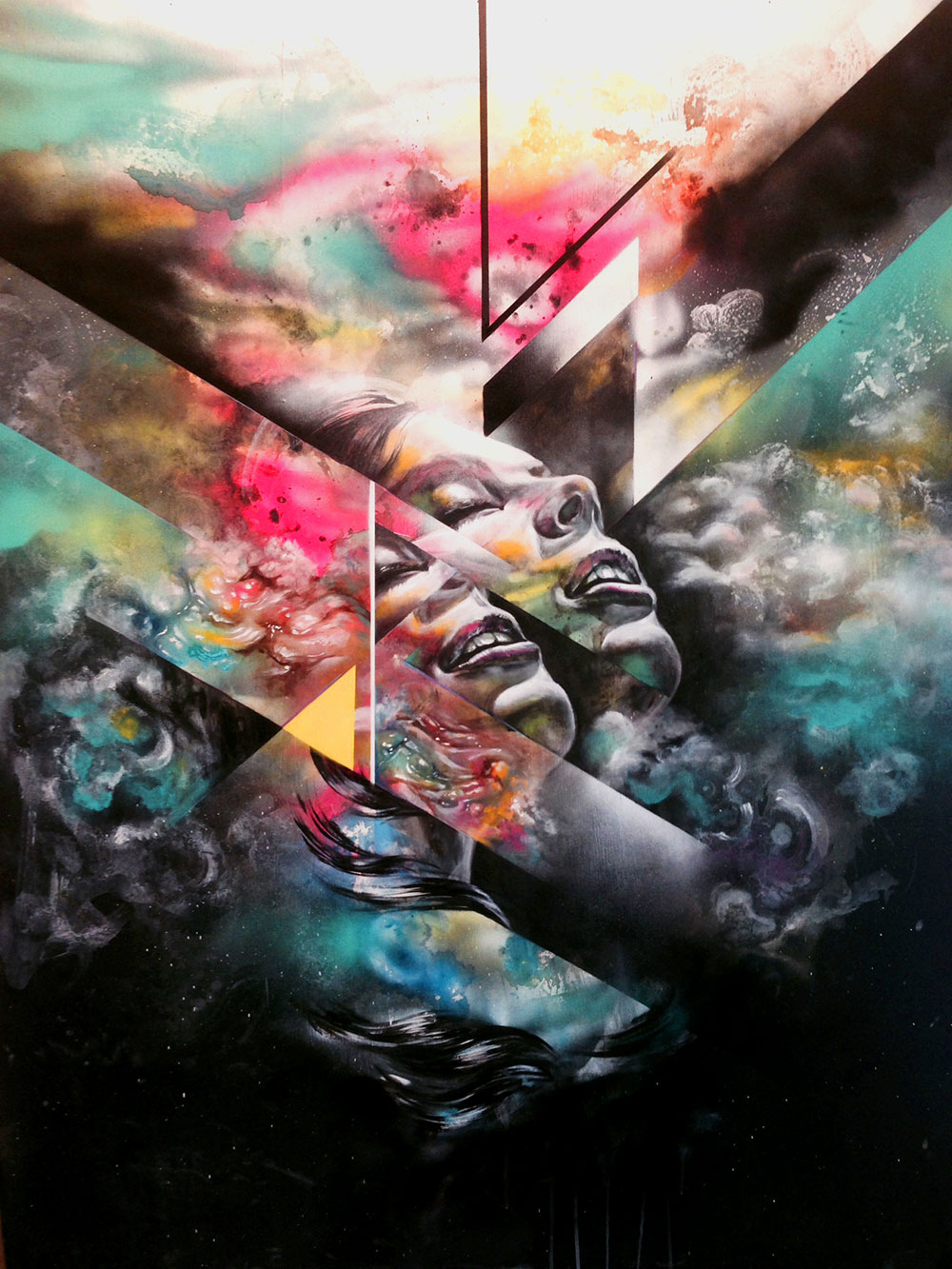 What is your creative process?
I have two processes: one for murals, and one for pieces I make in the studio. Both are pretty similar, both involve freestyling: it’s all a combination of chaos and control.

With studio pieces, I’ll just go to town on a bunch of different canvases all at once. I’ll spray paint, splatter around some acrylic, and make a bunch of abstract pieces. Then I’ll step back and let the splatters dictate the way the foreground is going to look. I’ll find parts of faces, and carve those out and refine them.

I approach murals differently because I’m working with a different schedule. I’ll have only a few days to work on a wall, so I’ve gotta show up with at least some sort of plan. Most of the time I’ll create a basic composition sketch, it could be as simple as creating intersecting lines and shapes, or figuring out where I want to place a face. That’s the skeleton I build around. I’ll freestyle with a spray can around this skeleton, then I start cutting in with more lines and shapes and refining things here and there. 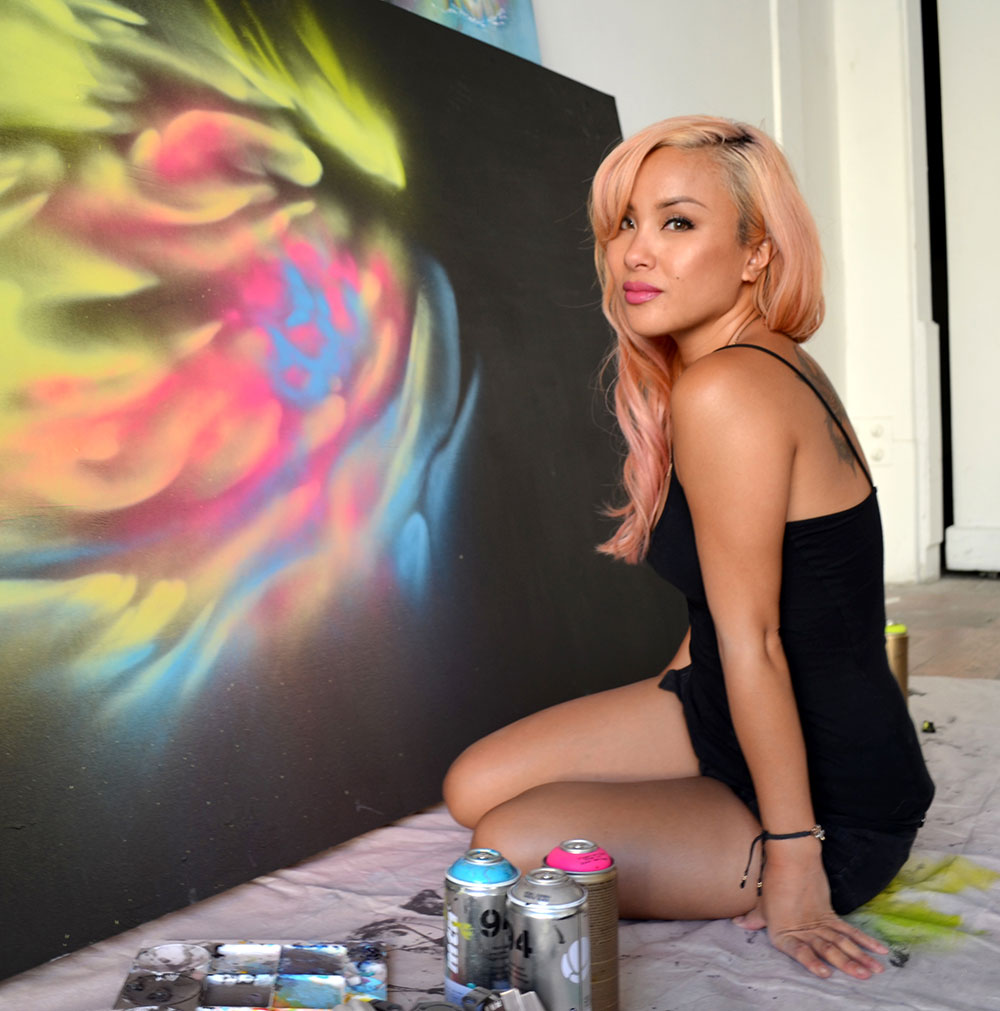 Was there an event or a moment where art went from a hobby to a profession? Could you walk us through that?
I’ve shown my work in galleries since 2004 and was pursuing art part time, but I never seriously considered making it my career until a few years ago. In 2012, art opportunities really started opening up for me and I was getting really busy, but I still had a day job. I was working as a designer at Playboy TV for a while, and as time went on it was getting harder and harder to balance work with art life. By mid-2013, I was gearing up for my solo project Ritual at Think Tank Gallery, and I was painting on the walls when I got the call that my entire team at Playboy was being laid off. I remember getting off the phone and sitting there for a moment, bummed out but extremely excited. I knew that this was my opportunity to fully go after the art thing and not look back. And I haven’t since. 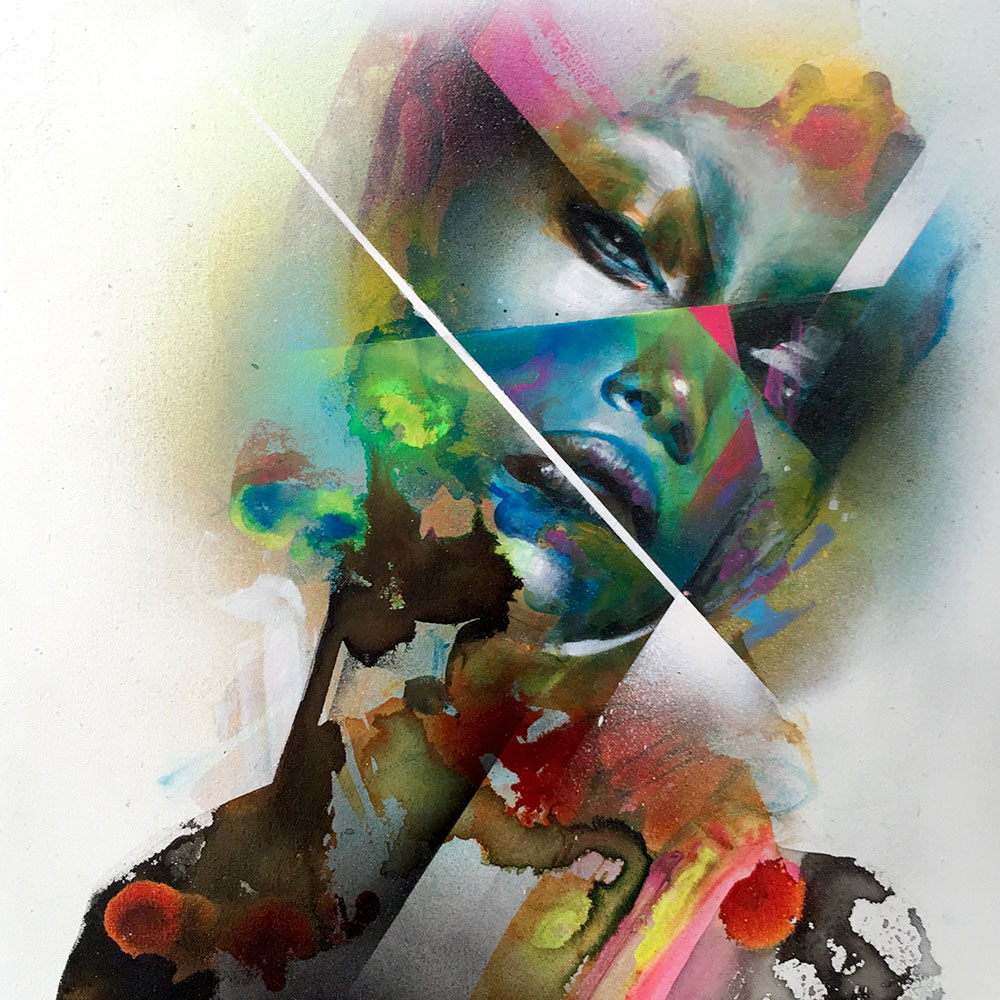 I read that you set up your paintings to have a hidden, “read between the lines” meaning to them – can you elaborate on that?
“Between the Lines,” was the name of my solo exhibit last year at Project Gallery in Hollywood. It’s a play on the phrase, which talks about finding an alternate or deeper meaning, but it also plays into the fact that I use a lot of lines in my work. As humans, we’re designed to seek meaning. When I’m working in the studio, I’m staring at these abstract pieces and looking for meaning in the splatter. I’ll paint what I see, which is sometimes a face, or a nose. Sometimes, when I look at a piece years later, I’ll find something new, and sometimes pieces take on new meaning. The way I read the paint splatter is similar to the way someone would look at a Rorschach ink blot in a psychologist’s office and see a monster or a butterfly. So in a way my work is like a conversation with myself. 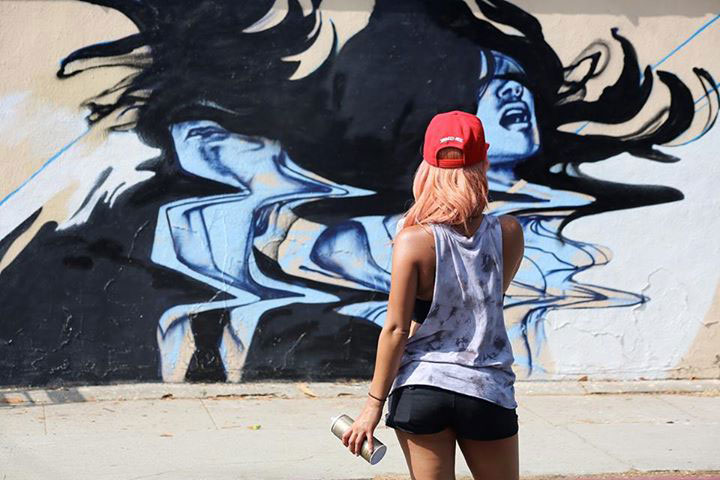 What current and future projects do you have in the works?
I’’m co-curating a group show at Rocha Art in San Francisco [this month], “Wander & Wayfare.” It’s a group comprised of 8 amazing street artists that have all met while traveling and painting. Oh, and they all happen to be badass females.

I’ll also be painting a mural with Madsteez for Pow! Wow! Long Beach at the end of June. I’ll also be painting in Cozumel, Mexico, this summer with Pangea Seed for their Sea Walls festival to bring awareness to pressing environmental issues affecting our oceans. And I’ll be working on an entirely new body of work for my solo show at Mirus Gallery this September. 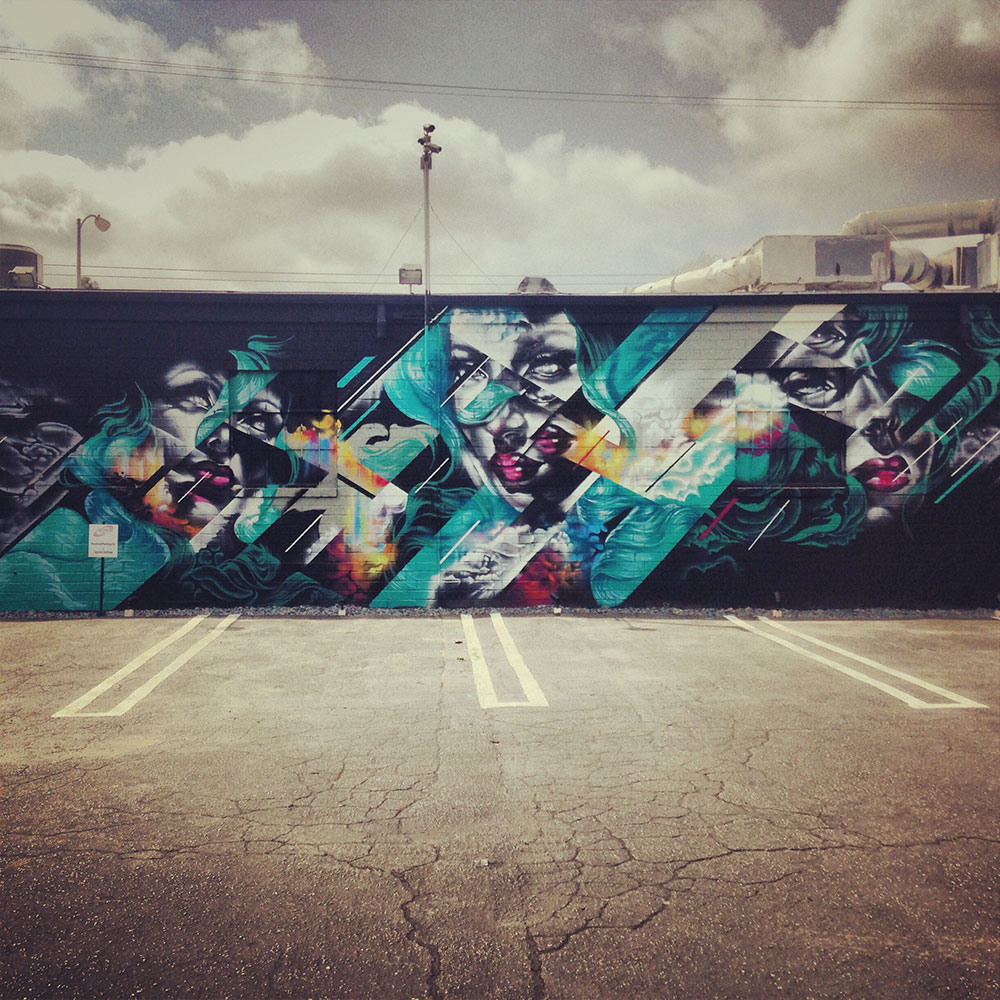 Sounds like a very busy year ahead. What advice do you have for younger aspiring artists that want to make the transition from any day job to pursuing art full time?
It’s difficult, or at least a very slow process, to try and pursue a career while having one foot in the door and one foot out. If you’re serious about making art your full-time, just jump straight into it, especially while you’re young. It’s only when you throw yourself into the water head first that you find out if it is or isn’t for you. But this career is only for the extremely passionate. If you’re getting into art to be rich, you’ve chosen the wrong profession.

WHAT HAPPENS WHEN STREET ART MEETS A TINY VILLAGE IN VANUATU

From a BFA in Advertising to Full-Time Artist, San Francisco's Chad Hasegawa