What do you get Tyler, the Creator for his birthday? In 2013, that’s what Mariella Angela and her friends asked themselves while hanging out at Odd Future’s now defunct store on Fairfax. One of her friends, a fellow Tyler fan, had a suggestion: Why not make him a painting? At the time, Mariella—who now sells her paintings for more than she could have ever imagined—wasn’t feelin’ the idea.

“I can’t paint,” she remembers telling herself. “It was out of the question.”

Back home in Norwalk, 20 miles away from Fairfax, Mariella stumbled upon a small pack of oil paints while cleaning out her room. It had been left over from two paintings she did for a high school elective the year before. Was it a sign? “Maybe I should do it,” she thought at the time. So she gave it a shot. “I ended up painting [Tyler] in the goblin mask,” she says while relaxing in her home studio. “It took me more than a week to do it and it was this little 10 x 12 panel.”

As if the painting wasn’t enough, she also baked Tyler a cake. Then, with her mom in the driver’s seat, Mariella hit the road, hoping to see the rapper back at the OF store. Sadly, he wasn’t in. A clerk said she’d make sure he got it, but Mariella was sad. “I wanted a selfie,” she remembers saying while heading back home. Then, it happened.

“The next thing I know, he posted it on Instagram,” she says, still beaming with pride. “I was like ‘Oh my God! He got it!’ I was still super starstruck, screen-shotting everything and crying. The next time I went to the store, I was sitting there and he comes up to me like, ‘Dude! The painting’s up on my wall! The cake was good.’ Then, he was like, ‘Dude. This is an oil painting right? Oil paint is the hardest paint to work with. You have serious talent... You should continue this.’”

A hero’s encouragement goes a long way. Over the next year, Mariella continued painting rap portraits and sharing them online. By 2014, her largely self-taught hobby became a passion, and by 2015, she was having art shows in L.A. surrounded by fans and even some of the artists she painted. I drove down to the 21-year-old artist’s home studio to talk about her journey and how she’s been able to turn this moment with Tyler into a business and a newfound dream come true. 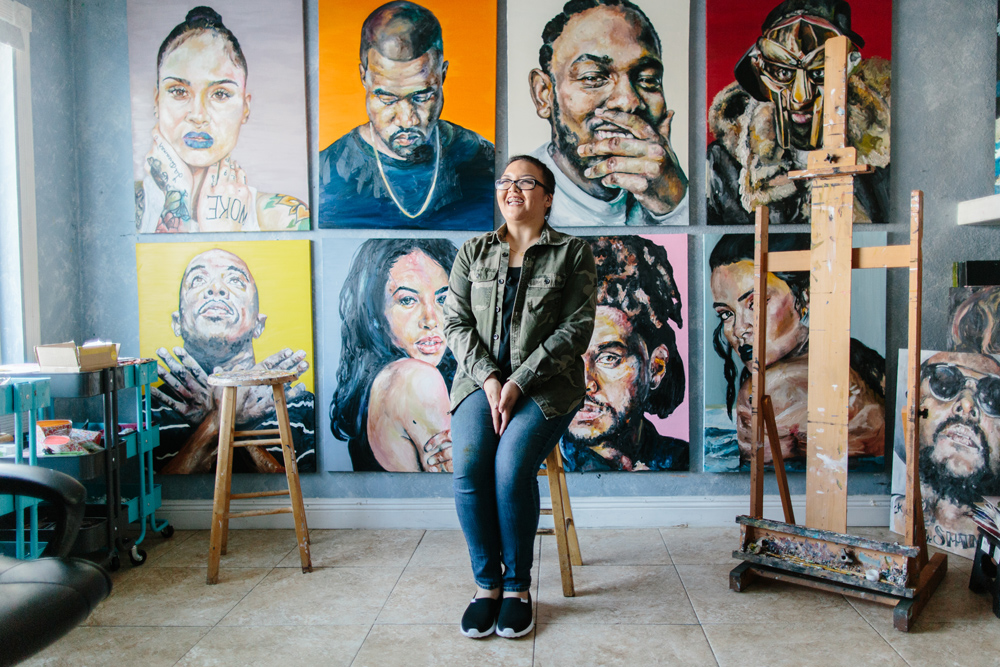 “I remember how it all started.” – Hi-Tek

At 9 years old, Mariella says she got her first rap LP, Eminem’s The Eminem Show. More accurately, though, she had her 18-year-old cousin buy it for her. “I wanted the explicit version,” she explains. “I had to tell him, ‘Please, please, please. I need this. I can’t ask my mom to buy it. Can you go to the record store and get me the CD?’ He was just like, ‘I don’t know, man. Maybe you should wash my car.’ I was like, ‘Is it worth it?’ I ended up washing his car.”

Music’s still just as important to Mariella now as it was back then. Today, all of her art focuses on artists who’ve impacted her life in some way. “That’s what resonates with me,” she says. “I’m not painting for anyone else. All of these paintings are just for me. I want to paint something I love, something I’m passionate about—and I’ve loved hip-hop my whole life.

“In my own weird way, I feel like they were speaking to me,” she adds. “You listen to their music and it hits something. There’s some connection there. Me painting them was my way of saying thank you for this music. Thank you for impacting me in some type of way.”

Some of those artists, including B-Real, Blu, and Exile, have also shown Mariella love. Yasiin Bey, formerly known as Mos Def, for example, found her on Instagram and DM’d his praise. “I cried,” she remembers. “He just contacted me because I’ve painted him literally like seven times and I guess he stumbled on a picture of my wall. Two of his paintings were up and he just contacted me like, ‘God bless you and your talent. These are amazing.’ He signed it ‘Yasiin.’” 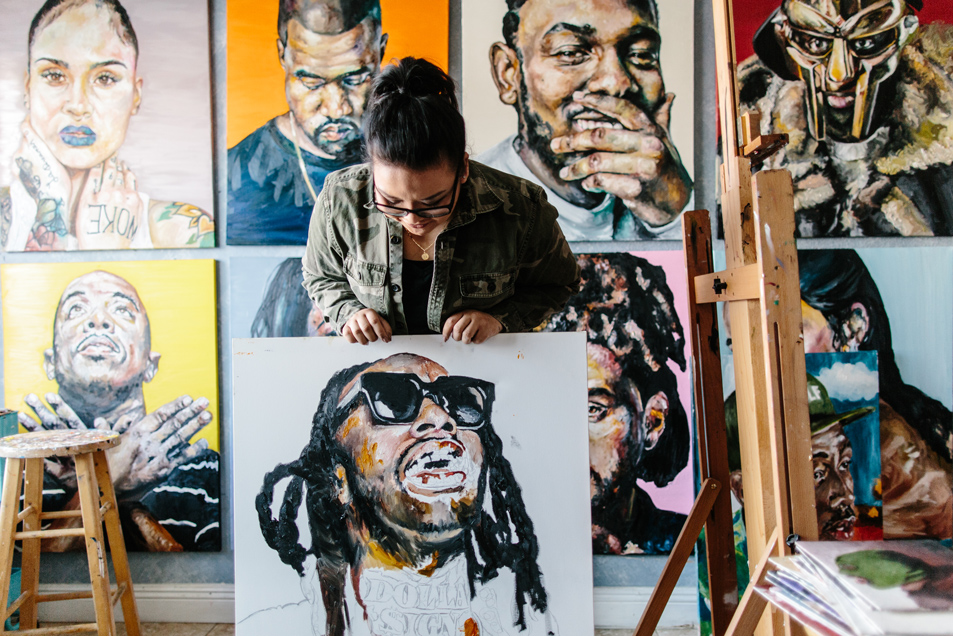 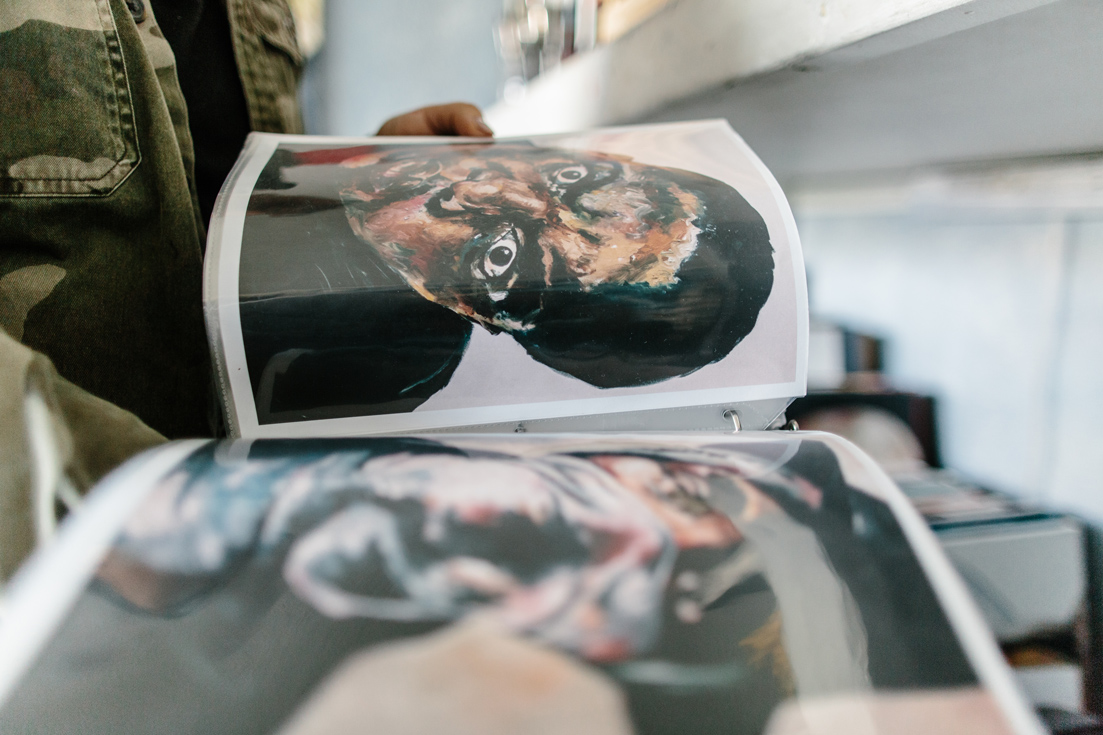 “With this brush, I’mma paint your story.” – Wale

Although hip-hop seeped into her heart at a young age, a passion for art didn’t. “I painted in high school [but] it was just assignments,” she says, adding that she never cared much about that world. “I was super ignorant about painting. I didn’t really know anything. A lot of people used to compare me to [Vincent] Van Gogh because of the brushstrokes and I didn’t get that. I was like, ‘Don’t compare me to him. He cut off his ear!’ I was super ignorant about it.

“It wasn’t until became more interested in art where I started looking at other artists like, ‘Oh my God,’” she continues. “Margaret Kilgallen, a super feminist painter. I’m obsessed with her. She does drawing more and it’s completely different from mine.There are no similarities at all, but I like what she stands for. She always says that the reason she paints is because she wants people to know that they can do it too and if she knows that one painting inspired someone else to go out and try to paint, then she did her job. That’s kind of what I try doing.”

She’s definitely doing that these days. Not only is she hosting art shows around L.A., she’s also shipping artwork around the world, being interviewed by the likes of B-Real, and inspiring kids in the process. Look at her Instagram comments and you’ll see some samples of that. She gets everything from admiration (“Ur work is a dream”) to requests (“I want u to do a painting of my daughter”), and she’s just getting started. 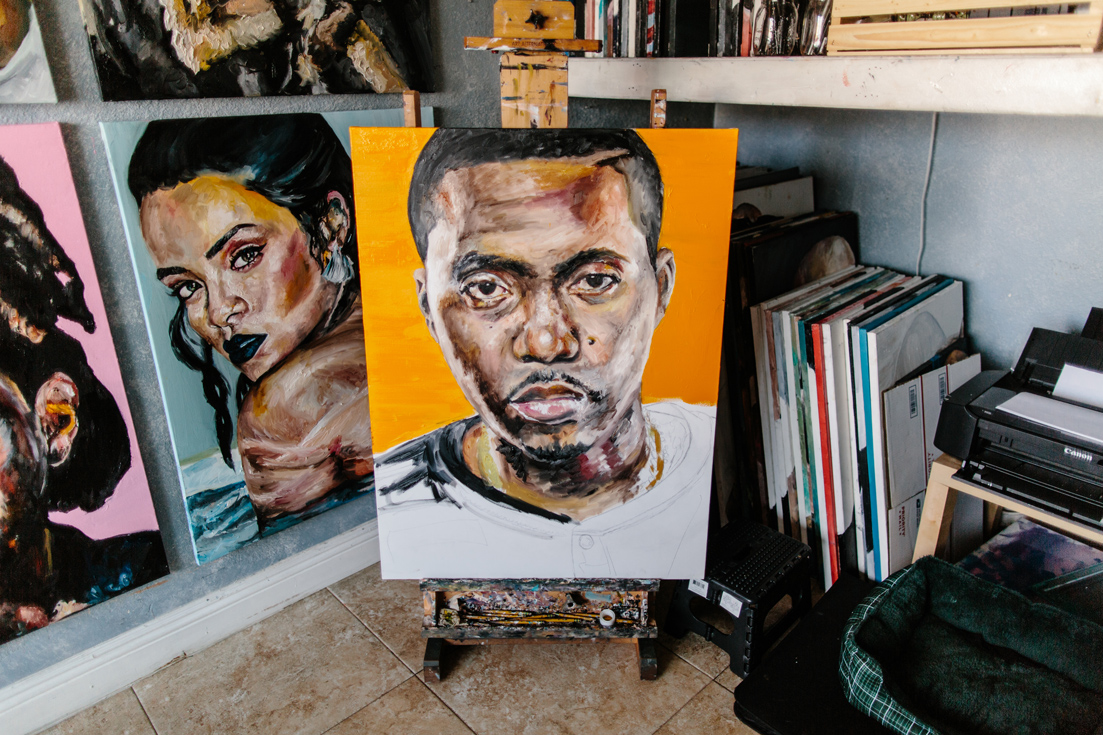 “And I appreciate how you raised me.” – Tupac

Artists (both painters and rappers) aren’t the only ones inspiring Mariella, though. She’s also clearly moved by her parents. While they might not have copped that Eminem album for their 9-year-old in 2002, they’re definitely down with her hip-hop love now. “[They’re] supportive parents,” she says. “They never ever told me, ‘You shouldn’t do this.’ They never told me that and I’m so grateful because I feel like if I ever heard them say it, I probably would have listened because I’m super close to my parents. I value their opinion. I’m super thankful that even when I knew I wasn’t good, they were like, ‘You should do this.’”

“Once they saw that I became more serious and wanted to pursue something more [with art], that’s when the conversations became a bit more serious,” she adds. “They were like, ‘What are you expecting to get out of this? Are you gonna leave school?’ I was like, ‘No, I’m still gonna be in school. I’m gonna do this in my spare time.’ You have to secure them. I come from an Asian family and it’s super traditional. They’re super understanding, but the rest of the uncles and aunts would see it like, ‘What is she doing? Why is she doing this?’ But my parents have always been super supportive.”

Her mom was there when we conducted this interview and she can’t help but smile when talking about her daughter’s work. “I am so proud of her,” she says. “I’m so proud of her talent. She’s very humble and I love what she’s doing. It makes her happy and I’m so proud.” 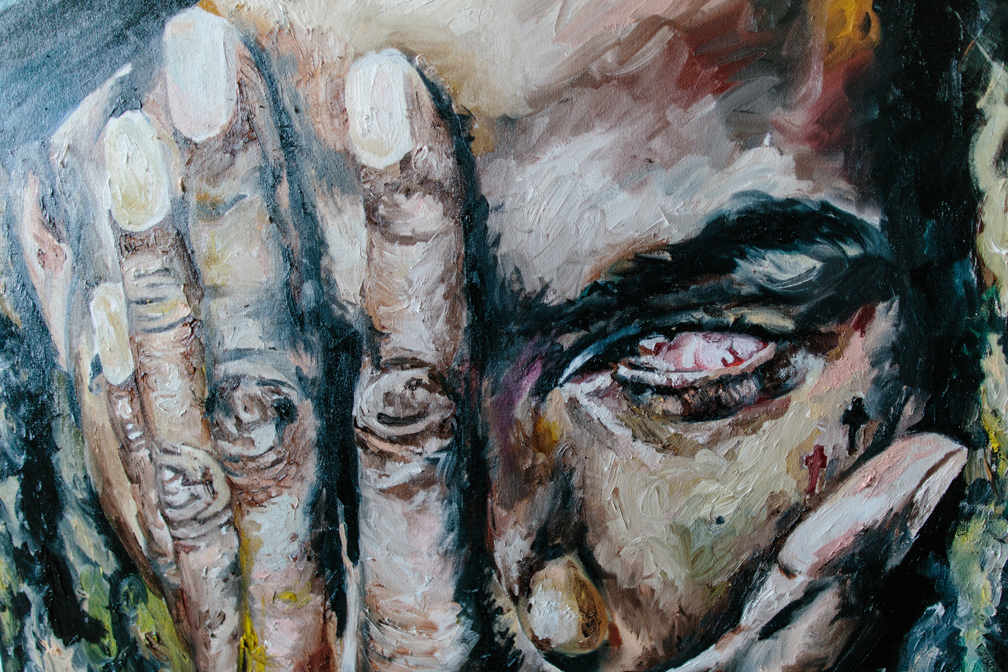 Mariella’s parents didn’t actually have to worry about her dropping out of school. Instead, the young painter decided to study business. “People have dreams and passions, but that can only take you so far,” she says. “You need to know the logistics. You can’t go into a bank and be like, ‘I want a business loan because I had a dream about it last night. Help me accomplish this dream.’ Growing up made me realize that I do need to figure these things out and learn more about it.”

As she continues studying and learning about the business side of things, she’s still keeping art at the heart of it all. “I want to open a gallery some day,” she says. “And do something that will not only support me and my family, but will also give back to the community.” 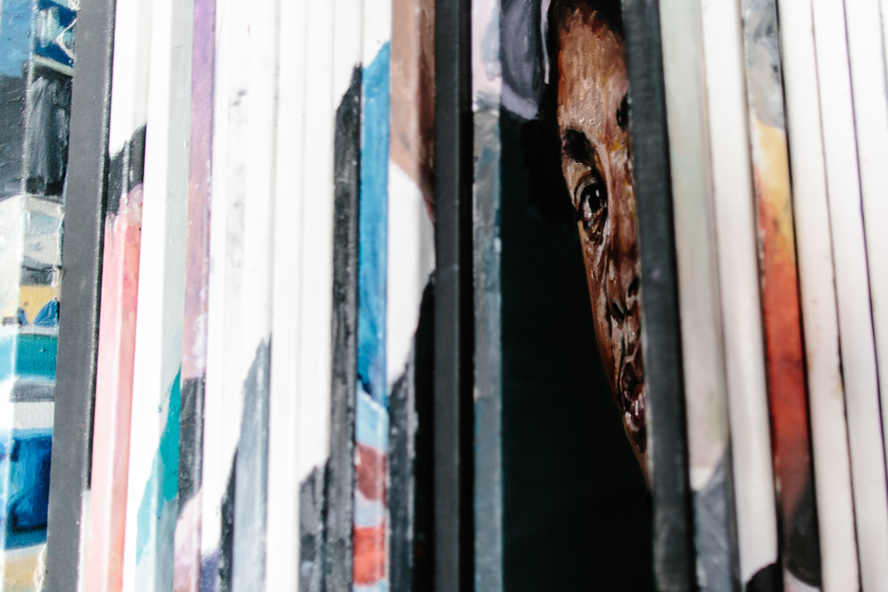 “Be a star out your gang and aim above the clouds / And if you miss, you’ll at least be amongst your own crowd.” – Blu

As Mariella talks about her journey, it’s hard not to look at one of her Tyler portraits that sits nearby, one she says she’ll never sell. That’s because, in many ways, the Odd Future MC helped inspire this whole voyage, even if he did it from afar.

“I love his music,” she says, when talking about his inspiration. “But what I think what made me admire him most was his work ethic and how he came up. When I met him, he was 21 years old. You know his upbringing and for him to build this entire empire, it made me believe, as an 18, 19 year old, that age doesn’t matter.

“If anyone puts the work into it and works their ass off, it’s possible,” she continues. “You just need to believe in yourself, you need to work hard and dream and have endless possibilities. Seeing him grow made me realize that these aren’t things that happen in movies. This is real life.”