Got It Covered :: Iconic All-Over Print Moments in Streetwear History

In light of our The Hundreds by Aaron Kai collection, which was partly inspired by Streetwear’s bygone all-over era, we wanted to take a trip down memory lane when the gaudy style was at its peak in the street culture canon.

In a way, you could say that the all-over print design is like the swiss army knife of Streetwear. On many levels, it achieves myriad of different things. It’s equally gaudy, expressive, and cool at the same damn time. It makes you the biggest walking billboard yet, maybe the largest douche bag, but it always keeps people talking. That’s kind of the point of this, right? Leaving people with something to talk about. 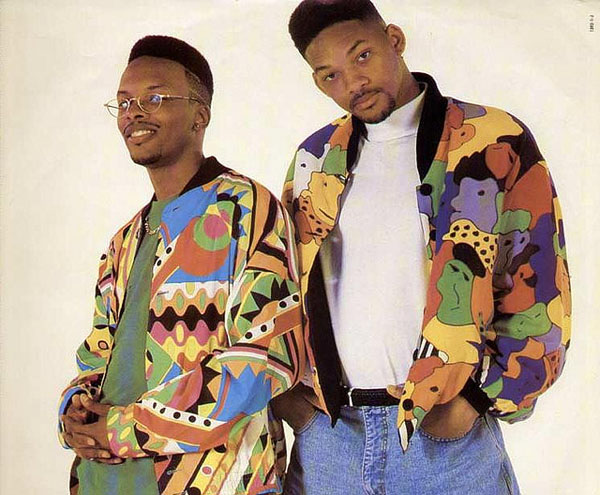 All-over print is a style that defined the mid-2000s age of Streetwear—brands like A Bathing Ape, Ice Cream/BBC, The Hundreds, and more popularized the print with a number of different designs. But its origins go back much further to nearly 20 years ago when the all-over print was worked into nearly every piece of cool clothing, from hats to tank tops to T-shirts, of course. Cartoon characters, NBA teams, and tribal designs adorned the clothing of the hip and savvy teens, and it was further cemented as the “it” thing by advent of hip-hop. I remember seeing it vividly as a child, on Kid N Play in the House Party series, and Will Smith on The Fresh Prince of Bel Air. The print had become synonymous with “cool,” and everyone had to have something all-over print. It was rebellious, and most of all, it was a part of hip-hop culture. 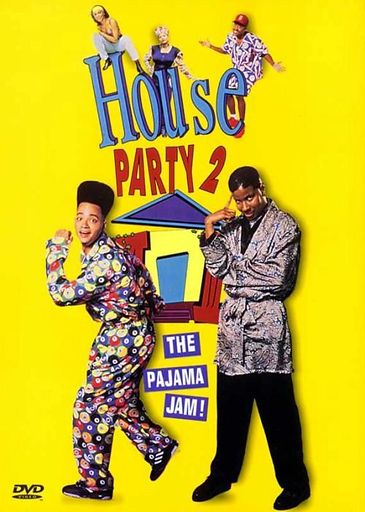 It’s funny that as trends changed, all-over print pretty much never really went away. Whether it was the iconic BAPE Camo or The Hundreds paisley print, Streetwear has always paid homage to the Urban culture that helped incubate it. Even as people get older and move on to more clean styles—we’ve all had our all-over print stage. Let’s rank some of the most iconic all-over print periods in Streetwear history:

It goes without saying that the BAPE all-over camo is effectively one of the most iconic prints in clothing, much less Streetwear. Making camouflage a fashion statement and not a means of survival may have seemed unheard of at the time—but essentially disappearing into your clothing as a disguise was an unspoken theme. The BAPE Camo has spurned a lot of offshoots and spin-offs within BAPE’s own line, but the OG remains a fan favorite—everyone from Pharrell and Lil Wayne to now Future, Travis Scott, and Metro Boomin have kept it poppin’ throughout the years. 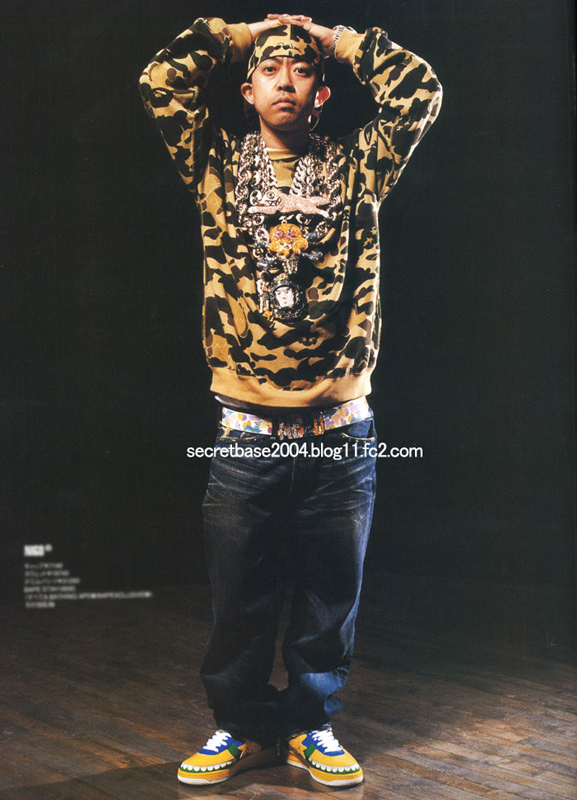 The classic paisley print is simple in its design—adorned on bandanas and clothing, it has been around for centuries, with roots stretching back to Persia. Much later, in the mid-’60s, its association with music and fashion during the psychedelic era, in large part due to The Beatles, catapulted its popularity. The Hundreds’ all-over “Paisley” print, however, grew the concept past its antiquated design and brought it to the present. Released initially in two colorways of black-on-black and “white” on black, it was advertised as customizable with supermarket dyes like Rit and sold out immediately, crashing the The Hundreds website. Read about how the “Paisley” release ultimately funded RSWD in Bobby Hundreds’ write up HERE.

It is all-purpose, eye-catching, and just plain cool. Even deeper than that, Paisley represents the brand. It represents family.  It’s a testament to timeless hard work breeding a timeless look. 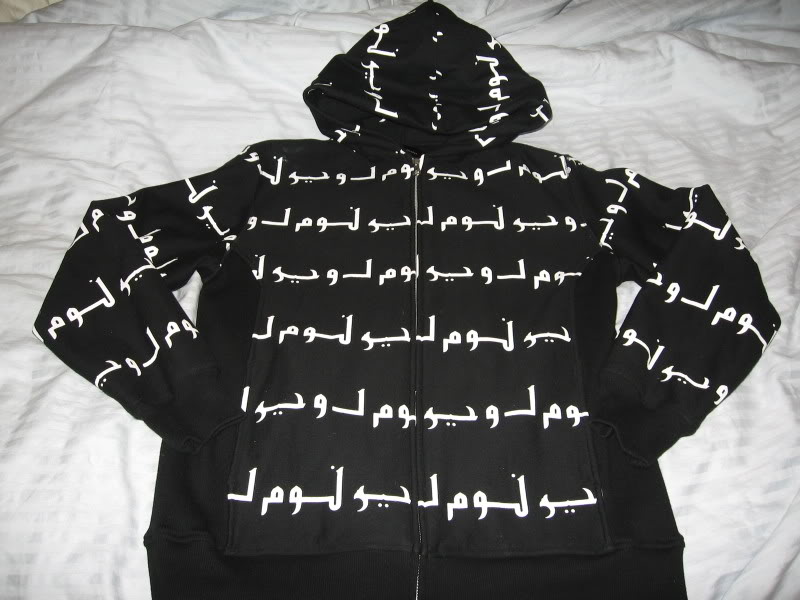 Considered the all-over “Holy Grail” by Bobby Hundreds, short lived Streetwear line Nom de Guerre pushed the normal conventions of Streetwear to the edge. Made up of a four man team that used Japanese craftsmanship and even edgier iconography on their clothing, Nom de Guerre’s most controversial was their “Arabic” all-over print, which hit right at the height of Islamophobia post 9/11 according to Jeff Staple to Complex in his “Greatest Streetwear T-shirts of All Time” piece. Instead of shying away from the inherent fears of most Americans, Nom De Guerre made this iconic design a conversation piece, and a sign of solidarity. 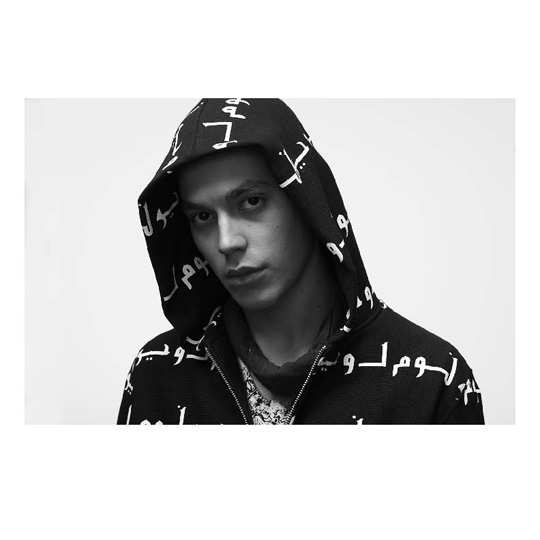 “To put out a shirt in Arabic at that time was so blasphemous. It’s like putting a swastika on a shirt in that sort of political climate. Then to do it as an all-over print T-shirt, again, it was streetwear saying, ‘Fuck you. We’re gonna do what we want to do, we’re not gonna do what you say. We’re actually making you have a conversation about this.’ This shirt probably spawned so much conversation, and that’s what was dope about it.” -Jeff Staple

Possibly a shoo-in for the NRA’s most popular Streetwear piece, Rogue Status’s “Gun Show” print took the world by storm in the mid-’00s. Plastered on Skateboarding mogul Rob Dyrdek’s “Rob & Big” show for a large part of its run on MTV, the print has more guns than a Call of Duty game on it and came in a variety of different colors. Rogue Status tried to relive the magic with a number of different prints, but the reason that “Gun Show” was so popular is that it was an instant conversation piece that Jeff Staple said was “important for street fashion to do.” Walking to the grocery store, or attending a family outing turned the wearer into the elephant in the room. Just how we like it.