Based in Los Angeles, multimedia artist Geoff McFetridge, absorbed the visual aesthetics of the ’70s and ’80s and invented his own language, influenced by early skate culture – his own visual translation of ideas, thoughts, and moments. Working in graphics, animation, paintings as well as on illustrating objects and furniture, he has managed to make his work accessible by simplifying this language using elegant line drawings and paintings. His work can be “read” by everyone, as he invites the viewer to participate in the reading. He refers to his work as a mental triggering stimulus, an image provoking our senses providing us with a framework for possible interpretation. He prefers to invent the images in his work rather than copy a scene or image he encounters in real life, or often he re-interprets a scene by approaching it from another angle. His block color paintings give space to the figure by reducing it to their simplest, basic form. It seems like the artist is trying to discover the archetype for each of the images, the human figure and object, while at the same time, including a small twist to the story.

Geoff has been active in the global creative world and amongst his peers, since the time he was the Appointed Art Director of Grand Royal, the Beastie Boys magazine at the age of 24, and establishing his own company, Champion Graphics, from 1996 until the present. He is a founding member of The Directors Bureau alongside Mike Mills, Sofia Coppola, and Shynola, and is one of the Beautiful Losers. Geoff has worked with clients as diverse as furniture designers e15, Spike Jonze for the film Her where he designed all the graphics and interfaces for the film, the Standard Hotel, and Patagonia. His deceptively simple illustrations serve a bigger mission of providing us with the task of thinking through complex concepts, while at the same time offering us a sense of comfort and intimacy. 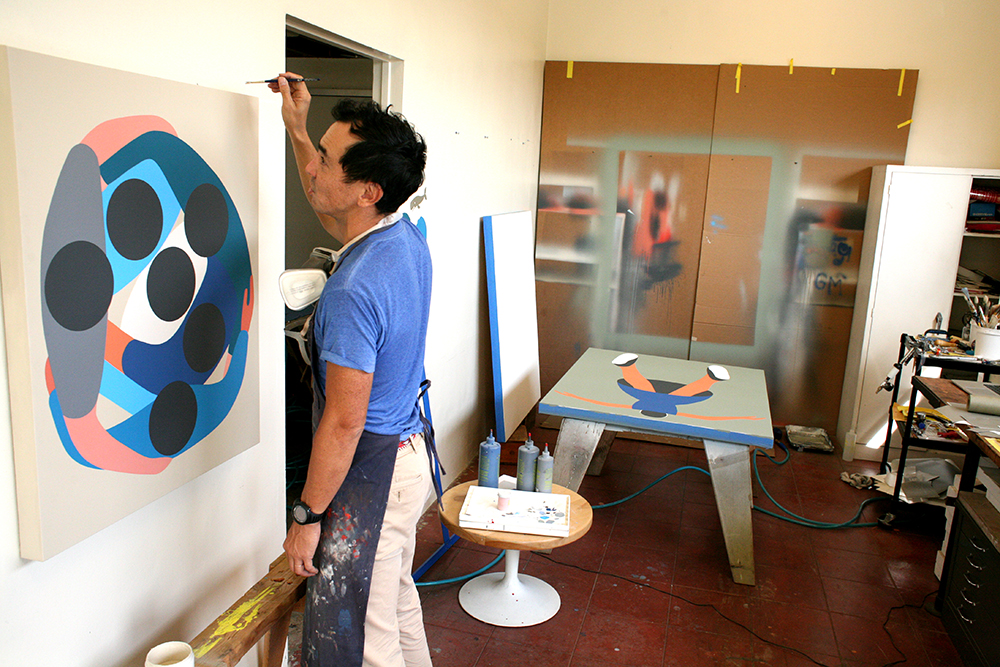 TASOS & MARINA: What is your relationship with nature?
GEOFF MCFETRIDGE: I guess you could say I prefer to be outside all the time. I like to be hot, I like to be cold, I like to get soaked with rain and I like being in the ocean when the sun is going down. Now that it is winter, I often run home from my studio at night through Griffith Park and I can hear the pitter patter coyote footsteps behind me. I like that, even…

So, making art is generally an indoor activity, but definitely my interests are outdoors. I don’t go to bars... I have a lot of hobbies.

You’re running Champion Studio, how many people work with you and how do you manage each project with your co-workers?
My studio is really just me and an assistant. It has never been more than that over the years. To run a studio in this way means I can change what is happening in the studio very quickly, and what I can take on is very narrow. Even with a few things going on we are very busy. I like to be super involved in projects, to be a part of every stage. So the growth of the studio is more about creative growth, rather than scale. Champion Graphics is about inner space. 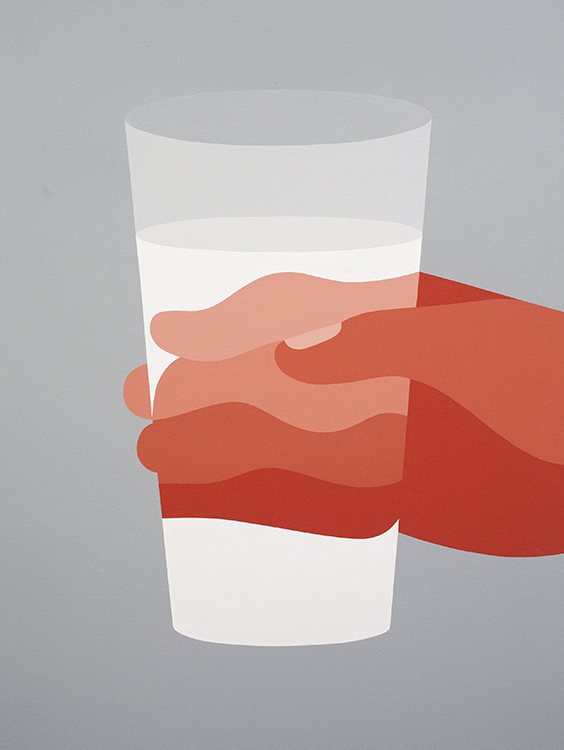 Working on the movie Her, amongst others you also designed the map of Los Angeles transit system of the near future, did you review your relationship with the city when working on this project?
Yeah. I was able to reflect back how I felt about the city, and the future. At times living in Los Angeles, you feel like you are living in the future. We are very open to trends, and accept both utopian and dystopic ideas with ease. For example: When something like “Cold Pressed Juice” appears, it will literally be on every corner, and all your friends will be drinking it. At the same time, everyone will start getting their catalytic converters sawzalled off of the bottom of their cars at the same time.

“SKATEBOARDING FILLED A GAP IN MY LIFE THAT I CAN’T IMAGINE WHAT I WOULD HAVE FILLED IT WITH IF SKATING DID NOT EXIST.”

I am an optimist and Spike made it clear that he wanted the future to be nice, and not full of complicated tech-y mystery. So it was a difficult project, but something I was suited to. A big part of the project was the design of all the interfaces on the screens. In futuristic movies, the screens all look the same, they are clear and covered with green text and holographic gibberish, (Minority Report, or Iron Man) that is the type design I was pushing back against. That is just designers throwing out complexity instead of being decisive about a tangible.

So with that project, I was doing what I try to do with all my work, be very clear about saying one thing rather than be hazy about 10 things. 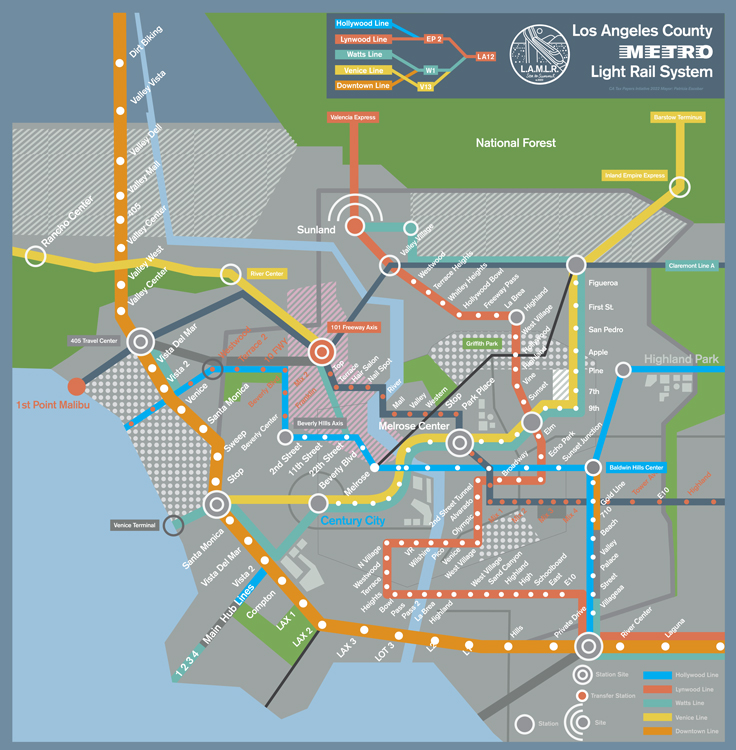 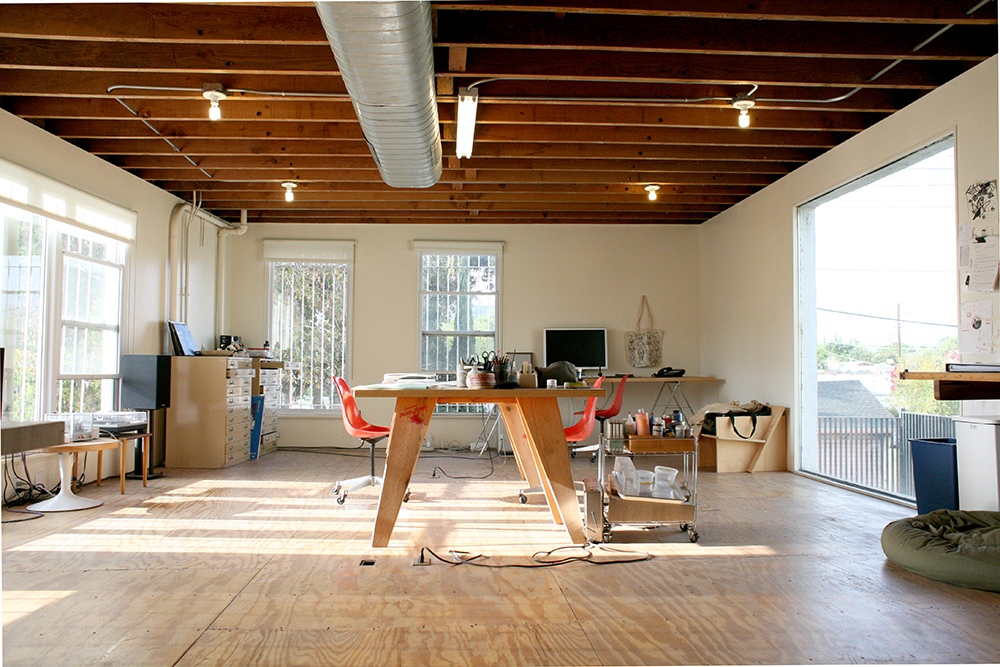 Where do you draw your inspiration from?
It is only recently that I realized that much of my inspiration comes from working with clients on projects. These projects are usually very open but there is back and forth with creative people, and I like that back and forth. I like to take on challenges and have to deliver, and ideally exceed expectations. So this might not be exactly inspiration. I have referred to it in the past as “momentum” but it is a lot like inspiration.

I also read a lot. I just put down Paris Trance by Geoff Dyer. HIs book Out of Sheer Rage is an amazing book about creativity, and producing work. 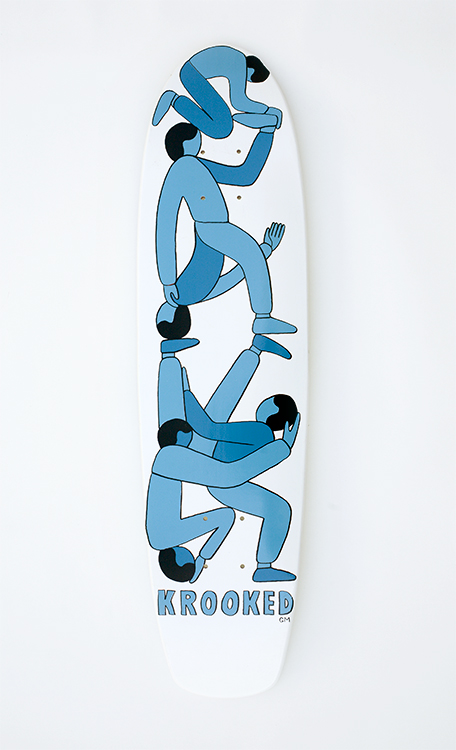 What was your relationship with art as a child and teenager?
From my earliest memories my favorite way to play was to draw. I would lay on the floor with a pencil and a piece of bond paper and tell myself stories with pictures. 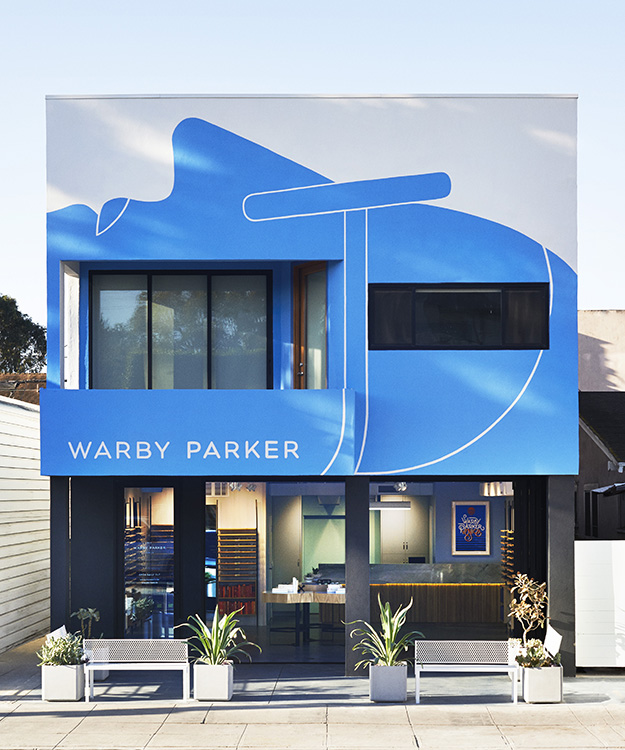 You are frequently working on illustrations for specific objects, like the BIGFOOT TABLE, do you develop a relationship with those objects and how do you approach a project like that?
Yes. The physicality of what I make is very important to me. Most people view what I do as .jpegs on their computer or phones, but when I am making something I am making it for the experience of being in the room with it.

“I AM ASKING YOU TO LOOK AT A SERIES OF IMAGES AND DO WHAT A CHILD DOES.”

The table looks normal from the top, but underneath there are drawings laser cut into it. So I am imagining kids bored at a long dinner party, and they discover the artwork, and getting their parents attention they pull them down to see it. Uncomfortable the adults will have to lie on their backs to see the drawings, and you have to spin to see them as they are placed at different angles – so now this is an experience and I am asking you to look at these drawings as a child; I am asking you to look at a series of images and do what a child does – make sense out of them by having them tell a story. 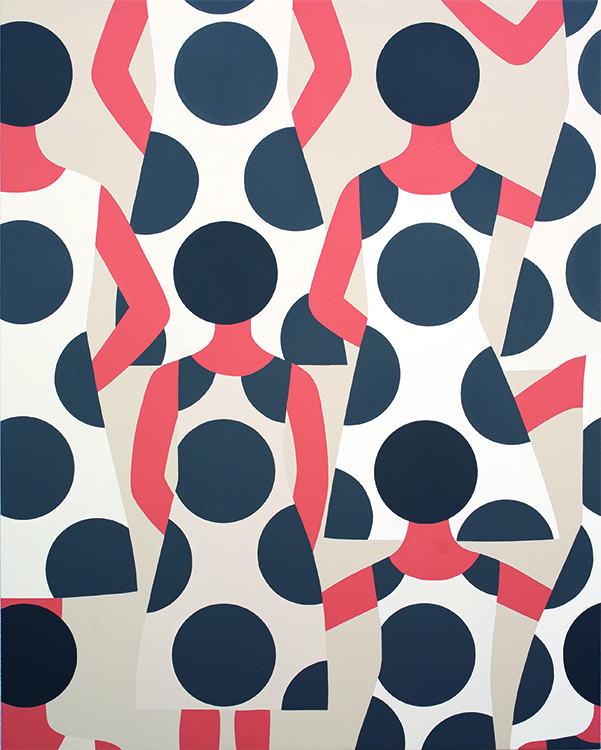 How did early skate culture influence you?
Skateboarding filled a gap in my life that I can’t imagine what I would have filled it with if skating did not exist. Skateboarding taught me to try things over and over until something was perfected, it also taught me to fake it; I learned to visualize. With skateboarding, I was fed the best that popular culture had to offer, at the time, and even now. Skateboarding is the best at what it does. So I was lucky to be influenced at a young age by some of the best people in culture. What would skateboarding be without CR Stecyck, Jim Phillips, Neil Blender, Spike, Andy Jenkins, O, MOFO, Pushead, Thomas Campbell, Alva, Natas? …It would be like a lot of other sports. Wakeboarding, or golf maybe. 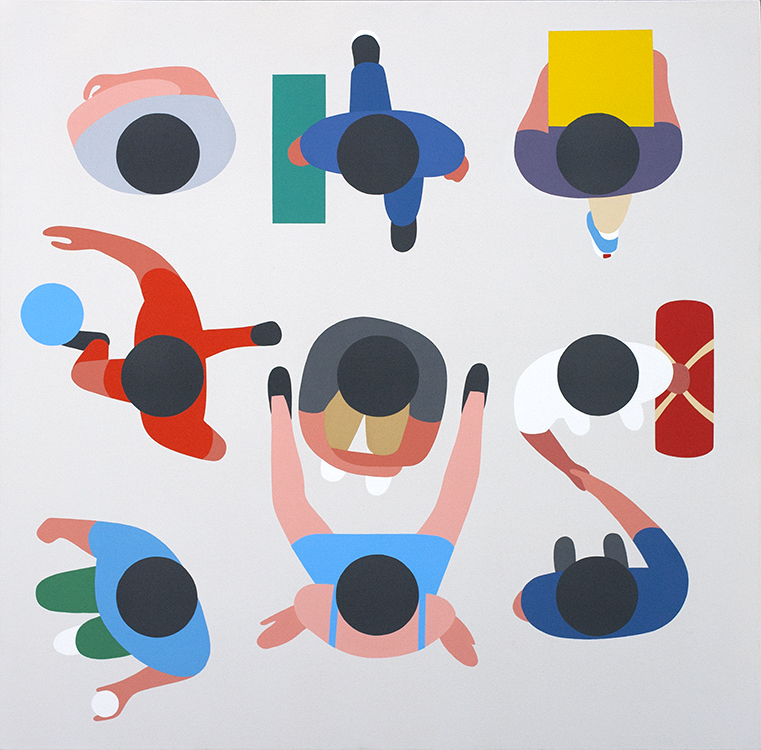 You did a solo show this year at V1 Gallery in Copenhagen, can you tell us a little bit about the series of works you exhibited?
The show at V1 was called “Meditallucination.” I exhibited new paintings and drawings.

I have always been interested in creating work that lies between image and language. Imagery that your mind “reads” as language rather than seeing them as spacial, or physical things. I want to induce a misfiring of your mind to create a connection, a resonance. I want them to feel something, not happy, or sad, but to feel like the letter T.

I used to hallucinate as a child. I actually once had a hallucination where I thought I was the letter T. So really I am trying to recreated that sensation for others.

Doctors have mapped out the human brain by placing electrical charges through the visual cortex. By doing so, we now have a map of the human brain. We now know that each section of the brain is wired for different functions such as reading of patterns, aligning objects, seeing colors etc. Hallucinating is a bit like placing an electrical charge to a specific part of your brain, activating something that is normally only an aspect of brain function, but bringing it to the forefront.

“I USED TO HALLUCINATE AS A CHILD. I ACTUALLY ONCE HAD A HALLUCINATION WHERE I THOUGHT I WAS THE LETTER T.”

Geoff’s painting inside the Berrics skatepark.

So I am trying to create imagery that triggers reactions we are hardwired for. I am attempting to use images to create small electrical shocks in your brain. To find images that feel like they were already in your head before I made them.

So the image is made up of shapes, and people becoming or interacting with shapes. Some of the shapes look like objects. The canvases use color and surface and form to play with the visual literacy of the viewer.

The other aspect of the show was a wall of drawings. Each image begins as a drawing. Much more time is spent on the drawing of the image than painting it. The work to refine the image is done through doing many repetitive works on paper. Sometimes the drawing is then scanned and colored on the computer to test colors, or traced to refine the shapes. The images are then transferred to canvas and painted. At each of these steps things change and evolve as the work goes through many different scales and physical states. The paintings are super clean and refined, as if made by a machine. The drawings are much more honest, they reveal something that the canvases obscure. 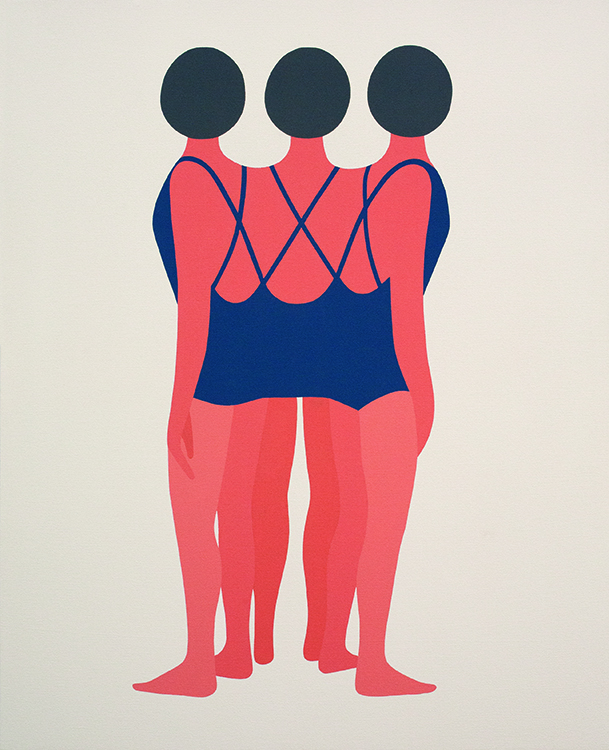 What was the last piece of music you listened to? When and where was that?
I am at home. It is raining outside (very rare for Los Angeles) and I am listening to Jazz piano: Paul Bley.