Interview with Bay Area's GATS aka Graffiti Against the System

A handful of years ago, before moving to the Bay, I started seeing these masked figures popping up more and more on the this new app at the time called Instagram. Later, after taking trips to Detroit and New York, I got to see these masks in person – in abandoned factories, rooftops, written in white-out tags and on stickers. I realized sometime after that it was GATS aka Graffiti Against The System. With a name like that, I paid attention. It’s hard for anyone not to. While most graffiti is about the self, GATS puts an image of universal humanity out. There’s so much thought and idea behind the work, it changes and evolves. It’s not just a ubiquitous tag.

In “Drifting Forest”, GATS’ newest show at Hashimoto Contemporary, we are re-connected with nature through work painted on reclaimed driftwood and discarded objects.  The objects that serve as a foundation for the work are then revived with new life. By affordably placing these once lifeless floating debris into the homes of people far and wide, GATS is connecting all of these people with nature. There is a harmony and connection made here. In this illuminating interview below, GATS speaks on how he believes no one is truly self-taught, how to address the issue of Bay Area rent increases as a creative community, and some of the most sound advice we’ve heard in a while for emerging artists. 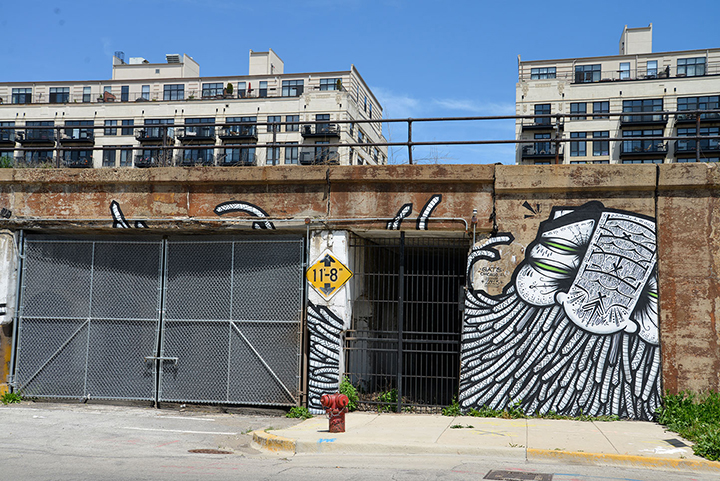 Brock Brake: Were there any other monikers or name changes you wrote before GATS?
GATS:  I started writing around 1997 and didn’t start writing GATS until around 2005.  I went through a lot of names and monikers before settling into this one.  There was a time period when I wrote a different name every night I went out and then there was a time period where I only wrote slogans.

Are there any memories you can share from some of your first graffiti missions?
My early missions were full of rough learning experiences. It was also ridiculously fun though because I was learning exactly how reckless I could be before learning that I wasn’t invincible. We were always way too deep. We would be painting twelve deep, a security guard would casually walk around the corner, gasp, “Oh shit!” and run away.  On the flip side, it resulted in a lot of long nights hiding from police, getting separated in strange towns, and almost freezing. 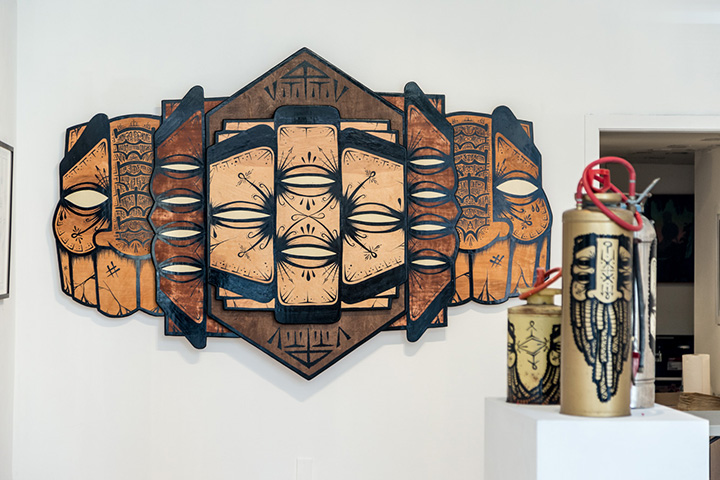 Can you remember some of your first experiences of art deeply influencing you, and perhaps how it helped form the artist you’ve become?
I have a few really creative members of my family that influenced me from a young age. It was punk and skateboarding in my early teens that brought me into graffiti.

Are you a self-taught painter through your years painting walls or did you have some training from a university or mentor?
I didn’t go to art school and I didn’t have any one primary mentor.  However, I don’t believe that anyone is self-taught. We are products of our communities. I have learned many things from many people. Every person I paint with teaches me something new. The best thing you can do is build a personal network of experienced people to which you feel comfortable asking questions. Not just artists, but carpenters, engineers, climbers, and any other random skill that will contribute to the innovation of your craft.

“I DON’T BELIEVE THAT ANYONE IS SELF-TAUGHT. WE ARE PRODUCTS OF OUR COMMUNITIES.”

You landed on the idea of creating your iconic mask while you were in the Middle East.  Was there some kind of ‘eureka’ moment?
There wasn’t really a eureka moment because it was significantly different every time I painted it. It was more fluid changing with every spot. It takes some time to perfect proportions when painting top to bottom walls.  One of those first masks in Jerusalem even had wings. Next to it read, “Do birds laugh at our walls?”  It’s across from the central bus station if someone can get a flick for me [laughs]. 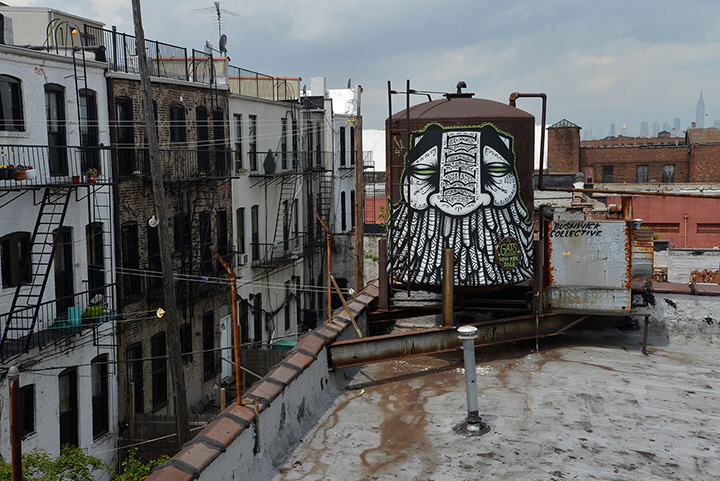 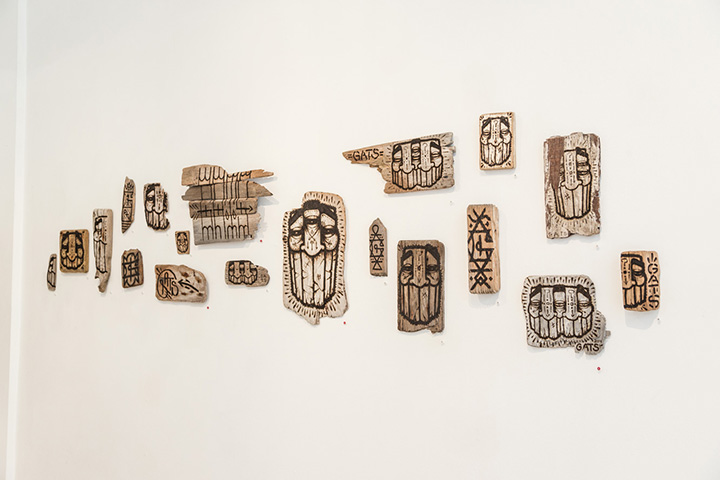 What are some of your opinions about communities in the Bay Area that don’t have a voice and are being evicted from their homes or driven out because of over-development and rent increases?
It’s happening on a much larger scale than just the Bay Area. All of the coastal cities and many of the major cities across the country are experiencing the same thing.  There is a cultural shift where rich people want to take the cities back.  This has already happened in a lot of Europe. If you go to Paris, it’s all wealthy people downtown and the working class has been pushed into the suburbs.

Oakland is an incredibly depressing and ironic place because the very people who made it an interesting place to live are the first ones to get pushed out. For example, Rock Paper Scissors, a non-profit collective that offers classes to the community and at-risk youth just lost their building. They started the art walk that Oakland is now famous for. Their rent increased from $1,400.00 to $9,000.00 this year.  It’s difficult to say what is going to happen, but hopefully the bubble pops just as it did during the dot com era.

If we were all forced out of the Bay, where else could you see yourself living and working?
If you find somewhere you love, don’t tell anyone about it.

I’m more flexible than most people. I’m transient by nature. I start to freak out if I’ve been in one place for over a month. What terrifies me is not having these communities to visit. Once the radical and artist infrastructures disappear, less young people get involved and movements start to fade out. We need to regroup and figure this out, but it’s a question we have to address together. 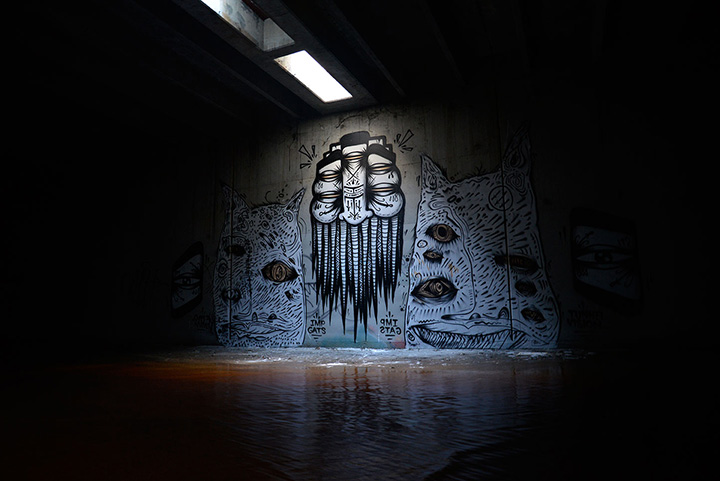 A GATS installation in Oakland.

What would you say to aspiring and emerging artists and writers out there? Any advice?

If you want support, you have to be about something. Respect what’s going on locally and do something to give back. Otherwise you’re irrelevant and won’t last.
What are your big plans for the rest of 2015?
I don’t want to loose the element of surprise but I try to push into new cities and countries every year. This year I’m looking South.

Any last words for everyone out there?
Consider eating more vegetables. Make a habit of reading history. Speak up when your peers are being idiots. Plot your escape.

The Story Behind Graffiti's Favorite Paint :: An Interview with Montana Colors