Spencer Fujimoto is a former pro skater turned jewelry maker. We profiled him and his brand El Señor New York on The Hundreds in 2015. In January, Spencer turned 40—which is a milestone in everyone’s life that says you are officially middle-aged. It’s a time of reflection. When you embrace some things from your youth that you will hold onto forever while letting go of other things that are no longer relevant to your new phase in life. In honor of the occasion, Spencer worked on a project that metaphorically captures the feel of moving into the fourth decade of life perfectly. He filmed a new skate part—a 30-minute short film titled The Search that’s an ode the classic Powell-Peralta The Search For Animal Chin (1987) video. He also went into his storage and broke out a collection of Air Jordans that he had been sitting on for roughly 10 years and thoroughly destroyed them during the filming process. Any sneakerhead will tell you that skating in these shoes is the equivalent of lighting dollar bills on fire. I sat down with Fuj to get the full story on his new part, destroying the collection, turning 40, and what it all means to him. 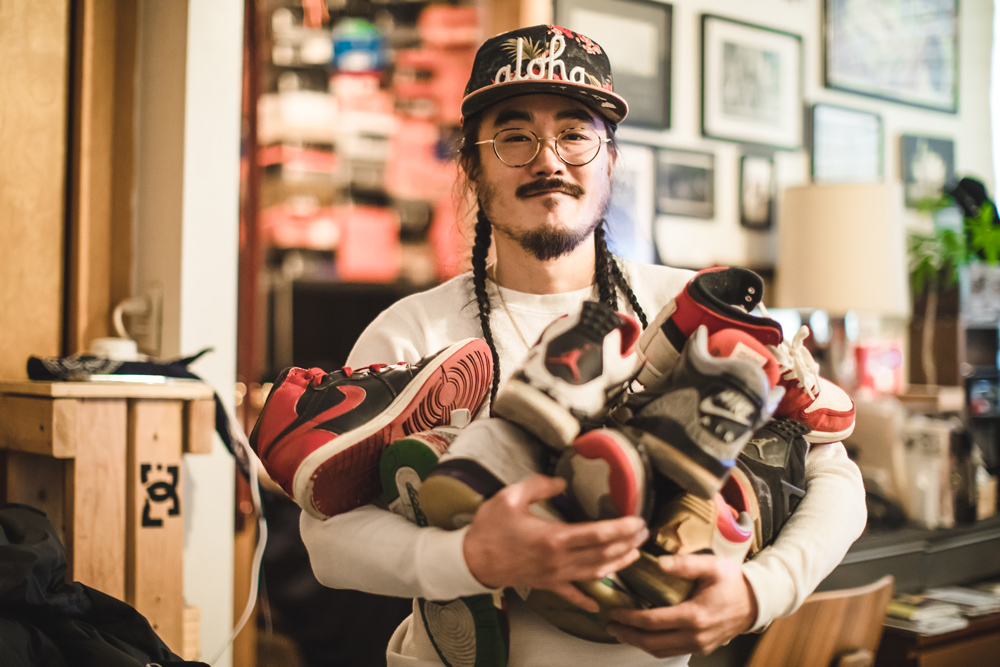 LELAND WARE: What made you decide to come out of relative retirement and film a video part for your 40th birthday?

SPENCER FUJIMOTO: It started getting nice out. It was March or something like that. I posted something about being 39. And Vern Laird from Bones Bearings hit me up like, “Dude, you gotta do it!” And I was like, “Dude, what are you talking about? I’m not doing anything! I’m an old man.” He was like, “Come on, this is it. You gotta do it! You’ve got one year.” He kind of pumped me up. I went out skating a few times. And I decided to do it. I called up the filmer. And I started doing something. I had my tickets booked to Hawaii already for like two months later. That’s when the idea of making it a little bit more came about.

Yeah, you paid homage to the Powell-Peralta classic The Search For Animal Chin (1987). For our readers that aren’t familiar, Animal Chin is this mythical character that is a metaphor for fun. And the Bones Brigade go all over looking for Chin and find this crazy ramp that’s the best ever. And they have a ton of fun along the way and come to a realization that they found what they were looking for. How did you utilize this theme in The Search?

I used it as inspiration for what I was doing and what that movie represented to me. They go to Wallows in Hawaii. I had been to Hawaii four times and every time I begged people to take me to Wallows. But I had never been. So this time I knew I had to go there. And I was going to get them to take me there because I was going to tell everyone that I’m filming something. It was the final days after almost two weeks, and I told everyone that I was taking a cab there. My man Ryan from In4mation ends up taking me. So that’s how the Hawaii thing happened.

Before I went to Hawiaii, I was going through my sneaker collection. Why would I call someone up for skate shoes when I still have a bunch of sneakers from the heyday. I sold a bunch. I used a bunch. I gave some away. But I still had like 50 pairs. And about half of them are Jordans. So I decided that I was going to skate in all of my Jordans first and film it. And and pay full homage to Animal Chin.

Right, because for the people that haven’t seen it, the Bones Brigade skated in Jordan 1s in Chin. And there’s an iconic photo shot by Grant Brittain of all of them doing an invert on the spine at the same time and you can see all of the different colors of Jordan 1s.

Basically the whole movie it’s them only skating Jordan 1s.

What’s your background with sneakers?

After I retired from skating, I worked at Nort then Recon—Stash and Futura’s store. I managed that place for two or three years.

Would you consider yourself to be a sneaker collector at that time?

Not at that time, I was more of a sneakerhead. I was already a sneakerhead from being a kid. But the collection was pretty light. It was probably like 25 pairs. I used most of them. 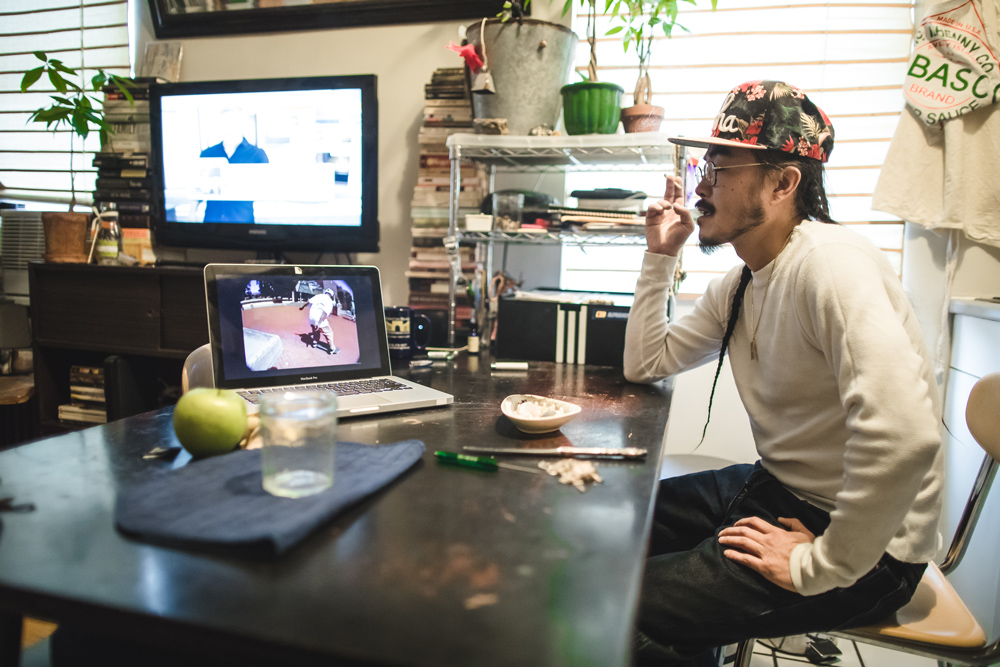 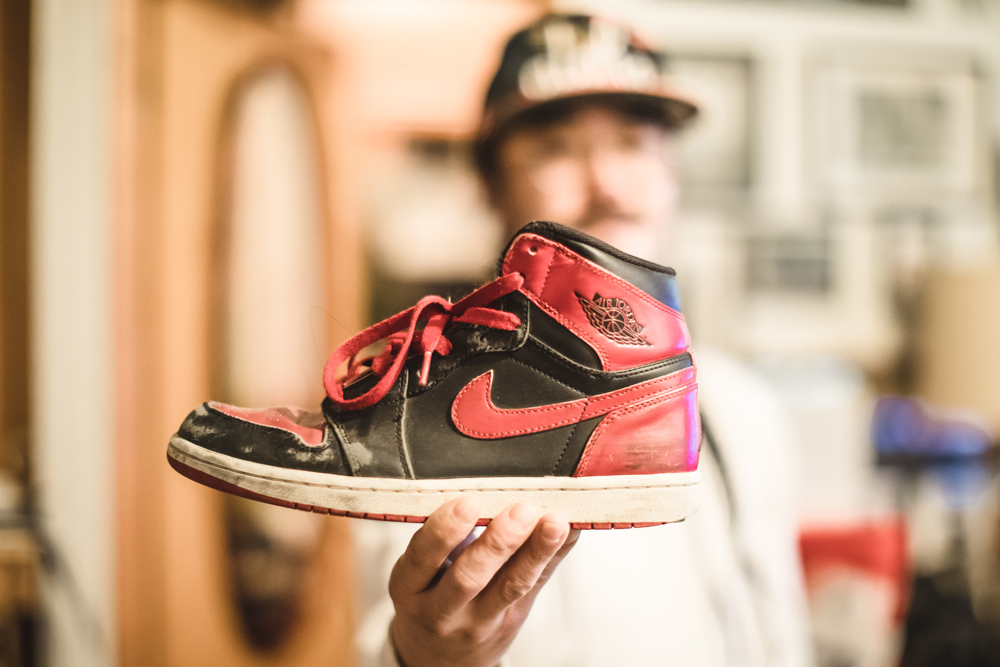 Where did you house all of the shoes?

So you when you turned 39, did you just think, “What am I gonna do with all of these sneakers?”

Well it got chopped down to probably like a third of what I had. But I was thinking, “I’m gonna be 40 years old. What the fuck am I gonna do with all of these sneakers. I’ve got a lifetime of sneakers.” I needed the space. I’m trying to minimize. I’m getting old.

Some of these sneakers are worth quite a bit. I’m no collector, but I have friends and affiliates that are. And I know people that make tons of money from reselling sneakers. But you decided to use them—which is a really interesting component to this whole story.

I could have sold them. But to me it meant more to use them. The collection doesn’t define me. No one sees it. You can only wear one pair at a time. Having that lifetime supply and never wearing them because I wear the same two pairs of shoes for a year didn’t mean much. I wanted to get my money’s worth. Most Jordans are really good to skate in. 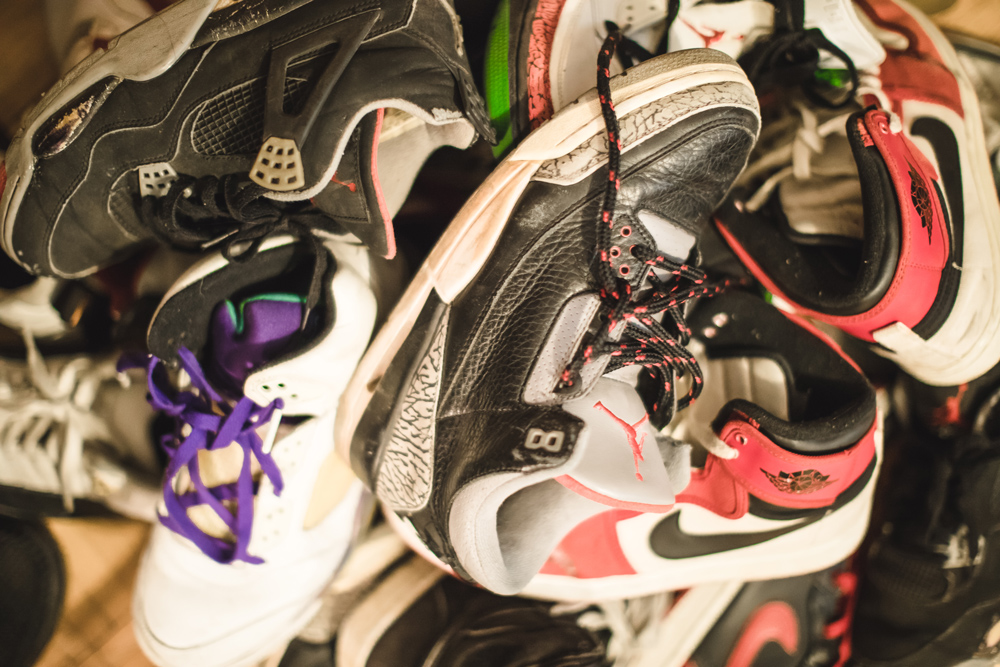 How did it feel to take them out of the box and put them to use after having them for so long?

Trust me, some of them were so crispy that I had second thoughts. I put the Super Glue on the threads to make them last a little bit longer. Now I just kind of want them out of here. I threw away a lot of the boxes. So now they are just piled up in my living room in bins. It did hurt my feelings on a bunch of them. I look at some of them and I remember putting the first scuff on them while I was skating and was like, “Aw!” But then I thought, “It’s just time to use them up. They’re just sneakers.”

You live in the Lower East Side and skate around Downtown mostly. Did you ever encounter anyone on the street that couldn’t believe that you were skating in those kicks?

Yeah, that happened at just about every session. The funniest thing that someone said was these three kids. They were bugging out and couldn’t figure out what was gong on. And then one of them was like, “Nah, that’s what the stars be skating in.” I just turned away and laughed. That was funny. They thought I was like Bieber or Wayne or something skating around in $400 sneakers. But you know, never pay retail—that’s my shit. 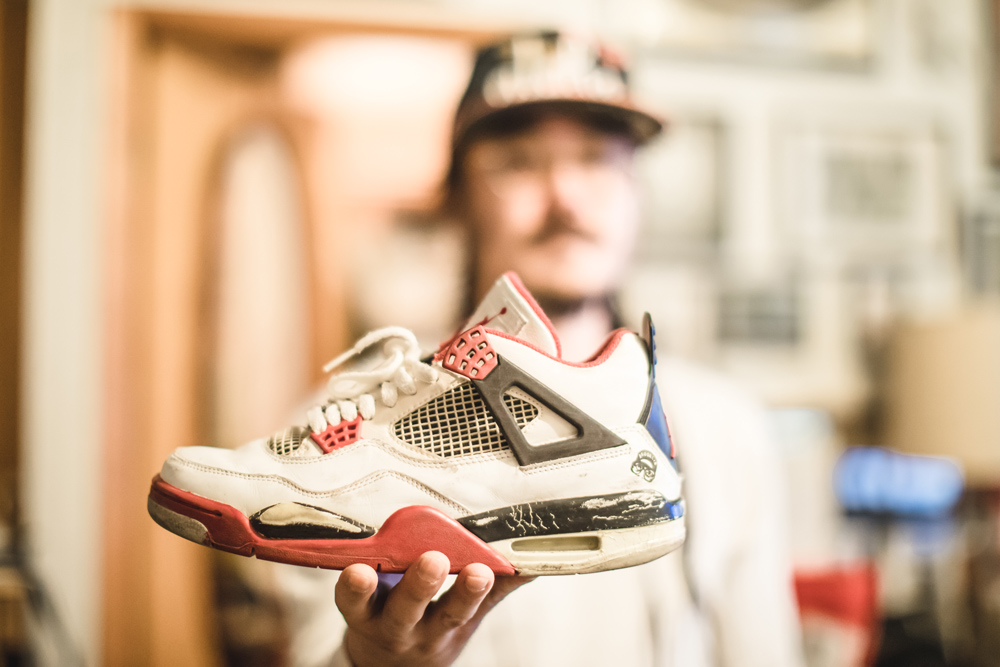 Metaphorically, this whole thing kind of feels like a passing of youth. Putting out a video part at 40 that nods to a video from we were kids. Using the sneaker collection that was amassed when you were a relatively young adult. Talk about the significance of all of that.

It is a transition, and that’s kind of what it was all about. The skating was also about the transition. It was the last year of my 30s. I’m not going to be better at 45. I was tapering off at 25, loosing a lot of stuff. It goes away. That’s what happens to athletes when you get old. But the tricks that I did, I wasn’t breaking myself to get them. The first thing that I did, I just kind of told the camera man to keep up with me. Most of those tricks that I do, the lines are all freestyle.

And for the sneakers, what are your thoughts on collecting and consumerism in general?

Do what you like. If it makes you happy, that’s all good. It’s just that I had a realization. I don’t know if it was making me happy. It’s cool, I have the shit that I want. When I worked at the store, I was just getting all the OG shit. It was the shit that I couldn’t get or didn’t want when it was released. When Jordan’s were really hot, it just got crazy. That was when people were getting shot and robbed. That was even before people were trying to buy them right off your feet. So I was kind of over it. I was an Air Max dude. When the 95s came out, I was all about Air Max 95s. So I missed a whole bunch of the Js. I didn’t get them. I didn’t look at them. But then I got to get all of the shit that I wanted.

I know these are from different years. But how long would you roughly say that you were sitting on this collection before filming this part?

Before they saw the light of day again? Let’s see, maybe almost 10 years.

I was 14. The process of actually filming the stuff is exactly the same. You kind of start out just fucking around. Then you get some stuff and you get psyched. So either it’s just divvied out and you have a small little part. Or you get psyched and you have a big part. And towards the end of it, you start feeling this pressure. It’s like, “This is it. I need to get x, y, and z to make the part right. This is what I’ve been wanting to get on some skate shit.” I’ve never actually produced a film—even like a skate video. This is the first time. So going between me and the director, Paul Roura, I had the mentality that it was done. But we needed more stuff—b-roll and filler. As a skater, I barely got to pick my song. Sometimes you don’t get to pick the song that’s played during your part. Sometimes you get to pick it. Sometimes you get to choose which way you want the tricks to lay and sometimes you don’t. 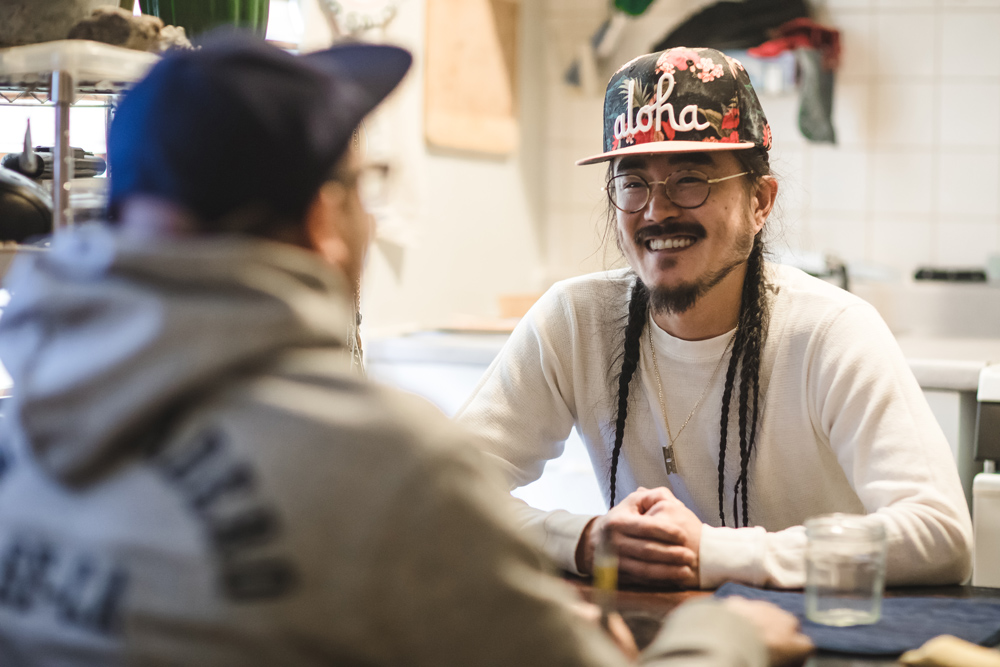 There’s something in the title credits and the YouTube account called The Good Homies. What is that?

Ah, The Good Homies, we launched a new production company—event, media, PR, and marketing. It’s called The Good Homies. We got a nice little team. You can check it out on the Instagram @thegoodhomiesnyc.

Sneakers are sneakers, use them up. Fuck it, play ball in them. That’s what they’re meant for. If not, then skate in them.

GOOD AS GOLD :: From Skateboarding to Jewelry Making—Spencer Fujimoto

20 Years after His Role in 'Kids,' Hamilton Harris Is Making a Documentary on It