It’s a cool thing when people you’ve known for a while turn out to have an amazing talent you were unaware of. Floor van het Nederend is a perfect example. I knew him through working at online store FreshCotton, shot the shit with him a few times over beers and I knew he DJ’d in a crew called Floor, Dirk en Ik. But seemingly out of nowhere, the 28 year old painter emerged from someone who illustrates as a hobby to one of Amsterdam’s most up and coming artists, who’s worked with brands like Patta & Converse, FreshCotton and OBEY and illustrated a variety of record covers, as well as flyers the infamous Bar Ludwig. I sat down with him right before the opening of his second show, DOG DAYS, to talk about his growth as an artist in the last few years. 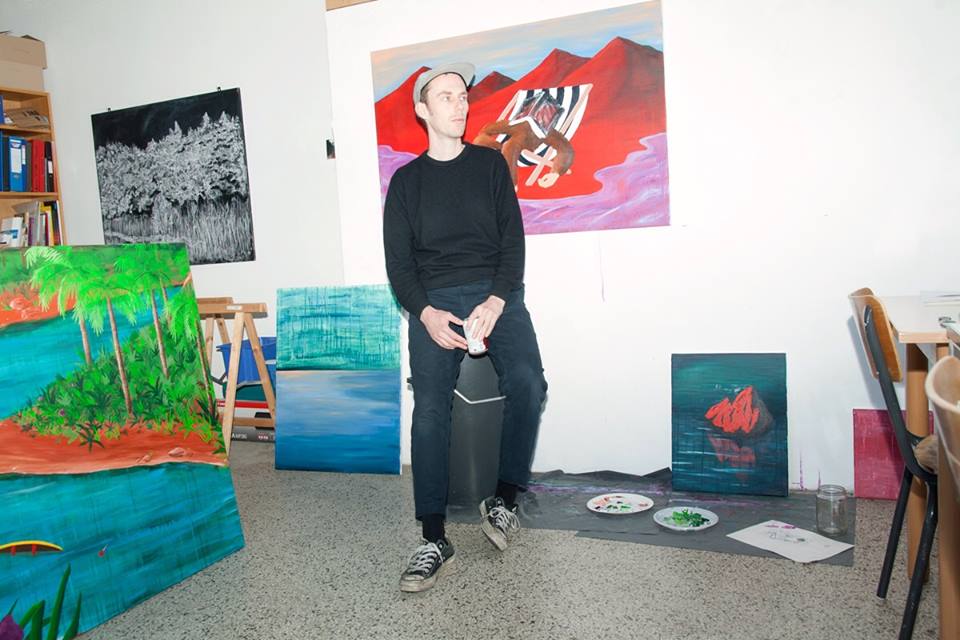 MAARTEN WARNING: We’re you heavy into drawing as a kid?
FLOOR VAN HET NEDEREND: Yeah, a lot. It’s kinda funny, back when I was in elementary school I drew a lot, and I had a dream to become a comic artist. But for some reason a lot of kids in my class were really good at drawing, way better than me. When I was about to enter high school, my headmaster advised me to drop the drawing, saying I’d never be able to make a real career out of it. He told me to go finish school, go to college and get a job. So during my high school years I barely drew. I went to college, studied communication science and graduated after way too long. But after a long time I slowly picked up drawing again and got back into it.

When did you realise you had a real talent for it?
A few years ago I was in a band, Bat Country. I drew a graphic for a band T-shirt, and people were really feeling that one. The T-shirts got bigger than the band itself. All of the sudden I saw people on the street, walking around in a T-shirt I made. Bonne Reijn (a well know stylist), was a big fan of the shirt. He and DJ Malvin Wix were involved in a bar called Ludwig, and they asked me to make some flyers for events. It wasn’t something I jumped at. I saw drawing as a fun thing to do for myself, nothing more. But I gave in, did a few flyers, and loved it. Around that time, my girlfriend had gifted me a dip pen. I started drawing with ink and discovered a whole new side to drawing, which I loved instantly. That really kicked things off and I started to draw every day.

I know comics have influenced you a lot. What comics did you read as a kid and which are you still reading today?
When I was young I pretty much read every comic out there. My favorites were Tintin, Lucky Luke, Spirou et Fantasio, and Gaston Lagaffe. Classic Belgian comics. Nowadays I’m more into more adult stuff, underground comics by guys like Charles Burns and Daniel Clowes. Style-wise they’re not that different from Tintin, just a bit more darker and grittier.

Last year you did a one-off comic with Patta and Converse. Do you have any dreams of one day putting out your own series?
I’d love to do it. Problem is that writing the actual story is not something that comes easy to me. After I did that comic I started working on my new show, and I was completely focused on telling stories through drawings and paintings, and not words. I discovered painting, and really like it, and I’ve even made a few sculptures. So those are things I’m more into right now, but I definitely hope to do a real comic some day. Hopefully I can team up with someone who provides the story, maybe a guy like [Dutch rapper] Faberyayo, and I just do the artwork. 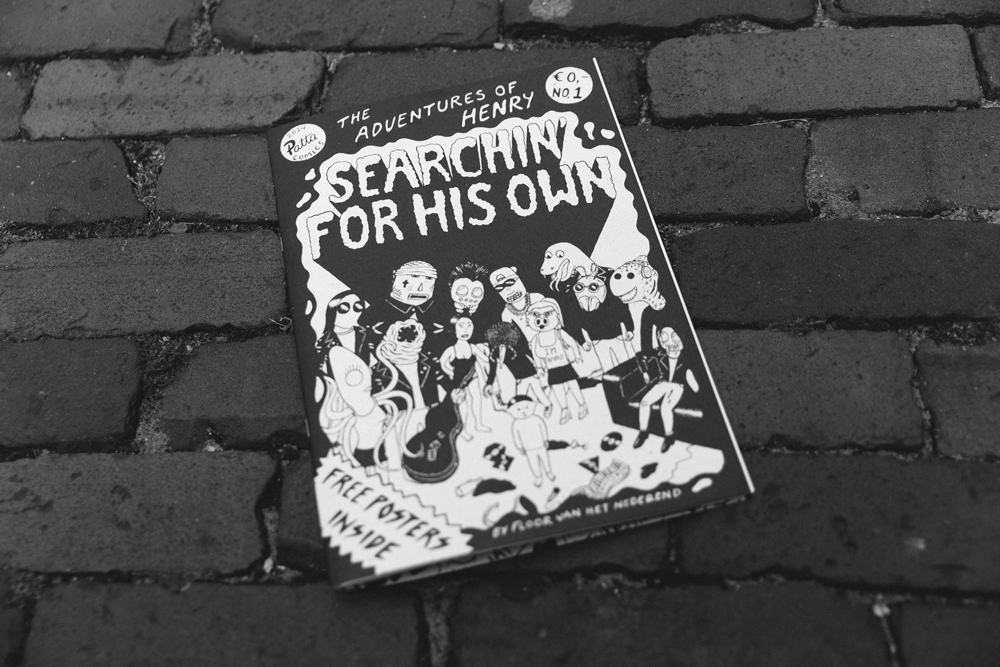 You just touched on your new show, DOG DAYS. Can you tell us a bit more about it?
The work I made for my last expo was all pretty gritty and cynical. So this time I wanted to use more color in my work and focus on things like the sun, and positivity. I saw a movie called Hundestage (Dog Days), and it’s about a heat wave in some boring ass suburban village. It’s way too hot, there’s nothing going on and people just chill in their back yard all day long. I really dug that vibe and decided to use it as inspiration for my show.

Your previous show only featured drawings, now you’ve expanded into paintings and sculptures. How did that transition come about?
I like to experiment with things, just for the fun of it. My girlfriend studies art history and we visit a lot of museums together. The paintings I saw during those trips really inspired me. And the funny thing was that a lot of the stuff that I’ve done in the past may seem like it has nothing in comparison to the art you see in museums, but I found out that they’re actually quite connected. And that inspired me to start painting. I’ve never really done it before, and it’s still in its infancy stage right now. 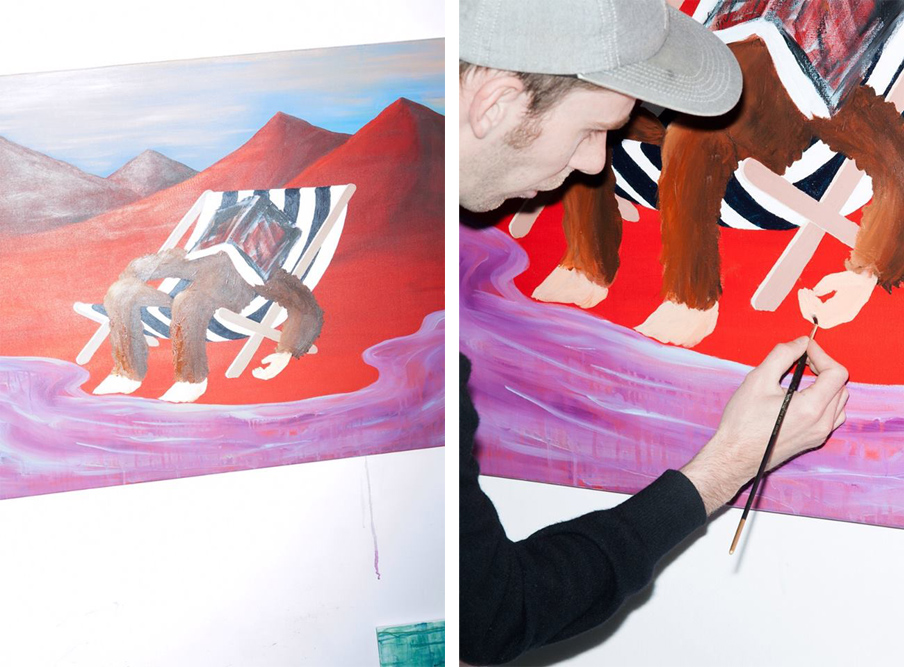 Do you like it?
I love it. I have experimented with both oil paint and acrylic paint at first, and while many believe that oil paint is the paint that fits the art form the best, I’ve developed a preference for acrylic paint. I don’t have an art education, never learned how to paint, I just try stuff and see what works best for me. Also, a lot of paintings I liked were made with acrylic. So I’ve definitely discovered painting, and love it, but it’s also a bit weird for me. I don’t really know where I stand in the grand scheme of things. There are so many people who’ve been painting for so long, or received an art education… I compare it to playing an instrument. I’m not as skilled as others, but I find different ways to compensate for that. Just because you’re the world’s most gifted guitar player doesn’t mean you make the greatest songs, you know?

It’s not always just about technique, it’s about the emotions you trigger, or the story you’re telling.
Exactly. But that’s something that has been on my mind a lot since I started painting.

You’ve done some commercial projects as well, how do you approach those compared to working on art for yourself or a personal show?
The biggest difference between the two is the time I spend working on them. I’m a lot more critical about my personal work. There’s less pressure. If I make a small mistake on a private piece, like a smudge or something, I usually start all over. If I’m working on a flyer, I just correct it in Photoshop. I have the luxury of taking more time for my own works, so I approach them differently, more careful.

How do you balance private and commercial work?
It’s all based on how I’m feeling. Last year I did a bunch of commercial stuff, which was fun, but at one point I wanted to try out new things and focus on myself for a bit. If someone hires you for a job they won’t ask you to do something you’re not known for. No one will out of the blue ask me to paint something, because they don’t know if I even like to paint. But ideas like that start to develop in my head and there comes a time where they need to come out. That’s when I take more time to work on my own stuff. 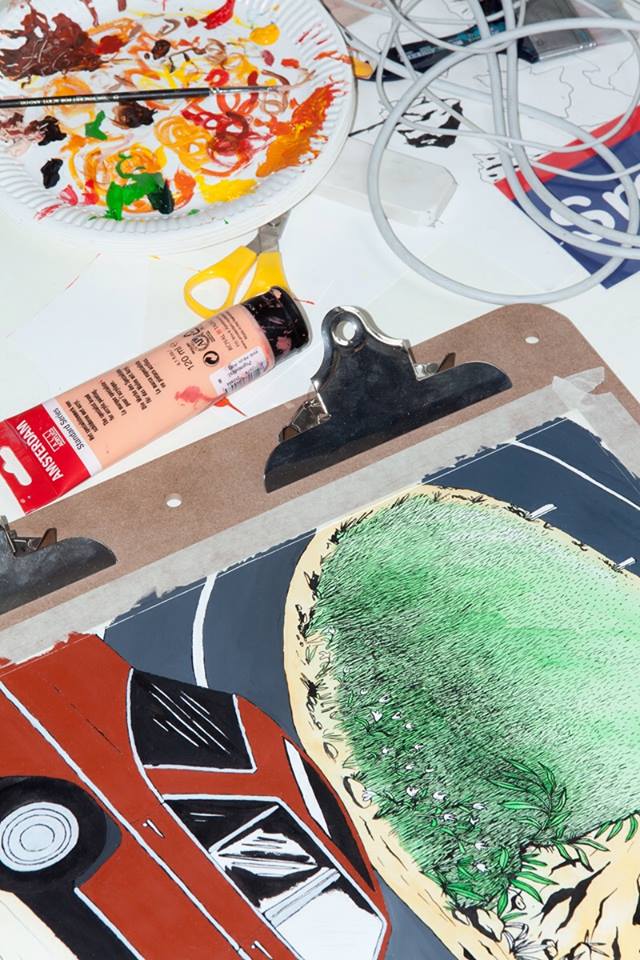 Bat Country has called it quits a few years ago. Are you currently in a band or doing anything music-related at all?
Not really. I never was that ambitious about music. I like to hang out, drink beer and play music with friends. Playing gigs and all that, I hated it. I was always incredibly nervous before I went on stage.

What do you find in music that you can’t find in your other art?
I like that in music I’m working with friends. Us making something together. Drawing is more of a lonesome activity, although my girlfriend is pretty involved with that. I always bounce ideas off her and she gives great feedback. When I play music there’s no pressure, I’m just fucking around, while in my art I always want to push myself.

You’ve designed a bunch of record covers. Is there an ultimate dream cover you’d like to design? A certain band or artist you’d drop everything for to do their artwork?
That’s a tough question. A lot of the bands I like are pretty old now, and if they make new music it’s usually not as great as their old stuff. As far as current artists… I don’t really know. I did a cover for Faberyayo, that was pretty cool. I’d like to work with more Dutch artists. I also do posters for Paradiso (a legendary Amsterdam music venue) when they have certain gigs. I did one for Kurt Vile recently, that was a really cool thing to work on. It’s nice to do those kind of things for ‘newer’ bands  who’s music I like, but they’re not my ultimate dream bands to work for. 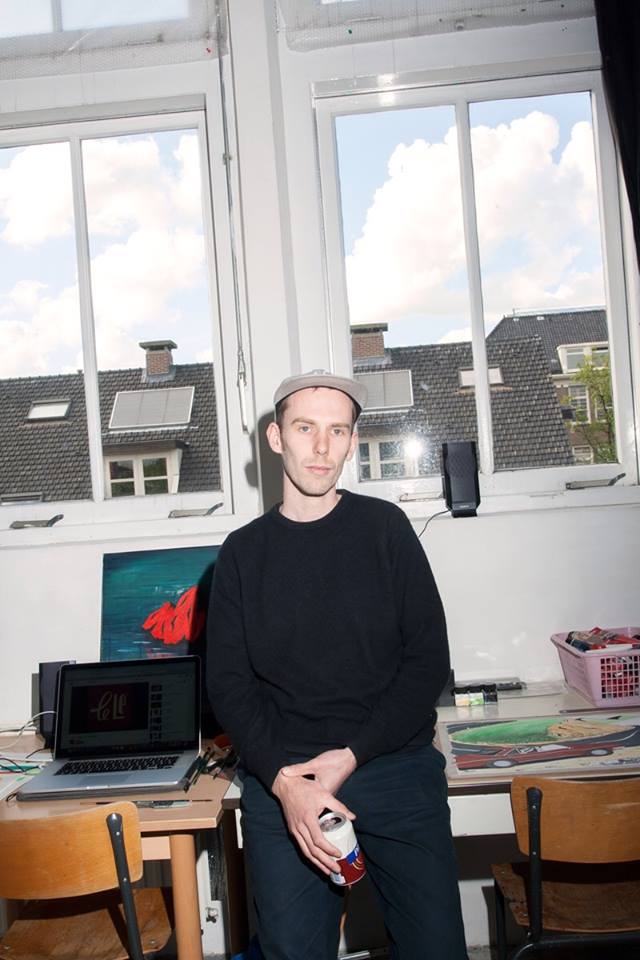 Have you considered launching a clothing line to get your work more out there?
Meh, I don’t know. Maybe if people I know contact me to do T-shirts… I’d be up for that. But I find it hard to come up with cool things to put on a T-shirt. My fashion game is not exactly on lock. Sometimes I design something but then doubt strikes right away: Will people like this? Are they actually going to wear it? Maybe I just need to work with someone who has more of a fashion sense, FreshCotton for instance, who can tell me more about trends. I usually catch on to trends a bit late, I’m definitely not an innovator when it comes to that.

Your show kicks off this weekend, what’s on your schedule once it’s done?
First of all a well deserved vacation. After that… not really sure right now. I usually have a new project to look forward to but this show took so much time to prepare. At one point I was working from 9 am till midnight. But I’ve got a few things, smaller things. Posters for Paradiso, a t-shirt for the 20th anniversary of Revert skateshop along with Friso Blankenvoort en my design here Jjoost Swarte… And that’s about it for now.

You can see more of Floor’s work on his website.

His new show, DOG DAYS, is open for viewing between June 19th and June 21st in Amsterdam. Check the flyer for all the info. Photos by Rick Erfmann.

From MS Paint to Skateboard Graphics :: The Irreverent Drawings of Leon Karssen