Here’s my last story from that Germany trip 3 years ago. Our final night there, we went out with the King Stampede guys and our man Fats. After a round of clubs, we got in the first available cab and realized the driver was (1) some young blonde chick and (2) crying. Usually, cabbies are (1) old disturbed men and (2) smelly. She was screaming on the phone at her jerky boyfriend, apologized, then through tears, asked us where we wanted to go.

We asked her to take us to a late night grub spot, so she whipped us around to this local cafe. She was still irate, belligerent about her crumbling love life, so I invited her to come hang out with us for the rest of the night. At this point, I think saving her job was the last thing on her mind, so she was like “Sure, why not?” and we had a personal chauffeur after that. The sun was coming up at 4am even though it had just set a couple hours before. This girl was the worst cabdriver, bad conversationalist, and a horrific chainsmoker, but a good friend. 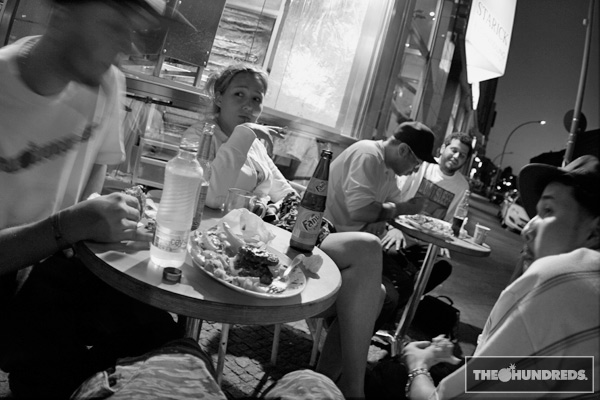 Before THLA was built, this space was our studio/office. And aside from Reserve and Supreme, Fairfax was all but a ghost town. So we’d spend Fridays kicking around that soccer ball on Rosewood, skating, tossing beers, and being idiots. Remember that Diamond collab we did for the 5TH? The Good Ol’ Days? This is what it was all about. That’s Gomez, Ben, Jon, and Scotty’s hair. I guess not much has changed. 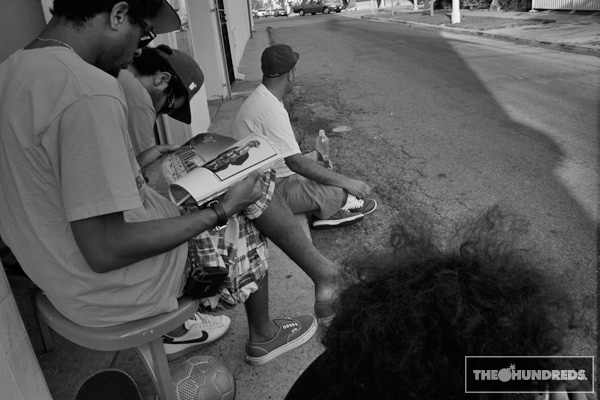 This room was so small that I could barely fit half of it into the frame.You’re looking at our very first headquarters near Culver City.Otherwise known as my old studio apartment.Ben and I would grind it out behind our makeshift desks, using the towel cabinets as our first t-shirt inventory racks, and stacking orders in the kitchen.Because I didn’t have an air conditioner, and because no one in their right minds was trying to visit us out in the middle of nowhere, Ben and I spent the entire sweltering summer running a 9-5 operation in our boxers.The only saving grace was the occasional breeze and the In-N-Out Burger on the corner that made the entire block smell like grilled onions.I have no idea what we were thinking at the time, we probably figured our lives sucked so much that there was nowhere to go but up from here.

See that skateboard on the ground? It’s Ã¢â‚¬Å“fossilizedÃ¢â‚¬ and cemented in our THLA storefront’s installation. 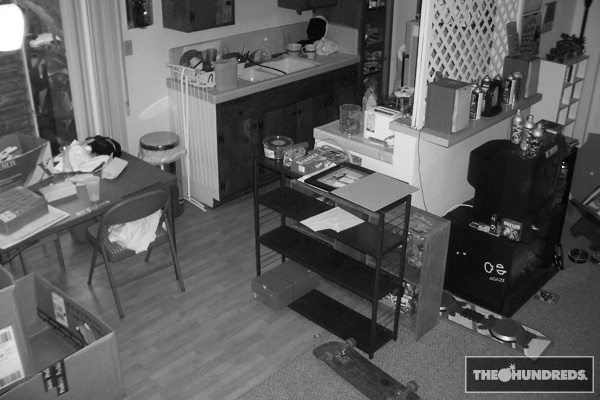 A couple years back when I was in Tokyo, I had dinner with Usugrow at this random coffeeshop in Roppongi. It was a bizarre experience, with the working-class diners and familiar American smells, but set against a foreign backdrop. Plus, in the middle of it all, Nobu talking to me about the darkness of Japanese otaku culture and how evil it was. This photo kinda sums up the feeling, kinda mundane but eerie. 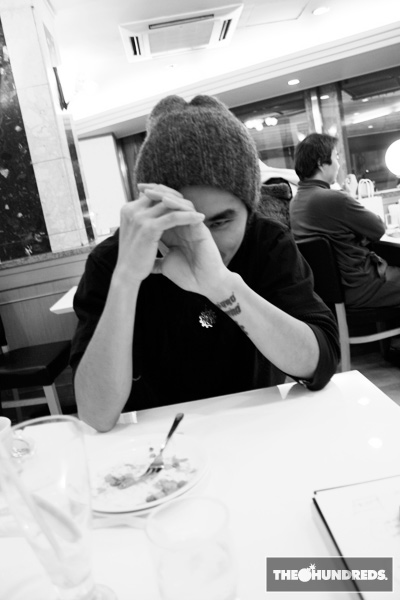 Ben’s gonna hate me for this. I kinda hate me for this also.In the fall of 2005, Ben and I spent a day in North County, San Diego, driving around to different locations for a Complex Magazine photo shoot.It was our first real editorial piece on the brand, so we were stoked, except Ben was bummed he had to wear a purple t-shirt.The photographer, who also happened to be one of my oldest friends, Zach Cordner, took us to this hole-in-the-wall burrito spot called Toe’s to get this shot.The food was amazing, but apparently the editors didn’t feel the same about the photograph, because it was never published.Maybe it was my hair. 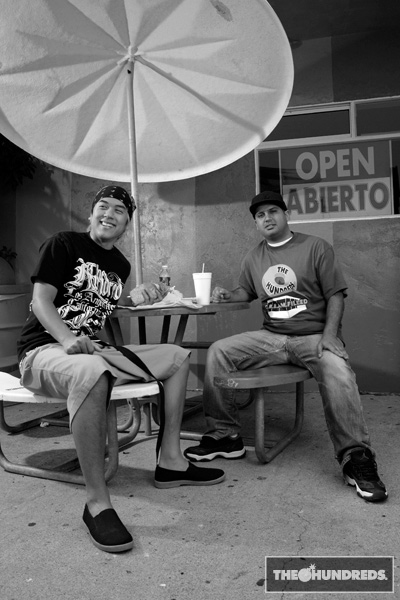 I think this was our first time at The Berrics. It wasn’t too long ago, maybe a year or so, you probably even remember this photo. That’s Mike Franklin aka Flowin’ Owen on the frontside lipslide. 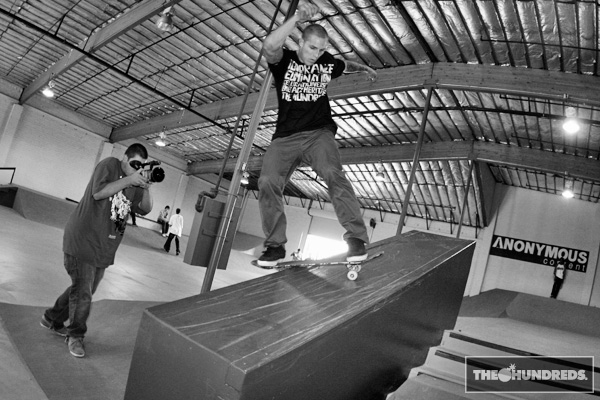 Ray posts these kinds of old crew shots on his blog all the time. I don’t know if he holds onto them for ransom or just to remind people how young they used to be. I think this was at one of Joseph’s Loose Tooth nights. From left to right, Jupiter (UNDFTD), Nick (Diamond), Arsen (Hall of Fame), Ray (Mighty Healthy), and Scotty Trillz (The Hundreds/Lord of the Rings). Victor’s somewhere in the background. 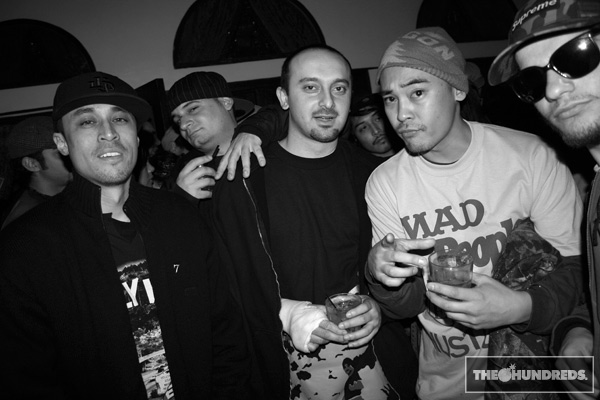 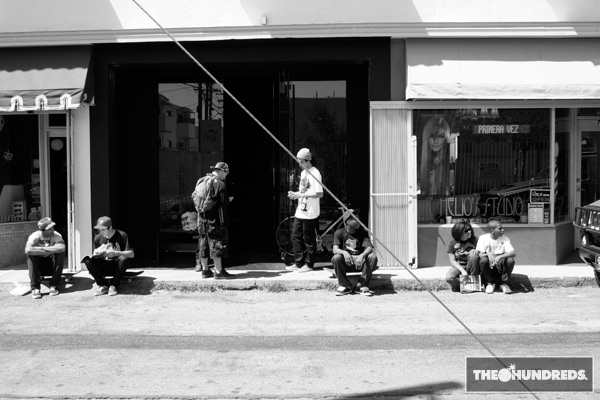 The first time Nas walked into THLA, Morgan was playing a pirated track off of the new Jay-Z record.

Turns out Nas was hearing Jay-Z’s out-of-retirement album, Ã¢â‚¬Å“Kingdom Come,Ã¢â‚¬ for the first time.He told Morgan to start it over and turn it up, then Nas stopped in the middle of the floor, dropped his bags, and listened to the first single in its entirety, while customers milled around him, gawking shamelessly at one of the greatest rappers of all time.Considering his and Jay-Z’s storied past, it was crazy to watch Nas zone out and bob his head to the track, he was completely oblivious to anyone else in the room, deconstructing and analyzing the words that were being spit from our speakers as if he was squaring up Hova right then and there.The song finished, the spell was broken, he looked up and gave a smug nod.

He cocked his head to the side and declared, Ã¢â‚¬Å“Not bad.Ã¢â‚¬ 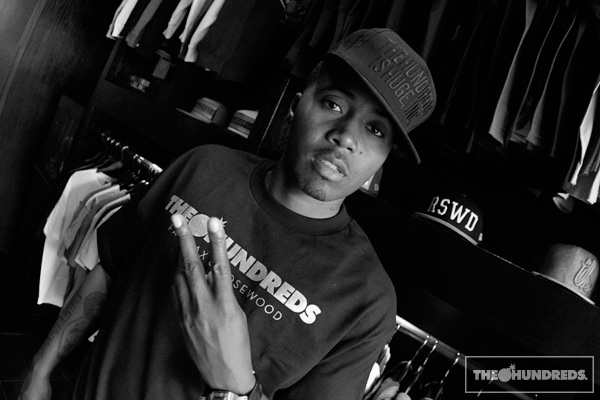 The Hundreds Los Angeles. On any given night. 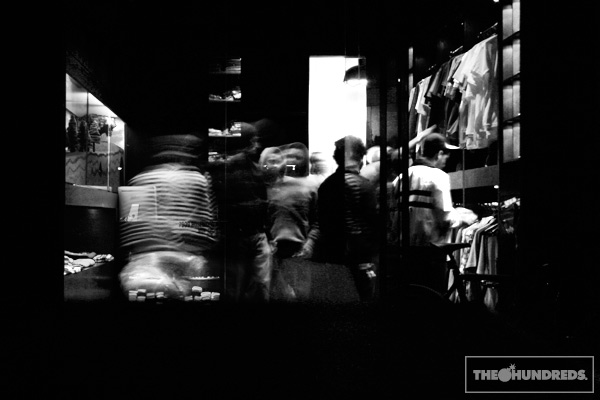