“I’m going to blame everything on the internet.”

Legendary artist and world-renowned toymaker Frank Kozik is not a fan of what streaming did to the music industry. 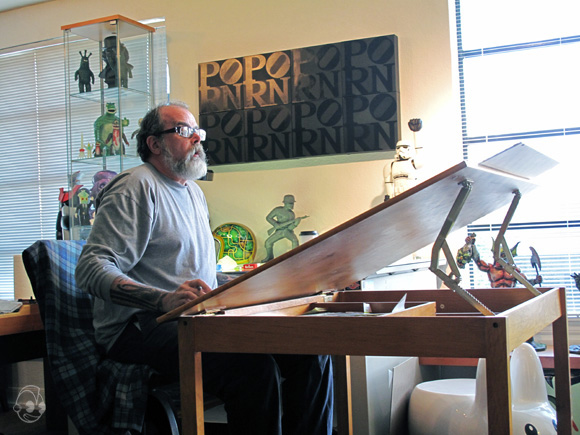 Frank Kozik is all about the experience. The actual thing. And he knows it’s pretty much gone, especially now that we can’t have any concerts for the foreseeable future. Things have gotten so bad, even Kozik himself has crossed over to the dark side of streaming, sometimes giving in to the effortless allure of an algorithm-curated playlist.

“I haven’t bought a record in years, I’m an asshole,” Kozik admits. “I just go to YouTube and click a playlist and listen to it all day. I’m part of the problem.”

The internet makes life easy, but it’s a give and take. Today’s generation gets served an album cover as a bullet point on a rollout strategy, posted once to Instagram, never to be appreciated again. There was a time when people would spend hours sitting around listening to a new piece of music while they poured over every inch of the front and back cover, the liner notes, and the thank you section until they had pretty much memorized every assistant producer, godmother, and coffee getter who helped bring this music to life. 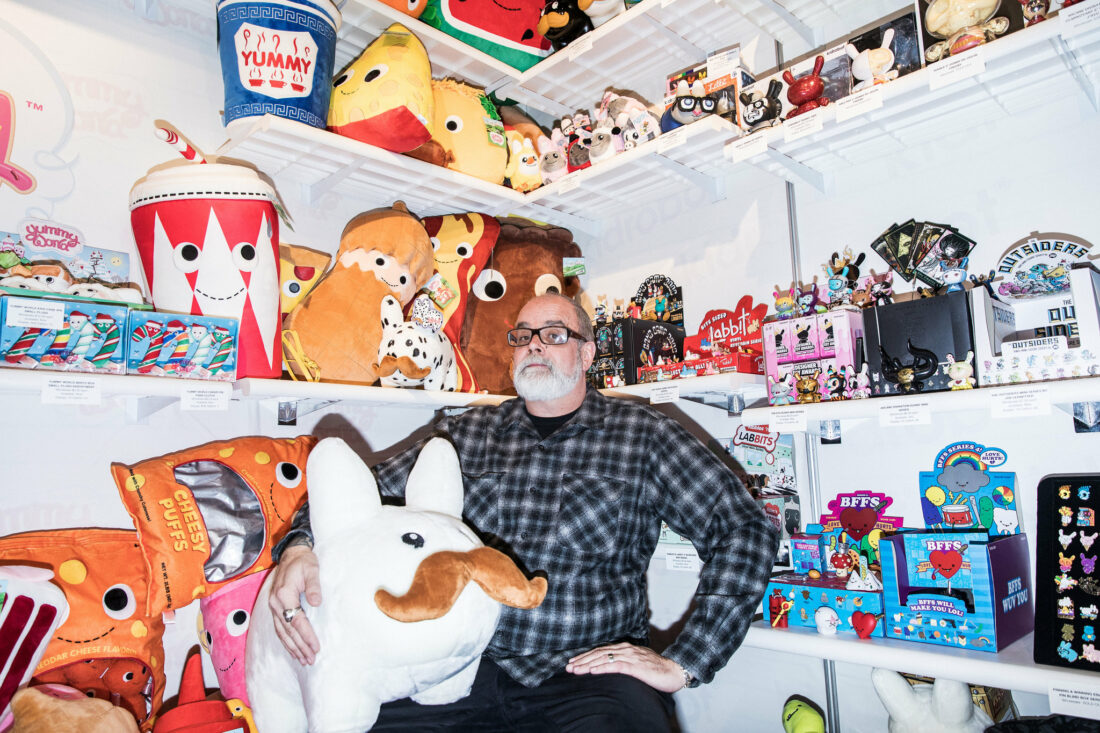 Frank is from that time, and he’s added layers upon layers to the experience for a lot of fans across the world. From creating a poster that commemorates someone’s all-time favorite band playing in their hometown to designing an album cover that a hardcore fan gets tattooed on them for life, Frank’s done it all.

In the late-’70s and early-’80s, Kozik was on the tail end of a stint in the military and got stationed in Austin, Texas just as the city’s punk scene was gaining steam. Because there wasn’t much of a tolerance for punk in the middle section of the country, the more progressive Austin would usually be the only stop on tour for bands on their way to California after covering the East Coast.

“My first night out, I saw a guy with green hair,” Kozik remembered like it was yesterday. “I had been listening to punk rock, starting around 1979 or so, but I had never seen a punk rocker.”

Kozik asked the newly discovered species what his name was, to which the punk rocker said “Billy Cringle” and “follow me.” Billy Cringle took Frank Kozik to a little place called Club Foot, which was a legendary punk rock new wave club that welcomed all kinds of freaks. Frank felt at home. 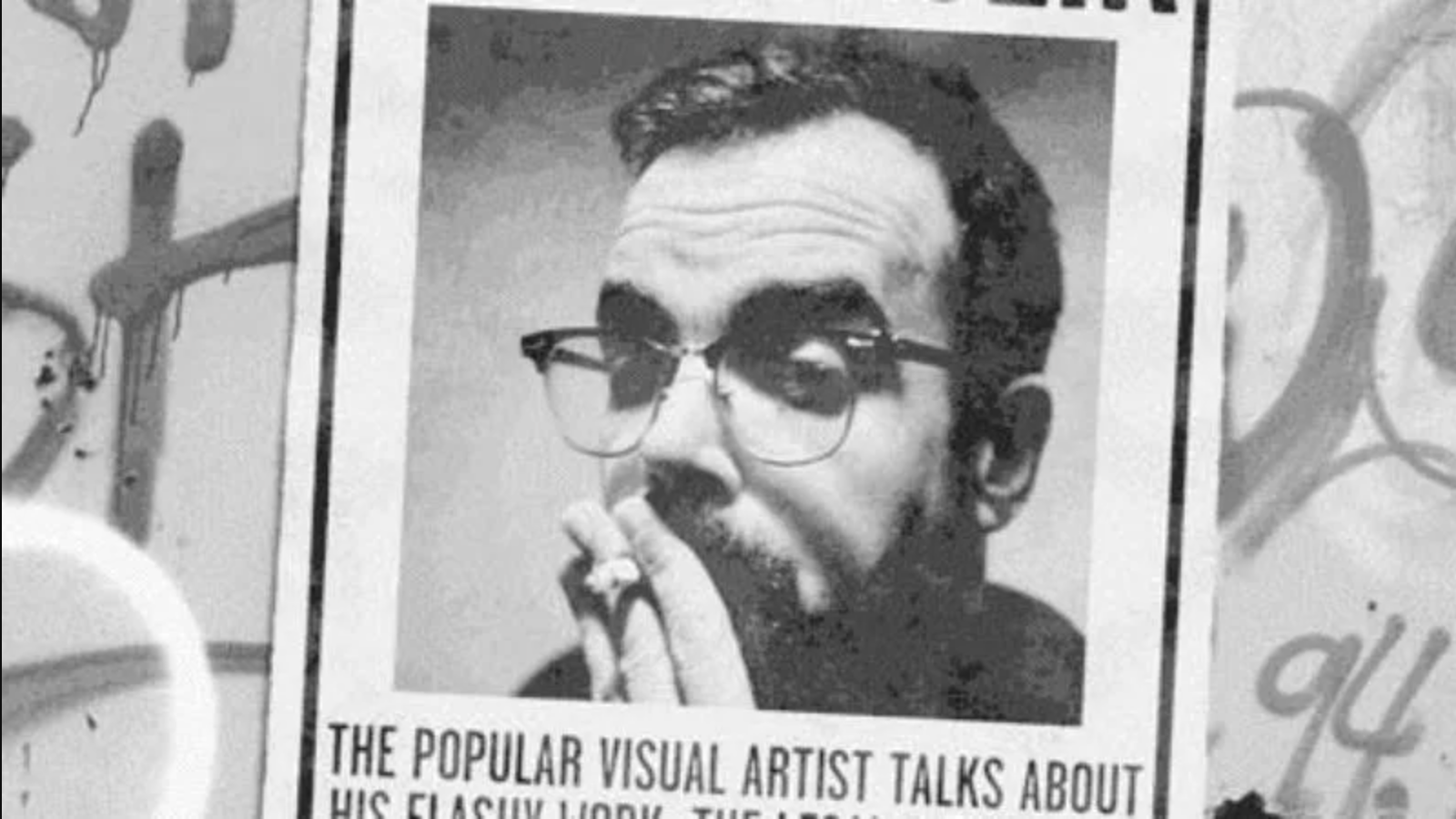 At this point, Kozik was also dipping his toes into another niche cultural scene, participating in the lesser-known phenomenon of mail-art, which I’ll let him explain.

“You would correspond with weird people all around the world, and this was pre-fanzine and pre-street art. You would just make weird shit and mail it to somebody.”

A lot of Kozik’s mail-art friends started bands or fanzines in the ‘80s, and he started working with some of them, as well as bands he was meeting in the Austin clubs, primarily making art concert flyers.

“I started doing little black and white Xerox flyers for local bands,” he said. “I had somehow stolen an employee card to run the Xerox machine at Kinko’s, so I’d go in there and run off like 50 flyers for free. Then, I’d go around town and put them up. And that became kind of a cool thing.”

When Kozik got out of the military, he stuck around in Austin and started working at some of the clubs, and met someone that would change the trajectory of his career forever. 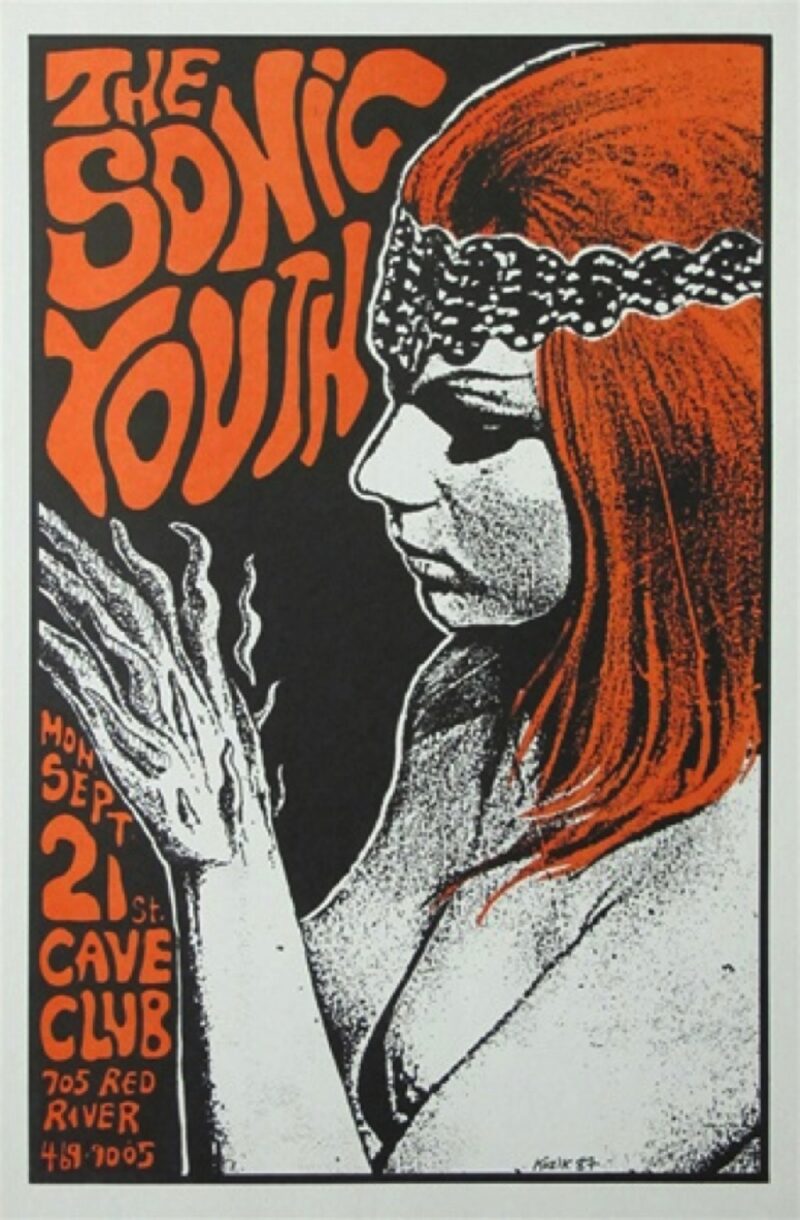 “There was this guy, Brad First,” Kozik tells me. “He was a really interesting guy, owned a string of punk rock clubs, including the Cave Club on 6th Street. He was this weird stoner guy and was really into posters and flyers. I was working for him, he would pay me and pay for the printing. So, I started doing posters.”

It didn’t take long for Kozik’s posters to gain traction, as Austin’s alternative weekly newspaper, The Austin Chronicle, began recognizing Frank’s work in their annual Austin Music Awards, where he consistently hit the podium in the categories of Best Concert Poster and Best Album Art for years. Personally, I think Kozik got robbed in 1989-90 when a K.D. Lang poster took home gold over this absolute gem he made for the Red Hot Chili Peppers for their trip through Texas. 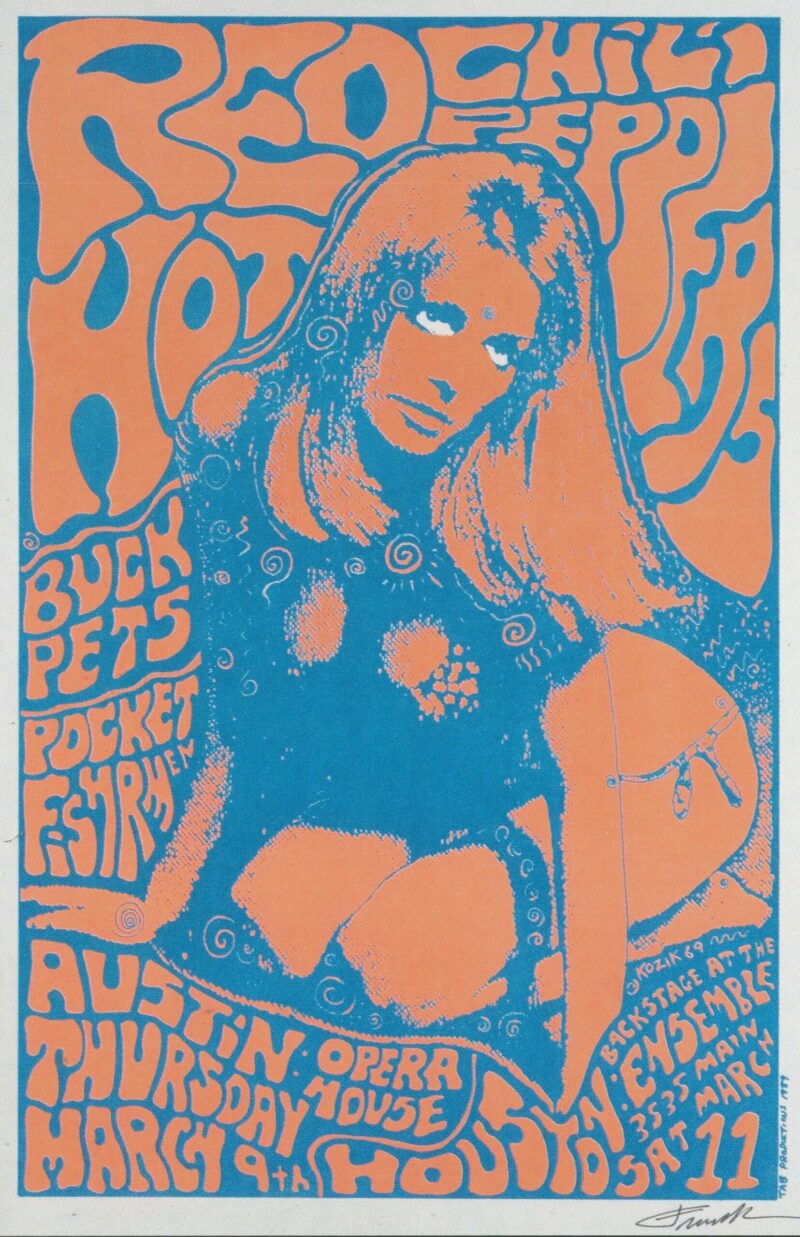 But Kozik isn’t tripping on that, the exposure from the Austin press helped him progress in his quest for more work in the music industry. Frank began working at a silkscreen shop, where he learned to silkscreen posters and t-shirts.

“I met all these bands on their first tours and did their flyers and posters before they got big and famous,” Kozik said. “Then when they were big and famous, they would say, ‘Hey dude, will you make a poster for us here, and here.”

Kozik went on an insane run, working with some of the biggest bands in the world right as they were ascending to stardom. From Sonic Youth and the Butthole Surfers to Nirvana, Frank was right there with all the new power players in rock, giving fans iconic imagery to remember these shows forever. And the legend of Kozik only grew larger as bands and labels around the world began seeing his work. 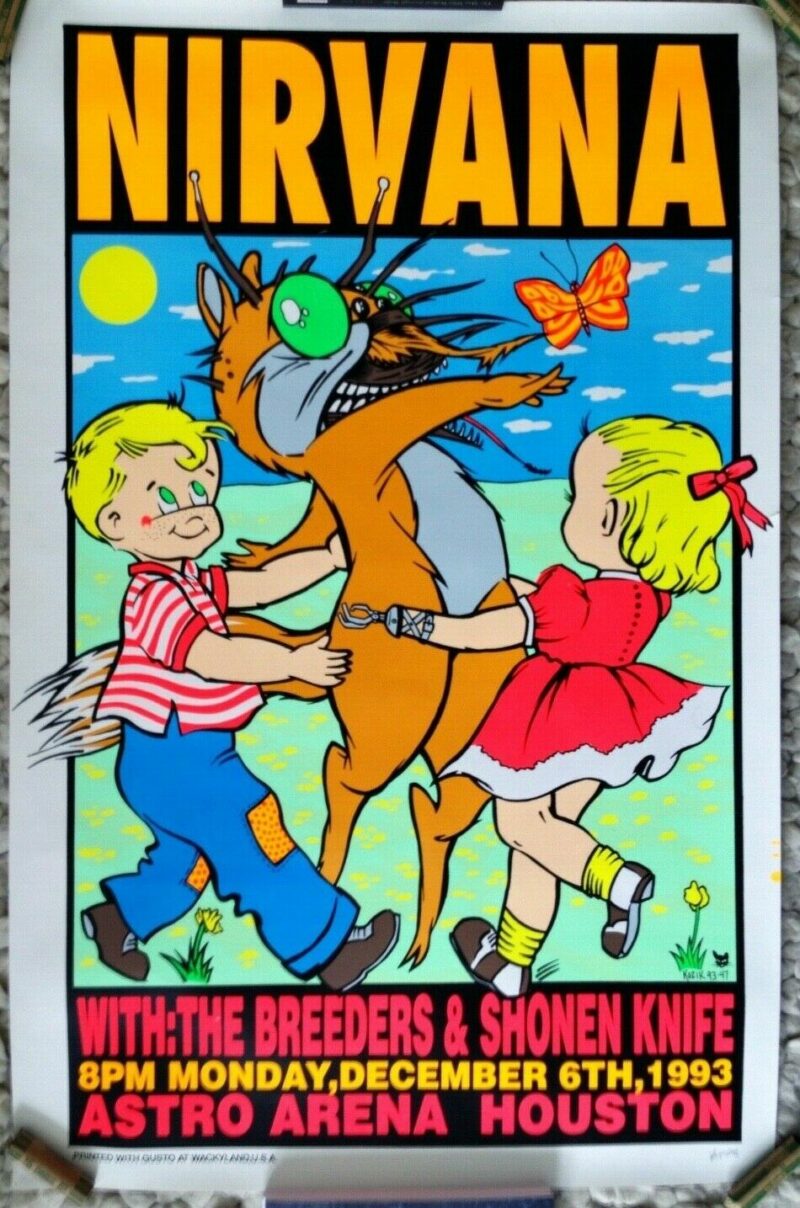 “I would try to do a poster that was the reverse of what anyone else would do for that band,” he explained. “But it still made sense in some fucked up way. If you have a band called Hammerhead, most people are going to do a dude with a hammer for a head, or a hammer hitting something. Or they’ll use a picture of the band. Well, then it’s like what’s the point?”

Kozik’s weird, fucked-up posters have become timeless art pieces, highly sought after online 20 to 30 years later. A signed poster Kozik made for Nirvana’s first tour stop in Austin fetches close to two grand on the resale market, and others go for even more. Way more. 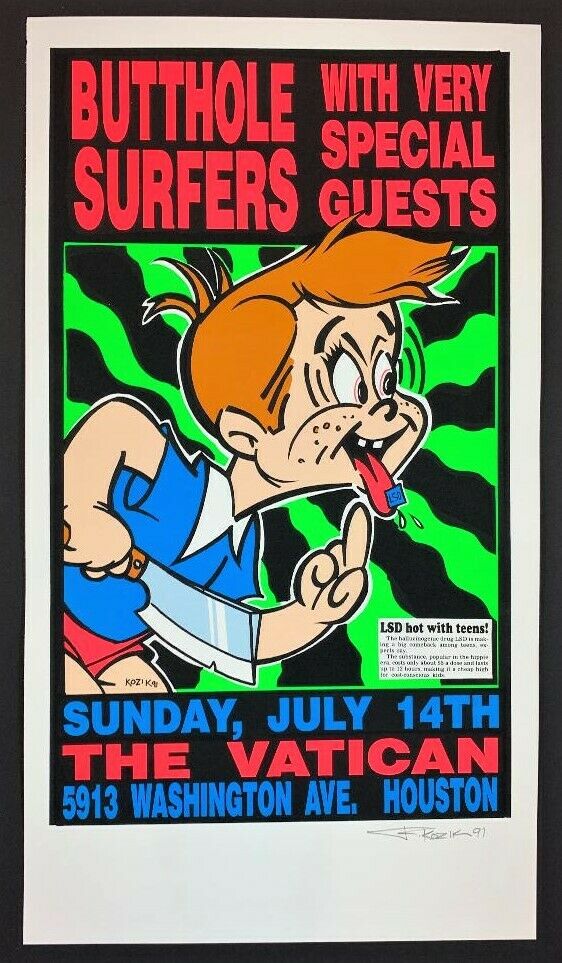 Read: The Internet is a Treasure Trove of Classic Kozik Pieces

Kozik’s footprint in the community grew exponentially in scale and eventually, he began flexing his artistic muscle in other ways. He was successful in the fine art field before realizing that the time that went into these pieces made it unsustainable to continue, even when he was fetching five-digit prices for his work.

Kozik also founded and ran a successful label for years with Man’s Ruin Records, helping friends and other bands he liked to put out whatever they wanted, really. He let them explore any musical territory their hearts desired on their records, and he made all the artwork and promotional materials. Everything split down the middle. That was the deal. Where else are you going to find a label where you get 50 percent of your music revenue and also get all your artwork done by Frank Kozik?

He began going to Japan and fell in love with the country’s brand of pop art and toys, namely Hello Kitty and other characters the Japanese felt were just for children. But Kozik saw the future and knew these toys would be seen more as collectibles than play-things, especially in the US market. 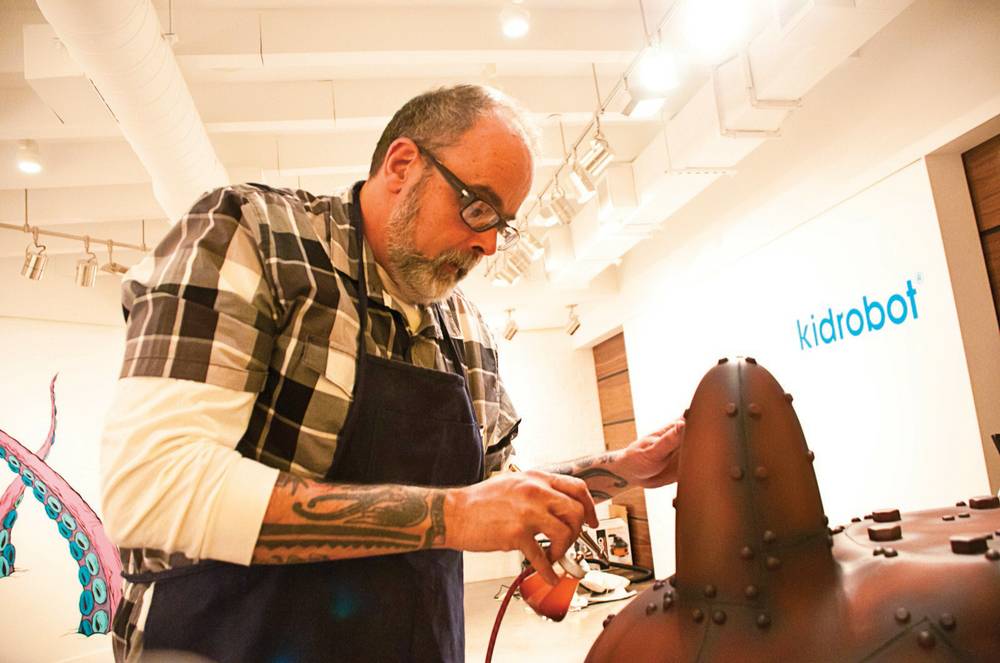 “I was really into models my whole life,” Kozik said. “When I was a kid, I got really good at building models. As an adult, I would build crazy models and got into RC airplanes for a while. I’ve always collected weird things. When I buy a thing, I try to think about who designed it, where was it made. So, with the toys, my trip comes from a fascination with the process and the end result with the packaging. It’s kind of like a poster but three dimensional.”

Kozik began designing and making vinyl toys and other small sculptures, finding an entirely new fanbase all over the globe. His Smorkin Labbit character has become a worldwide phenomenon and has become a licensing smash hit, producing a long list of collaborative toys with the biggest properties in the game. But that doesn’t mean Kozik isn’t still making all of his fucked up weird shit. It just means we get a healthy mix. For every Batman Labbit, a Bondage Labbit to sit next to it in your collection. 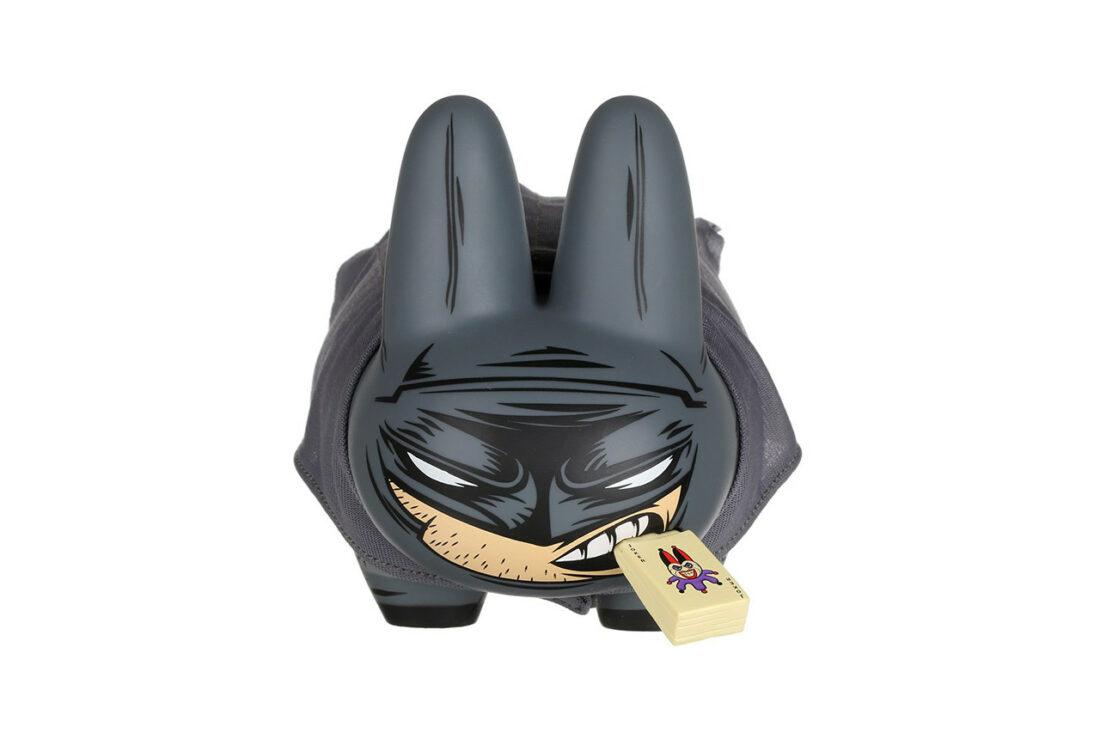 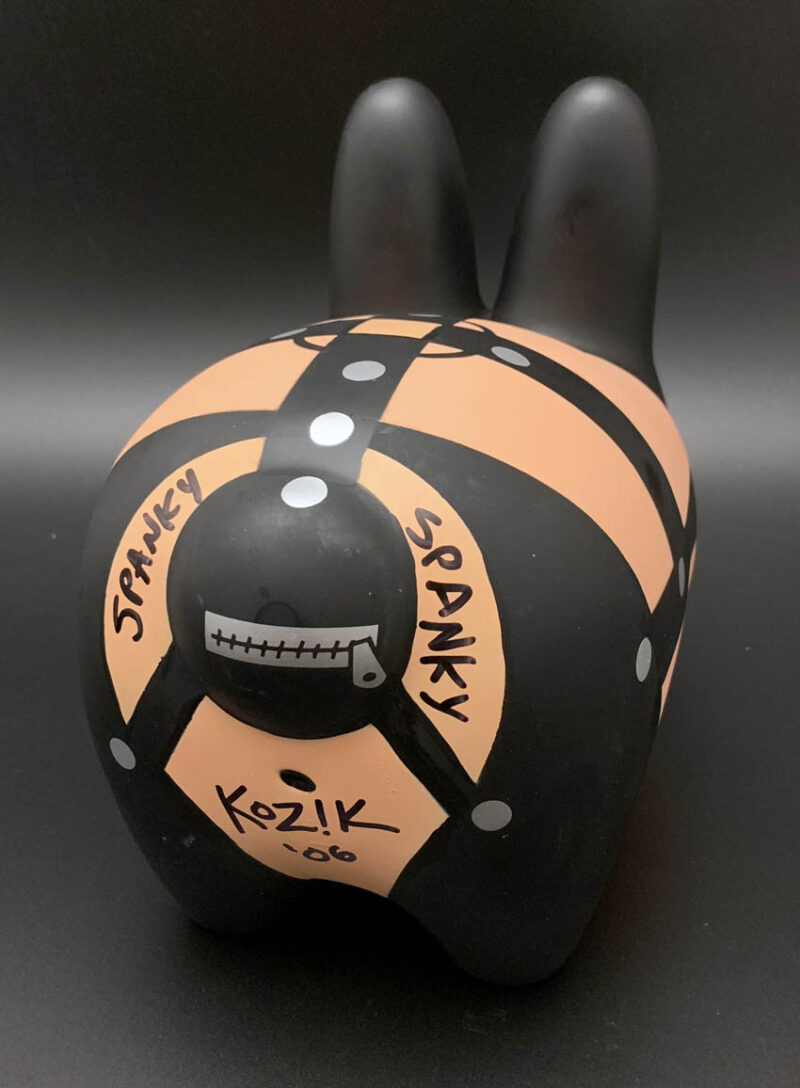 “I was going to Japan and hanging out with these really high end, fancy, rich, fashion people,” Kozik begins as he tells me the story of how the Labbit was born. “They had this preconceived notion of what an artist was and they got really surprised because I was obsessed with Hello Kitty in the ‘90s. I collected Hello Kitty stuff, it was just really perfect and cool. They thought I was going to make like eight hookers carrying me up Mt. Fuji or whatever the fuck they thought. I told them I wanted to go to Puroland, the shitty Hello Kitty theme park in Japan.”

They thought Kozik was insane. They couldn’t understand why he was so infatuated with a toy that only little kids played with. To them, Hello Kitty was a trashy toy, almost like a Beanie Baby in our culture. Frank had to explain to them that from the American perspective, Hello Kitty is really pure and interesting.

“I had to give them this bizarre education on why it was so genius,” Kozik said. “She has no mouth but yet she speaks!”

The wealthy Japanese businessmen were interested, and they wanted Kozik to make his own character like Hello Kitty. While they sat in a restaurant bar, Kozik came up with just the thing. 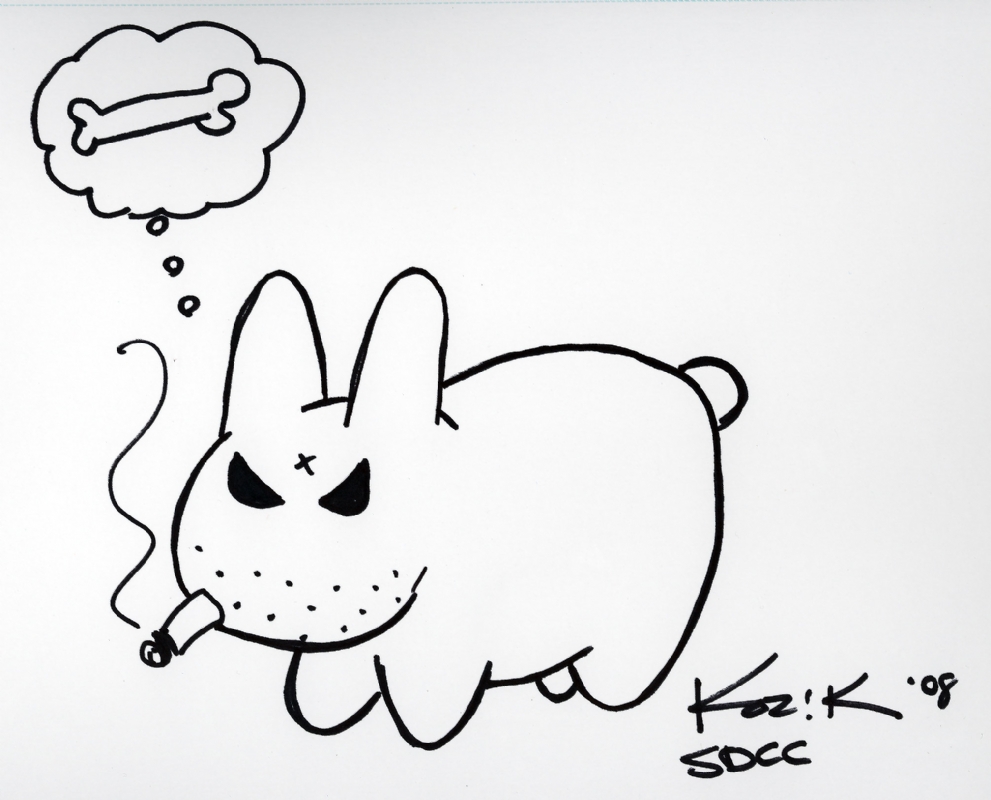 “Maybe Hello Kitty has this dude she booty calls because Dear Daniel has a little dick,” Kozik said. “So, I drew this little lumpy rabbit who’s all dirty and smoking. This guy goes to Hello Kitty’s, fucks the shit out of her, borrows $20, and then splits.”

“Originally, it was supposed to be called ‘Smoking Rabbit’ but when we made the first toy, the factory over there messed it up and the packaging came back as ‘Smorkin Labbit’ which was so much more genius than anything I could think of. So, I said fuck it, I’m changing the name.”

Everything by accident, as Kozik says.

After working together for years on the Labbit and other toys, Kidrobot, one of the biggest players in the toy space, wanted more from Kozik. The Boulder, Colorado-based company named Kozik their creative director in 2014, and it’s been a decision that has been quite fruitful for both parties. Kozik’s vinyl toys are a hot commodity and have catapulted him to another level of cult fandom that Butthole Surfers posters simply couldn’t have. 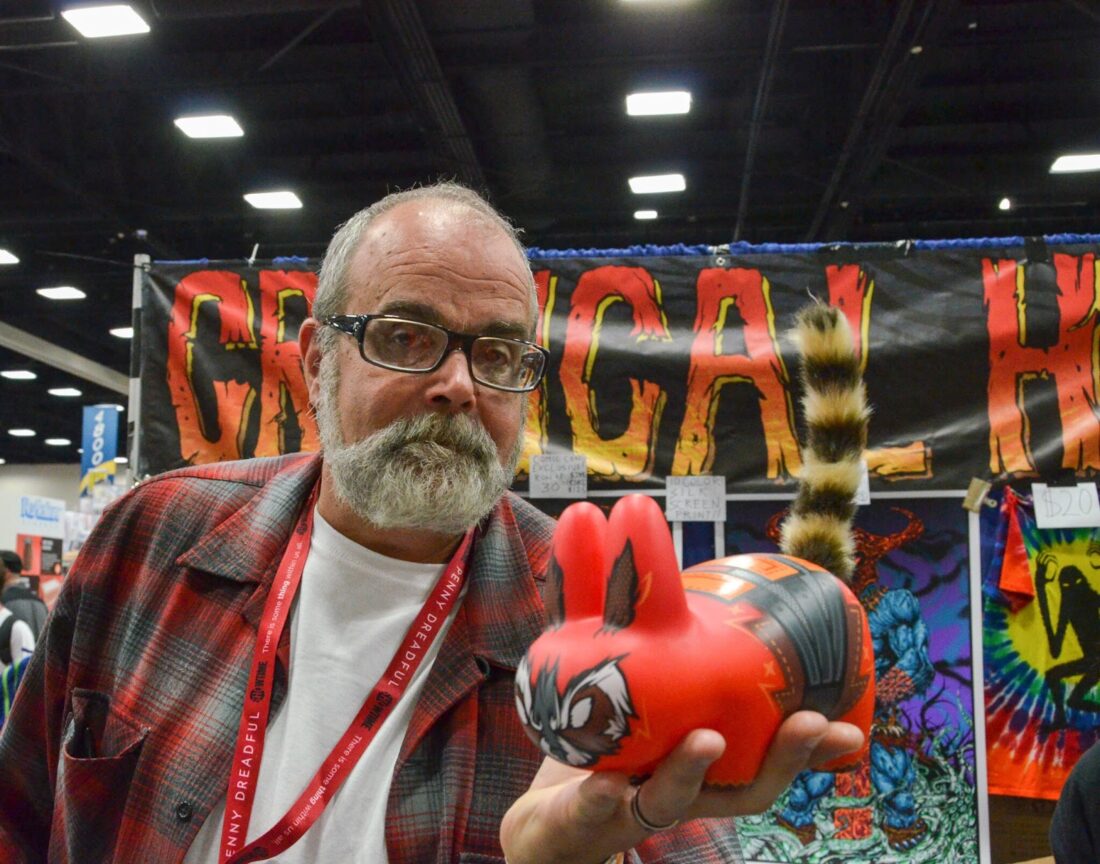 “When you make a successful toy, it becomes really important to a certain amount of people, almost like a pet,” Kozik explains. “And that’s really interesting. I do it, too. I fetishize my objects. So, to design an object that not only gets highly absorbed by humans in our culture but in other cultures, too, is really intriguing. I feel lucky to be able to communicate basic concepts.”

“In art and communication, basic concepts are super key, and it’s really hard to do. It’s easy to draw something ultra tweaky and complex. It’s super hard to draw something simple that works. My trip with the toys is doing something that’s really simple but can turn into almost anything the observer wants it to be.”

SHOP THE HUNDREDS BY FRANK KOZIK