This post serves as both an introduction of myself and an unveiling of a new studio space that I have been working on with friends for the past months.

First off, ME. I’m honored to be contributing to The Hundreds blog as the first on the ground Australian content provider. I’m coming to you from Collingwood, an inner city area of Melbourne, Australia. My name is Callum Preston, and I’ll be bringing you the happenings in my life here while trying to share with you a lot of the amazing ideas being born, work getting created, and spaces being setup here in my hometown. I’m not technically qualified in anything, but my day-to-day consists of graphic design, video production, mural painting, imperfect carpentry, sign writing, set building, interior design, and whatever else I can talk my way into. This type of behavior means I continue to meet new people doing awesome things in a variety of pursuits. I’m excited to now have a place to share these discoveries with you all.

Which leads me to this post: Everfresh. Here is a quick-fire history. The Everfresh Crew was born here in Collingwood in ’03/’04 – a group of graffiti writers, stencil artists, bombers, and illustrators who would gather in the back corner of a mechanics workshop that offered up the area if we would clean the foot-thick bird crap. It was a place for Friday night beers followed by street missions, and a home base for creating larger pasteups for later placement on the streets. As well as a storage space for the tools needed for larger walls that were secured by door-knocking, friends of friends, careless renters, or for “beg for forgiveness rather than ask for permission“-type situations. Eventually, in the summer of 2005, a larger space was secured around the corner, and a much more cohesive studio space was set up – subleased from a screen printer and shared with all kinds of people.

Bobby Hundreds visited us in 2011 while he was in Australia and blogged his photos HERE… a space filled to the brim with art, tools, junk, a 7-foot Carpet Python, and a bunch of people working on various projects. In 2013, our time in that space came to an end, it was a mammoth task to pack up and move a space that had nearly 8 years worth of studio work mixed in with varied amounts of junk hoarding, funny roadside finds, and epic dumpster scores. (600 VHS tapes anyone?) But it was our time to leave. We found a temporary home in a gigantic vacant warehouse, but we knew we had to find the right space for the next chapter of Everfresh. What we found was to become our new home: Perry Street. 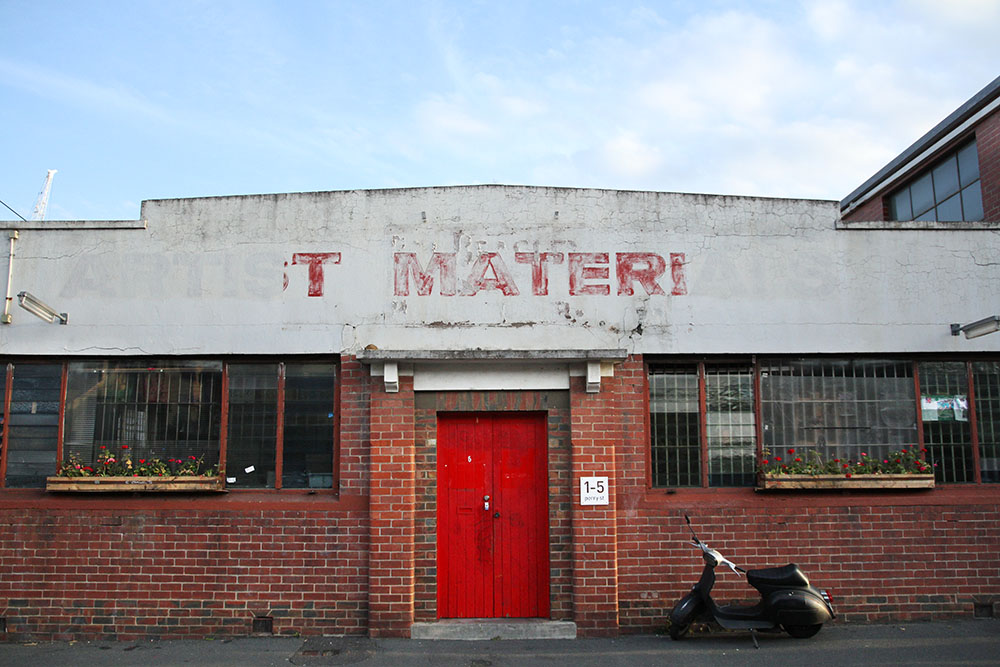 When we secured the space, it was a blank canvas with terrible water pressure, electrical nightmares, a floor that felt like a trampoline (not in the good way), bad lighting, and not much else. But it was OURS and we saw the potential. What we wanted to build was a space that could house our current studio lineup (Rone, Wonderlust, Mike Maka, Tom Civil, Mayo and Myself AKA The Tooth), but also have room to bring in other people who would contribute to the overall creativity and productivity of the new home. In this case, those people are Dangerfork, Nicole Reed, and Safehouse. We also were able to build out some further office space for local creatives to hot-desk. We wanted to keep the entire space creative industry-based, and we are stoked to say it is and feels like the hub that we wanted. (Shouts to our fellow crew members and former studio space holders doing big things around the world and here – Meggs, Reka, Sync, Dr Prisak, and Phibs).

This picture was our inspection of the space, below was during the renovation with about two-thirds of our stuff moved into the open space, we realized, quickly, that storage was going to have to be smart, and that we needed to cull more crap. The rooftop views are nice though. 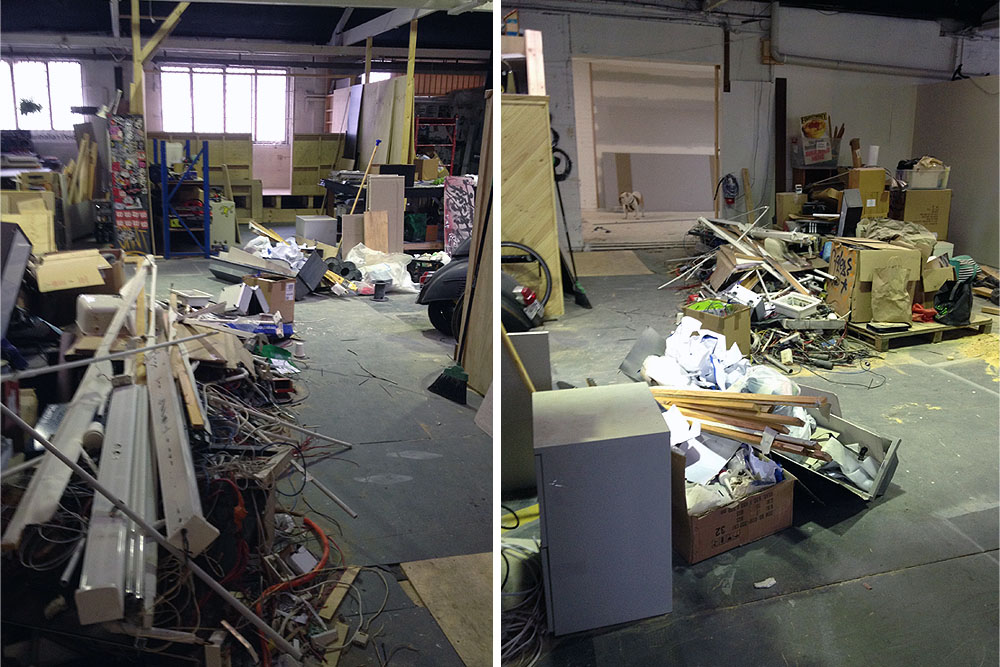 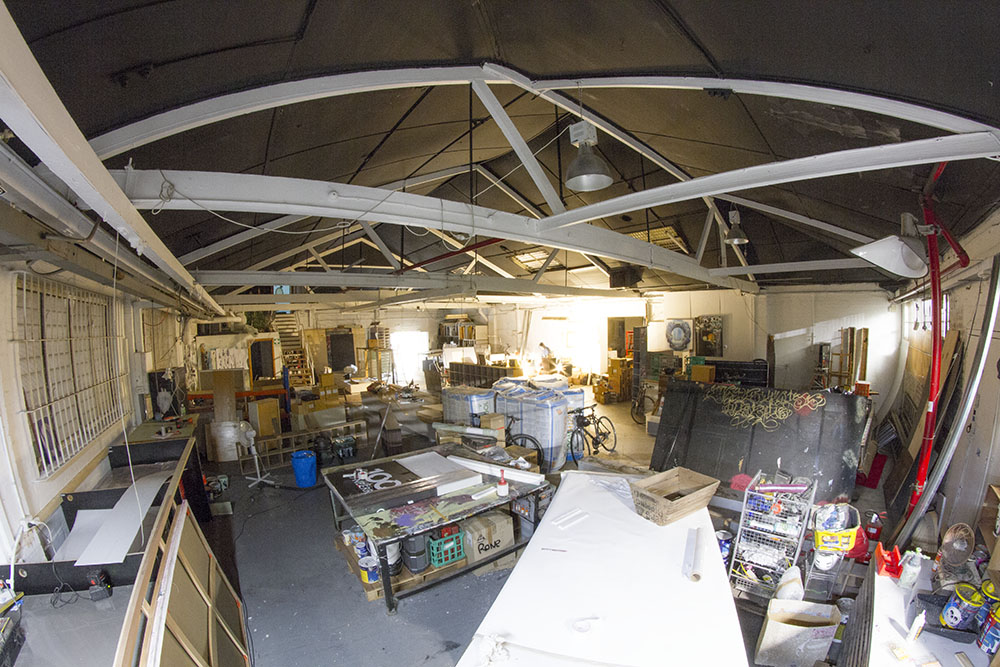 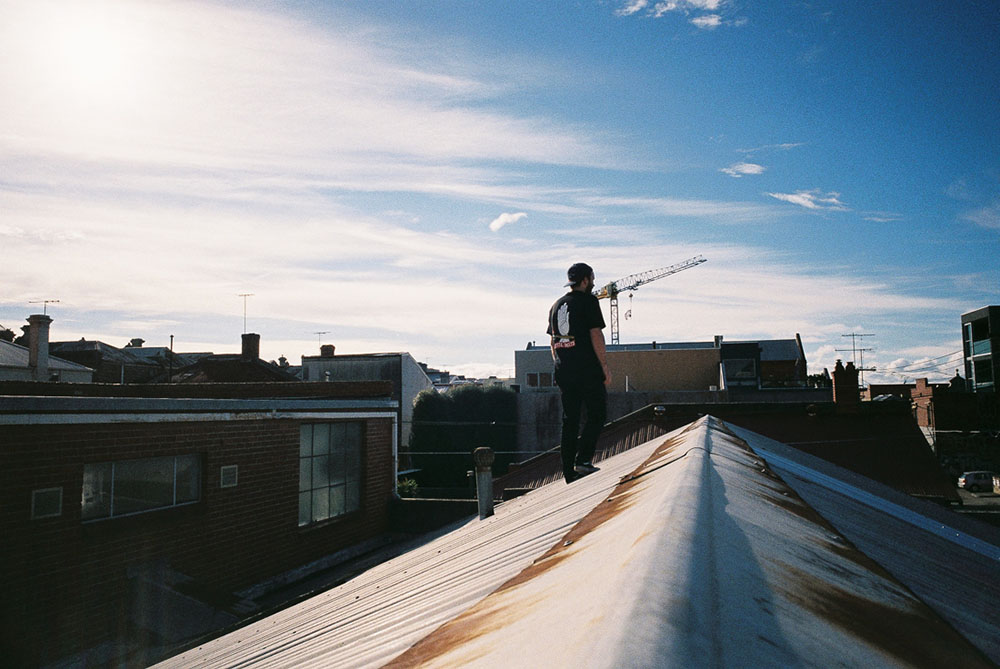 Everfresh has always been a private studio space, but gets a lot of requests to visit via email and Instagram. After months of working on building our individual spaces, we decided that it would be cool to open up our new home for one day only and have anyone that wanted to check it out come along. We ended up with nearly 2,000 people coming through the doors over the course of the 5-hour open house – an amazing response and awesome experience to get to meet and chat with people from all walks of life who have followed the studio and artists during our time. 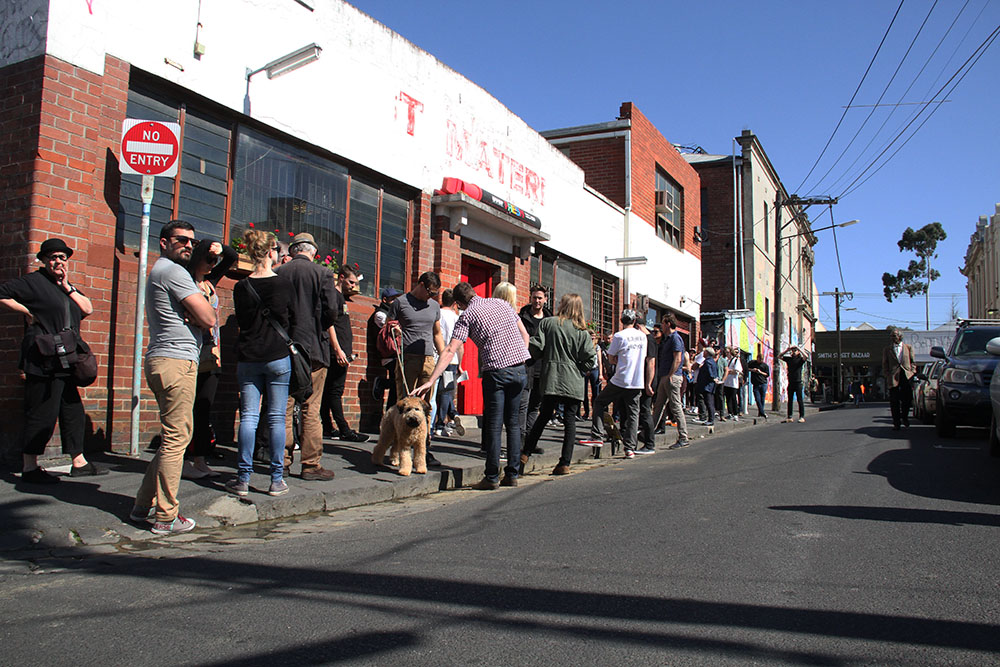 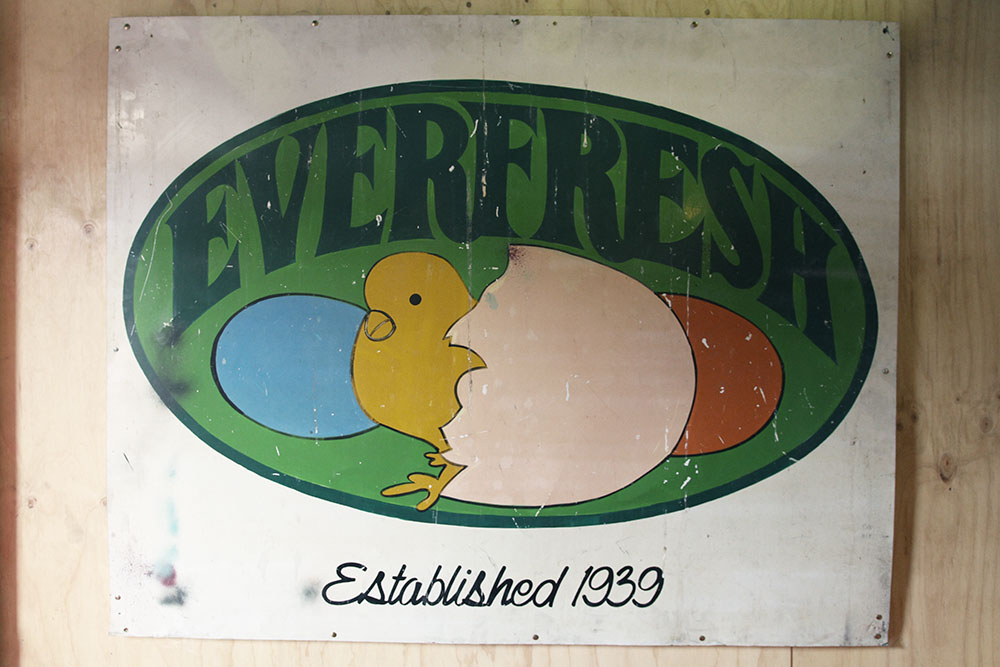 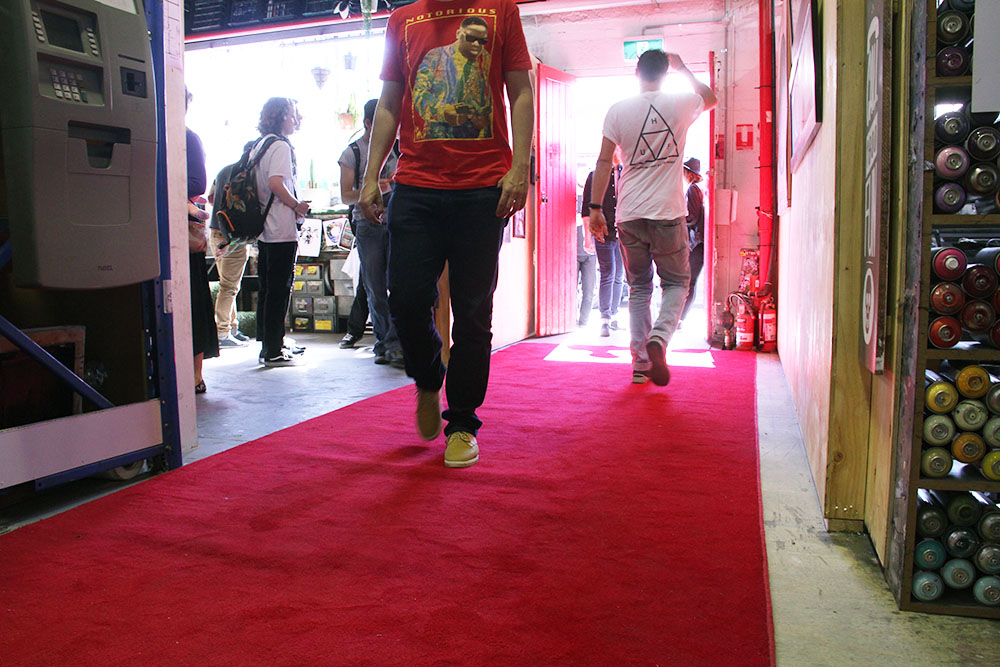 Another first for the day was the opening of the new Dangerfork storefront selling a huge variety of hand printed posters from local and international artists, as well as a limited edition “Everfresh Sketchbook,” which came with one off drawings, screen prints, stencils, tags, and stickers from all the members of the studio, along with friends of the studio who stopped in while we worked on them. 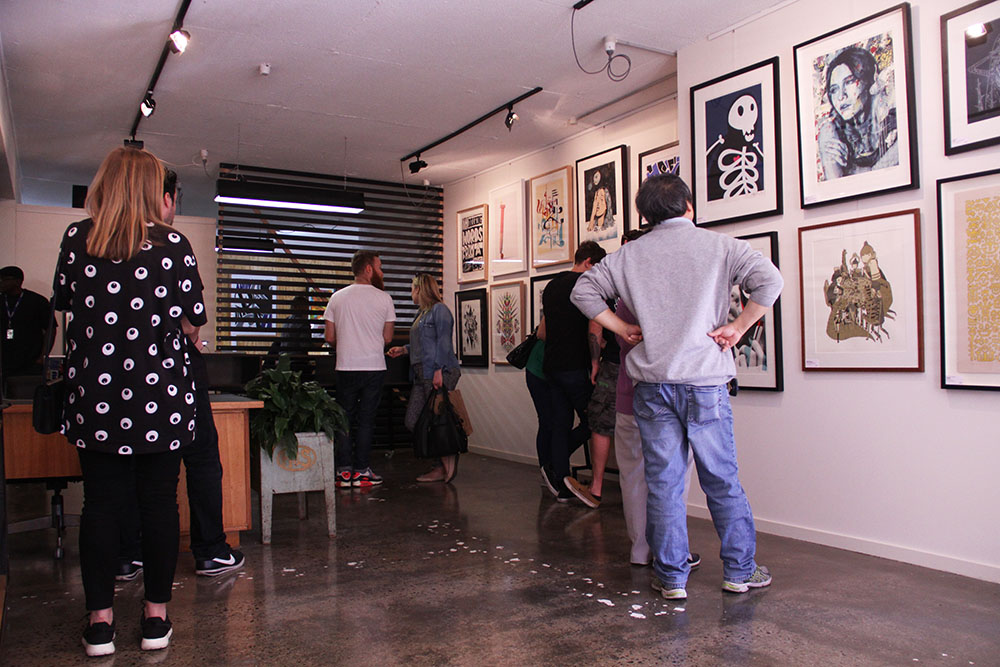 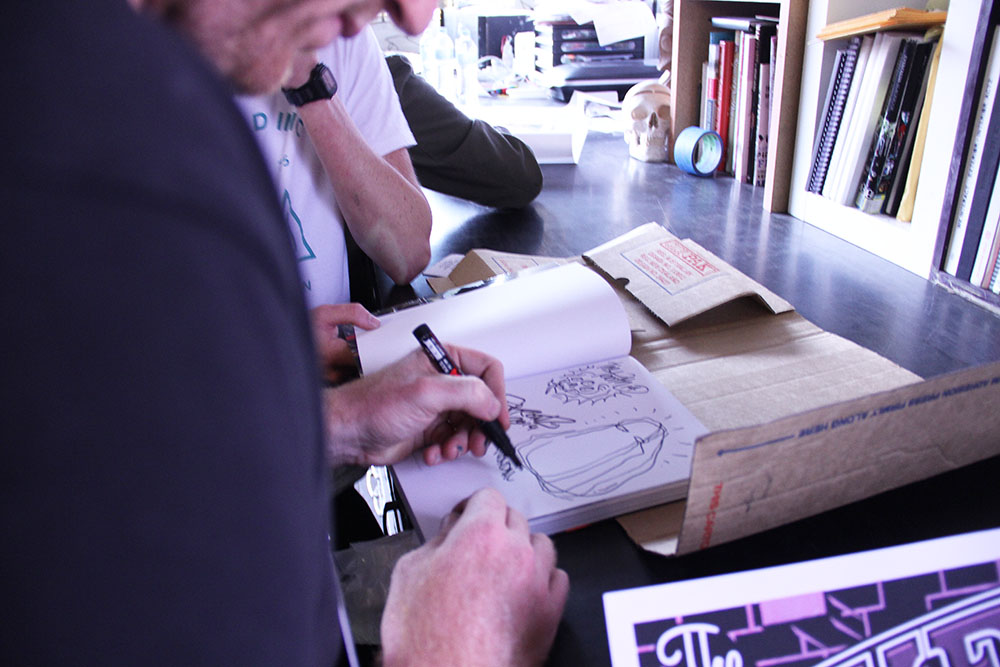 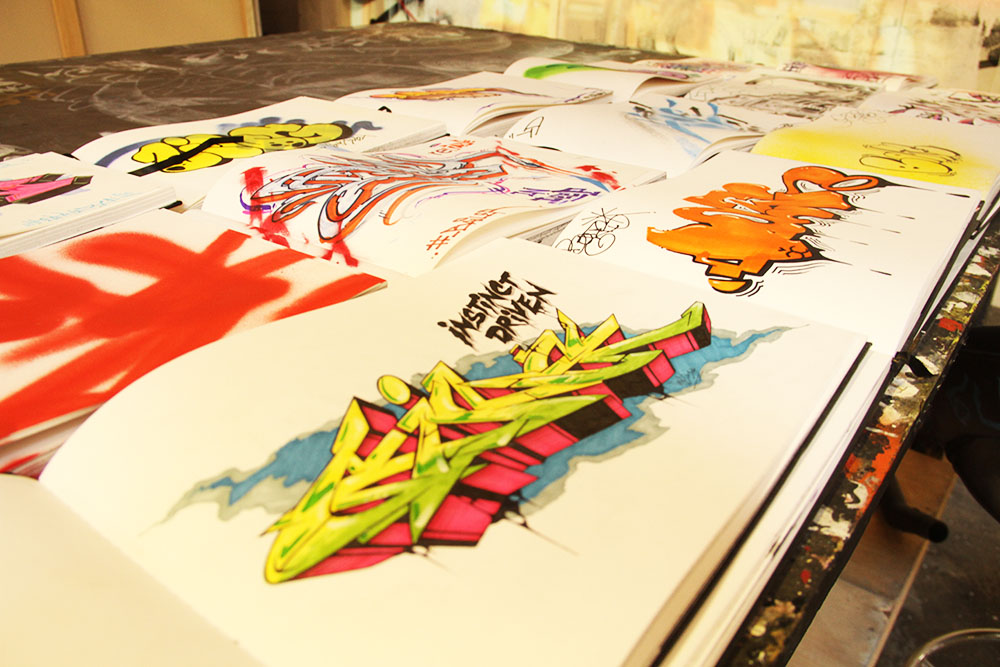 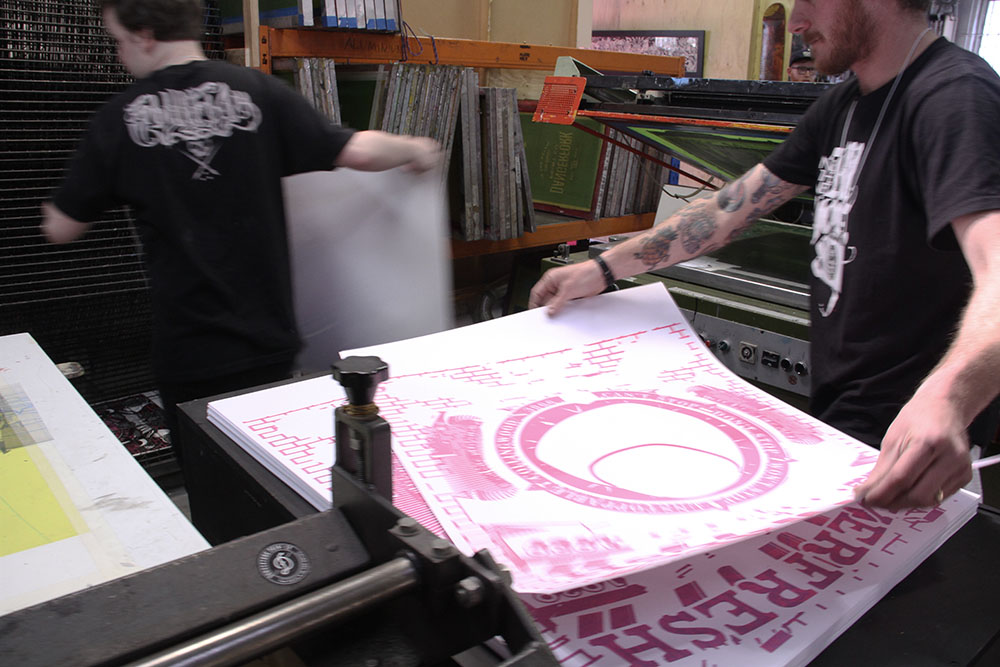 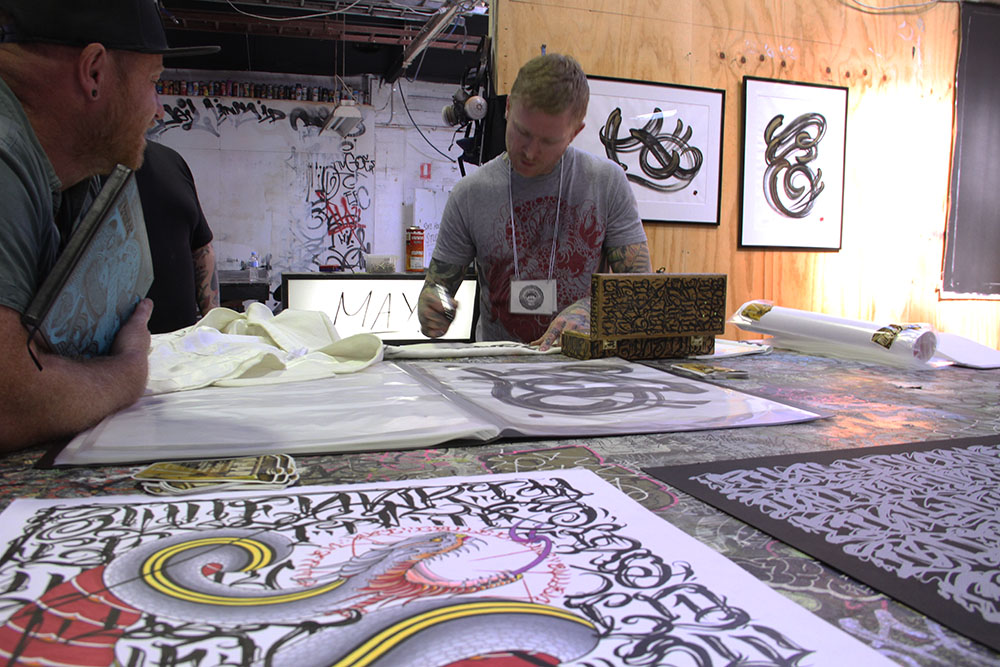 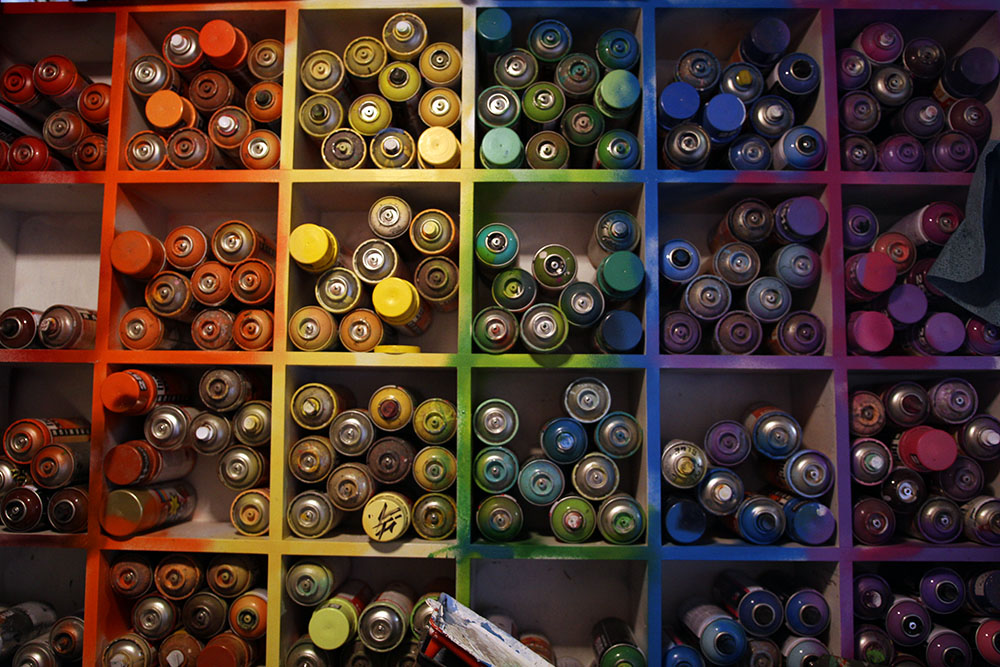 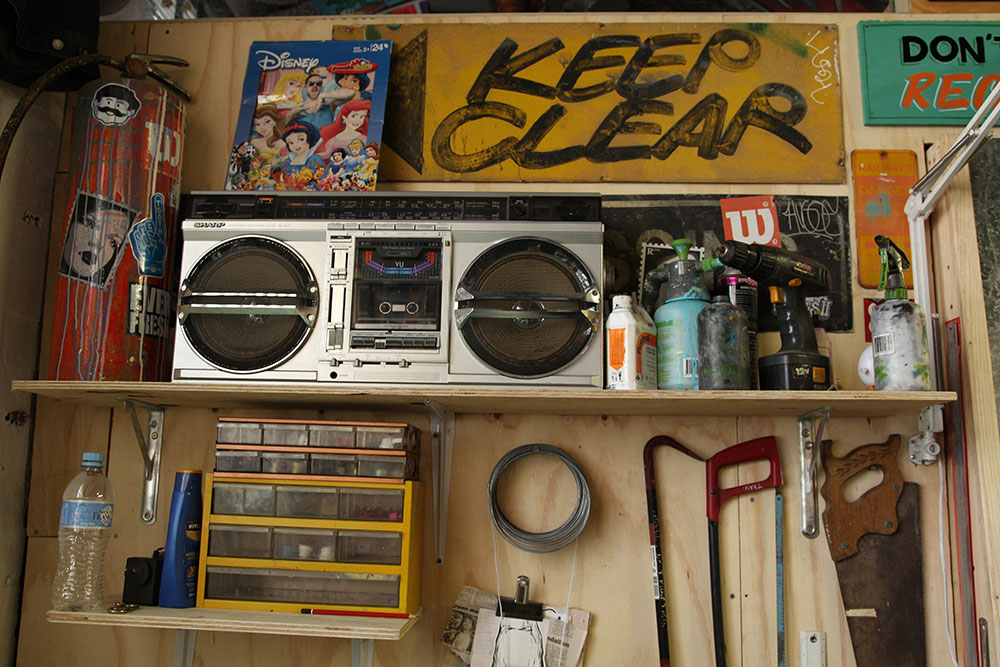 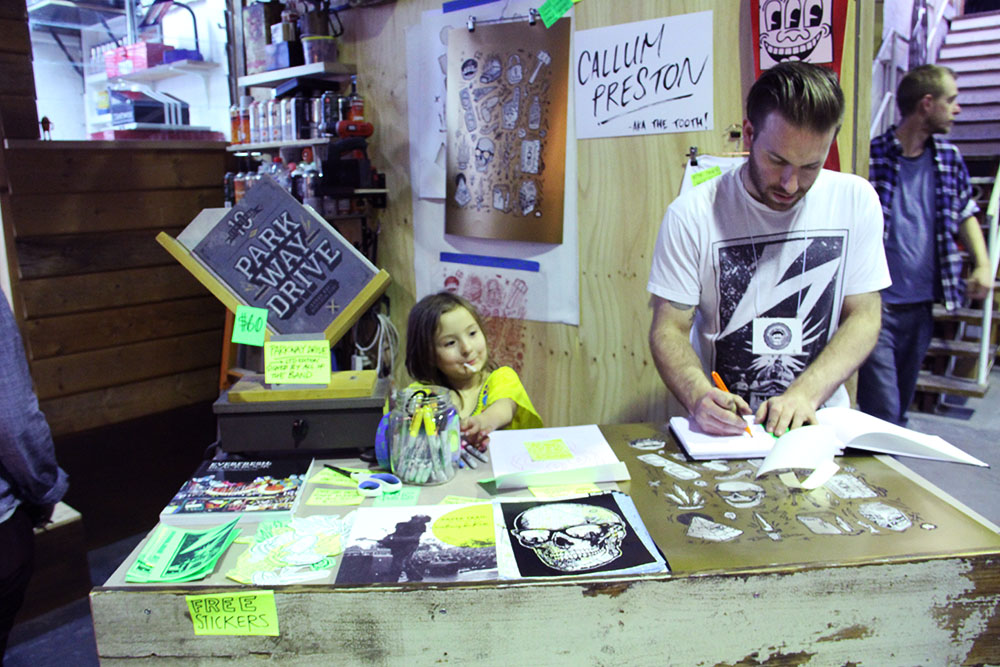 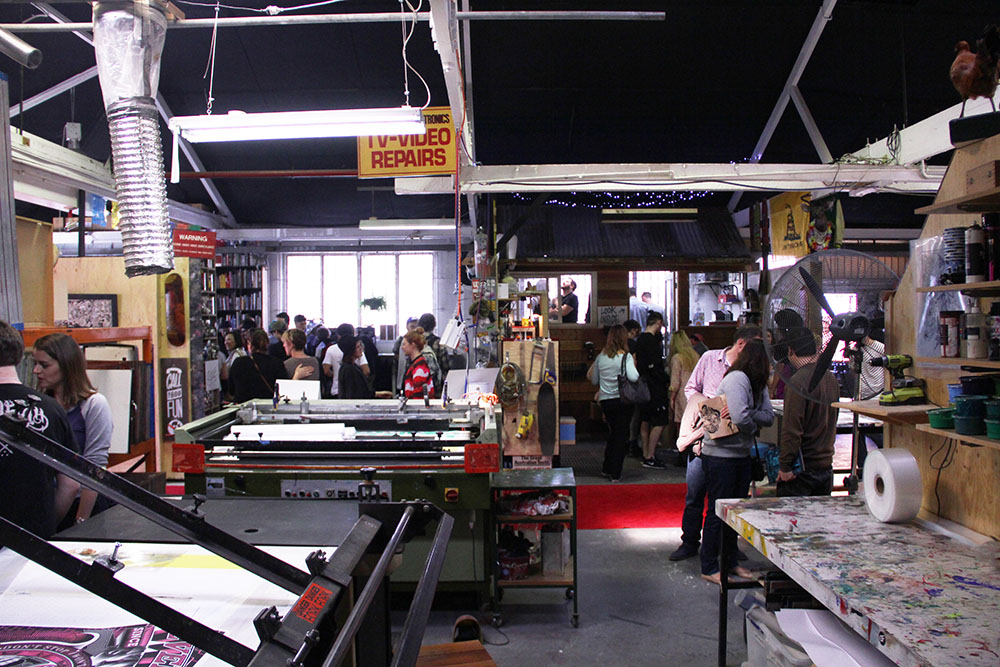 I needed a clean office space in my area along with a workshop/studio area. So rather than box it off with a boring wall, I decided to build “The Shack” out of materials that I scavenged from some demolition sites and were given by some generous friends. (Cheers Greg!) You can see it here, but there is much more to come for “The Shack,” but I’ll save that for a future post. 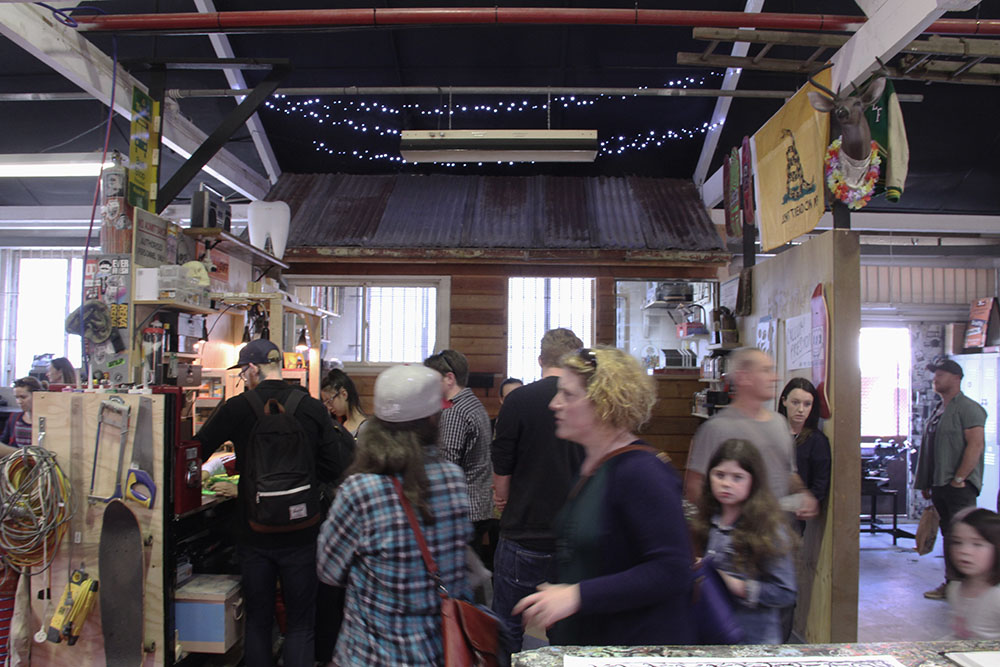 Rone at work for his upcoming “LUMEN” solo show. 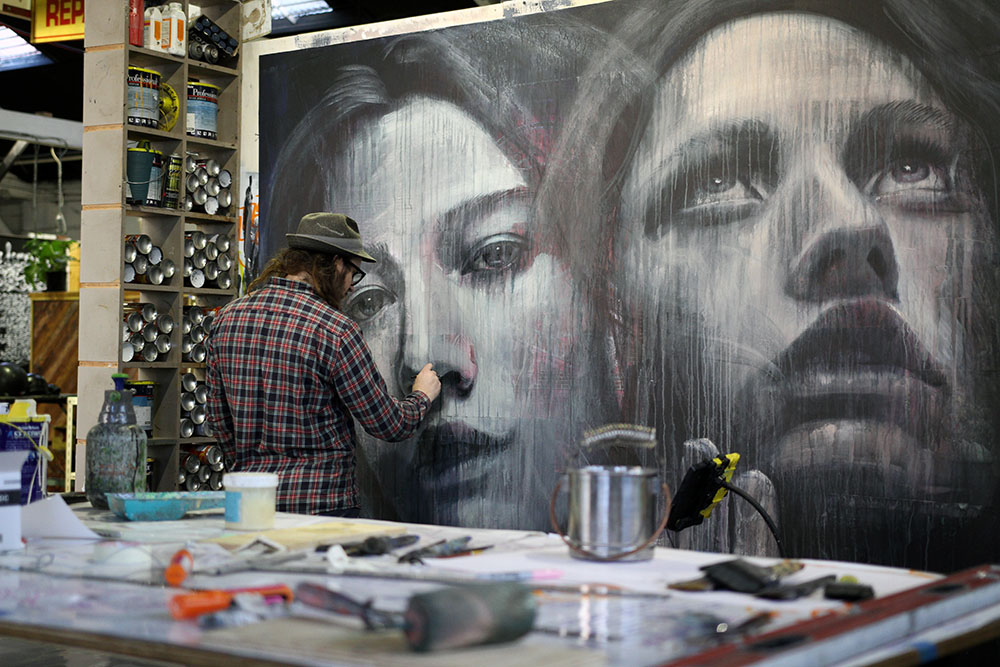 Mayo in the lettering vortex. 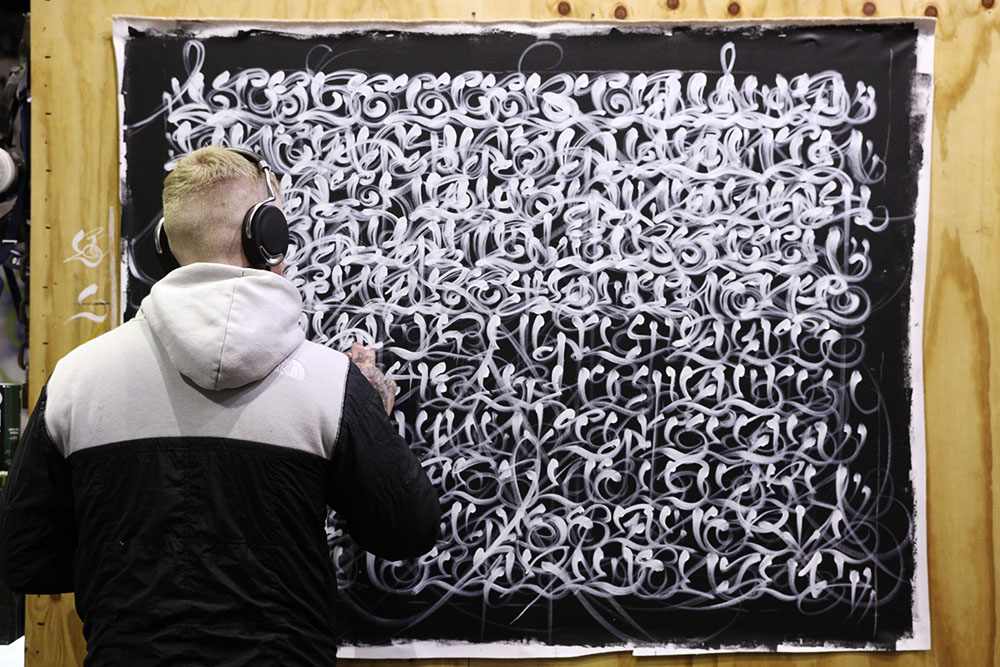 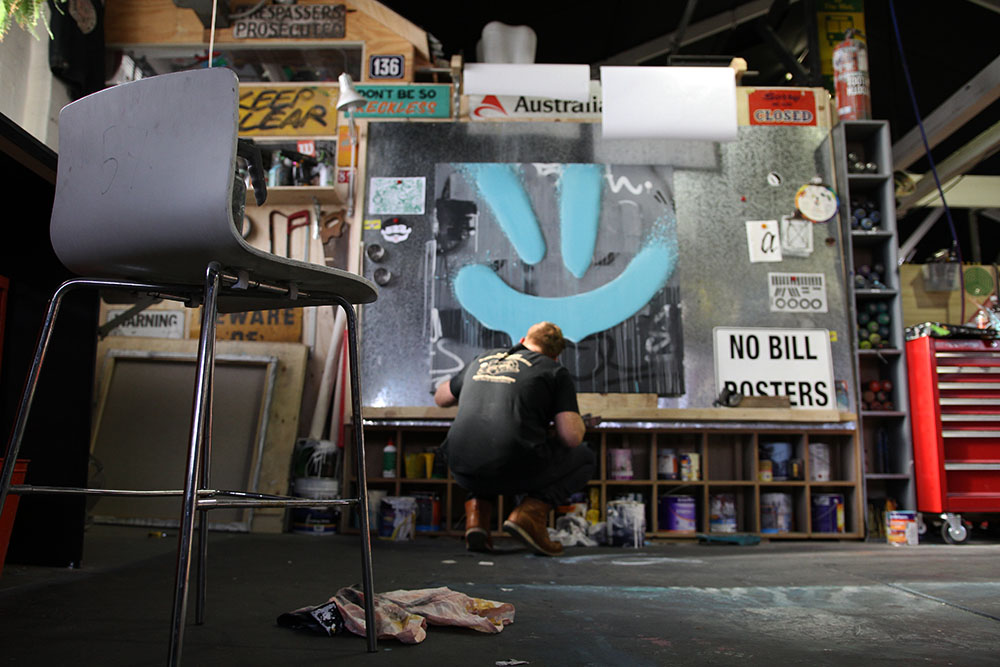 It was my birthday a few days prior, so I decided to bring in my cake that was made for me. A placeholder until I catch up with Bobby and he hands me the keys to his. 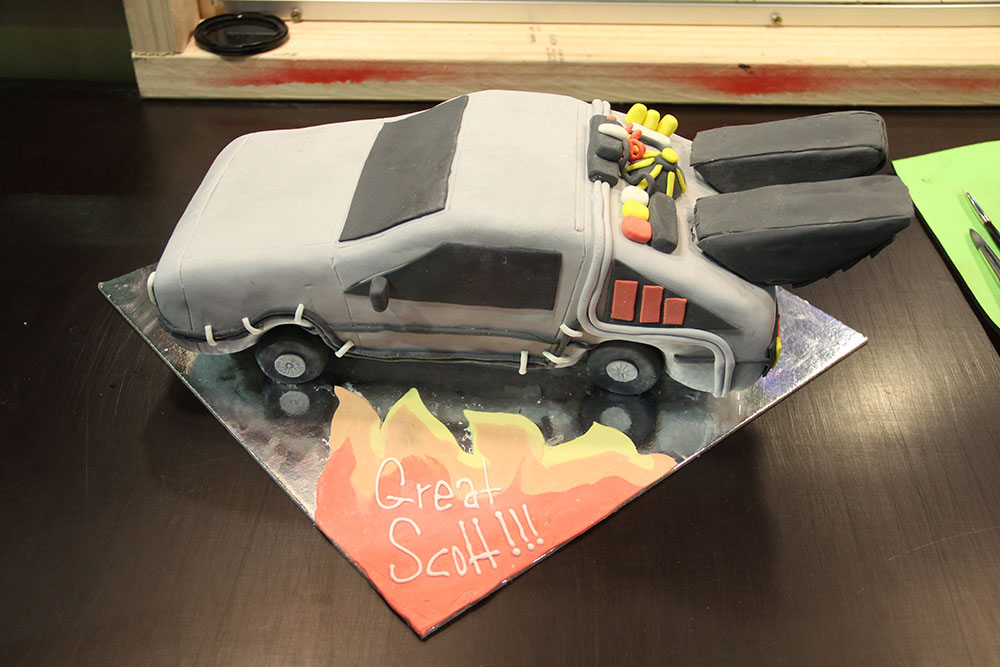 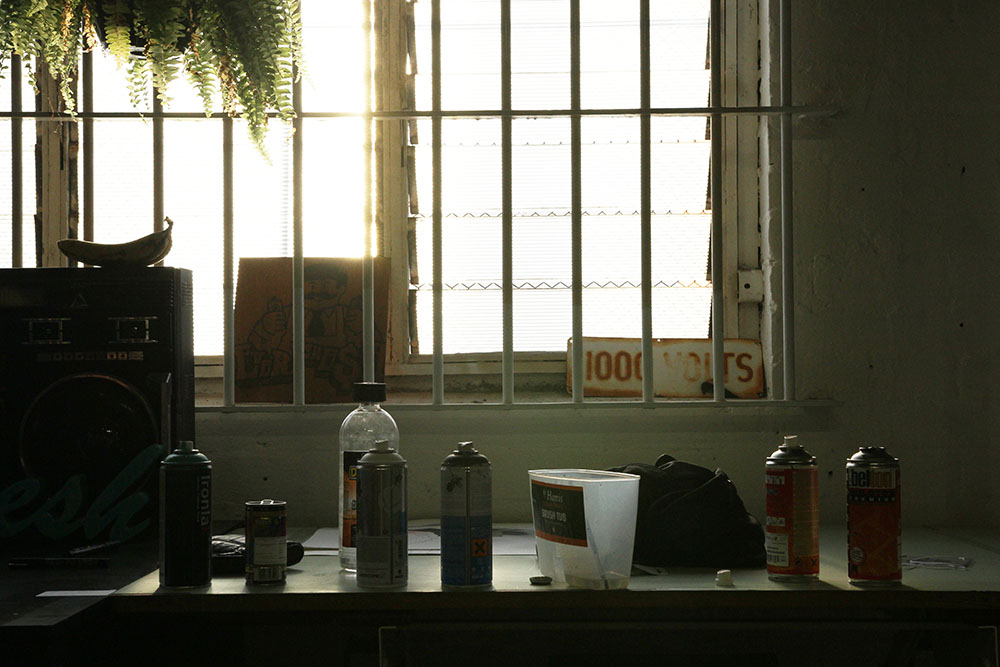 Thanks to everyone involved and all that showed up. We aren’t going anywhere, and this new space really feels like its gonna push us all even further. Can’t stop, Won’t Stop. It’s back to work for us, please close the door behind you. 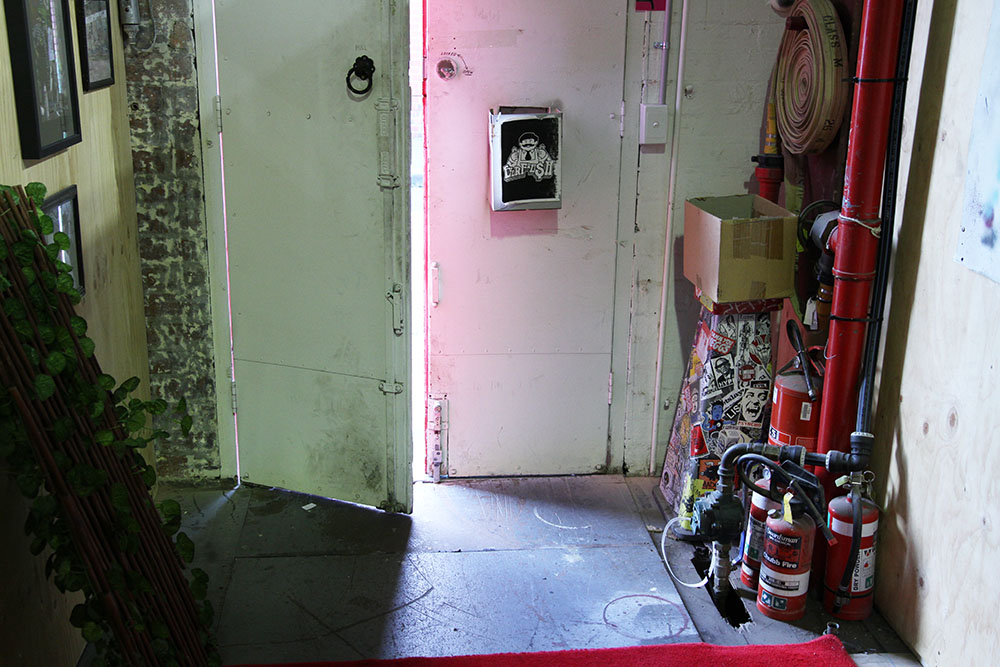