“Emo Cat was an accident,” says Andrew Miller. Not exactly a detail I expected to hear about one of the most featured and beloved characters from the cartoonist/animator, who has amassed quite the digital following within the past year.  Miller, better known by his ‘Drew Toonz’ alias, has developed a legion of followers online by posting daily cartoons following the adventures of this star character. “[Emo Cat] is this character that was super depressed and broken hearted, and I used [him] as therapy to express those feelings and get them out,” he reveals. “Nobody knew about [him] because I had no followers, but then it started to develop–and I can’t quit it now because I write the material so naturally, opposed to the other characters I’ve created over the years.” 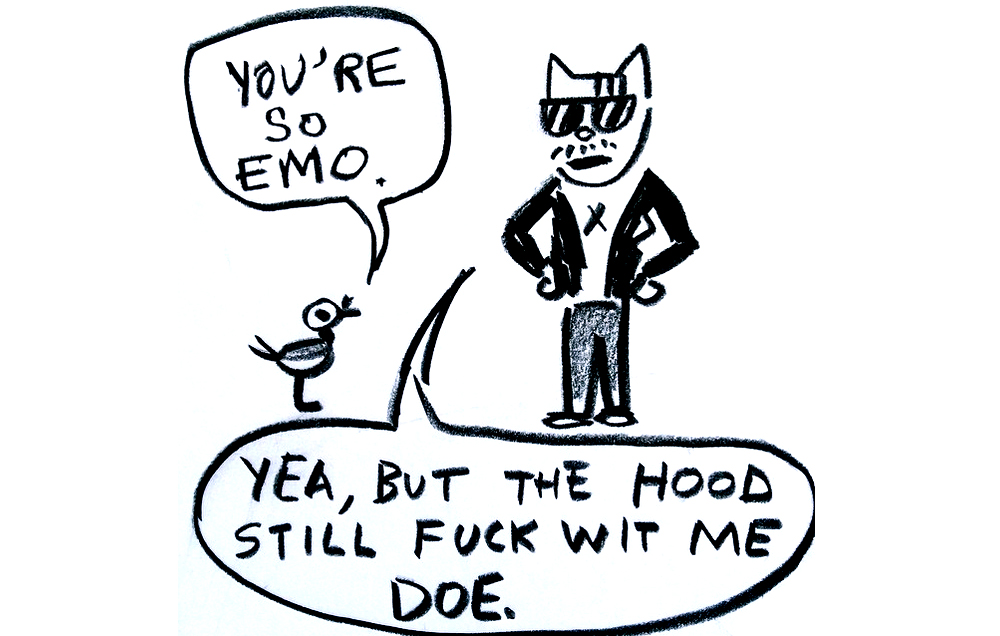 After graduating from the Art Institute of Philadelphia with a focus on 2D animation, Miller moved to Hawaii and started working on cartoons for local papers and surfing companies, such as Volcom. Over the years, he would bounce back and forth between Hawaii and his home state of New Jersey. “I’ve always said New Jersey is like a giant vortex that will keep sucking you back every year.” Despite the desire for a steady gig, he always found himself in a cycle of freelance work. “Freelancing was always a major pain because the money would come one week, and then not show up for who knows how long again. There was a period when I was doing surf lessons full time and animating in my free time.”

Miller’s work is a hybrid of quick wit, topical pop culture themes, and the right amount of melancholy that translates perfectly for today’s internet generation. On an average day, he’ll post about 3 to 5 cartoons on his Instagram. “I’m not obsessed with posting on Instagram,” he says, “I just happen to draw a lot of cartoons.” When one of his cartoons featuring Miley Cyrus ended up on her radar, she reposted the image on her account and he, “got like 5,000 followers in a single day.” It’s not uncommon to see a cartoon of Emo Cat discussing the woes of online dating or one of whatever the hot story of the moment is (just the other week the Drake vs. Meek Mill saga was a re-occurring theme on Miller’s feed).

Despite his newfound online success, Drew Toonz is keeping his eye on the prize. After fifteen years of living between Hawaii and Jersey, working for mostly surfing industry clients, he’s soon making the big move to Los Angeles. “I’m [now] leaning towards getting into the entertainment industry. I would like to create TV shows and movies, and [finally] get in the ring with the big boys.”