In our upcoming The Hundreds Magazine Fall/Winter 2014 issue, our minds were all on the topic of breakfast, so of course we asked Harley Morenstein, better known as the epically bearded Canadian beardo of Epic Meal Time what his “Top 12 Epic Breakfast Special Moves at Breakfast That Are Epic” are. This is epic. THIS. IS. BREAKFAST.

1. Cream Cheese CDs
I’ve loved bagels ever since I changed my name from Harry McDougal. But spreading cream cheese on a bagel is a time-consuming ordeal. Correction: it USED to be.

– Take a block of cream cheese.
– Spread it over a sheet of aluminum foil and freeze that.
– The next morning, find a cup with a bagel-sized diameter – don’t know what a diameter is? LOOK IT UP – and use the top of your cup to cut out a perfect cream cheese disc (CCD).
– Lay your CCD on your bagel.

2. Butter Glue Stick
Butter makes everything better. Just ask that racist lady who got kicked off the Food Network. But butter has a downside: if you want it on your breakfast, first, you’ve got to get out a knife… and not just any knife – the dullest of all knives. Then, you have to lop off a chunk of it and TRY to spread it on your breakfast’s delicate skin.

– Steal a glue stick from your little brother’s backpack.
– Clean out all of the glue – unless you’re into eating glue you fucking weirdo.
– Fill up your empty stick with melted butter.
– Freeze that shit!

Check it out: Now you’ve got a Way Better Butter that won’t mangle your morning meal.

3. Cinnamon Roll Waffles
You love cinnamon rolls, I saw you at the airport eating one the size of your head. And you love waffles... hell, everyone loves waffles. But, what if you want to combine the two? Do you have to go to some fancy college like Harvard or DeVry and get a degree in the cross-hybridization of culinary comestibles? Do you even understand the question??? Don’t worry about it, there’s no school involved. All you have to do is:

– Take a can of cinnamon roll dough.
– Pop it open, and put that shit right on your waffle iron.

4. Breakfast Cupcakes
Ever wish eating breakfast was as easy as eating a cupcake? Of course you do. I like the way you wish.

– Get a cupcake tray from that cupcake place in your neighborhood that just closed down.
– Stuff a slice of thin ham in each cup.
– Shove some bacon and an egg into each ham-stuffed cup.
– BAKE that shit. 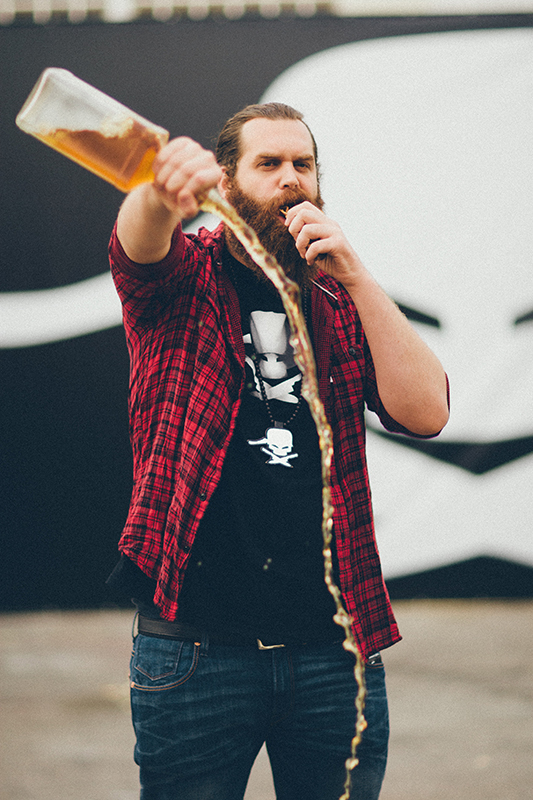 5. Bacon Grease = Bacon Mayo
OK, you’re done with breakfast, now what? Look at all that leftover bacon grease; you’re sitting on a gold mine, son.

– Take that grease and whip it into Bacon Mayo.
– Use your mayo for lunch, for dinner, or to trade for goods and services.

– Wrap the fattest sausage you can find in a bacon pancake.
– Tell it to squeal like a pig (before you violate it in front of its friends).
– Then celebrate by rolling around in your own filth.

7. Cookies in a Bowl with Milk
Cereal just doesn’t cut it.

– Take a box of your favorite cookies – Chocolate chip or Oreo.
– Throw that in a bowl with some milk.
– Eat it with a big ass spoon.

– Take a standard breakfast of eggs, bacon, and toast.
– Put your eggs and bacon on the toast.
– Just roll that into a ball very crudely.

11. Liquid Breakfast
What’s that? You like bacon? You also like pancakes? Well here’s a suggestion: don’t bother eating that for breakfast, instead, drink it. We are fortunate to live in a time of bacon whiskey and pancake vodka. Now you can eat breakfast and get drunk. You just doubled productivity.

– Take an egg McMuffin (the one with the pink Canadian bacon meat disc in the middle).
– Take a maple glazed bacon doughnut (preferable from Tim Horton’s).
– Fist that doughnut into the middle of your egg muffin.