Heaven takes a photographic journey inside the life and mind of one of skateboarding’s most infamous characters.

It’s a story of a skateboarder gone mad, religious fanaticism turned villainous and a once-promising career ending in incarceration. The rise and fall of infamous pro skateboarder Lennie Kirk has become the stuff of legends within the skateboarding community, and for the first time ever, his story is being revealed through the lens of photographer Dennis McGrath in his soon-to-be-released book entitled Heaven. Through a range of unseen images and other artifacts from Kirk’s life and legacy, Heaven chronicles the tale of the gifted North Carolina runaway’s tragic descent from the top of pro skateboarding’s ranks into the dark realms of Christian fundamentalism, crime and prison—where he now resides for a range of criminal offenses ending in a mandatory three strikes sentencing.

Dennis was nice enough to invite us over to his Los Angeles home to have a look at some of the makings of the book and some revealing conversation about why he chose to uncover the story of the enigmatic Lennie Kirk. 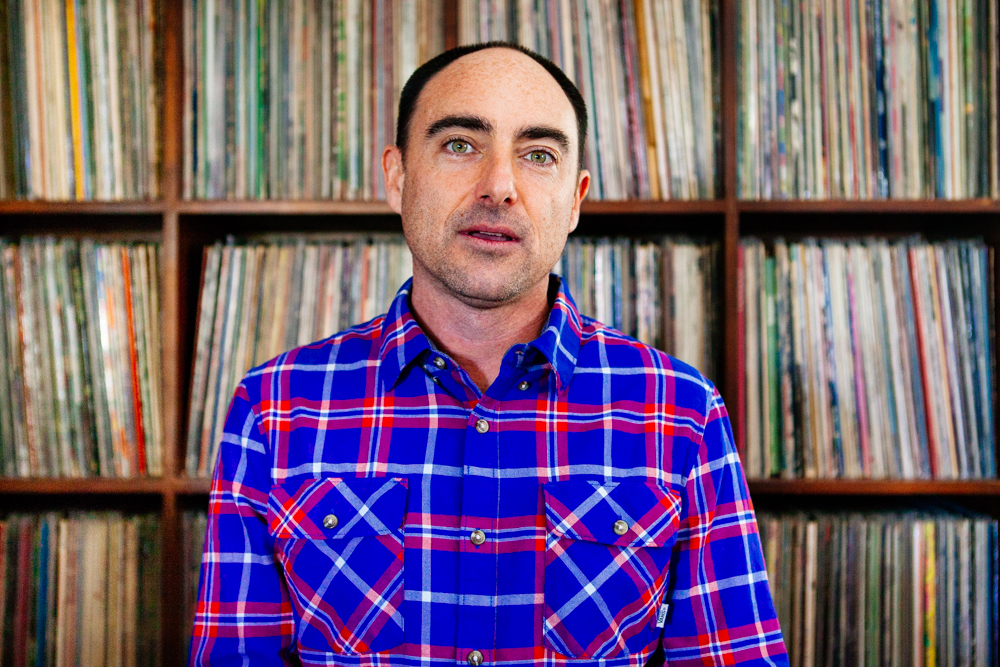 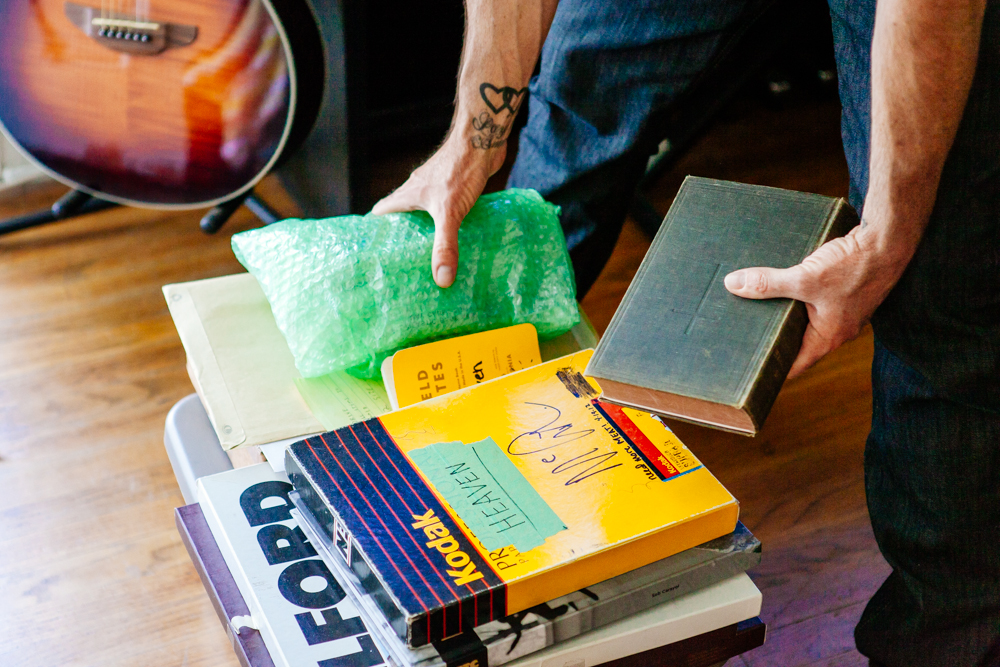 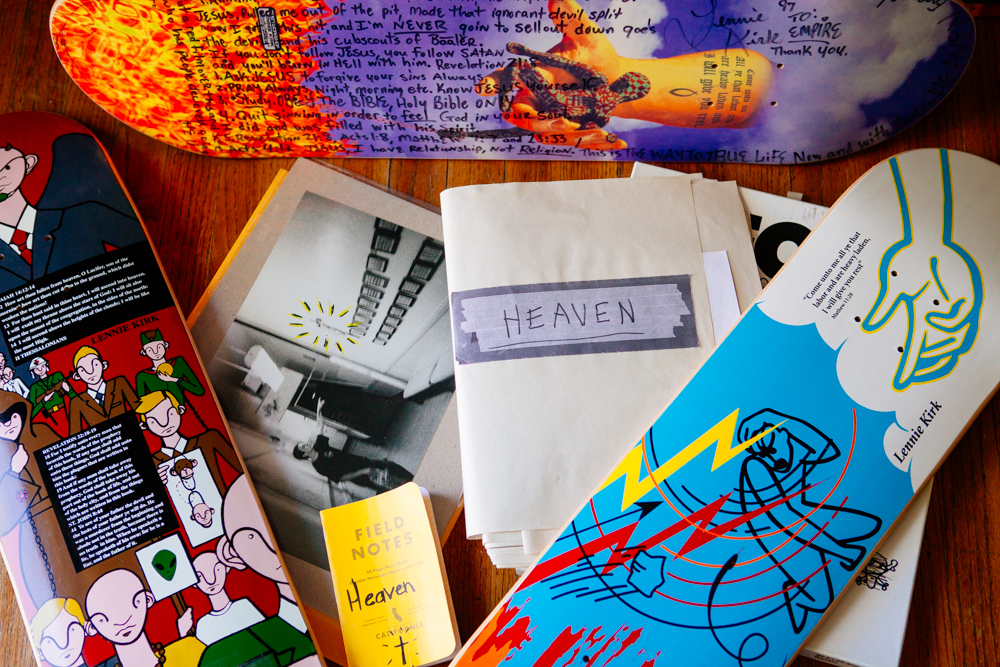 CULLEN POYTHRESS: You’ve mentioned that Heaven is book that’s more about life than it is about skateboarding. What do you mean by that?
DENNIS MCGRATH: Well, the fact that Lennie is a skateboarder is just a part of it really. It’s significant that he was a pro skateboarder in many ways, but this book is more about the human condition. Life’s not easy and it’s even harder for some of us. There’s a lot more to the story than the fact that he skates, but there’s a bunch of skate stuff in the book. The book is really about the struggle.

What was your relationship with Lennie as a skate photographer during the nineties in San Francisco?
I first met Lennie years before I shot skate photos, but we shot a bunch of skate stuff back in mid to late ’90s. The best thing we shot was probably his backside 50-50 on the kinked ledge on Castro Street in San Francisco. We got three photos that day. He did a switch frontside lip slide on Hubba as well.This was when he was pretty newly “saved” and would use the “Power of the Lord” between tries. It was pretty intense. When he grinded that ledge I had never seen anyone grind anything like it before and a bit unsure if he could grind through the kink—it was super gnarly. This was 1996, I think. The first time he grinded through the kink I screamed. It was fuckin’ insane. He looked me in the eyes and said, “Don’t doubt me, Dennis!” and started praying super hard and then the next try he made it. I pitched it as a cover to Transworld, but it didn’t run. It ended up being a full page in the mag though. It’s kind of a shame he never got a cover.

Late nineties skateboard lore is full of stories of Lennie praying at spots and claiming to have been saved by god like you’re describing. Where do you stand with that? Is religion dangerous? Is this even about religion? Is it more about mental illness? Mania? Fanaticism?
You could say Lennie was fanatical at times. He always talked about how he had to concentrate on Jesus. I think it was because he had tendencies to do bad things like steal or whatever and that would keep him in line. It was good for him at first, but then he seemed to get distracted by it as far as his skate career. I think faith can be a good thing as long as people don’t take it too far. He kind of went off the deep end with it. He was constantly preaching and trying to save everyone all the time. Things got sketchy with his skate career when he started telling kids at demos they were going to hell if they didn’t repent. There was an Alien Workshop tour where shops were canceling orders after demos instead of placing orders—maybe it was just orders of Lennie’s board. I forgot exactly, but parents were pissed because he was telling their kids they were sinners and going to hell and all this crazy stuff. It’s pretty amazing really. He was so passionate about everything he did but Christianity took over and his skating fell off. Another thing that was pretty incredible around this time is that he learned to speak Spanish in just a few weeks. One day he came over to my house with a Spanish Bible and was preaching in Spanish. Lennie wasn’t the smartest kid. He left home when he was fourteen so he didn’t really have an education. When I asked him how he learned Spanish he said, “The lord gave me the language, Dennis!” 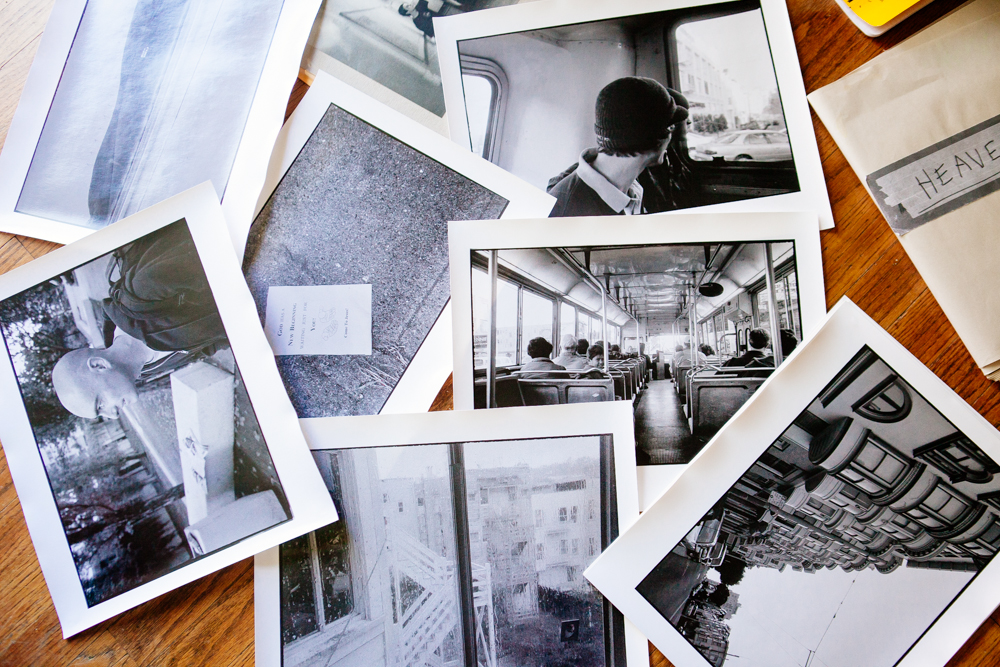 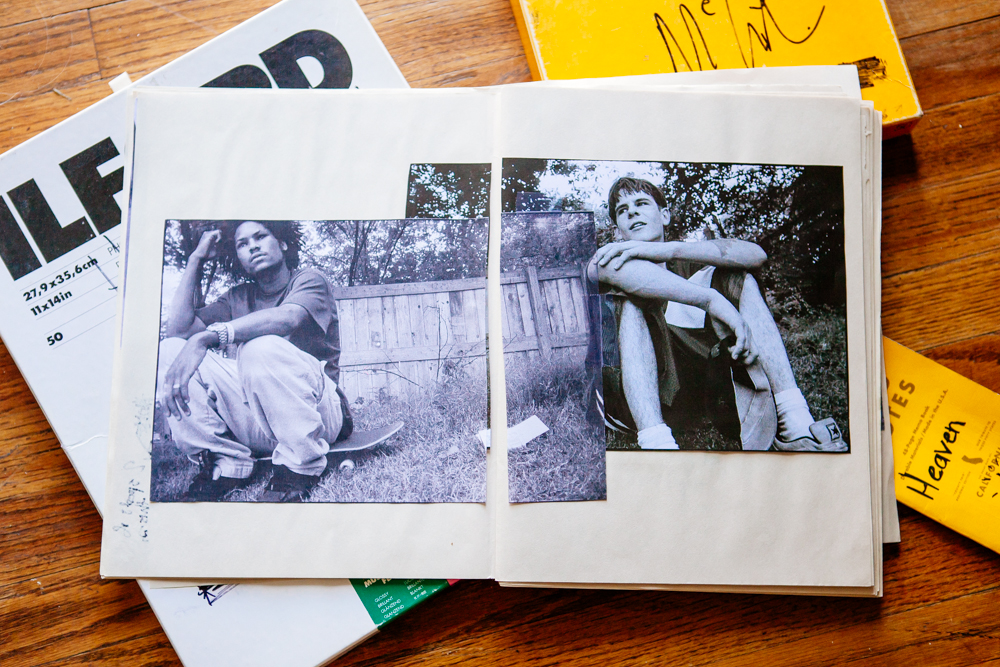 Sometimes, it seems, that infamous characters in life are sometimes misunderstood. Is that the case with Lennie? Is there anything about him or his life that’s maybe exaggerated or blown out of scope?
Yeah, to a certain extent, maybe. But most of the stories about Lennie are true.

Given your standing relationship with him, what do you think went wrong? Was there a definitive moment where he changed? Was there anything about his life, upbringing, or childhood that could have caused his religious obsession?
He comes from a pretty traditional Southern family from North Carolina who was Christian and so that’s where that comes from. He obviously rebelled once he got into hip-hop and left home to skate. Lennie was always a pretty crazy kid—getting into trouble and partying. It’s similar to his skate style which is go for broke. He always had an intense personality, but when he hit his head on the dumpster slam in the Alien Workshop video, Timecode, that’s when he changed. That can happen when you have a serious head injury. It makes sense. But then a week or so later he got ran over by a Pac-Bell van while skating downtown and not a scratch. He walked away from that. Then he was “saved”—maybe God did save him.

What would you say his legacy is on skateboarding? He was so influential and progressive at the time, right?
Yeah, Lennie was definitely ahead of his time doing certain switch stuff and what not, but more than anything I think his approach is what was so rad and had the most impact—the type of spots he was skating, his choice of tricks and even some of the bigger boards he was riding at times. Also his style was kind of reckless. His arms were flailing and even his feet could be everywhere. Watch his switch backside 180 nosegrind on Hubba in Timecode. His front foot (or back) is straight parallel with his board while he is grinding then he lands bolts. His skating was amazing to watch. 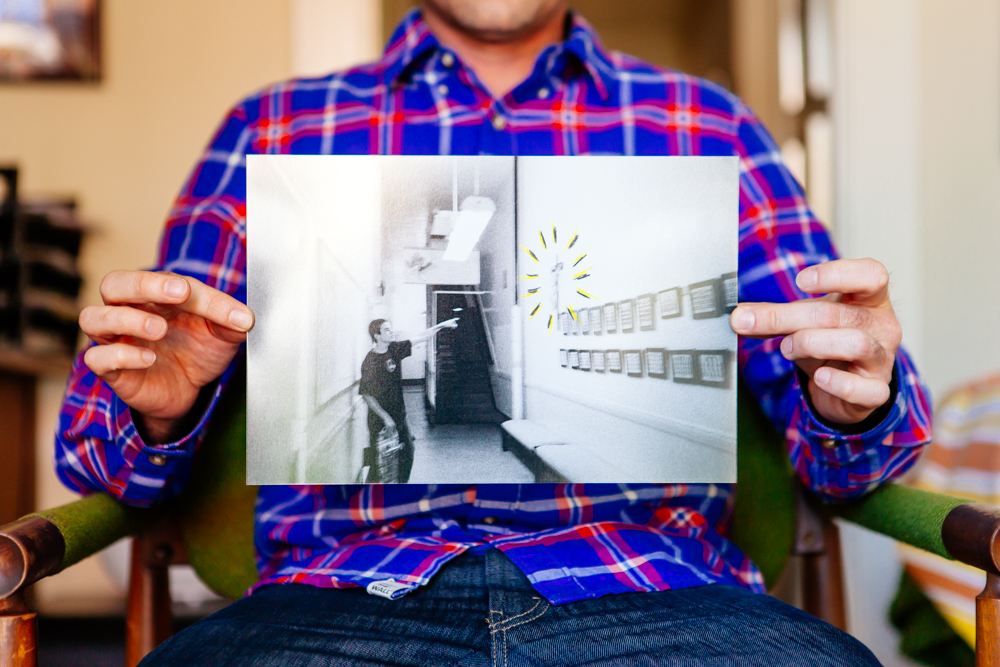 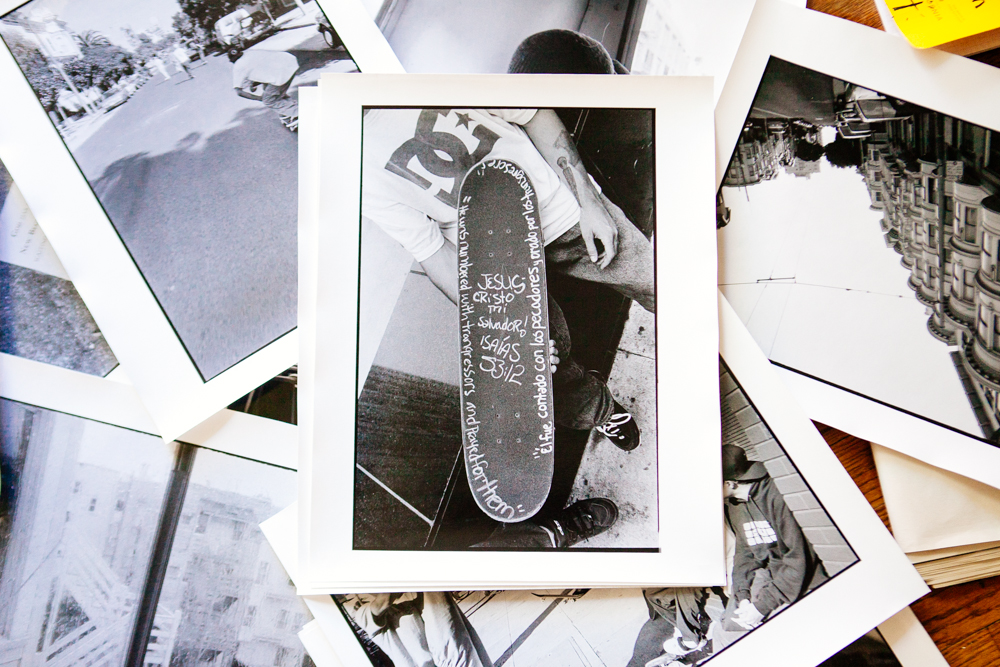 Let’s talk a little bit about the making of the book itself. Describe the process of chasing down photos and interviews for inspiration for the book?
It’s a photo book. I look at it as experimental storytelling—photos and ephemera which loosely tell a story. There’s no context or introduction. If you look at the photos and read all the text and ephemera it guides the story. The texts are excerpts from interviews and things he wrote and left at my old house. His Mom sent me a bunch of childhood photos which are really amazing, some things Mike Hill sent me from Alien Workshop and others are letters from Jail. I’ve been slowly working on this for years so I’ve acquired all this stuff throughout the past few years.

What are some of the artifacts for the book you dug up?
I’ve got some of his pro models and I’ve got a box of hi-8 tapes most of which are from Timecode part with notes in each of them. And then there’s graphic ideas. One of the things I find interesting is that Lennie had ideas for most, if not all, of his Pro boards. Who does that? Especially these days? He had a vision which I find interesting. Then there’s letters he wrote me from prison—mostly Christian rants.

Have you spoken with Lennie about the book? Do you have much contact with him inside prison?
Yes, we have talked about it a bunch. I’m going to get him some money now that DC is on board with the book project. DC and I are doing a limited run of shoes and t-shirts for Spring 2015 and I am sharing whatever profit I get with him. We write and I sent in some paperwork so I can go visit him, but I’m still waiting to hear back. He’s in Arizona due to overcrowding in California prisons which is a good thing for him as his sentence will most likely be shortened because of it since he’s in for non-violent offense. He has Three Strikes so that’s why he got hard time. It’s also known as a Habitual Offender Law. It looks like he won’t be getting out for another five or six years most likely. 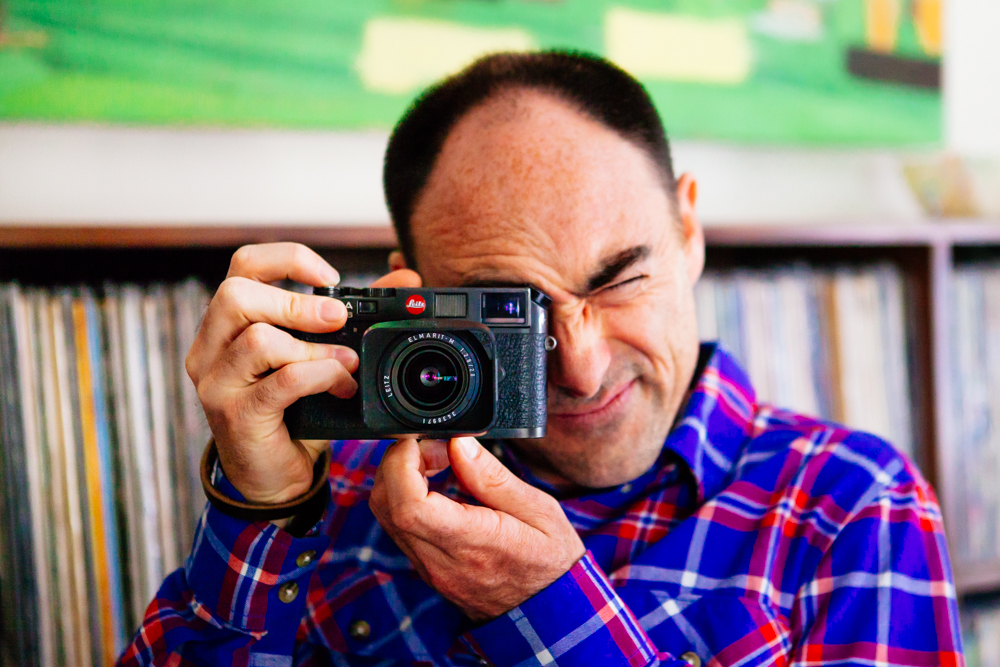 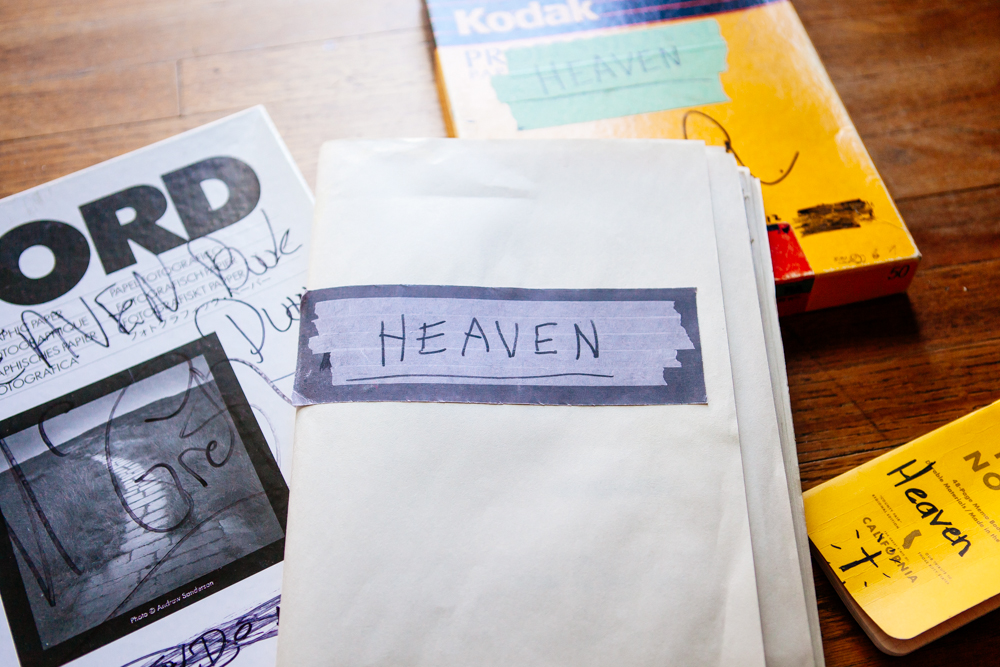 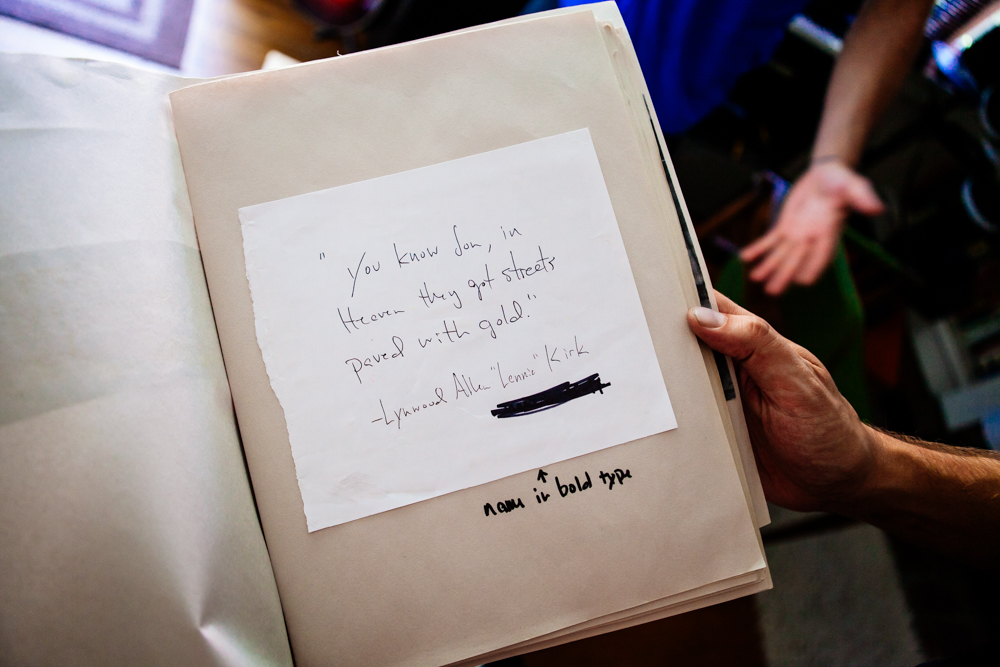 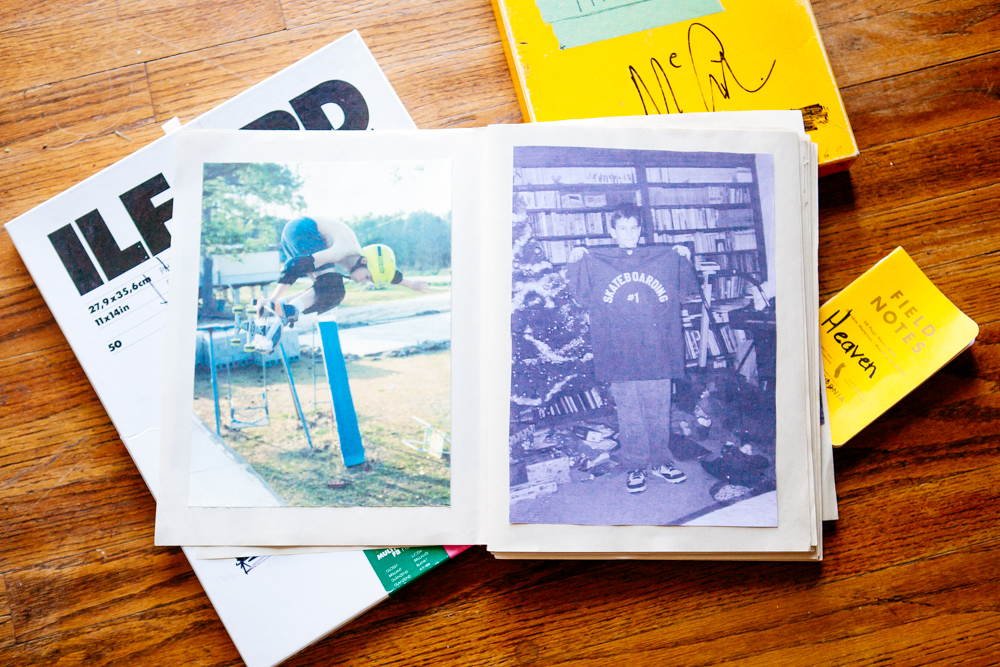 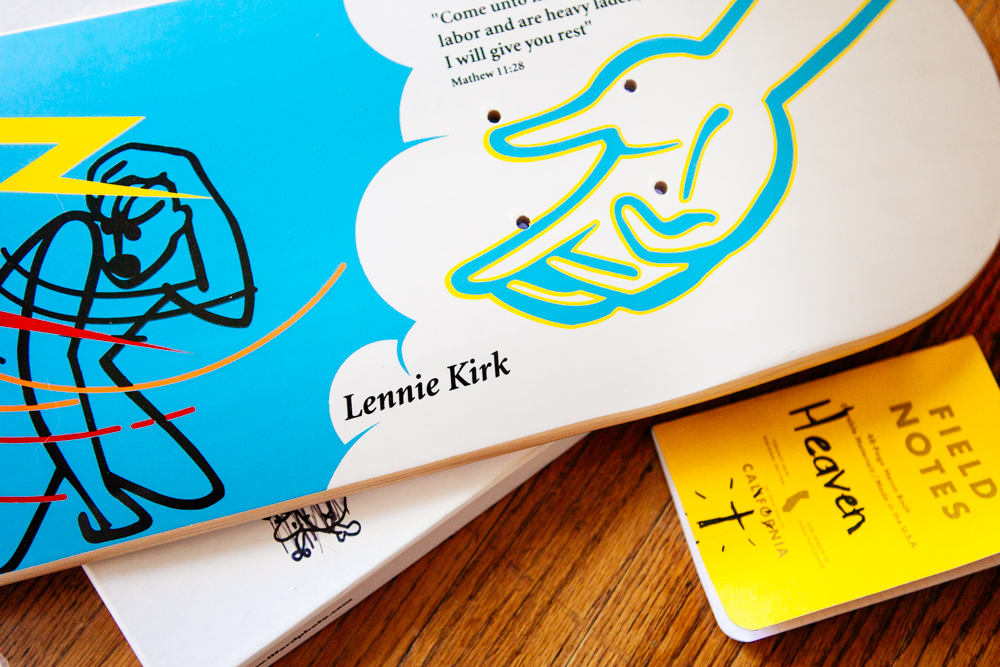