I never thought that I would knuckle-utter these digi-letters, but I’m impressed by a company that makes toothpicks. And, that’s probably because said high-end toothpick purveyor is being tenaciously thrust onward with an impressive captain at the helm, Peter Smith, a former finance executive who quit a lucrative job in London to pursue his dreams of making something tangible.

From a padded life in Europe, to his parents’ basement in Ontario, Peter did what he had to do to make a statement with Daneson, executed with painstaking attention to detail, quality of ingredients, and strategic distribution. Stocked in 200 accounts worldwide, having first taken its stride into retail with the likes of colette, Daneson is as carefully developed as its founder is passionate about his creations.

I had the recent opportunity to catch up with Peter Smith to shed a little light on what goes in to developing a Daneson.

“I find this bores people, but for someone like you, you’ll probably find this interesting. There’s this professor at Duke University, this professor of Engineering, who wrote a tome on toothpicks. It’s like a 400-page book. He goes through the whole history, and there’s this long history of humans using toothpicks; it’s literally one of the first tools. It pre-dates the wheel, it pre-dates fire.

What’s also really cool is that the toothpick was among the first commercial, mass-marketed, mass-produced products in US history. Back in 1870, this guy named Forster, who was making wooden pegs for shoes, found a way of making quality toothpicks in mass quantities, and his whole marketing strategy was to give them out to restaurants, and he then paid Harvard students to go to these restaurants, order food, and then ask for his toothpicks at the end of the meal.

It was sort-of the first Harvard business case study kind of thing. And, I don’t know how much of this is legend or what, but that spiraled into toothpicks becoming this status symbol. You have to understand, this was a time when people didn’t really eat out very often. This was a time when people couldn’t afford to eat meat very often. So, toothpicks became a status symbol. They’d say, ‘I’m a dandy, I’m a guy out on the town. I can afford to eat out.’ It was a way of symbolizing to the rest of the world that you could afford a nice meal.”

“What the hell is a dandy,” I pondered inquisitively. Here’s what Google replied:

“A man unduly devoted to style, neatness, and fashion in dress and appearance.” In other words, crispy™. 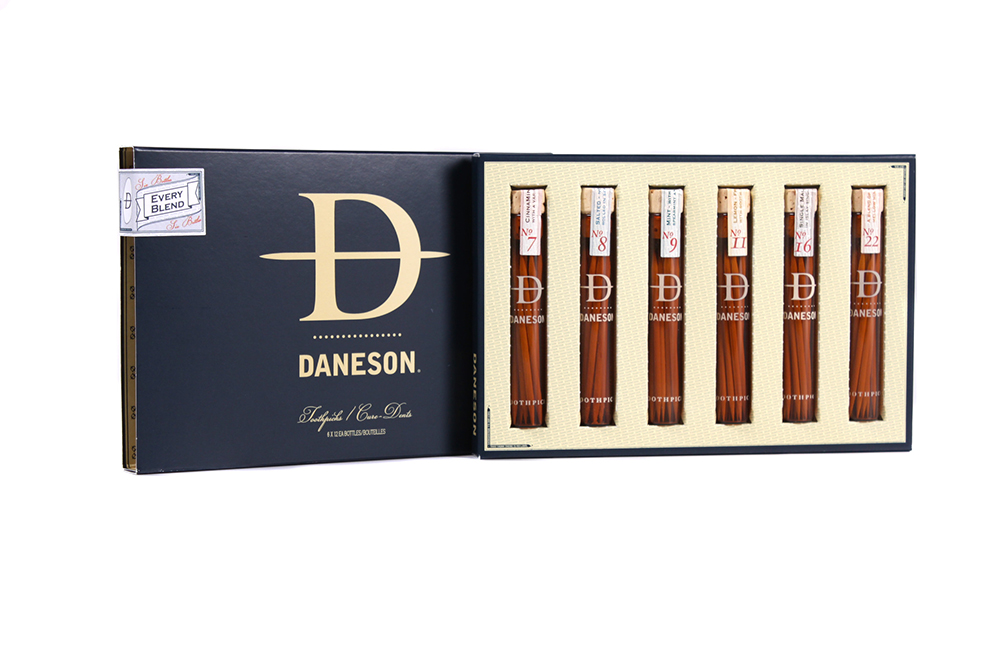 On piquing his interest.

“I lived in the UK for ten years, I was living in London and elsewhere in Europe, working in finance, and man, I was just not happy. I wasn’t happy with what I was doing in life. I was one of those guys who was often in boardrooms talking about deals and efficiencies, classic corporate BS.

I really wanted to start my own business. And, since I had not hit my stride in finance around until 2007, right at the beginning of the crash, I never had a massive payday. So, I didn’t have a ton of money, but I knew I wanted to make something, and I wanted it to be something physical. And, one day, I had this brain-wave.”

The same day that Peter accepted a new job opportunity in London that was too good to pass up, and coincidentally the first day of the financial crisis, this van drove by. And, if you’re a supplier, like a butcher, in the UK, and you supply to the crown, you get to put their royal warrant on your packaging and delivery vehicle to say, “I’m the best butcher in town. I provide the Prince of Wales with his meat.”

And, after remembering his grandmother’s affinity for toothpicks, and sharing a few premium Japanese toothpicks with some friends on a prior night out, his passion surfaced. The delivery van drives by, he has the royal warrant, and the lightbulb goes off.

“I started digging in in 2008, and it took 3 years to assemble everything and figure out, Can this be done?

So, I held a job from 2008 through to 2011. And, the entire time I was working in finance, I was working on toothpicks on the side. In 2011, I quit on good terms, incorporated Daneson, and started going. And, that’s why, if you look at our website, it says we founded in 2011. Because that’s when I sort-of dropped everything, spread clear the desk, and said, ‘OK, let’s make these things, let’s figure this out.'” 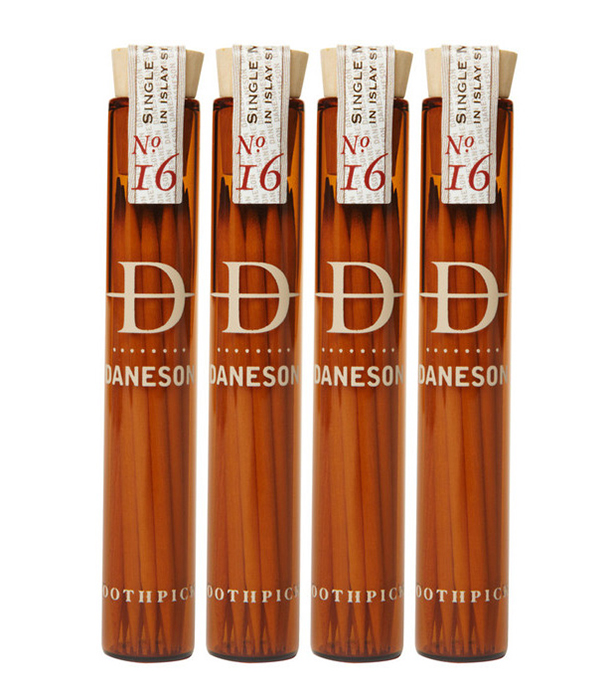 On the challenges of making a real product.

“Here’s the deal. Of all the other toothpicks out there, unless it’s tea tree or menthol,both of which are very medicinal tasting, if it’s anything else, it’s very likely an artificial flavor, and we don’t do that.

Instead, Daneson toils on finding real ingredients like essential oils from Iran, Kentucky bourbon, and Islay whiskey, infused for a slightly startling, but refreshing uncorking, when you realize that it’s hardly a toothpick at all.

“The hardest part is the flavoring – the recipes. We’ve made a recipe, bottled sticks up, and then honestly, two months later, we have to throw them away because the flavoring dissipates into nothing.

And, I’ve cold-called university professors to ask if they knew anyone with the knowledge to do this. It’s one of these things where you talk to someone whose a flavoring scientist or expert, and they’re like, ‘Oh, it’s no problem, we’ll get it done in a week,’ and months later they call saying, ‘No, we can’t figure it out.’

Long story short, since it’s all natural ingredients, it takes a long time and a lot of work to nail down one of our recipes.”

And they are not cheap ingredients.

“Insanely expensive. An ingredient like cinnamon oil can be on-par with a very fine spirit in terms of cost, people don’t get it. There is a huge expense to using natural ingredients. And your average Joe who has grown up on artificial flavors will think – whatever. It’s like liquid gold.

I’ve got thousands of dollars of vials of essential oils. Probably about ten grand worth of samples.”

People aren’t used to spending $36 on a case of toothpicks.

“People think I’m making an insane amount of money everytime they buy something from us. My answer is no. Or put it this way – I live in my parents’ basement. It’s the cost of doing business the way you want to do business. If I made the product in Asia, I might be living in an apartment right now.” 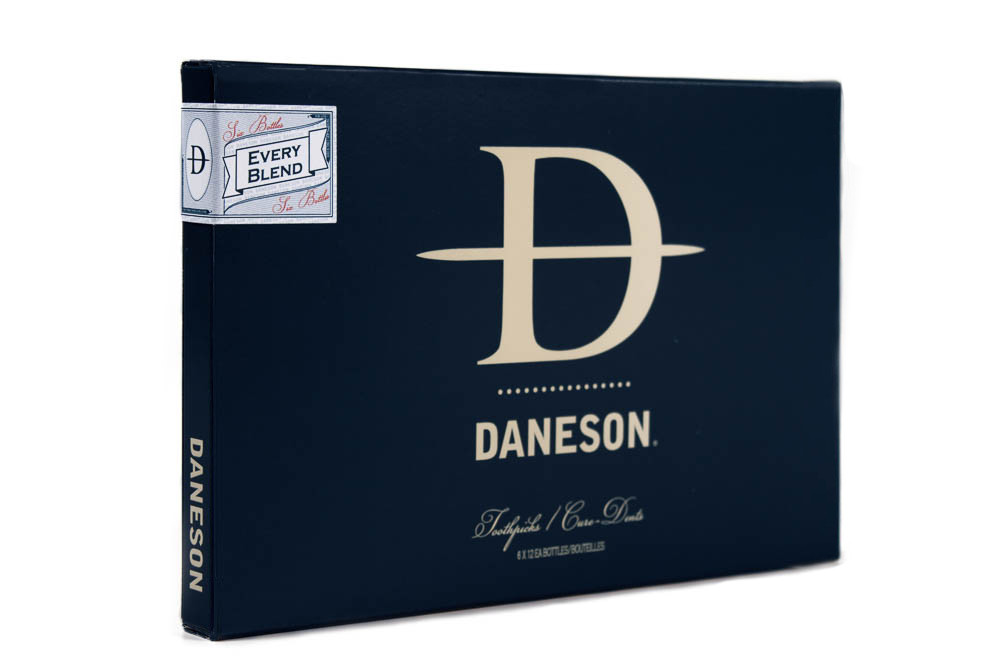 And, despite high operating costs, Daneson has a quiet program that replants forests in an effort to ensure total sustainability.

“We’re a business that tries really hard to make a difference and do things the right way. A principled way. We allocate 1% of revenue to replanting trees, not because it’s a cool marketing story, but because that’s what you do when you make things from wood. It’s not rocket science. The only difference is we aim to plant more than we use.”

“What I miss the most about living in the UK and Europe – meals. Meals were this thing that you experienced. People would not look at their phones. Often, a Sunday lunch would kick off at noon, and it wouldn’t be unusual for it to end at eleven at night. The entire time, you’d be sitting around a table eating amazing food, drinking great wine, and just hanging out.

Nobody would be talking about remodeling their kitchen, or how they have to pick up their dry cleaning, or their kids. It was just people in the moment having fun. That was the kind of experience I envisioned when I started Daneson. It’s the experience, not really what you order, but the conversation and who you have it with.”

The result of Peter’s vision, a meticulously crafted product, symptomatic of a strong desire to do things the hard way. Eventually, Peter strives to see Daneson as a product that is identified separately from the standard toothpick, a Daneson, offered at restaurants and premium retailers around the world.

You can get your Daneson toothpicks here. Photos by Si Hoang.

UNDER THE PIN :: GETTING TO KNOW ACCESSORIES BRAND #PINTRILL#