Inherent Vice is P.T. Anderson’s 7th film, and an adaptation of the apparently unadaptable novel by Pynchon, the unadaptable novelist. The film is rambling LA investigative confusion adrift in a lot of weed smoke and ’70s-era meaninglessness – and it’s really, really good. And funny. Starring Joaquin Phoenix as “Doc” Sportello, Katherine Waterston beautifully as Shasta, Josh Brolin as Detective “Bigfoot” with possibly the best flat top I’ve seen in years, Owen Wilson as… you’ll see, Martin Short as a cokehead dentist, along with a slew of other ace actors. Shall I continue? Jena Malone’s teeth in this film are unstoppable, Maya Rudolph plays the best receptionist ever, Hong Chau kills it for every aZn girl out there as fast-talking Jade, Joanna Newsom’s voice plays Joanna Newsom’s distracting voice, and Joanna Newsom herself plays the psychic Sortilège.

I asked about people at the show if they’d seen Inherent Vice and 5 out of 10 said they hadn’t. At first, I was drunkenly appalled, and even yelled back, “ARE YOU SERIOUS,” and, “YOU’LL LIKE THIS STUFF SO MUCH MORE ONCE YOU’VE SEEN IT,” (even Ace Hotel implored attendees to watch the film as a fun assignment). All this until I was reminded that the wide release isn’t until this Friday, the 9th, and felt dumb. So if you haven’t seen it, you have to go see it. And while you’re at it, if you love films about LA, watch the mandatory Thom Andersen’s Los Angeles Plays Itself – which is currently on Netflix, Polanski’s Chinatown hopefully for the fifth time, and Robert Altman’s The Long Goodbye, based on Raymond Chandler’s hard-boiled detective novel of the same name. If Elliott Gould’s Philip Marlowe is the ideal LA alcoholic detective in The Long Goodbye, then Joaquin Phoenix’s Doc is the ideal LA stoner detective.

Apparently anyone who booked a room during the show was to receive a limited edition vinyl copy of highlights from the Inherent Vice Soundtrack by Jonny Greenwood (NONESUCH Records). The LA show runs until this Sunday, 1/11 and is free to the public, so do catch it if you’re in LA. 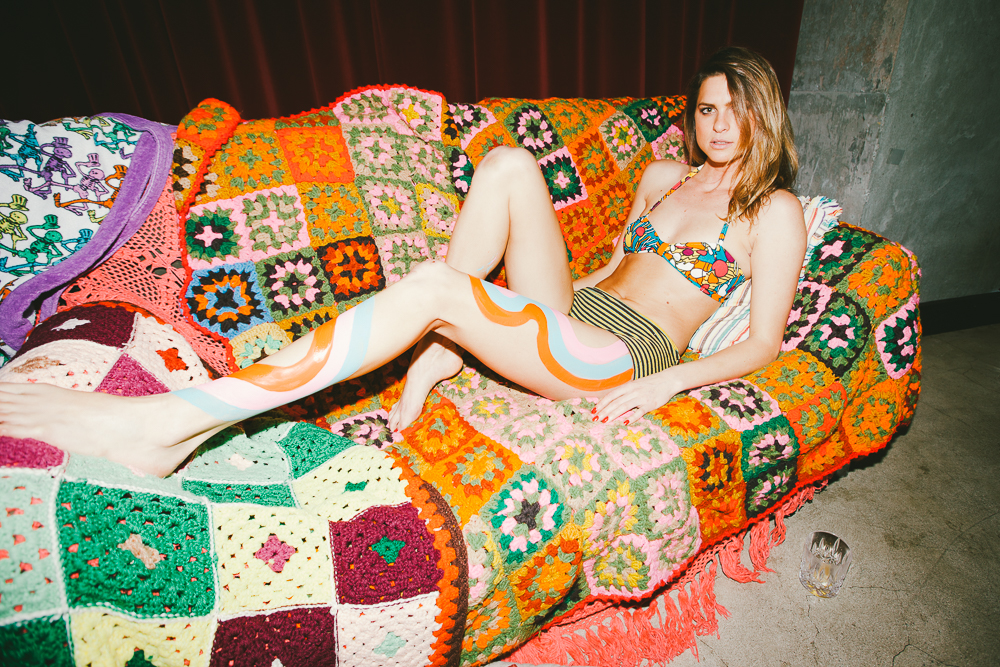 Topanga Canyon Pop Artist Alia Penner below painting a Shasta-lookalike on a couch reminiscent of the one from the film. There’s a particularly long take in Inherent Vice on that couch where a joint stops burning. If you’re like me, you’ll be transfixed on that NON-BURNING joint during this scene instead of the nudity. 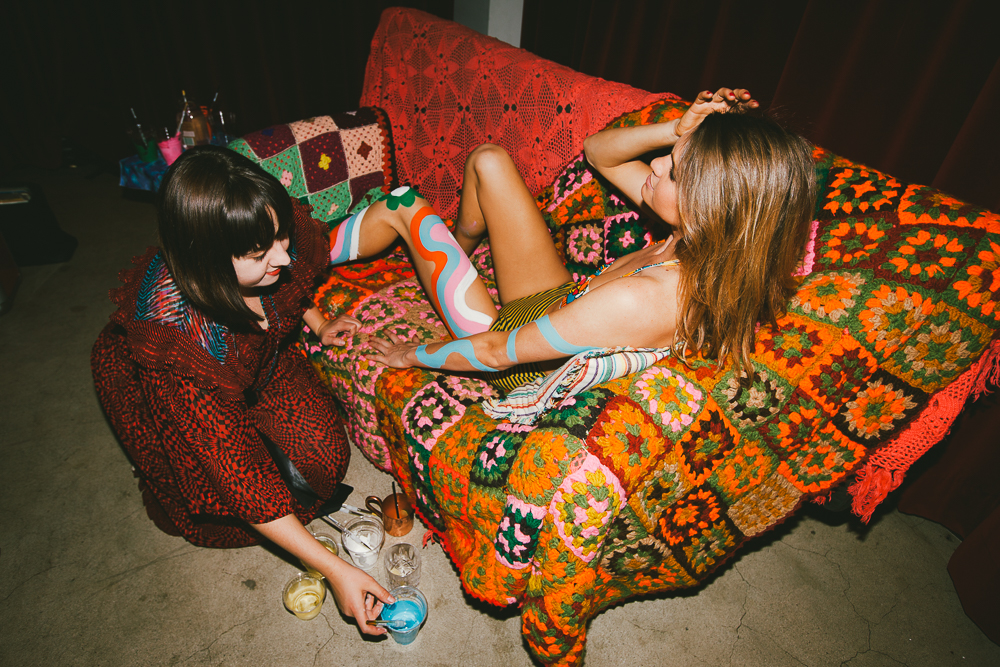 Travis Millard‘s 6 panel ink on paper drawings, inspired by Inherent Vice. I really liked the second panel “Golden Fang HQ, with Dr. Rudy,” which depicts Doc jumping from a platform, saying, “Well, just to be sociable,” and landing in what looks like a hill-size mound of cocaine with Dr. Rudy. 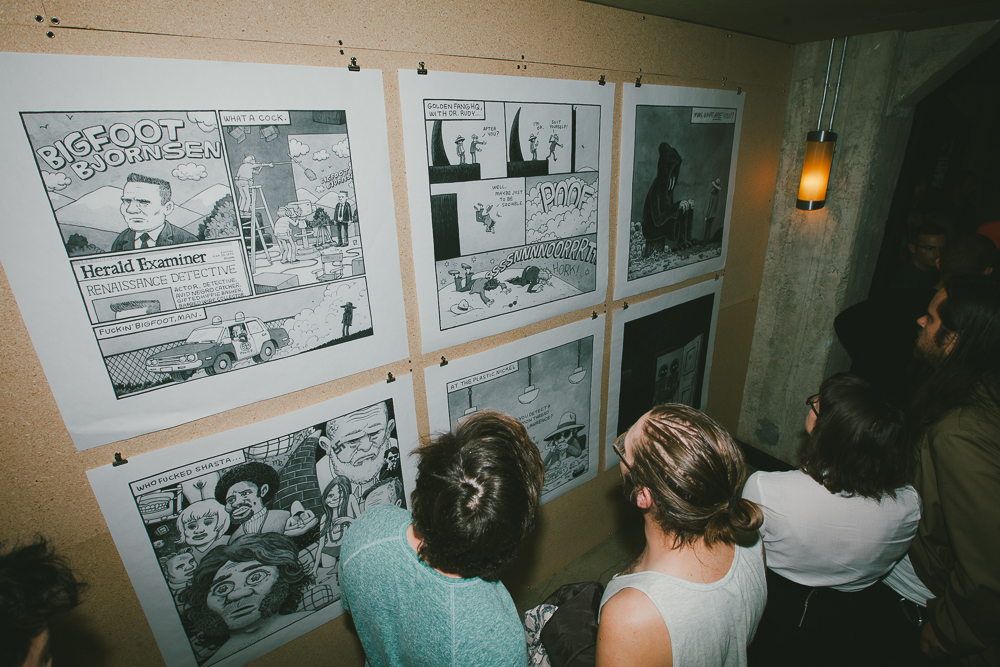 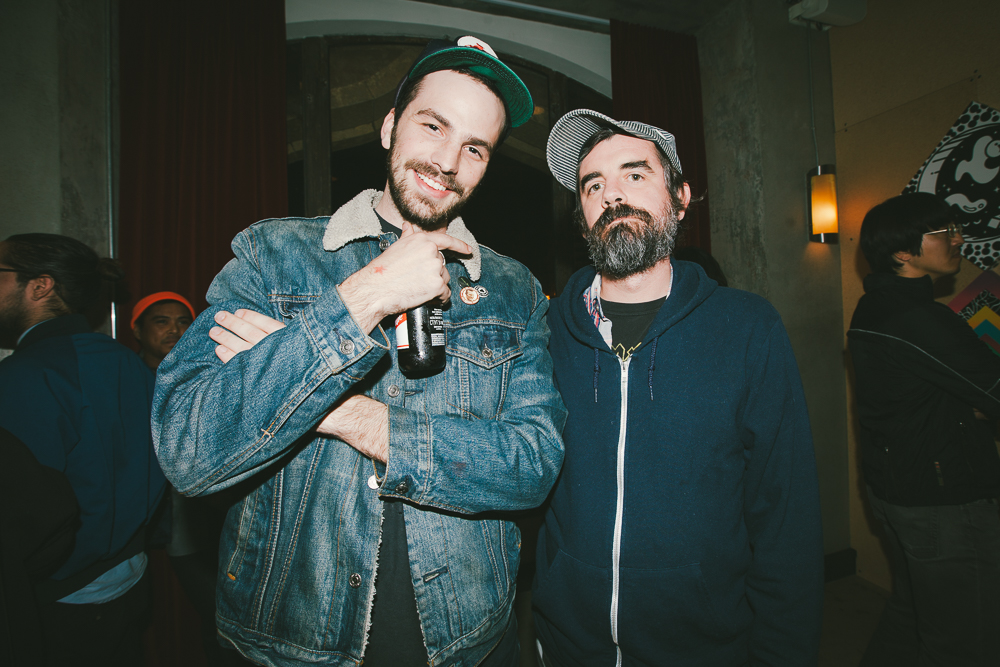 “You & I” by California’s own Steven Harrington. Had me thinking of long run-on sentences interspersed with ampersands – so basically, Inherent Vice. 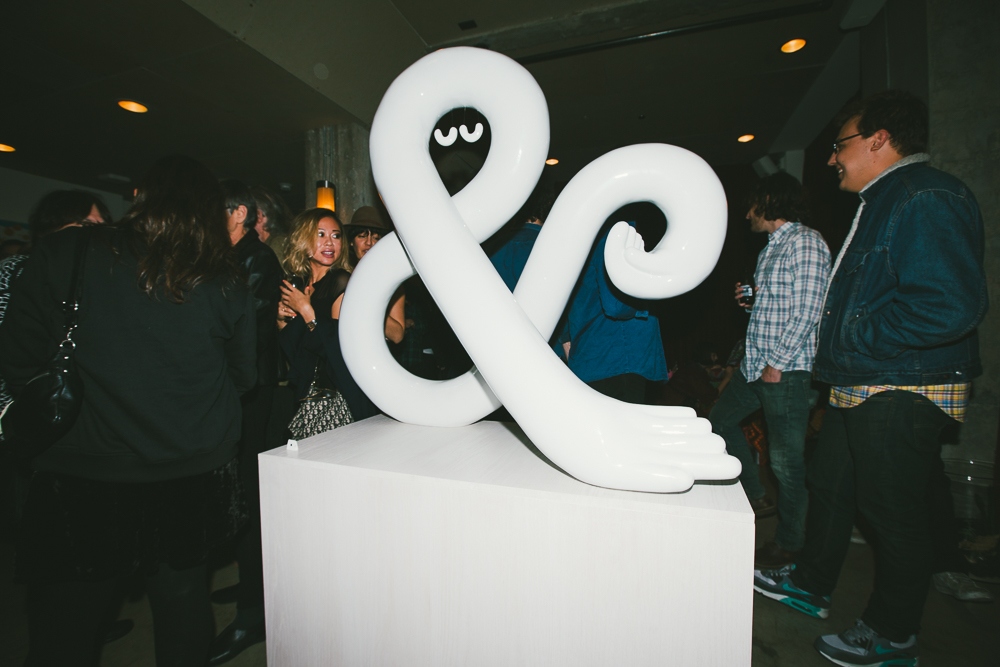 “Chateau” by Travis Millard on what looks like Chateau Marmont note paper. The person pointing is asking, “Is that Rob Heppler?” 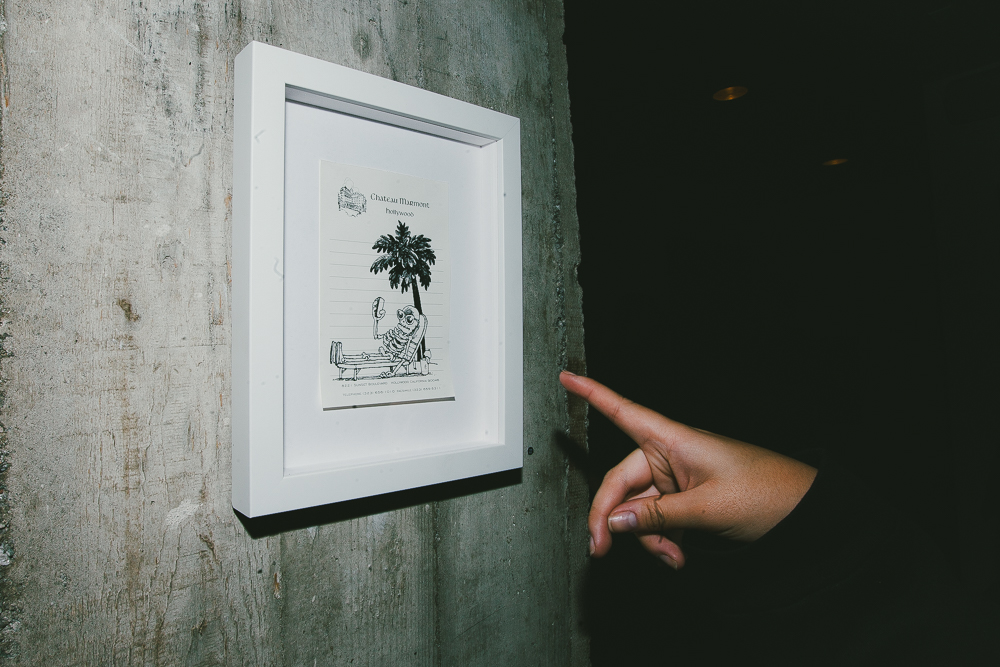 There’s me in the middle looking confused and dirty in a crew neck sweater with feather lint and olive oil stains all over it. The open bar provided wine, House Beer, Budweiser, and Red Stripe. 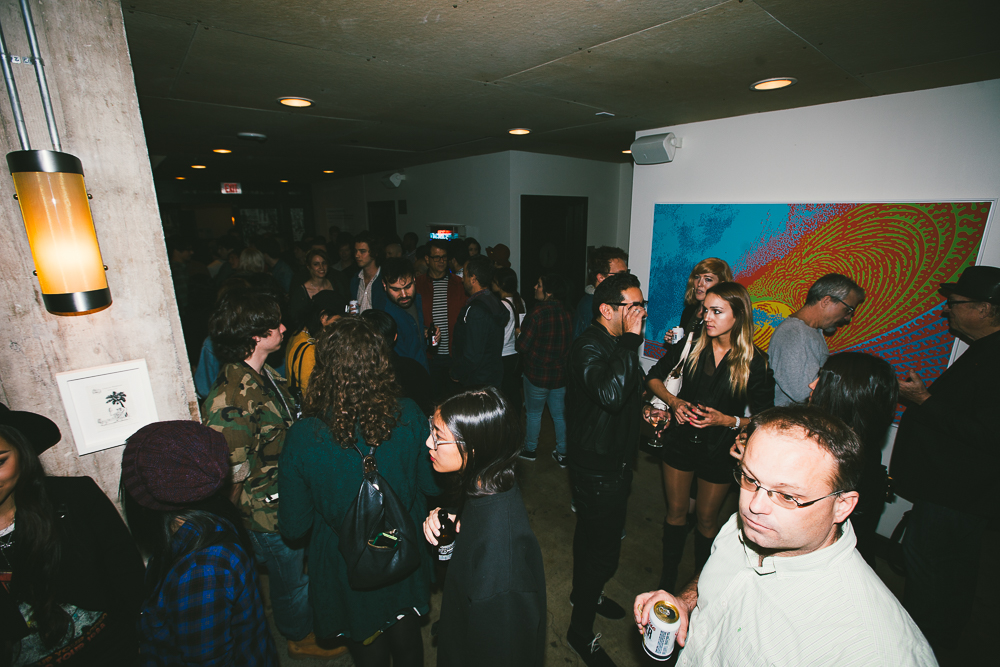 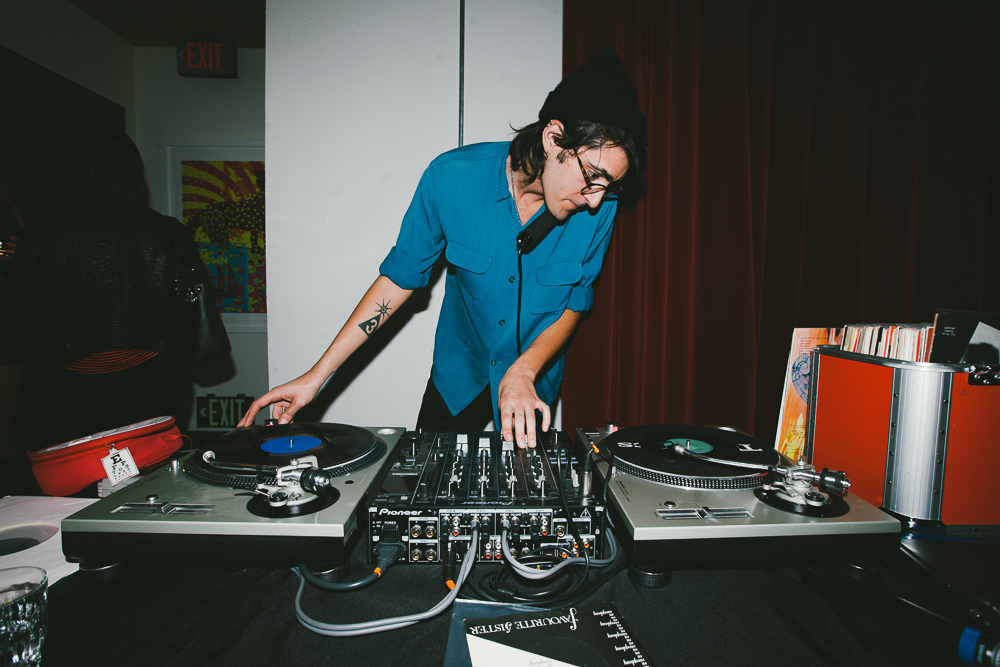 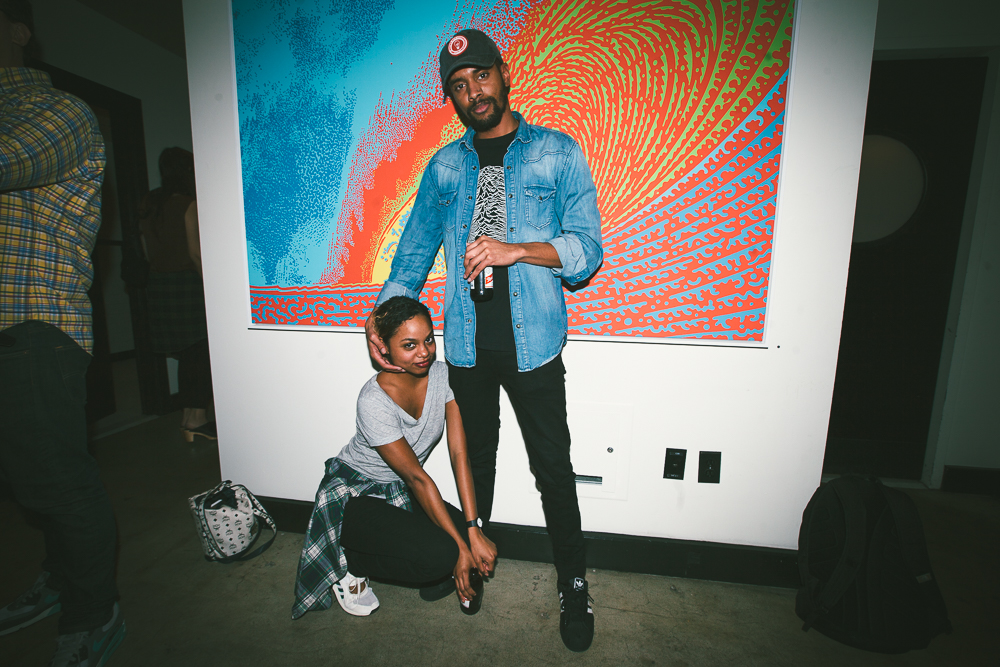 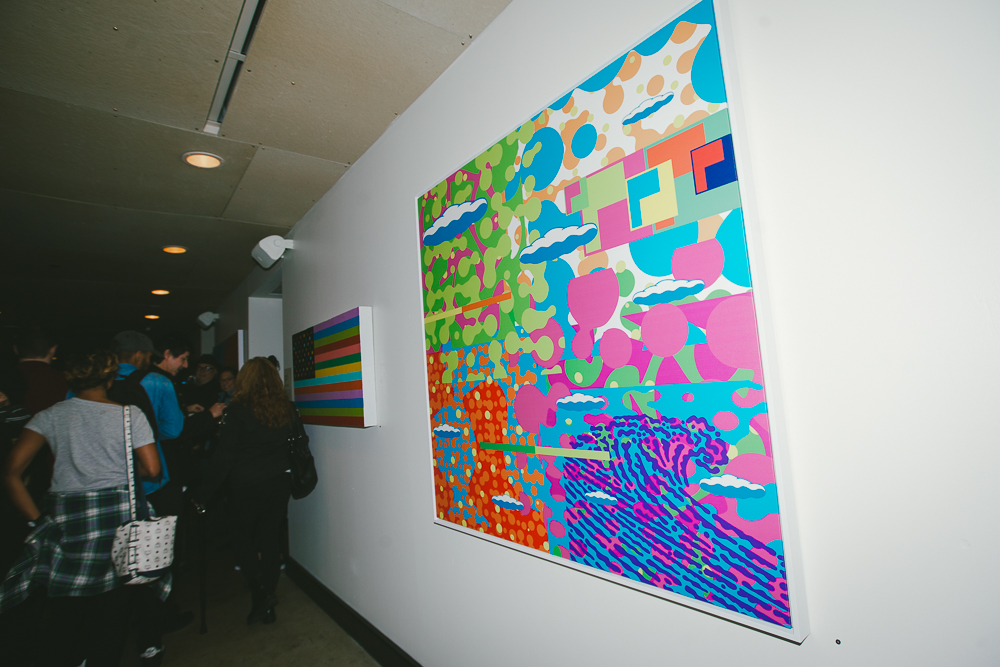 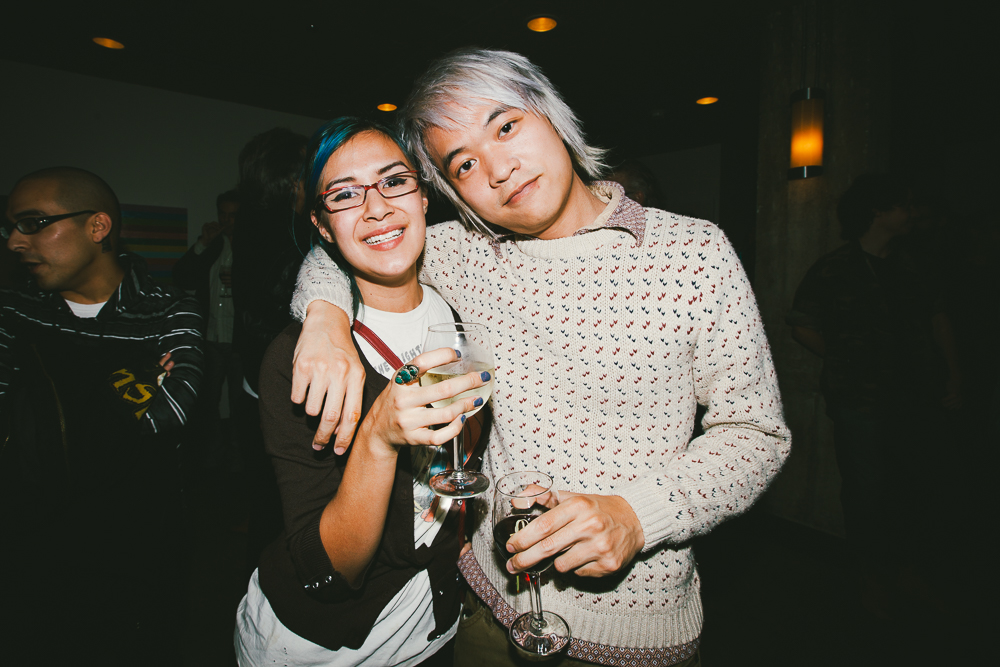 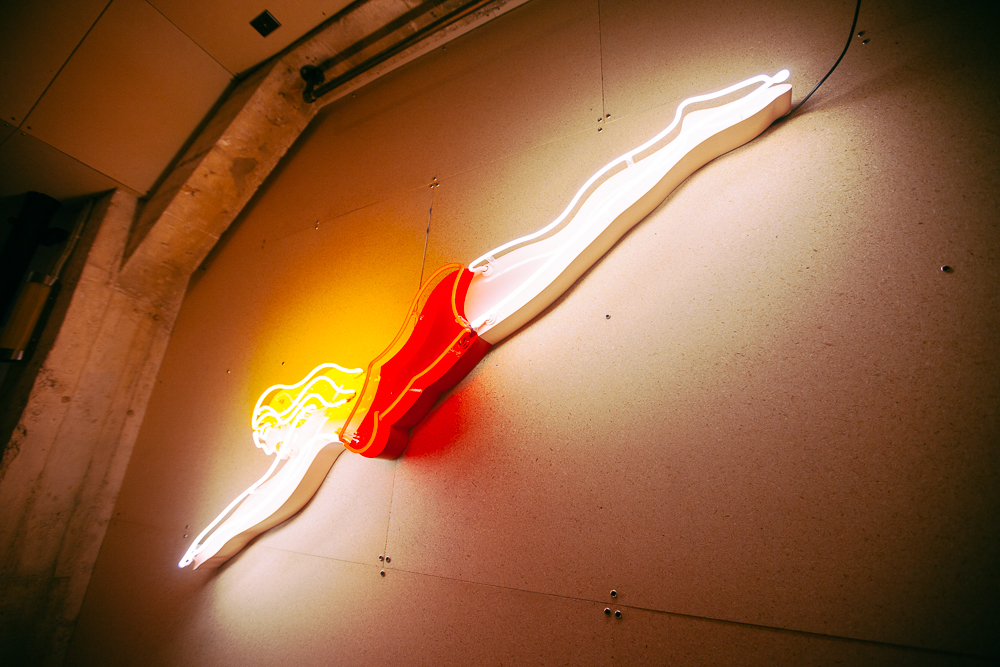 Another Lili Lakich – “Virgin Flaming Heart (Cobalt).” Made me feel some LA feels. 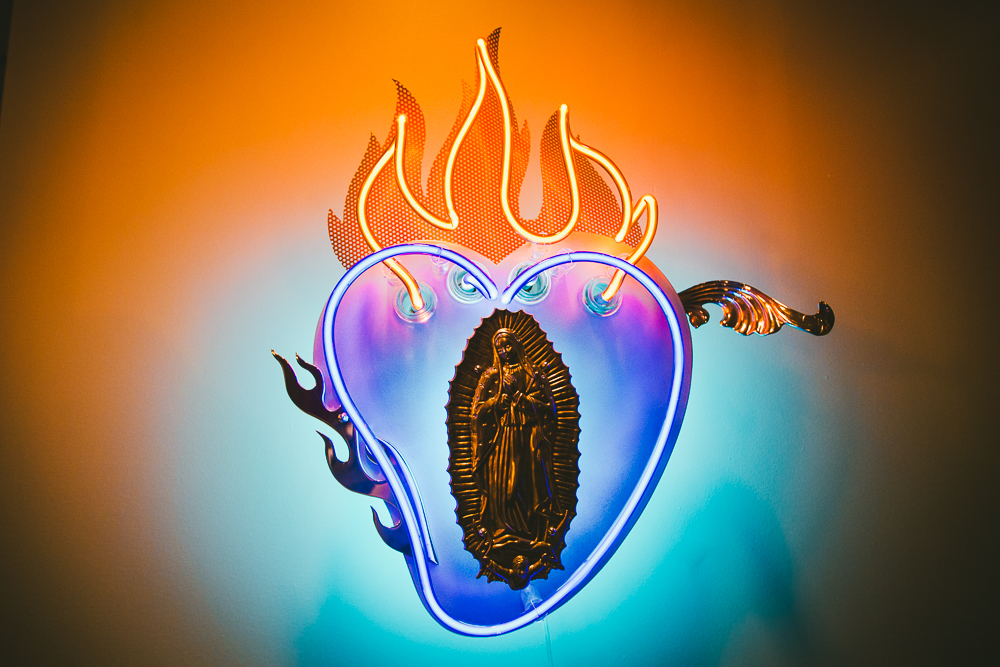 He was filming throughout the length of the show! 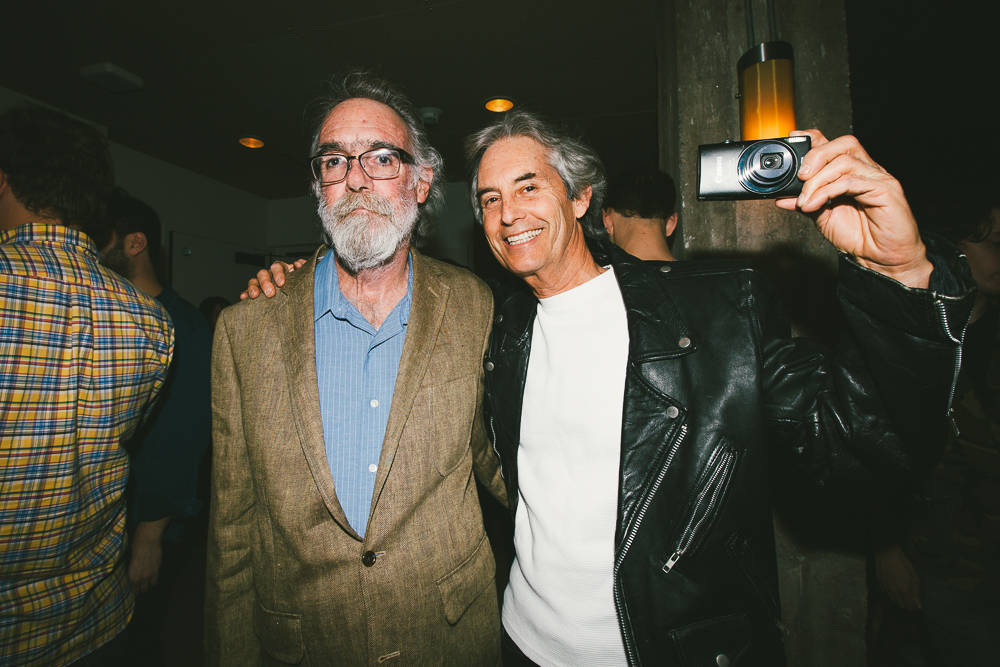 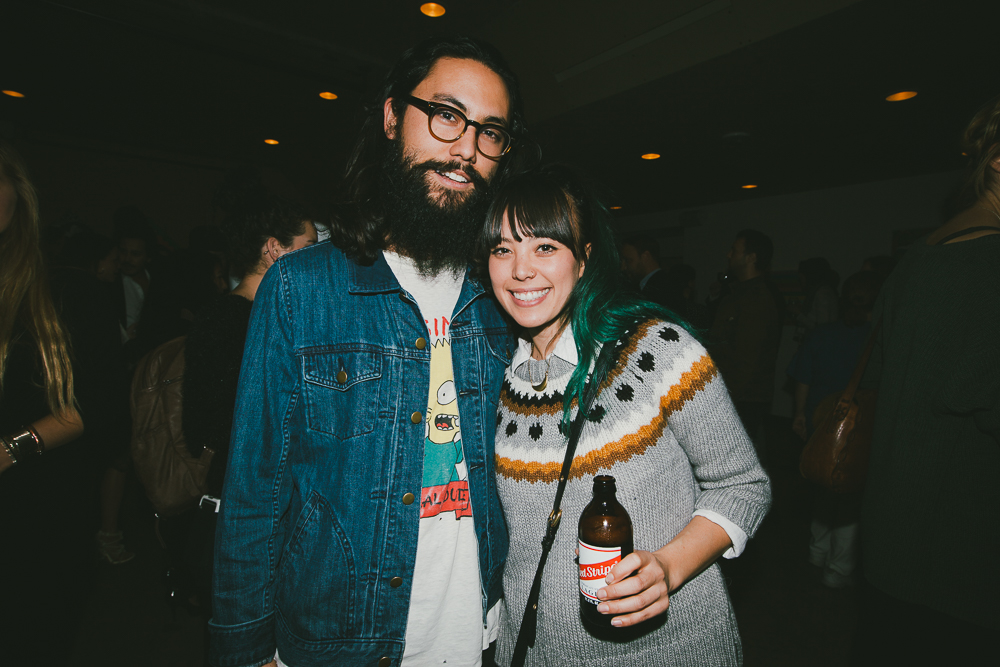 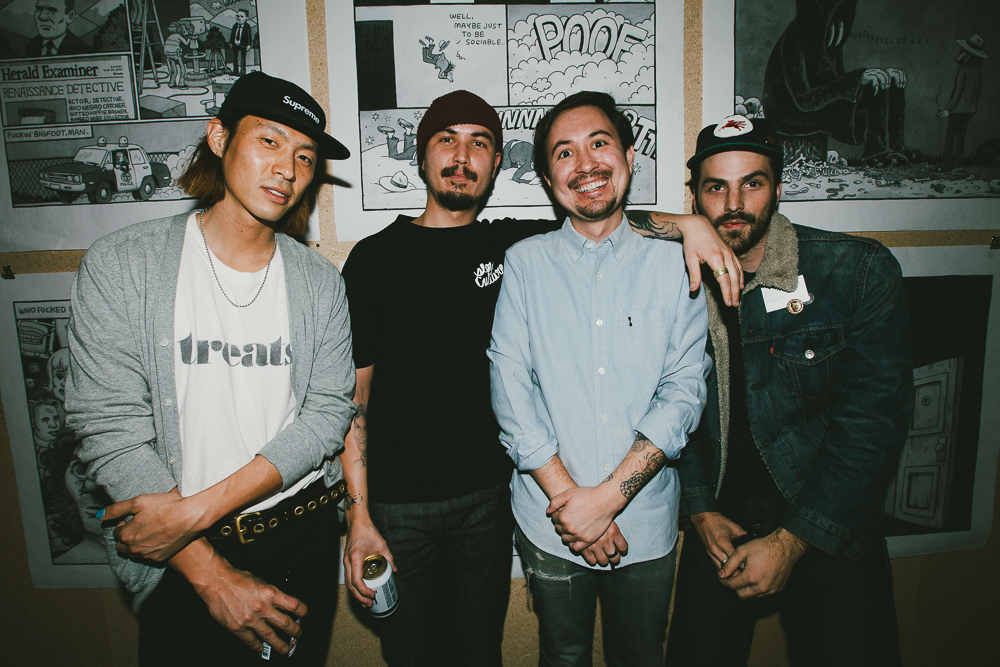 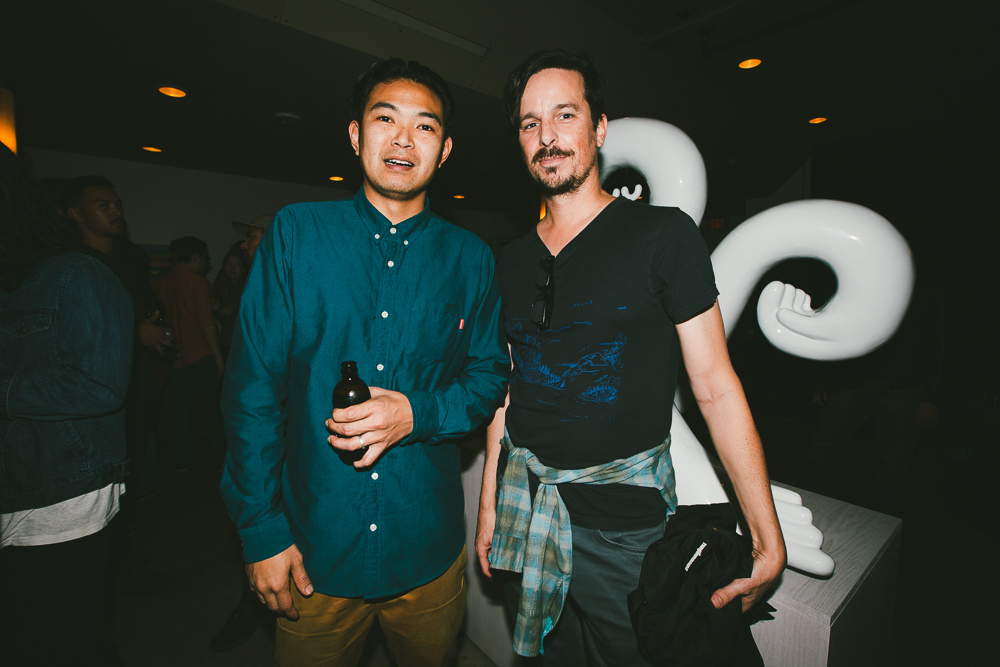 Fred and the legendary Money Mark! I was so happy to spot him. 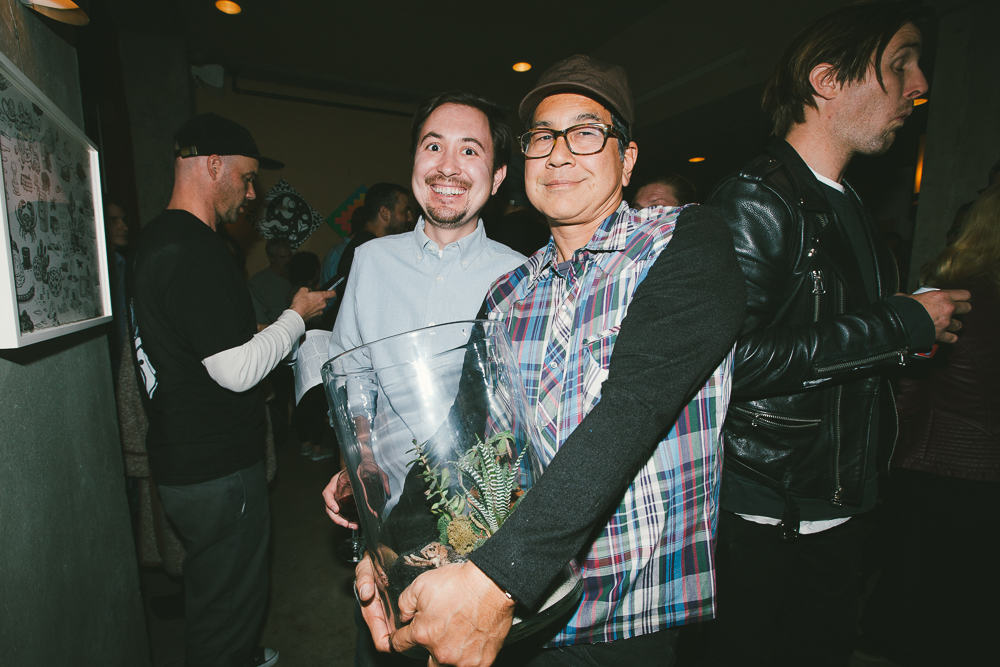 Lakich’s “Vacancy/No Vacancy” (1972). The “no” toggled on and off – made me feel some feels about accessibility and emptiness. 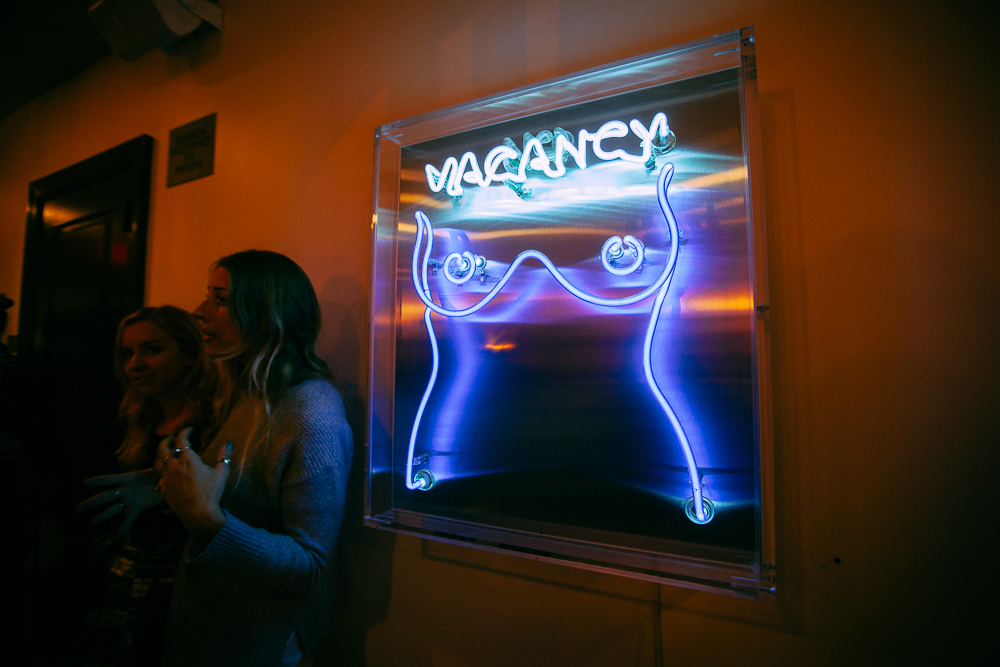 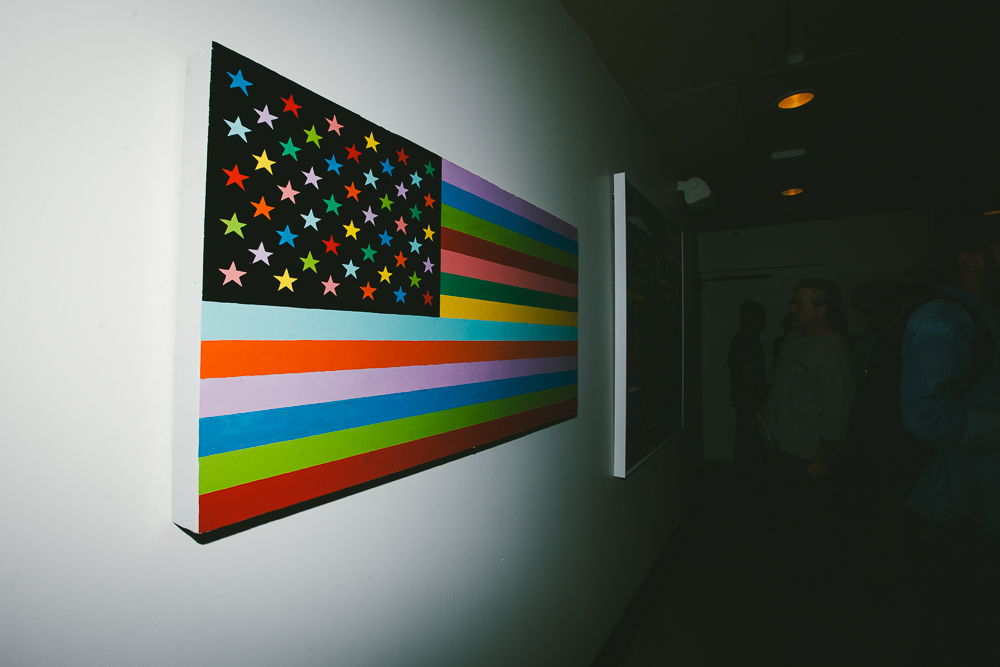 Zach couldn’t get a clear shot of the Haas Brothers‘ “Animal Party” glow-in-the-dark wallpaper and my iPhone couldn’t do it justice either. Below is my iPhone shot of movie poster designer Dustin Stanton‘s “Mornin’ Sam.” “Mornin’ Ralph.”, the dayglo screenprint across from the Haas piece in the black light room. Stanton designed the leggy Inherent Vice movie poster you’ve been seeing. You’ll probably recognize his work from the movie posters for There Will Be Blood, V for Vendetta, The Manchurian Candidate, and my personal favorite work of his, The Master. 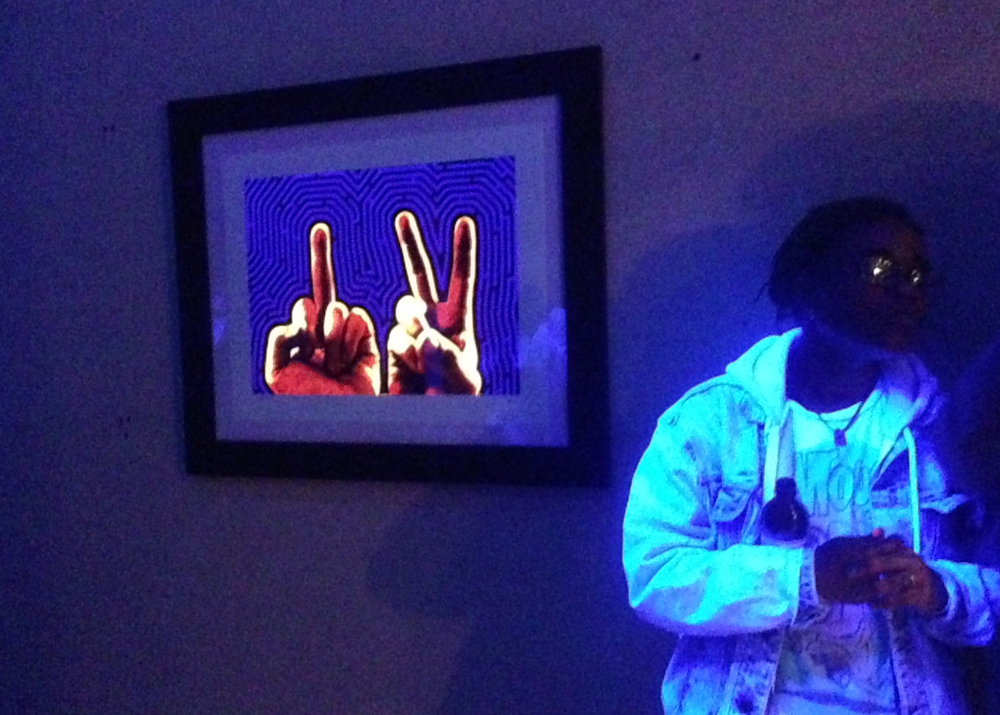 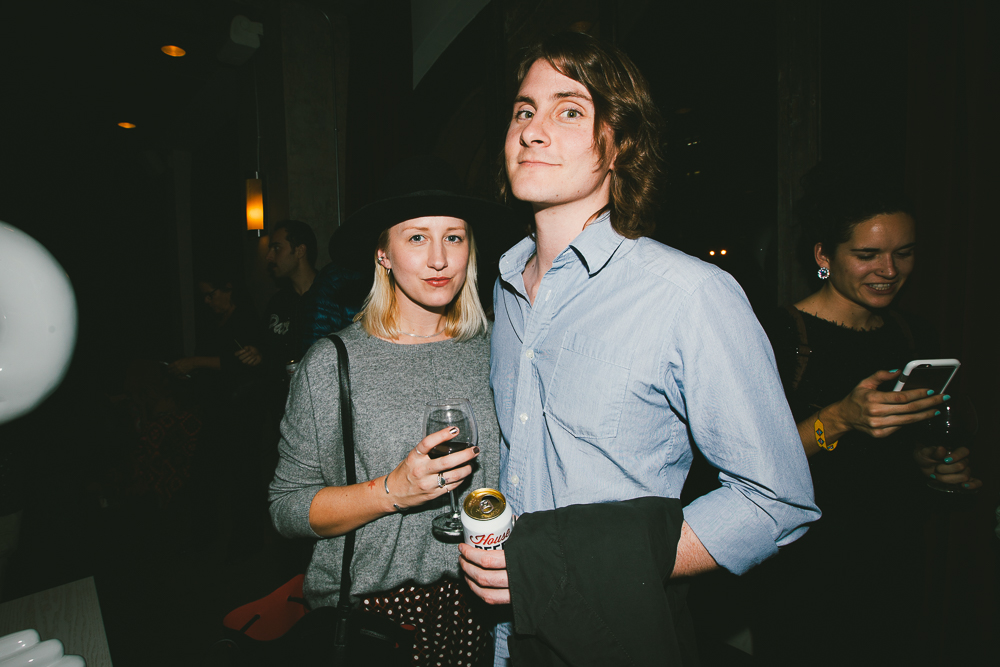 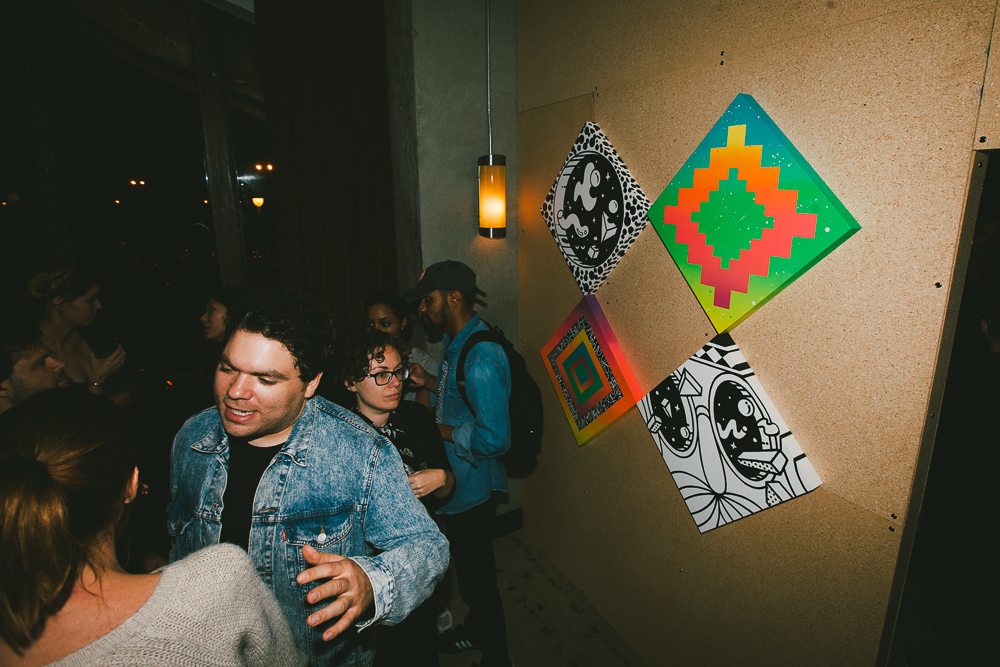 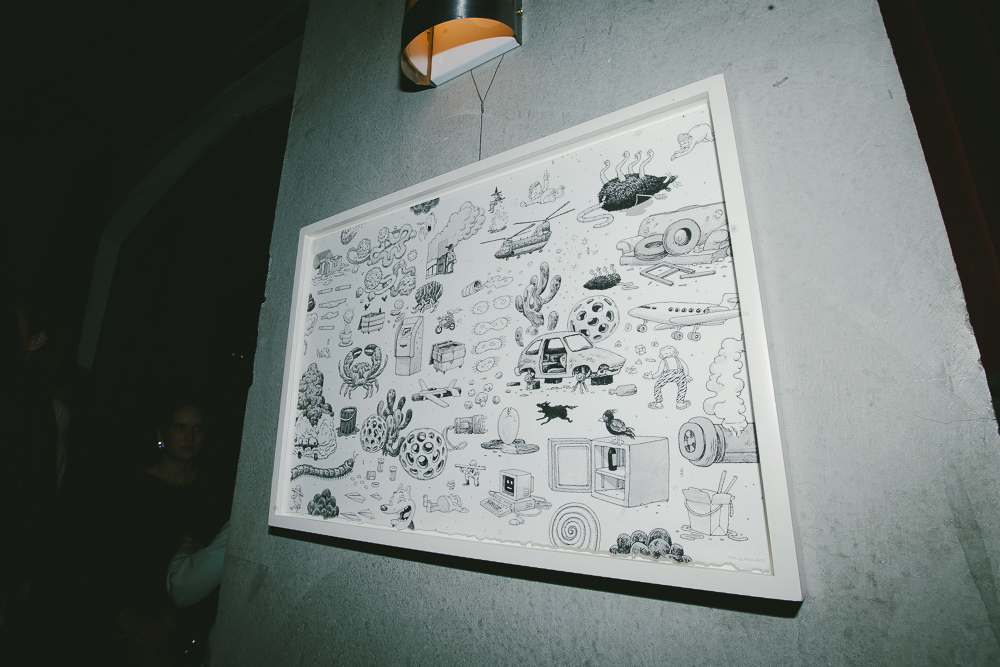 The LA show runs until this Sunday, 1/11 and is free to the public. The Ace Hotel London Shoreditch show, from January 19-25, will have a Joshua Light Show installation set to the Greenwood soundtrack. The New York show entitled What’s The Alternative is currently running until the 11th, and showcases an alternate reality environment immersive installation by Jonah Freeman and Justin Lowe – complete with vintage and found objects, ephemera, art, and props.

Oh, and if you come this Saturday, Travis Millard will be doing “Spirit Portrait Sessions” from 1-4pm!