MAY I SPEAK FREELY? :: MY REVIEW OF CITIZENFOUR

You know that whole Jennifer Lawrence thing?  That Fappening thing.  C’mon.  You know.

Amidst the uncovering of celebrities’ most private moments – the viral orgy that pulsated through the Internet – I couldn’t help but wonder if these starlets were just the first to be pillaged.  If what happened to them and their phones would soon befall the rest of us.  I’ve noticed how courts increasingly dredge up e-mail and text conversations to assemble verdicts, and how readily these confidential exchanges are smeared across public record.  And then I think about how well the Internet knows me, how it can finish my sentences better than my closest friends.  How far away is a future where everyone knows everything about everybody?  Is anything sacred?

If you even remotely follow the news, over the past year, you may have become familiar with Edward Snowden.  I try to keep up with politics and current events to the best of my abilities, but even I’ll admit that his name was always background noise to my cultural periphery, somehow muddling with that Julian Assange guy and an obscure Harry Potter villian.  I didn’t know he was a 29 year old, hacker-looking North Carolinan who took the United States government head on last summer, by betraying all this Top Secret intelligence that Obama & Co. betrayed of us.  Snowden was the one that blew the whistle on how the government tracks of all our steps through a dense spiderweb of phone, Internet, and credit card transactions.  According to Snowden, he lit this fire in a quest for justice; for the people – so they are aware of a post-9/11 United States of America wantonly and flagrantly violating our rights and decimating privacy. 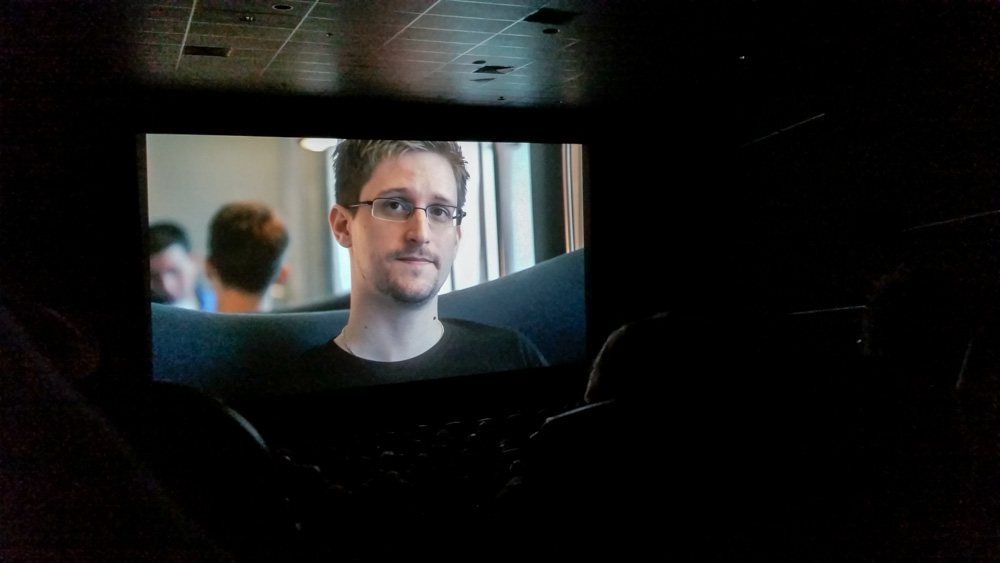 In 2013, Snowden reached out to filmmaker Laura Poitras and lionized journalist Glenn Greenwald to document and bring to light these transgressions.  For a week, they crowd his Hong Kong hotel room and probe the CIA system adminstrator.  They take it to the media and what erupts is absolute political bedlam.  Against an unnerving Trent Reznor-inspired soundtrack, paired with Snowden’s harmonic speech, Citizenfour shows how one person, in such simple circumstances, can steal the world’s attention.  And how little we know about how little we know.

It’s weird.  As compelling as Citizenfour was, and how urgent the material, I also felt disaffected that I was experiencing these revelations in a movie theater smelling of buttered popcorn and old people.  If we are to take this information seriously – which, I’m assuming was Snowden’s and the filmmakers’ intent – then why choreograph the discord, why color the broadcast with a dramatic lens?  It’s like watching the evening news with anchors played by actors.  You’d still get the vital information, but how sincerely would you ingest it?

I think the big issue here is one of Freedom vs. Security (I designed a T-shirt about this once, actually).  It’s the unwinnable tug-o-war between how much liberty you expect from a democracy and the extent of safety.  You can’t have both.  And in the years since 2001, Americans have willfully surrendered their most basic freedoms under the veiled promise of security.  But there’s this one guy (totally forget his name or what he did) near the end of Citizenfour that highlights the central concern, which is “What is the point of free speech if we don’t have privacy?”  He brings up the chilling effect that this invasion of privacy has – and will have – on our communication and pursuit of knowledge.  For me, this rings loud and clear, as I edit my email and texts in consideration of who else may read them, think twice about my Google searches in case I ever run for President, and even as I write this thinkpiece, worry about what watchlist I may end up on.  And then I realize that what happened to Jennifer Lawrence is already happening to me. And to you.  It just hasn’t hit the audience we care about…yet.