Keep Shouting 'Till They're Listening :: My Interview with Chris Gethard

Last year, during a trip to New York City for business, I was invited to attend a live taping of The Chris Gethard Show, a regional public-access staple I had heard about for years, but could never watch while living on the West Coast. Because I knew Chris was a comedian, I deducted it was a talk show of sorts, but knew almost nothing else about it. The show is now produced by comedy heavyweights like Zach Galifiankis, Will Ferrell and the brain trust at Funny Or Die, so that alone should get you to tune in. I accepted the invitation, excited to see something I had heard rumblings about for years, but quickly realized I wasn’t only in the dark about Chris and his genius, I was completely missing out on one of the most magical things currently happening in comedy.

Walking into the ragtag tax-funded MMN studio, I had no idea what I was getting into. As the show started and the house band began to play, Chris welcomed the audience all sitting Indian-style around him, and the group spontaneously broke into a chant of “Eat More Butts,” an obscure and inside joke from the prior week’s show that would mean nothing to someone just tuning in for the first time, and more importantly, me.

Oh, one more thing about the “Eat More Butts” chant: it went on uninterrupted, halting any actual planned format for 15 MINUTES, about a quarter of the show’s duration. And despite being in the dark about its purpose, and it going on and on to the point of absurdity, I couldn’t stop laughing. But to explain what Chris Gethard has been doing for the past decade is almost as difficult as explaining why “Eat More Butts” was so hysterical. It’s easier to just say—no matter what it is—he’s done it all himself.

Right before Chris decided to stay up for 36 hours straight and host his show, now on Fusion, a network that may be difficult to find on your cable box but is easy to find online, I was able to send him over some questions and talk about his arduous journey and organic philosophy for comedy. Enjoy his wisdom. 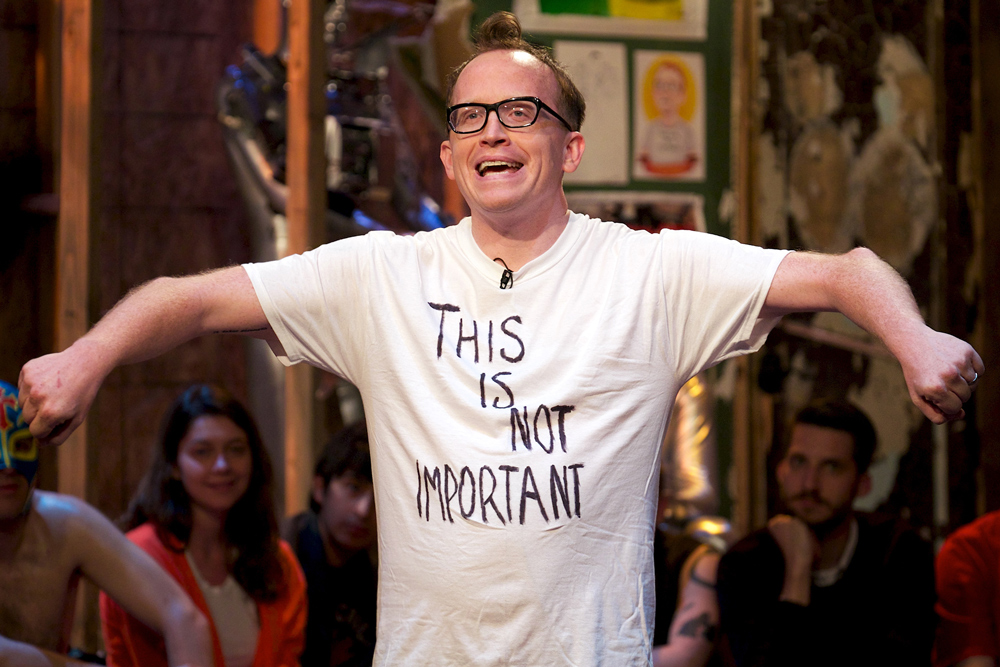 JENSEN: I can only imagine the amount of work you’ve been putting in to get this show moving; how are you personally feeling right now?
CHRIS: I’m exhausted and overwhelmed and very much stressed out. But more importantly, I’m happier than I’ve ever been in my entire life.

TCGS is difficult to explain to anyone who hasn’t seen it. When you get the dreaded question from like an aunt during the holidays, how do you explain the show?
I very vaguely say, “It’s a talk show.” And then when they say, “Oh, so you tell monologue jokes and wear a suit and do celebrity interviews?” I say, “No, I do none of those things.” And then they say, “So how is it a talk show?” And I say, “Exactly.”

More than any comedian I know, and arguably ever, you’ve been almost solely Do-It-Yourself your entire career, answering to almost no one. What have been the advantages to this method compared to your friends who’ve had to bend and curve based on network or studio notes? Disadvantages?
Some of the disadvantages are obvious—I’m poor and more stressed than I’d have to be if I directed my energy towards things that are established and lead to bigger things.

The others are a little more theoretical. By taking all the freedom, you also have to install your own discipline. What I mean by that is that answering to no one is a great, great thing, but you have to hustle ten times as hard to honor your audience at that point. I think sometimes people think freedom means things are easier, but I’d argue that when you make a grab at freedom in the DIY sense, you aren’t rejecting oversight, you’re adding it to your own plate and that requires a lot of hustle and a lot of objectivity and a lot of internalizing stress.

“I THINK FAILING IS ONE OF THE MOST INTERESTING THINGS AN ARTIST CAN DO IN PUBLIC.”

The advantages are that I can actually do things creatively that I want to do. And with the way my brain works, I don’t think that would happen if I did it under anyone else’s umbrella. I like experimenting too much. And actually, I enjoy FAILING too much. I think failing is one of the most interesting things an artist can do in public. But people who throw money around and fund things, they aren’t into failure so much. They much prefer success. When we succeed, we succeed big. But that’s only because we’re willing to fail huge. So I get the freedom to do that.

We have the show on Fusion now and over 20 people who worked on the public access show for free now have jobs through it. That’s rad to me. That’s because we went the DIY route. We earned the right to stick together.

Back in 2013, Comedy Central, a network that eventually would pass on producing the show, first ordered its pilot. I know you admitted to being depressed after the decision. How close were you stopping all together?
I’ve almost stopped the show on about half a dozen occasions stretching back to our days as a stage show. The inspiration to keep it going has always been via someone saying something or stepping in without knowing it was hitting me in the gut and giving me the motivation to continue. I remember fan emails that came in thanking us for the show right at a time when I was going to end it. And being struck by them had me realizing it would be selfish to shut the show down at that point. The first time I went on Conan O’Brien’s show, I was really not sure how long I could keep it going and he was so encouraging after the show that it kept me going for years. During the commercial break, he looked me dead in the eye and said, “You have to keep fighting for this thing. It’s cool. People aren’t going to want to listen. You have to make them.” And that was coming from one of my heroes and it was an insane motivator.

In the first three Fusion shows, you’ve had on Abby and Ilana from Broad City, Wyatt Cenac, and Seth Meyers as guests, but the allure of TCGS, for me, has always also been in your oddball cast of audience characters. For those who’ve never seen the show, can you explain what is going on around you?
Well, that’s really rad that you say that. That’s what I always liked about the Howard Stern Show growing up—there were all the gross out stunts and crazy things, but at the end of the day, what was good about the show was when Howard and Robin would make fun of Fred or when Baba Booey would do something dumb and they’d spend forty minutes criticizing him on the air. It’s the friendships that make it addictive and we’ve tried to steal that.

I think basically the family of the show is a bunch of people who don’t necessarily have an easy slot in the entertainment industry, teaming up for this underground show. I’m the host, but I’m full of anxiety and depression. Shannon’s like the Ed McMahon, but she wears a hoodie and talks shit and never backs down. Murf is our announcer and he has a past with drugs he doesn’t hide. Bethany handles all our interactive elements and she’s this tiny asthma-stricken girl. Mimi hula-hoops in the background—usually if you heard, “A lady hula hoops in the background,” you’d think it referred to misogynistic eye candy. Mimi treats hooping as a religion and is a little older than women who you get to see on TV in that capacity normally. I’m proud of that. All the regulars wear their uniqueness and, in many cases, their scars on their sleeves.

So that’s the core on-camera group and I think the audience surrounding it has identified with that and that fills out what’s going on around me. The studio audience is on-screen and a lot of them identify as outcasts too. They don’t look like cool kids, they look like real people. And a lot of them are creative and wear masks and outfits. I think our show ultimately is a place where people who don’t really fit in elsewhere, either via the hand they were dealt or because they’ve chosen to opt out, they can all get together and take a breath and feel like they’re winning for one night a week. 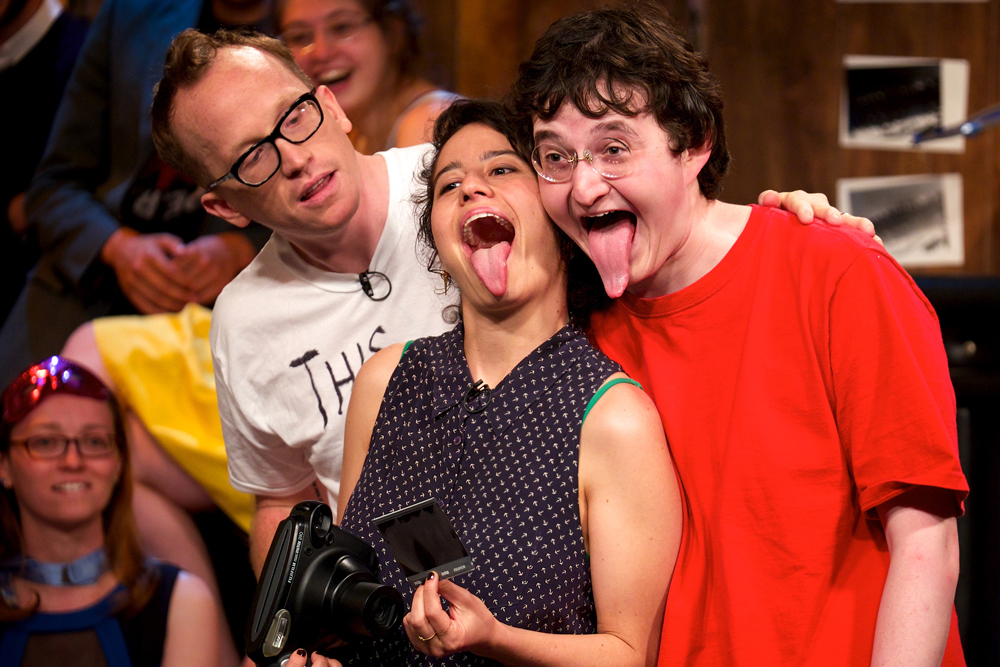 Another amazing aspect to TCGS is your musical guests. You’re having on musicians that other programs wouldn’t even know exist, from Open Mike Eagle to Wheatus to Screaming Females. What are you looking for when booking these musical acts? And do feel you have anything in common with them?
I think we have the best bookers in the game. Heidi and Zane and Kiri go to shows all the time and really know what’s going on in the world of underground music. When we’re booking acts, I think we’re looking for people who are really doing something unique and doing it their own way. When there are hardworking, interesting artists out there, if we can use our TV platform to help spread word on them, I am way into that.

I think what we have in common with the musical guests, what we really click with is that when you do something in your own voice, it can make you feel kind of alone or drifting out there. Like not many other comedy shows are hanging from the ceiling dressed as ducks letting the audience shoot at them with the camera as a gun. It’s a weird thing to do. I think despite the differences in our art, a lot of the musicians see themselves in our mindset and we feel the same towards them. The punk bands in particular—most of these bands go out on the road, play people’s basements, sleep on floors, and they’re just trying to get their message out. The theme song of our show includes the phrase “Keep shouting ’till they’re listening” and I think that’s a thing the musicians and our show really link up on.

You’ve become this testament to being an independent comedian, even staying in New York when most of your pals have made the trip out to LA full-time. If there’s someone out there who’s looking to start a career in comedy in their own lane, what is your advice?
I think the main things are: 1) Be honest with yourself about your talent. You really have to decide if you have what it takes. 2) Be honest with yourself about sacrifice. Are you ready to not live that well for a long time? You have to. There’s no way around it unless you’re extremely lucky. And most importantly: 3) Can you decide to just not quit? If you make something that you are really proud of, that you know is good, but the world never sees it or appreciates it, are you ready to fall on the sword and just make it anyway and stand by it and hold your head up high? Can you keep going when facing the fact that the world isn’t listening?

If all the answers to that line up, you can probably make it.

"We’re All Fucked, I’m Out" :: The Hilarious Zack Pearlman Gets Real