Guess where I am today? (HINT: TACO BELL) 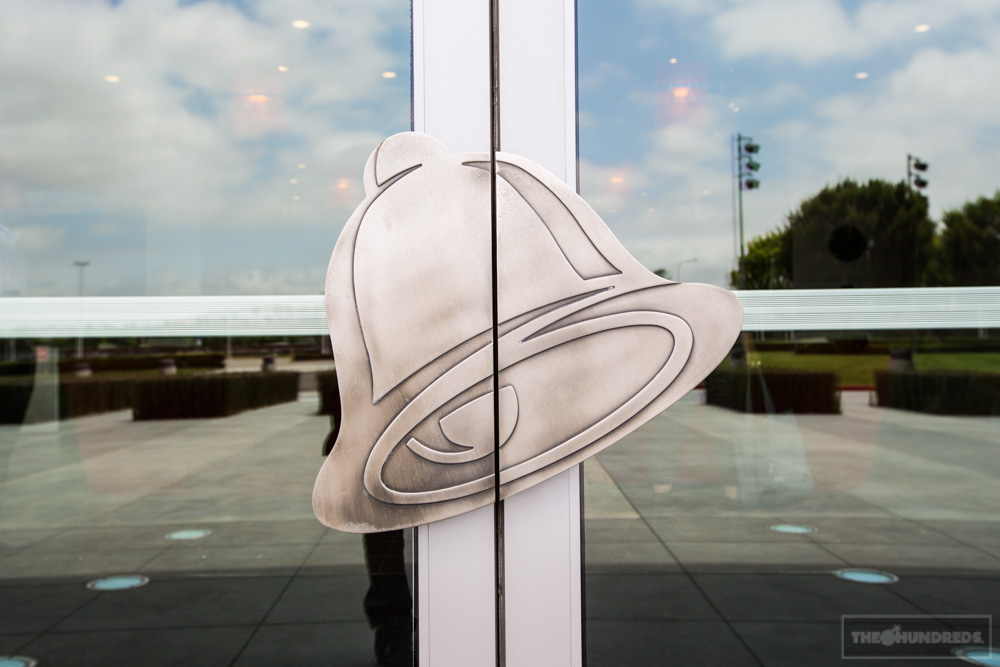 Taco Bell is a wildly famous Mexican-themed fast-food chain with 6,000 restaurants strewn across the States and abroad. For much of the world, it’s maybe their only experience with Mexican food but if you grew up in Southern California like me, you consider Taco Bell essentially its own food category. Warm cheesy Meximelts, flaky crust Mexican pizzas, those little Nacho trays with the melted-cheese cupholder, this was everything I lived and loved about Taco Bell as a youth. After a bag of cinnamon twists and 3 Taco Supremes, I basically looked like their o.g. (maybe PC-questionable) mascot Taco Boy and I’ve kept his hairstyle to this day: 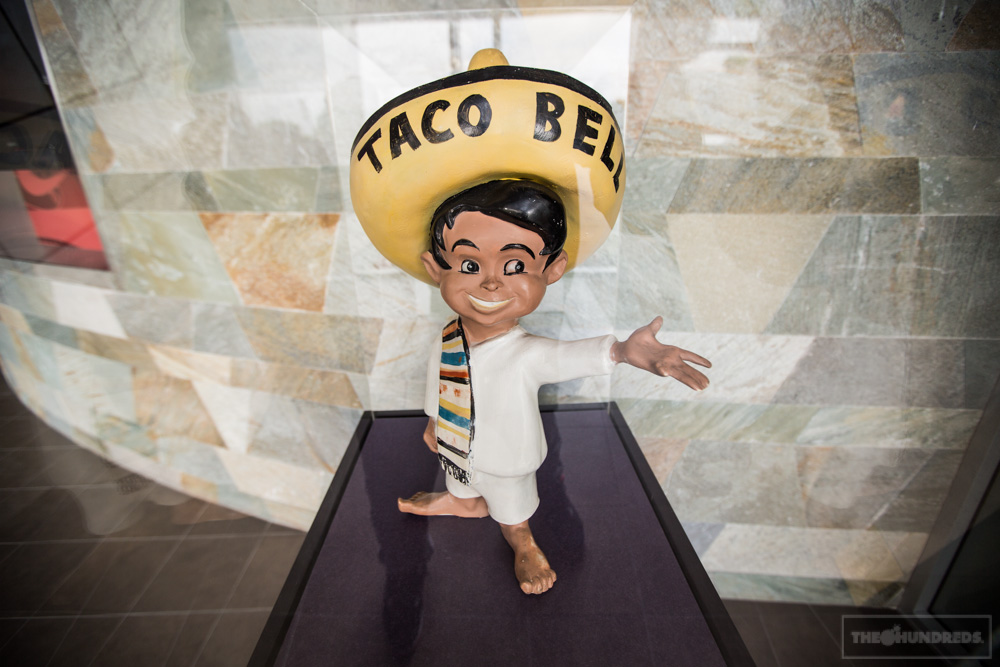 I’m waiting in the lobby of Taco Bell headquarters in Irvine, California. Located directly across from the Spectrum and around the corner from most major action-sports brand offices, the moment you walk through the doors, you get broadsided by the sharp smell of Taco Bell spices and fried tortilla-shell grease. I asked the receptionist if it smelled like this all the time and she responded, “I used to be able to smell it but now I can’t anymore.”

I thought long and hard about stealing this Taco Bell throw-pillow while sitting in the waiting room but then I decided against it because that would be immoral (and it would clash with my Chipotle sofa). 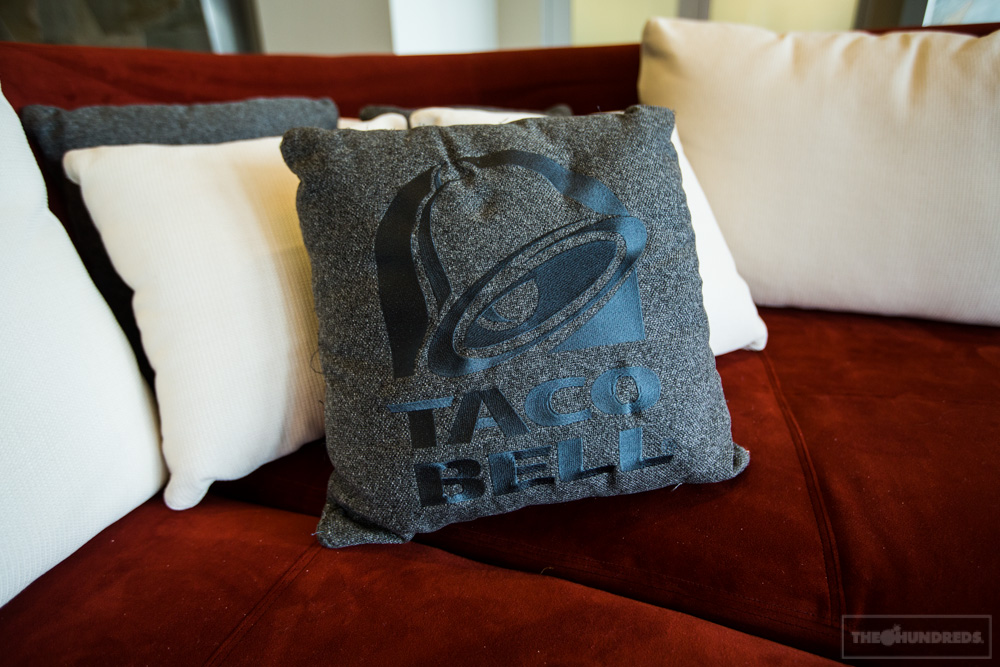 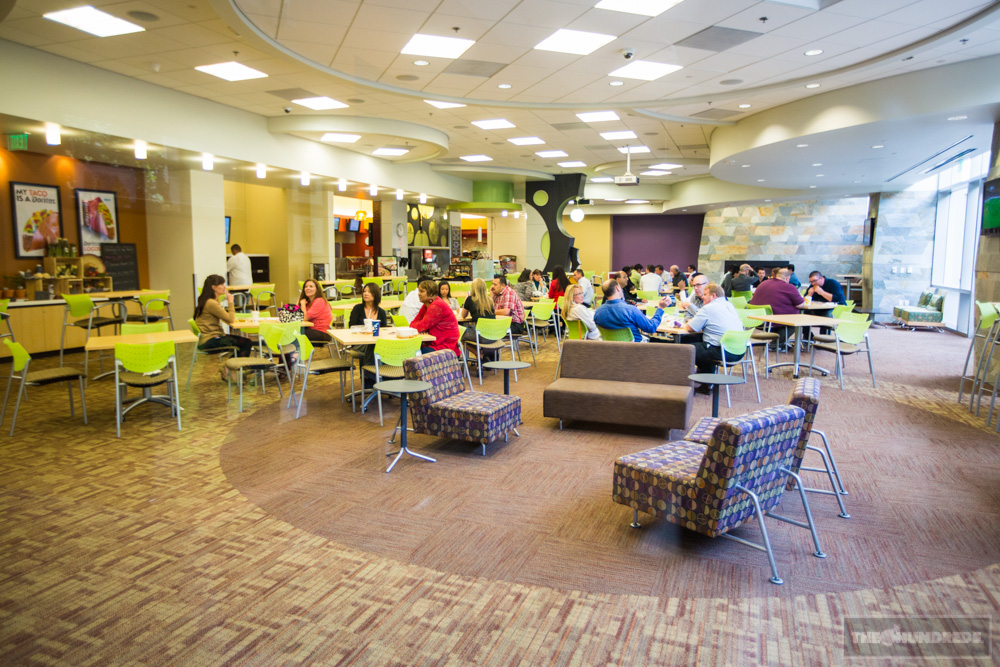 Guess what’s for lunch? Long John Silver’s! Just kidding, it’s TACO BELL. Nothing special on the menu outside of what you’d find at your local TB’s. Was hoping to find something special like a deep-fried chocolate and peanut-butter empanada! 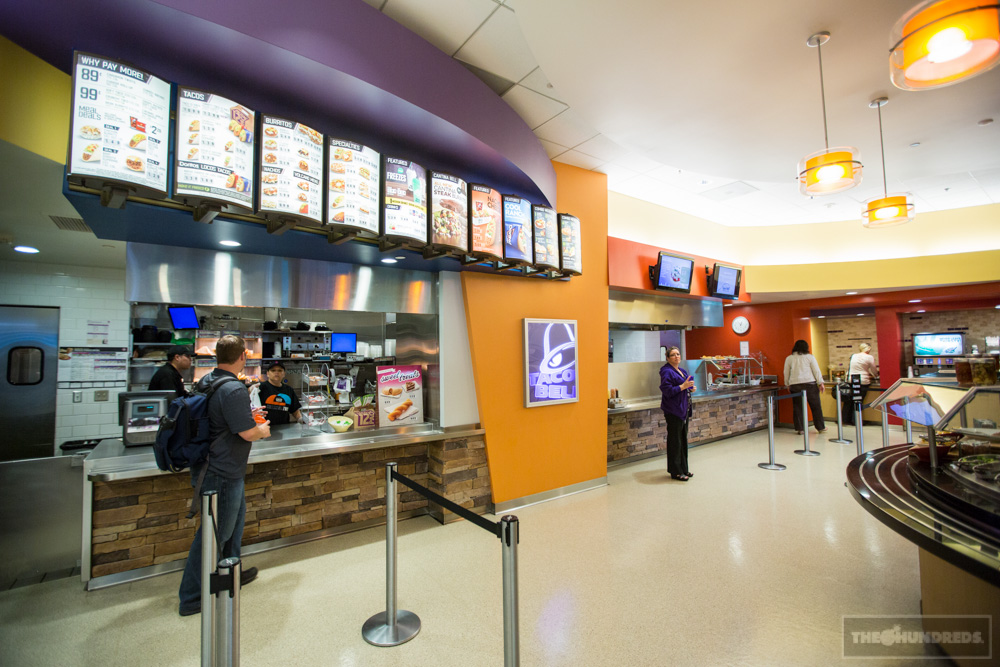 Work off that Chalupa guilt in the Taco Bell gym, you Gordita! 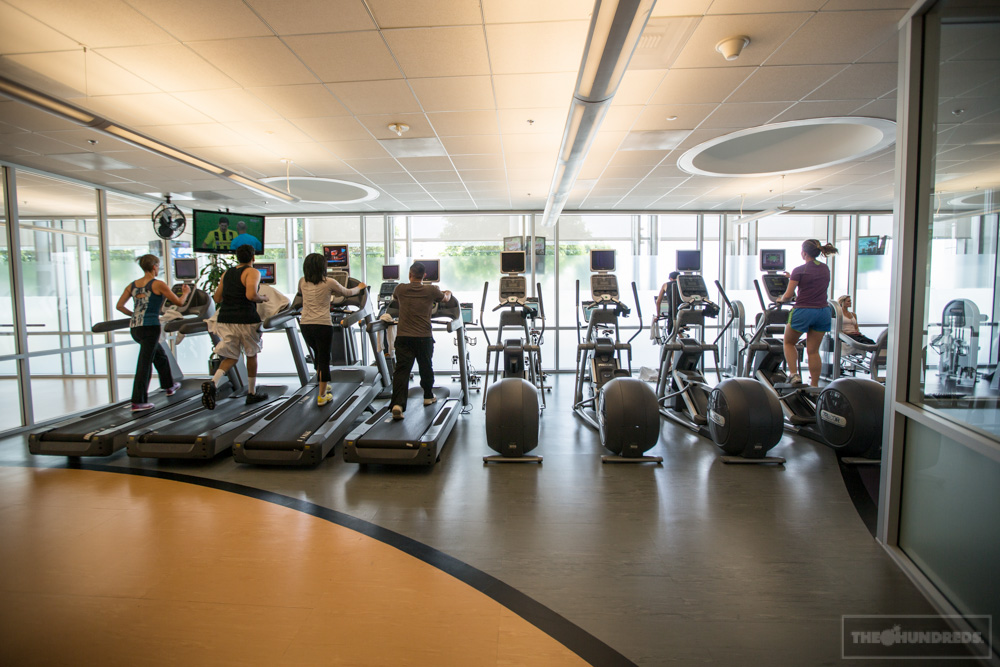 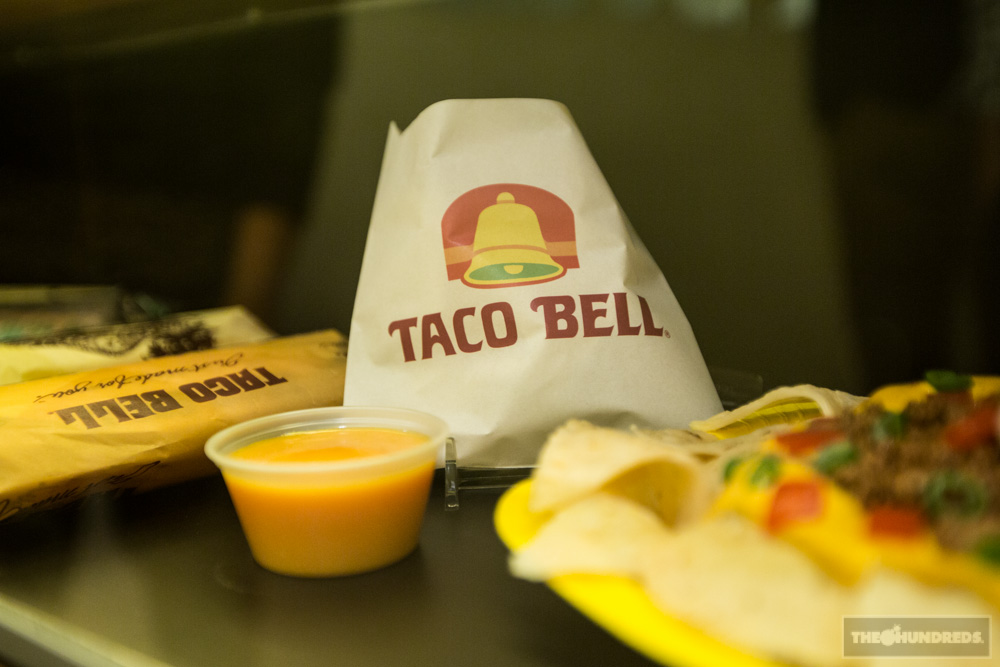 So this is the BAWSE right here, Glen Bell. Betcha didn’t know that Taco Bell was named after Taco’s dad, Glen. And I also bet you didn’t know that Glen Bell grew up impoverished, went to high school with the McDonald’s brothers, peeped game on what they were doing with their burger stand, figured he could retweet the idea but with mass-produced tacos for the migrant workers out in San Bernardino, and ended up creating a fast-food empire. 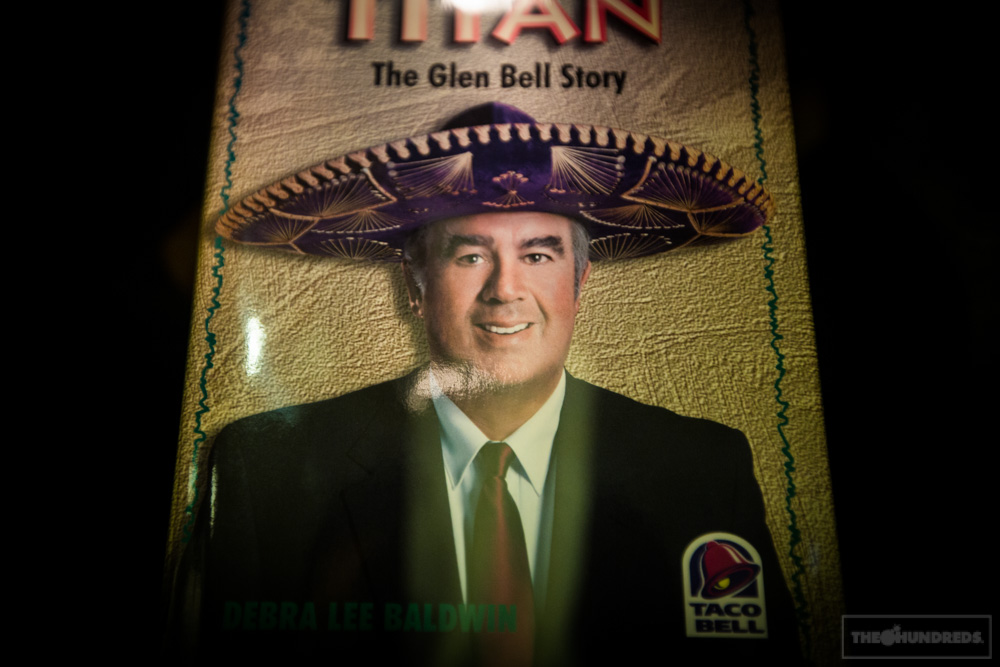 Here’s an example of Glen Bell’s genius. The steel rails by which cooks could stack taco shells and expedite the stuffing process. Bell noticed that it took local taco stands up to 10 minutes to make a taco, but with this invention, he could rifle ’em out. 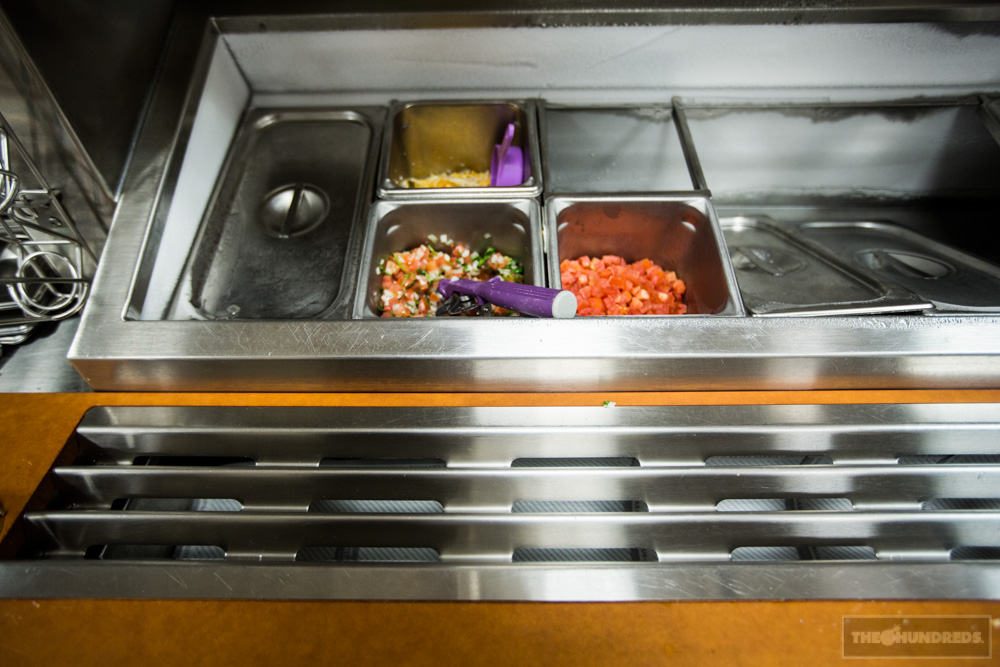 We’re in the nucleus now: The kitchen. Let me start this off by disclaiming that no one is allowed in here. I’m not even sure how I ended up inside the secret command center of the Death Star. They don’t give tours of the facility and you’re certainly not supposed to bring a camera in here, let alone take photographs of what they’re doing, let alone blog about it for Streetwear points.

These chefs and food chemists have a fascinating job. I watch them literally throw together this sordid affair of food ingredients to concoct new recipes and menu items for the empire. They test and taste and think and talk and walk around and ponder some more, then sprinkle in some Doritos and molecularly biologize until they end up with that next big thing. 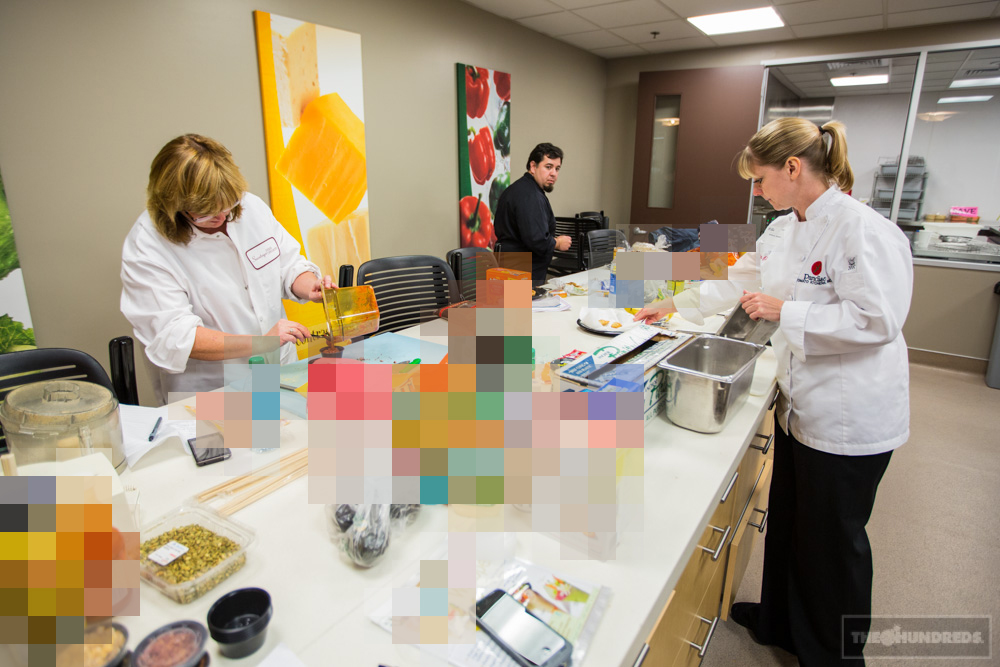 This guy’s trying out a deep-fried… chocolate and peanut…what is that? IS THIS REAL LIFE????? 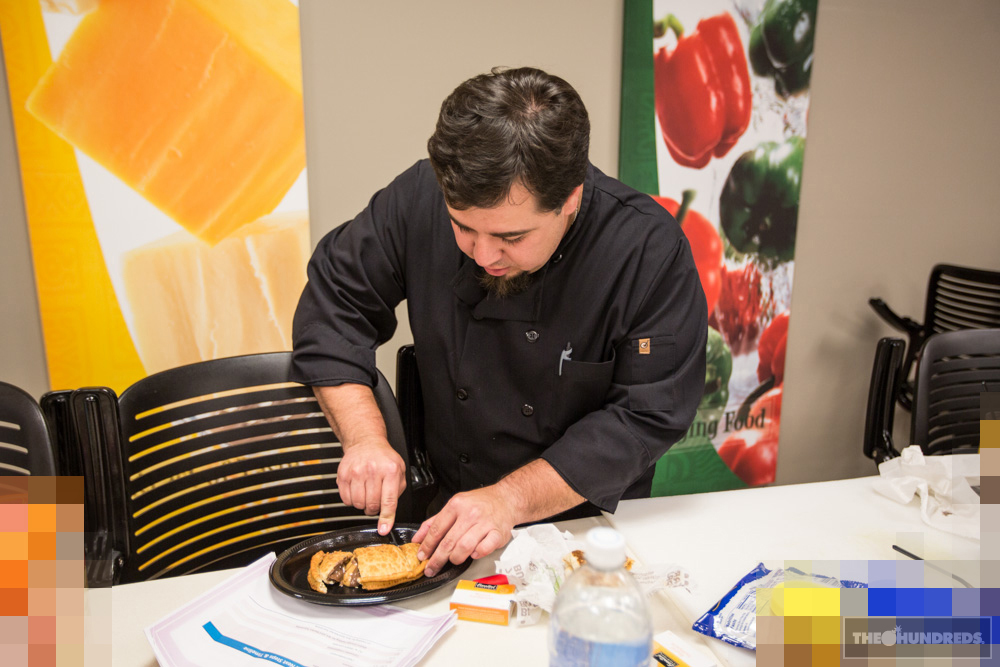 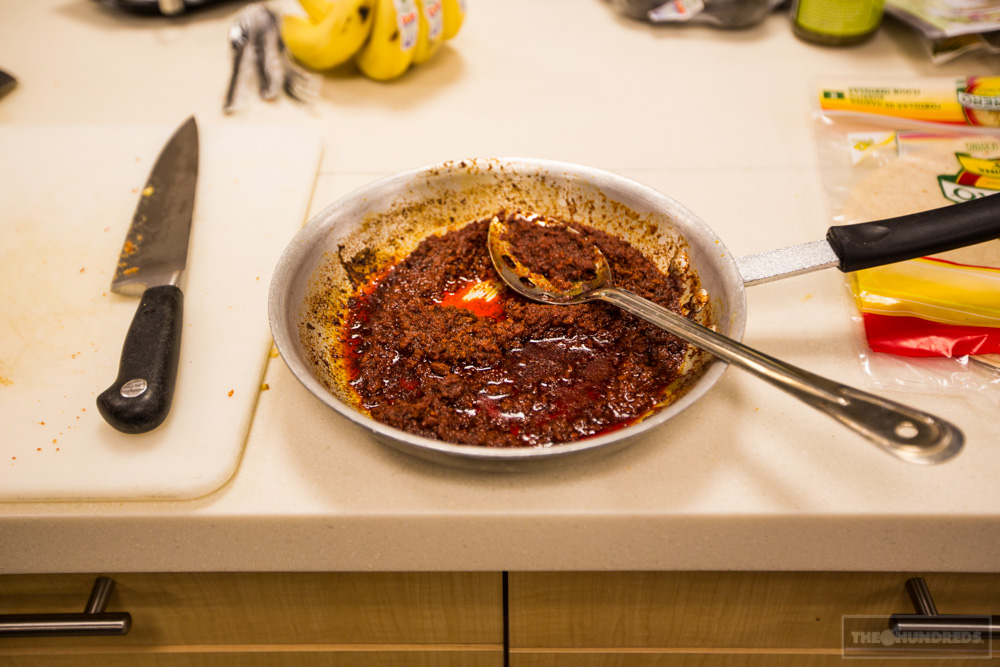 How do these people go home every night and eat normal food? Think they prepare a light pasta dish and halfway through, freak out and dump a bag of Corn Nuts all over it and drown it in strawberry smoothie? 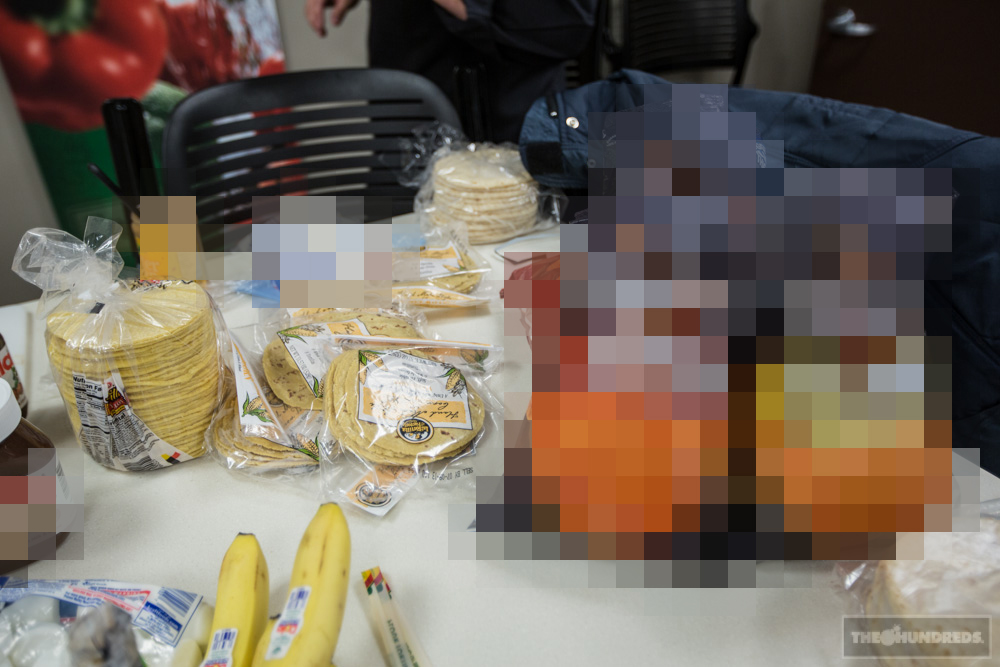 Now this one I was specifically requested not to show, because it is probably going to production. It was pretty crazy: the first ever Taco Bell pixel taco. 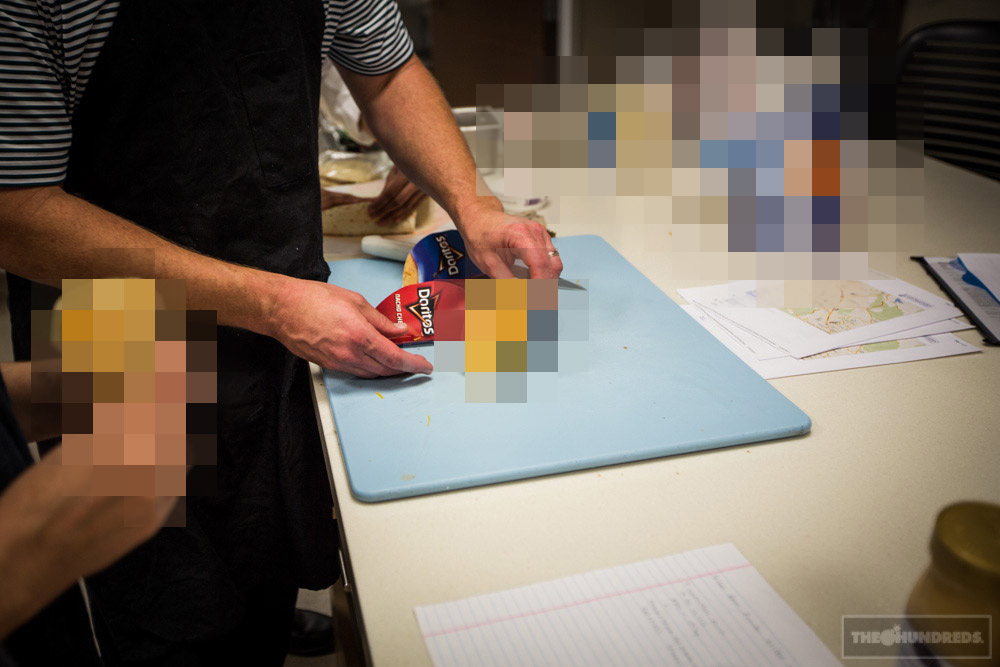 So right on the other side of the kitchen wall are these taste-testing stations. Volunteers sit at these cubicles and receive mystery entrees through those windows to experiment and opine on. 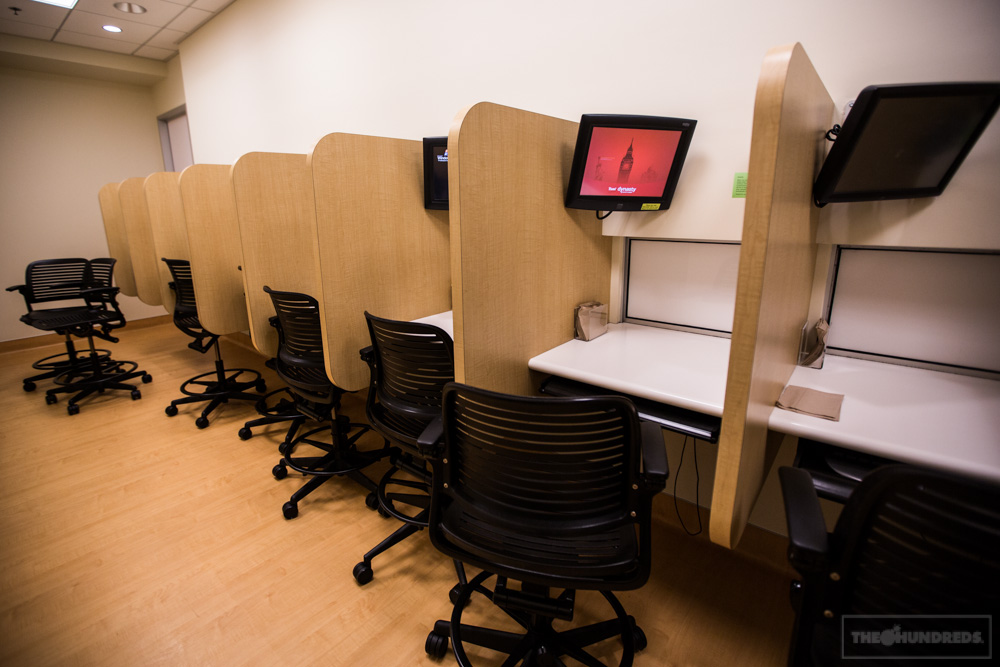 The camera records their facial expressions as they eat the food. It’d be fun to sit for one of these and laugh maniacally through a burrito. 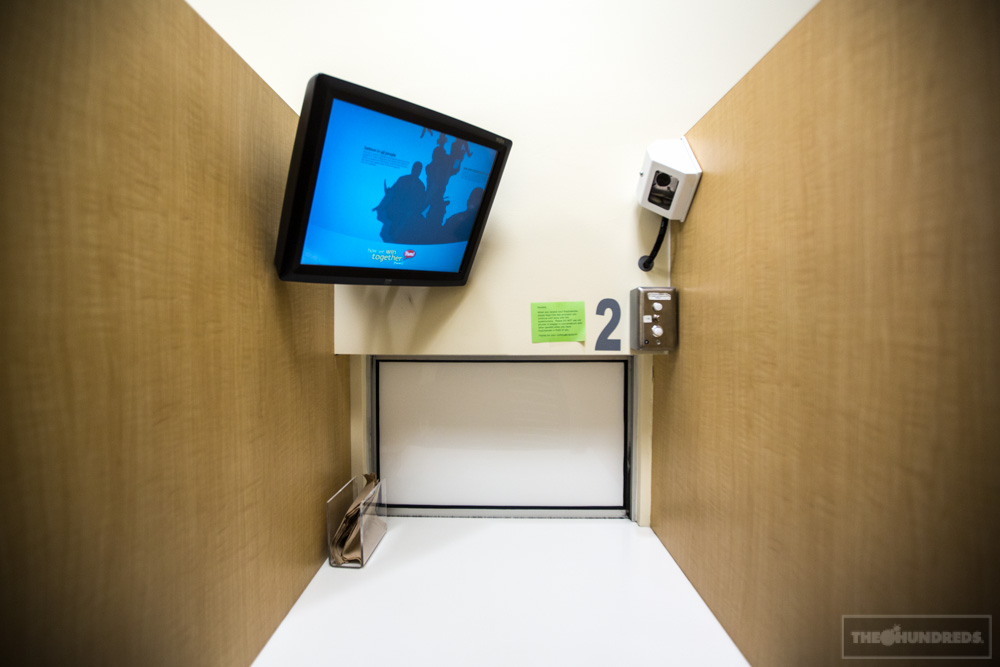 In this classroom/studio space, they’ve installed a state-of-the-art Taco Bell kitchen, not unlike those found at your neighborhood location, to test the practicality and efficiency of creating the new products coming in from the testing lab. I can’t blog the wall behind me, which had lists upon lists of new concepts for Taco Bell menu items (like astronaut ice cream quesadillas and fish taco cereal)(Just kidding, that’s something Burger King would do). 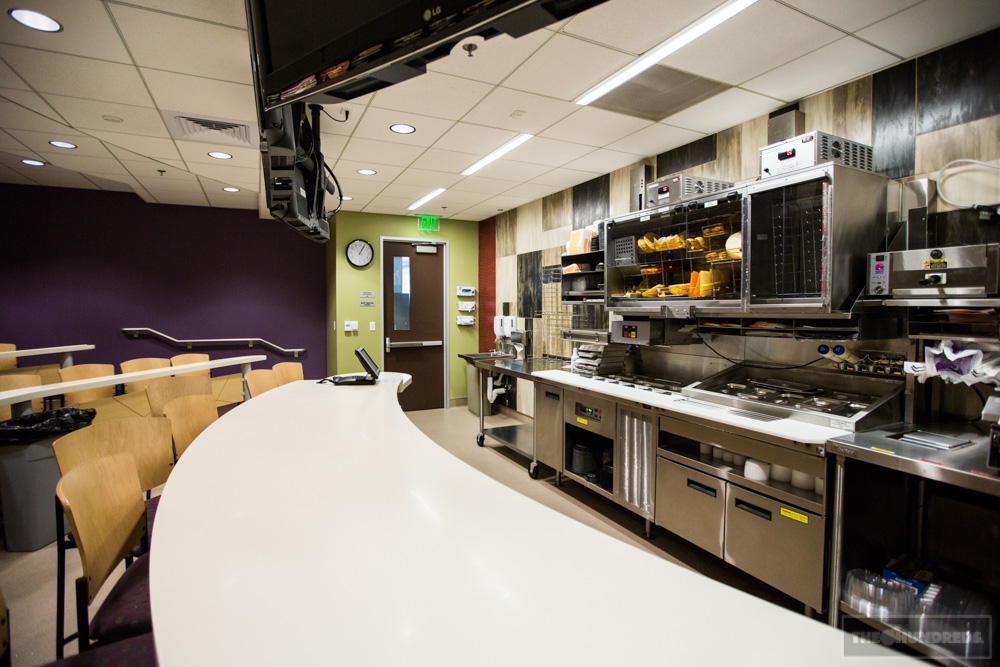 By the end of the afternoon, I couldn’t smell the Taco Bell scent anymore. I guess that means I’m finally home. 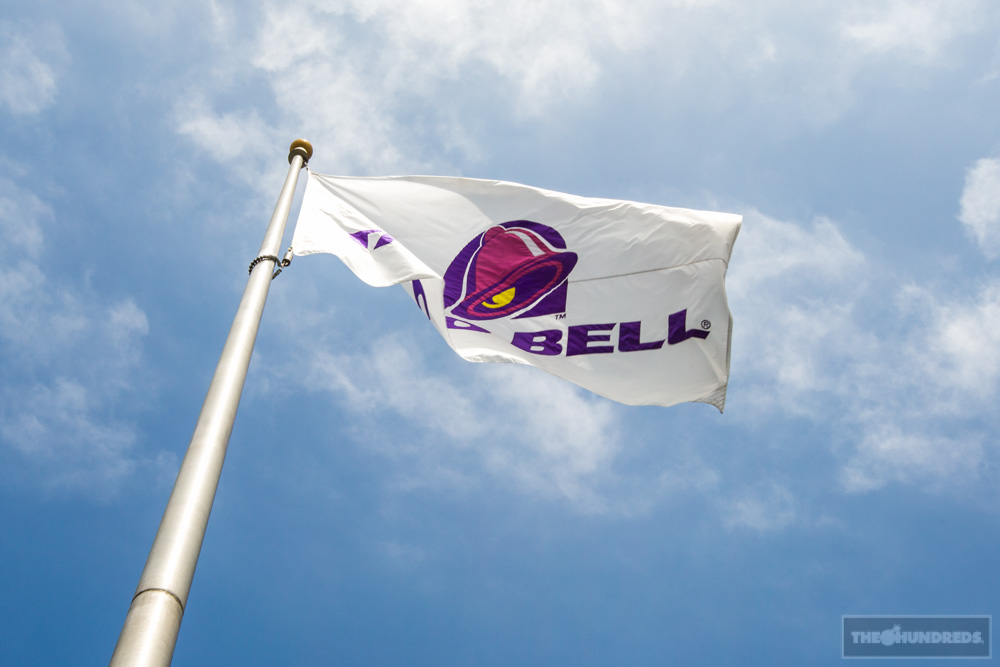